Day 33: A Relaxing End To Tassie

We got a relaxed start, packing up our tents for the final time in Tasmania. Since there was rain in the mountains, and we wanted something relaxed today, we decided to head to Bruny Island, about 30mins from Hobart and a short car ferry ride over. It was the perfect fit for how we were feeling. Just something simple to close things out in Tasmania. 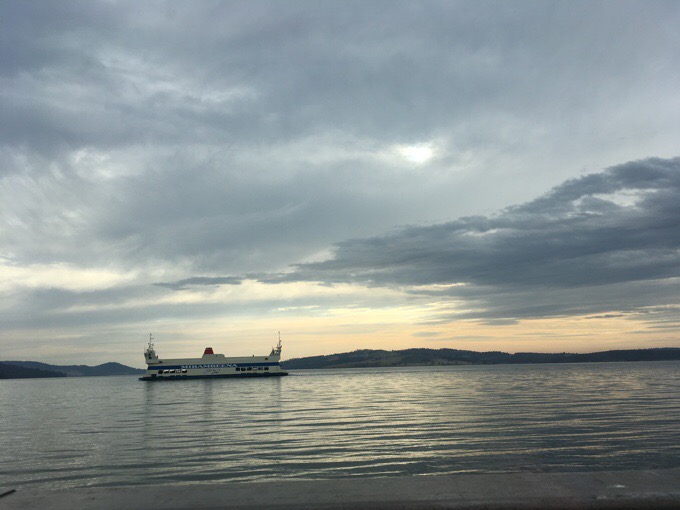 We did two short hikes. The first was Fluted Cape, a 6km/3.6mi loop that went up on coastal cliffs. It was relaxing. 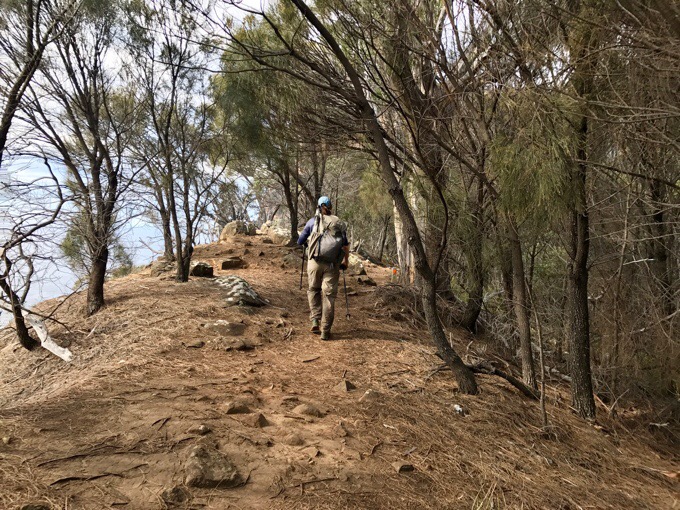 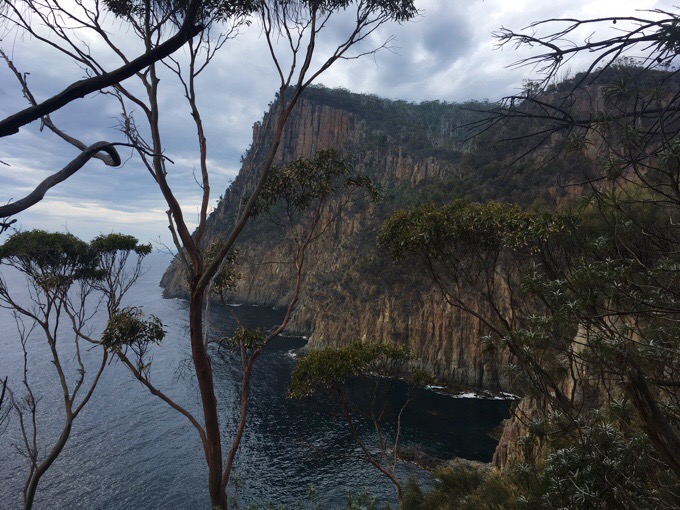 The view of where we’re headed. 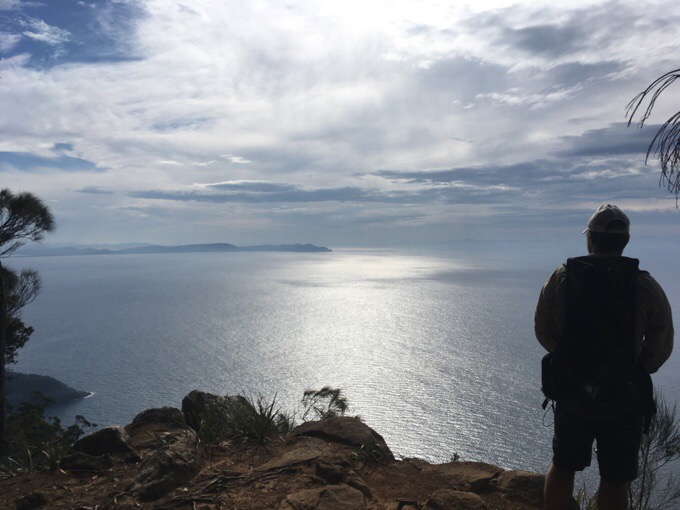 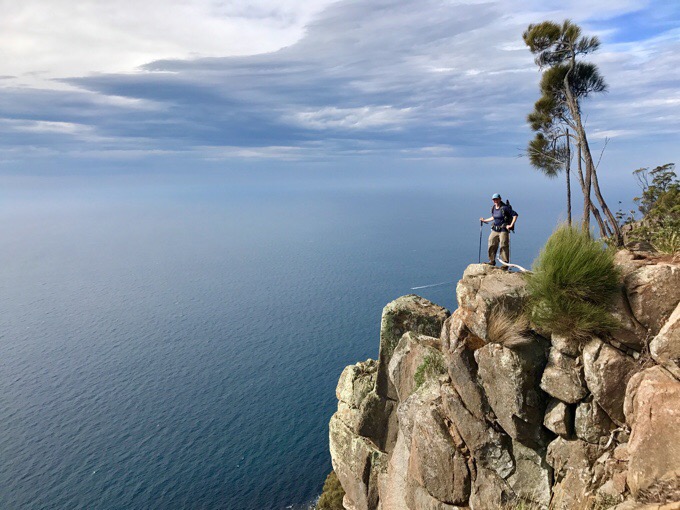 After that, we stopped off at the viewpoint of The Neck, a narrow stretch of road that connects the north and south ends of Bruny Island. This island really is ideal for a relaxing day trip or weekend close to the city, and I can see why so many people kept mentioning it. 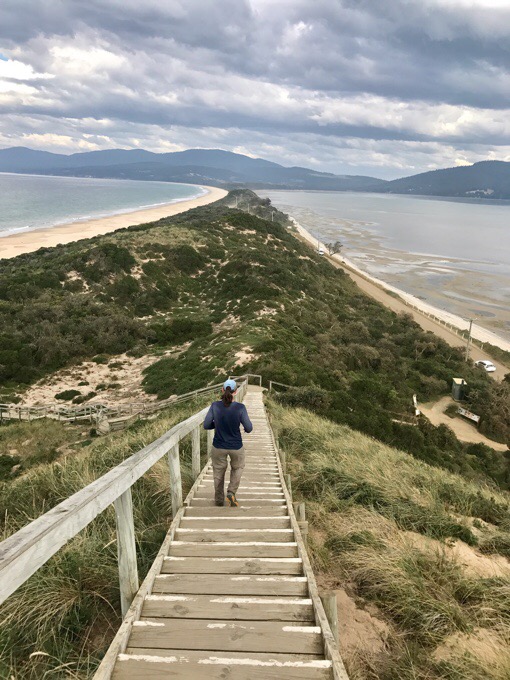 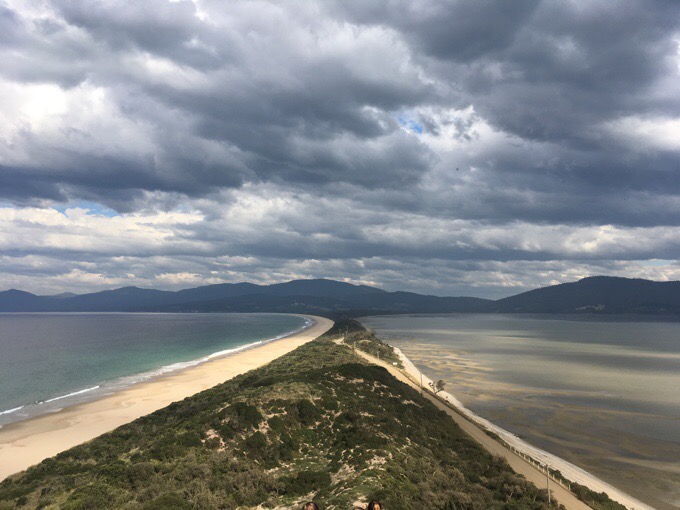 Finally, we did one other short hike to Mars Bluff and a small archway on the beach. We ate lunch on top of the Bluff, and it was a nice way to close things out. Clouds were around and we saw isolated rain in the distance much of the day, but thankfully no rain on us. We made it through Tassie somehow with hardly any rain at all. I do like how everything is so close and how you can most likely drive to a dry place if it’s raining somewhere else. 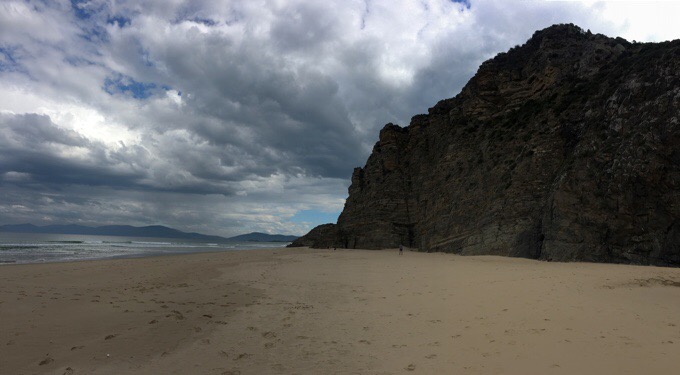 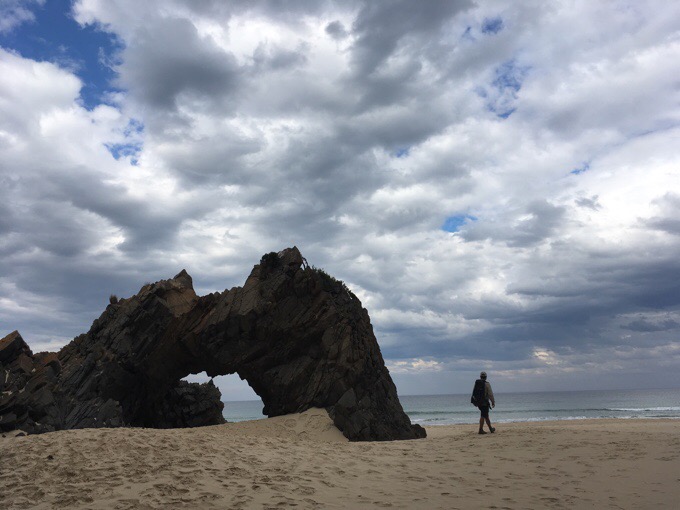 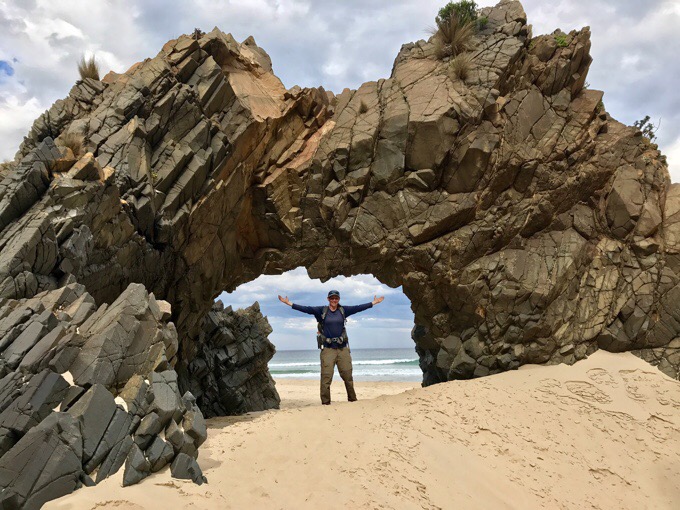 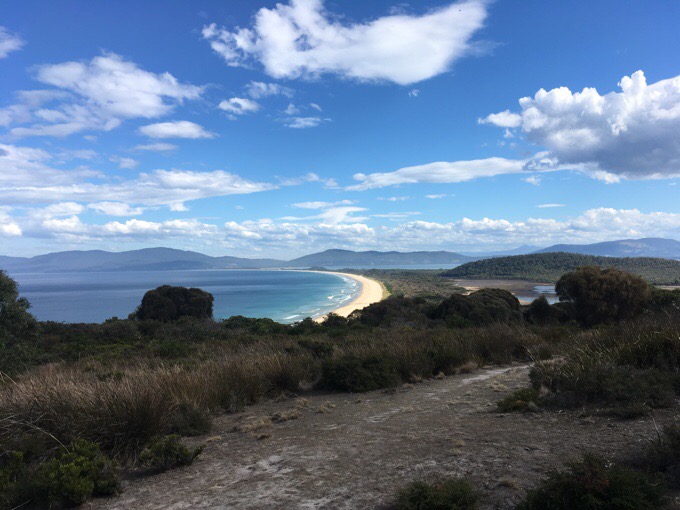 We returned to Hobart by late afternoon, and will be staying at the Tasmania Inn again with a zero rainy day tomorrow to totally veg out. We each fly out of Melbourne and back to the US in a few days, so we will spend a couple days in Melbourne. No major plans really, just happy to relax and chill these final days before returning home. I got to watch the latest Survivor episode and am catching up on a backlog of Greys Anatomy. Ah, loving the relaxing and resting! I’m glad we booked this buffer time to have some downtime if we wanted it, and I’m welcoming it. Tomorrow will be spent catching up on things, (including some shows, of course) and organizing for my return home to Portland (yay!). I’m ready to return HOME! Here’s a map that shows all we did in our 34 days in Tassie. Of those days, we hiked in some capacity on 27 of those days totaling 524.5km/319.6mi. I’d say the mission was accomplished! This really was a great finale to wrap up 3/4 of a year of hiking. 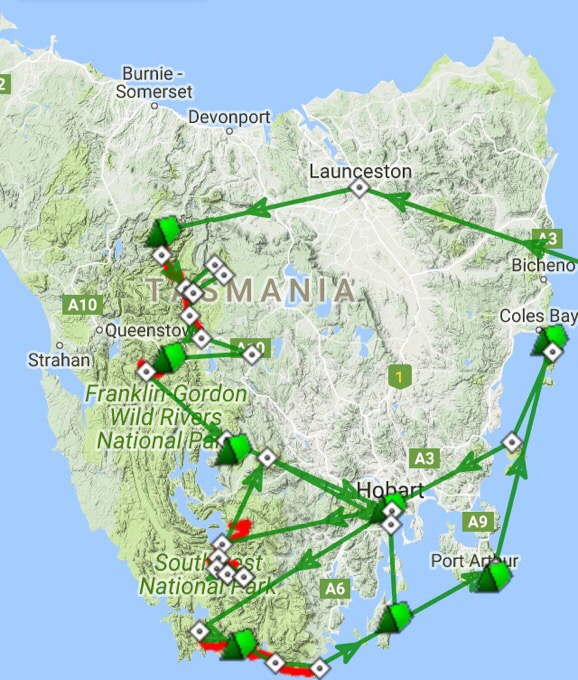 Our month in Tassie!

I will do a couple more posts on the time spent in Melbourne and thoughts as I return home, but I know many of you will be getting off the journey here now that the hiking is complete. It’s been quite a ride this year, and it’s been great to have so many old and new followers along for the journey. As a brief review, here’s a list of all the trails and routes I’ve done in the last 9.5 months. Many of these routes had much lower daily mileages due to the their difficulty, so the total mileage isn’t as high as one might imagine. Still, 6148km/3820mi is not too shabby.


As a comparison, in the last 11 months, Griggs has done 8390km/5213mi having done the PCT and the Long Trail in Vermont before heading to NZ. I’ve mentioned before, but for those that want to continue to follow, he will be getting on the Continental Divide Trail in less than a month for 4-5 more months of hiking. Griggs really has no plans to stop, and the wheels are already spinning for what’s to come after the CDT. He will be Insta-blogging (love that term!) daily at @griggsdomler.

We have found that we are the most compatible hiking partners either of us have ever had, so I wouldn’t be surprised if we team up again someday. Heck, I can’t let him pass me in total mileage! At his pace and determination, he may rack up more miles than anyone someday. Thank you to Griggs for being such a great partner, and for making these last 2.5 months so enjoyable. I’m totally spoiled and he’s set a very high bar as a hiking partner. We joke how the best compliment we have for one another is that we don’t annoy each other, so thanks for NOT being annoying Griggs, ha! Seriously, it made Tasmania so much more fun and adventurous to pair up with Griggs, and I’m very grateful that we have crossed paths.

Well, while I’m at it, I think I should preemptively end the questions of “what’s next!?” I’ve known that Europe is probably where I want to head the next few years. It seems that there’s an endless list of possibilities out there. I’m 90% sure I have the next trail picked out. It’s called the Pyrenees High Route. A range along the border of France and Spain that’s quite popular. I know many people who have done this ~45 day route, and all say it’s one of their all time favorite hikes. It will fit in perfectly for the summer in July and August, so I can substitute teach the rest of the school year. I’ve yet to decide if I’ll extend it to other things after the PHR, and am currently content with just a couple months travel after being gone so much this year. That’s the plan for now. Really looking forward to that one! Still a couple more posts to come before the hiatus begins…