The hiatus is almost over! A new season of Walking With Wired kicks off in just two weeks! After a 9.5 month super season last year, the past two months have been a much welcomed hiatus from both hiking and blogging. A needed rest for the mind and body. It’s been nice to get back into the comfortable routine I have in Portland, OR; sleeping in a super comfy bed (with lots of pillows!), taking long hot showers, eating fresh food (I crave salads!), substitute teaching, and of course, watching television shows. A few things are different this year upon my return. First off, since I’m only home for a couple months, and I knew I needed rest, I’ve chosen to only work one job. The past six years, I’ve been substitute teaching, and then nannying and babysitting during out-of-school time and weekends. It’s felt quite indulgent to work a 40hr week as opposed to the 60-70hrs I’m used to. I’ve used those extra hours to rest, plan for this upcoming summer, watch shows (of course!), catch up with friends, and did I mention rest?

It feels odd to have so much free time, but I’m embracing it for this short bit. Another unusual happening, is that after so many months of minimal interaction with fewer people, I am finding myself much more drained by the group interaction required to substitute teach daily. Social interaction always drains me more than physical exertion, but it has been more tiring than usual these past two months. Unusually, I haven’t been too active, just running every so often and two relaxed overnights in wilderness. I’m going with my gut on this one, and I think my body seems to want to rest. What I did last year was quite the endurance challenge, and I keep reminding myself that. I’ve allowed myself this time to be a bit of a sloth, and to eat all I desire, since I know I’m headed right back out soon. Oh the perks of thru-hiking where you can eat all you want, and still lose weight!

Yes, this has been a definite time of rest…and the always dreaded planning! This upcoming season, I’ll be spending three months hiking in France, wahoo! I’m super excited about this. Even though I’ve been traveling and hiking for many years now, it still feels unbelievable to even think that I’m going to be in France and in a city like Paris that seems so iconic and unreal. This is the first of I’m sure countless future hikes in Europe. I’m aware that there are tons of hikes to do out there, and I have great friends who have done many of them, so my wish list is quite long. The ones I chose for this summer seem to be good ones for getting my feet wet over there, and gaining more comfort with traveling in Europe. I’m limited to just 3 months within a 6 month period in all of the Schengen Region, which is most of Europe, so that’s frustrating unless I jump through a lot of hoops and get creative for a long visa. I was fine with 3 months this summer, and chose hikes that would fit nicely into that timeframe. Here’s a map to get a good picture of what’s to come. I had no idea where things were situated over there until I took a closer look. 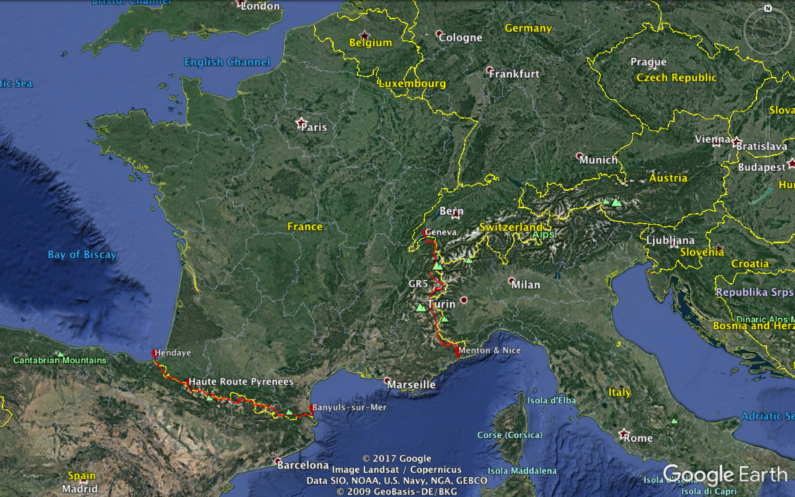 In red are the Haute Route Pyrenees and the GR5. Click on the photo to see it larger. Click here to redirect to an interactive map of the routes.

First, I’ll fly into Paris where I’ll do a few days of sightseeing before I take a train to Hendaye to begin the Haute Route Pyrenees (HRP), a 500mi/800km route that traverses the Pyrenees range, which runs along the border of Spain and France, from the Atlantic to the Mediterranean. Europe has a network of footpaths referred to as GR (called Grande Randonnee in France). The Pyrenees mountains are world class, and highly traveled both on the Spain side (GR11) and the France side (GR10). Between the two, traversing the highest route through the Pyrenees is the HRP. The HRP is generally off trail and comparable to the idea of the Sierra High Route that I did last summer, in which the route traversed the Sierra Nevada Mountains and sometimes overlapped with the more traveled and defined John Muir Trail. I heard about the HRP repeatedly from international hikers as I hiked the Te Araroa in New Zealand this past year. All commented that it was amazing, and at the top of the list for a long distance hike. The HRP is what drew me to what I’ll be doing this summer. Here are some photos from Jerry, a blog follower of mine from the UK that did the full HRP last year, loves the Pyrenees, and has encouraged me for a couple years now to do the HRP. Jerry has been a great resource for my planning and I want to say THANK YOU to Jerry for all your help and for letting me use some of your great photos. Look at this place! 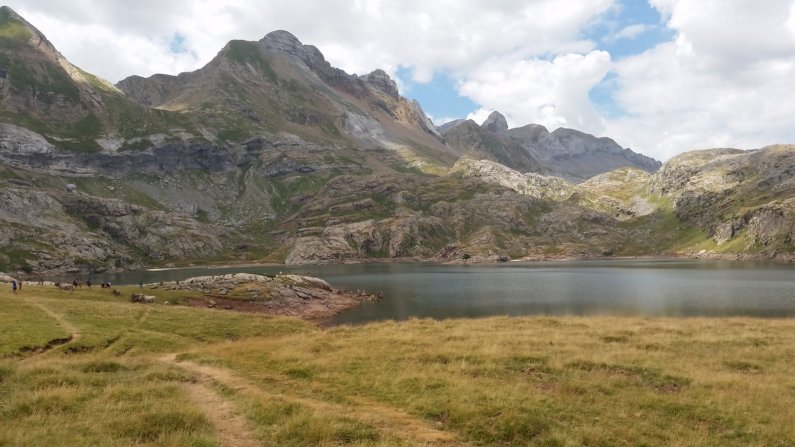 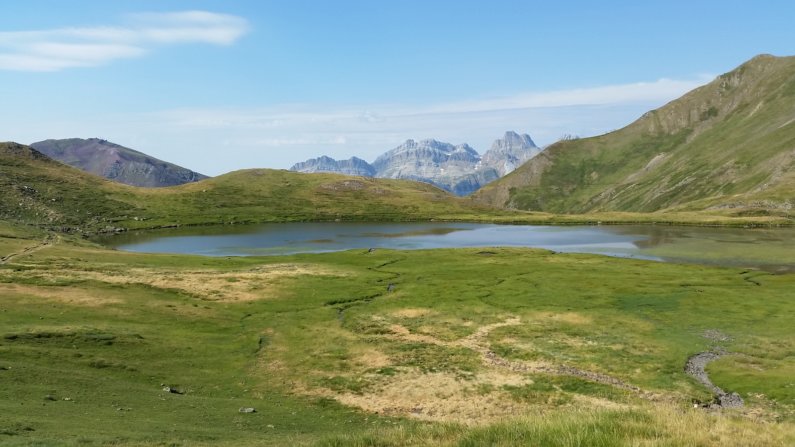 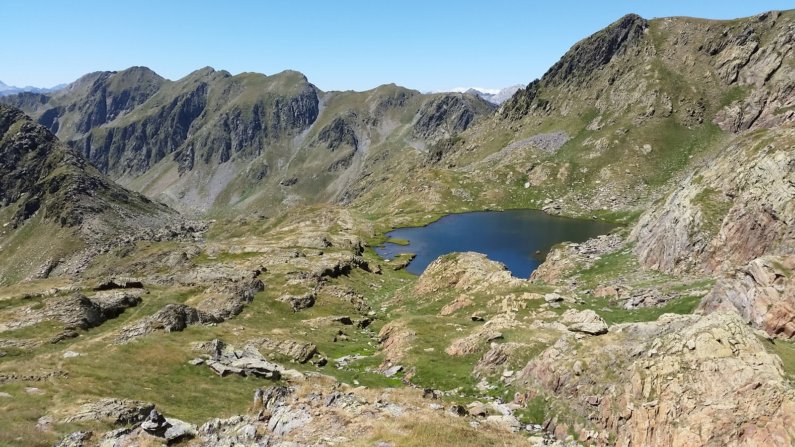 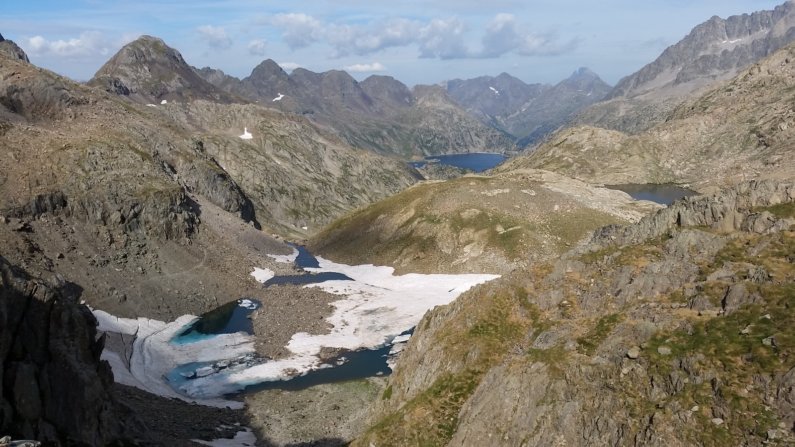 The HRP should take me somewhere around 40 days to do. The weather out there can be the full spectrum with anything from sweltering heat and thunderstorms to freezing temps and snow. One thing to know about hiking in Europe is that there are huts or refugios along most of the popular routes. They often have many services with the option to buy prepared food and wine. Yep, this is France after all. Because of this, there’s the option to carry very little food along the way. You all know me, and my preference for solitude and keeping expenses low, so my plan is to only use the refugios when really necessary, but it’s pretty awesome and tempting to know they will be there. I will be able to resupply in small villages along the way. I will do my best to post in a timely fashion, but there may be gaps of days between service along the HRP. Here are a couple photos of the clouds that can come and on of the refugios. I won’t go into detail here, but if anyone is wanting to do the HRP and is interested in my resources and planning materials, here’s a link to what I’ll be using. I am greatly appreciative to those that have hiked this route in the years preceding me that have publicly posted helpful beta. They are featured and credited in that link. 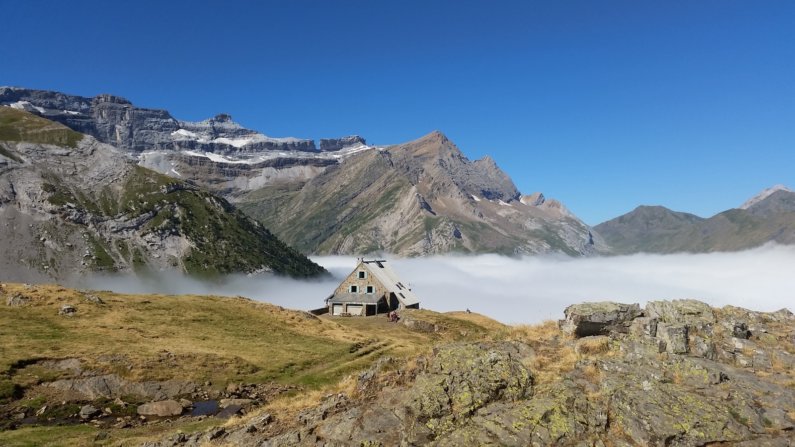 After the HRP, I’ll be near Barcelona, and may do some sightseeing there before I head over to the other side of France to hike the GR5, which is in the French Alps that run along the border of France near Italy. The full GR5 runs the whole length of the east side of France, but most who are referring to the GR5 are talking about the highly scenic and desired stretch, which I’ll be focused on, that runs 460mi/740km from Geneva to Nice/Mention and goes along Mt Blanc. This is a very popular area for tourists and will be much more traveled than the Pyrenees. It might be more people than I’m comfortable with, but it will be worth it for the scenic rewards. My friends, Gian and Laura, who I met on the Great Divide Trail and live in Switzerland recommended it (among many other hikes!), and they provided some photos for me to use here. Thank you Gian and Laura! Man, what great photos! Follow them both on Instagram for more. 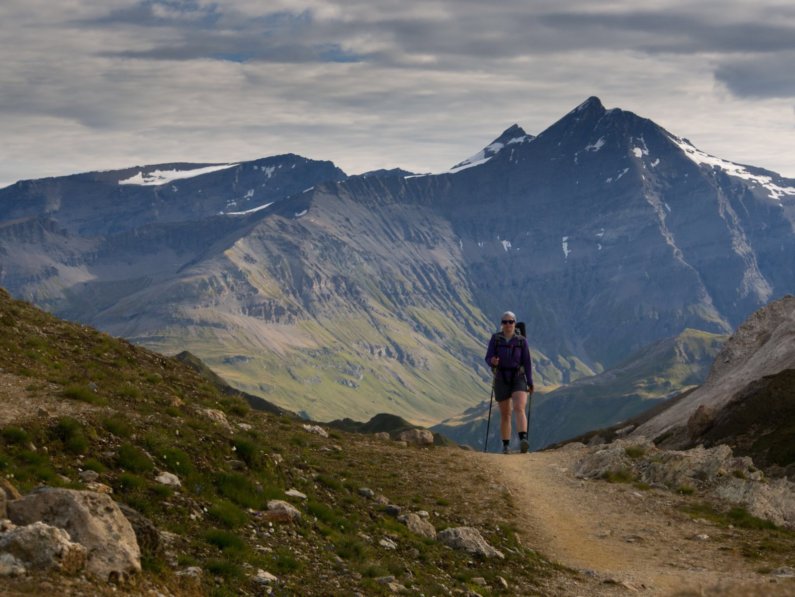 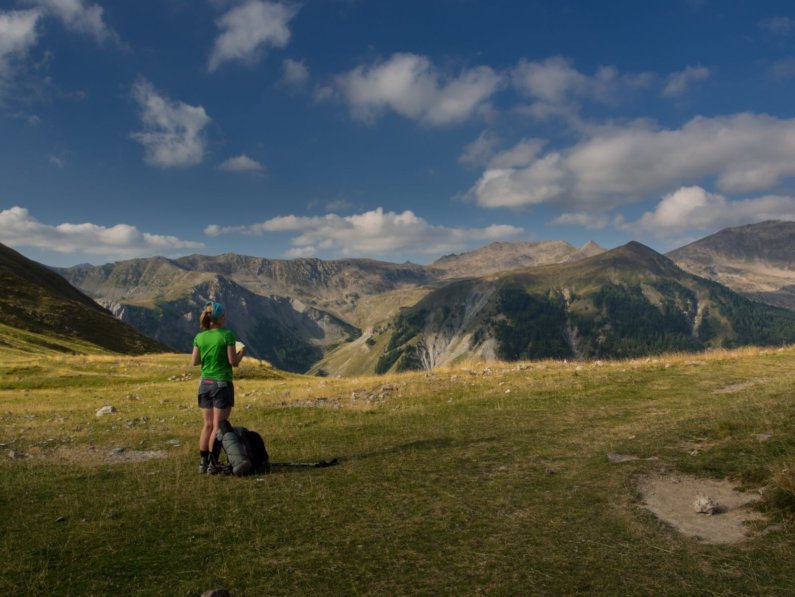 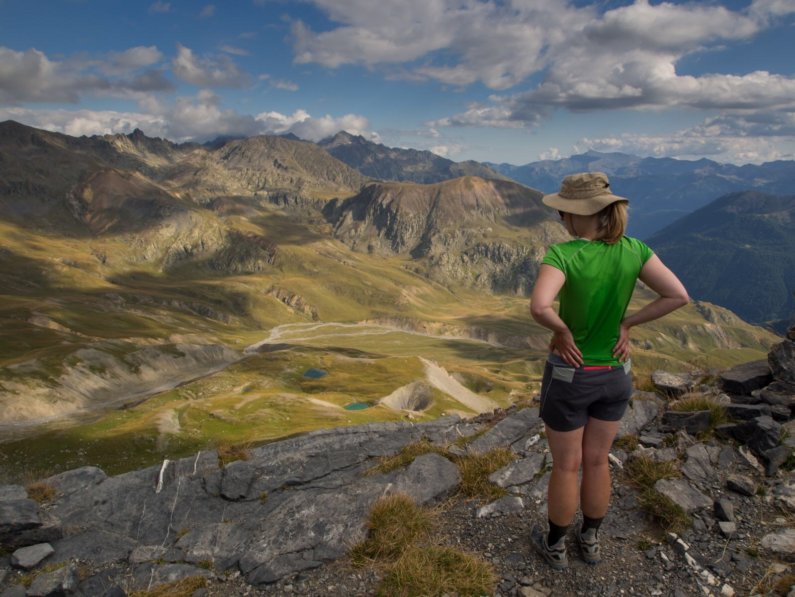 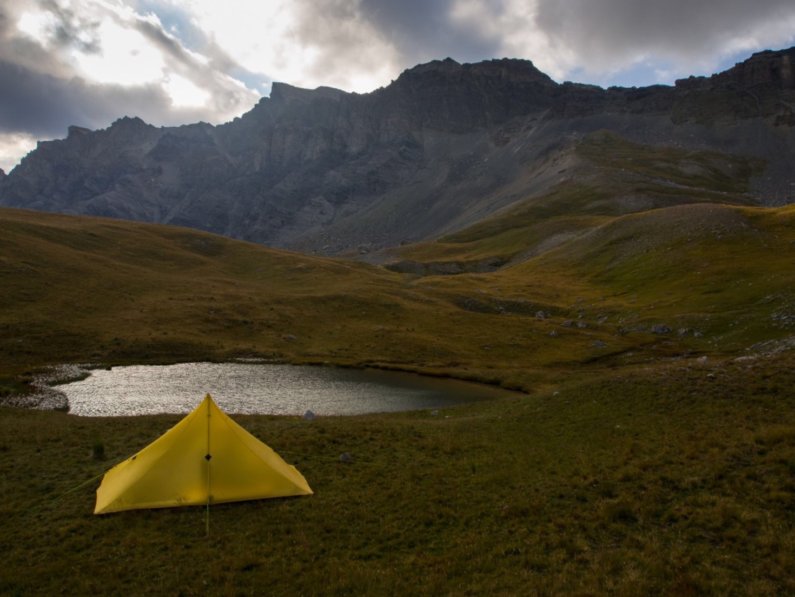 I know, it’s looks pretty darn grand doesn’t it? The GR5 should take about a month or less to do. I haven’t planned that one much and think it will be nice to do on the fly using the guidebook. I should have some bonus time after that, and I’ve left that open with a few possibilities depending on the timing and my mood. At the top of that list would be the Hikers Haute Route that goes into the Swiss Alps. I really hope I have time to finish off the summer with that one, but I didn’t want to force too much into one trip. That may take priority over visiting Barcelona if it seems that I could have enough time after the HRP. I hope so! If anyone wants to view these routes on an interactive map, go to my Where’s Wired tab.

Well, that’s it for the preview to this upcoming season. It really looks incredible and I’m really quite excited about it. It still doesn’t even feel real! Two questions I keep getting that I’ll answer now is if I’m hiking with anyone and if I know French. The answer to both is NO. I know Spanish, which will help in the Pyrenees. I will learn the basic French that is in my guidebook for hiking, food, and accommodation. I have a podcast I might try to learn more from, but as I understand it, it’s more of a courtesy to start off with French and then most speak English and appreciate the initial effort. Yes, I’m lazy in that sense, and I know they hate that, but I’m kinda glad I won’t speak the same language as many out there. Along those lines, I am really excited to head out solo. I spent much of this past year with a partner in some sense, which was an intentional challenge I wanted to add to last year, but I’m ready for some hiking on my own. There are coincidentally many of my hiking friends (some you all know!) that will be out in the region at the same time. We may even overlap or cross paths, but for now, I won’t get anyone’s hopes up for reunions. There are some really fun possibilities in there that you all would love if things come together though. Yeah, now it’s killing you I know. We’ll see if any of them pan out…two weeks to go till Paris! You guys, we’re going to France!!!