Day 11: Reminiscent Of The Sierra

I’ve been making an effort to relax and rest more by making my hiking days shorter. I’ve been aiming for 8am, but still wake up naturally well before then. I’ve done pretty well at forcing myself back to sleep and I think it’s been good for me. Today, I dozed off and got going a bit later and then met a nice pair also leaving the refuge doing this section of the HRP between Lescun and Gavarnie as a yo-yo. They heard this is the best section, which I would believe even having not done it all. The next section should also be awesome, but has more difficult terrain. Doing it as a yo-yo, they can do it slightly differently on the way back to see more things. There really is a lot to see out here, so that’s a great idea. After talking with them, I left the refuge for about an hour of a descent to the valley floor. It was a relaxing start to the morning with a gradual down and a stream along the path most of the way. 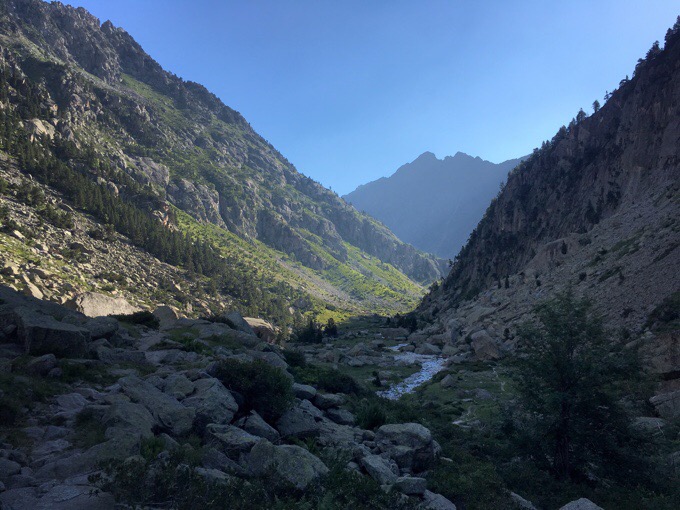 Then the climbing for the day started. The uphill continued all the way until lunch with an ascent of 3937ft/1200m. It was mostly gradual and steady up to Port de la Peter-Saint-Martin. It is a nice climb to do in the morning because there is shade over the half of the canyon that the trail is on. The path did have its share of rockiness though. 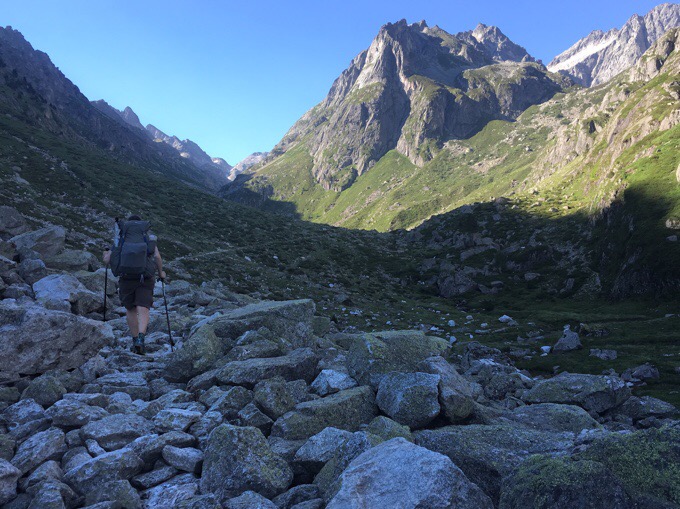 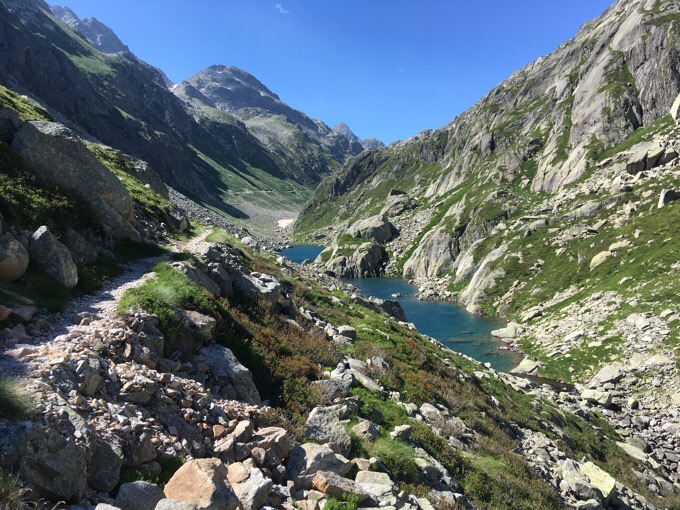 Once up to the Port de la Peter-Saint-Martin, the real climb began in the final hour or so up to Col de Cambalès. It was quite steep and rocky, but fortunately, there were switchbacks. 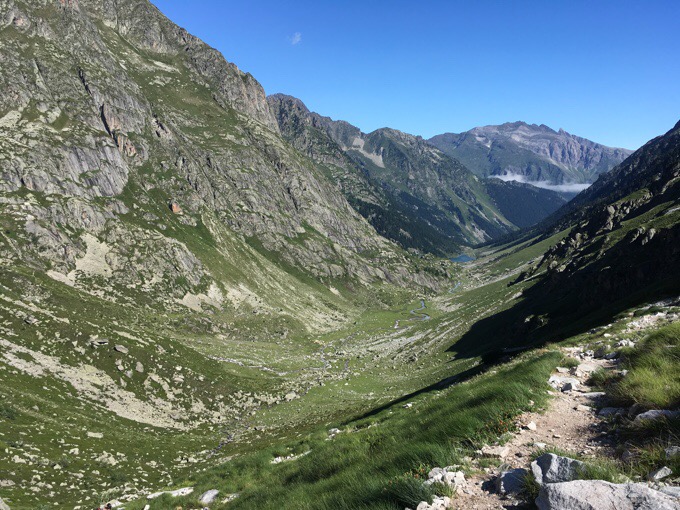 Looking back on the valley as I neared the top of the switchbacks.

Once on top, I happily took in the view of what’s to come while I ate my lunch. Not a bad lunch view at all! 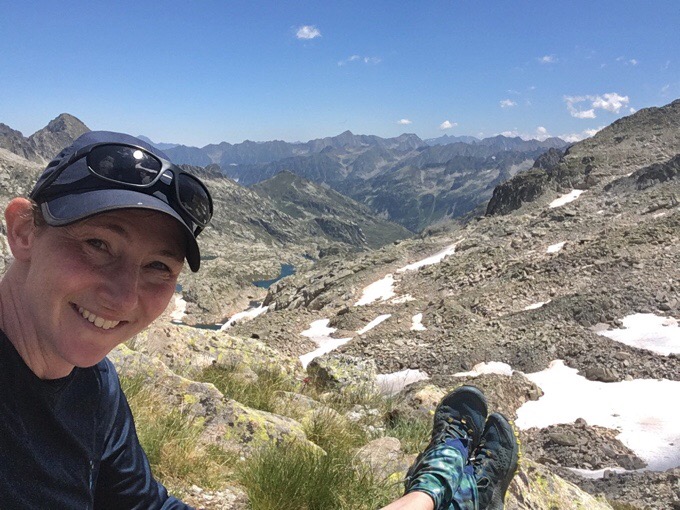 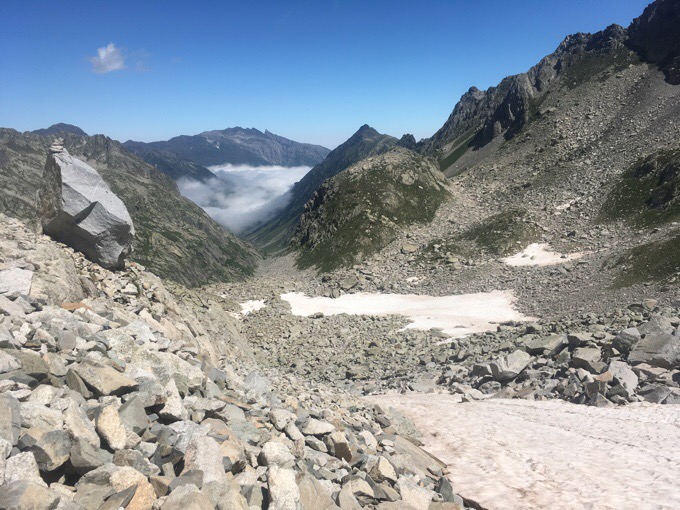 I saw some hikers ahead of me taking the rocks down rather than the snow and they were moving quite slowly. I’ve been carrying microspikes for just this situation, so I was excited to throw those puppies on and go down on the snow. I was down in no time at all. 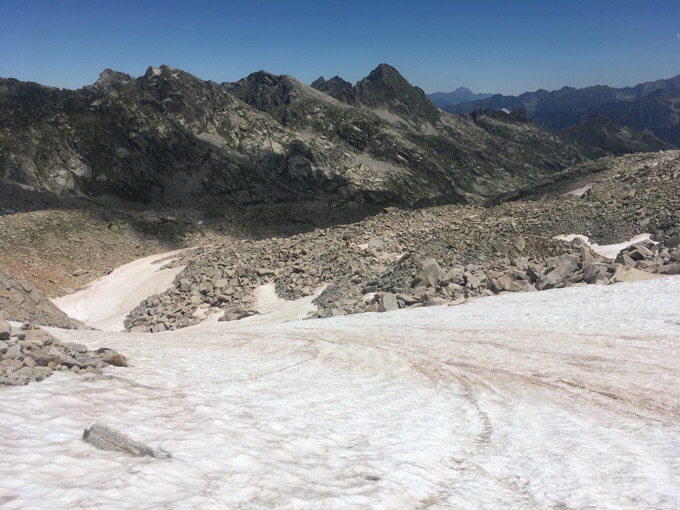 I got to where the snow had melted out and spent the rest of the afternoon going down a valley that was very much like the Sierra in California. Rubble, smooth rock, cairns, and lots of lakes. Amazingly, no bugs! 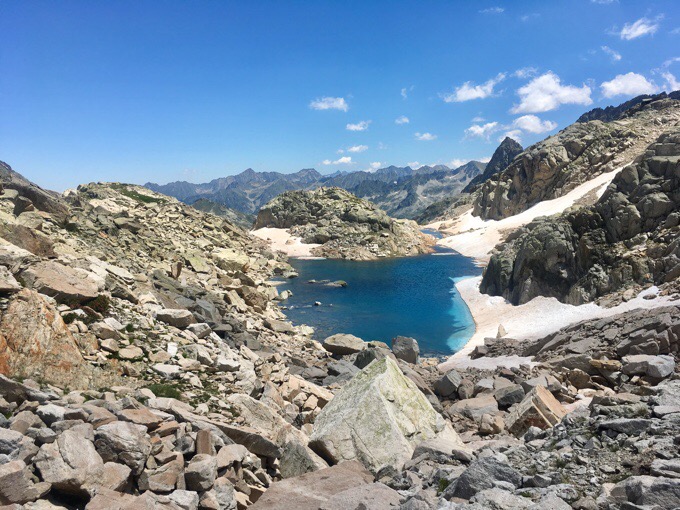 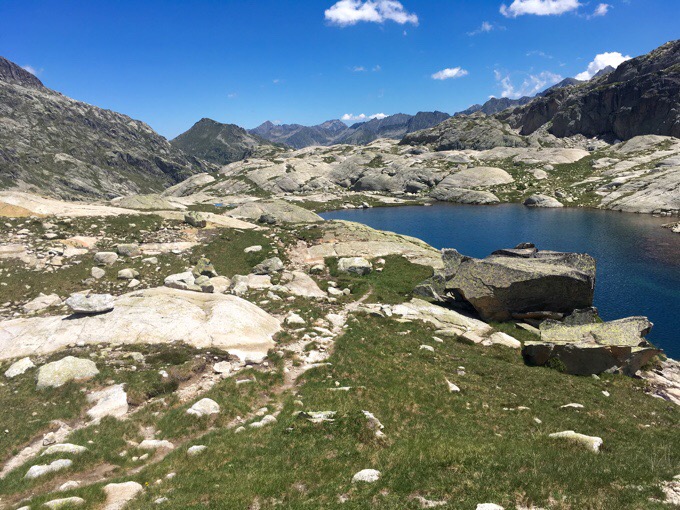 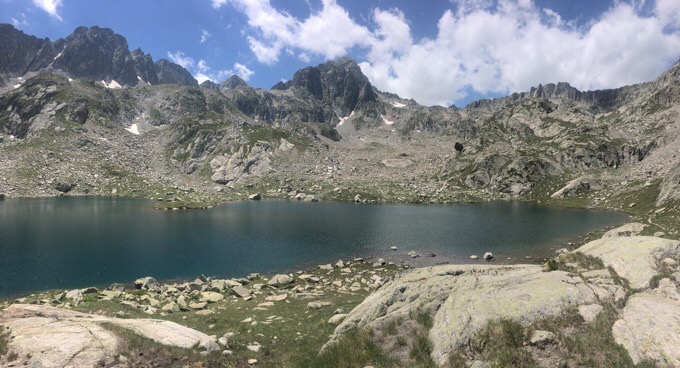 I loved it and only saw one couple on my way down. I hit a lake as part of Lacs de Cambalès that really had a grand and serene setting as I looked back from where I came. I sat there for awhile as it’s my favorite spot on this route thus far. 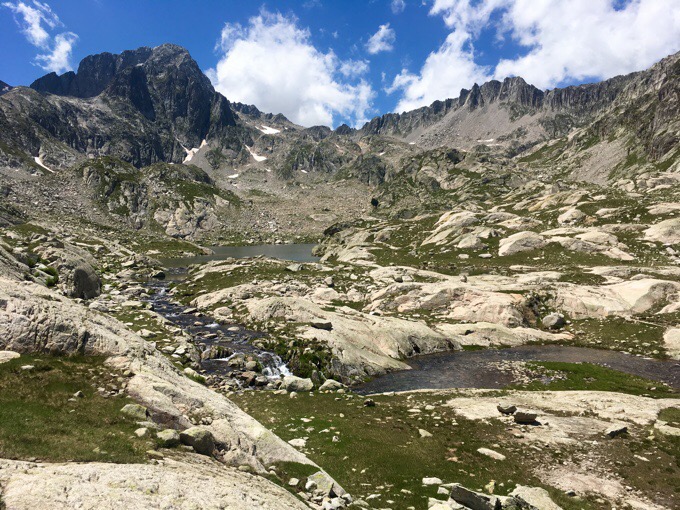 Again, photos don’t capture the enormity of it all, but it’s quite a feeling to look back and know I came all the way down from the center of the range above the lake.

A panoramic of the same view looking back.

After leaving the lake, I wondered why more people weren’t up there. It was such a great area, and I knew I wasn’t far from a refuge. Then, as I continued down the valley, I saw over a dozen people hiking up, and that confirmed that it’s definitely a destined spot. 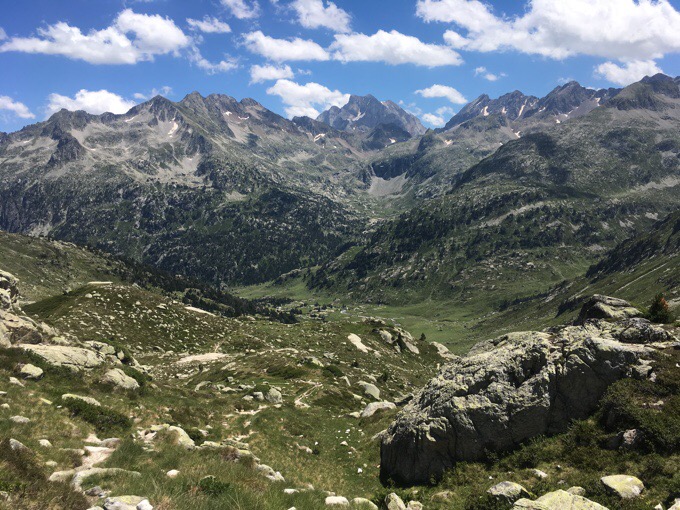 Down to the valley.

I continued down to Refuge Wallon that holds 120 people! It looked more like a hotel. I got there before 4pm, and knew I was hiking on. It was an idyllic setting though. Jeez, 120 people! 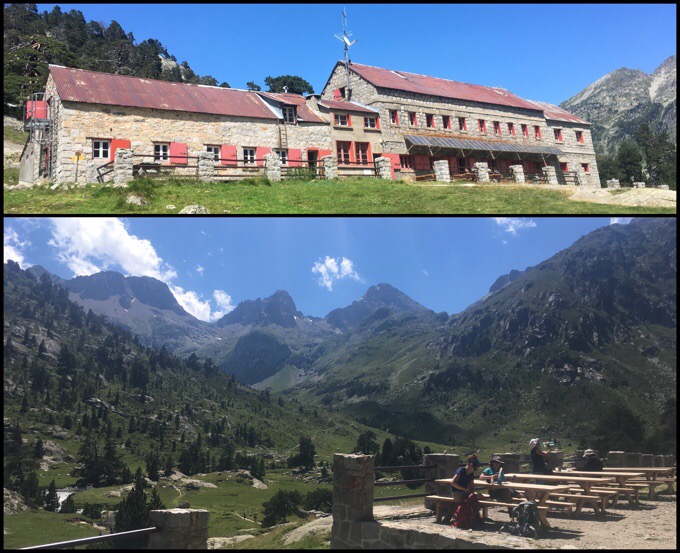 I looked through the guidebook and realized that I need to be careful or I’ll mistime my arrival to the village of Gavarnie in a couple days. My goal in reaching town is to arrive late morning so I get a full day there and maximize the amount of time wherever I might be staying. If I go too far today, I’ll need to do a shorter day tomorrow to avoid getting too close to town because I don’t want to arrive tomorrow night or too early in the morning. I told myself 1.5hrs more to a lake would be a good point to stop. The hike up from the refuge had nice pine trees providing cool shade. 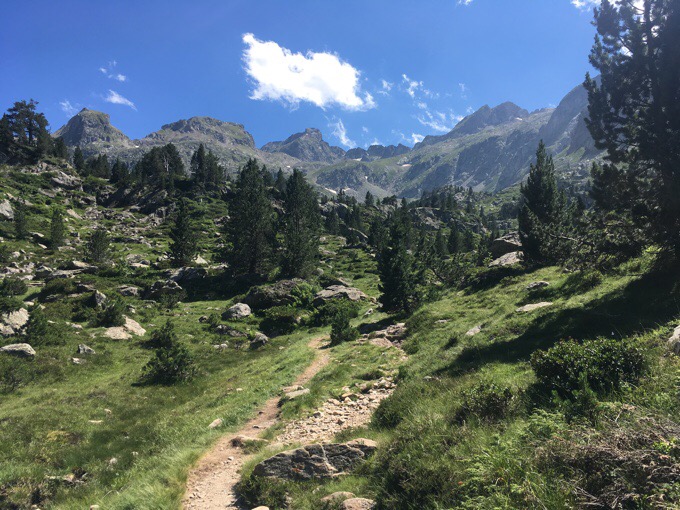 I read in the guide that the trees thin out to just grass up further, and I worried about camping out in the open as it seemed the wind had been gusting a bit on and off. As I was thinking that, I passed the perfect camp spot, but it was only 4:30pm. I was going to go an hour more, but really didn’t need to. Just as I was contemplating wether to stay or not, a hiker came up behind me, which I totally didn’t expect since most stay at the refuge. I asked him if he knew the area near the lake I was headed and realized he was familiar. It took a second for us to realize it, but it was JB, another HRP hiker that overlapped with Why Not and Jim the morning we went into Lescun. I briefly met JB as I was arriving and he was leaving that morning. It was fun to see each other again and overlap with an HRP hiker more than once. He too was stopping to camp soon also wondering about the exposure. He is French and reminded me that the day we both plan to be in Gavarnie is Bastille Day, a national holiday in France. That might not be good…I may have trouble finding a place to stay and the grocery store may not be open. Nothing I can do about it now. I think there’s a camping option if needed. JB continued on a bit to find a spot and we may overlap more in the next few days. He has a package in town and realized he might have to wait two zero days because of the holiday and weekend to get his package.

The camp spot I have is ideal in many ways for me. Shaded, grass, protected from wind, and had a great stream running nearby for plenty of white noise. I even made dinner on the rock by the stream. 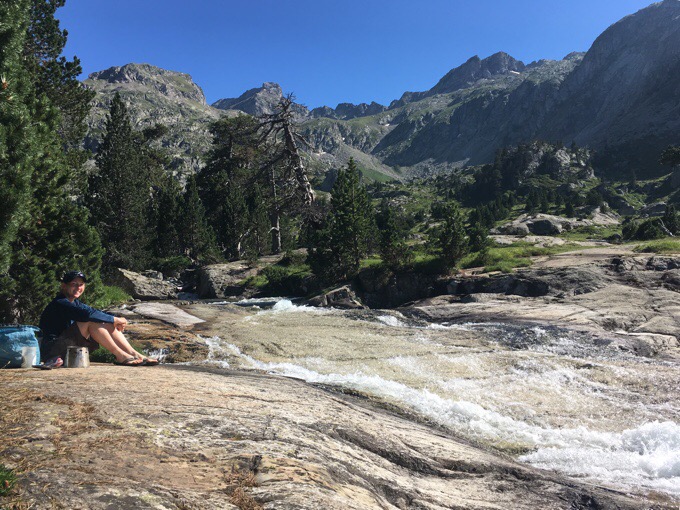 The catch is that there are ants like crazy! Like painful red ants. They are everywhere and I ended up having to eat in my tent. Every time I sit or stand somewhere, I see a couple, and then they call their friends and before I know it, they are stuck to my sandals like some kind of super ant and biting my feet. They were here slightly when I arrived, and I even stood for awhile to test how much they gathered. Apparently, they had a more delayed response. Seriously, I can’t even stand long enough to pee without getting bit. I will NOT be digging a hole here tomorrow morning, I know that. 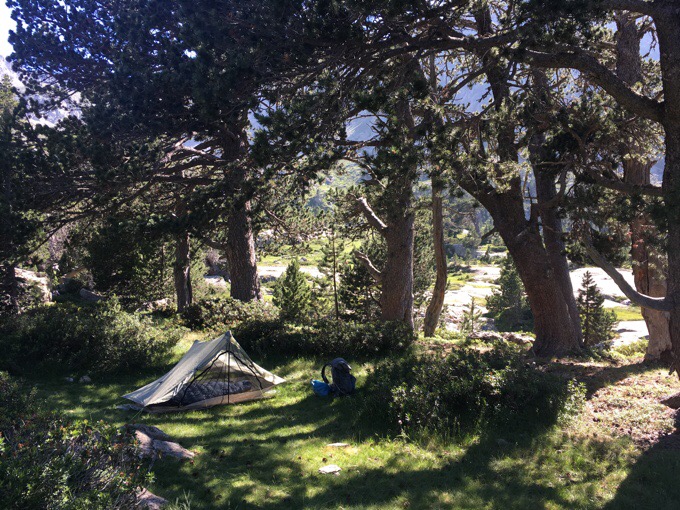 Around 7pm, just as the sun went behind the mountains, some fog rolled in. It is hanging thick in the valley where the refuge is and is thin here. It isn’t too thick, so things aren’t wet or anything, and I can still see the tops of the mountains around me. It seems it’s settling lower, thankfully. I did notice some cow patties around and wondered about bells. After being in bed for an hour, I heard one cow bell that was thankfully muffled by the stream, whew. I finally realized what the cow bells remind me of when there is a herd. It’s like being at a soccer game with all the loud noise and cow bells! The sheep ones are more like banging pots. Ah, nature. Now that I have plenty of time, I’m choosing a movie for tonight. The Lego Batman Movie! I loved The Lego Movie, just cracks me up! I’m excited to see this one. Ah, what a great day!