Day 14: Let’s See What These Legs Can Do

July 15th
Gavarnie-Lacs de Barroude
Campsite Elevation: 7774ft/2370m
*No mileage available. The guidebook lists distances on the route by time rather than miles.

Last night, a woman in the dorm room snored the whole night, I even used my white noise most the night and woke up a ton. Not much sleep last night. Today wasn’t too eventful. To make a long story short, I have a host through the trail community that is able to pick me up at the end of this leg. This leg is the crux of the trip, and in a couple days, there will be terrain that requires clear conditions for the remaining 3-4 days. Weather is tough to predict far in advance in the Pyrenees, but it’s currently forecasted for thunderstorms to roll in five days from now. If I do bigger days, I might be able to finish this leg before the forecasted storms. So, I’m giving it a try, and have a fallback plan if I can’t get through before the storms. Today and tomorrow has a good deal of elevation, but simple terrain, so it’s an opportunity for me to put in longer days and make up some time. I left Gavarnie at 6:45am to get a good jump on the day. 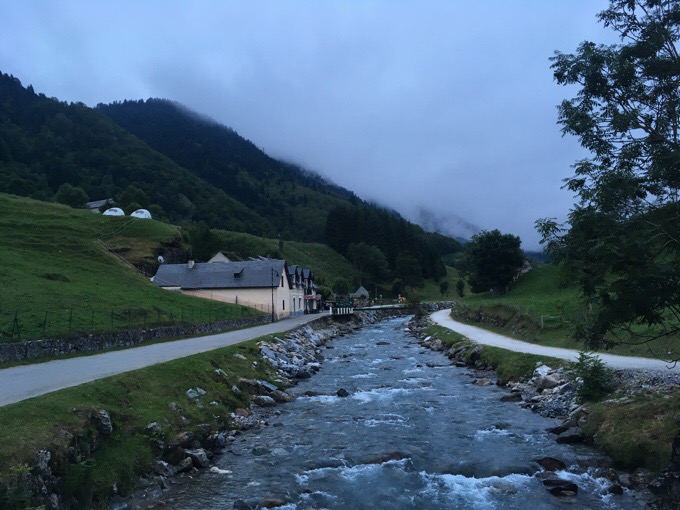 The day started with a brief road walk out of Gavarnie and then a long gradual climb of 3500ft/1065m to Hourquette d’ Alans. It was a great morning, and I was invigorated to have a challenge, so I flew up it. 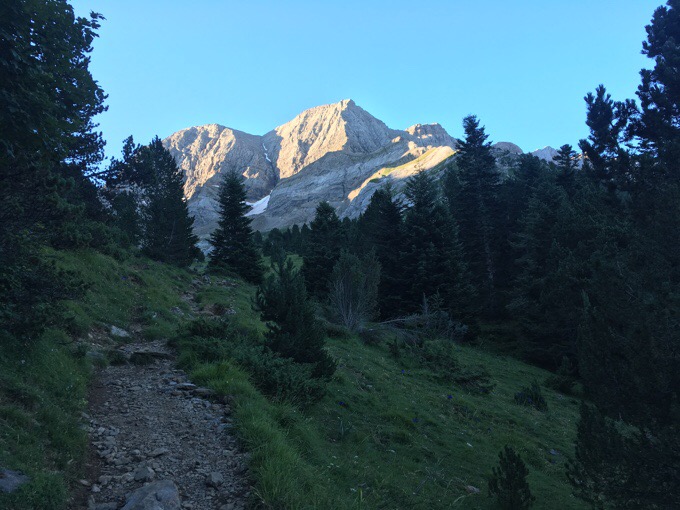 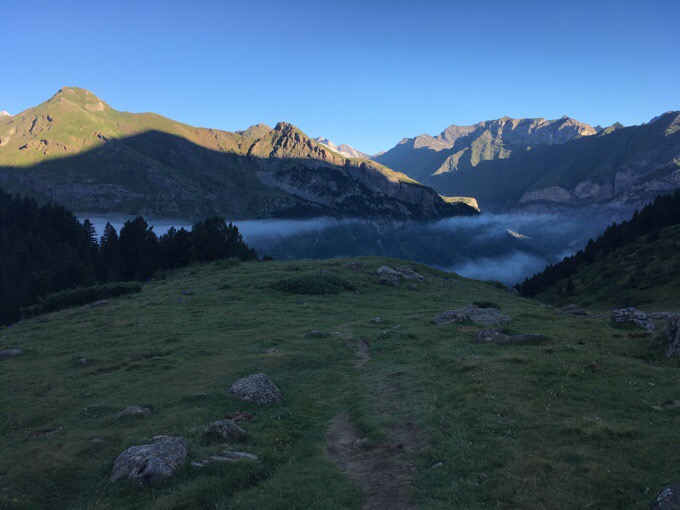 Looking back with morning light. 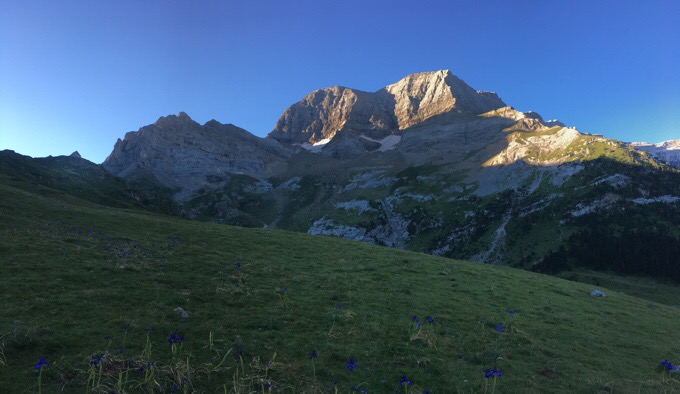 Notice the little spot of the refuge on the left on the rock. 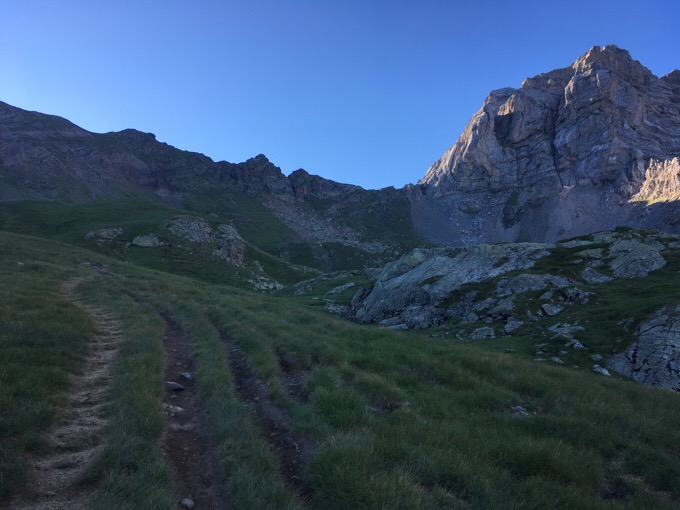 By now, you know the pattern, I then dropped right back down into a nice long descent 3051ft/930m through the Vallée d’ Estaubé, passing the dammed Lac des Gloriettes, and then an hour or more road walking down on switchbacks and then over to the next valley I’d climb back up. 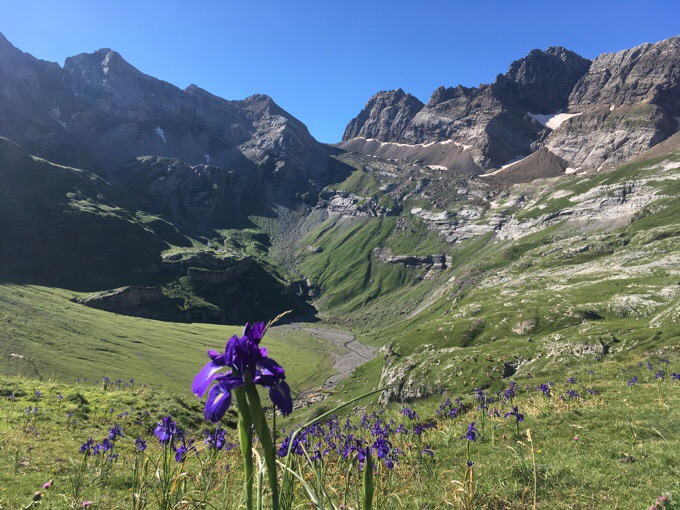 Looking back on what I came down. 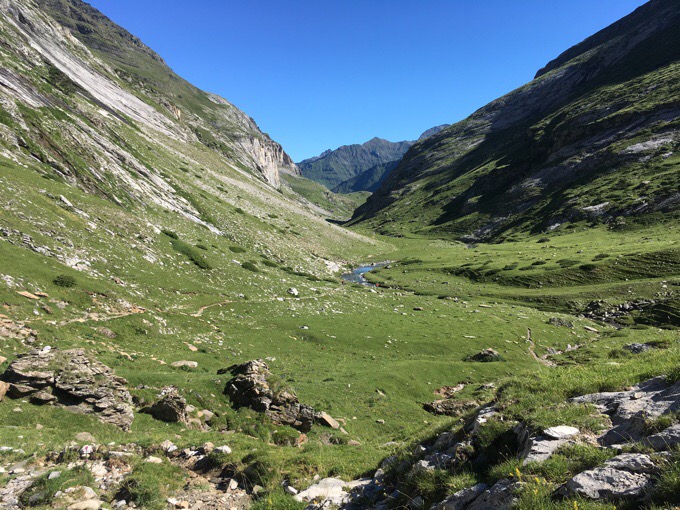 The whole day felt monotonous with similar scenery. It’s a Saturday of a holiday weekend, so a ton of families were out. I think I saw seriously 200 people from Gavarnie to the dammed lake. It was a great accessible valley that’s good terrain for all ages, so it was packed. 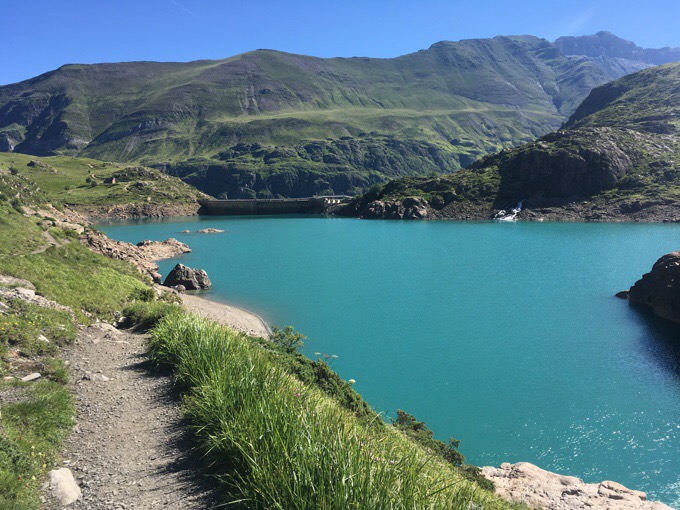 As I got past the parking at the lake and walked the switchbacks down, I saw the traffic jam of a narrow road and full lot with everyone trying to turn around and retreat. Some even parked lower down off the road and were willing to walk the switchbacks up. That’s commitment. To add to all this commotion, this is also apparently a popular bike ride up the switchbacks to see the lake. Tons of road bikers were out.

After lunch at the bottom, the sun was in full force and my afternoon climb dragged. Practically no one was in this valley as it was far dryer and didn’t have the scenic appeal of the Vallée d’ Estaubé that was much greener, had a nice stream running through it, and larger mountains. I felt bad for this valley, Vallon de Touyères, as if it had feelings of being upstaged by a sibling or something. I put in my headphones and plodded back up. 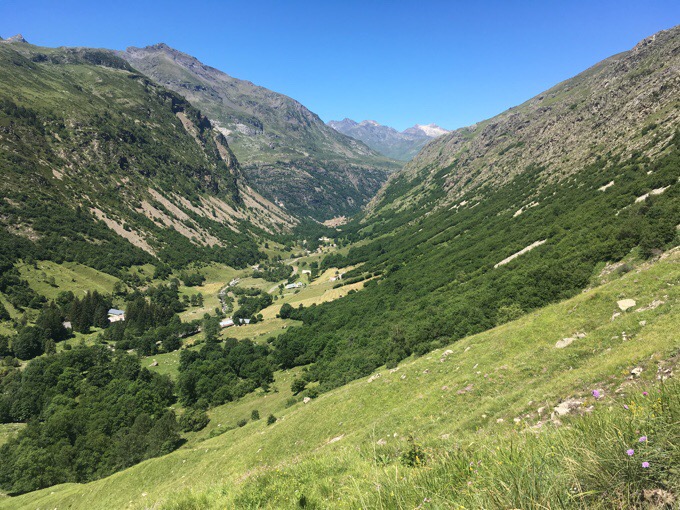 Looking back as I climb up. 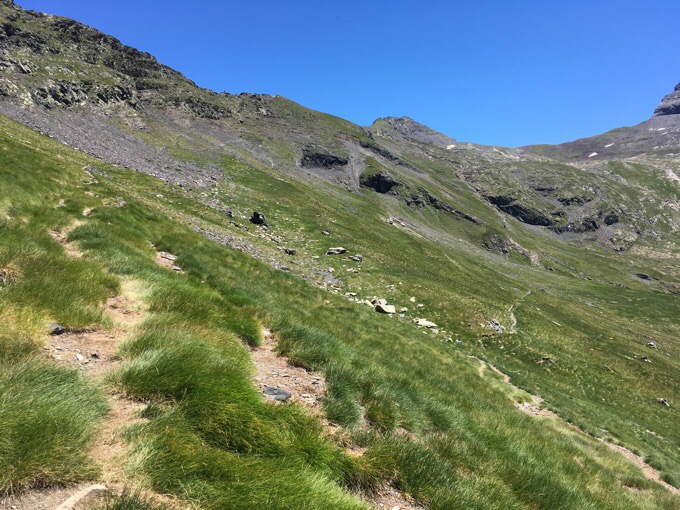 The climb took over 3hrs before I finally topped out 3600ft/1100m later on Hourquette de Héas, whew! 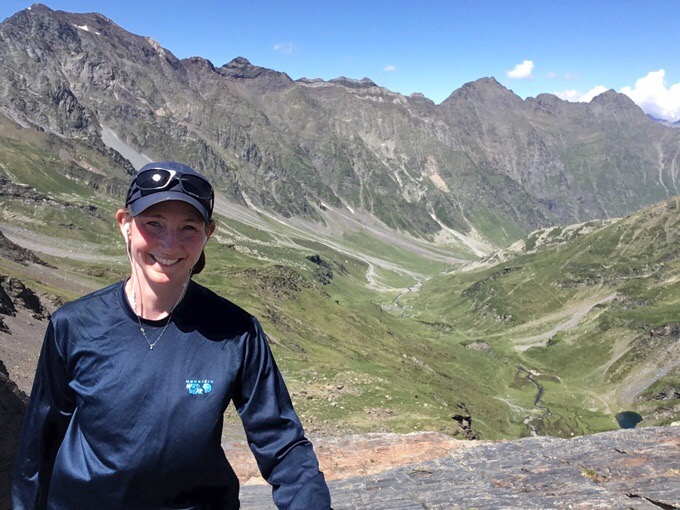 Then, to change things up again, I didn’t actually dive right back down, there was some traversing with a bit of up and down to go over one more pass and wind around to the Lacs de Barroude. 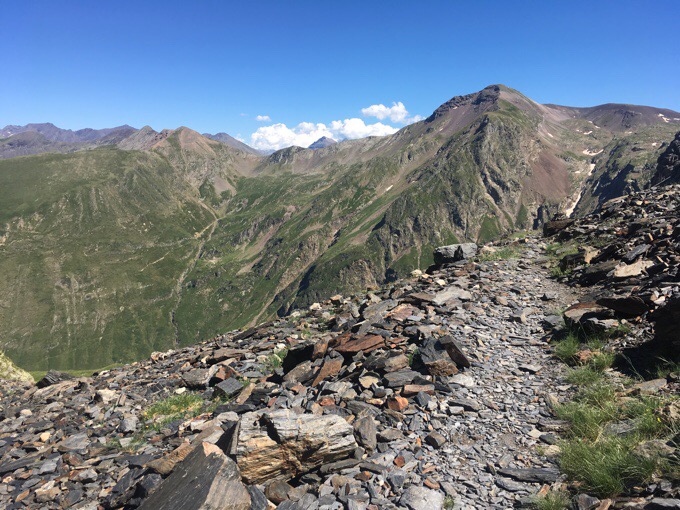 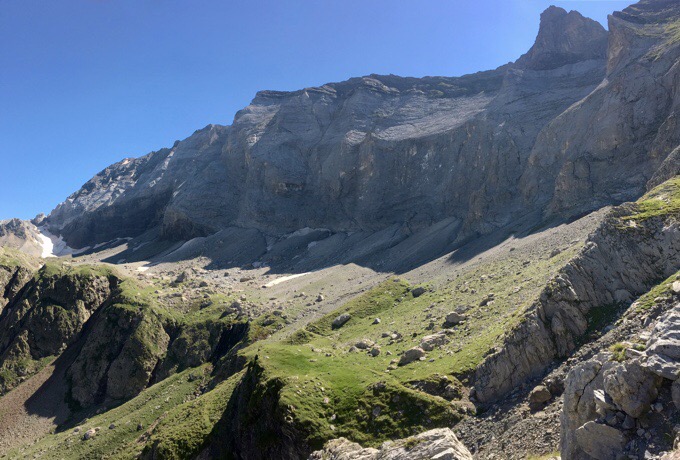 The Lacs de Barroude are a popular attraction, so there were many day hikers around the last half of my day. The guidebook says camping at the lakes are “magical.” I can’t pass that up after more of the Harry Potter and the Sacred Text podcast today, so I stopped when I arrived at 5:15pm. Sadly, I could not get photos to properly show the lakes before the sun went behind the mountains. The lakes were green when the sun was on them, and once the sun got behind the mountains, the reflection of the mountains on the water was cool. 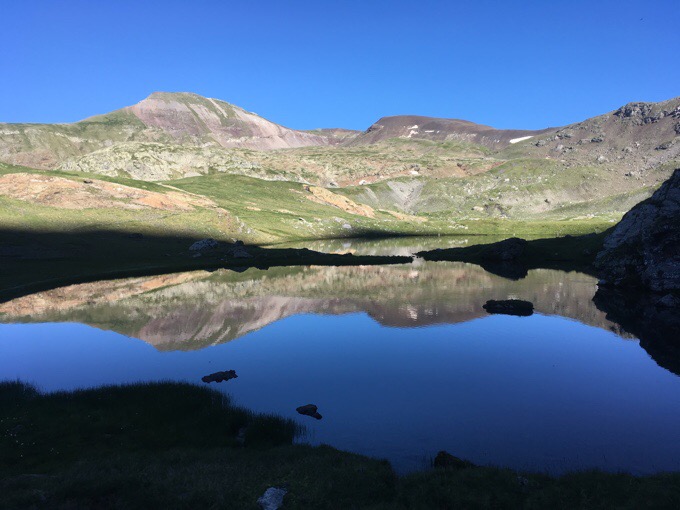 Maybe I picked the wrong angle or side of the lake to view the magical aspect. I do think the morning light could be cool, but I’ll probably leave before the sun gets high enough to hit it. 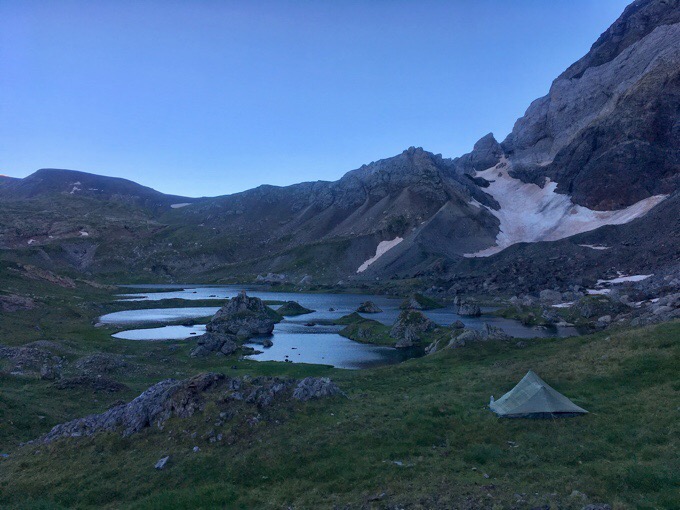 There are a lot of resident sheep here that I’ve luckily avoided as they did migrate to a new side of the lake. I wonder if they will migrate this way in the morning. Tonight, the bells sounded like a train crossing. Now, they are far enough that it’s almost faint, thankfully. I have some sleep to catch up on and should sleep hard.

I have to say, I’ve gotten used to the more relaxed days out here. Hopefully, these long days are just a temporary thing for the next few days because of the incoming weather. I was able to do over 1.5 days of what the guidebook itinerary has for this leg, so I did do a lot. It seems when I’m on a trail, I tend to be a bit faster than the book time, but when it’s scrambling or off trail, it’s more of an accurate estimate for me. I have adjusted to liking the distances given in time rather than miles in the guidebook, however, I do hope the next edition includes mileages as well just for reference.
﻿