*No mileage available. The guidebook lists distances on the route by time rather than miles.

For the first time this trip, I got an early start from my tent at 6:30am. I’ve definitely grown accustomed to sleeping in on this hike, and my body was rejecting it a bit. The plan was to do another full day to get more in before a thunderstorm front is due in 3-4 days. The day started with fairly short morning climb up to Port de Barroude from the Lacs de Barroude. As I walked by the lake and on up, I was fortunate to get to see the morning light on the rock walk reflected in the lake. 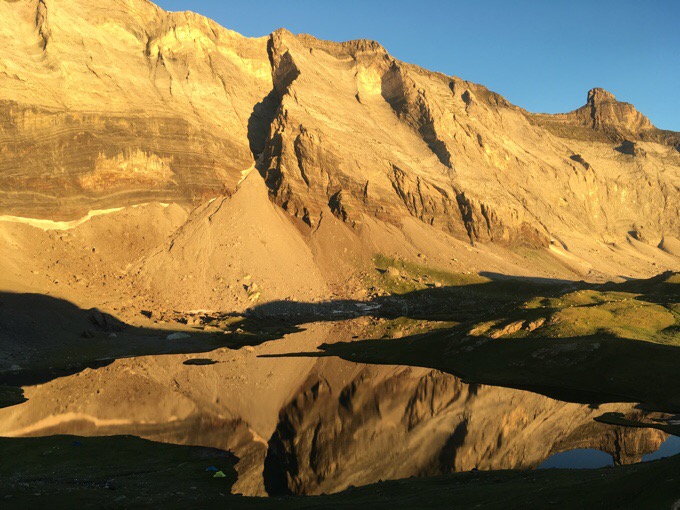 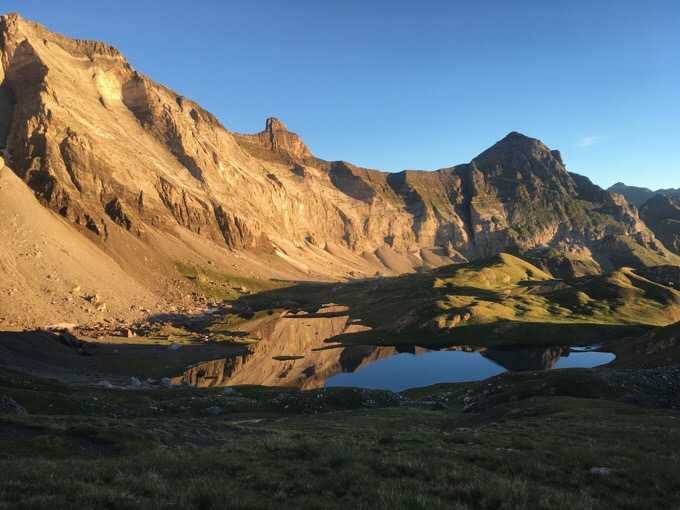 Then it was down the Valle de Barrosa. I took the least photos today of any day thus far in the Pyrenees. All the long climbs and descents today didn’t really change scenery as many of them tend to do as they wind down. 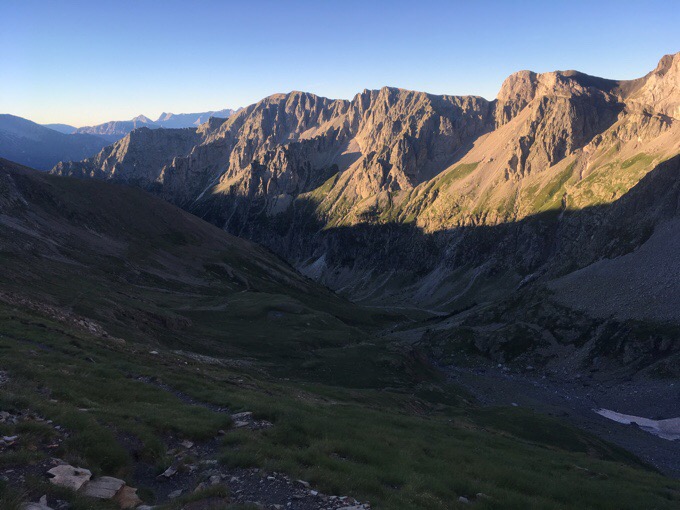 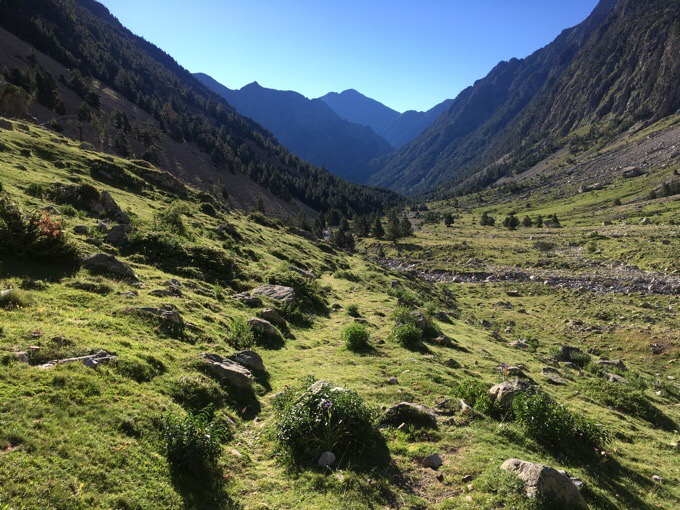 At the floor of the valley, it was nice to get into some pine trees with a calm stream running along the trail. It soon turned to a gravel road for quite awhile until hitting a paved highway I walked on for an hour. 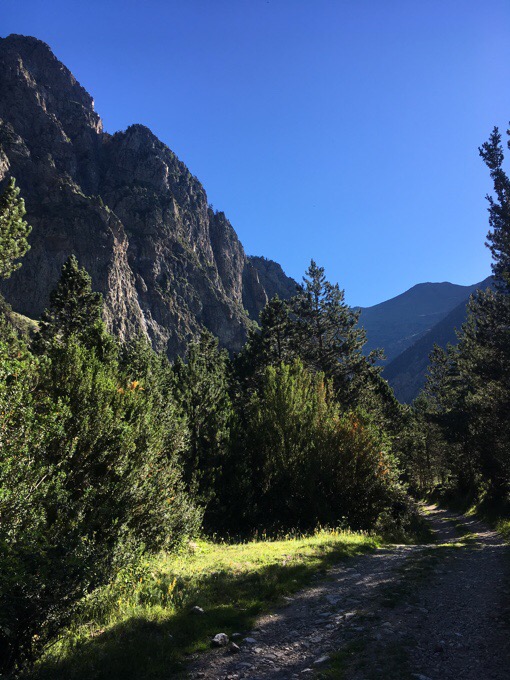 The guidebook mentions a grocery store along the highway, and that’s where I planned to resupply for the next four days. It mentions not going all the way into village of Parzan, but with the way it was worded, I didn’t realize I was going downhill almost a mile extra to get there and that I’d need to climb back up after filling up with new food. Not a major thing, but an adjustment of an extra two miles on quite a hot day. 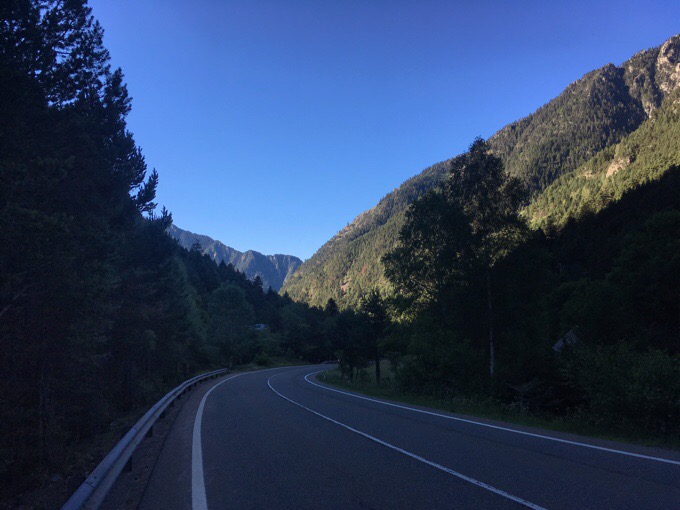 When I was nearing the turn to see the supermarket, a Frenchman doing another version of the HRP (who spoke little English) told me I was going the wrong way. I went with him a bit back up the hill before realizing I was doing the right thing to be able to resupply. Back down the hill I went. By then, the sun’s full force was heating up the pavement. 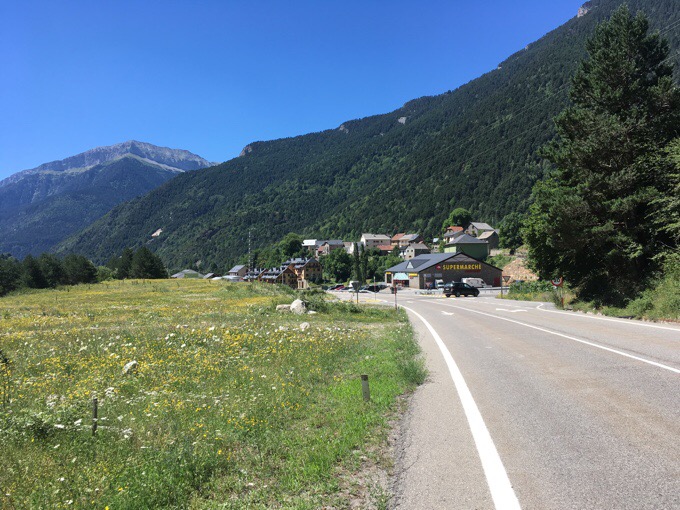 While at the supermarket, I grabbed more food for four more days. There weren’t any bars. Later, I did see some at what I thought was a liquor store near the supermarket because it had huge liquor ads outside. Neither store had a ton of variety. I have tolerated it since there aren’t any other options unless I buy meals at the refuges. I get the canned tuna, cheese, and pitas for lunch. There were no Uncle Ben’s rice dinners that I’ve been doing out here, and they also sold no sauce for pasta. That left me to buy the one dinner packet that resembled a Knorr Side. The dried fruit was a impulse buy. I don’t usually take to that, but I think if I mix it in with the peanuts, it will help me eat more. ﻿Hey, at least they had Oreos and chocolate pudding! 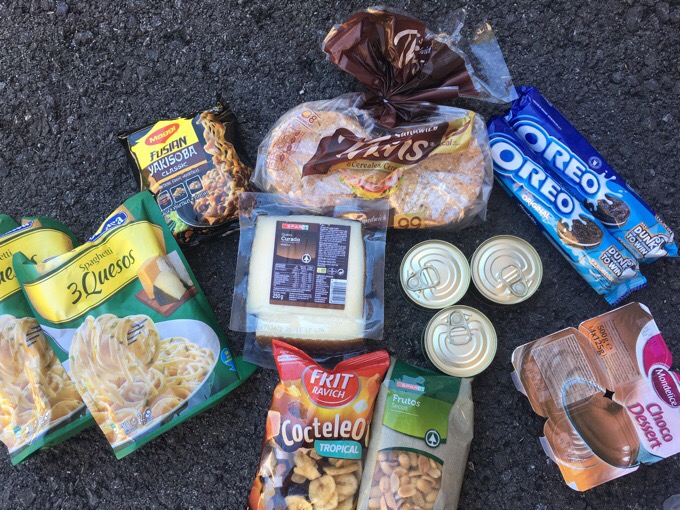 I ate outside in the shade of the building in the parking area. It was getting quite hot (90F/32C), and I was not looking forward to the 3.5hr hike back up in the heat. I got to talk to Why Not. She and Jim are taking a zero in Gavarnie today. This route is tiring with so much elevation loss and gain. I’m looking forward to a zero at the end of this leg. I also got to talk to my host at the end of this leg. His name is Paul, and he checked the weather in more detail. The thunderstorms are now no longer expected at the end of this leg, yay! Now I don’t have to push, and I can take my time over the next four days or so. Weather can always change out here, so they may return, but I’m happy to not push. The end of this leg is the toughest stretch of the whole route, so it’s great to not have to add the stress of pushing through it. I can take my time, yay!

Knowing that, I took a nice long lunch break before hiking out. It was good to have cell service and get the blog up and get some correspondence taken care of. I regrettably ate three pudding cups. I couldn’t help it, and gave the fourth one away. Although it hit the spot at the moment, I paid the price and felt it with a side cramp the whole 3hr climb back up. It was on a dirt road, which is like a wide trail to me. The sun was intense, and I was so happy to have my umbrella. The remainder of the day was on the GR11, which I heard had a lot of ups and downs. Everything out here isn’t flat, but I’ve especially heard of the long ups and downs of the GR11. 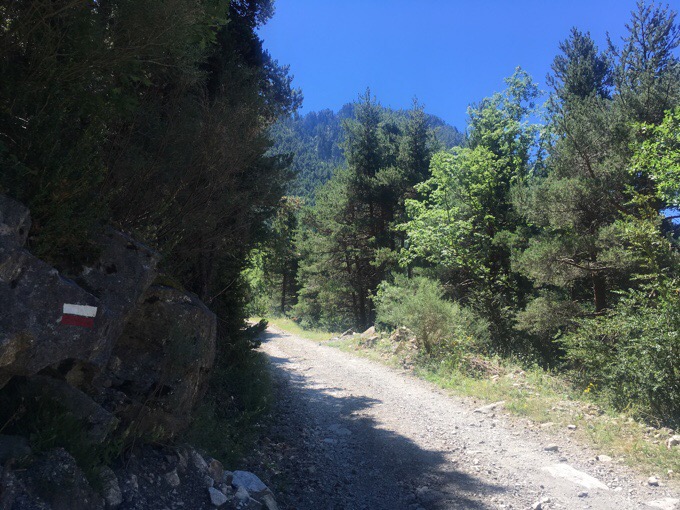 It was a consistent gradual climb with no change in view in a canyon. I was dripping sweat and needed a distraction while I monotonously put one foot in front of another. I ended up getting two episodes of Breaking Bad in as I walked. Hey, what can I say, it was good multitasking trail. I met one GR11 hiker walking the opposite direction as me, and he had never seen a hiking umbrella before. He immediately loved it given the conditions and took photos and information on where to get one. It was such a morale boost for me to have that shade today. Even with all the heat, I will always be grateful for a day without rain out here. Somehow I’ve made it two weeks with a little bit of fog and one overnight thunderstorm that only lasted 45mins. The other day it rained, I was in town. If sun is all I use my umbrella for, I’ll gladly take it! 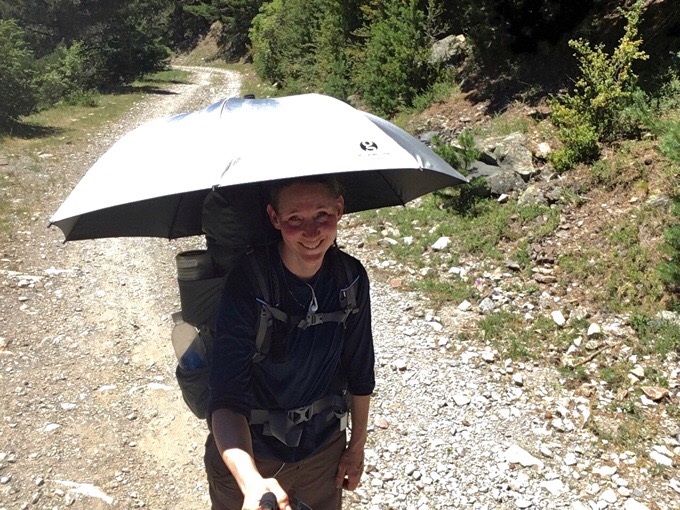 It was over 3hrs of uphill and 4022ft/1226m. When I got to the top, there was a sign that actually indicated distance. It had been about 7mi/11km. It totally drained me. I drank a ton of water, which didn’t help the side cramp as it all jostled in my stomach. Mental note, don’t eat a ton of chocolate pudding before a 3hr climb in 90F/32C heat.

Next up, was, you guessed it, an immediate looonng down into the next valley, the Vallee de Gistain. This one had some variety with some up and down thrown in there. There was trail, but some of it had loose dirt and scree, which my wobbly legs didn’t do well with. Then there was more of a gravel and dirt road. One thing I will say about the GR10 and GR11 that I’ve really enjoyed is that when there are switchbacks on roads, rather than just following the road, they’ve gone out of their way to construct trail that cuts the switchbacks. That rarely happens in the US as they would just take the road as the trail and not bother with constructing anything new. The path today cut every switchback it could, and I appreciated the time and energy saver. 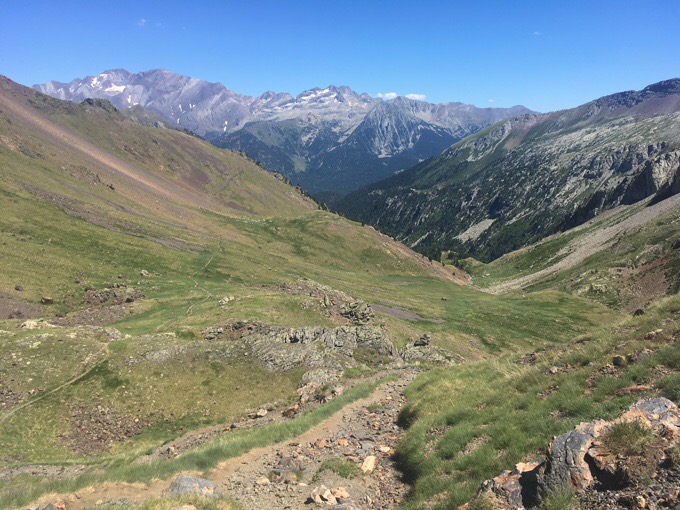 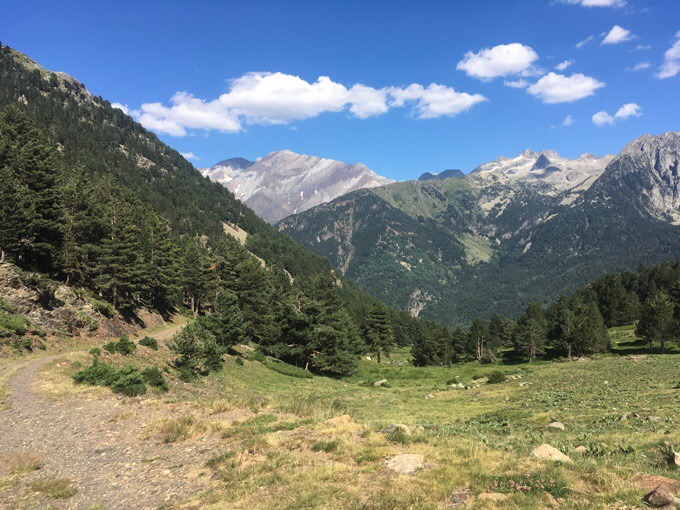 I made it down 3451ft/1052m before I called it a day. There is a more formal camping area 30mins or so further, but I was done and it was already 6pm. Plus, as soon as I hit the road to that camping area, there was actual traffic. It is still a holiday weekend and I bet it’s packed. I found a hidden spot just below the road, out of sight, and along the Rio Cinqueta. Being able to rinse off all the sweat in the river was heavenly! 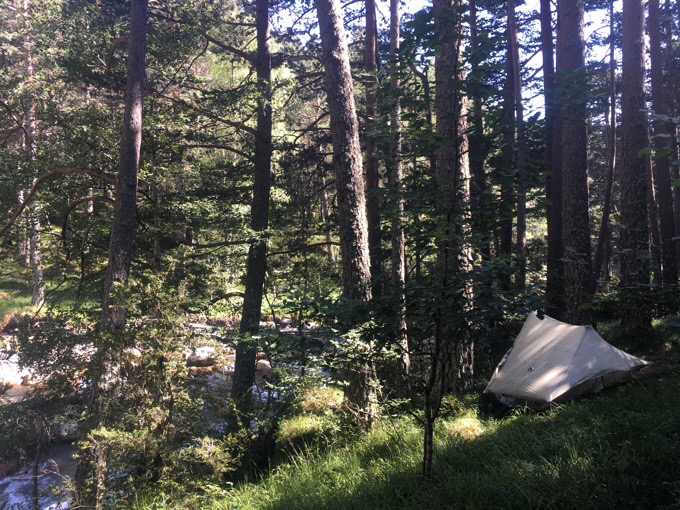 I made a very stupid and lazy mistake tonight. With how hot it was when I setup, I didn’t blow up my air mattress (NeoAir) or pull out my sleeping bag until later when it cooled more. There were plenty of little flies and bugs, and I was being lazy, so I didn’t get out of my tent when I did bring them out. In the process of getting my sleeping pad in the right spot, I sloppily lost my balance and put my full body weight on the back walk of my tent. I heard a tearing sound and knew immediately it was bad. I took a deep breath and turned to see I had torn a hole right in the middle of my back wall the length of my hand. Dammit! I was too tired to deal with it, so I taped it shut temporarily with medical tape for the night. Looks like I’ll have a sewing project to tend to tomorrow. Really careless move on my part, ugh. The white noise of the running river is great for me, so I’ll be sleeping hard tonight for sure. Whew!﻿ 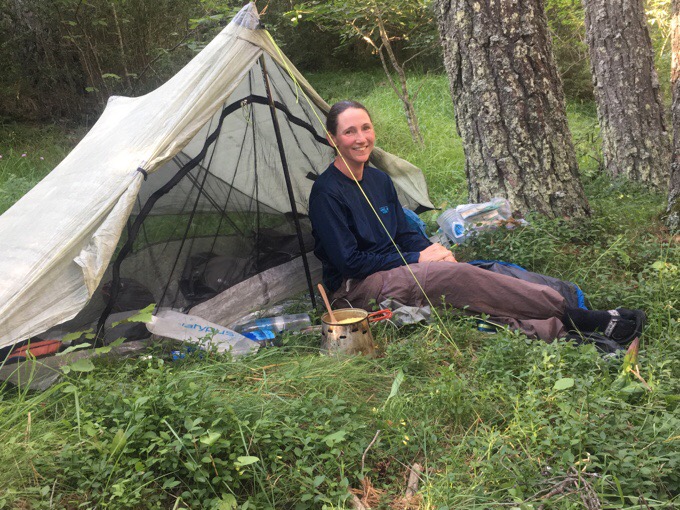