I slept ok last night having just a couple times when the wind kicked up and woke me up. Today is the toughest day of the whole route. I’ll give fair warning to people that I’ve been doing about 1.5 days of the book’s recommended itinerary each day, so anyone gauging pacing, know this is more than the book requires for a day. Overall, the book is on Day 22 while I’m personally on Day 17. It’s a combination of being slightly faster than book time and putting in more hours than the ~7-8hrs of hiking the guidebook tends to average a day. 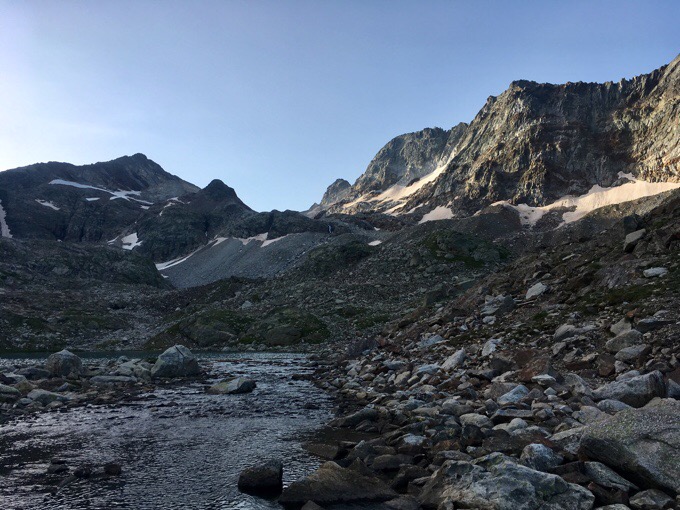 Up to Col des Gourgs-Blancs.

I wasn’t quite sure what to expect, other than alpine conditions with steep ascents/descents, lots of rock, and some snow fields. I was a little anxious, but then figured it couldn’t be as grueling or sketchy as the Sierra High Route I did last year. Why Not was with me on that one, and I think we may agree that it set quite a bar that neither of us need to meet again. However, it is nice to have done something like that just to know you can, and it makes everything else seem simpler. The SHR was basically three weeks of today on steroids.


There was no warmup today as I’d already hiked up the easier stuff yesterday. It was right up the scree. The steepness wasn’t really an issue as much as the rocks for me today. I am fine with it in sections, but when I’m on rocks most of the day, like today, my mind and body gets tired. Particularly my bad ankle, the one that had major surgery over a decade ago to repair a severed ligament. It is forever wobbly and unstable, so unstable footing is especially a challenge for me. I am aware with every step of my life to position it so my toe points out, and it doesn’t roll. Yes, I’m sure that’s great for my knee and hip, but they haven’t complained yet… The problem with scree is that there’s no knowing if what I’ll be stepping on will be stable. Often times with scree, rocks shift or wobble randomly when you apply pressure. When that happens in the wrong direction, my bad ankle goes out on me and rolls. I’ve gotten good at using my polls to compensate so I don’t fall, but there was a lot of that today, and it got both painful and anxiety provoking wondering if each step would hold. Especially because there was a lot of downhill on the rocks, which are most worrisome as I need put my full weight on them not knowing how stable they will be. I should have worn my brace, but I was hard headed and I’ll be wearing it tomorrow as the ankle is sore and weak after so much of it today. 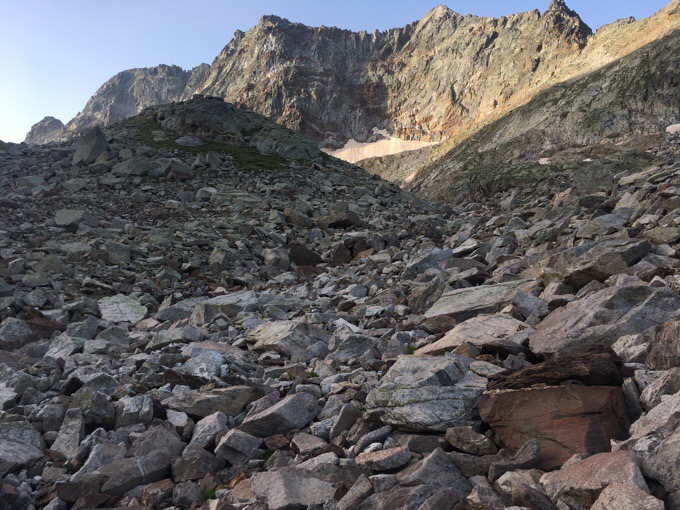 Back to the first climb up to Col des Gourgs-Blancs. It was fun in the morning air and with fresh legs. I saw three others as I went up. 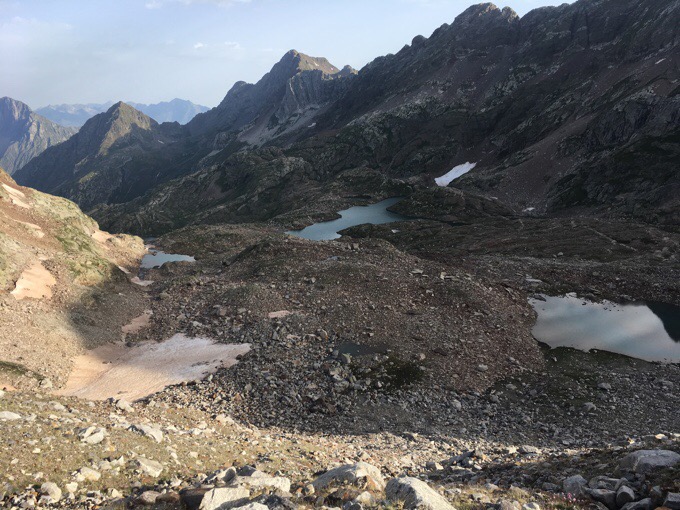 Looking back. I camped by that lake.

Once up to the col, there was some snow and then a more level stretch on bigger rocks with cairns that were helpful to guide the way. 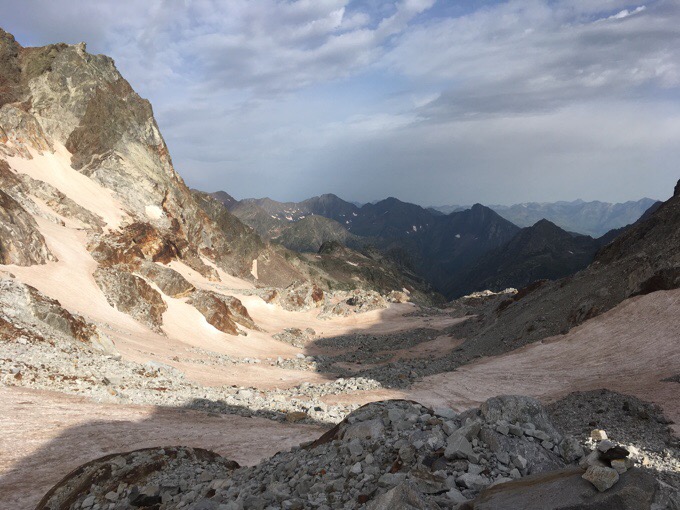 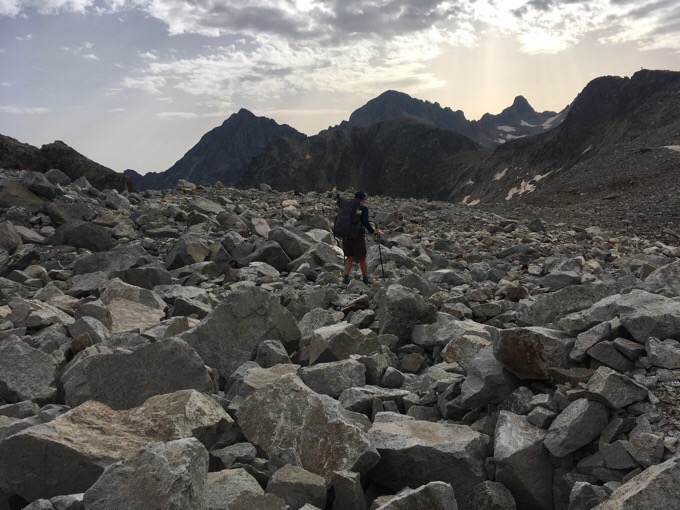 Then came the first real need for microspikes on Col du Pluviomètre. It looks steeper than it really was. The snow was a good consistency to feel comfortable gripping with the micros on. There were four people coming down with crampons on (much bigger spikes) as I approached. I think going down would have been more intimidating. 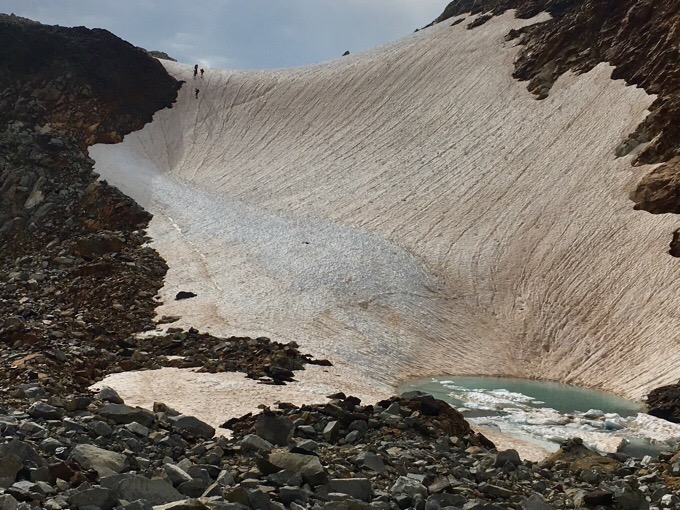 Once I was up top, I saw a snow chute and was happy to have something quick to go down other than the rocks. I saw footprints that someone else had done the same thing, and didn’t even think to double check my positioning. Once at the bottom, I realized had gone down to the wrong side of the lake. Argh! I knew better than that! What made it worse was that due to terrain, I couldn’t just walk around the lake to fix it, I had to climb back up as I went around. I wasted a good 30mins of time and energy because of this mistake. It should have been a nice walk on an almost level plateau before I dropped down. Apparently, I needed to add in an extra down and back up. Ugh. 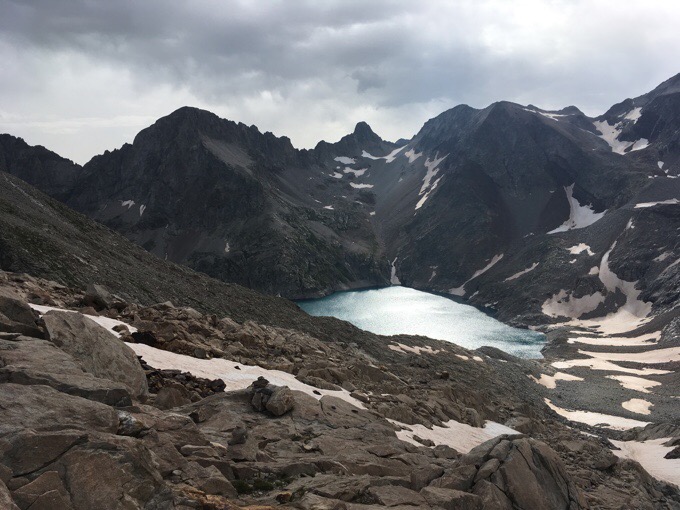 I went down to the right instead of left.

Once I did get to the correct side, it was a steep down to the Refuge du Portillion, next to the dammed part of the lake. People must get confused a lot here because they had helpful big orange flags to guide the way. In the photo, you can also see the climb right back up that leads to the highpoint of the HRP. 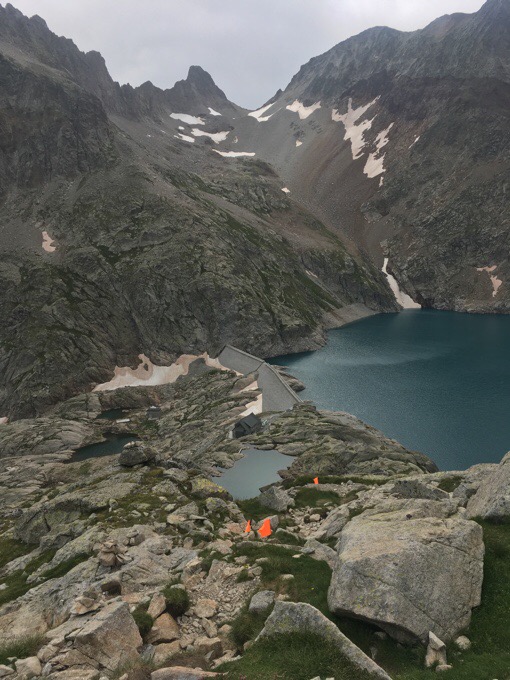 See the refuge at the bottom by the dam.

I checked the weather one more time at the refuge, and they confirmed light rain tonight, but fine for the day today, sweet! 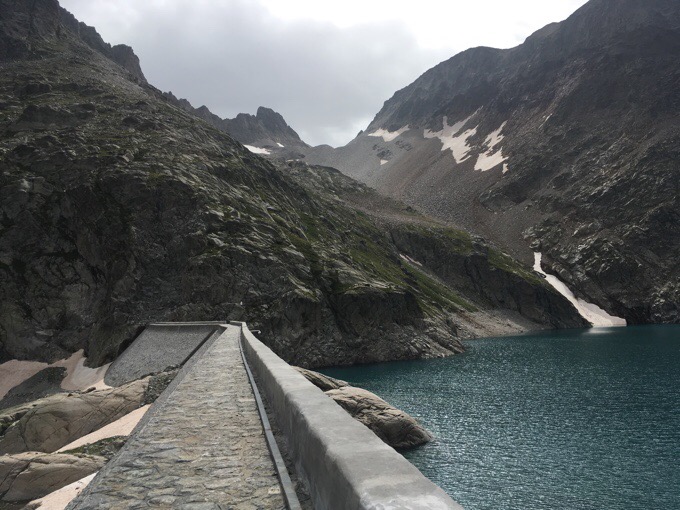 The climb up to Col Inférieur de Literole, the highest pass at 9787ft/2983m was enjoyable with switchbacks and then a snowfield. The whole way back I could hear rockfall and the glaciers cracking from behind me. It echoed and sounded like people were hunting. 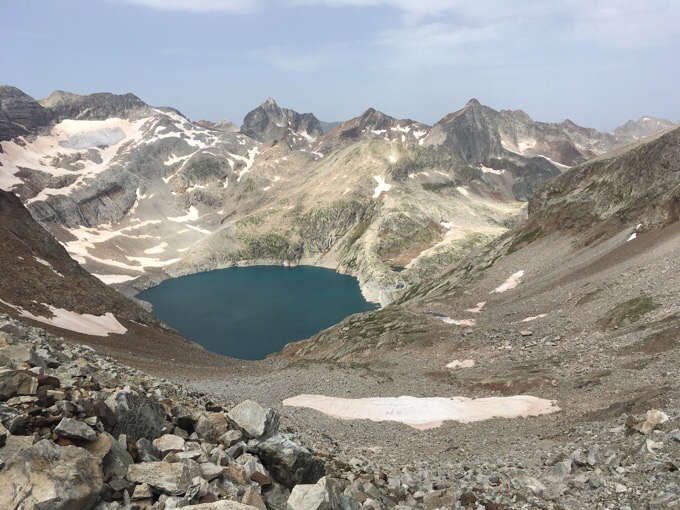 Looking back after climbing up.

I got to keep the micros on for the descent, which I triple checked to make sure I was right this time and not just automatically following the group ahead of me. It was steep at first, but the group just ahead of me made it easier with good foot holds pre-made for me. 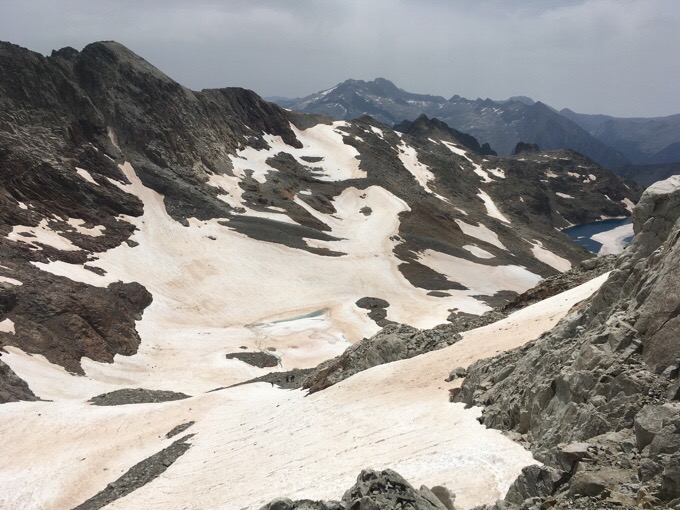 I headed down below where the people are standing in the center.

Once down far enough, I had lunch on a rock. It felt like I was pretty remote, but I was apparently the intersection of a lot of things as I randomly saw people walk by coming from all directions as I ate. After that, I kept the micros on a bit longer traversing above Lago de Literole, which was in and out of snowfields and well cairned. I noticed my feet were damp from the snow. This is the first time on this trail my feet have been wet! Anyone who knows what I went through in NZ and AUS last year knows how great it is that I went two weeks with dry feet! 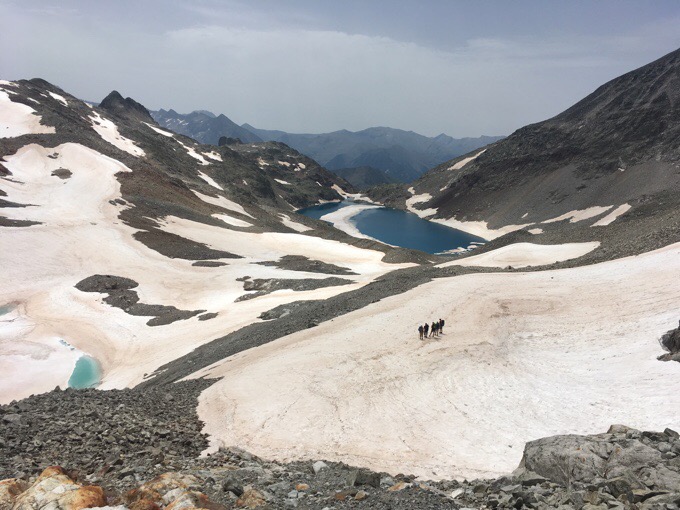 Then the snow ended and the long downhill began on what guidebook describes as “chaotic granite wilderness”. I do want to take a moment to thank Ton Joosten for writing this guidebook and creating this route. There are many versions of the HRP, but this is the one in English and I’ll be biased and say it seems to be the best, haha. There is an updated version in process by the new author taking the helm, Tom Martens, but for the most part the book is on point. Also, I wouldn’t be able to do this if it wasn’t for the excellent track that was publicly posted by a couple named Amy and Jim in 2010. It has been passed on from year to year and is still the best track we’ve found. Again, that can be found in my resources for this route. 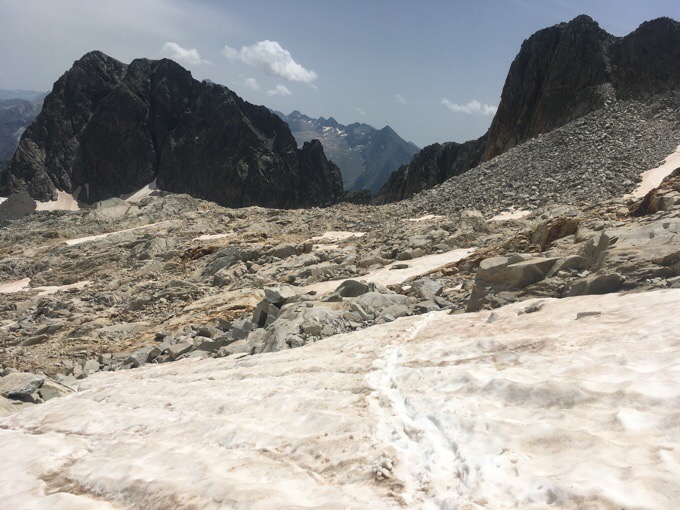 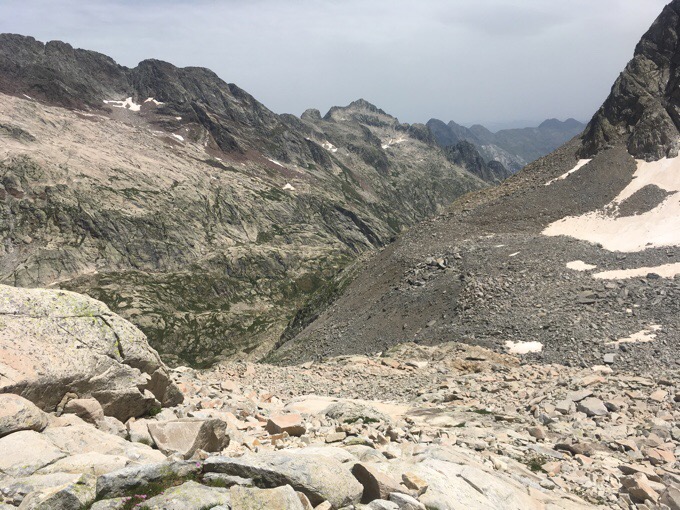 Down to the Valle de Remune.

Anyway, the downhill to Valle de Remune was where I really felt the cumulative wear and tear of the day. It just kept going and my legs and mind were wobbly. Even when I hit the stream, the rocks continued.

I celebrated actual trail at the bottom of the valley, but even that was short lived as there was still another hour or more of uneven grassy rocky terrain along the stream. 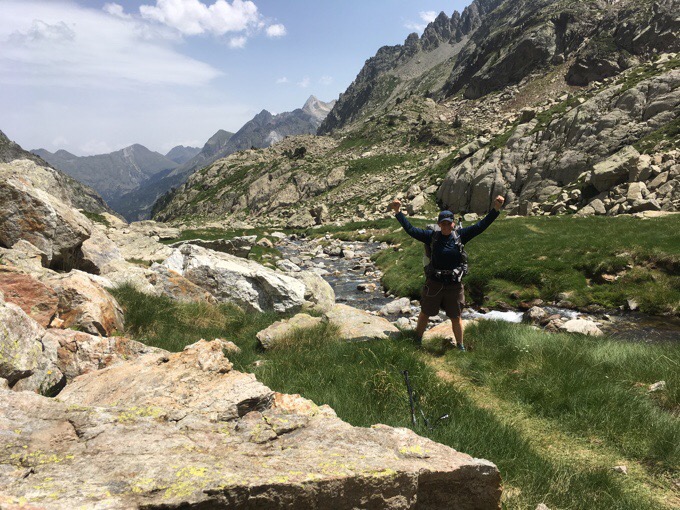 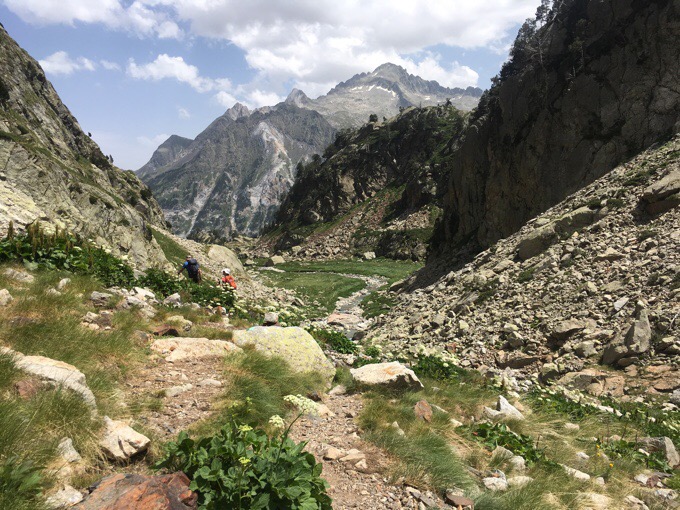 I hit an area where tourists stay and got service. I called Paul who will be hosting me and told him I’d made it far enough to make it to him tomorrow night. That’s been my hope in doing these longer days. I’ll make it tomorrow night and then get a full zero the next day, yay! I also took time to upload the blog from the last two days. It turned out that Why Not and Jim were in Parzan for the night, so I got to talk to Why Not and give her the good news that this section is not a steep or grueling as what we did on the Sierra High Route last summer.

By the time I finished all that, it was already 5pm. My planned endpoint of a refuge, which is the end of the guidebook description for this day, was still 2hrs away. I decided I’d walk the Valle de Esera, grab some water, and then camp earlier than planned. Not earlier in time, but in location. As I walked, I found myself surprisingly energized with a second wind. I was on clear smooth trail and my body was loving it! 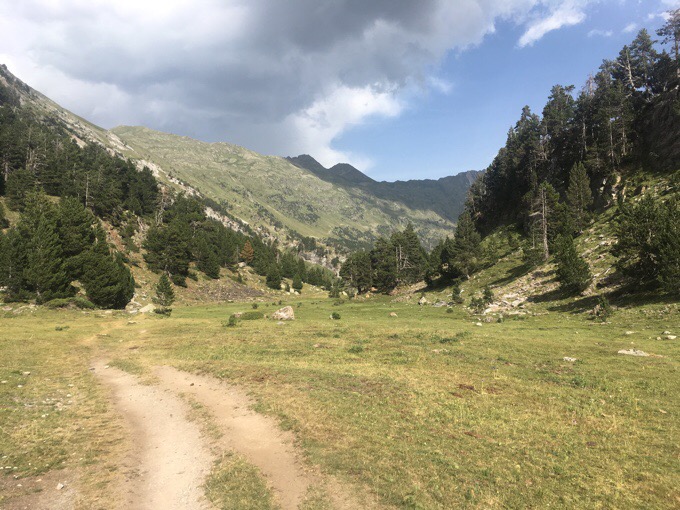 Plus, the valley was a cow pasture, the water wasn’t appealing, and there were no camping signs clearly posted in the area I had hoped to stop. I saw a sign that I was only 50mins away from the refuge. Since I felt good, and it might rain tomorrow, I figured I’d make it a longer day and hike while the weather and my body was good. Plus, that gave me time to listen to an episode of the Harry Potter podcast, which I couldn’t do on the more technical terrain today. A nice end to the day. 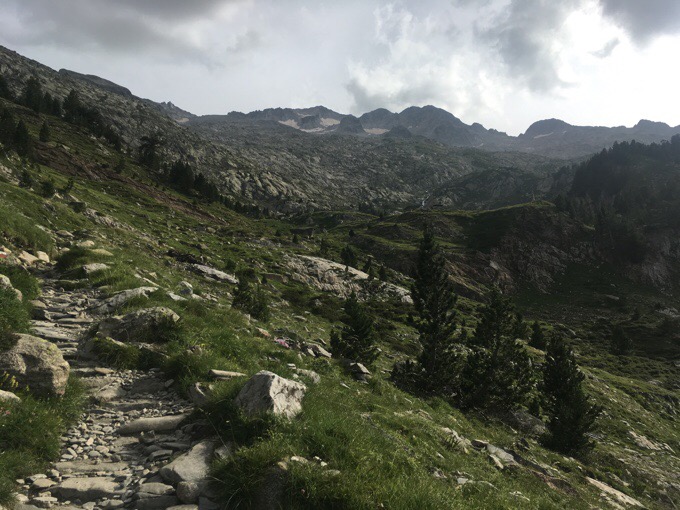 Refugio de la Renclusa on the plateau in the center.

I got to the Refugio de la Renclusa at 7:10pm and setup in a field with many other tents. All were gone for dinner in the refuge, so I still got the space to myself for over an hour. That was nice. I setup for the possibility of rain overnight and wished there was something more protected, but I knew the rain was supposed to be light. 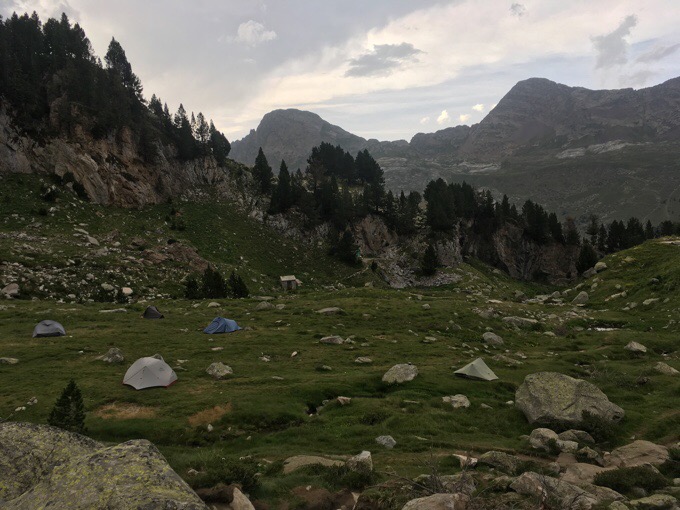 The tent I’ve seen the most out here is this one. It is a Quickhiker Ultralight. Quite popular out here, but I don’t know the specs on it. 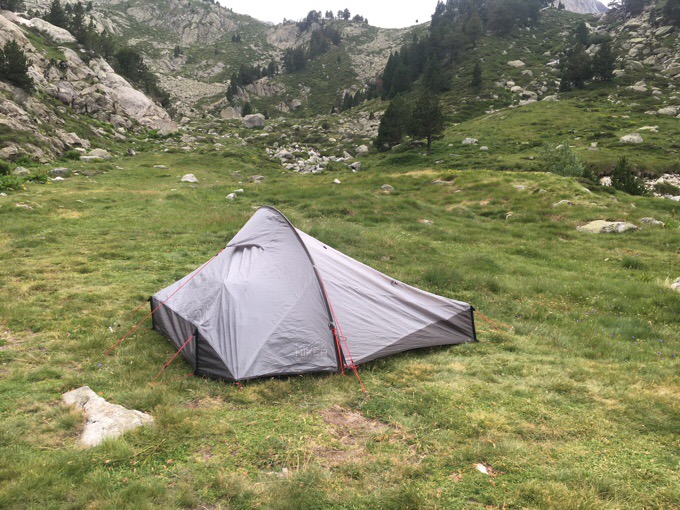 As I looked over the route for tomorrow, I notice the first sentence says to backtrack BACK DOWN THE TRAIL. WTF!? I looked at the maps and GPS. This refuge, though described as part of the route, is a .6mi/1km out and back. 40mins up and like 30 down tomorrow. I just walked UPHILL and extra kilometer to camp in an open field with a bunch of other people! Had it been midday, I would have totally blindly made the walk here, then turned the page to read the next chapter, and realized I needed to turn right around and go back down the switchbacks I unnecessarily went up. There is no warning of this at all, so heads up to future hikers. Not a big deal in the whole picture, but at the end of my long day, it was not fun note to end on. Tomorrow is described as a “magnificent stage” so I’m excited about that as I finish up the first half of the route tomorrow and will be taking a zero to celebrate the next day.