July 19th
Refugio de la Renclusa-Hospital de Vielha
*No mileage available. The guidebook lists distances on the route by time rather than miles.

It rained a bit overnight, but just lightly and in brief bits. It was even raining on and off as I packed up, but I was getting used to the pattern that it would happen lightly for a few minutes, sometimes harder if a gust came, and then go away. It seemed it would do this all day, so I packed up and managed to pop out in one of the dry periods. It did rain on and off through the morning, but again just for a few minutes and then it would stop. Nothing that really got me wet. It was cooler and so windy that I wore my rain jacket most of the day. 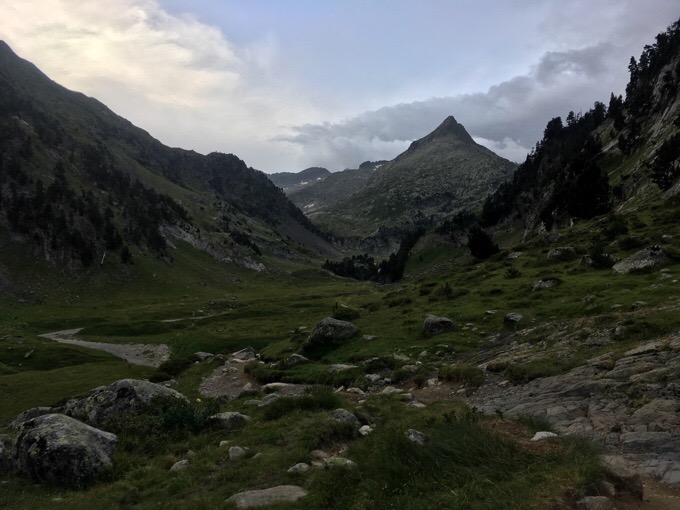 Today started off nicely (even though the first 30mins was walking back the way I came last night!), but was anxiety ridden because I knew I was headed to THE crux of the trail for me. The Coll de Mulleres. I’ll get to more on that, but first, it was a morning of gradual climbing with actual plateaus that broke up the climbs. It was really enjoyable! 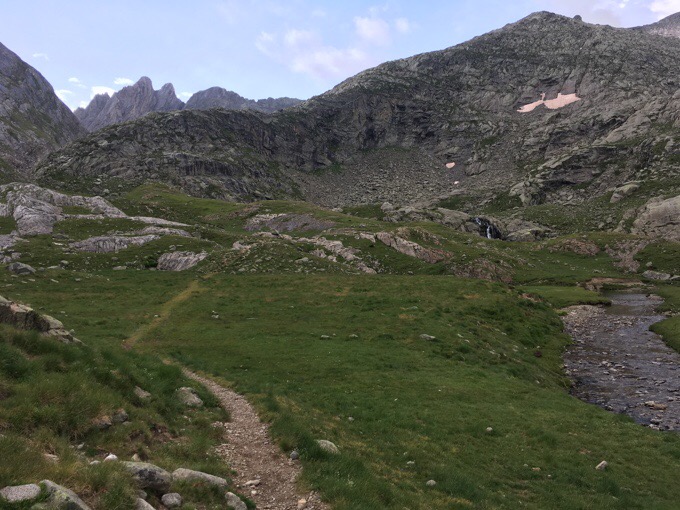 It was great alpine scenery and terrain with the most variety in one day I’d say. The wind made it more taxing, but still really enjoyable. 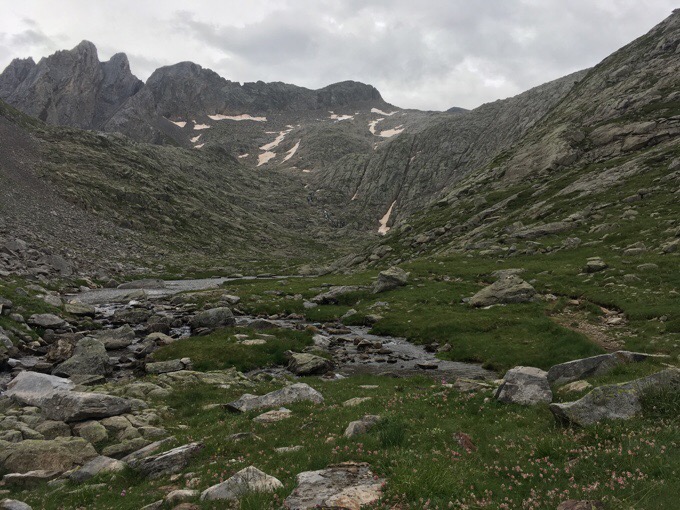 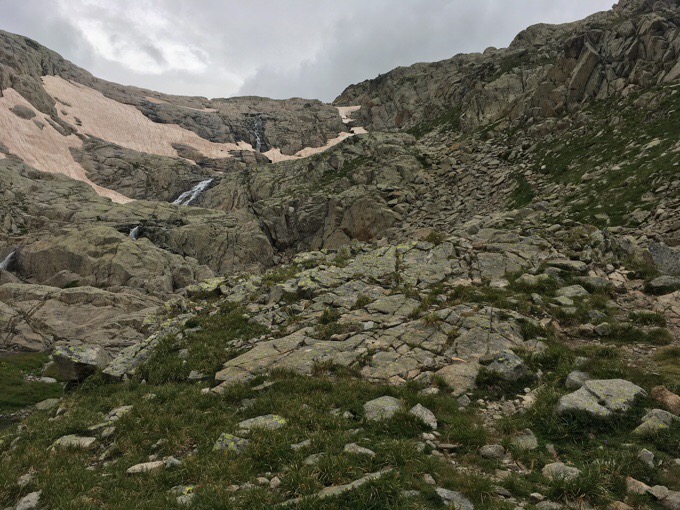 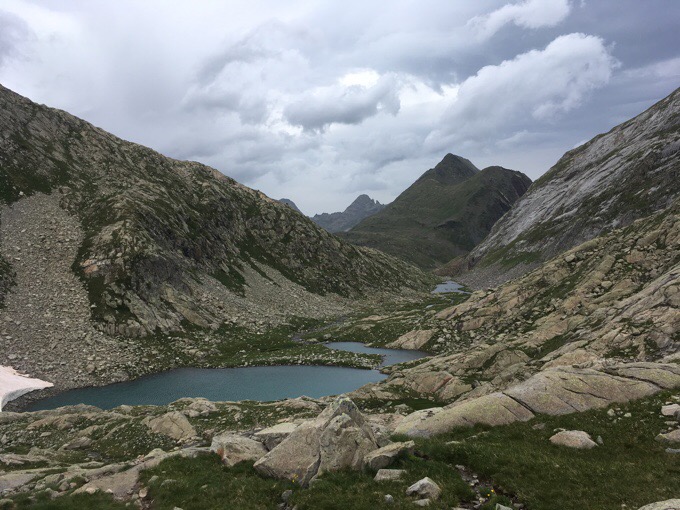 Looking back on what I’d hiked.

I especially liked the last part leading up to Coll de Mulleres. It was granite slick rock, which reminded me of stretches in Utah I’ve been on. Looking back, I could see darkness, but magically, it was clearing for me as I neared the pass. 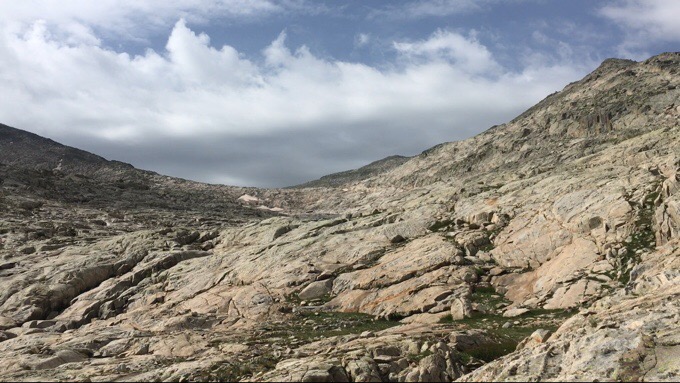 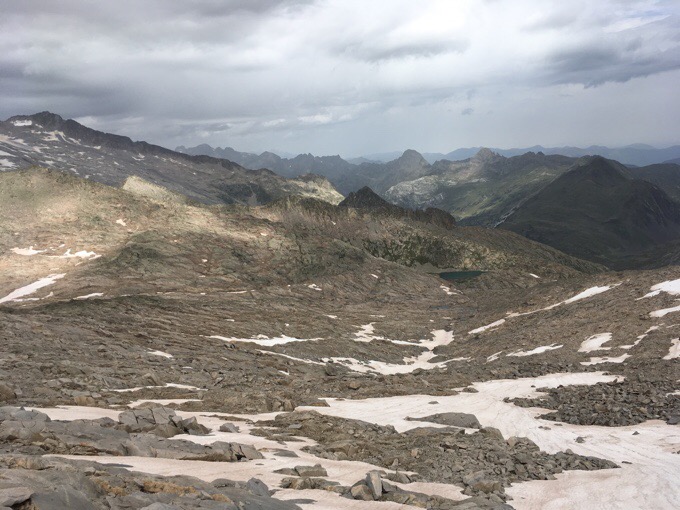 I was just barely dodging the dark weather it seemed. Here’s a video of how Pyrenees weather can be.

I didn’t know what to expect for Coll de Mulleres. There were a group of men well ahead of me I could see on the ridge also confused and not sure what to look for as they seemed to search around. I had a track and it was confirmed when I saw they also crossed the pass at the same point I was headed to. I was expecting to deal with some sort of steep snow situation, but to my disappointment, it was not snow, but an exposed scramble that made it challenging. I’m not a fan of those at all! Here’s an image up top and at the bottom once over it. I was given advice to go to a notch or two left of the cairn and did that, but DID NOT like it. 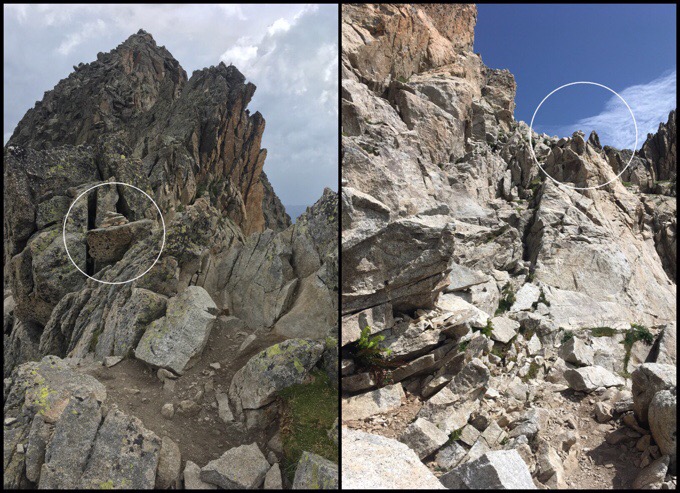 It was like a knife edge and it was just the first couple of moves getting over and down the other side that were intimidating. The strong wind gusts were not helping at all. When I would pop up over the edge, I’d get knocked by strong wind gusts and duck back down trying to come up with a strategy. Every time the wind would calm, I’d pop up and explore a bit more to see what I was comfortable with. I could see the men down below and kicked myself because had I arrived 10mins sooner, I could have had done this with others. 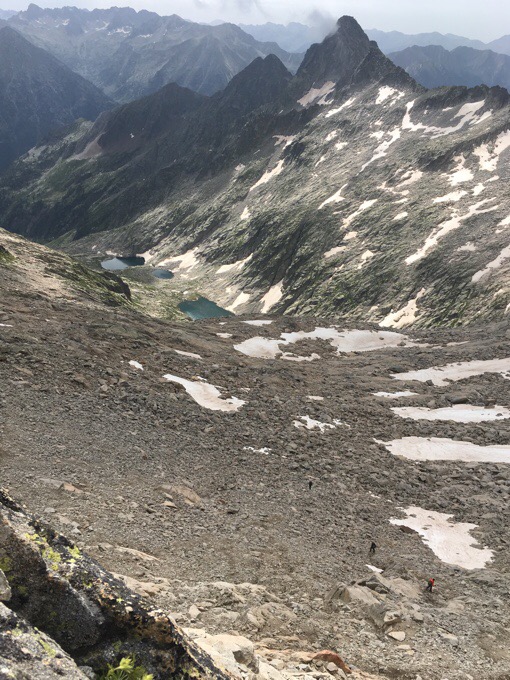 Men hiking away on the other side (actually dropped too low and should have been traversing left).

I saw two other men approaching the pass and coming towards me, so that was a good backup plan if needed. I was too short to go over and reach the ground where the cairn indicated. I’d been told there were “easy” steps if I went just left of the cairn, so I explored that option. The gusts were very nerve wracking and I was not comfortable going over with my pack. The hand and footholds were great, but the angle and winds made it difficult to do with a pack on. After multiple attempts and retreating when gusts picked up, I realized I could easily do it without my pack and just needed to figure out how to make that happen. Normally, I’d have someone to pass the pack to, but not at that moment. I found a spot to securely put my pack within reach so that I could go over without my pack on and then put it back on once in a secure spot. I was both relieved and proud when it was over. After those two moves to get over, the rest was basic, whew! I got photos of the guys that went up after I did to see it from that side. It would definitely be easier to go up than down. 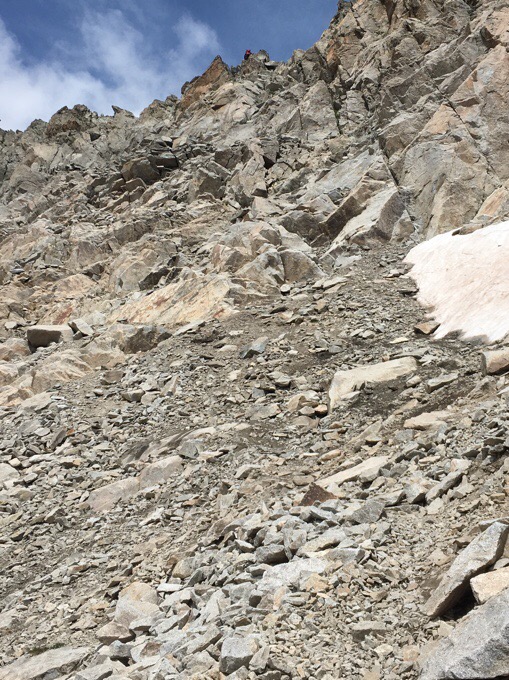 I worked my way down rocks using cairns to get lower in the valley and out of the wind. I had lunch above the largest of the Muelleres Lakes. A great spot to relax and be happy that pass is now behind me. I’ve now completed the first half of the HRP and the crux of the trail, whew! 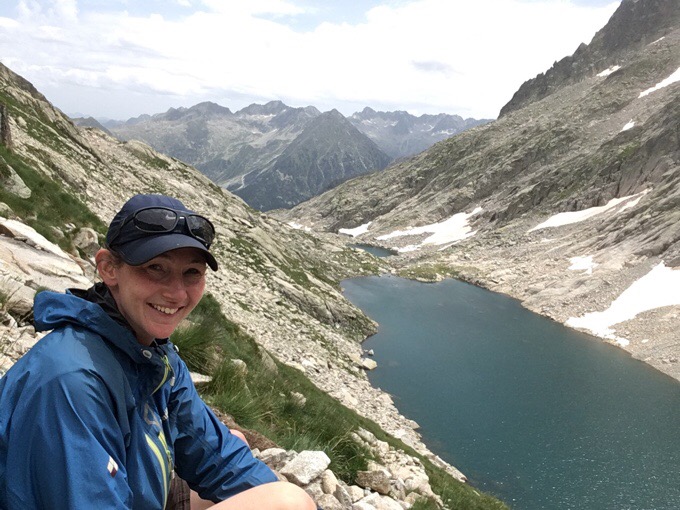 Not a bad lunch spot.

The final task of the day was to complete the descent into the valley to the Pleta de Mulleres where there is no longer a refuge and really nothing there but a parking area. I was hopeful to walk in that nice grassy valley, but the trail stays on the ridge on, you guessed it, rocks… 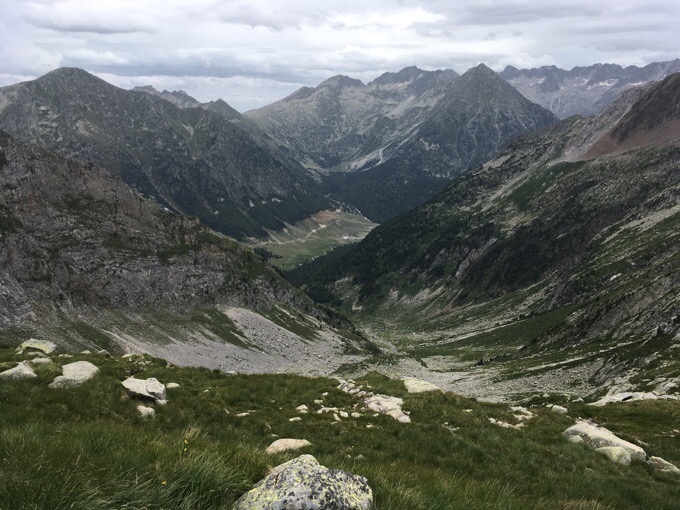 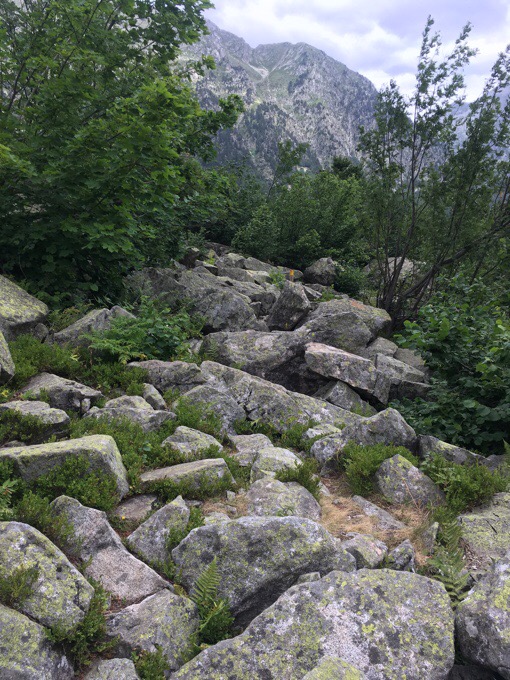 On the way down, I ran into another HRP hiker going the opposite direction. His name is Fabian and he too was halfway having started a day before me at the Mediterranean Sea. It was really fun to see him right at the halfway mark having hiked almost the exact same number of days. He was wearing Gossamer Gear’s newest pack, the Silverback! It’s smaller than mine (Mariposa) and similar to the Gorilla, but tougher material on the common wear points, so a bit heavier. It is amazing to see any lightweight gear out here much less a pack that is from the same company as mine. He also had the same Fizan hiking poles I use. It is his first long hike, and he definitely did his research getting the best gear and even making his own tarp. 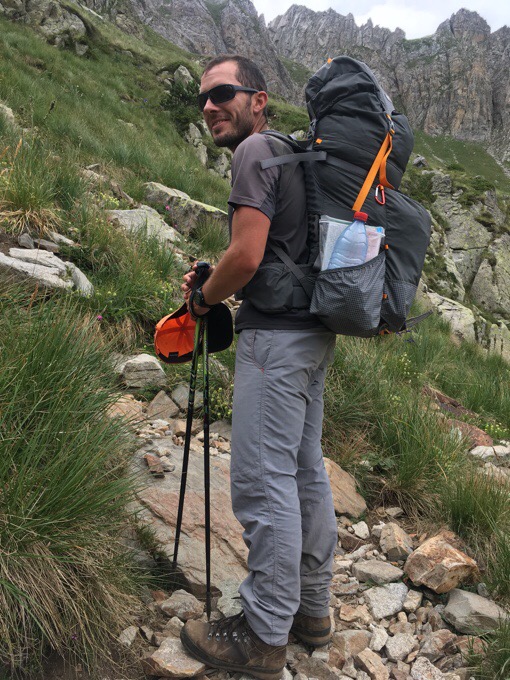 For many people that reach this point, they can choose to try to hitch to town or go two more days to the next resupply point. It’s not an easy situation either way. I am incredibly fortunate to have a blog follower that lives about an hour away that offered to host me for a zero. The timing really couldn’t be more perfect. I’d been in contact with Paul and Chantal via my inReach, so they were waiting for me when I arrived at 3:30pm. They had a sandwich, fruit, and delicious pastries for me to have on the ride to their house. They live in the small village of Cier de Luchon, just outside of the touristy Luchon known for hot springs and vacationing. Their home is amazing and the perfect spot to relax and take a well earned zero. My knees are thanking me for the break! 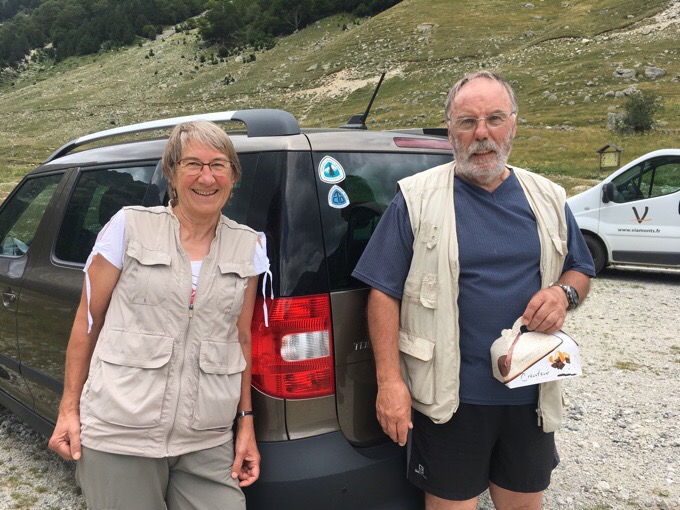 I met Paul and Chantal in 2012 when I did trail magic along the PCT at Crater Lake. My blog was one of the ones they followed in 2011 in preparation for their own hike. Paul did the PCT again in 2014, they did the Colorado Trail in 2015, and last year did most of the CDT. Gotta love the trail community! They will also be hosting Why Not and Jim when they arrive in a few days. THANK YOU to Paul and Chantal!!! 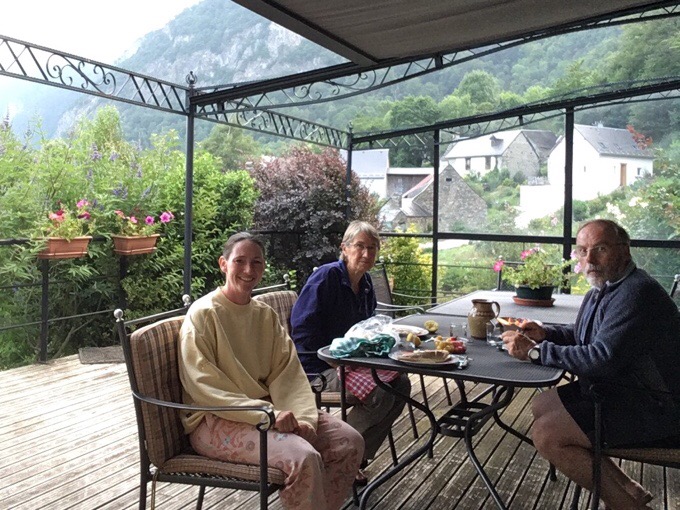