I woke up pretty groggy and a bit dizzy this morning, but the more I hiked, the more I felt back to normal, or close enough to it. Again, it was a nice relaxed day to hike, and I appreciated that. My goal for the day was to make it to the village of Salardu around 2:30pm to meet Paul and Chantal who were bringing me a 7 day resupply. Since it is Sunday, the small supermarket there would close before I arrived. Thankfully, Paul and Chantal would be nearby getting Why Not and Jim from the trailhead, so we were able to arrange a time to meet in Salardu that fit with their schedule. 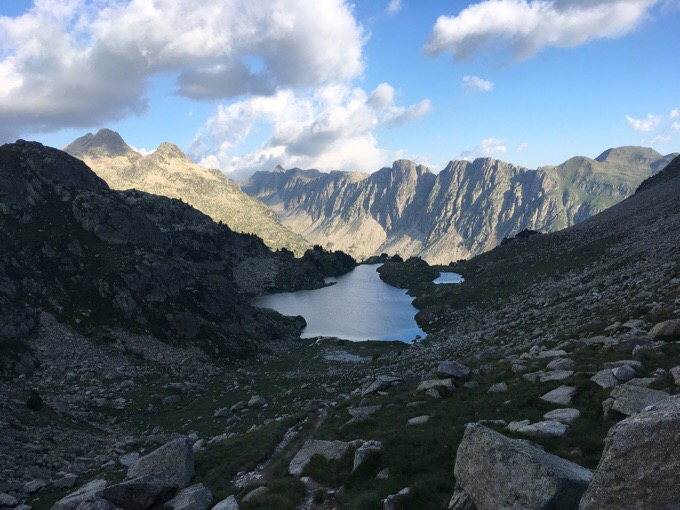 The morning started with a climb up to Coll de Crestada and another unnamed pass entering national park boundaries. Two days in a row with nice ascents and descents and beautiful scenic alpine lakes. 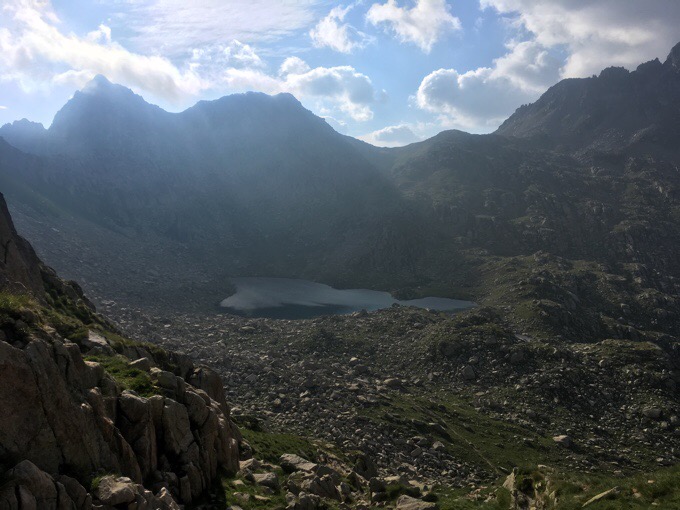 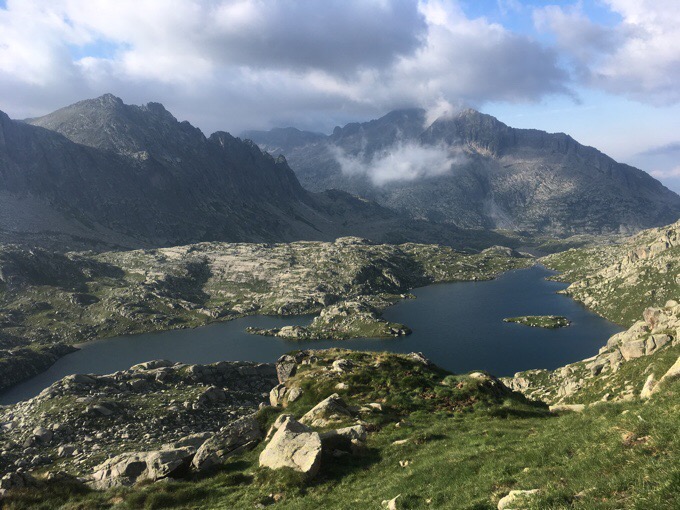 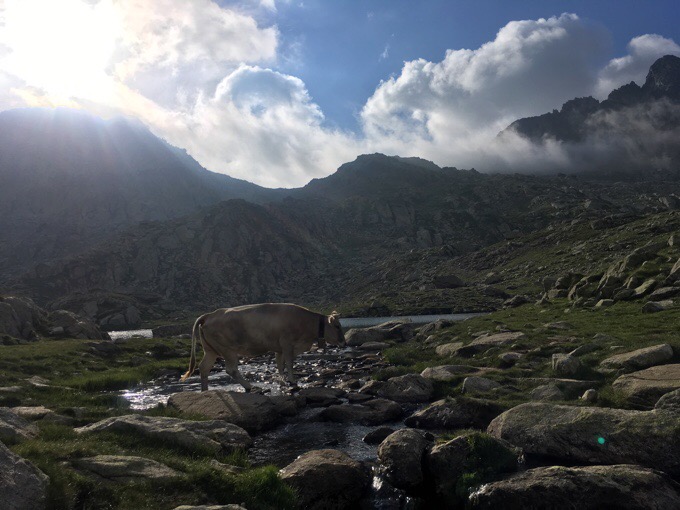 Then I had a nice long descent for hours that went down to Salardu. On the map, the route goes well out of the way to make this pit stop, but there really isn't a better option it seems before entering the longest stretch between resupplies on this route. 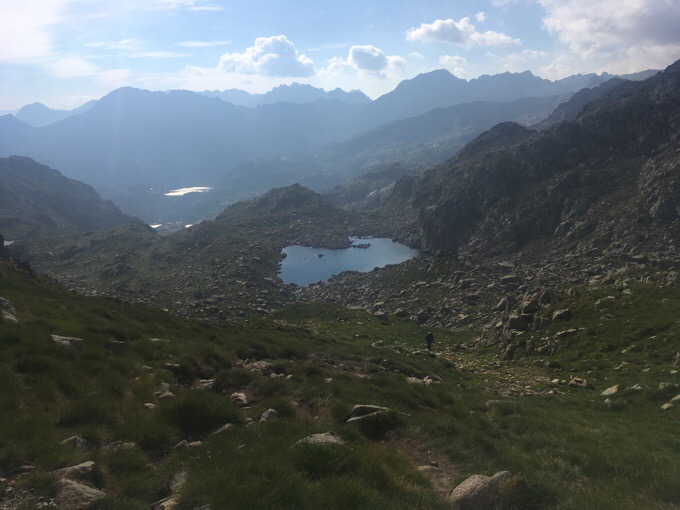 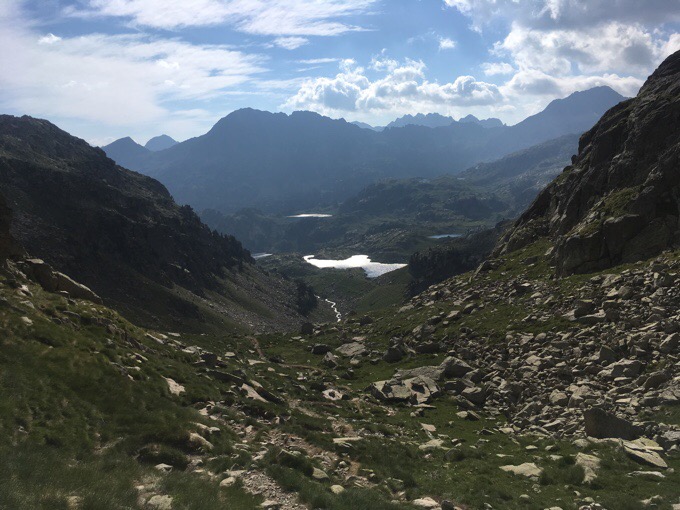 On the way down, I passed another refuge next to a dammed lake and got to go into forest briefly before a nice relaxed road walk for a couple hours. 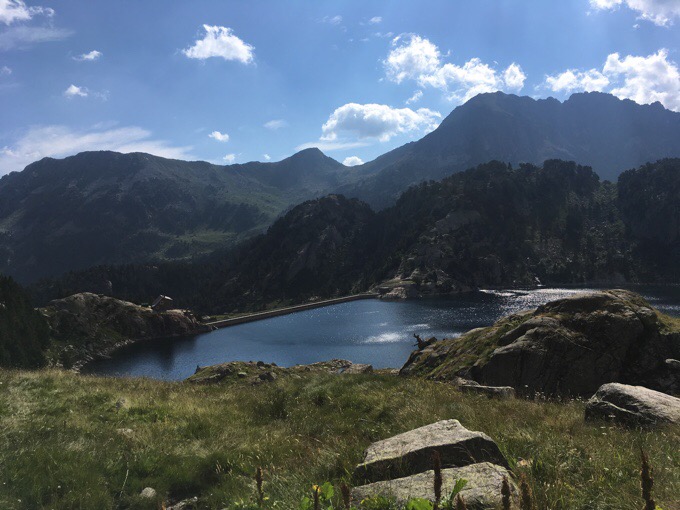 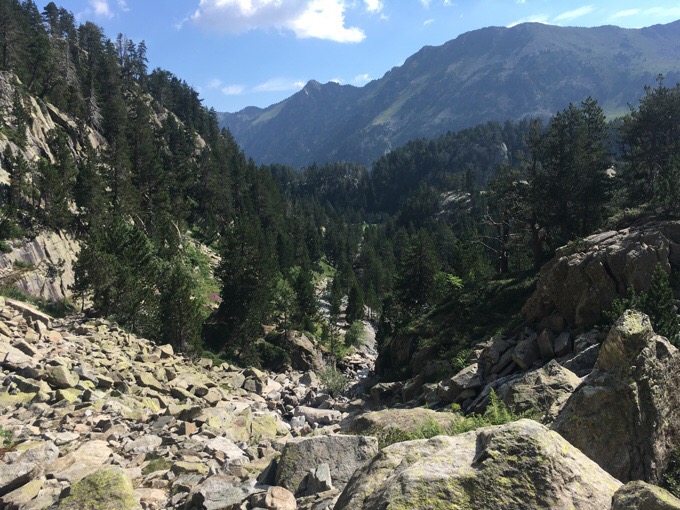 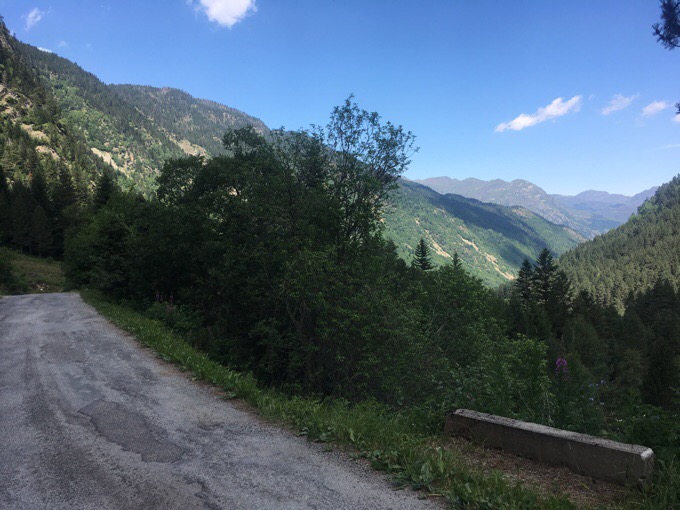 Not a super eventful day, but I enjoyed it and it was nice to be relaxed given that I felt crummy yesterday. I got to Salardu around 2pm and most places were closed, but it was quaint and cute. There was a little outdoor spot next to the tourism office that was open. They had wifi and I found a plug on the tourism building to top off my phone and external battery. I got a chocolate ice cream bar to be a patron. I was able to get yesterday's blog post up, and Paul and Chantal arrived with my resupply. Of course, they brought chocolate treats as well! Chantal even brought me new Dirty Girl Gaiters as a gift. They are white with little paw prints on them. I'll need to dirty them up ASAP. 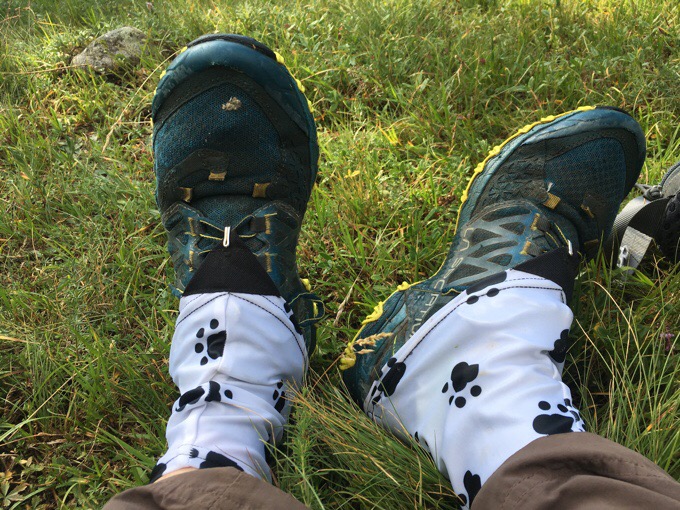 Although I'm not a big animal lover, I do feel that these gaiters are fitting in that they may bring me luck with the assertive sheep dogs and they may be tricked into thinking I'm one with them. Same with the cows as they look like cow print to me too. THANK YOU SO MUCH to Paul and Chantal! You can see how their hosting continues with Why Not and Jim on Why Not's blog. 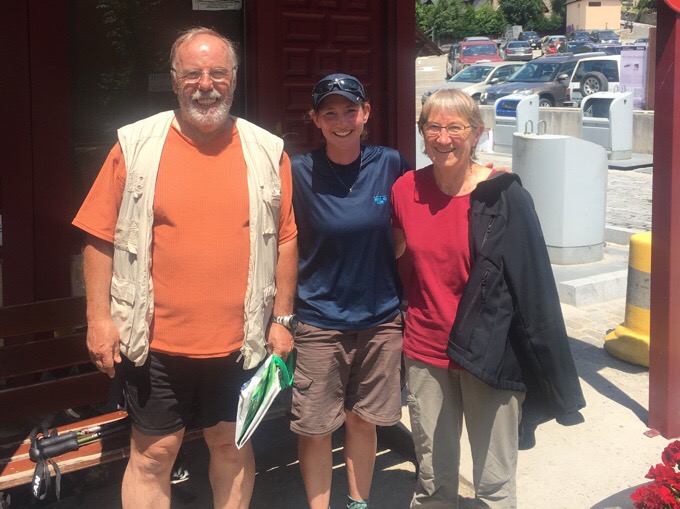 The excitement for the day came at the end. I was really energized after the break in Salardu, and the temperature was nice and cool for the long climb back up. The best part was that the climb was on an old gravel road that went gradually up and made for easy hiking with wide views of all the valleys I'd been through. 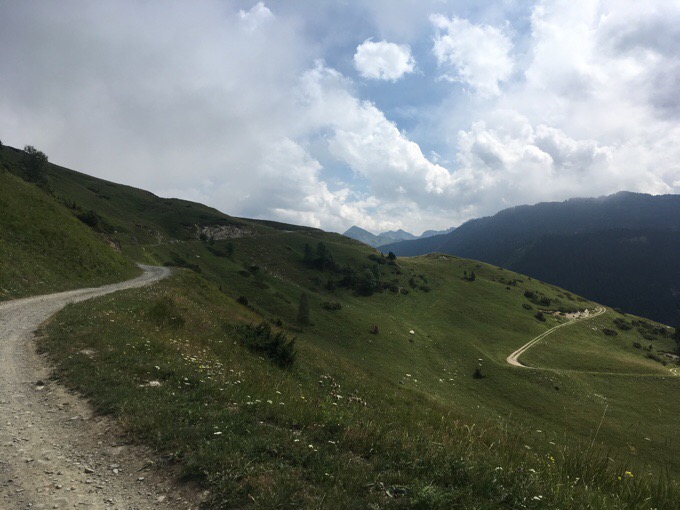 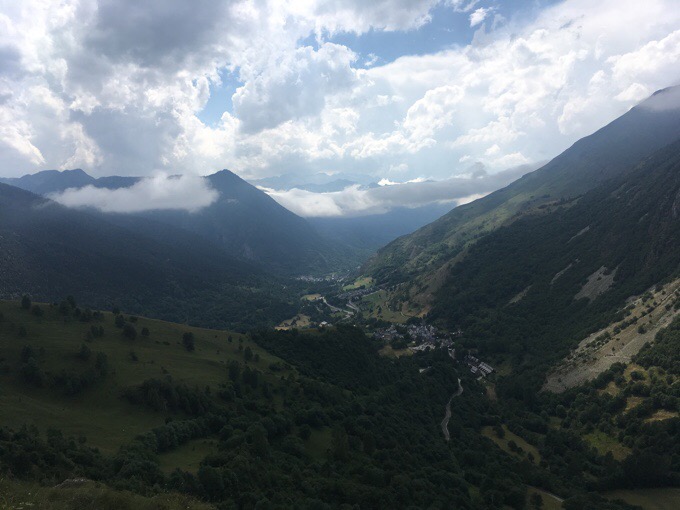 There was fog in some valleys, but not all, and eventually the fog overtook everything. I was hoping to hike high enough to get out of it, but it seemed that it wasn't going anywhere. I continued on roads with easy hiking and planned to stop once I was able to grab water. Unexpectedly, the areas I saw on the map were covered in cows and all the water was either small pools or stagnant streams. Both were probably equal amounts of water and cow piss, so I was not interested and just kept walking. 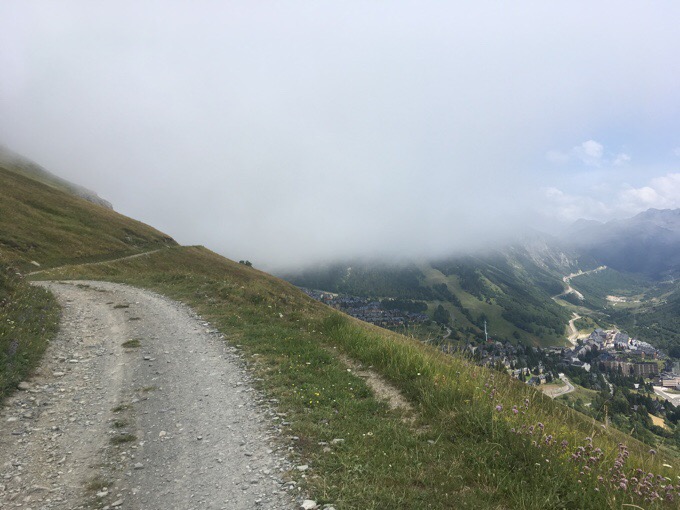 At one point, the fog was so thick that I couldn't see much more than 10yds ahead of me. I was thankful I had a good track to follow on my GPS app. I got to a closed ski resort and could barely see the chairs up on the lift. 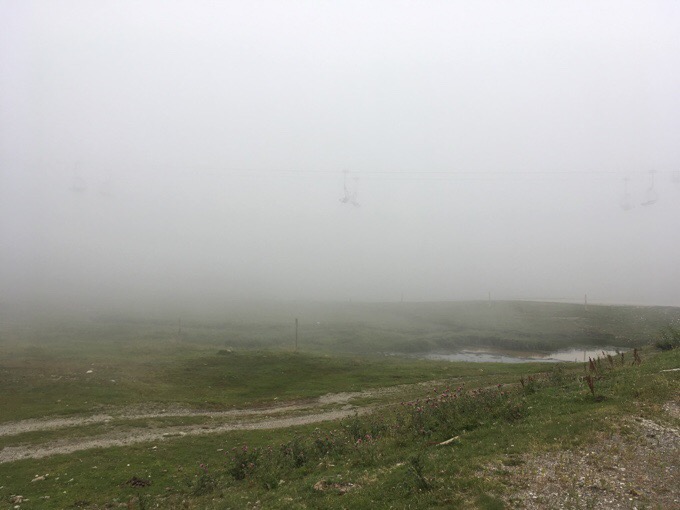 Even the ski resort was covered in cows. I noticed a small home of some sort next to the resort that had a sink outside. I was relieved to get water from that and planned to camp as soon as I found a good spot and got far enough from cows to be able to sleep without the huge cow bells ringing all night. 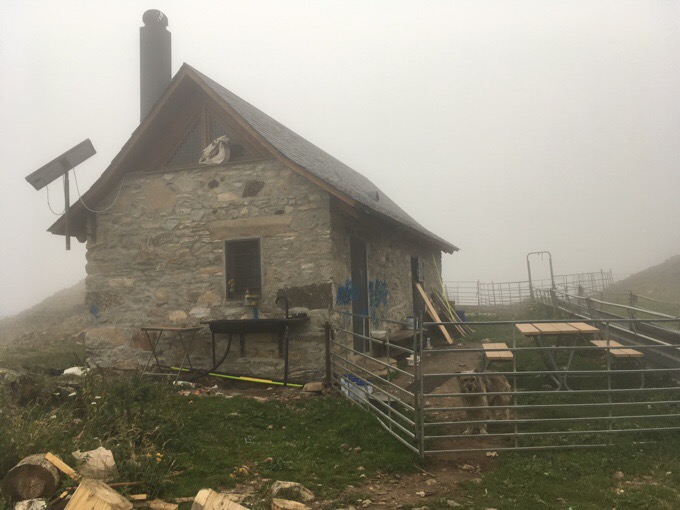 Just as I finished getting water, hard rain suddenly came down. That wasn't expected! Well, anything is possible out here, but that hadn't been forecasted last I knew. It started to dump, so I ran over to a sheltered spot I had just seen at the ski resort. It was like a faux gondola with open doors and gold seats apparently there to advertise wine it seemed. Well, it worked perfectly for escaping the storm! 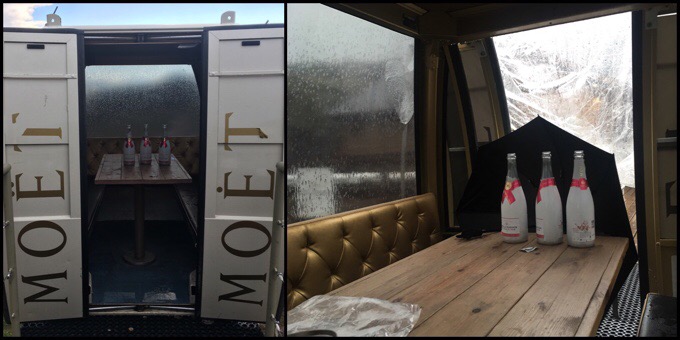 The wind picked up, thunder and lightning came, and hail even came down. I was so lucky to have ran in there. I covered the open door with my tent and groundsheet. There were a couple leaks in the roof. On one leak, I was able to tape a Ziplock up to catch the leaks. The other was an open vent that wouldn't close, so half of the gondola had some rain coming in. The other half was completely dry, so I sat there and blogged while the storm moved through. Here's a video.

I seriously contemplated just sleeping in there. It wasn't ideal, but would have been doable. As I sat in there, I saw two large groups that had been hiking running to the the parking lot. What a crummy way to end a hike. They too didn't seem to see this one coming. After about an hour, it passed and skies cleared in one direction while still dark in another. I was pretty chilled, so I decided not to stay in there and walked up the hill to warm up, find a spot hopefully sheltered in the trees, and away from cows. I did find a spot pretty quickly, and was most happy about that because I also still had strong enough service to get the blog loaded for the day. I don't know that I've had service in my tent this whole trip! It's really ideal for me when that happens, because I can't load blog photos into the WordPress app until I have service. That means sitting somewhere on trail or in town for 30mins during the day when I could be hiking. Doing it while in the tent is the best and saves me lots of time and effort.

I thought about tenting where there was a view, but chose to stick to the trees for protection if another storm comes through. I setup at 7pm. It turned out to be the right choice. I had a good 30mins of sunlight to dry out the tent and then the fog in the valley came rolling in like a wave. I did a quick time-lapse as it approached but had to stop it early to run over and close up the tent before it got too damp. It was like a huge wave slowly coming towards me. 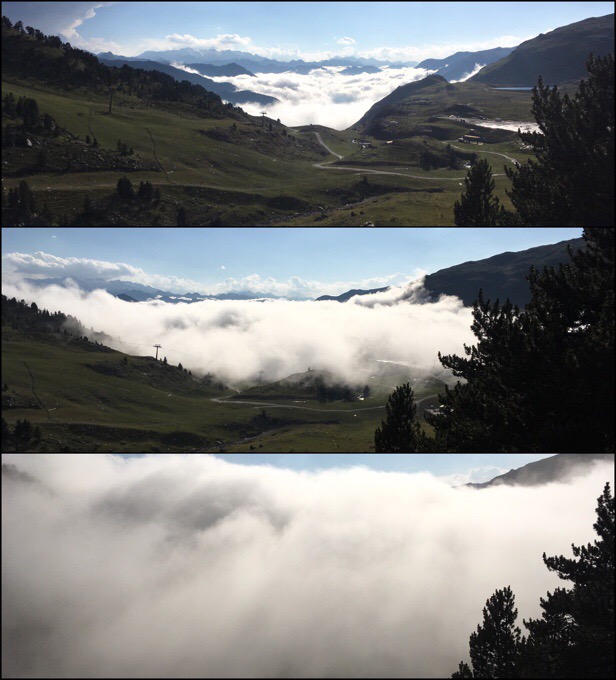 Nice damp chill in the air for the night, but great for sleeping! It doesn't seem like it's going to rain again, well I hope not! 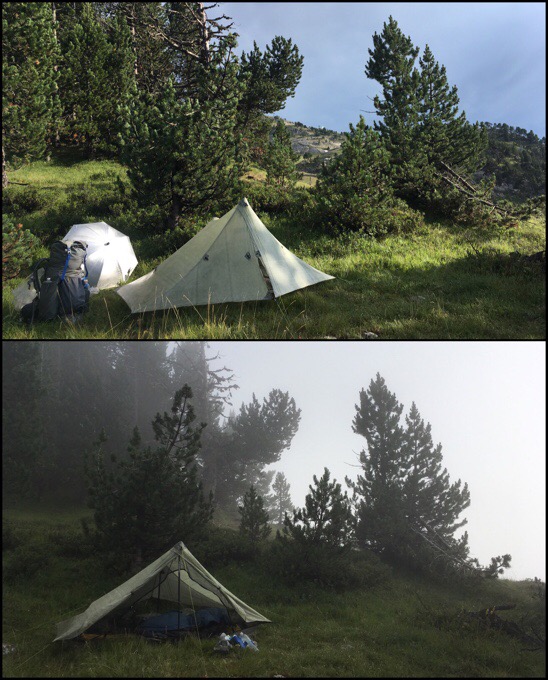