Day 23: A Rough and Rugged One

It didn’t rain overnight that I noticed, but it did rain briefly this morning at 6:30am enough that I’d need to dry it out later at lunch. I looked out and saw that it didn’t look like it was going to clear anytime soon. I had service and checked the weather, 50% chance of rain most of the day, darn. I’ve been fortunate so far to be able to avoid extended rain, so I accepted that is may be the day. I packed up and headed out at 7:40am and headed up to the fog. 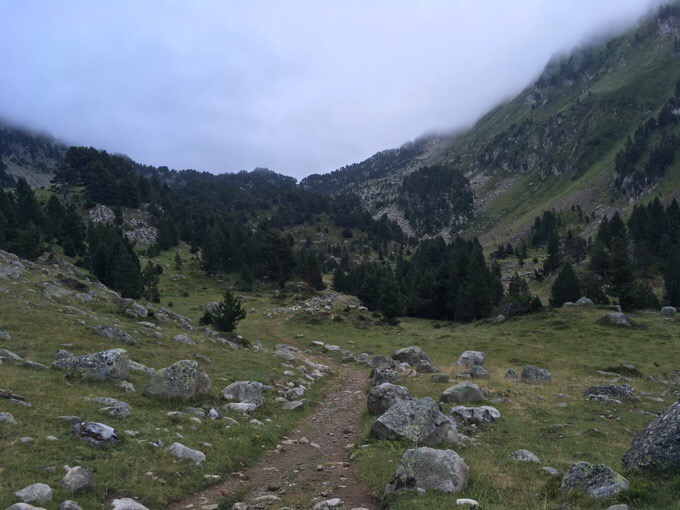 The first three hours of the day had varying levels of fog, mist, and rain. I used my umbrella when the wind wasn’t too strong, but once I climbed high enough to be above tree line, the wind was pretty strong. I was happy that there were dry periods and the fog would lift, so I was able to actually see the scenery. 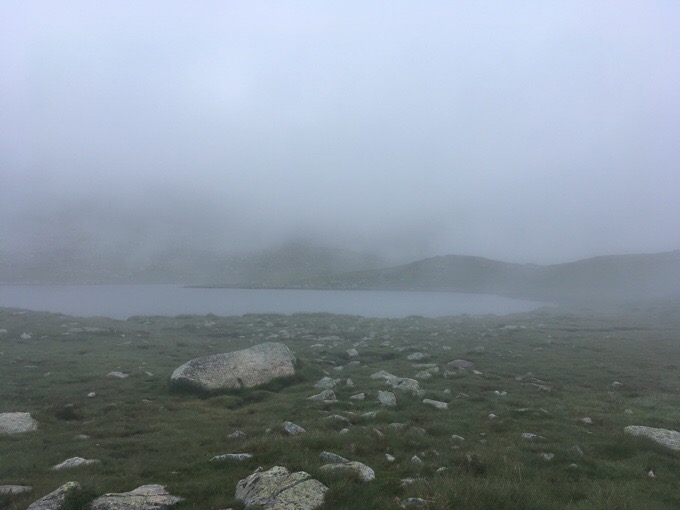 When I got to the big climb of the day up to Tuc de Marimanya, that’s where things started to go awry. In good weather, I think this would have gone a lot smoother, but in cold rain and wind, I was not making the best decisions with navigation and I made the climb take much longer than it should have. This coming week is the most remote section of the HRP, and navigationally the most challenging with many stretches without trail, way markings, or cairns. It was in the upper 40sF/8C, and with the rain and wind, it felt much colder. I was impatient, wanted to keep moving to stay warm, and didn’t want to keep stopping to check the GPS. 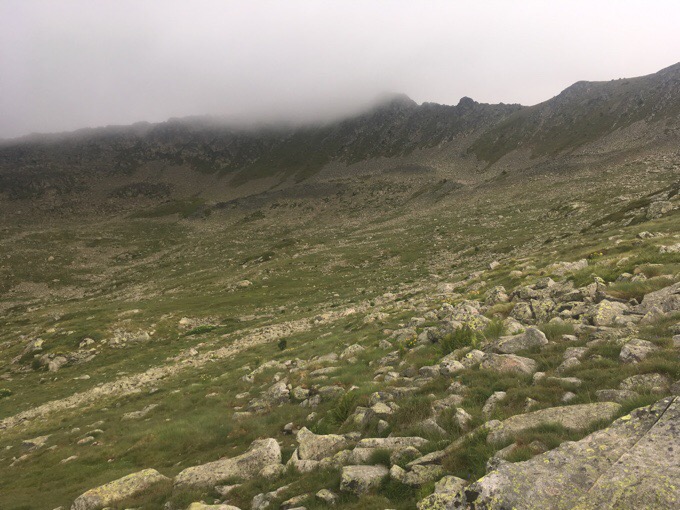 This climb was deceivingly draining.

Just before the final part of the climb, I stopped to put on my rain pants more for warmth than dryness. It was cold up there. Right when I finished changing, I looked up to see it was clearing, whew! I knew I had limited time and tried to book it up, but given the wind and cold, my body wasn’t moving very quick. Plus, I hadn’t eaten much this morning as I had just been too uncomfortable to think about it. My body wasn’t going as fast as I wished. I ended up giving myself a ton more work. 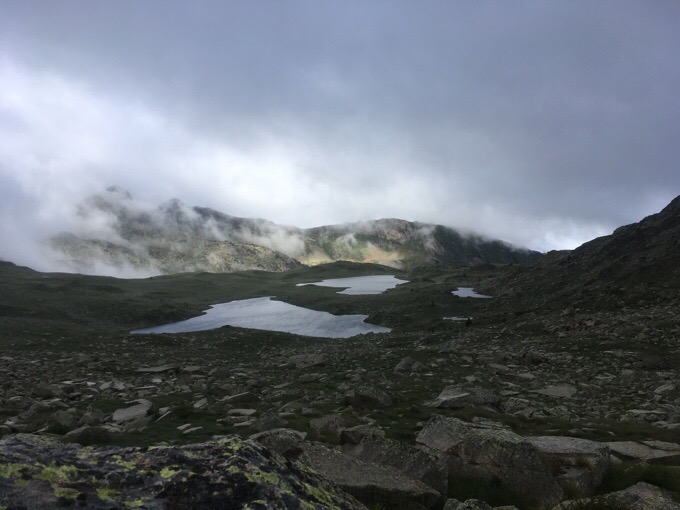 Today just wasn’t my day. I made a lot of decisions that were more time consuming and was also moving much slower than usual. A lot of the morning was on rocks with slippery fungi or steep angles in grass. With the strong wind as I got higher, I was going super slow to be careful not to slip. 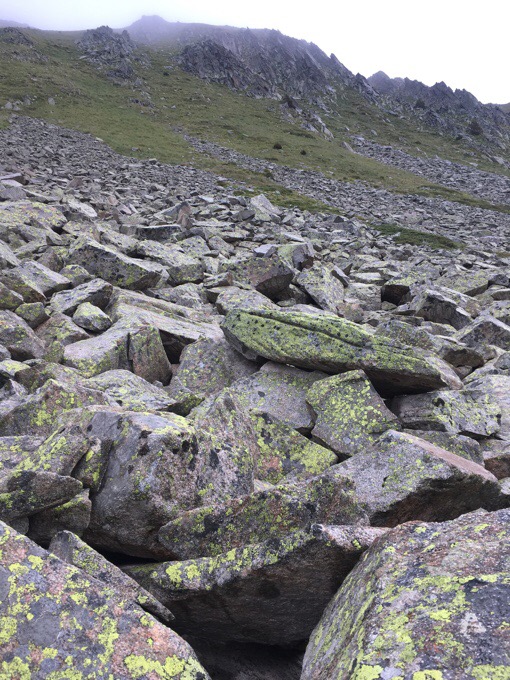 Once up on the ridge, the view was awesome! I finally got a photo of izards. Paul had told me they would be in this area and he was right. A whole herd bolted off the ridge when I hit the top. My frozen hands weren’t nimble enough to get that action, but fortunately a few lingered and I was able to get photos and videos. Man, they are fast! They remind me of a cross between a deer and mountain goat but much faster. My understanding is that they are unique to the Pyrenees. They are so fast! 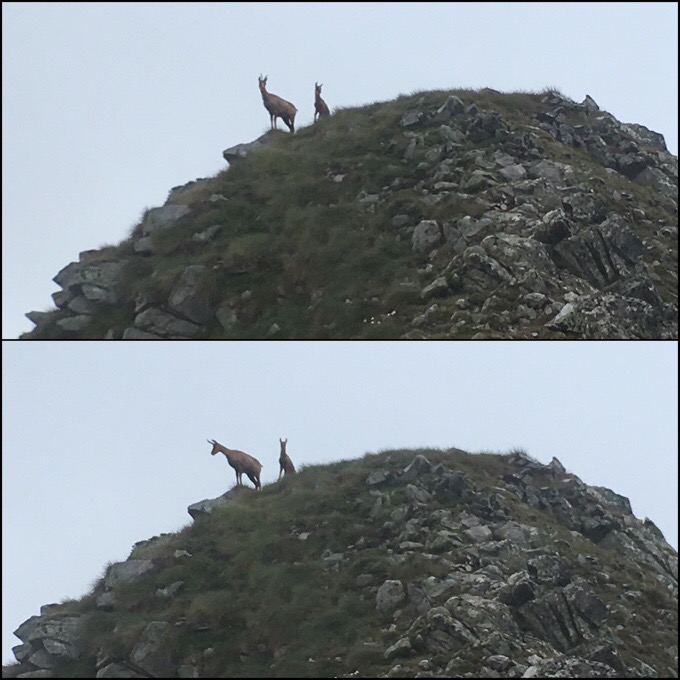 Once on the ridge, I was happy that the fog would clear enough for me to see the great view, but rain also kept coming in spurts and the wind was so strong that I couldn’t comfortably enjoy it. I just wanted to finish the ridge walk as soon as I could to get over and hopefully out of the wind so I could warm up and eat. Here’s the view on each side of the ridge. 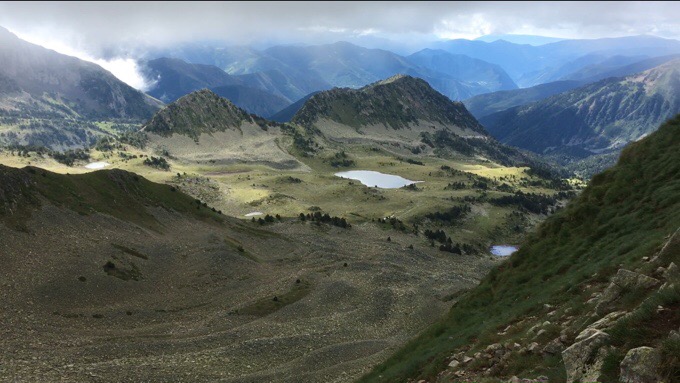 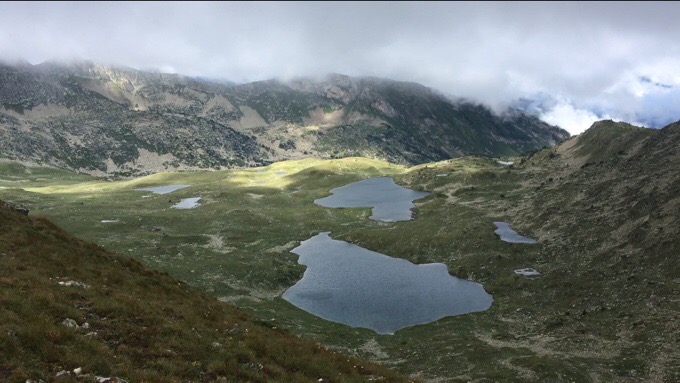 I was worn out battling the cold rain and wind, so I was moving super slow to be careful. It was an odd mind game for me as my instinct was to hurry up and push through it to get off the ridge, but my mind was constantly repeating, “go slow, don’t be careless.” The rocks were super slick on one section, and I swear it was like I was literally crawling. It was frustrating and draining. Also, with all of this, I’m carrying 7 days of food because this is the longest stretch between resupplies on the route. 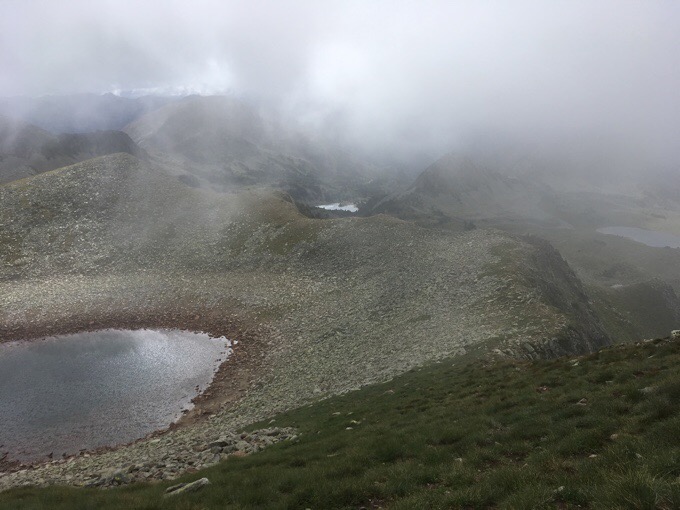 Down on this ridge with lots of slippery rocks.

Once I got off the ridge, the next section was just as slow for me. Downhill on more rocks and grass, but I was so tired that I was moving super slow. Once I got low enough and the sun broke out, I stopped for an early lunch over Estany d’Airoto. It wasn’t the most relaxing lunch because the cold wind was still blowing and I also took this time to dry out my tent and hiking pants. 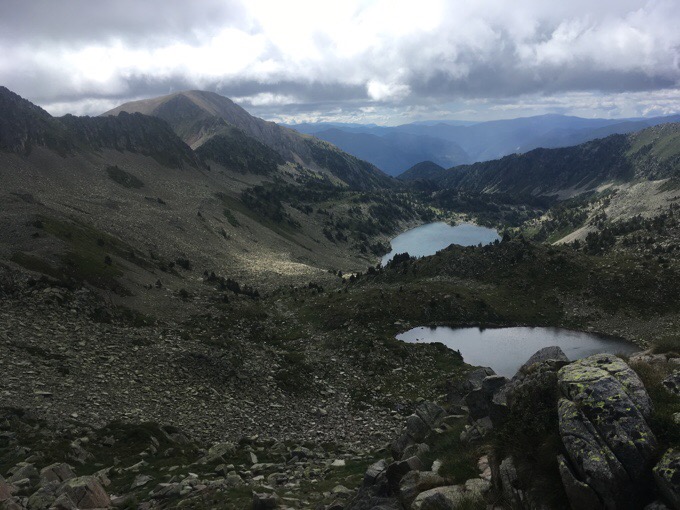 Down more rocks to the second lake for lunch. 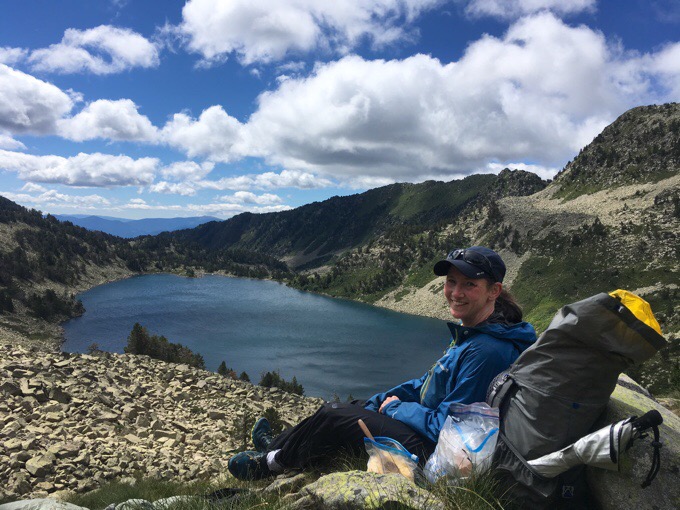 I had stopped for lunch just before a long scramble over more boulders. Thankfully, they had dried in the sun, but the climb was very tiring and slow. Eventually, I made it up to Coll d’Airoto. I had totally not made the book time, which I usually move faster than. I’d taken at least an hour longer than the book to do both those climbs this morning. 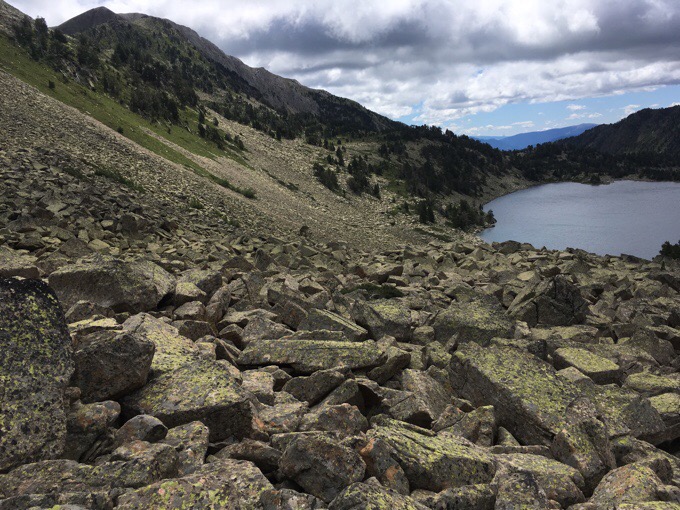 I was relieved that the descent off the col was fairly relaxed with a well worn path going down the valley. 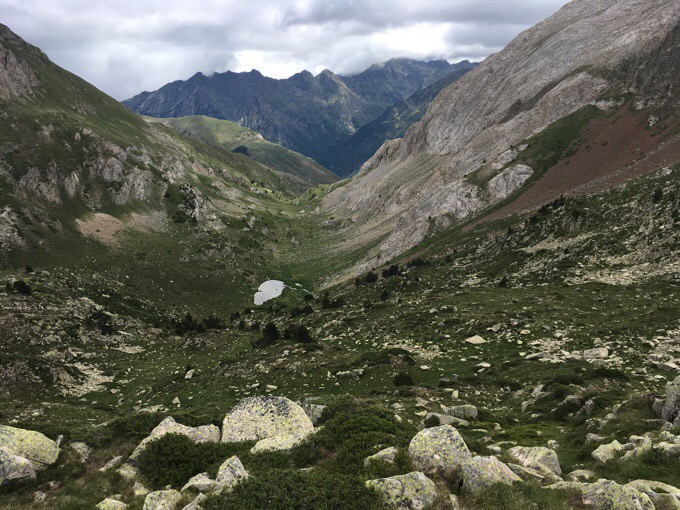 Eventually, it hit a dirt road that had many switchbacks with trail to be able to cut them. It was a good break to get a bit of mindless walking in. My body was drained though. Like that feeling of having been out sledding in the cold. I get pretty worn out with cold wet weather.

The last major task of the day was for me to drop down to the tiny village of Alos de Isil. There’s a new path that’s yellow blazed that worked nicely, but halfway down, I recommend leaving it and staying high rather than taking the switchbacks all the way down to the stream in the canyon. Of course I took it down there and realized it wasn’t taking me where I wanted to go. Back up I went, ugh! Eventually, I got in the village, but I kept making the mistake of cutting down too early. Maybe the yellow blazes would have led me on a longer, but more time efficient path, I don’t know. Anyway, I made it at 4pm. It was such a small and old village that it felt surreal to be in it winding through the narrow streets and walkways. 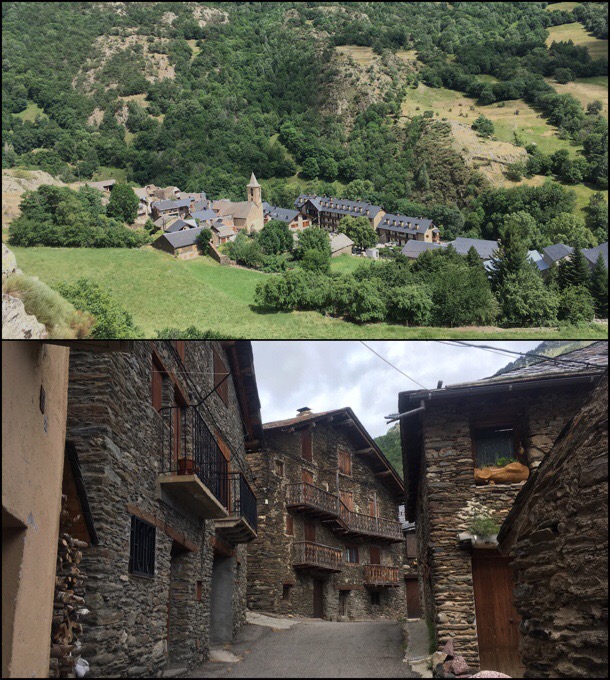 I had decided I was tired enough that I might actually stay at the refuge in the village mentioned in the guidebook. Problem was that it was a ghost town. Only people about were quite old and knew nothing of a refuge when I asked. Even construction workers shrugged. I looked around a bit and got annoyed and considered it a sign to keep walking. It was an easy road walk out of town, so I told myself I at least could do that. 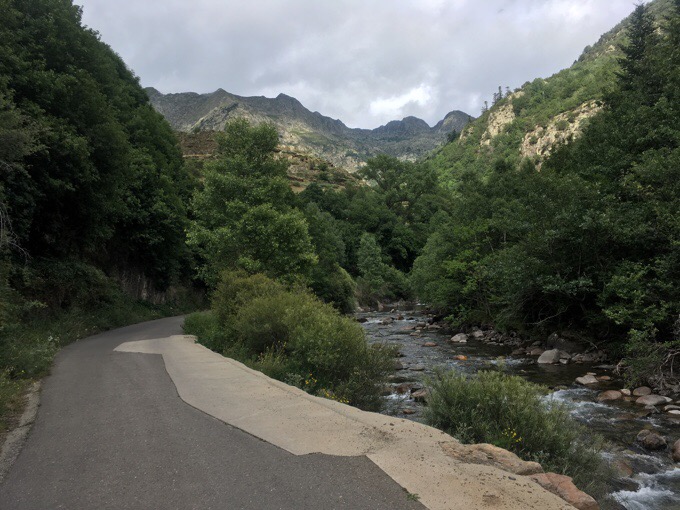 The road was along a river and got to a point where the route comes off the road, crosses a bridge, and climbs steeply. I was not in the mood to climb. 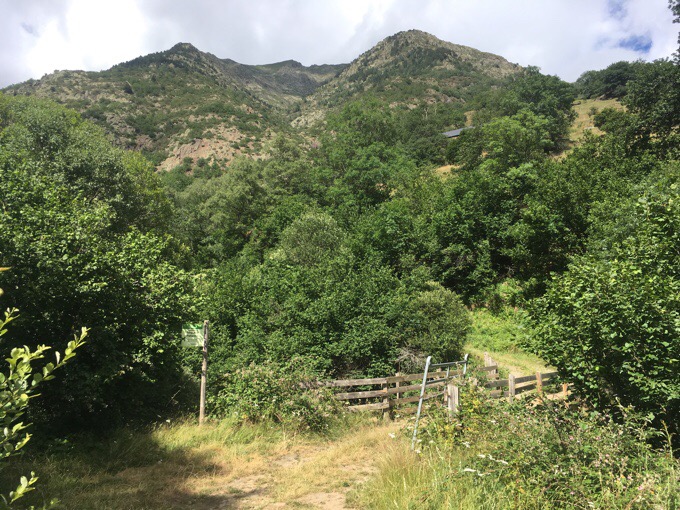 Nope, not going up that today.

I explored along the river that ran under the bridge and found good secluded spots. Not the most scenic, but I’m totally relaxed down out of the wind, protected in trees, and the sound of the stream to lull me to sleep. I came up two hours short of my guesstimated endpoint today, so it really wasn’t my day. Hopefully, tomorrow I can hit the reset button and have a more efficient day. 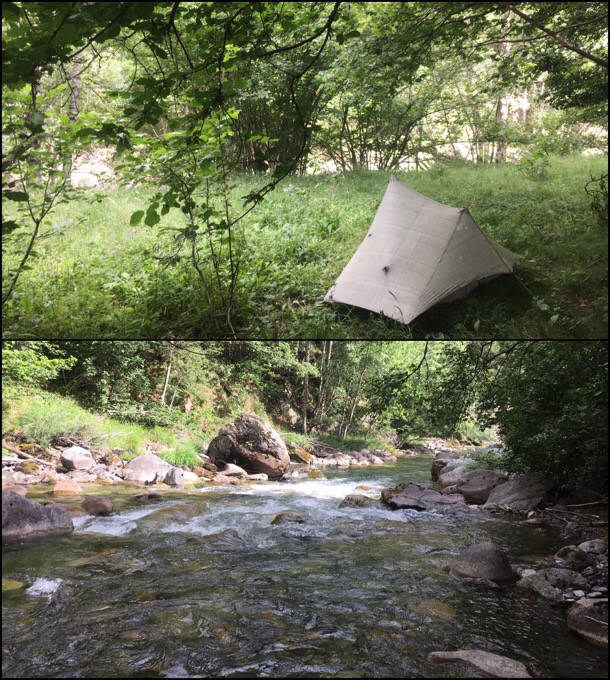