July 26th
Near Noarre-Refugi de Baborte/Cinquantenari
Campsite Elevation: 7820ft/2384m
*No mileage available. The guidebook lists distances on the route by time rather than miles.

Today felt like three separate days to me with such differences in each part of the day. I had a somewhat ambitious goal for how far I wanted to make it, but I knew that if I put in a full day, it should be doable. My goal is to time it so I land at El Serrat in three days and be there for when check-in opens for the hotel I booked so I can have a luxurious 24hrs there. It’s a fun motivator. I know, silly I’m out here to be in wilderness and my motivator is the hotel. Think of it more as me wanting to get my full time in that I’m paying for. I want to take full advantage of this one. By the time I get there, it will have been 7 big days of hiking in pretty tough terrain. I’m due for some major R&R.

I set off at 8am up the steady climb of the valley of Riu de Noarre, the river I slept next to last night. It was a chilly morning, so the wooded climb was a good warm up. Then the climb just kept going and going. 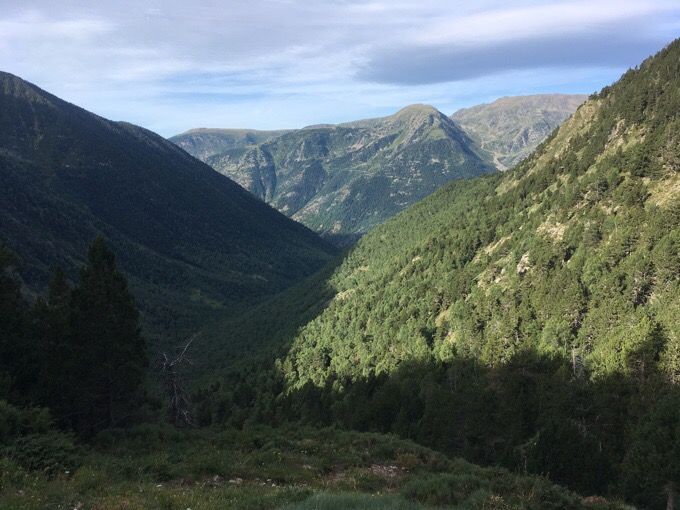 It would hit a plateau and turn to reveal yet another climb. This happened three or four times and ended up being a 3300ft/1000m climb that took me 2.5hrs. 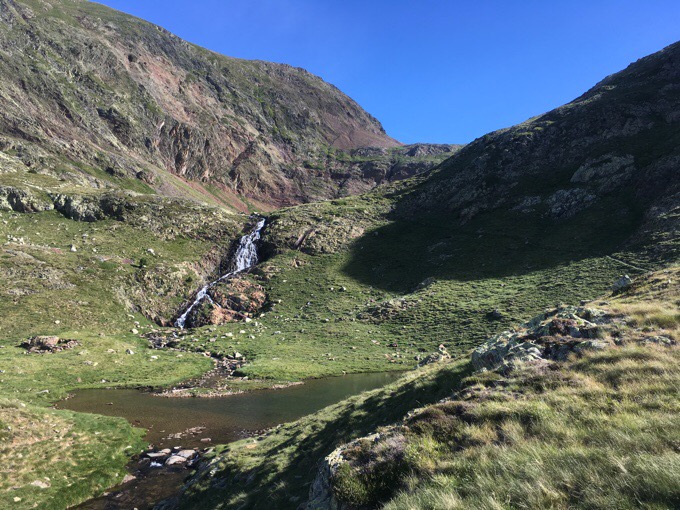 Along the way, I came across a solo woman coming down the pass. This is actually the first solo woman I’ve met doing this more remote stuff. Her name is Sara and she is from Switzerland. She too is a teacher and the same age as me (38). She’s a total badass in that she is a true wanderer in her summers off. She is out here with no electronics at all and just a map, not even needing a compass. She just goes where her gut takes her and has no plan at all. She just looks at where she is and looks at the map and decides what looks fun to do depending on her mood and the weather. When she runs out of food, she just hikes to town or gets a hitch and heads back out. Pretty awesome way to do it, but I couldn’t imagine no electronics! Like none. No phone, camera, MP3 player, or GPS. Wow. 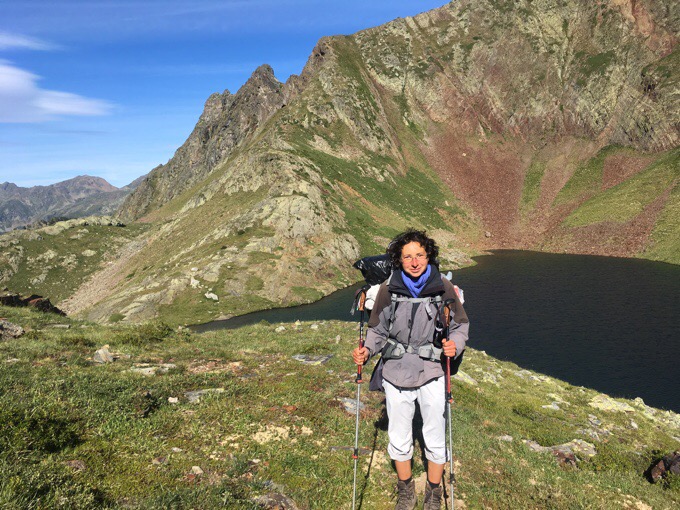 By the time I got to the top of Col de Certascan, my only focus was on how hungry I was. The last couple of days, hiker hunger has set in big time and that’s not great timing because I don’t have another resupply for like 5 days. 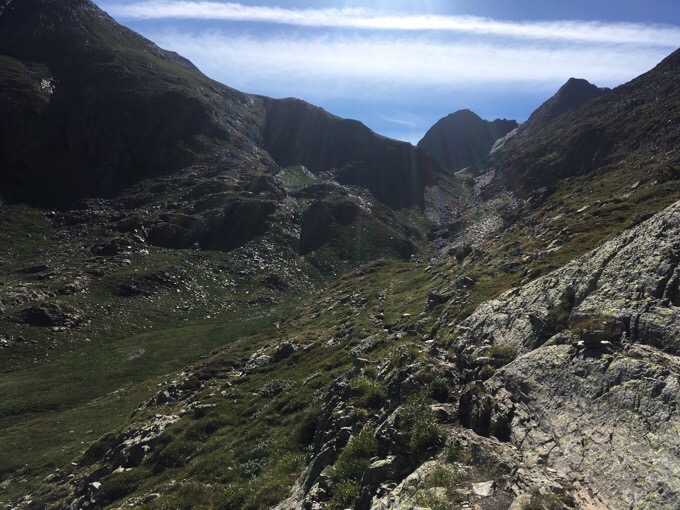 Final turn to the top.

That’s one reason why I booked the hotel with all three meals included. I plan to fill the tank. I do have a couple of staffed refuges where I’ll be able to order and buy some food, which I’ve yet to do out here. I’ve yet to do it because I haven’t felt the want for it. Plus, I saw a brownie once at one that looked like something I’d have a tough time passing up if I tried one. It’s a slippery slope to have food at a refuge and then not want it every time you pass one I’d think. Well, on the way down the col, I decided it was time to cave in and get something at the refuge I was approaching because I had not packed enough food. 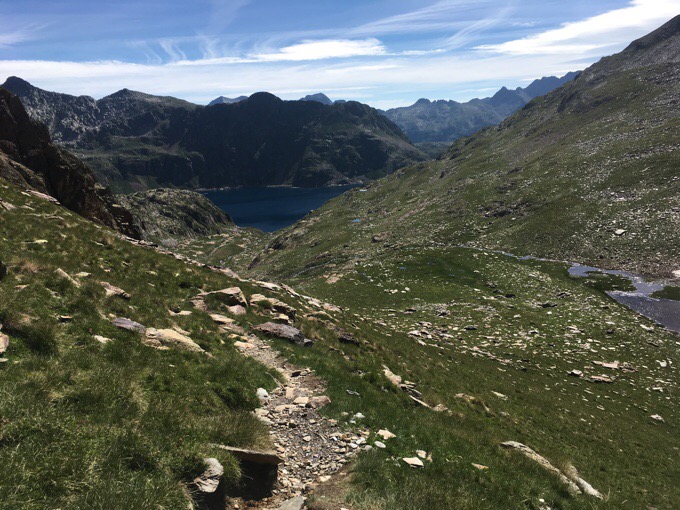 Heading down to Refugi de Certascan. 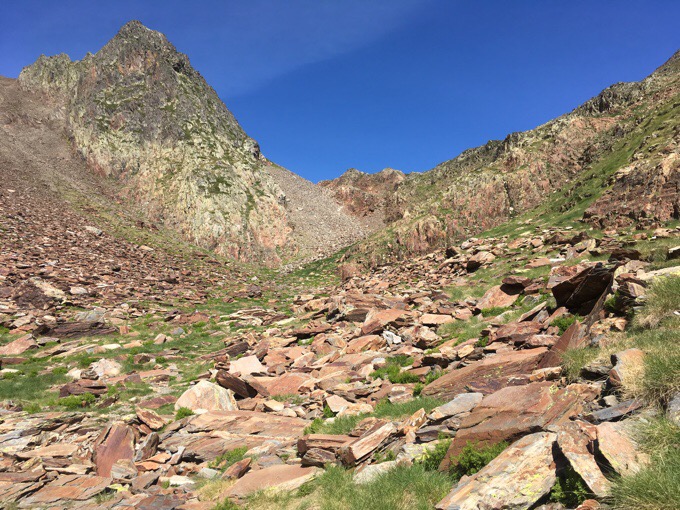 Just as I was approaching the Refugi de Certascan, I saw another solo woman, yay! We seemed to both be on missions, so we didn’t chat, but it was great to see. When I got to the refuge at 11:30am, they had a few day hikers and a resident donkey, but it was pretty quiet. I got an omelette, ham sandwich, and Kit Kat for lunch and then a bag of peanuts to add to my food supply. The omelette came with bread, which was a nice bonus. I saved half the sandwich for later. It wasn’t the best with plain eggs and stale bread and the sandwich bread was quite hard around the edges, but it was food! I later heard from another hiker that it was not one of the better ones with the food. I was just happy to leave full and headed off after about an hour there. 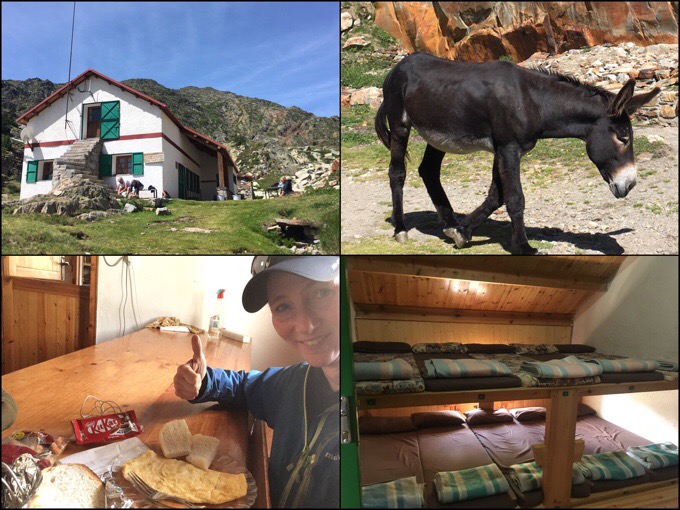 Not long after leaving, I noticed the two tracks I have did not follow the next three hours in the guidebook and seemed to either take a shortcut or accidentally go the wrong way. I plugged in the guidebook’s waypoints and headed for the route described in the book. 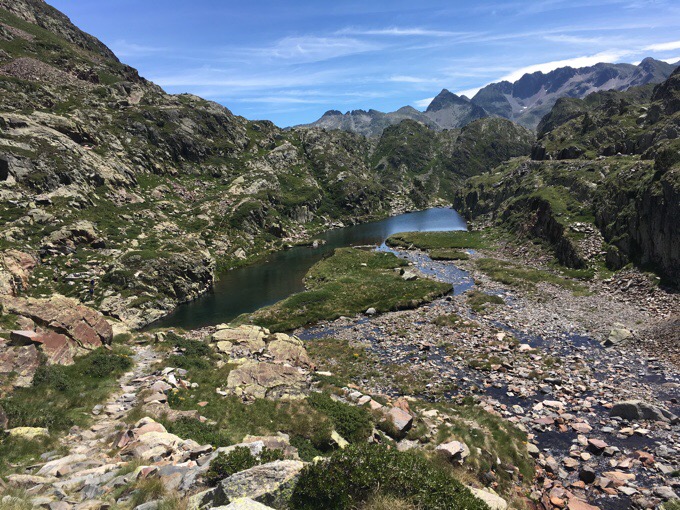 A nice stream and lake leaving the refuge. 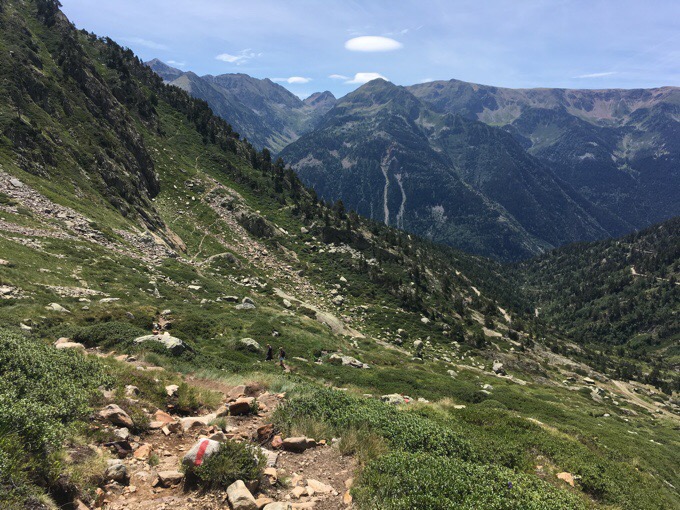 Switchbacks faintly going up on the left are where I’m headed.

A couple on vacation was heading the same way as me. They were doing a day hike that they were dropped off for and would be picked up partway along my route. I figure it must be a good one if vacationers are brought to it. Well, that was partially true. The first half of it was great with some switchbacks that led to two nice lakes and enjoyable hiking. 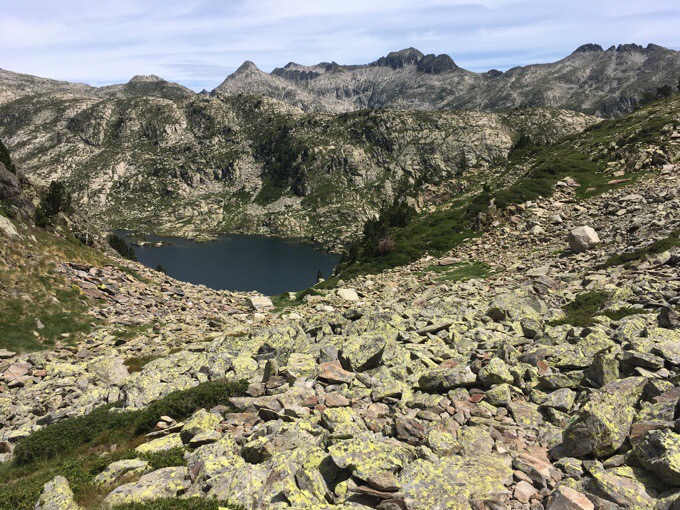 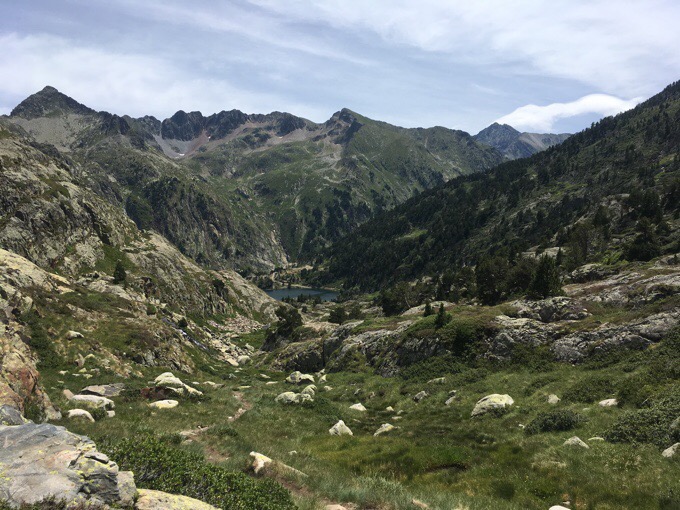 It was the second half where things derailed. Once away from the lakes, there was a long descent down the valley of Riu de Romedo. It started off ok, but as it went down further, the path got more faint and rugged with frustrating side hill walking on uneven terrain and tall grass reminiscent of many paths in New Zealand. 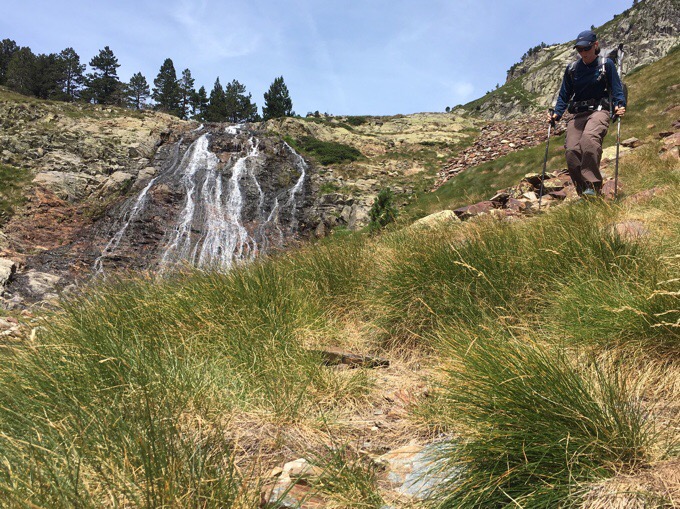 Nice cascades on the way down. 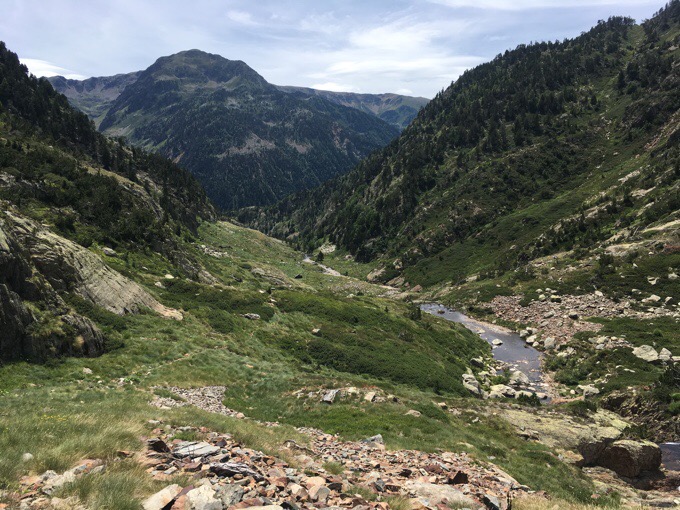 I was oddly quite worked up about this and let it get to me more than I should have. I think it was knowing there may have been a better option that was frustrating. I tend to keep a bit faster pace than the estimated book times, but on this one, I took the full three hours to get through the whole thing. That last half of it was the most rugged and remote I felt I’d been. I told myself to be super careful because my thought was if I got hurt, no one else was walking by. Very few had treaded this path. 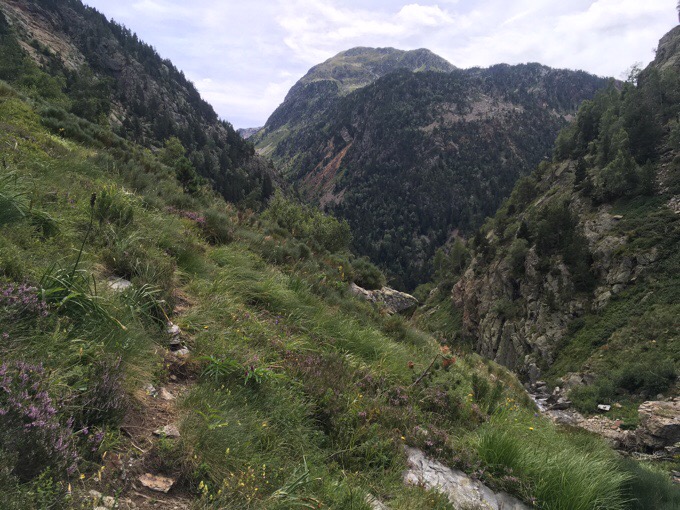 The path got much fainter and unstable on a steep hillside. Not my favorite, especially on that right ankle.

Finally, I landed at a bridge where the gpx track I have met back up with me. What put me over the edge was that I could see the path the track I had took and it looked like the most pristine and groomed trail I’ve see out here! A guy hiked up from the other direction and he had a better map. Yep, the other option was a nice groomed trail. Mine was so rugged you wouldn’t even know it was at that trail intersection unless you climbed up some rocks and looked for it. Why did I just go through all that to see two more alpine lakes when I’ve been seeing them all day everyday?! This is the only section I’ve felt frustrated and have enjoyed the route choices quite a lot other than that. I can’t say I recommend that option to future hikers. Although, when put in perspective, it was just 1.5hrs of discomfort. I think it was the knowing that a simpler option existed that made it feel like an eternity. I ended up flying up the next section of trail that was just beautiful and reminded me of Oregon just to get my frustration out. 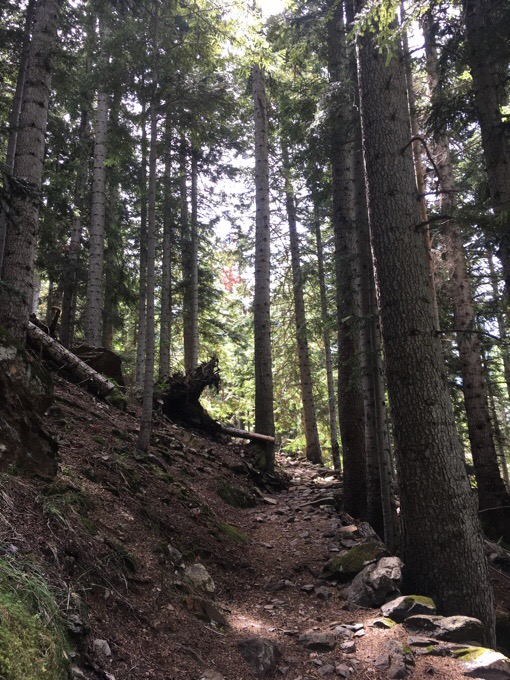 I had another 3300ft/1000m climb up to Col de Sellente that the guidebook said would take three hours. I had the fuel of frustration and had plenty of energy to knock that out in 2.5hrs, which was pretty good considering what all my legs had already done today. 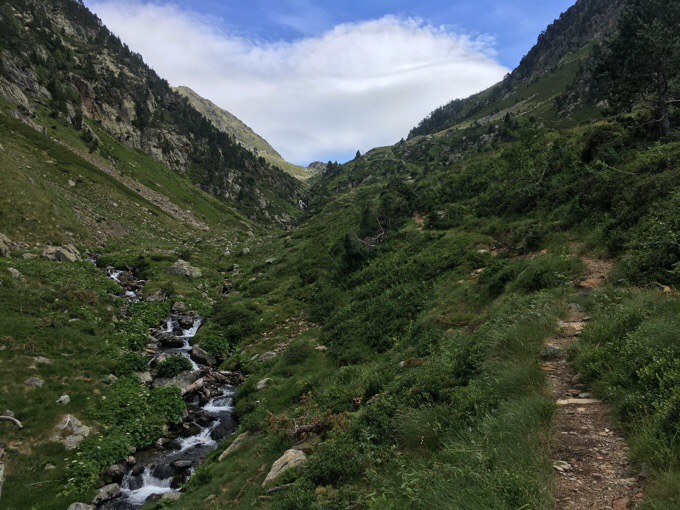 Heading up to Col de Sellente. 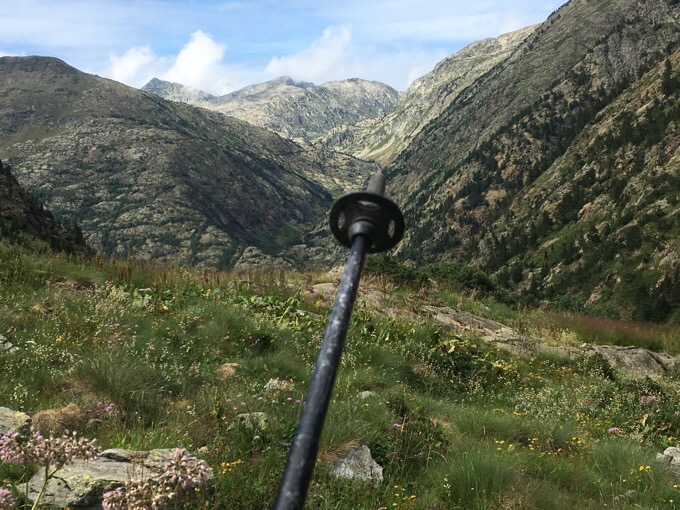 Looking back, I could see exact cascade I had taken the selfie at earlier in the other valley.

More nice views continued to appear as I reached each level of the climb. The winds were strong today, so the clouds looked quite unique. 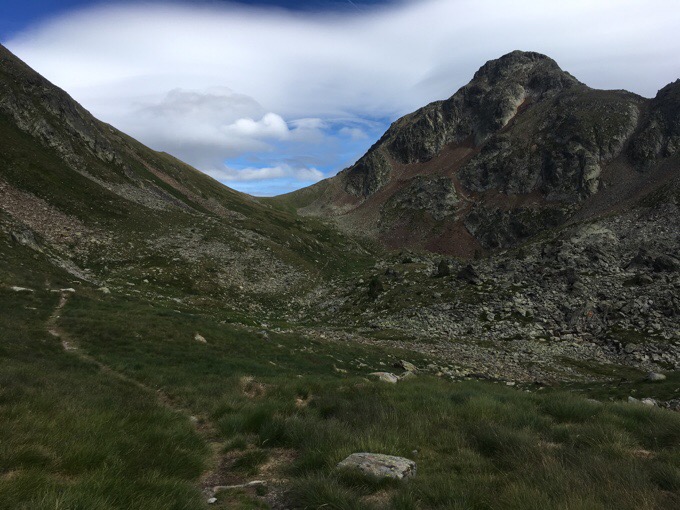 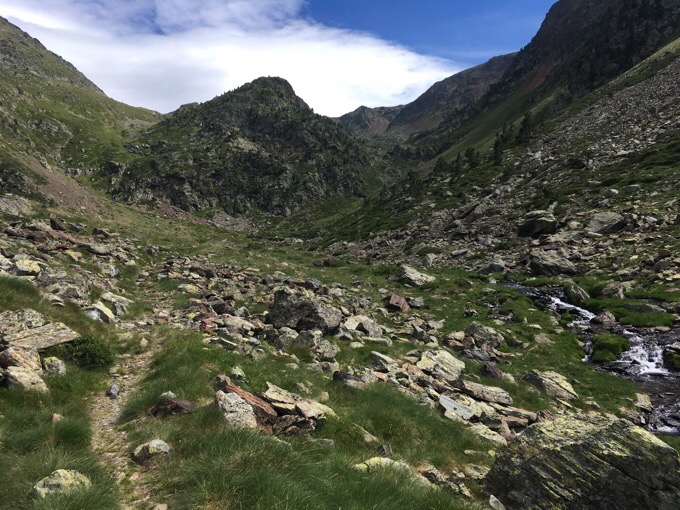 When I got over the col, I would have the option of staying in a small refuge that was like a hut and held 9 people. It as been chilly and windy all day, and I was tired, so I considered it as I climbed. 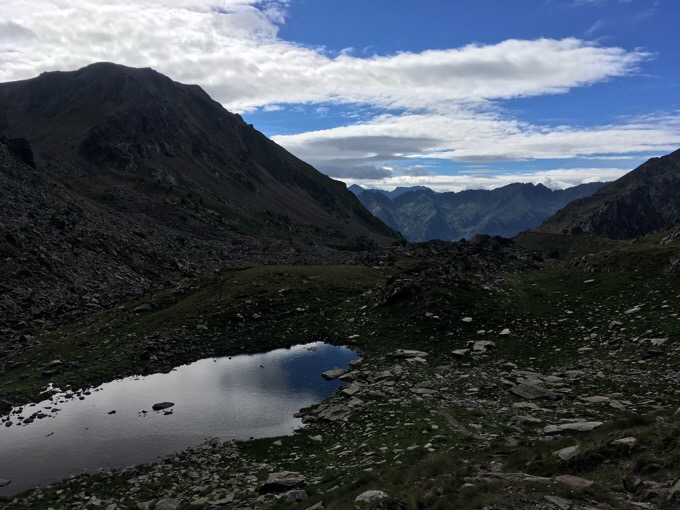 Looking back near the top of the climb.

When I arrived at 6:30pm, just two solo HRPers were there, so I decided to give it a try and picked a bed and had dinner with Klaas from Belgium who just started his second half section hike going the same way as me, and Franc from France going the opposite direction. It was good to talk to Klaas who also did the rugged route I did today and agreed that it was frustrating to know that there was a pristine trail option. 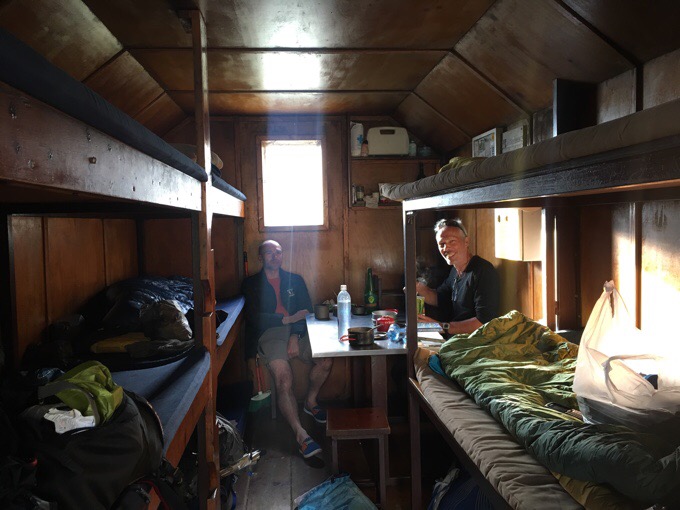 Then another guy showed up that was a mountaineer. I thought about setting up my tent and was not motivated to come out of the warm and wind protected shelter. The view from the refuge of Baborte Lake was great. 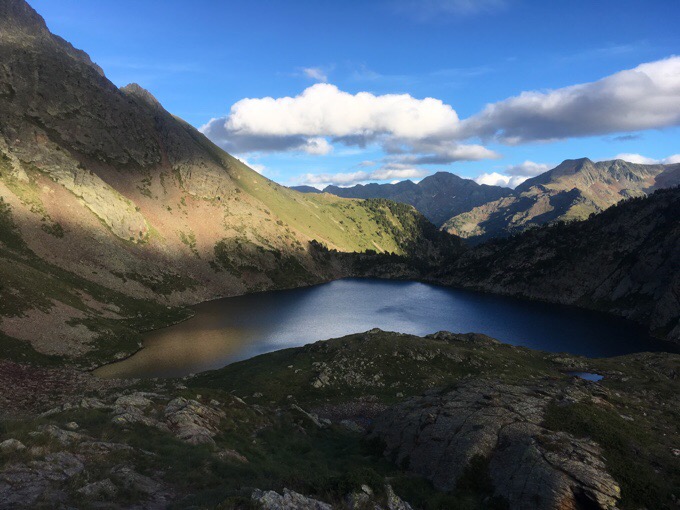 Baborte Lake as the sun goes down.

Then, just as I was about to settle in, a group of 6 young Spanish women arrived to squeeze in. They had been there last night and even secretly stored their food up in the ceiling of the refuge and we didn’t even realize the compartment was there. They also had a tent if need be. 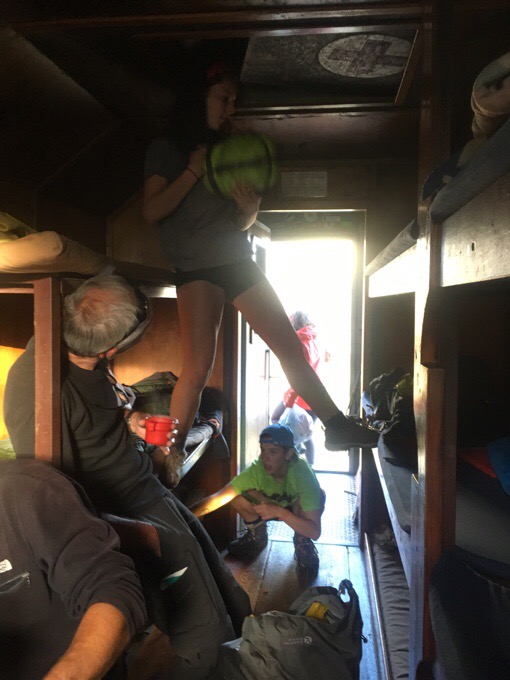 The refuge fills to capacity.

The refuge held 9 and there were 10 of us, but they could fit in one more. I chose to pitch the tent knowing I’d sleep a ton better on my own in the fresh air. It’s so wonderful in here in my tent on my own. Hey, I gave it an honest effort with the refuge. I have to say it was great to see these young women in their early 20s just kicking ass out here. They had been out for 12hrs having summited a peak and came in literally bounding down the hillside with such positive energy after such a long day. They were all camp counselors and worked really well together and were out celebrating the end of their camp. A fun day of seeing women out here. 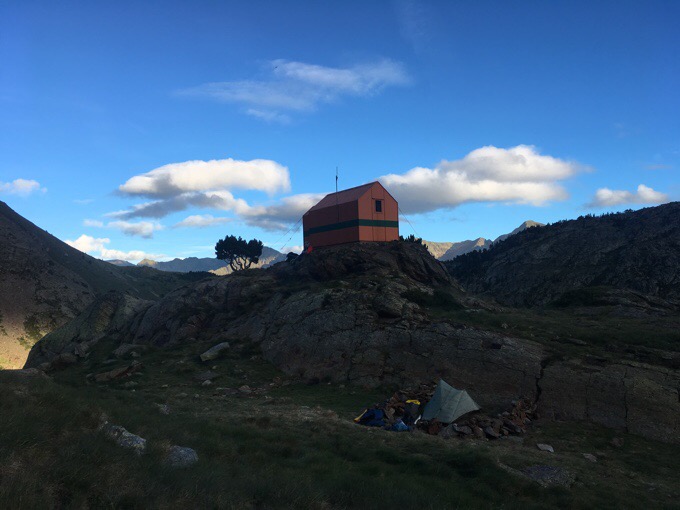 Pitched in a protected spot below the refuge.

The rumor is that maybe storms are coming in by 5pm tomorrow and then all day the next day. I want to be at my hotel by noon that second day, but if I get going earlier tomorrow, I could get more hours in good weather and just go to town early and sit in the lobby rather than hiking in poor weather. We’ll see if I naturally wake up early tomorrow. I’m not setting an alarm, but I hope that rumor is wrong! The winds and clouds today were worrisome of something bigger possibly coming. Whew, I told you this felt like three days in one! 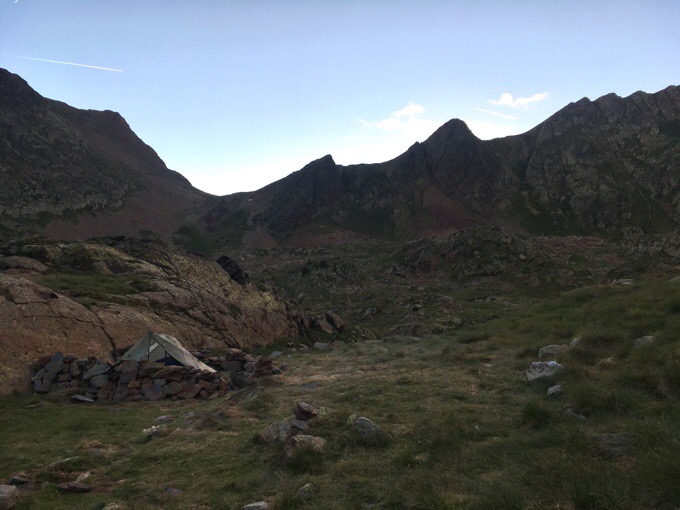 Clouds cleared as the sun went down. Behind my tent to the left is the col I came over.