Day 26: Out Of The Alpine, Into Andorra

I slept pretty great last night, but then I woke up at 5am to pee, and then I couldn't fall back asleep. All I could think about was the possibility of thunderstorms and that I should be walking while the weather was clear. I tried to relax and ended up leaving a 7:15am. The first couple hours of the day was a nice downhill into a wooded valley. I got enough reception to be able to check the weather. Totally clear for the next few days and no rain at all, yay! Maybe the rain is forecasted for the last section I was just in. I've definitely hit a dryer climate. ﻿When I got down and around the corner of the lake I camped at, and saw the view, it hit me, the alpine section of this route is over! It seemed so sudden. I looked out at the view ahead of me and the rugged mountains were gone. I saw tree filled mountains and hills. Even the air was different with more haze and heat. This last section can get pretty hot. 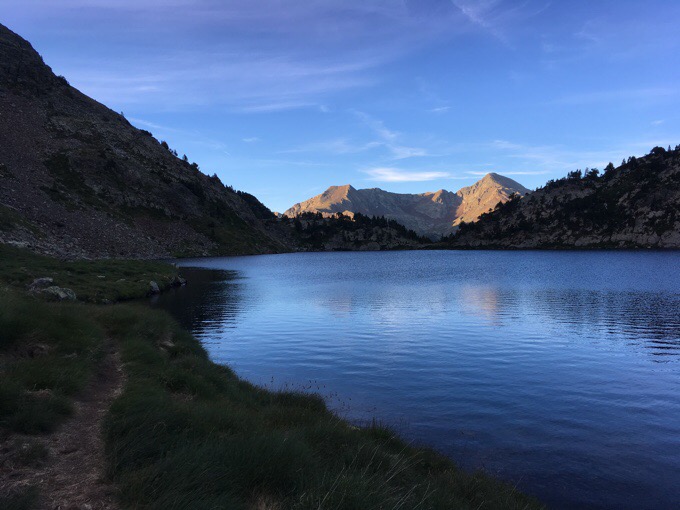 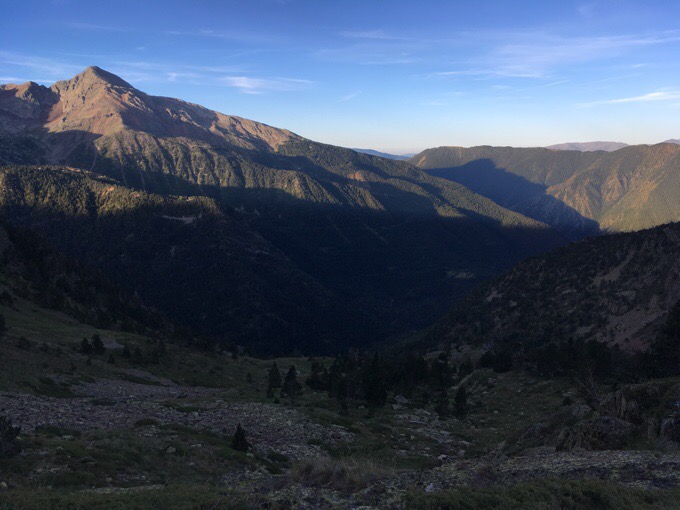 That was a mix of emotions. It means I've moved into the final two weeks (or less) of this hike, which is bittersweet. I wasn't expecting it to be gone quite that quickly. Not that the rest of this will be easy by any means, but scenically it will be much different and less of the grand alpine mountains I'd grown accustomed to. I thought I had a few more days before this happened and wasn't really ready for it. 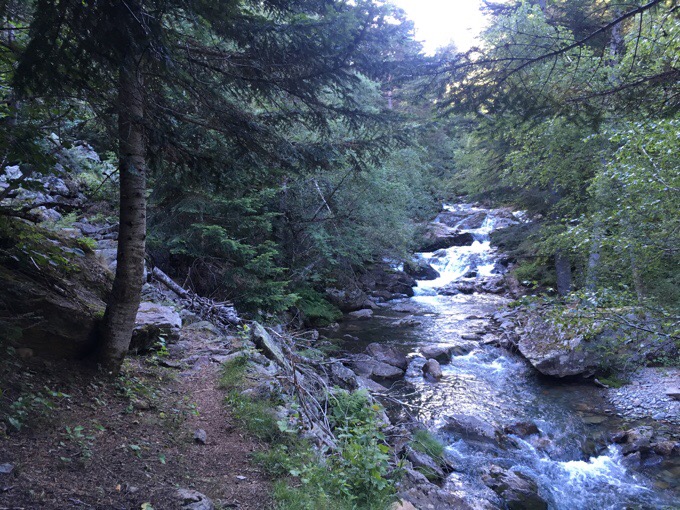 Once I got down to the valley, the route overlapped with GR11 (in Spain) again. I caught up to Klaas who had been in the refuge where I camped last night. Not long after we started hiking together, I noticed on the GPS that we needed to turn off the GR11 and head cross country over to the next valley we'd be going up. Whew, good thing we didn't mindlessly follow the GR11. 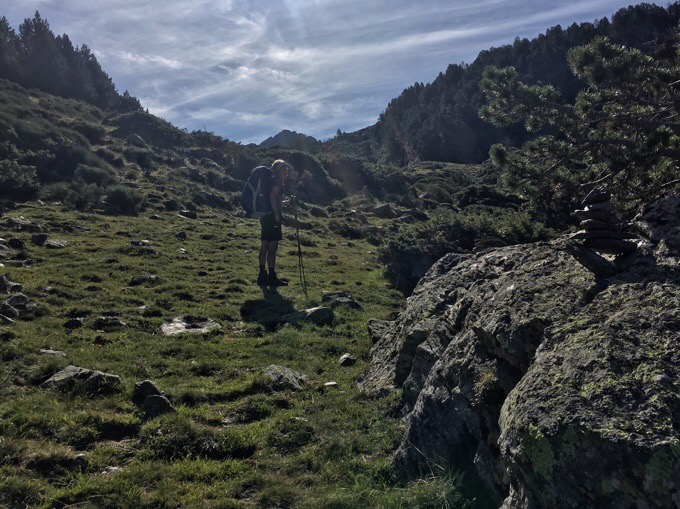 About 40mins later, we reached a point where we both checked our positioning. Something didn't make sense. We were in the wrong valley! We weren't even supposed to leave the GR11! The track I had from three different people, they all took this alternate route for some reason. I felt horrible for leading Klaas astray! He handled it so well! We looked across and could even see the GR11 in the other valley. Ugh! 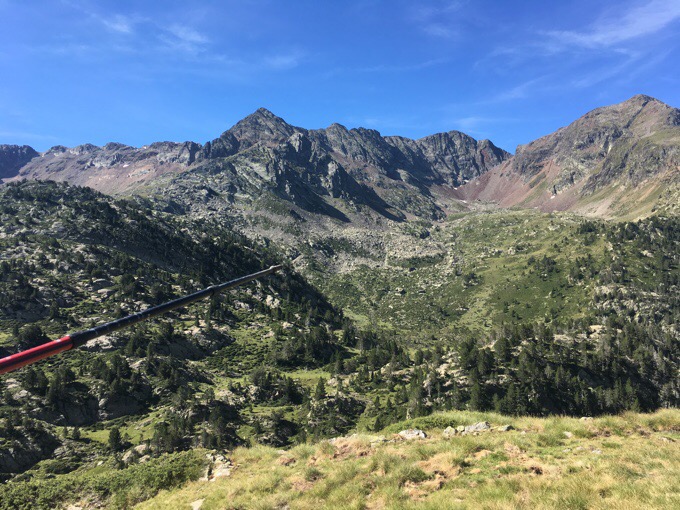 Fortunately, we only needed to cut down, across, and back up something remarkably simple. It was even cairned as if others have done this before. 20mins later, we were back on the GR11. Man, I felt terrible about that. It's one thing to do that to myself, but to do that to Klaas, oh man. 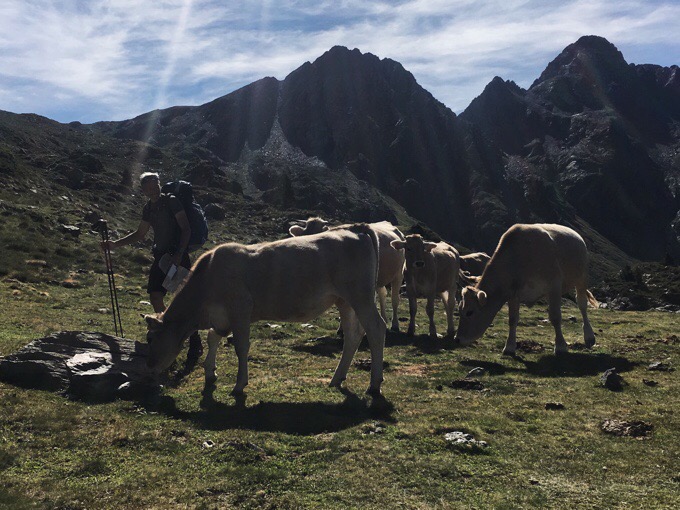 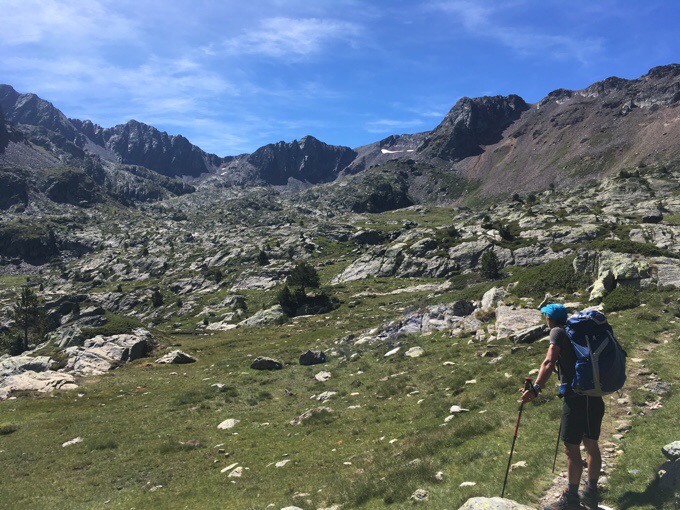 We made it up to a lake, Estany de Baiau, just before our final steep climb, and had lunch. While there, we chatted with a GR11 section hiker named Avi. He was from Israel and today was the last day of his section hike. He carried on while we had lunch. Klaas took a dip in the lake (it was pretty warm today), and then later, as we were leaving some cows walked across the shallow part of the lake to check us out. The lead cow stopped and peed out liters of urine right into the lake…that people swim in…classic. They had a baby cow with them that was really cute. Again, they got a little too close and curious, so I was happy to pack up and go. 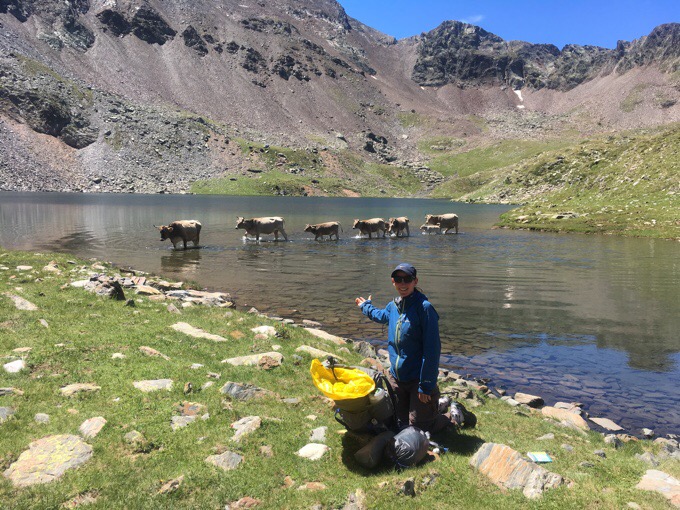 The climb up was said to be a tough one with scree. I imagined it being much tougher, so I was relieved when it wasn't as bad as I'd built it up to be in my head. 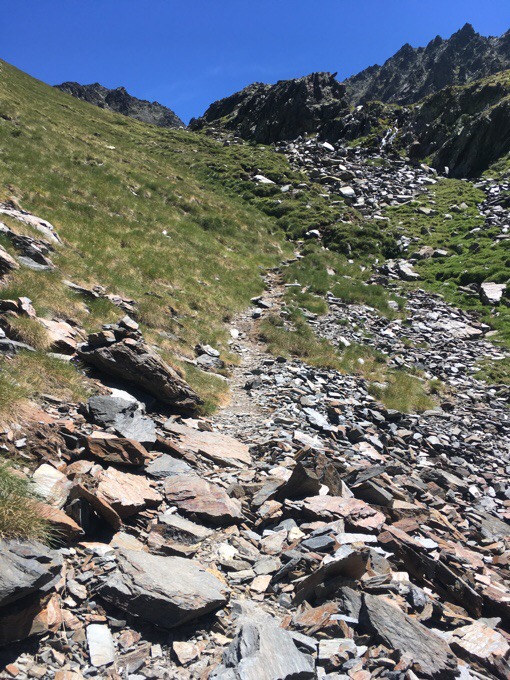 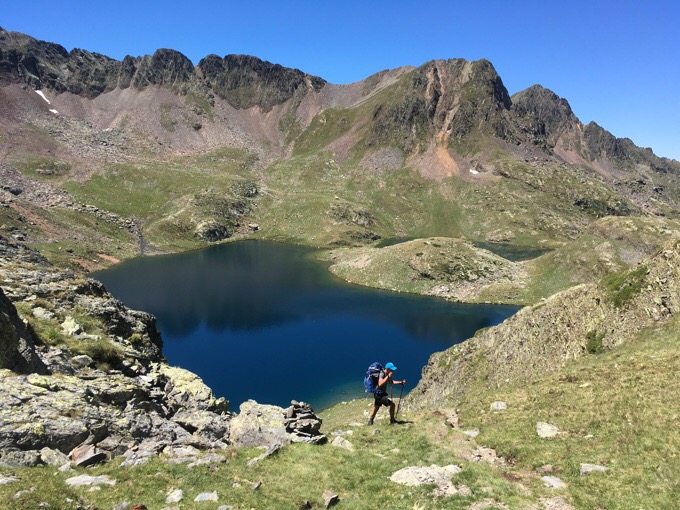 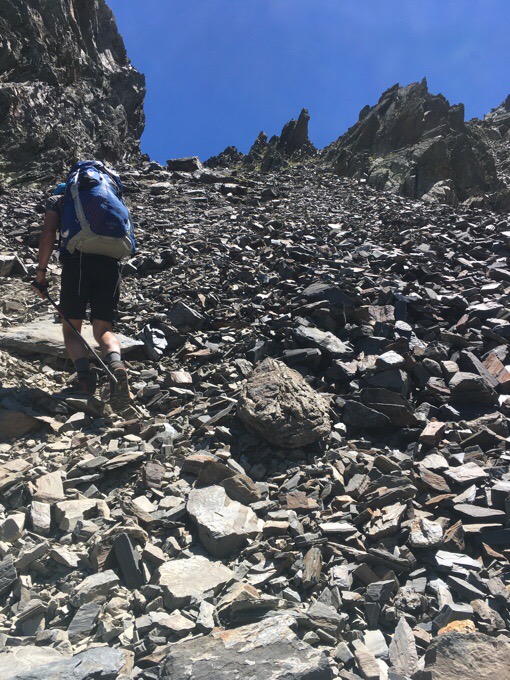 Once at the top, we were officially in Andorra. A whole new country! Klaas says they even have a soccer team that always gets slaughtered. It's such a random little blip of a country on the Spain/France border. We were just an hour or so from the next refuge where Klaas planned to end his day. I knew I wanted to hike on a few hours more, so we parted ways as he took a break up top. We both are booked for the same hotel tomorrow, so we will probably see each other again. 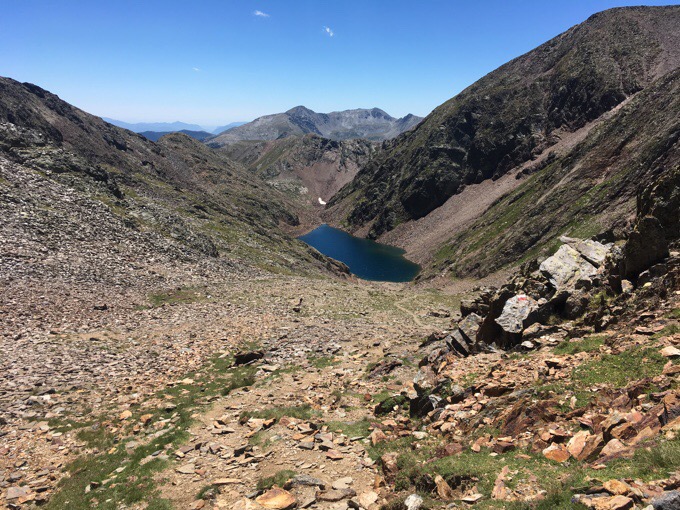 Within minutes of going down, I saw Avi the GR11 hiker again. He had just finished a quick swim in a lake with Adrian from Spain who is on a long vacation between posts in the Spanish military and day hiking. He's the cheeriest person I've ever met in the military and he's been doing it for 12yrs. Avi has done well to hit the best of many world trails during his limited time off each year. He coincidentally did the John Muir trail the same year I did in 2012. Turns out Adrian had a car parked right where Avi intended to finish his hike. The three of us ended up hiking down an hour or so together. 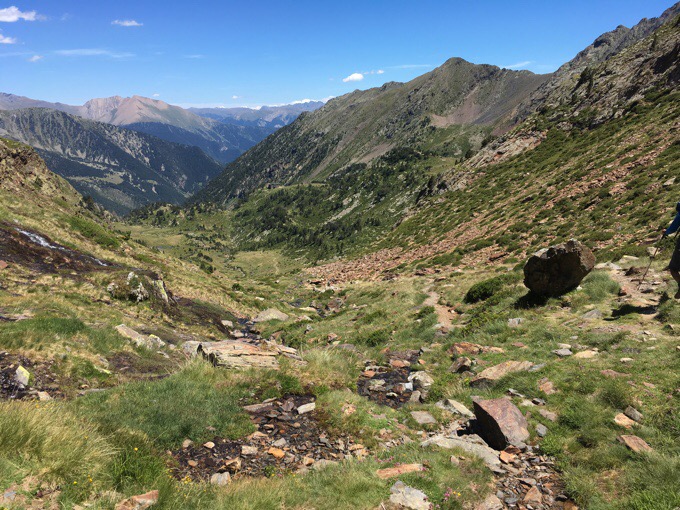 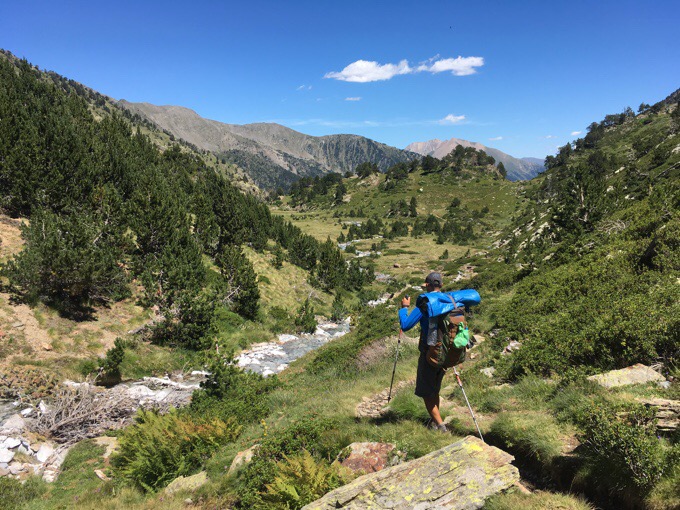 Adrain knew very little English, but is about to take classes this year and was eager to chat. It was pretty amazing what all we could talk about giving both our limited overlaps in the languages. Avi even knew some Spanish, so it all worked out. I just find it cool that in one day I can hike with a Belgian, Israeli, and Spaniard and that's totally common out here. I said bye to Avi and Adrian at my turn off and headed into onto the next section definitely off the GR11. 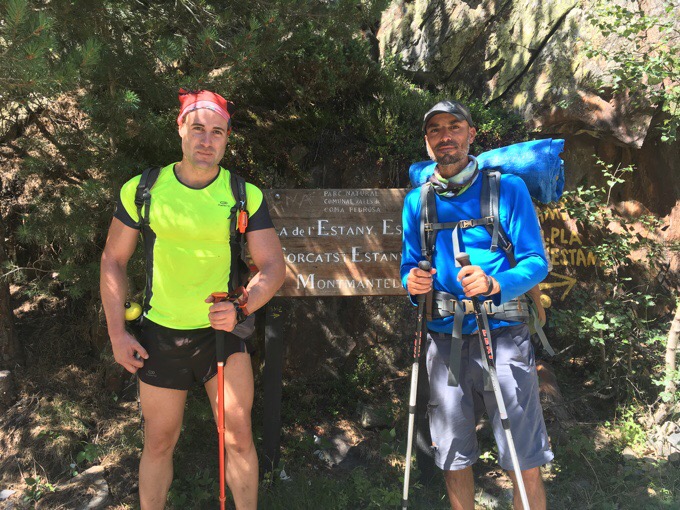 It was pretty hot, but the uphill was quick before I got a nice wooded stretch that looked down on the town of Arinsal. 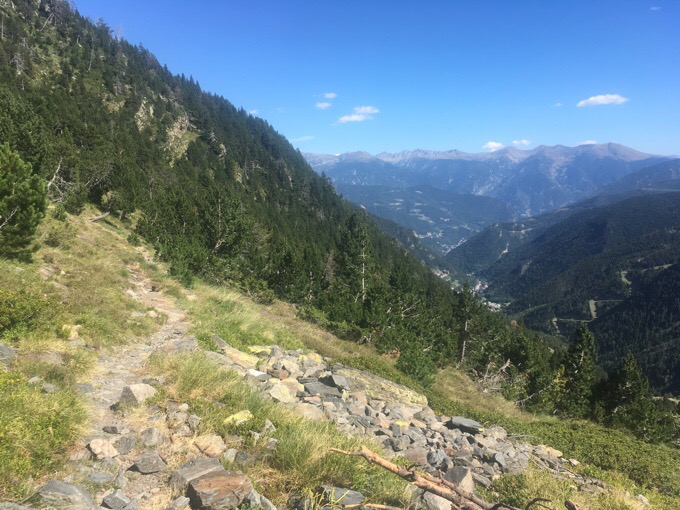 I checked my phone and had great service. I was about to work on posting the blog when I got a text from the phone company warning me about charges because I'm in Andorra. I texted Angelynn (who put me on her France SFR phone plan) and yes, because Andorra and Switzerland are not in the EU, they are not part of my phone plan. Minor hiccup as I'm really not in Andorra long, so I'll be relying on solely wifi to post and posts may be delayed a few days. Still, I've been super lucky because just a month or so ago, a law was passed that all the EU countries wouldn't charge roaming. That would have been an issue since I've been going back and forth on the Spain/France border.

It was almost 6pm, and I was trying to decided when to grab my final water for the day and start looking for camping. It looked like there was a possible spot with water an hour away. I was in the mood to walk, so I passed a stream and headed on. Then a few minutes later, I came to a good spot to camp. I decided to settle with that rather than risk an unknown area an hour away. It was a solid day of hiking and I'm positioned well to make it to my hotel by the noon check-in tomorrow. I walked back the few minutes, grabbed water, and was ready to camp at 6pm. 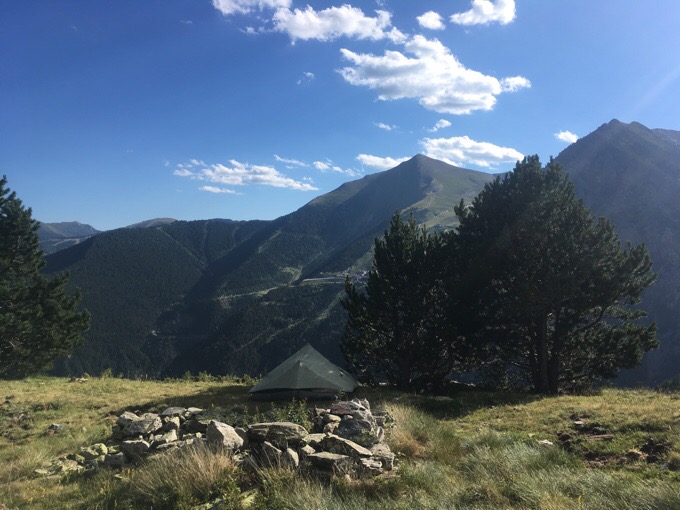 I unpacked my stuff and got my dinner out to cook. I reached back for my pot and it wasn't where I put it. My stomach dropped. I reached in my backpack. Nope, empty. I double-checked the whole tent. Yep, I freakin' left it in that little refuge last night! Dammit! This is why I can't function when a lot of people are around! Dammit! I had flavored precooked rice that I ate in a tortilla cold without heating it up, and that was fine. My problem is that I have two dinners left that require cooking, (ramen and spaghetti) and no grocery store option for changing that or a store to get a pot. I think I can cold soak the ramen, but probably not the pasta. I'll probably have to buy a sandwich or dinner at a refuge one of those nights. At least it's not the end of the world, but I am pissed at myself! Why Not and Jim will be there in 4-5 days, but then the pot may not be there, and if it was, they'd have to carry my pot and sometime send it to me maybe 5 days after that. I'm probably just going to have to buy one. I'll make calls while in town tomorrow and see if the next town has options. I'm so annoyed with myself. The food thing is surprisingly not bothering me. It's just the pain of dealing with getting it back or replacing it. Maybe this will be the tipping point and I'll become one of those no cook people like Why Not and Jim. I just can't imagine that! 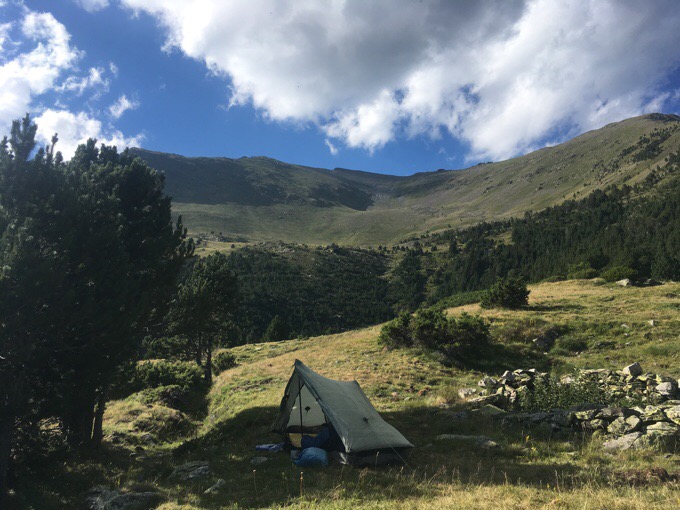