Day 29: Leaving It In Fate’s Hands

I slept like a rock last night. Hopefully, I’m on the upswing now. I started hiking at 8am and said my final goodbye to Klaas who will be doing two short days to then meet his wife and son in town and hike together. It was fun overlapping with Klaas the last few days. The hiking today was fairly uneventful. It was a Sunday, so a fair amount of people were about when I got near lakes or junctions. The morning started off with a gradual downhill into the Vall d’Inclès and then a relatively short climb up and over Port de Frontargente. 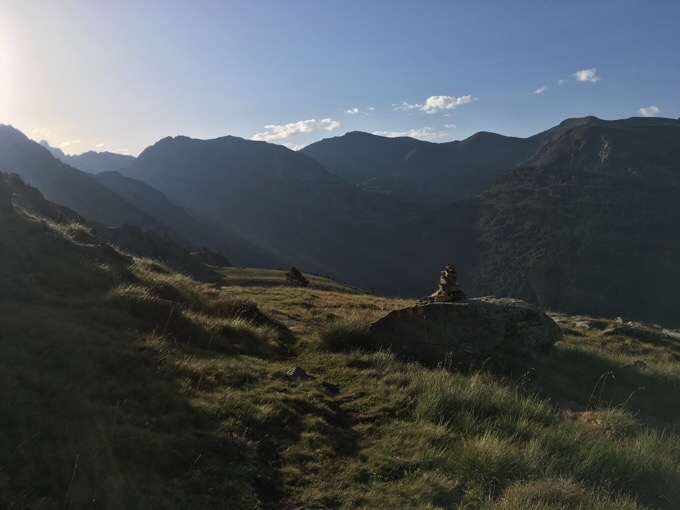 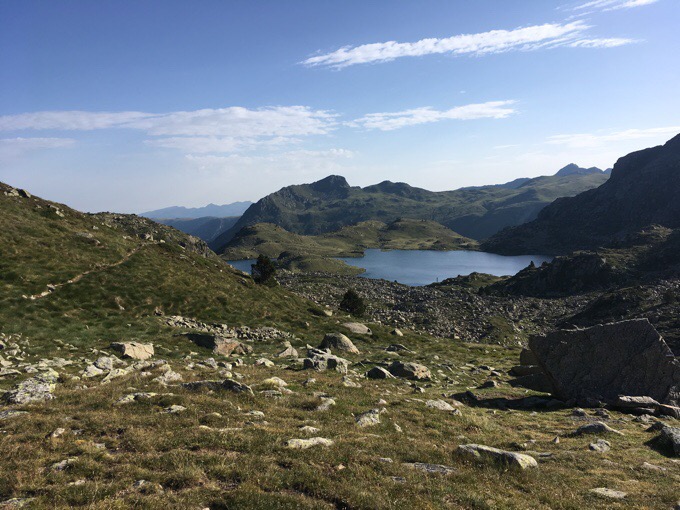 Somewhere in here, the rough, slow, and rocky terrain began and continued on mostly that way well into the afternoon. It was definitely a headphones and music only kind of day. I went over the col in the middle. 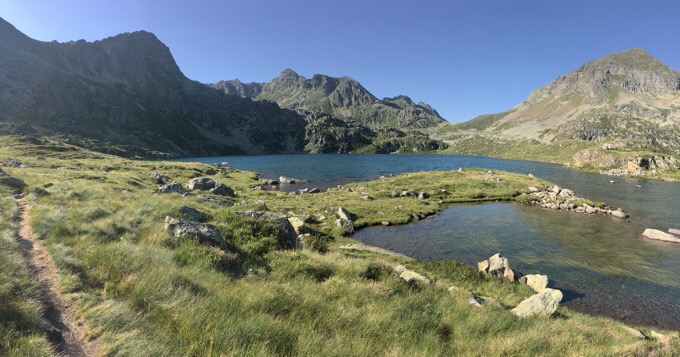 Since this is a route with various kinds of terrain, the guidebook doesn’t give any distances, and only gives an estimate of how long it should take to get from one landmark to another. Again, like the last two days, I was happily surprised to find that I was going much faster than the book times. I know this isn’t just me as Klaas was experiencing the same thing. All I’m saying is that it was slow going on the rugged terrain today, so I don’t think I went far in distance, but given the time estimates in the book, I hiked more than 1.5 days of what the book estimates, so that was encouraging.

I’ve gotten the hang of this guidebook and how it sometimes ends a day at a refuge that is an out and back (without pointing that out ahead of time) so people have that option if they want a refuge. Since I don’t end my days at the endpoints, I often hit these midday and have learned to turn the page and look ahead to see if the route actually goes by the refuge or if it’s and out and back. The one I hit late this morning to Refuge du Rulhe was quite a long and strenuous out an back. I was really glad I noticed before making that turn. From that junction, I headed up the long undulating climb of the day up to Port de l’Albe. 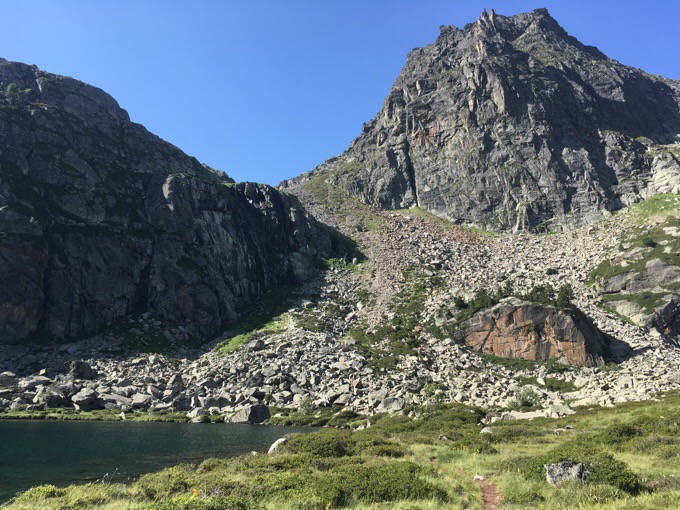 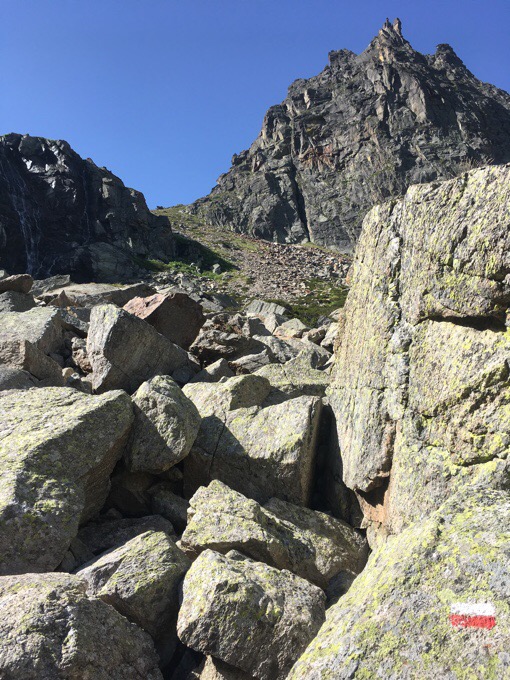 It was only 1600ft/500m, which is short by HRP standards, but with the rocks and uneven terrain, it took awhile and was taxing. Many people were in this seemingly popular area with many lakes that had tents pitched along them. Once over that pass, I was back in France and out of Andorra. I could use my phone! 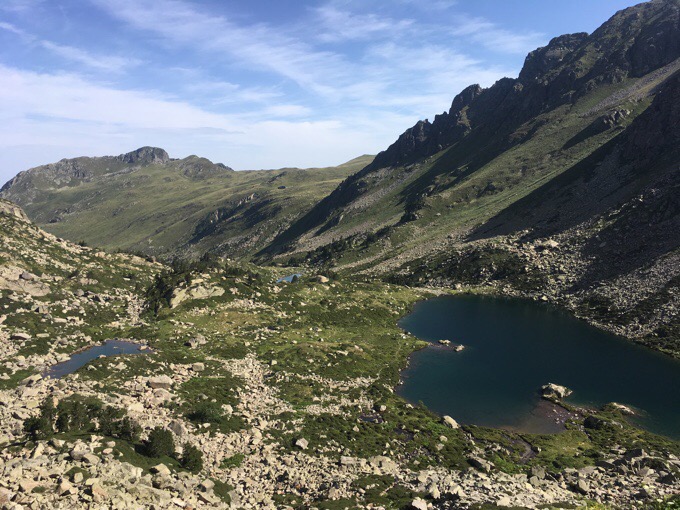 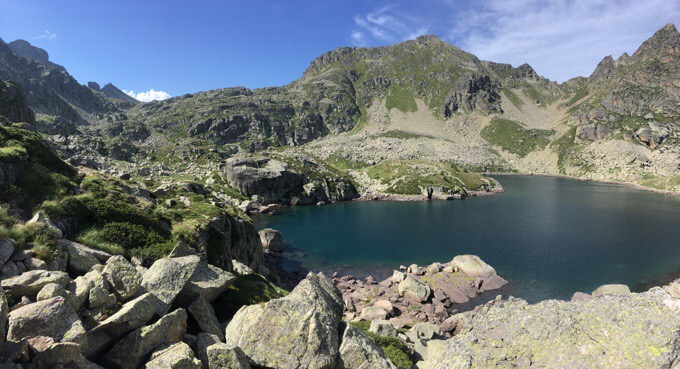 It was a day of lakes as the trail then gradually went down the rest of the day. Still, it was on rocks, so that was tiring mentally and physically. 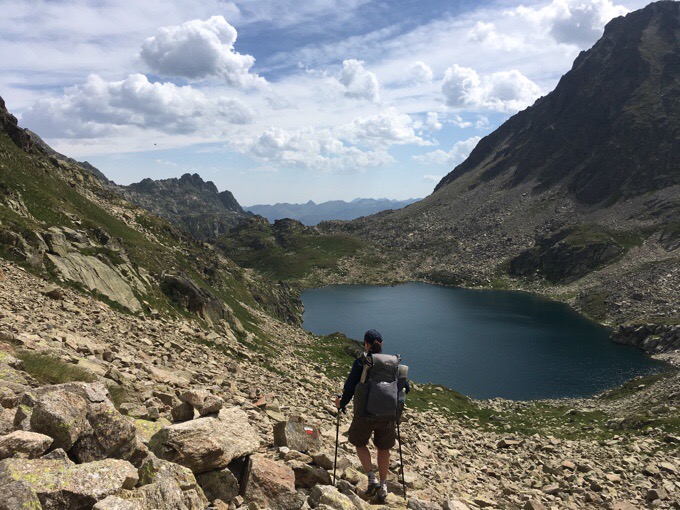 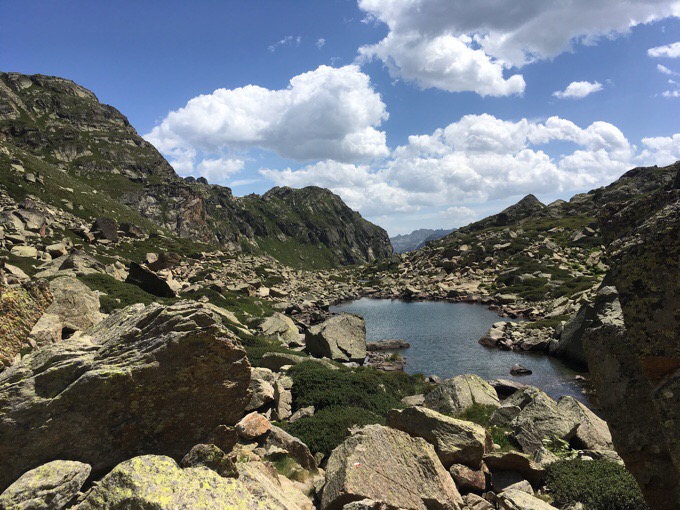 Overall, the drop down to pres-l’Andorre (Means small village just outside of Andorra) was 3600ft/1100m. It was a long and gradual down. The lakes just kept coming with every drop and turn and that was enjoyable. 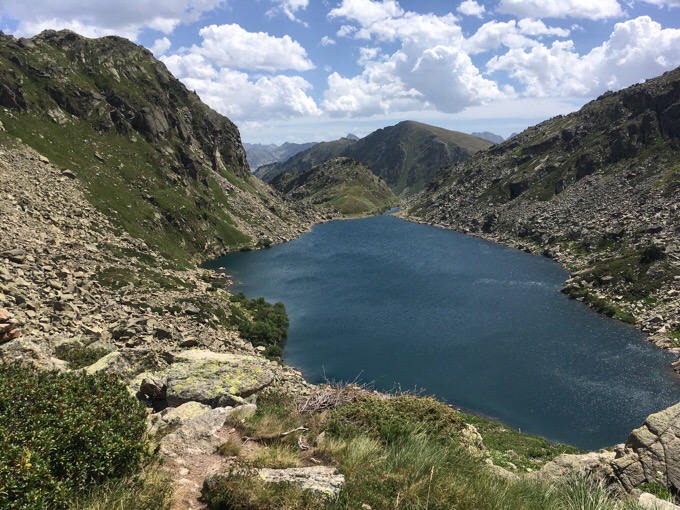 The final section dropped down a valley with fewer rocks for a couple hours, yay! I made it to l’Hospitalet-pres-l’Andorre at 3:45pm. This is where I needed to grab a couple days of resupply, but today was a Sunday, so I wasn’t sure the tiny store would be open. I decided to just hike there and if it was closed, it was fate and I’d stay in the gite in town. My body was very non-opinionated on this matter. If I stopped it was enough, but if I kept walking, it was fine with that too. It turns out I made it 15mins before they closed! The fates had it, I would grab some food, post the blog, and hike on out and up. 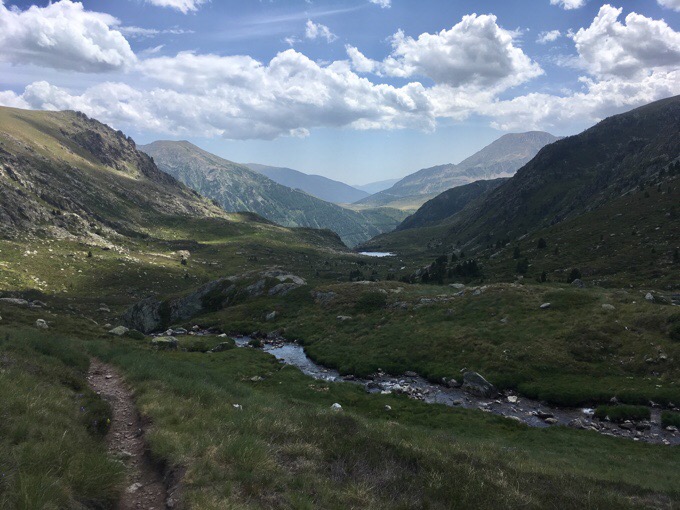 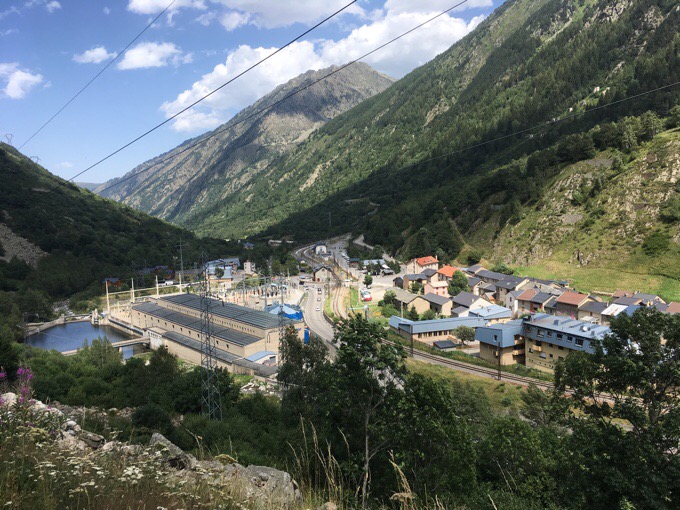 They weren’t kidding when the guidebook said it was a tiny store. It sure was! I was able to grab enough to get me through and even got a huge can of beef ravioli to cook for dinner since I wouldn’t be hiking much further and only needed to carry trash for two days of food. The woman there was really kind and let me sit inside and top off my phone while she closed up. Knowing I had a long climb out of the village, I didn’t buy the big can of chocolate pudding calling my name. Lesson learned last time on that one. Instead, I got a strawberry smoothie ice cream bar. Oh man, with the heat today, I could have had three of those. I cautiously stuck to one reminding myself of the climb ahead. 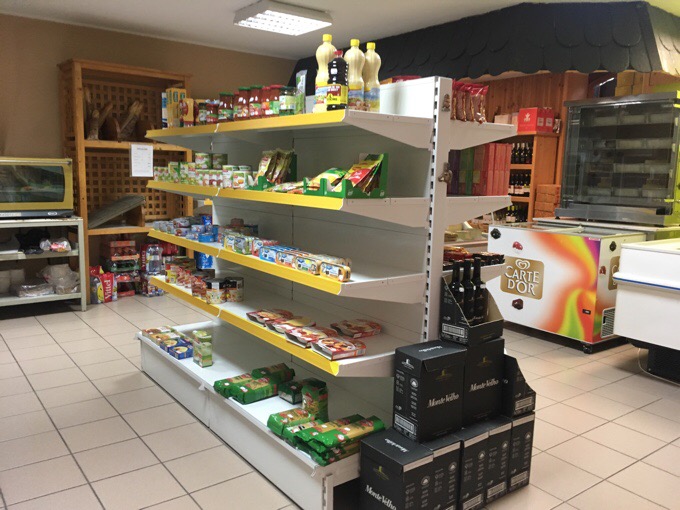 I walked out at 4:50pm after a bit of blogging and other things while I had service. I was not sure where I’d find a spot to camp, but was feeling up for walking and was ready to accept whatever came along and however long it might take. I saw the elevation was quite steep, but it said nice pine forest and I love camping in pine forests! It was a nice gradual path, but it was on a ridge with really no flat spots at all to pitch a tent other than the middle of the trail. 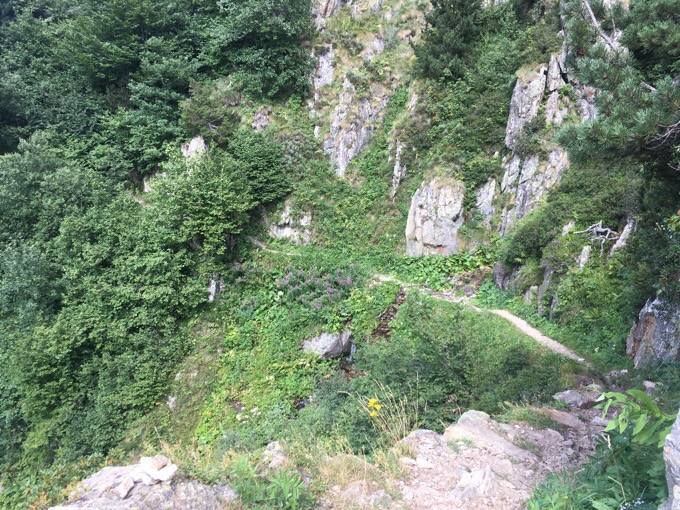 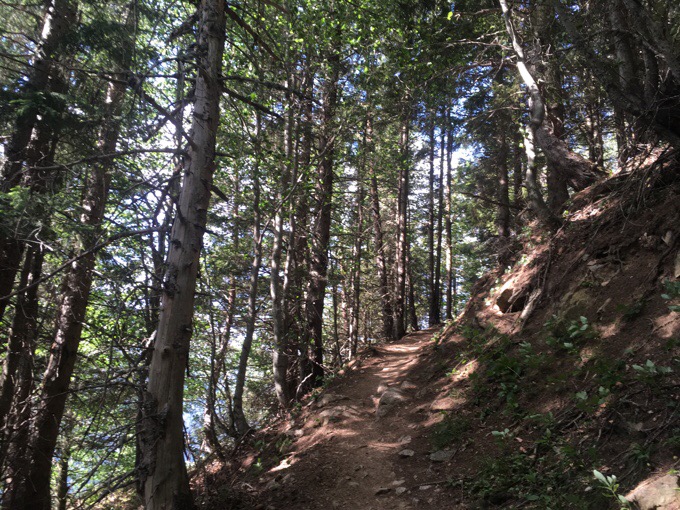 I continued on knowing the contour lines indicated a possibility further on. When I hit the area, it was sadly out of the forest and in tall grass. However, it was flat and looked to be my best option for awhile. I walked off into the field where the grass wasn’t as tall, but it was surprisingly spongy and marshy. It took a bit to find a dry spot that was flat, but I finally did and was at camp at 6pm with a great view. Score one for the fates! 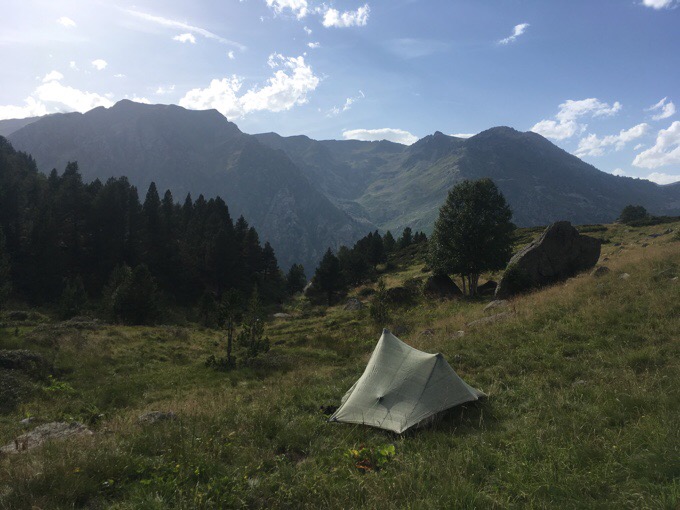 I won’t be surprised if there’s condensation in this area, but I might get lucky. I can see fog settling in the valley that the village was in, but I’m off to the side in another valley that it seems to be staying out of. There was a small possibility of showers today, and there has been clouds, but hopefully it will stay dry overnight. My ravioli dinner hit the spot, and I even have some time to watch some of the “Fantastic Beasts and Where to Find Them” movie. Yep, happy camper tonight! 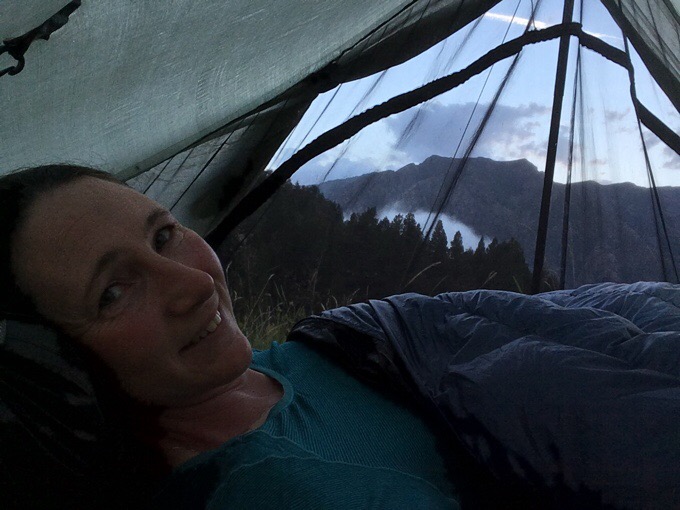