*Note: A reminder that Why Not is also blogging about the HRP and other routes she’ll be doing over the next three months with Jim. Also service will be spotty out here so posts may be a bit delayed and come in batches when I get service.

﻿Oh man, today kicked my butt. Part of it may have to do with the fact that I stayed up until 1am last night posting the first two days of the blog and catching up on some emails. Reception at our campsite was stellar, which is hard to come by out here, so I purposely stayed up to take full advantage of it while I had it. We started packing up around 6:30am and were quite proud of ourselves for sleeping above the fog and under the trees. In the photo here you can see the far peninsula we contemplated camping slightly lower. It would have been in the fog. When we left our camp spot around 7:20am, we realized the grass not under the trees was drenched. Yeah, we scored on that one for sure. Something to be aware of when camping in the Pyrenees. 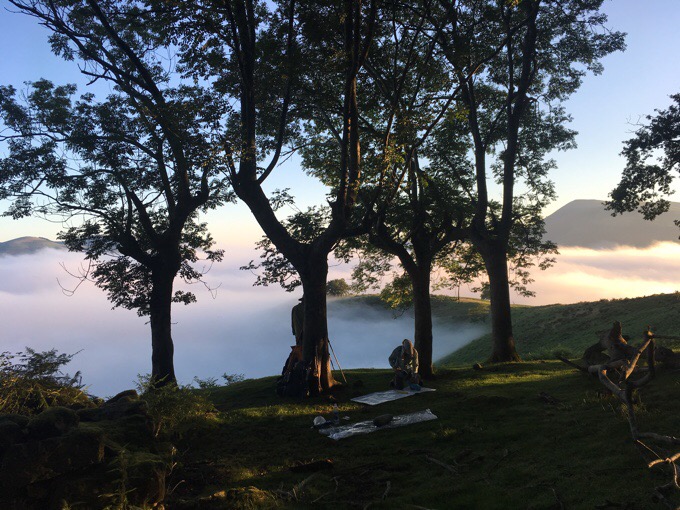 Another thing apparently is that ticks are out here! We saw one on a dog the other day and wondered, and today Why Not woke to find one attached to her shin that somehow got there after she washed up last night. Not good. There’s a ton of grass to lounge in out here and now I’m going to be paranoid every time. Does anyone know if any of the ticks here carry Lyme Disease?

The morning hiking went well. It was slightly humid and warm for a morning, but we knew it was expected to get pretty hot today and tomorrow with highs around 90F/32C. That combined with today’s terrain was quite tiring. The climb up to a high point on a crest called Burga was my favorite so far. The forest was enchanting and the ground was covered in leaves. The shade was greatly welcomed. We topped out with a great view on Burga before diving down again into a forest. 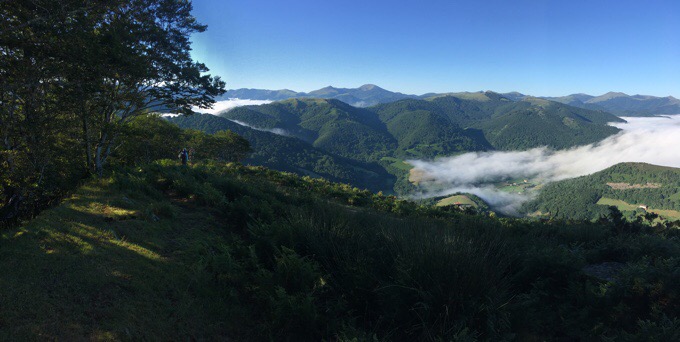 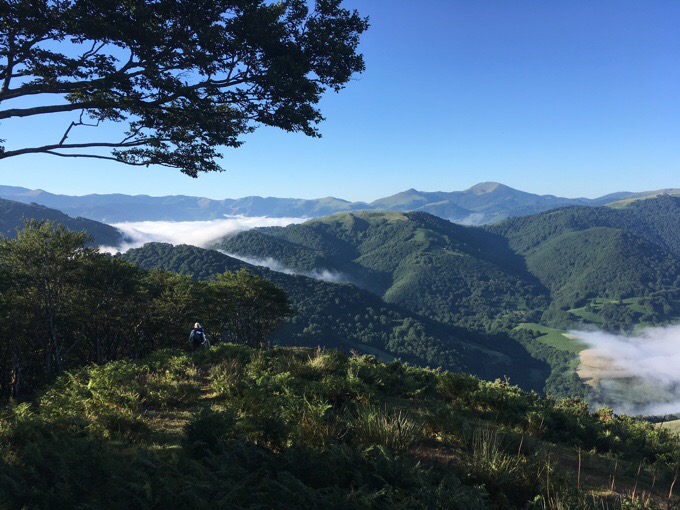 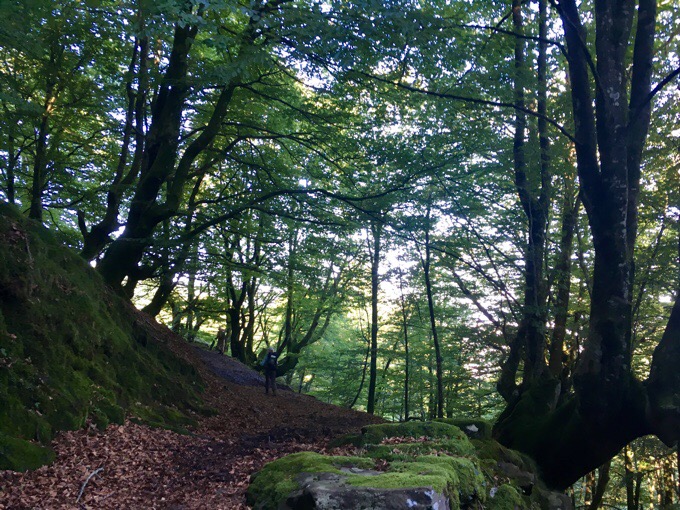 The big unknown for today was how reliable and quality the resupply would be when we dropped down to Les Aldudes. 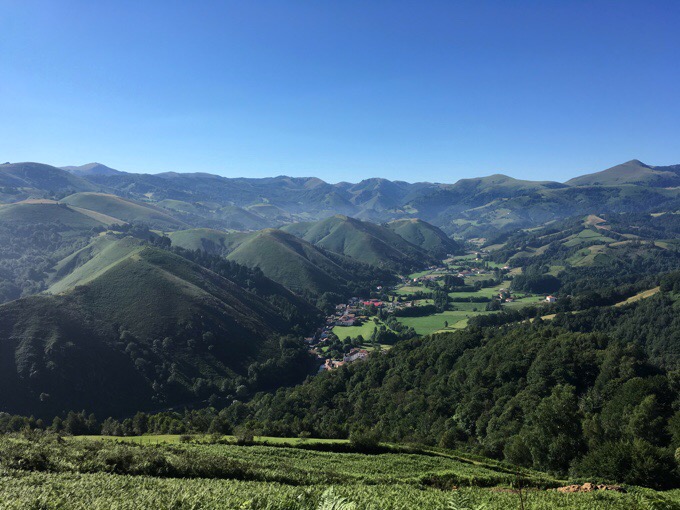 Looking down on the small village of Les Aldudes.

We calculated that we will probably need another 3.5 days of food before hitting Lescun for a night in town. I want to take this opportunity to thank the many people who contributed beta that we are using (Amy & Jim, Tom Joosten, Charlie, Seth, and Jerry). It’s been such an asset. I know many are following this journal to study up for a future HRP hike either this season or in future years. Here’s the link to the resources we’re using and I’ll attempt to add some beta if I see anything worth mentioning. Do know that all three of us are veteran thru-hikers that enjoy physically challenging days. The guidebook is split into very helpful sections of what could be a daily schedule. I suggest people follow the guidebook than our pacing as most would find our pacing unenjoyable.

Why Not and Jim will buy a bit less to have lighter packs and probably hit a couple restaurants along the way (a common strategy), but other than restaurant food, Les Aldudes is the spot to get the remaining days’ food supply. I bid farewell (for now) to Why Not and Jim, who were going to spend more time in town today than me. We enjoy one another, but knew our plans would be different. We think we may all hit Lescun the same day and spend the night, so we may see one another in a few days. I might even see them tomorrow for all I know. Either way, we were happy to get these last couple days together and it worked out just as we hoped. I said farewell as they were doing some organization with the guidebook and various beta. They are much better at noting details than me! 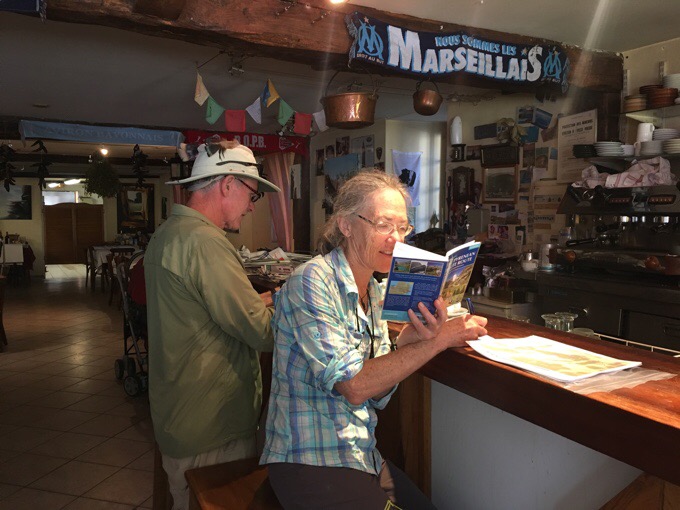 The store was a medium one attached to a gas station. I had some things and got more to make it 3.5 more days. It’s pretty heavy stuff, but I’m just happy they had what I like and it seemed to be a fair choice. I’m noticing that energy and granola bars aren’t big out here, so peanuts may be my go to snack during the day. 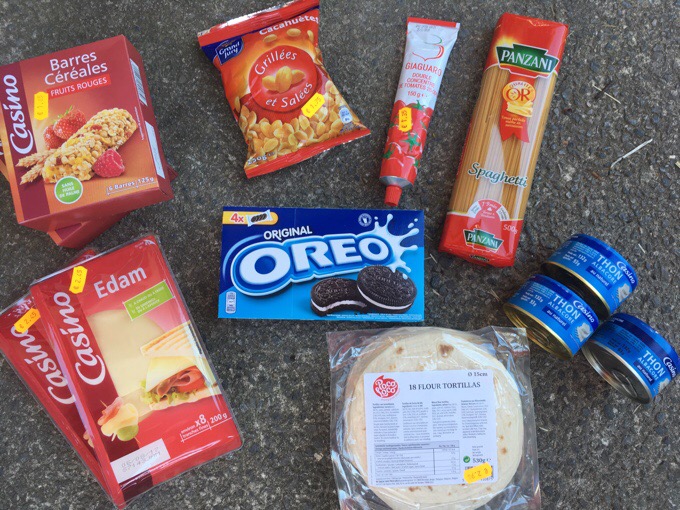 I left town around 11am and got a chunk of the climb out of the way before I stopped for lunch under a tree with a view. The heat was definitely kicking in, but a nice breeze and my Crystal Light raspberry lemonade hit the spot! 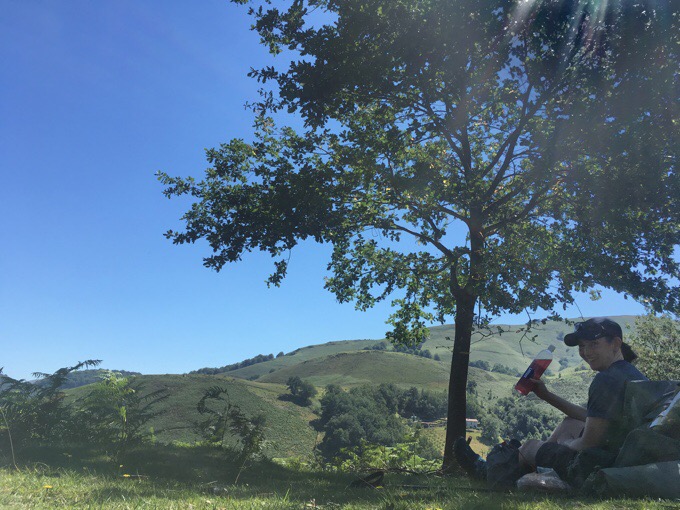 Next up was Errola Summit. Sometimes the directions are slightly off it seems from what’s on the ground. Using a combo of the guidebook and the gpx track I have from Amy and Jim, I made it to a shaded trough with a hose. It took some trial and error, as it seemed to be a dead end with barbed wire fencing all around where I needed to go. I noticed right near the trough, a portion of the fence bent upward to allow people to crawl under. I gave it a try and it worked. It popped me out right where I needed to be. I climbed up Errola and enjoyed the sweeping views. 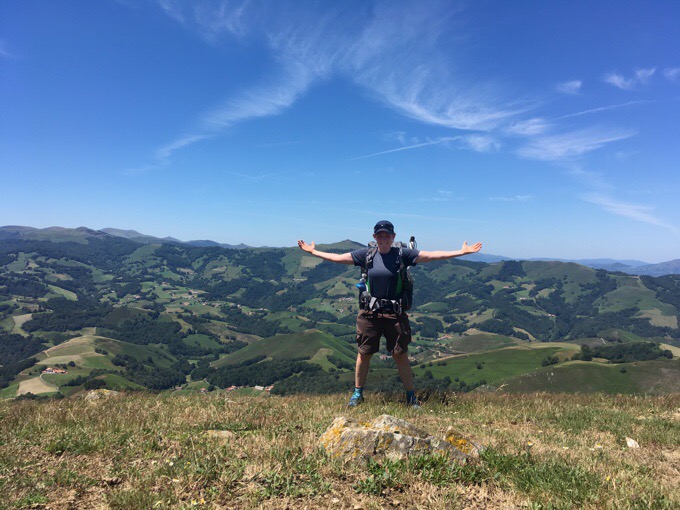 It was a really steep down. With the compounding factor of the sun and heat, I was tired the rest of the day. 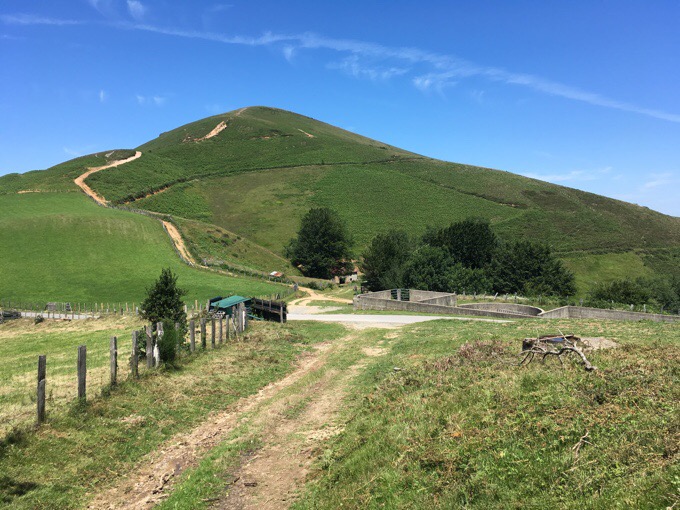 Looking back on what I came down.

Once at the bottom a road walk began that lasted what felt like a couple hours. I tried to be productive and listen to the podcast titled “Coffee Break French.” It has short 20min lessons of French you can in theory do over a coffee break. I was tired after 45mins, but am going to try to do a bit here and there. It does bother me I can’t communicate at least basically in French. Many of words are not easy for me to pronounce. I was using the Google Translate app to visualize them as well, but that wasn’t helping a ton. We’ll see. 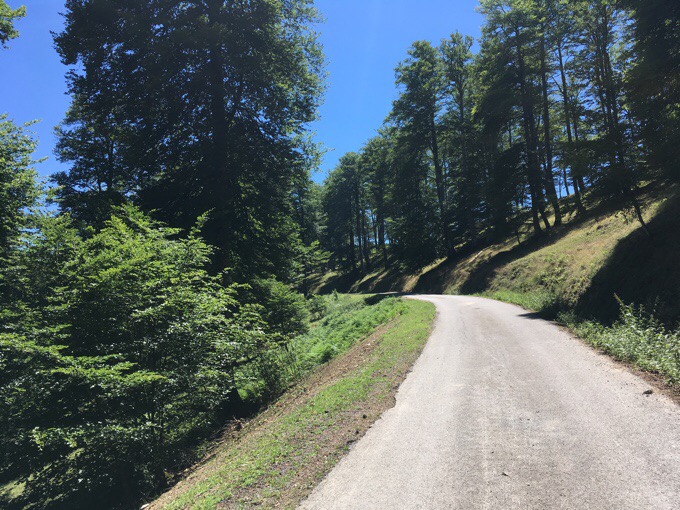 Along the road, I saw a few hikers, van dwellers, road bikers, motorcycles, and day hikers. It was more traveled than I expected. No backpackers though. At the end of that section of road was a really steep killer climb in grass up and over Redoute de Linoux. I basically collapsed up top for awhile. I got some weak phone service up top and the view spanned the furthest yet. The guidebook says the view of La Rhune, where we were on day one, is off in the distance, but I had no idea which one. The other direction, far off, was the higher Pyrenees with some snow that the trail will reach in a handful of days. Yep, these green hills are just the warm-up! 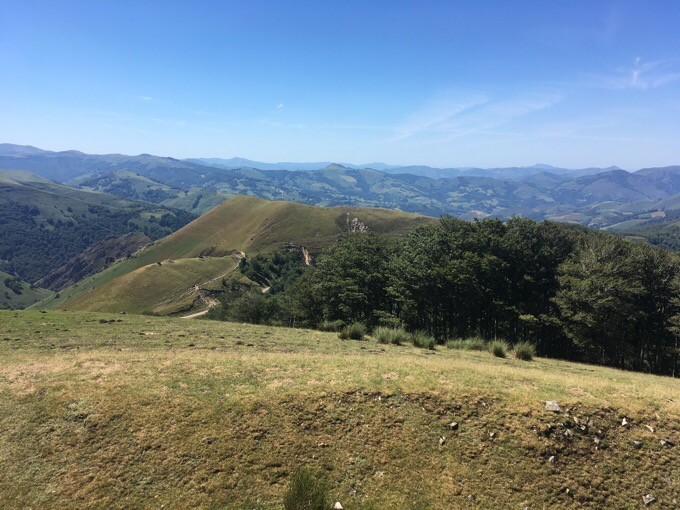 View from the top of Redoute de Linoux.

After an hour or so of more road walking (my still soft feet were killing me!) that was thankfully shaded, I reached the intersection of the GR65, aka the famed Camino de Compostella. They apparently complete their first day in the nearby Roncesvalles. It was pretty cool to cross paths with that. 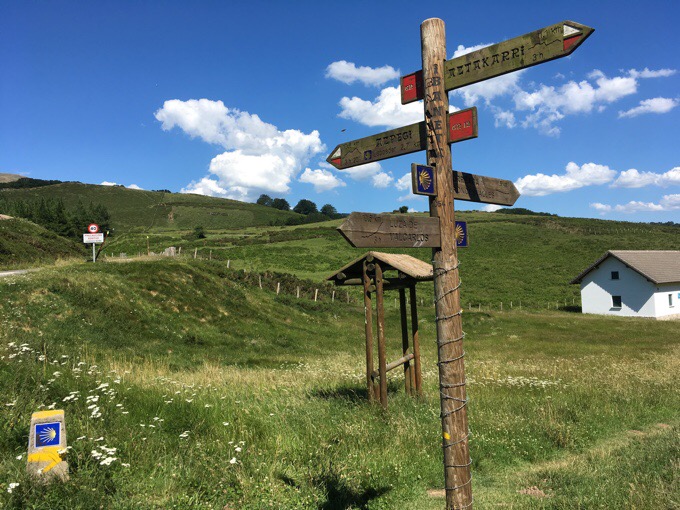 My plan was to camp in trees to block the sun that would be up until 10pm. Unfortunately, my first couple options were covered in horses with huge bells on them. No sleep would happen there. I reluctantly climbed up the exposed road with my umbrella blocking the hot sun on my back for another hour following the GR11 again for awhile. I stopped around 6:30pm at the last batch of trees up at Port de Cize/Col Lepoeder, where the GR11 and Camino intersect. I saw many exhausted hikers walking very gingerly along both paths needing to get to a refuge at the bottom of the hill I just climbed. Not an easy first day for Camino walkers. I’m not in the most ideal place, as it’s a grass Island surrounded by rarely used roads, but any further would be too exposed without trees and the wind kicking up tonight. I waited until after dinner to pitch my tent when all walkers will have passed so I wasn’t an eyesore. I’ll be gone early before anyone comes by. Whew, I’m drained! 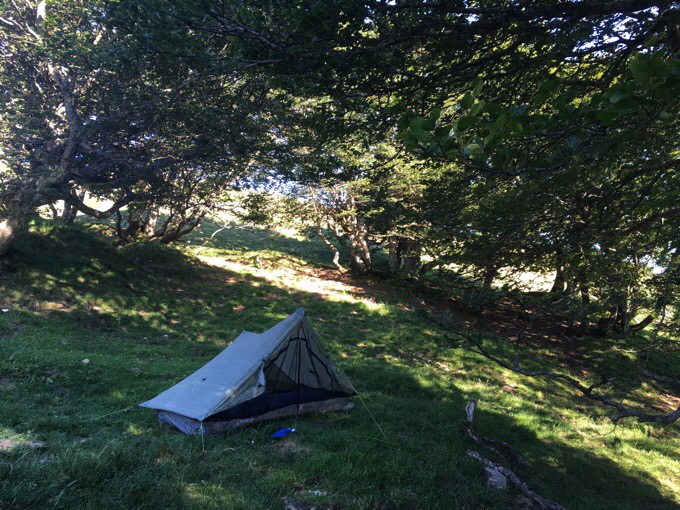