July 31st
1.5mi from Étang(Lake) des Bésines-Estany Llarg
Campsite Elevation: 6584ft/2007m
*No mileage available. The guidebook lists distances on the route by time rather than miles.

I did finish the “Fantastic Beasts and Where to Find Them” movie. I wasn’t a fan, but I can see that it’s possibly setting the groundwork for something more. I did listen to the episode of the Harry Potter podcast that was about the movie. It did make me appreciate the intention behind it all, but there just wasn’t enough depth in the characters for me, though I’m hopeful it will evolve.

I woke to wind and drizzle on and off between 6-7am this morning. Then I got a message on my inReach from Why Not. She has my pot! It’s funny that so many of you think my new 10€ pot with no handle looks like a dog bowl because Why Not said that when they found it at a refuge, it had dog food in it and a dog was about to eat out of it! I can’t believe it was still there with how much that pot is worth. Why Not is going to send it to the end of the HRP for me to get and hopefully it will arrive in time. I did some counting and I have a week or less remaining! I’m so excited to get my pot back!

Blue skies came quickly, so I was out at 8am with no worries about morning rain. It was a forested hike up to a refuge and then a bit of a rocky minor ascent to Col de Coume d’Agnel. 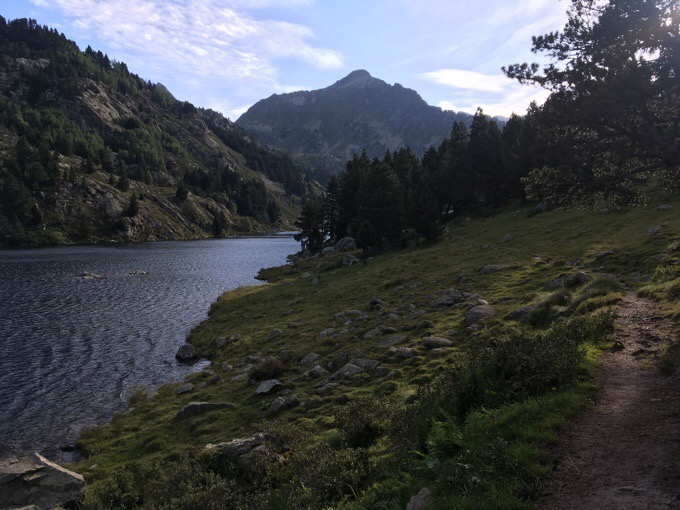 I had an off day for much of the day and couldn’t get comfortable mentally. I somehow triggered my anxiety, which I’ve really improved on in the last few years. Today, I just couldn’t shake it. I got myself worked up from the moment I woke up and didn’t shake it till the very end of the day. The two main factors were that the guidebook hyped up the summit of a peak (Peak Carlit) I was going over today to make it seem really stressful and gave alternate options for people intimidated or having foul weather. Second, the wind was strong all day and I had to put my buff on over my ears just to minimize what felt like a jet blowing into my ears. It was not a calming feeling and added to my worries of the peak I wouldn’t even get to until after lunch. I had all day to get anxious about it. I just couldn’t calm my thoughts and felt overwhelmed and then felt anxious about being anxious and got stuck in a cycle where I felt like I was falling all day. I hate that feeling. 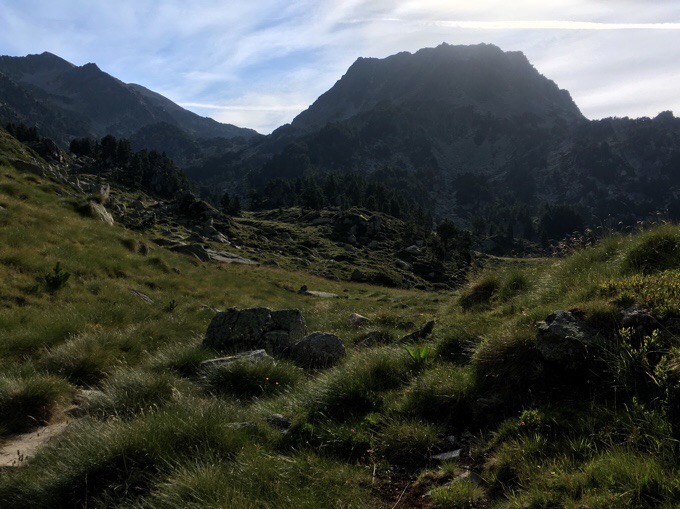 It wasn’t just the climb and the wind. I’m nearing the end of the trail and need to make some decisions. All day I played our scenarios of timing and what I could do with my remaining two months. The main question was if I had time to hit Barcelona since I’ll be near enough to get there by train at the end of this. I feel like I might have time, but then it stressed me to think about how just those few days could be needed in the other two hikes I want to fit in. My visa limits me to three months or I would have stayed longer. There were some other logistical things I was turning over and over that I’ve pushed out of my mind until now when I need to face them. In the end, I’ve decided not to do Barcelona and I feel more relaxed with that decision. Now I just hope I don’t finish too early to get my pot mailed to me since it will be some days before Why Not hits a post office.

Back to today, after the col, it was a nice gradual descent and then actual level trail for almost an hour it seemed walking along Étang de Lanoux. 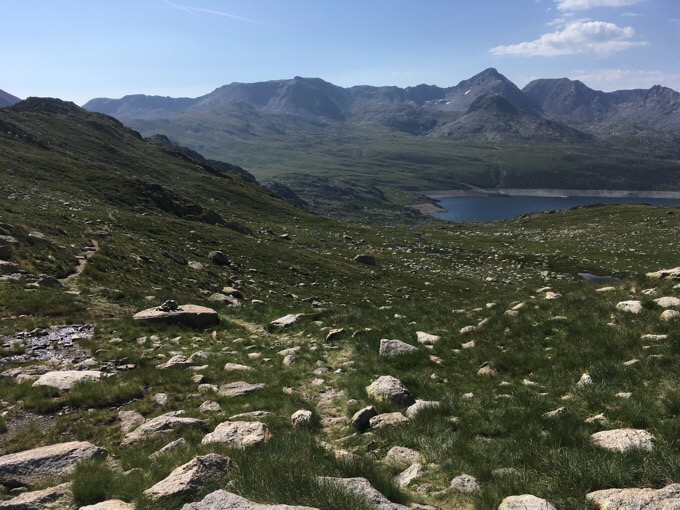 There were many intersecting paths and I kept thinking I was going the wrong way, but I finally got to the base of the climb up to Pic Carlit. At 9582ft/2921m, it’s the highest summit of the eastern Pyrenees. I ate lunch at the bottom behind a rock shielded from the wind. Looking at the climb, I was relieved to see it didn’t look bad at all. It was just compact gravel switchbacks. Here is Pic Carlit. The path goes up the scree in the center. 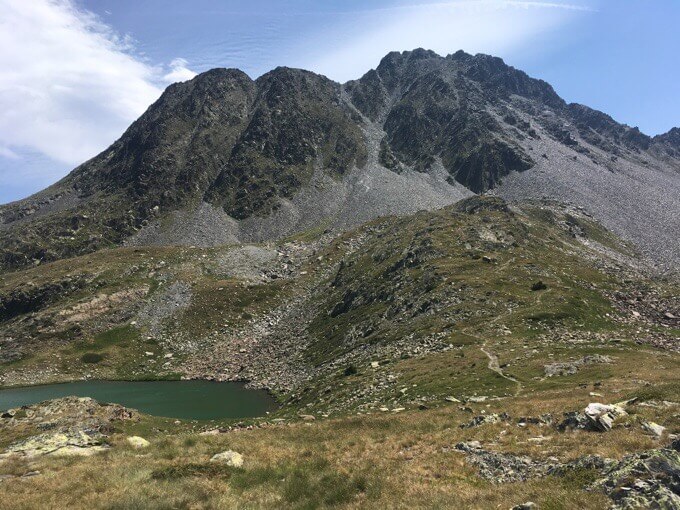 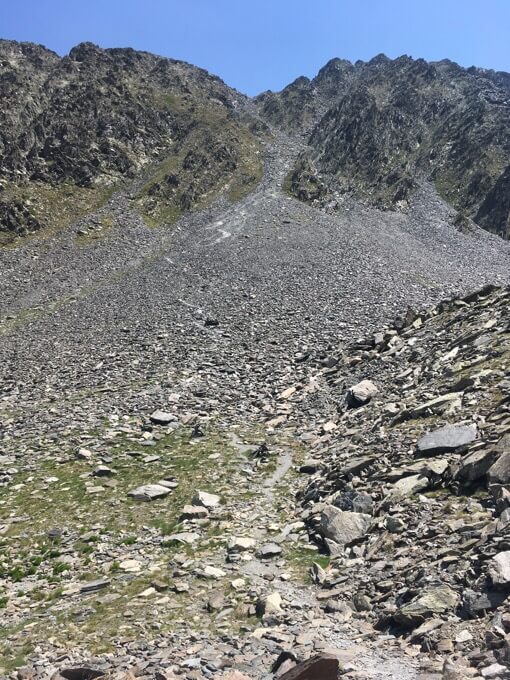 The guidebook said it would take 1.5hrs, so I took it easy and didn’t push it. The wind came and went, but wasn’t too much of a hassle other than the sound and some rock and dirt kicking up at times. It went so much easier than expected and was a big relief when I made it to the top in an hour. Here’s the view looking up and back as others were descending. 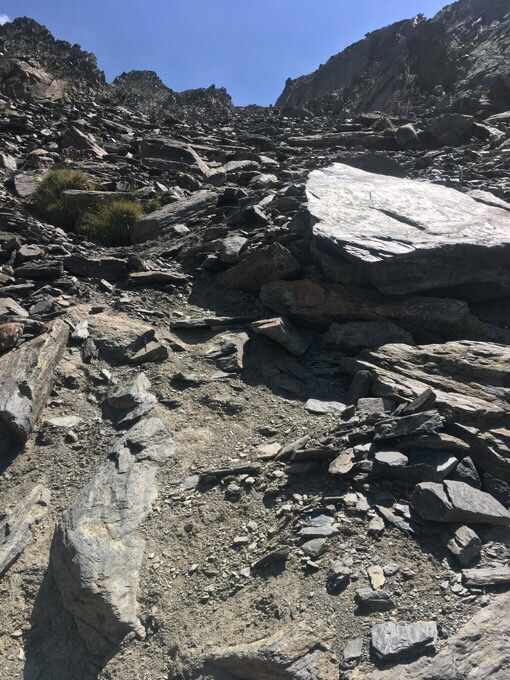 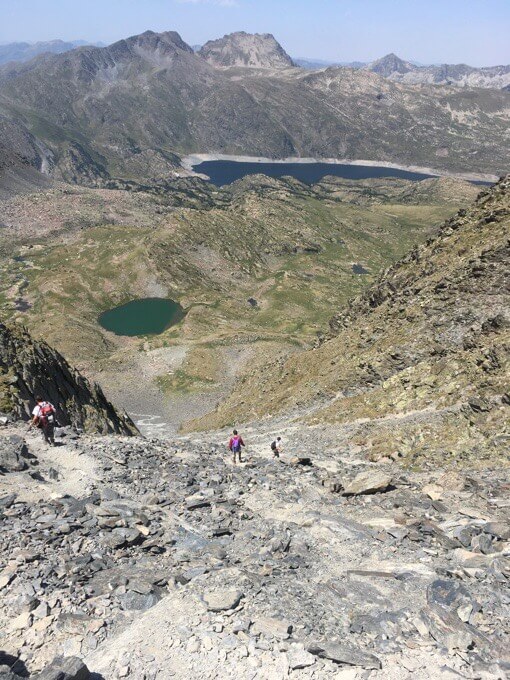 The wind was surprisingly calm, so I was up there about an hour posting the blog, emailing, and even Skyped with my sister and nephews. This is popular climb from the other side, and many people were up there. The downhill was not as steep on the other side, and I finally felt a bit better as I headed down. 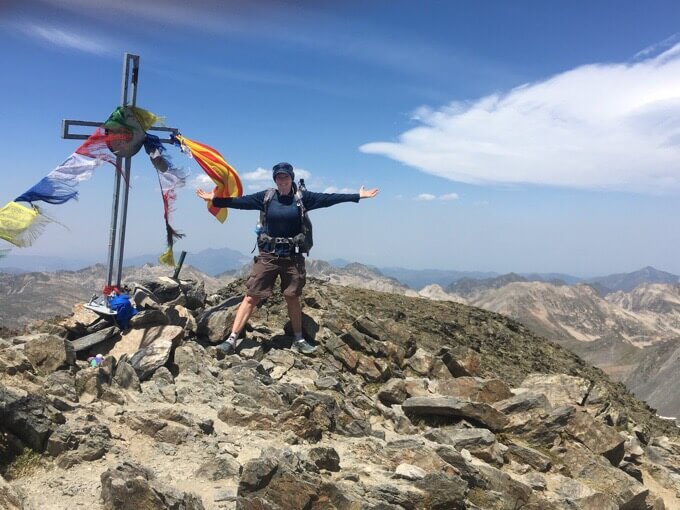 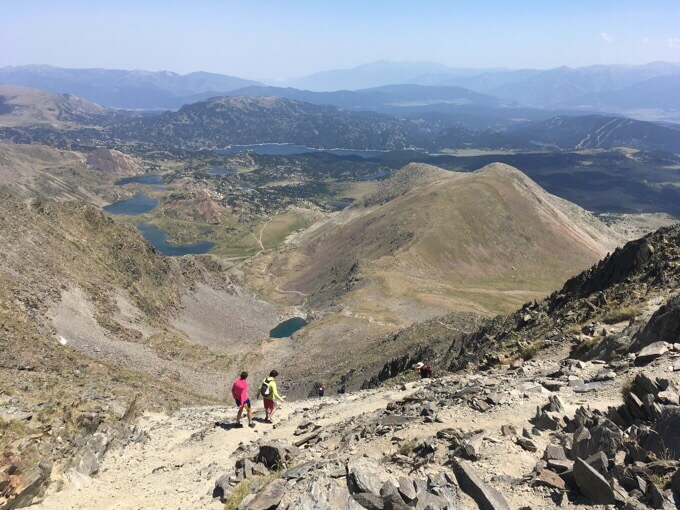 It did feel like an eternity though. It was two hours of downhill with tons of people and families to wade through. This is the busiest part of the whole route. I felt like I was in the US at a tourist trap. The wind was still blowing too and I got worked up again. I listened to some music and podcasts to try to distract myself. It was pretty rocky too, so I just couldn’t get a rhythm going with rocks and other people to get around. It was scenically quite nice and I understand the draw. 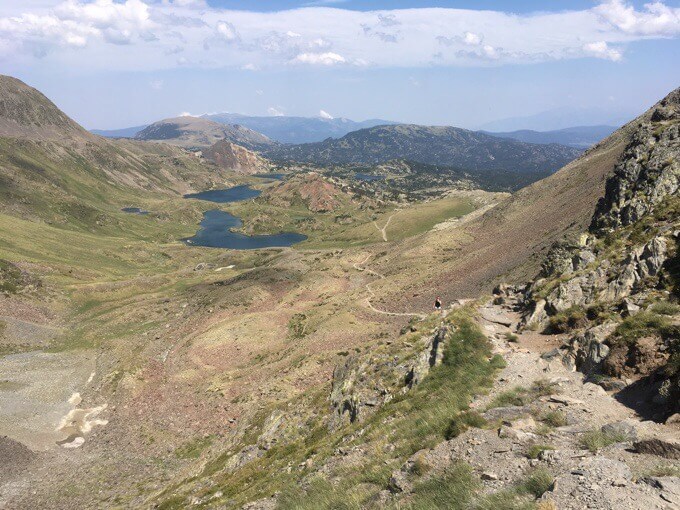 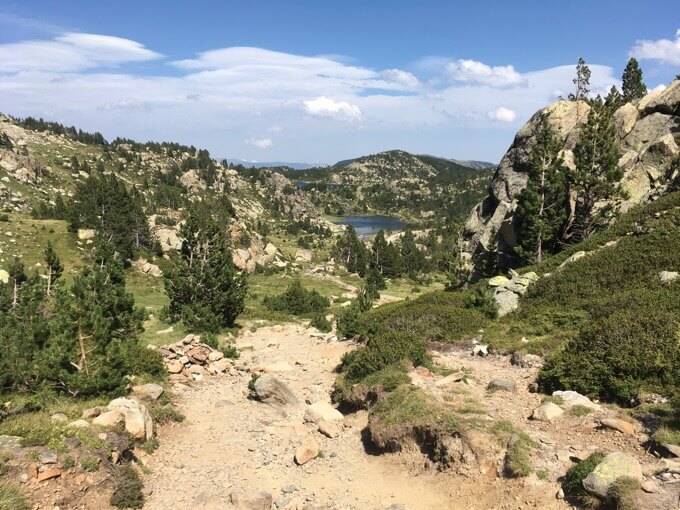 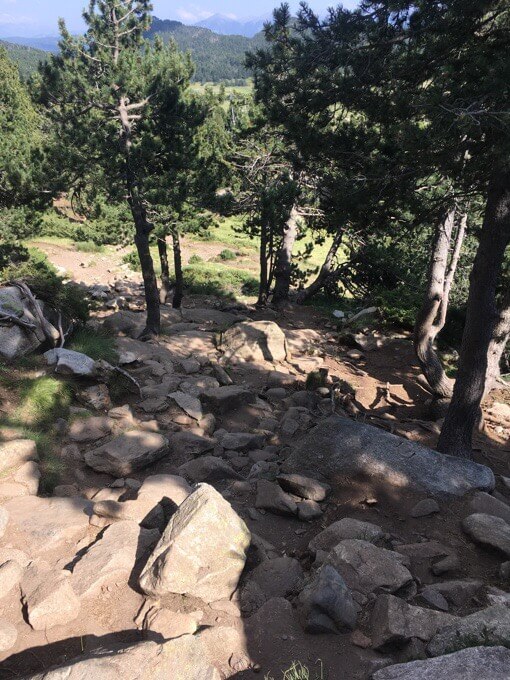 At the bottom was a big hotel with a restaurant, a dammed lake, and then a refuge and another place to eat. It was 5:30pm, and I just wanted to find somewhere quiet to be alone and camp. 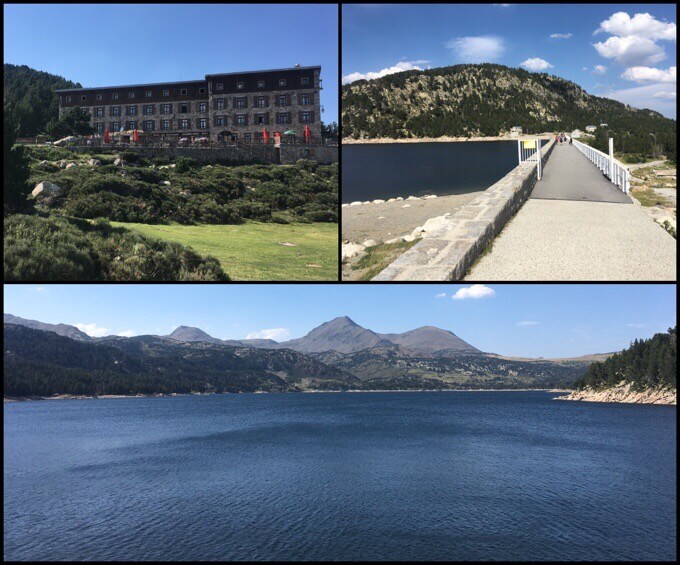 I rewarded myself with a chocolate ice cream and walked down the short road walk from the tourist trap to the bridge that entered the forest I was aiming for. It was heaven! All of a sudden, I was calmly walking in the woods on delightful trail with my ice cream. Life doesn’t get much better than that moment. Everything washed away and all I could hear and see was the wind in the trees. 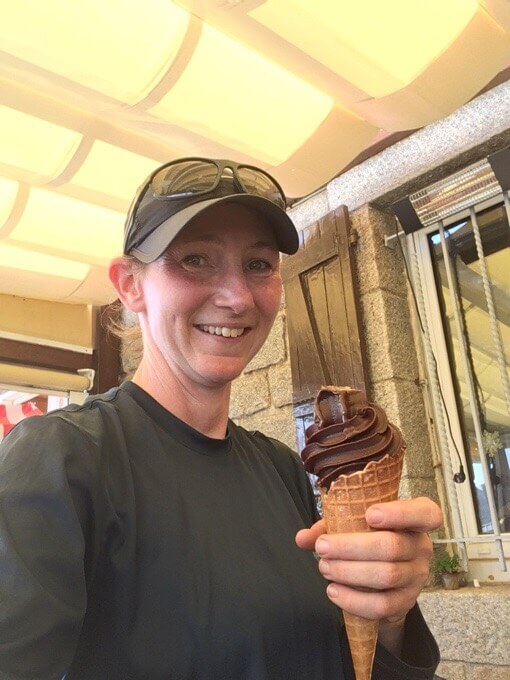 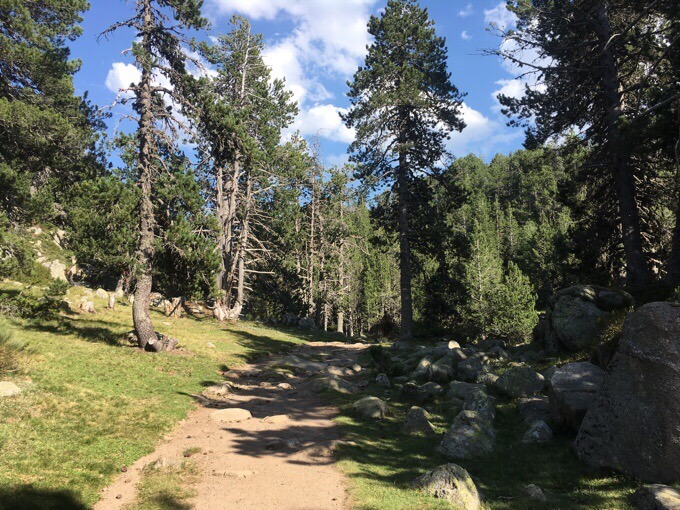 I came to Estany Llarg, and found what I consider my favorite kind of camping. On pine needles among trees with a peaceful breeze going through. Ahhhh:) This is my favorite spot of the whole route. 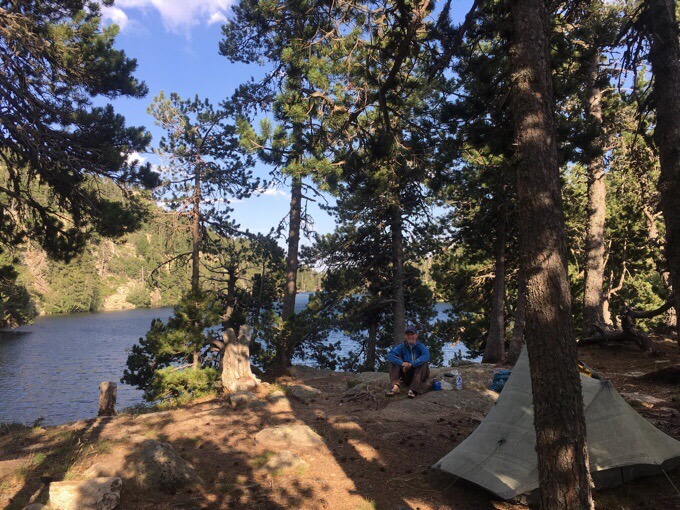 I was filthy and was able to wash off in the lake. I made my spaghetti dinner and just sat in the peace and quiet feeling the calm wash over me. Then, like the genius that I am, I somehow forgot I was holding my little knife in my hand (cutting cheese) and I went to organize my food bag. I managed to accidentally slice the inside of my index finger right across. Damn, that thing is sharp! Blood poured out immediately all over the rock I was on and I got to put my first aid kit to use. Note to self, I’m now low on toilet paper. I have it wrapped and taped tightly as it wouldn’t stop bleeding enough to get a bandaid on it tonight. I had to eat cold spaghetti by the time I got it under control. It has stopped, but I’ll still wait until the morning to put the bandaid on. 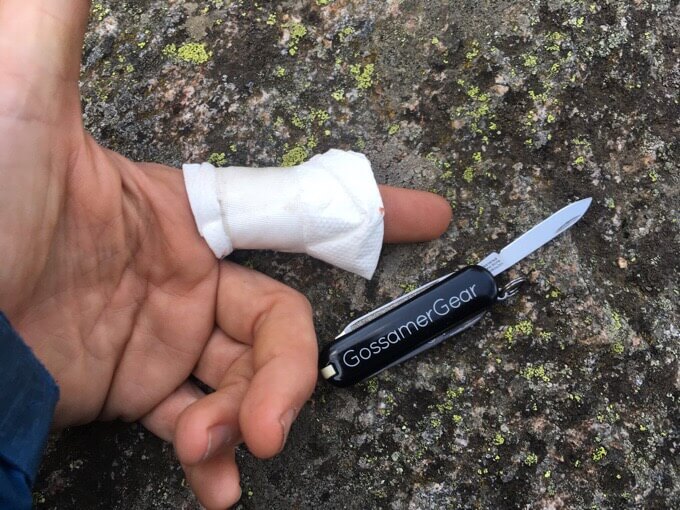 Yeah, I’m sure that will take forever to heal since all I do all day is squeeze right there with my hiking pole. I’ll have to work on not wrapping that finger around the pole. At least tomorrow’s hiking is easy. I feel so relaxed right now.