Whew, it was gusty last night. I chose what I thought would be a sheltered tent site, but those gusts went right through the trees very powerfully. They would blow through randomly throughout the night. It felt like the wind was going to pick the tent up and carry it away, but would last for short spurts and then calm again for awhile. To add to this fun, I also didn’t get much sleep because my sleeping pad kept deflating. I had to re inflate it four times during the night. I figured I would check it for a hole once I got to town in a few days, but can tolerate it until then. The lack of sleep compounded with the heat, and a short night of sleep the night before, had me feeling pretty tired this morning when the sun came up. I finished up my blogging and decided to fall back asleep because the wind died down a bit, and I figured I could get some uninterrupted rest. I did not leave camp until 8:20am.

Just as I was putting my pack on to leave, Why Not and Jim walked up. They had camped at the bottom of the hill about an hour back from me. I joke that I need to keep my friends behind me because I drop things all the time. Why Not found my handkerchief and a baggie of my business cards I managed to drop in two different places. She lost the handkerchief, so that will count as my first lost item. Only took 3 days people! We hiked the rest of the day together. Again, there was a lot of dirt and paved road walking. Nice views! 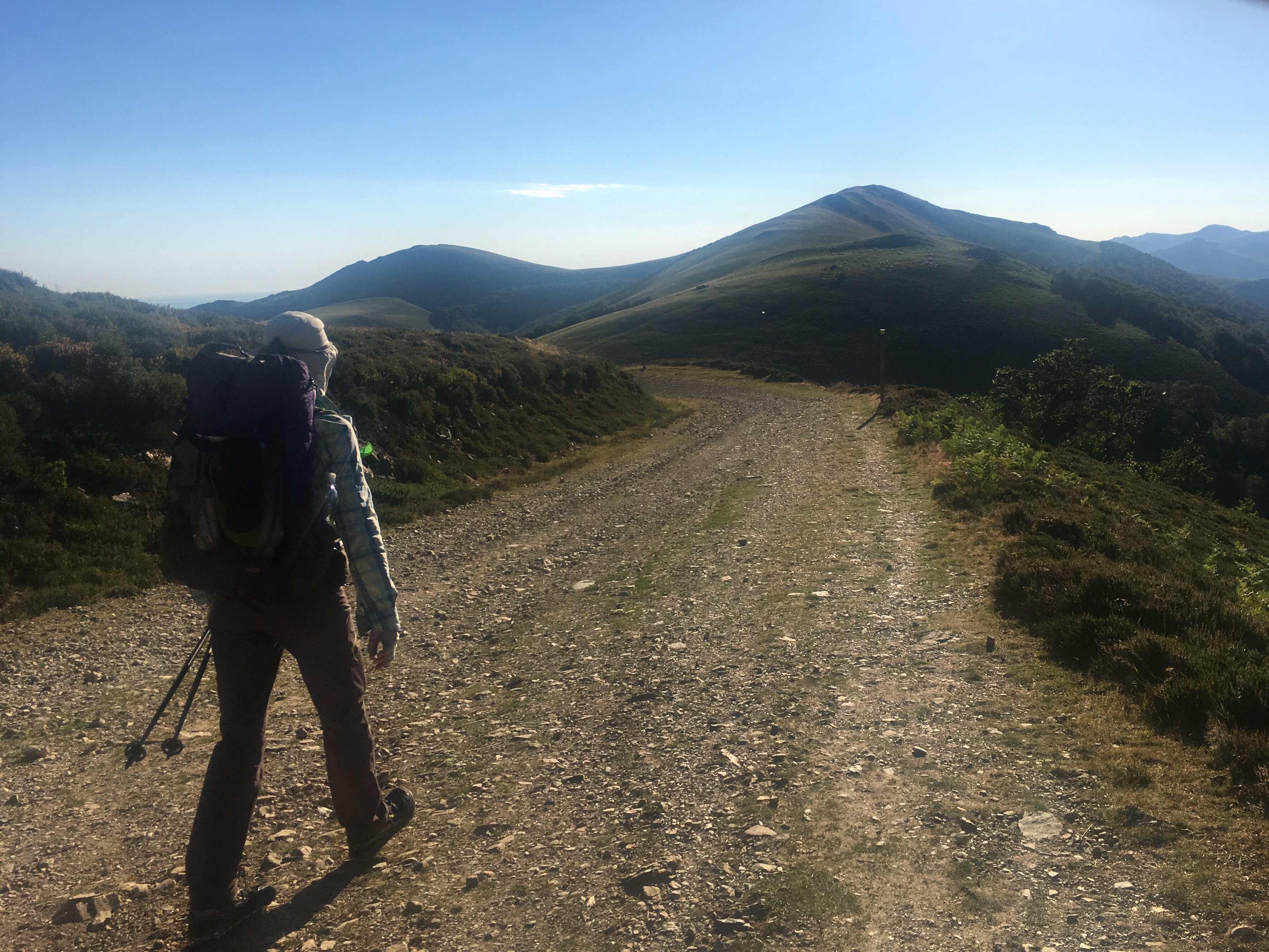 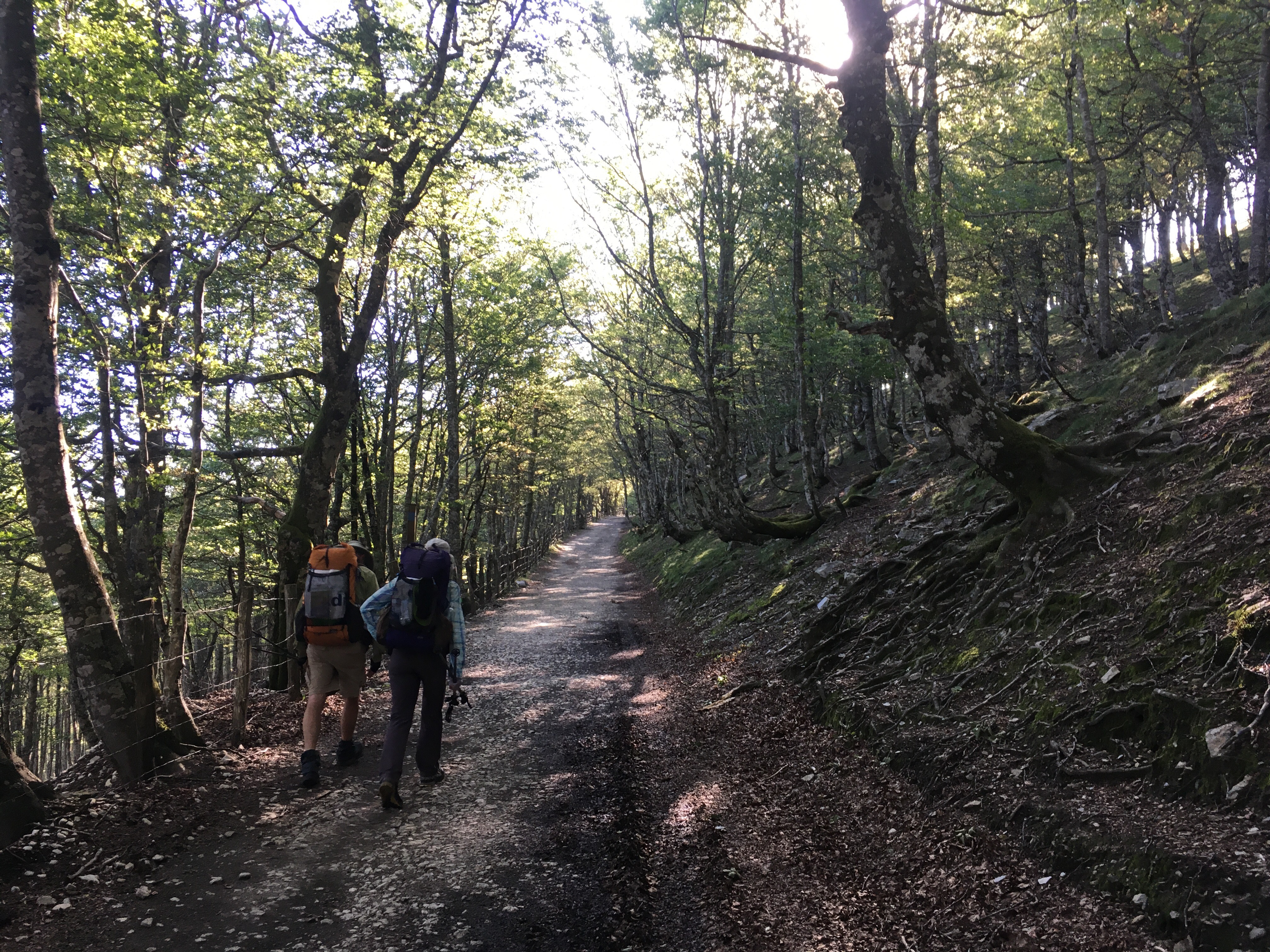 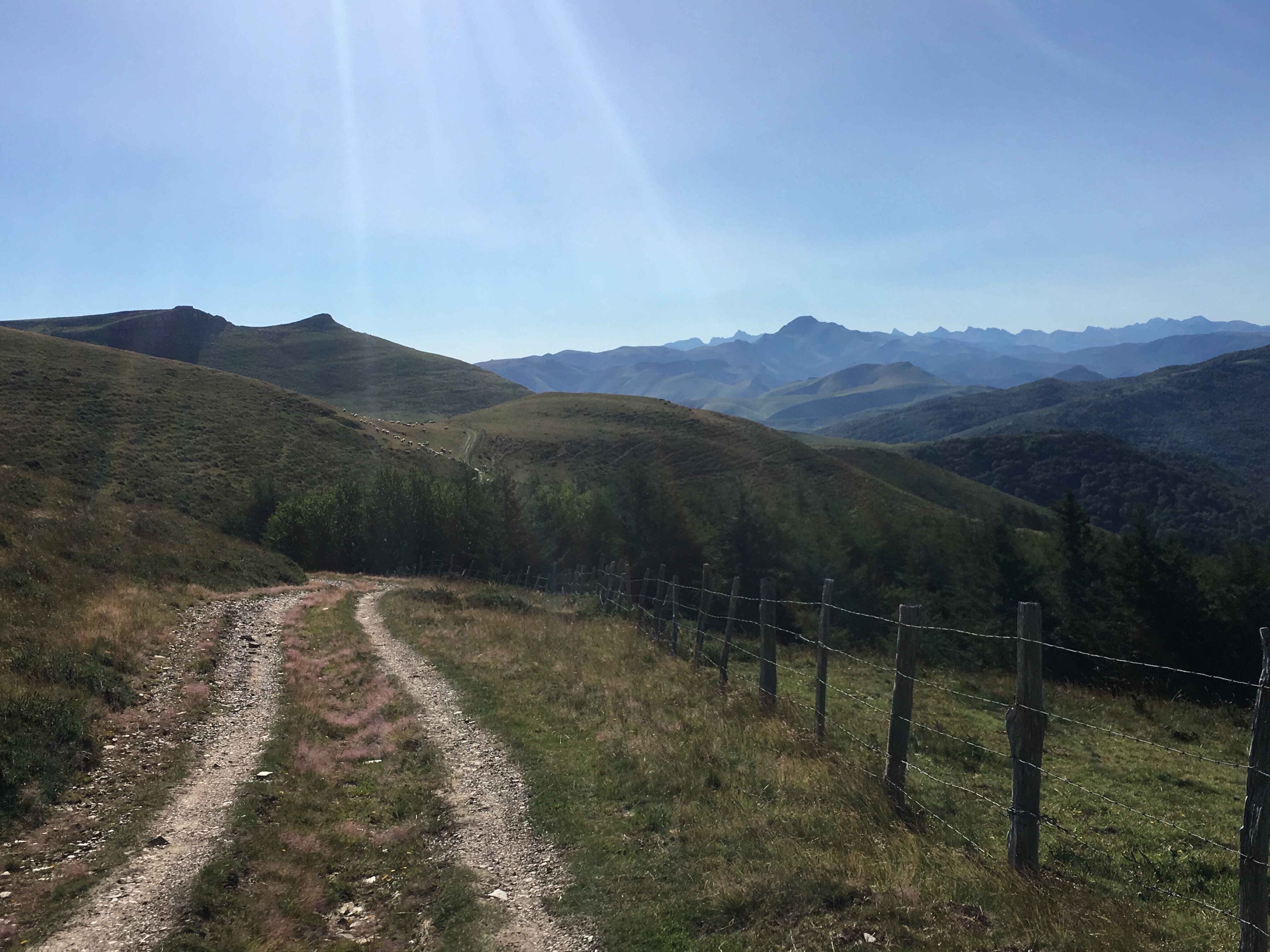 We overlapped with the Camino de Santiago momentarily when we went a bit off route to get water at a fountain. While we were at the fountain, a man walked up and said, “ça va!?” Why Not and Jim didn’t know what he said, but that was the first phrase I learned on my very first Coffee Break French lesson yesterday one the road walk. He was asking “How are you!?” I was so proud that I was able to respond “ça va trés bien!” I got a high five for my efforts and that was the highlight of my day. I don’t know how much time I’ll get to do more lessons, but I do wish I knew more.

We took a late morning break, and I mentioned that my sleeping pad kept deflating overnight. Jim had a great idea, and suggested that we should blow it up and put it in the trough that was nearby to see where the leak was. After trying for a few minutes, just as I was about to give up, we saw the air bubbles and found the leak! It was on the seam near the feet. I was happy that at least it wasn’t my fault for popping it on the bottom somehow. I’ve only gotten a hole one other time on a NeoAir, and that was early on when I first started hiking and probably just wasn’t being careful enough. The problem with a leak on the seam is that it doesn’t patch as easily. I have put Tenacious Tape on it tonight and we’ll see how that holds for now before I take other measures like a seam sealer or getting a replacement, which I heard they honor under warranty if it is a seam split. Good thinking Jim! 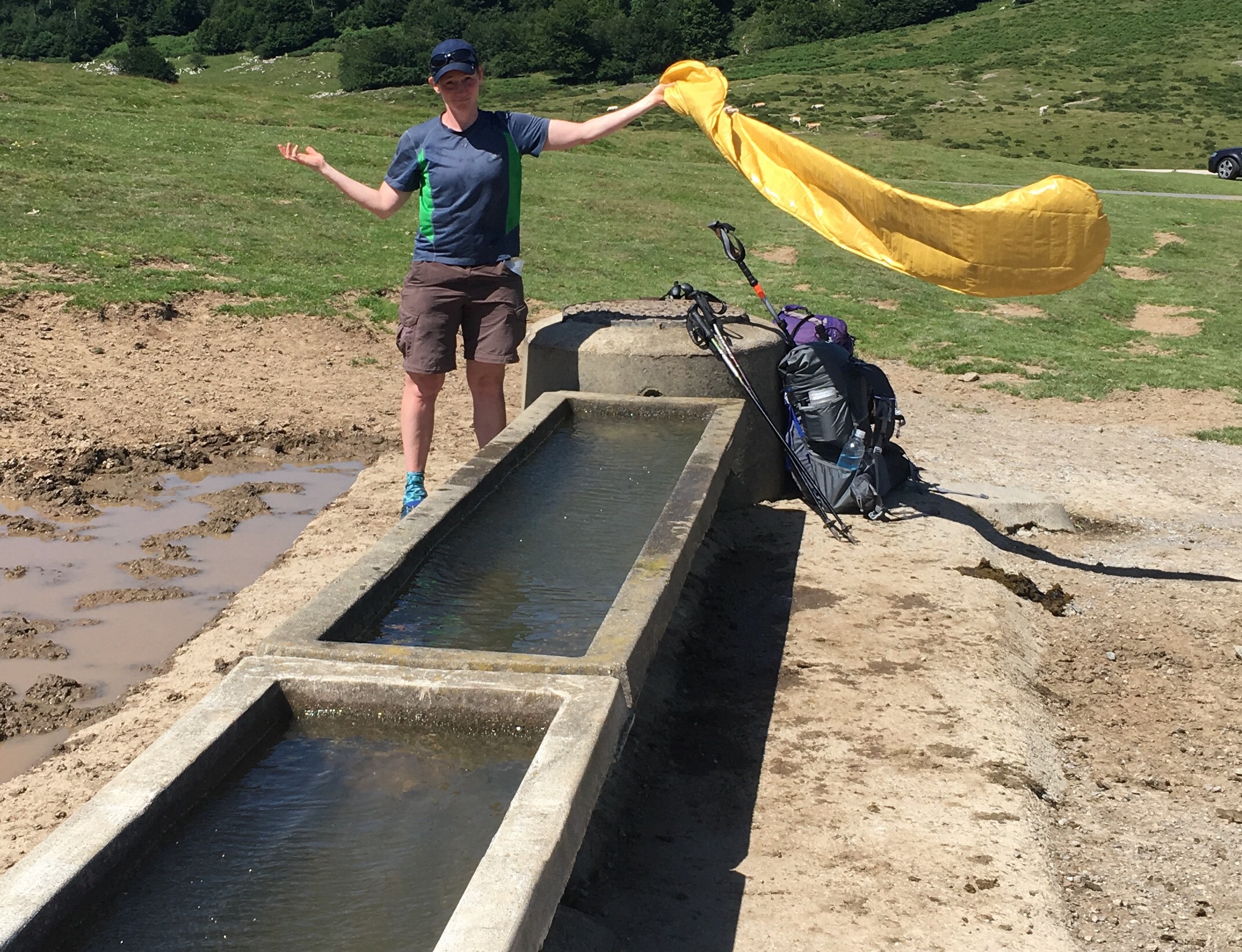 Notice now windy it was too.

The road walk to our next task was quite scenic. 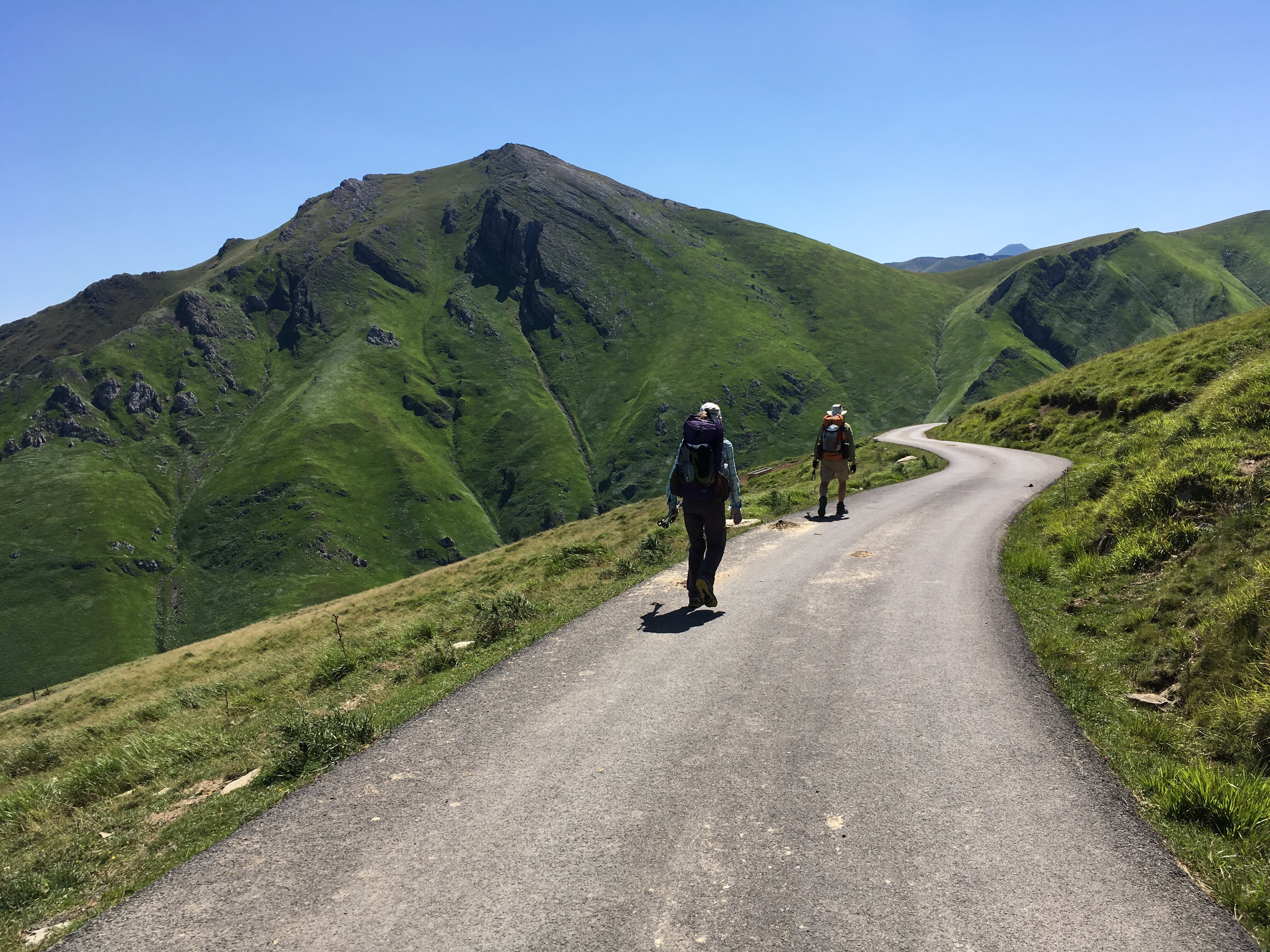 Just as the 90F/ 32C heat was setting in, the route came off the road to go down a steep grassy slope to a ravine where we crossed a stream on a dilapidated bridge. It was our last shaded spot for a while before a big climb back up another grassy slope, so we had lunch under a tree by the Chubigna bridge. Good call! 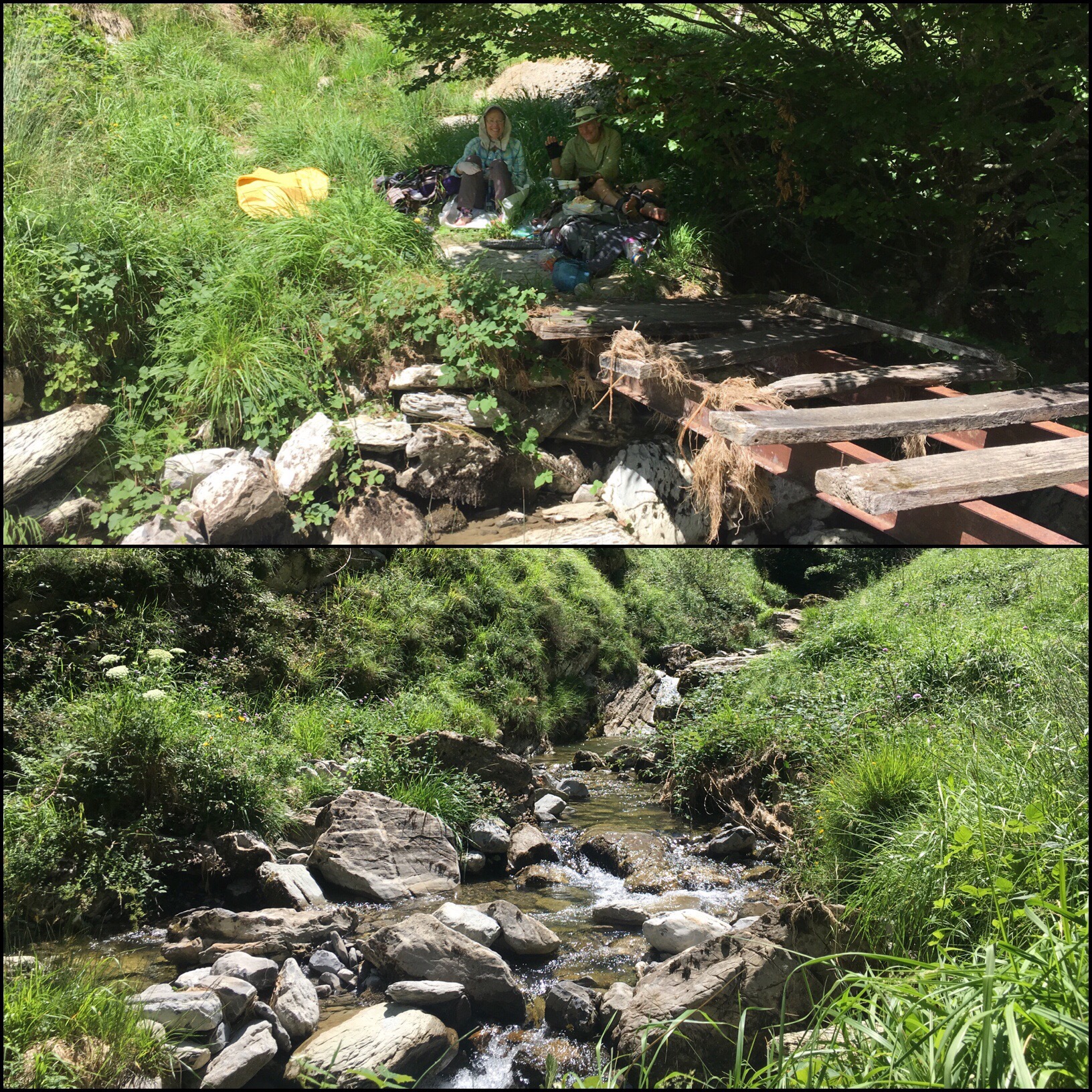 We saw a few others day hiking in the area this morning and wondered what made this area so special that we were routed this way, but no one spoke enough English for an in depth conversation. It was such a hot day to be out, and didn’t seem to be a unique destination, so we were curious. Overall, today was disappointing for this route. The idea of walking off a well developed route (we were on the GR11 a bit this morning) onto roads to then go up and down many steep draining things, to then be back on the GR10 on the other side of the range had us questioning the reasoning of it all. Is it just to be different? We wonder if we are seeing and experiencing things that are much better than the well formed routes. Usually the effort to do high/haute routes are worth it to be in stunning scenery with much fewer people. There are definitely fewer people, but we aren’t too sure about the value of the experience other than draining us. However, it is also quite hot, so that is also impacting the experience. We wondered if maybe this was a greatly historic area as well. There is no elaboration in the guidebook on that. Just some thoughts we all have after the last two days that seemed to take us through some difficult stuff just to be different. If we were on the GR11 or GR10, we wonder if we’d have such long road walks and so many ups and downs that don’t seem to lead to anything unique. Again, this first week is just the warm-up, and we will hit the big mountains soon. 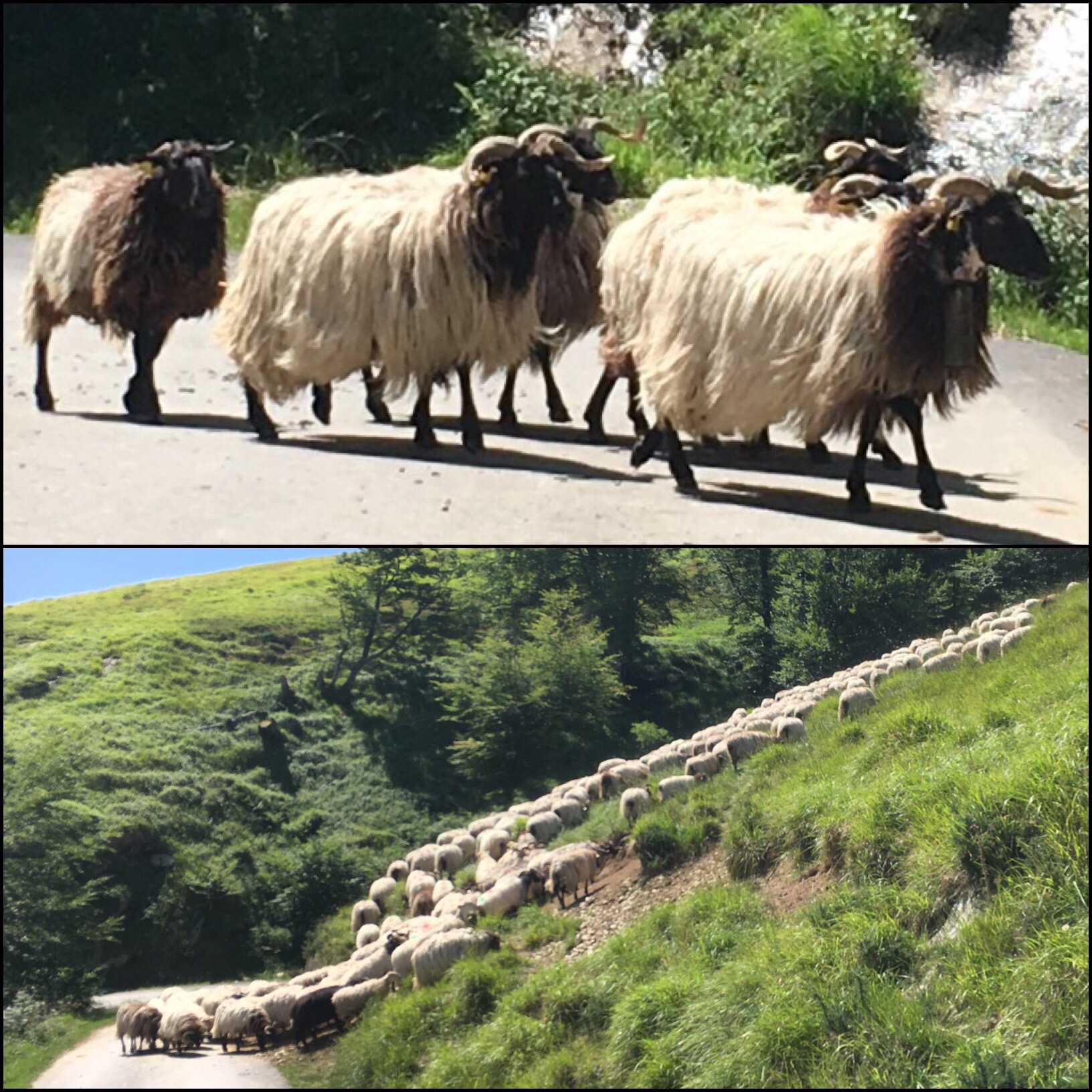 The climb up to Col d’Errozaté wasn’t as bad as we had thought it would be, but was still very tiring in the heat. 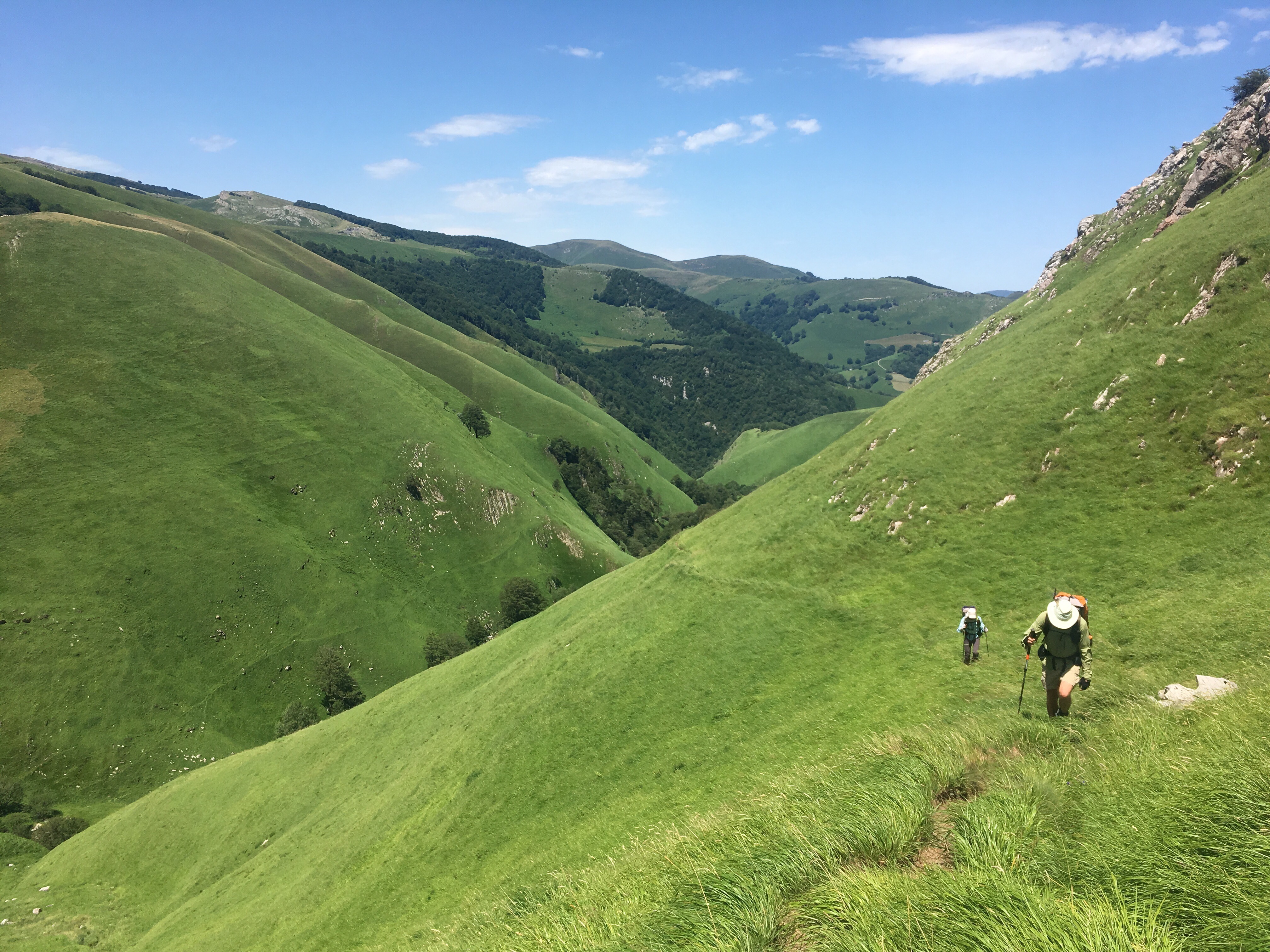 Once we got to the top, of course we needed to go right back down again. There was an option to go along a stream, which we did for a bit, but the much simpler, and less draining option was the road right next to it. At least then we could look up as we walked and take in the surroundings. I used my umbrella as much as I could on opportunities like that. 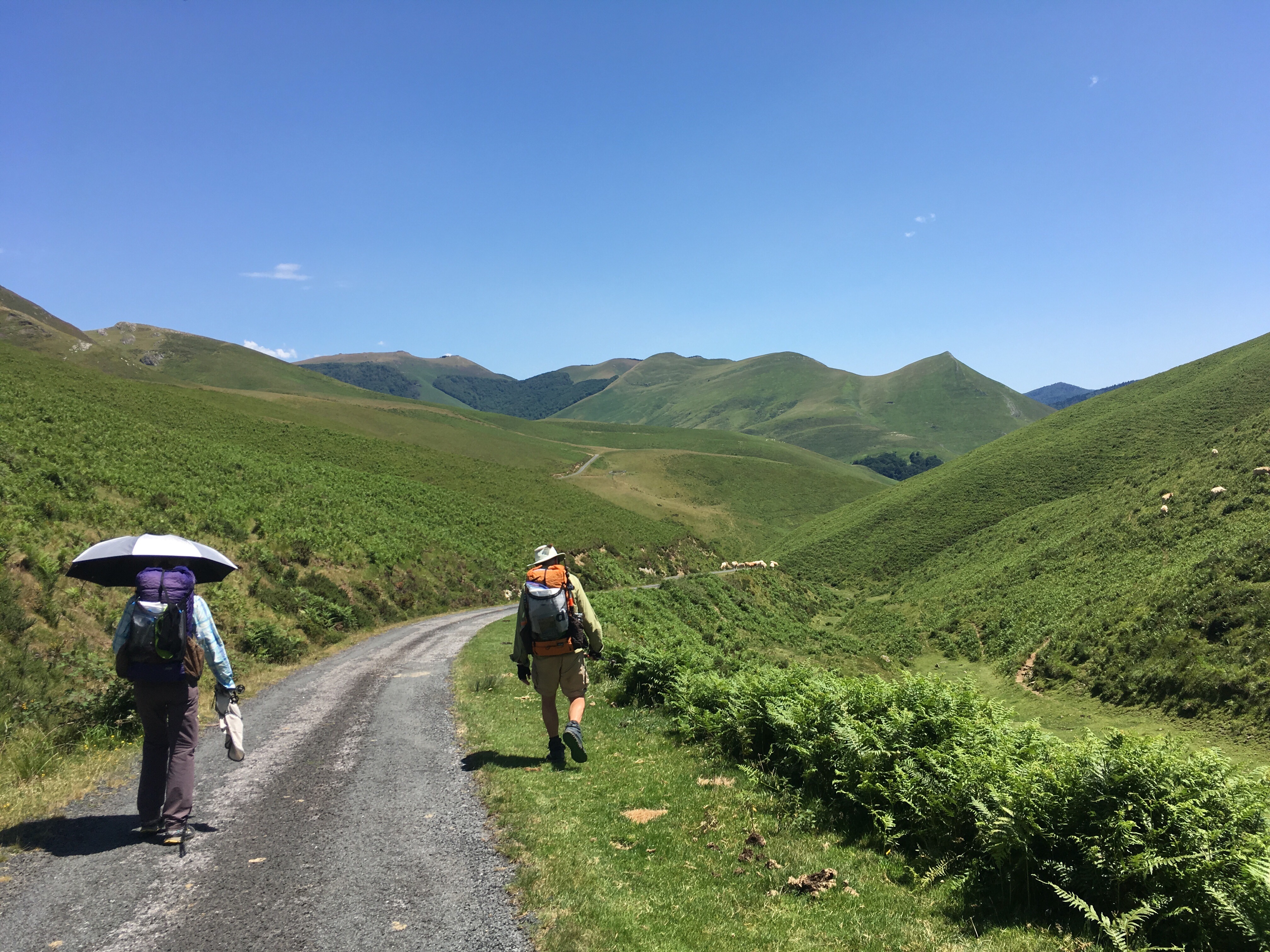 Soon, we reached the end of this section in the book. For anyone following the daily schedule of the book, know that when you reach border stone 224, it’s quite full of cows and I would not have enjoyed camping there. I suggest one of many cute bivy spots along the steam before the border stone. Lots of horses in the area though. Know that it will not be until Chalet Pedro 3-4 hours later that you will get water.

Moving on, we had the nail in the coffin for our day. We needed to go up a steep grassy unmarked hillside to Urculu Ridge. 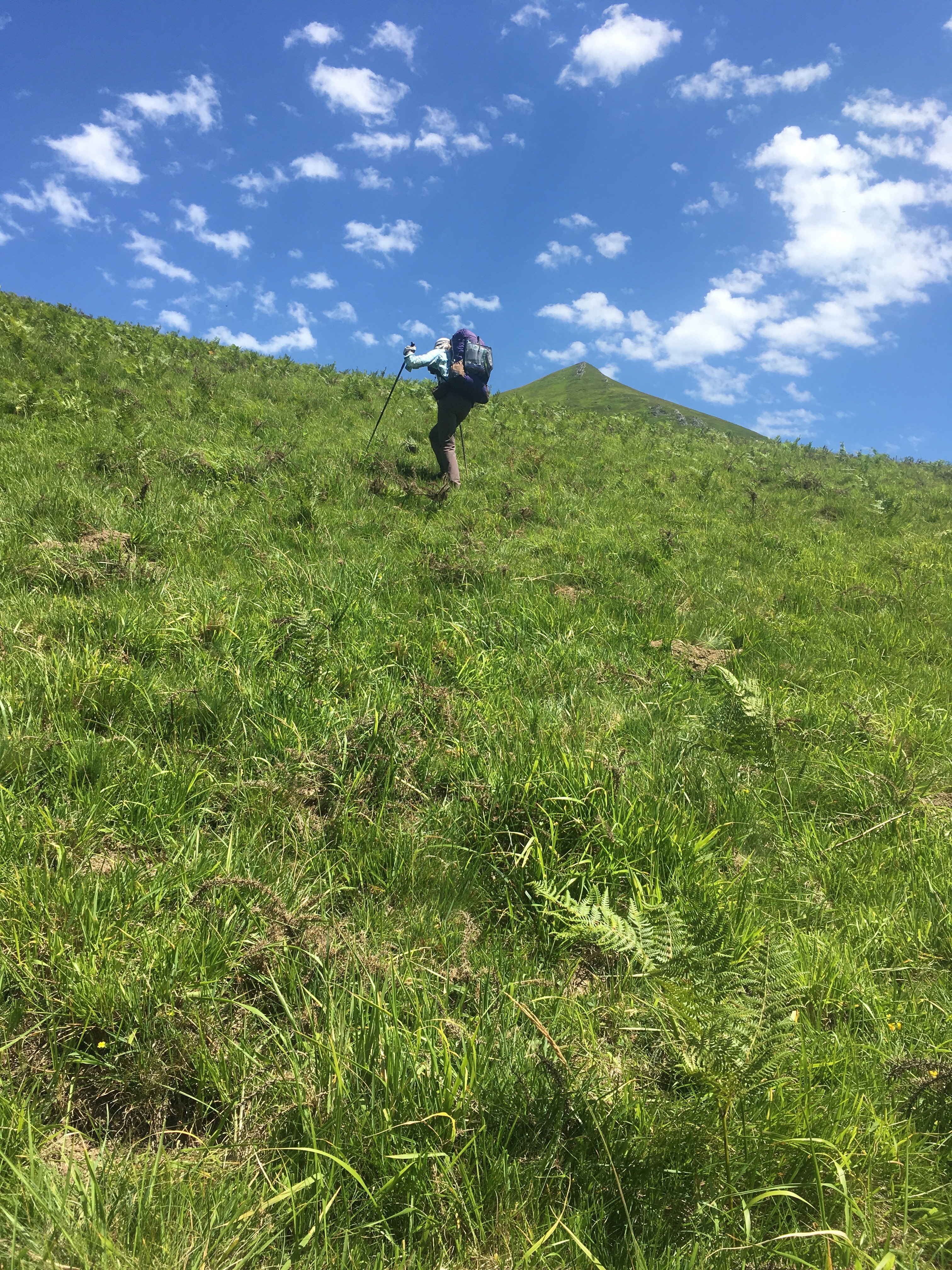 We did that fine, but once up there, we failed to find the red-white posts that are quite short, to put us on a good path to traverse. If you have Amy and Jim’s track, which many use, know that they found a cow trail too low. Go much higher, almost to the top of the climb, and make the effort to find the marked trail. I think we took probably 45mins longer and lost a lot of energy doing this section because we took a path that was too low that disappeared. At the end, we found the red-white markers, so they must have been there all along way up high. That exhausted all of us with pretty intense heat late in the afternoon. 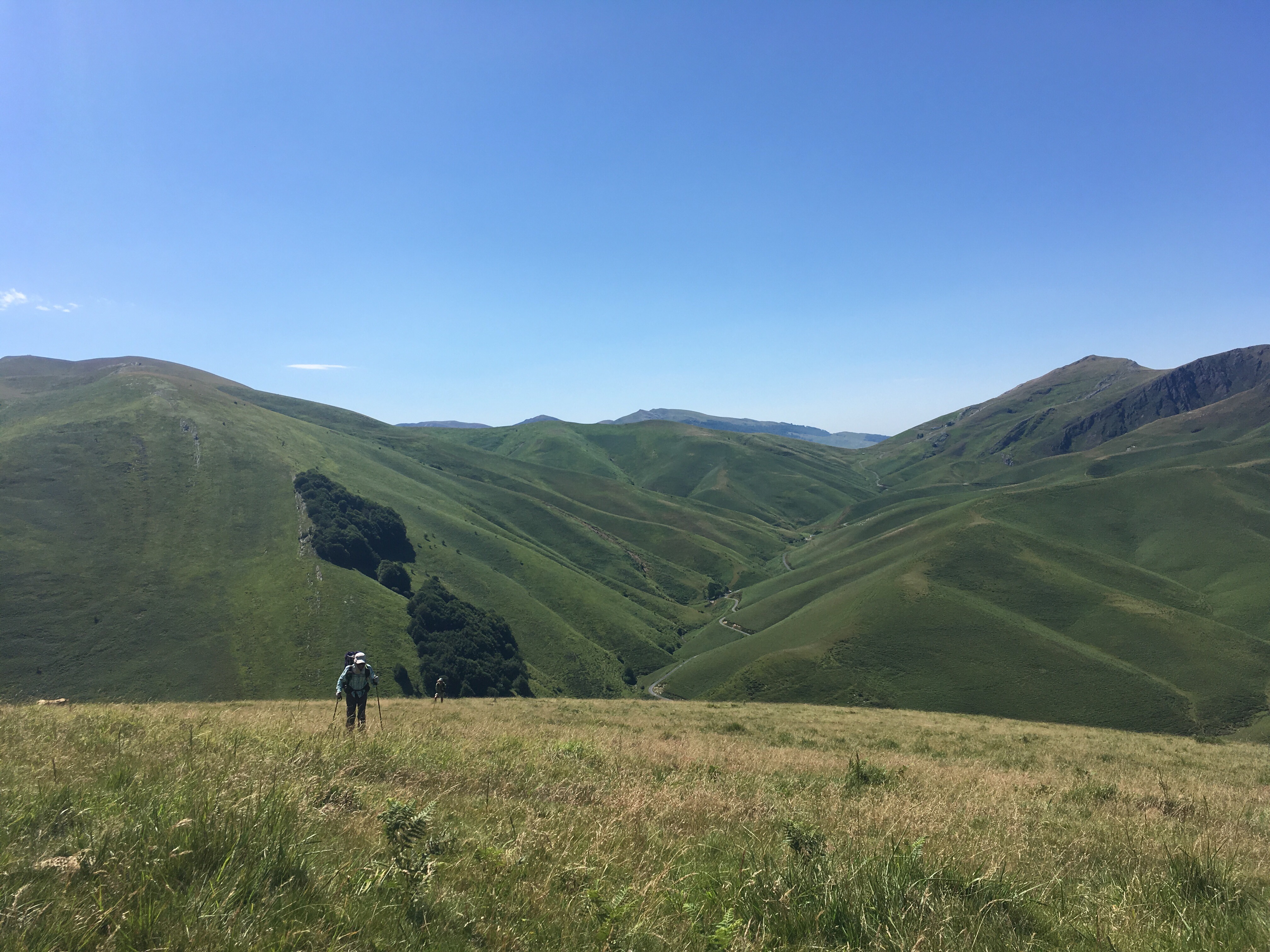 The climb up and the point we were at just hours earlier in the background. We came down that valley. 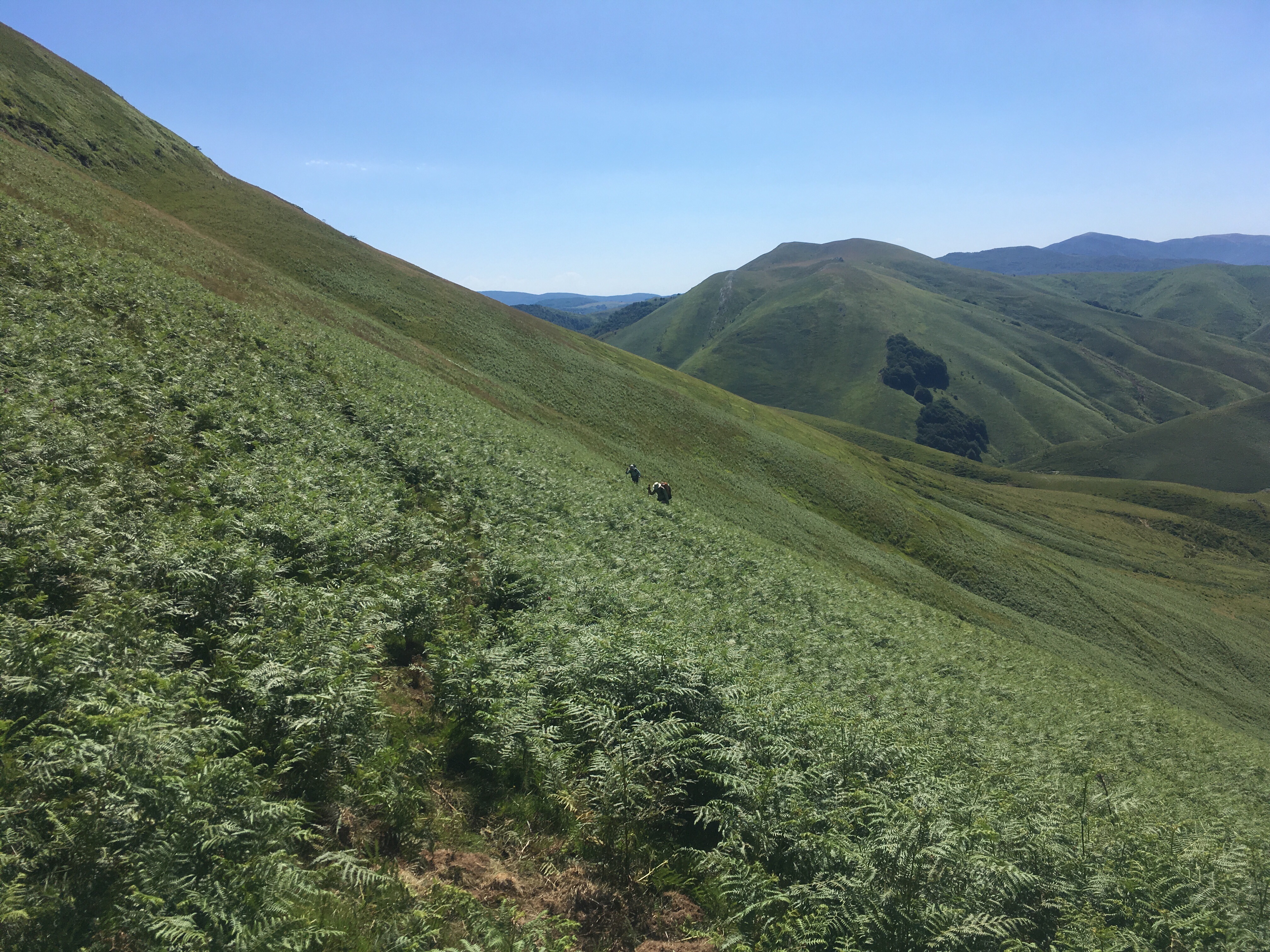 Not where we should be. Should’ve traversed up near the top.

Finally, we had some wooded walking and dove downhill again to reach Chalet Pedro (D 18 in the guidebook). Why Not and Jim had looked forward to dinner there all day, but when we arrived at 7:30pm, it was closed. Others were there staying at the chalet and said it was just open 30mins prior. It’s tough out here because there aren’t set hours and people kinda just open restaurants when it’s convenient for them. After two tough days, Why Not and Jim were also wanting to get a room to be able to shower and relax more, but the owners were nowhere to be found. Bummer. 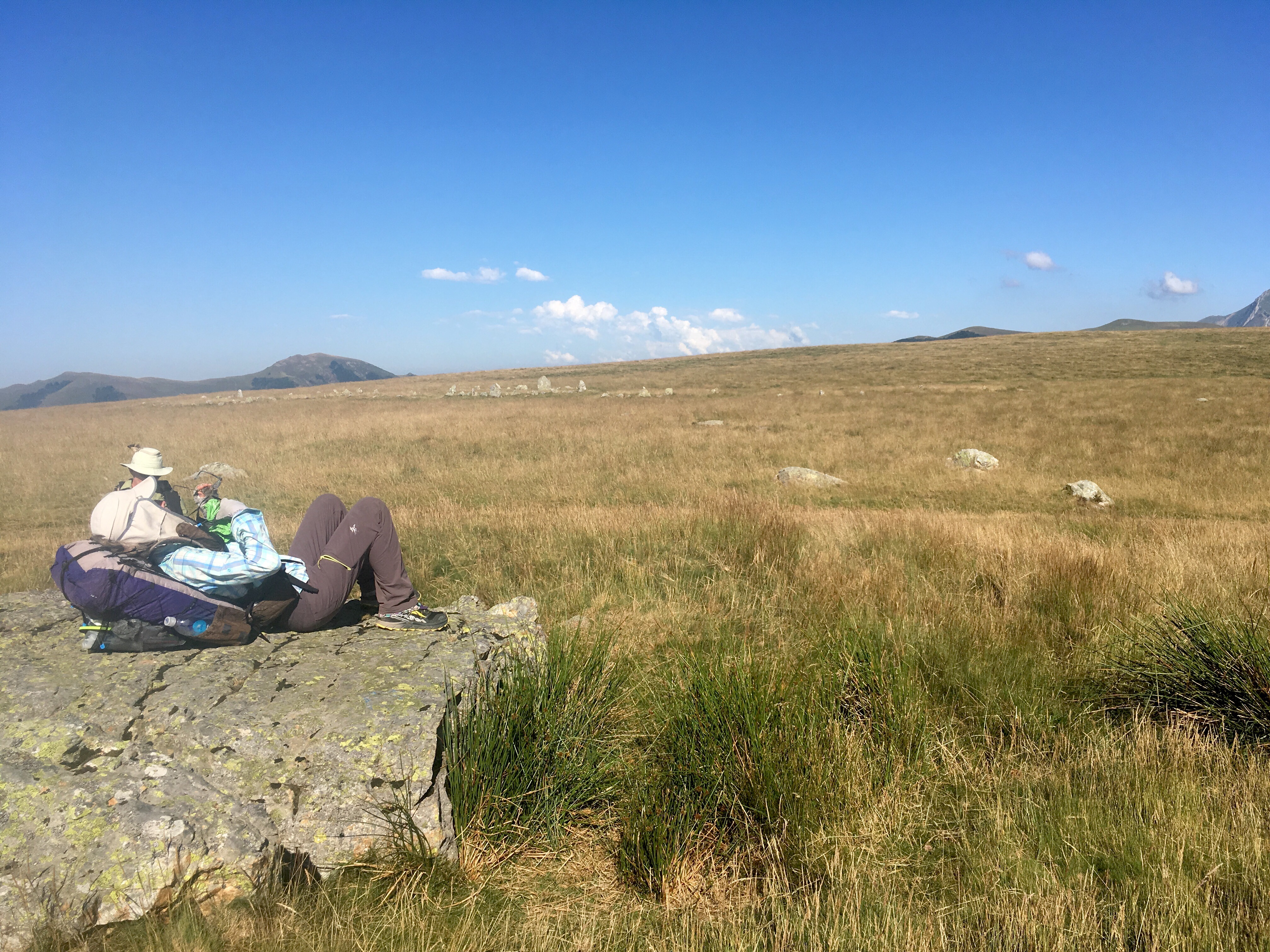 A break up top before a long descent. 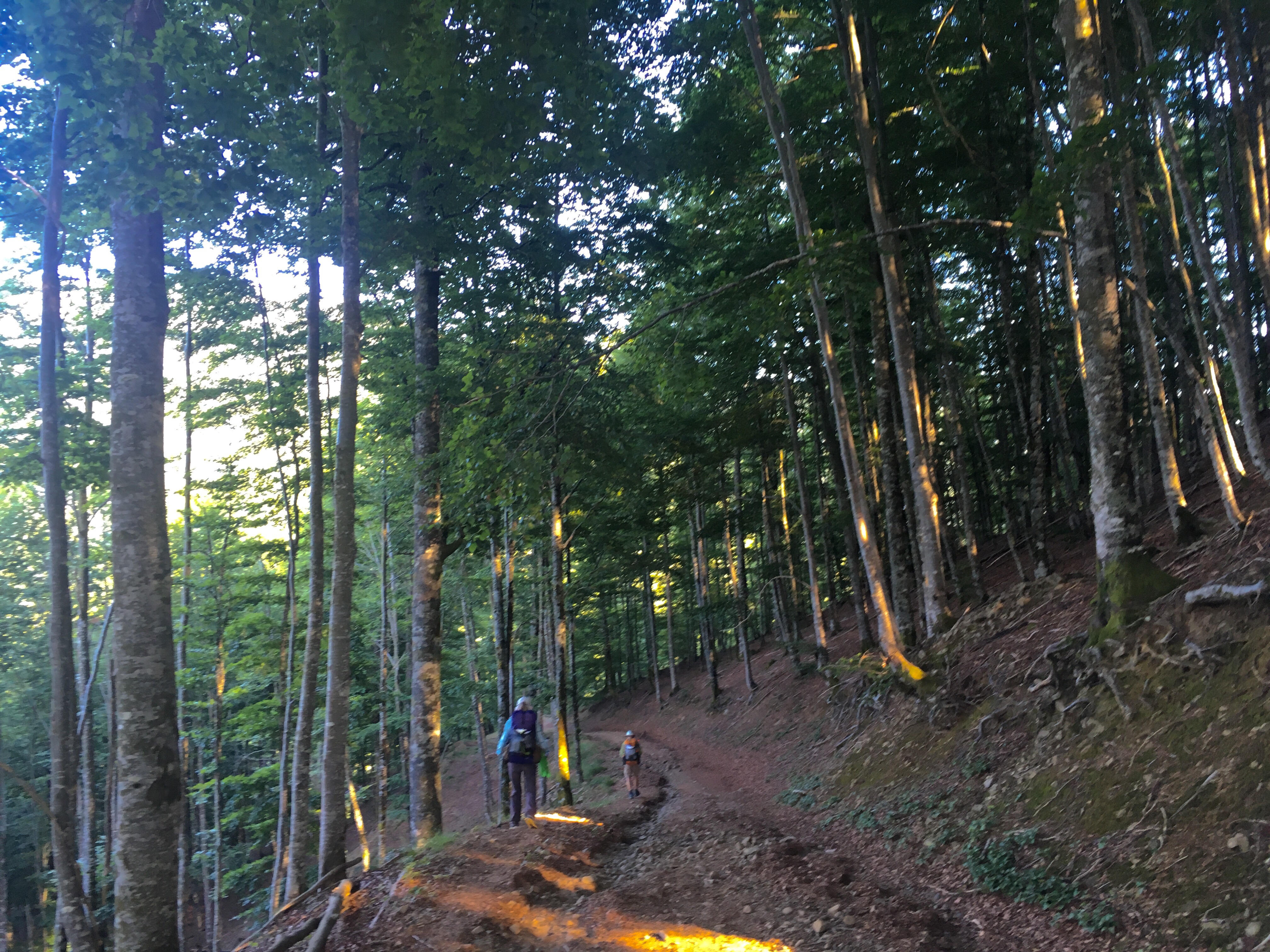 I hadn’t planned on eating or staying there, so it wasn’t a let down for me. I think my strategy will be to not count on these small places being open at all. It’s also a bit early for summer here, so I think it’s just kicking in. We are camped in the woods near the chalet with a nice stream. I’m camped closer down by the stream (I love the white noise of a stream) and Why Not and Jim are just up the hill. (Note: The next morning, just 1km further down the road on the route, there is open camping for tenters  caravans. There was also a nice bathroom with showers that seemed all free across the street. Only problem was that cows with bells seemed to be wandering the camping area that morning). 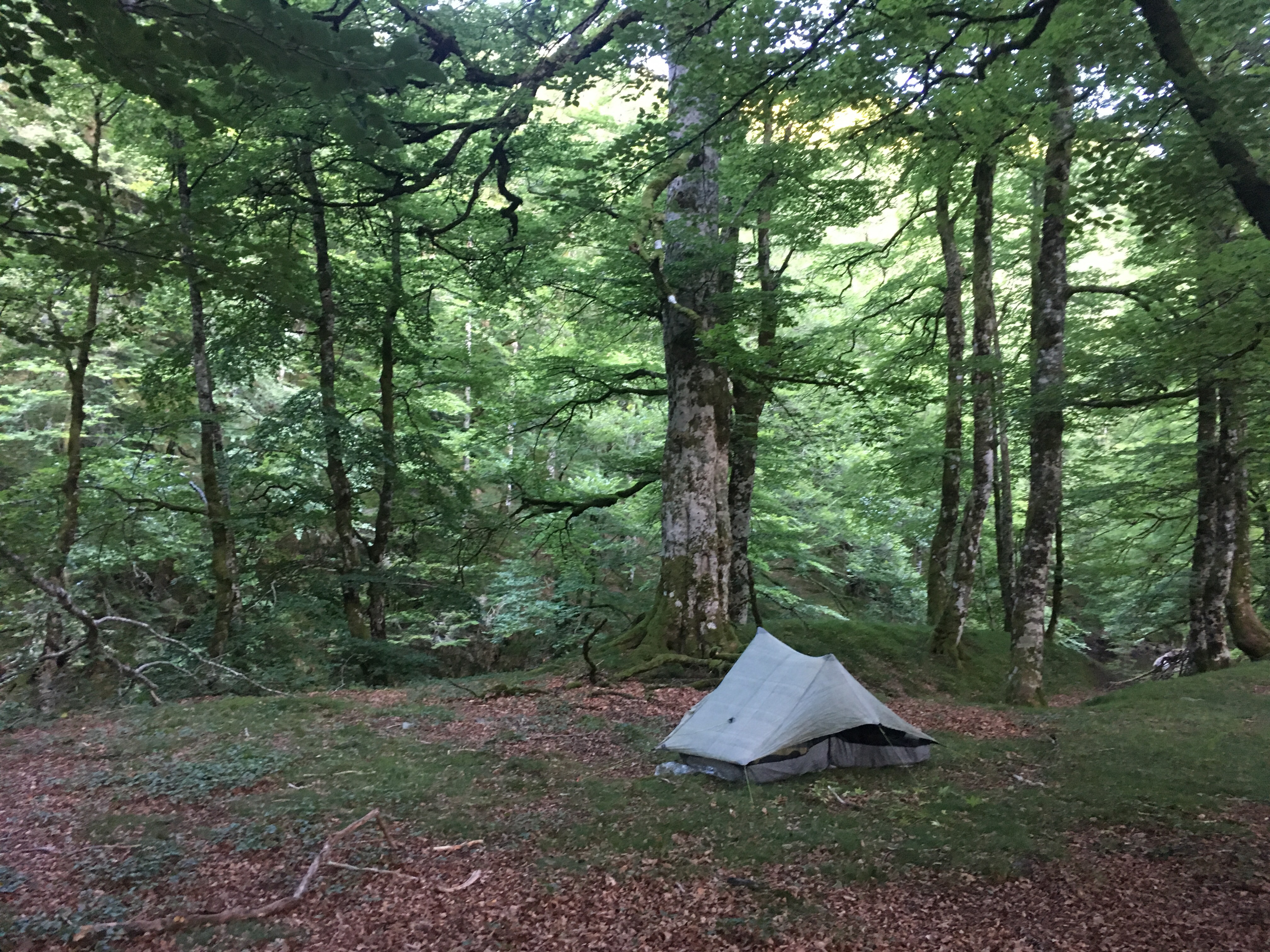 It should cool off tomorrow and actually get really cool in a few days. To let you know the fun of hiking in heat, I did get a heat rash today, which is common for me until my body adjusts to being in heat again. 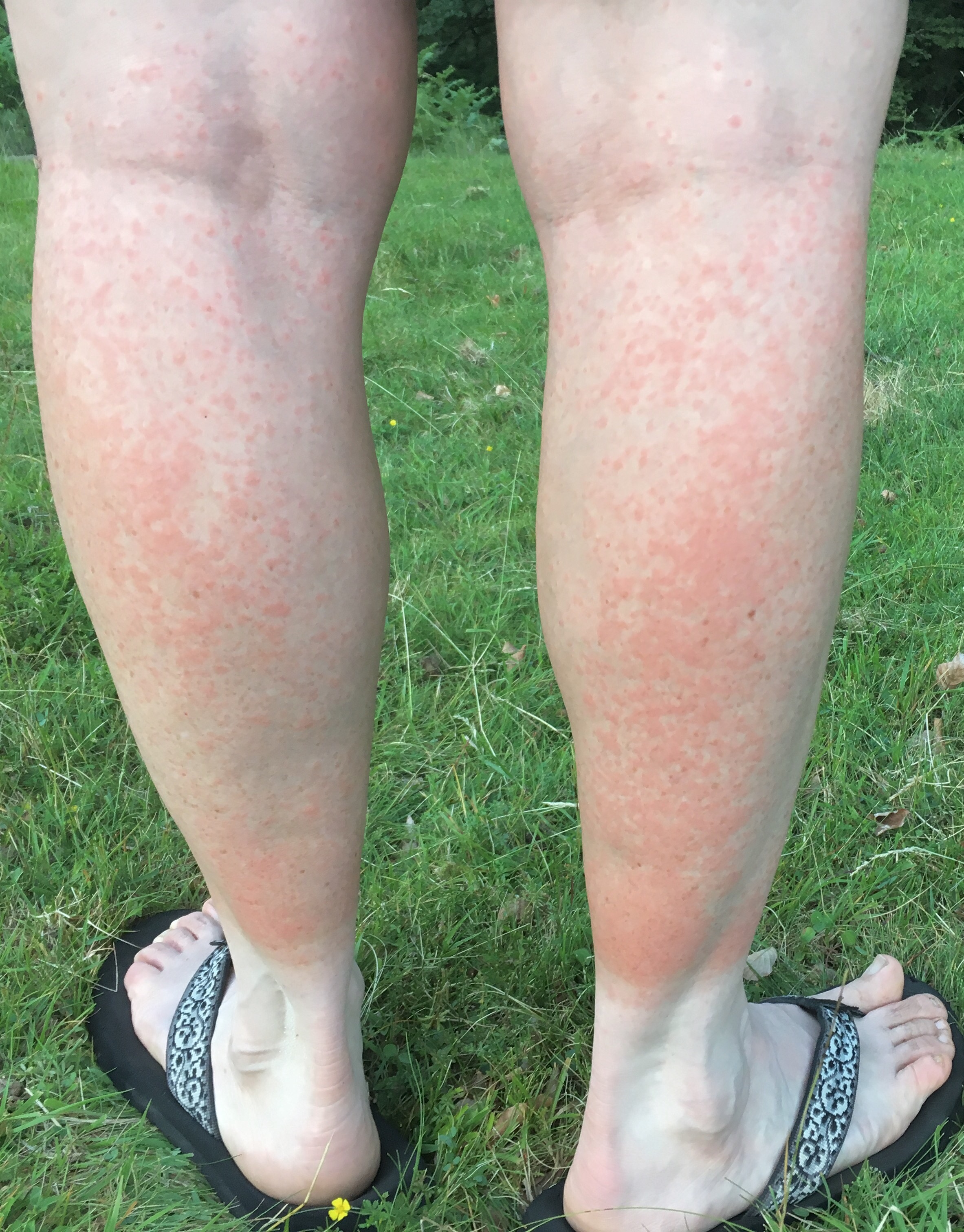 I’ve gotten them each summer since I was a kid. Thankfully not on my feet yet. That’s the one that really sucks. It’s not as bad as it looks. It will die down overnight and I just have to remember not to scratch it cause that burns. I’m looking forward to a day that isn’t as hot tomorrow.