July 6th
Chalet Pedro/D 18-Near Cabane d‘Ardaneé
Campsite Elevation: 4374ft/1333m
*No mileage available. The guidebook listdistances on the route by time rather than miles.

My sleeping pad is fixed! I had a glorious night of sleep in the woods near a stream. Tenacious tape is magic and seems to be holding great. We’ll see if it holds for the long run. I am liking my later starts and got going at 8:10am this morning. I’ve been waking up with the sun around 5:30am, but I’ve been taking the morning to sleep a bit more, finish up blogging, and organize the beta for the upcoming day. I started this later start strategy in Tasmania, and have taken to it. I blame Griggs, ha! The goal this summer would be more of an 8am-6pm hiking day, if I can control it. I’ve been enjoying more down time and am embracing shorter hiking days than I’ve done in the past. Today, the timing worked out perfectly, and I’m hopeful to continue this new routine. Either my body is getting older, or I’m finally learning to calm down a bit, ha!

I left about an hour after Why Not and Jim. We tend to do the same daily distances out here, but have different routines, so it works out for us to each do our own thing, and we tend to leapfrog or overlap depending on the timing. This morning started out overcast and thankfully not as hot. Still plenty warm and humid for a morning. 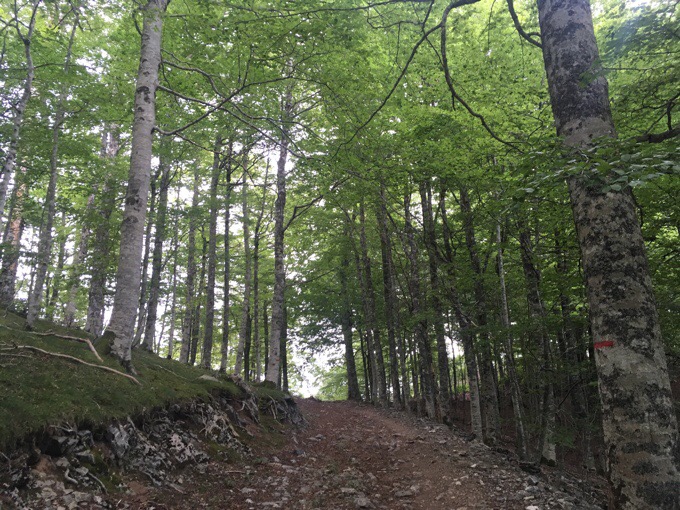 After some dirt and paved road walking for almost two hours, the route went by more chalets and a restaurant at Col Bagargui. Why Not and Jim were having coffee and planning the day’s strategy when I arrived. The main concern for the day was water. The guidebook and previous hikers make it seem like a very dry day with no water sources after the first hour or so. There was a mention of a man made water reservoir, but there was no indication of if it was accessible. We all decided to carry all our water for the day just to be careful. Thankfully, it was not hot and sunny like yesterday.

Not sure how long it would take, I set off while WN&J finished up at the restaurant. It was a grand day! The big event of the day was a long traverse then climb on a ridge that led to the peak of Pic d’Orhy, our first climb over 2000m/6562ft. The views great. 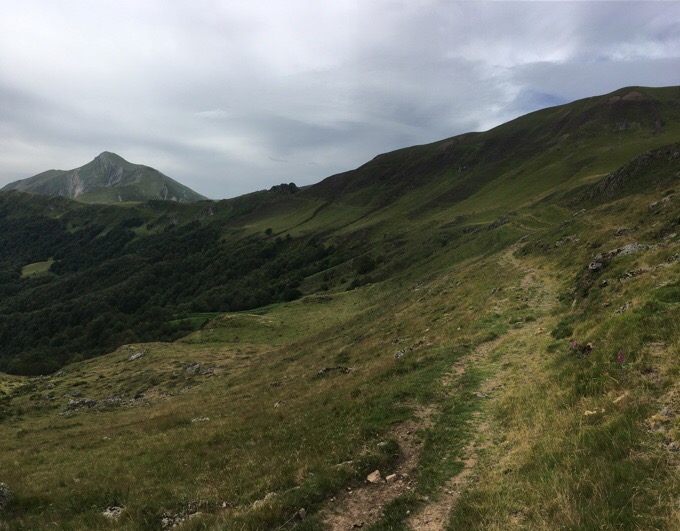 Long traverse before getting on the ridge. 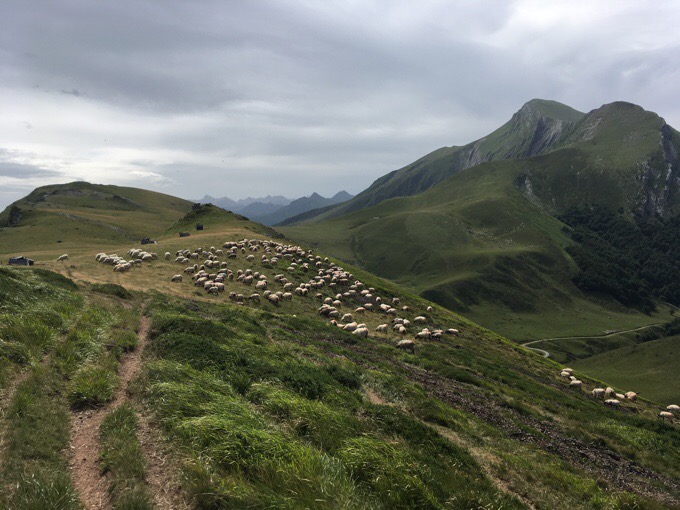 Pic d’Orhy is highpoint in the distance.

At one point, there were a ton of vultures circling and diving down to something that must have been quite the meal. I couldn’t get close enough to figure out what it was. I took a video that hopefully embeds well here. I didn’t stay too long as I didn’t want to get mistaken for whatever they were devouring. 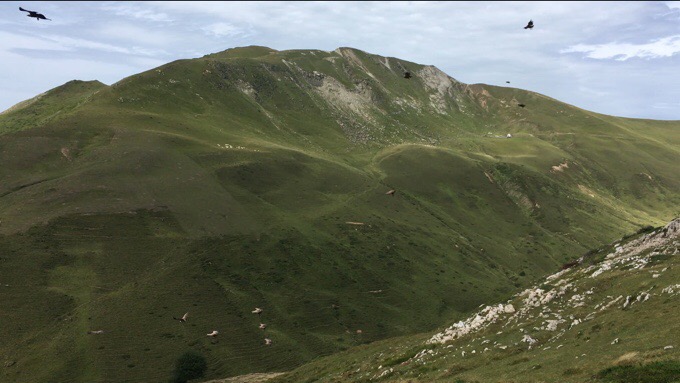 The wind today was really strong. It was like hiking with a jet engine blowing at your side. Seriously, standing up took at lot of effort, and it made the ridge walk worrisome, so I made sure to stay just low enough off the ridge that a strong gust wouldn’t push me down the other side. This climb was the best so far. 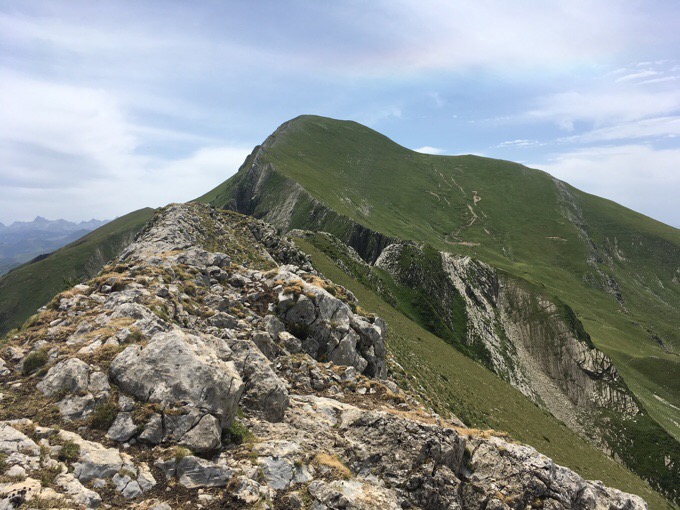 The only thing I didn’t like was one section going steeply down loose rocks. Yep, I was butt scooting some of that one just to be careful. I took lunch there since it dropped to the side of the ridge to block the wind. I named that spot Sheep’s Toilet cause droppings were everywhere. Even when I cleared a spot for my sit pad, I know I was on piss that wasn’t too old. The smell was not good. 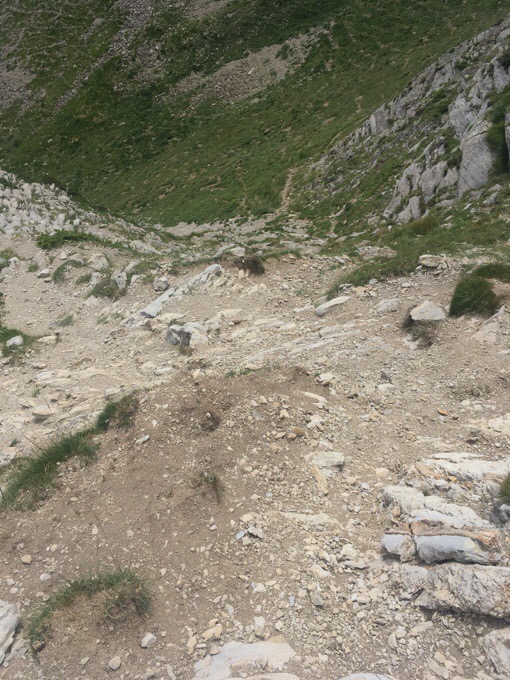 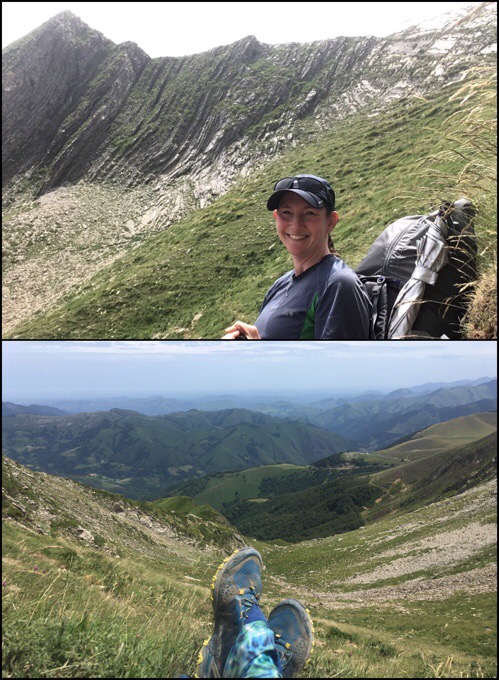 Lunch at “Sheep’s Toilet.” The view made up for the smell.

After lunch, as I was headed back up to the ridge, WN&J caught up. They let me know I’d left something at the restaurant when I repacked my pack for possible rain. It was the guidebook, argh! I am a moron! Good news is that I know I’m prone to losing things, so I have a digital copy on my phone as well. I had today’s pages in my pocket, so I had no idea it was missing. It had fallen near WN’s pack and I just missed it. I felt really bad WN had to lug that extra weight a few hours up a tough climb. What they didn’t know was that also in that bag was my passport! Yep, terrible, I know! It’s usually the deepest thing in my pack and only comes out while I’m in my tent gathering pages for the next day. I figured I’d never lose that! 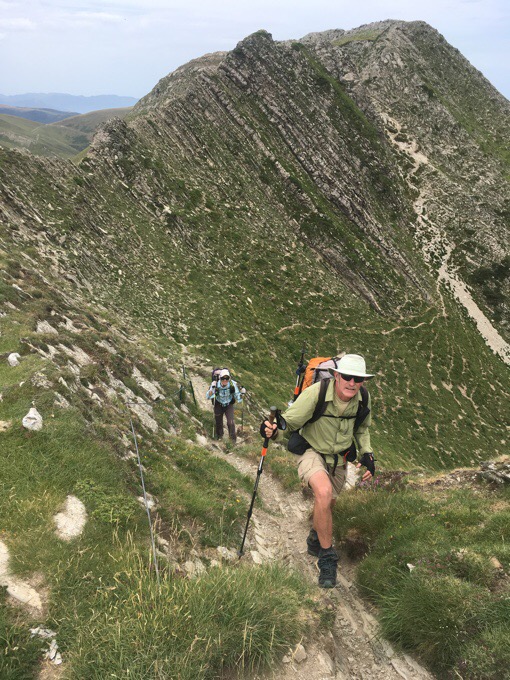 We all hiked the rest of the day together. The climb to Pic d’Orhy was great. Still really windy, but great! 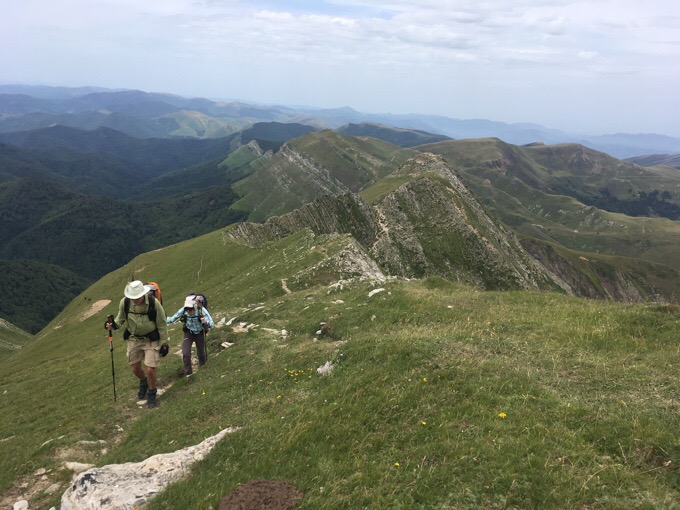 Fortunately, it’s a popular climb, so someone was up there to take our photo. Notice all our hats on funny and tightly due to the crazy wind. WN found her bonnet method very useful, haha. I almost used my buff to hold my hat on and to cover my ears it was so loud. 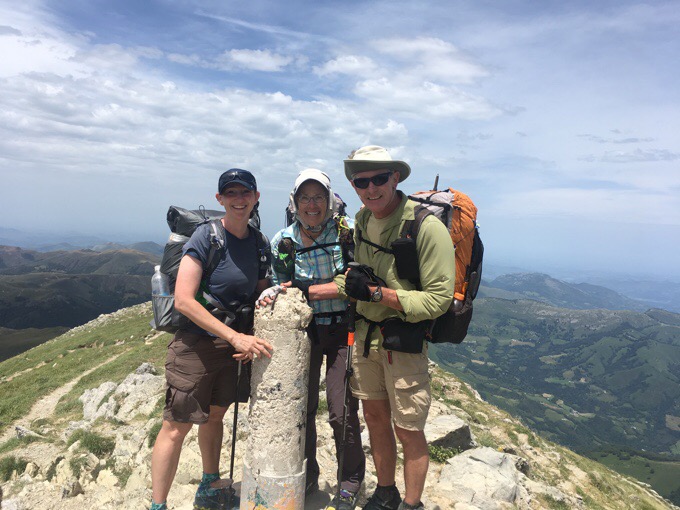 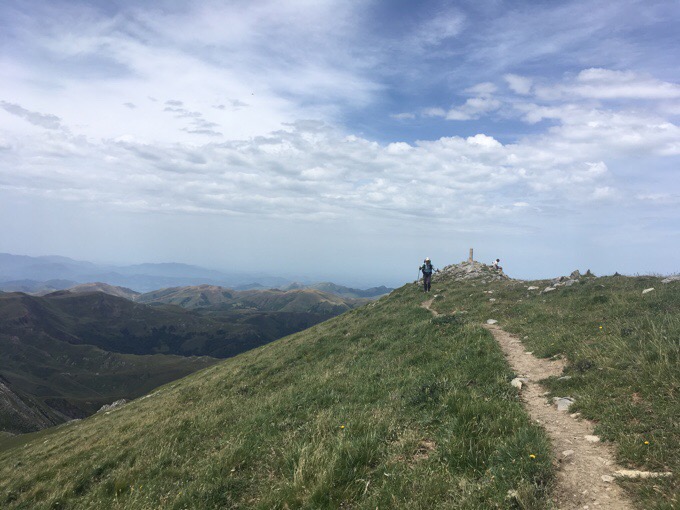 We did see the water reservoir obviously coming down the mountain, but from our distance, couldn’t tell how accessible it was. The parking lot also had many people and a caravan. I’d think you could find a way to get water from the reservoir or a person if anyone really struggled to carry a full day of water on this day. We were glad it wasn’t hot, so we drank a lot less. 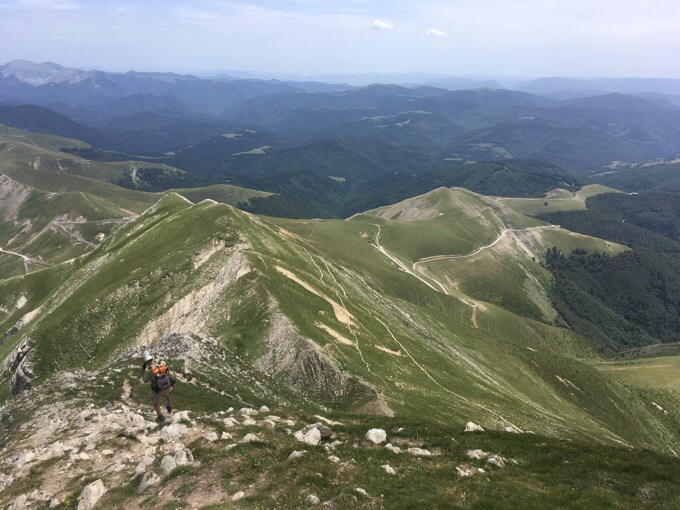 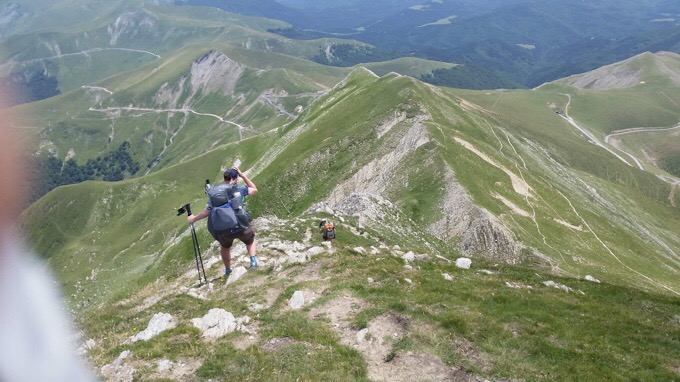 Notice me holding my hat on and Why Not’s hand in the photo trying to keep hold of her phone it was so windy.

From there was another smaller climb or a low route option along a road. In contemplating which option to take, Why Not had the quote of the day saying, “Well, my legs feel pretty good, so I may as well do something to make them feel like shit!” Spoken like the true endurance athlete she is, haha. We followed the Spain/France border up and over Betzulagagna and down to Col de Bildocharréko. These names! 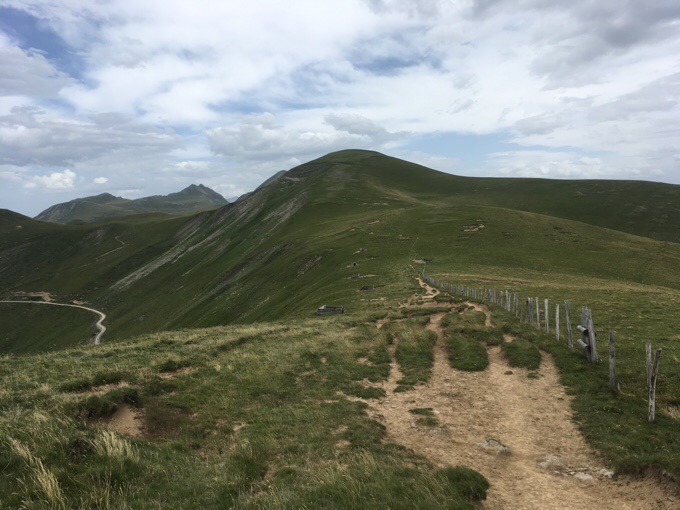 Then there was a helpful red-white trail marked as the GR12 that took us around the south side Pic de Gastarrigagna. We couldn’t tell if we needed to go over the top, but it really wasn’t necessary. From there, it was a dive down to a dirt road that took us to a sheppard’s hut where there was a spring. 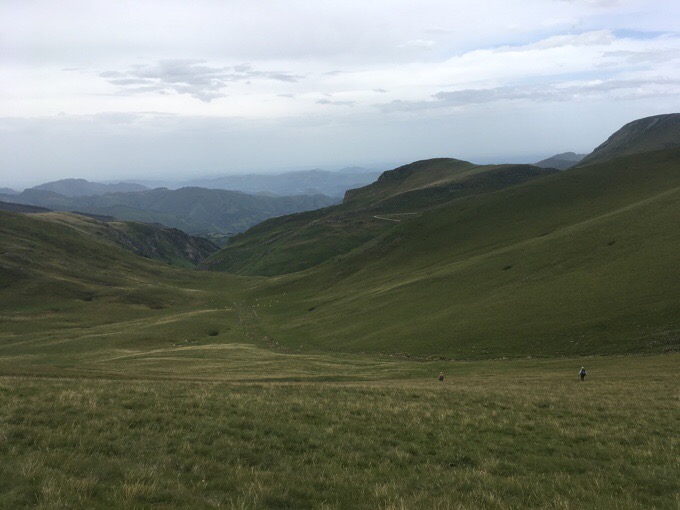 Down to the road.

This is the end of this day in the guidebook, and our best option for stopping for the night to be out of the wind, so we had our earliest finish yet at 6pm. There is a cabane (like a hut), but each one we’ve seen is full of sheep dung. We could see it was surrounded by sheep and chose to camp along the road away from them at the end of the sheppard’s driveway. 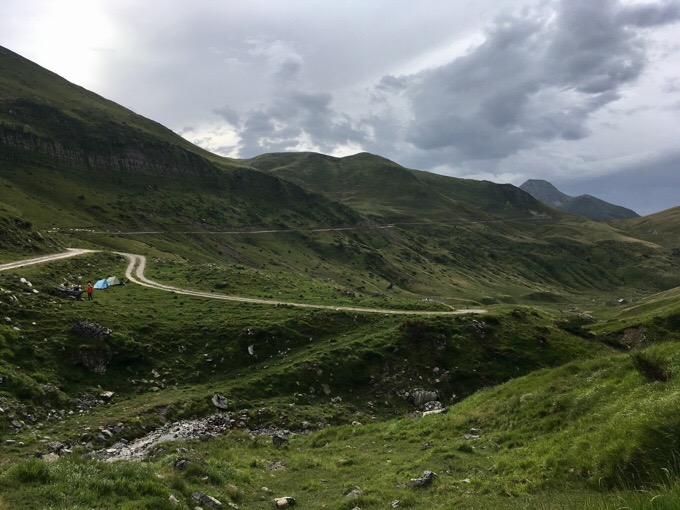 Then two experienced French and German men arrived that are far more experienced at hiking in the Pyrenees than us. They are nearing the end of a different high route all the way from the Mediterranean and chose to use the cabane. Just as we wondered how they could sleep down there with all the sheep talking and bells ringing, the full herd crossed through our camp and were driven up over the hill. It was quite the sight. Kinda like watching a train crossing for an hour. It was pretty entertaining!

Now the only sounds are some cow bells from a group grazing just up the hill, but it’s far enough away to be faded like a wind chime. As we looked at our guidebook, we noticed we weren’t going to make it to town unless we either pulled a massive day or took a short cut. Oops! We all thought we’d make it tomorrow night based off the itinerary we were gauging our miles off of from another couple (Amy and Jim) that did this a handful of years ago and made the track we’ve been using. They kept quite a pace! We’ve decided to do a relaxed day tomorrow that will set us up to walk into town the next morning. We all had enough food to stretch to make that happen and will enjoy getting to town relaxed in the morning than exhausted at night. If I’m going to pay to sleep somewhere I want to try to get 24hrs out of my time in town. Hopefully, the wind won’t kick up overnight. We’re as protected as we’re going to get here. 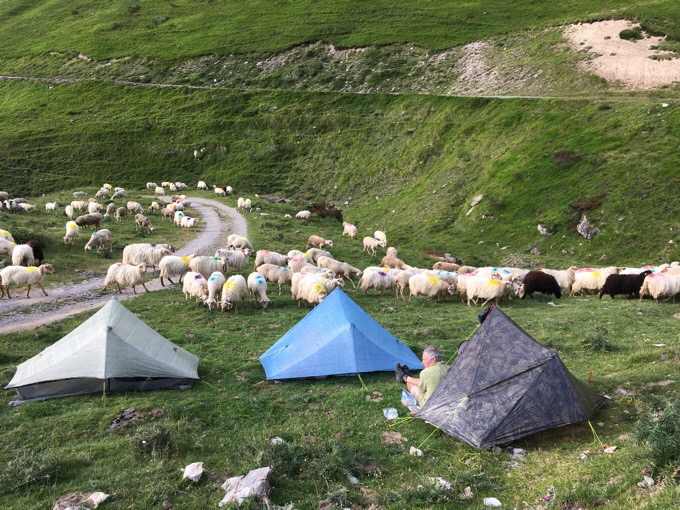