July 7th
Near Cabane d‘Ardaneé-Source of Marmitou
Campsite Elevation: 6046ft/1843m
*No mileage available. The guidebook lists distances on the route by time rather than miles.

My favorite day thus far! The scenery and terrain were pretty darn perfect. I got going at 8am about 45mins or so after Why Not and Jim. Almost the whole day followed what they call red-white paint flashes. Sometimes that can mean the GR10, GR11, GR12, or something else. It’s tough to keep track, but I’m just happy when they are there because it means easier navigation and usually a good track that leads to good scenery. Yes, today was just a wonderful day. 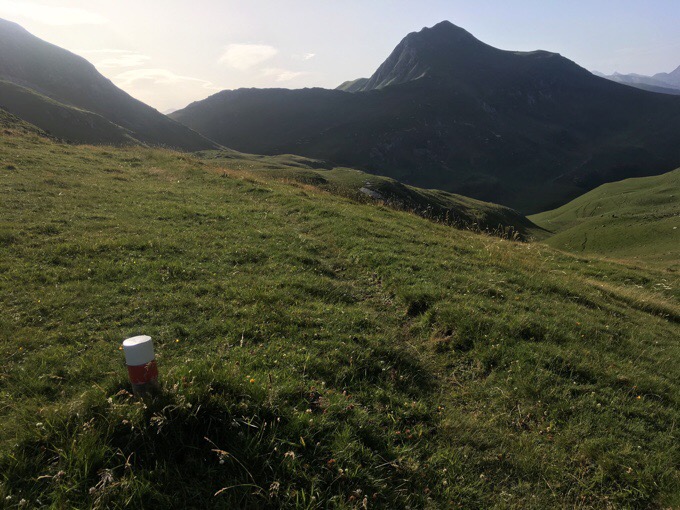 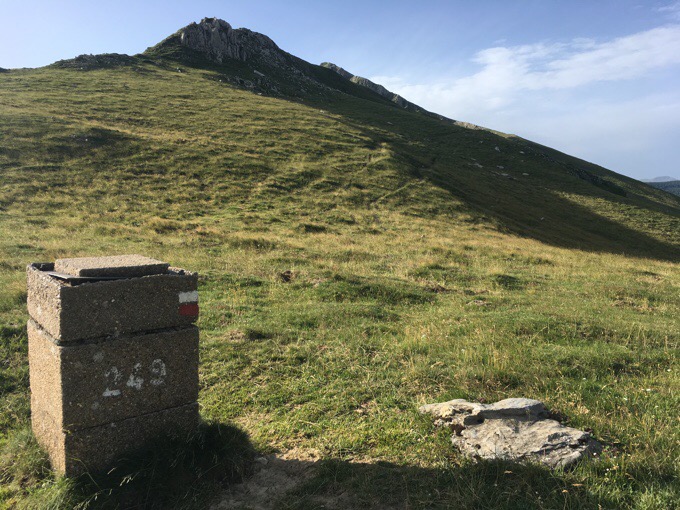 These numbered border markers along the border of Spain and France also work as good landmarks.

I hiked most of the day on my own and leapfrogged with WN&J. We knew we’d be ending in the same place, so we knew we may or may not overlap, but are happy to each hike our own hike and see each other throughout the day as it naturally unfolds. I took today to use my new tripod with delayed photos to get me in more. I’m really liking the new tripod setup with the Pedco mini tripod. 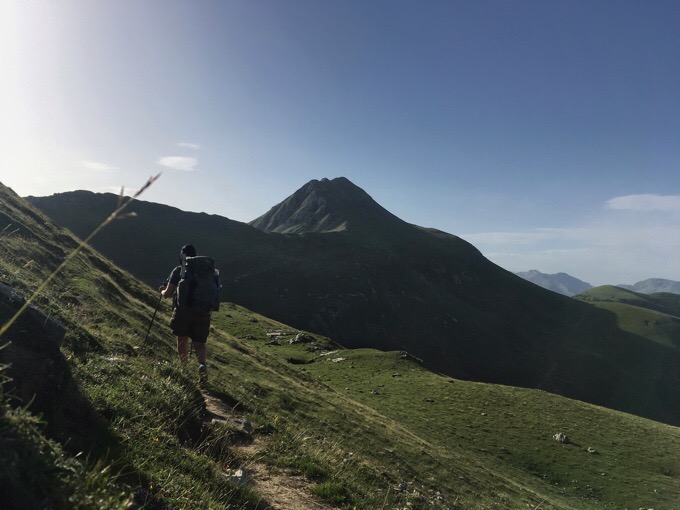 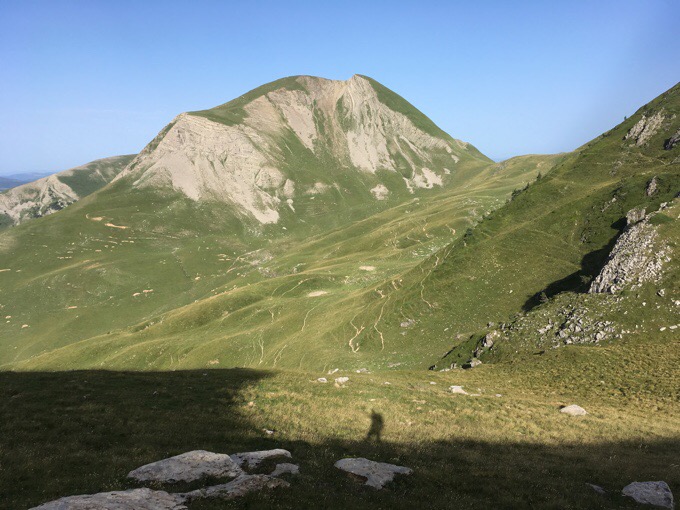 Looking back the way I came. See my shadow?

I got service early on and was able to call the one hotel in Lescun, where we will be arriving tomorrow morning. It will be a Saturday, so we wanted to call as soon as possible to try to reserve something. The hotel was fully booked, but I got us the last room group room in a gite. There are many gites along our route and I’m interested to see what it’s like. It seems to be like a hostel and is also owned by the same people that run the hotel. So glad I nabbed that room (just €16/$18 each), so we didn’t have to tent. We all were looking forward to our first rest in town after a tough first week. 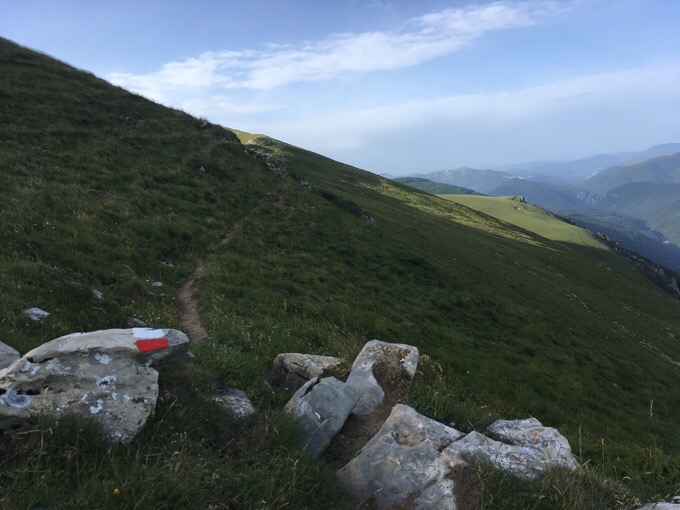 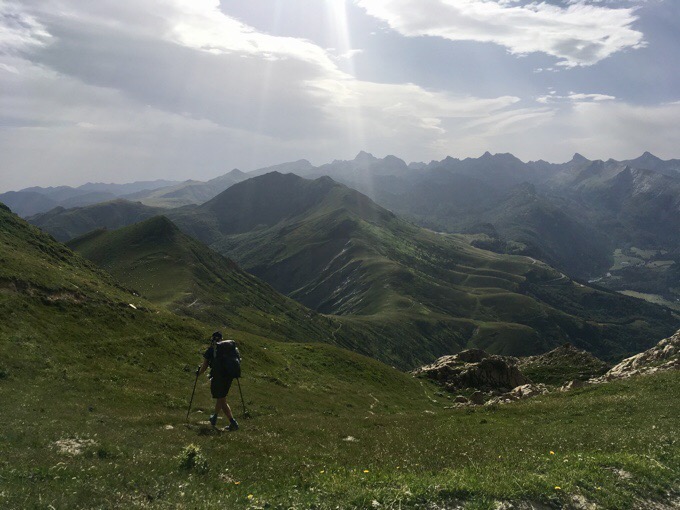 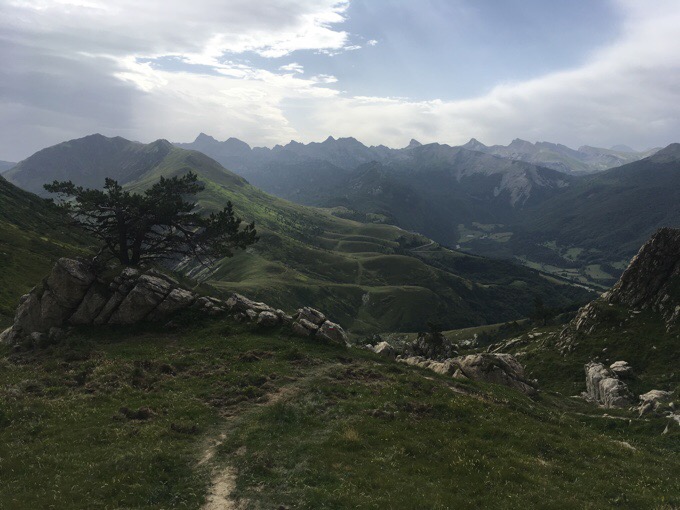 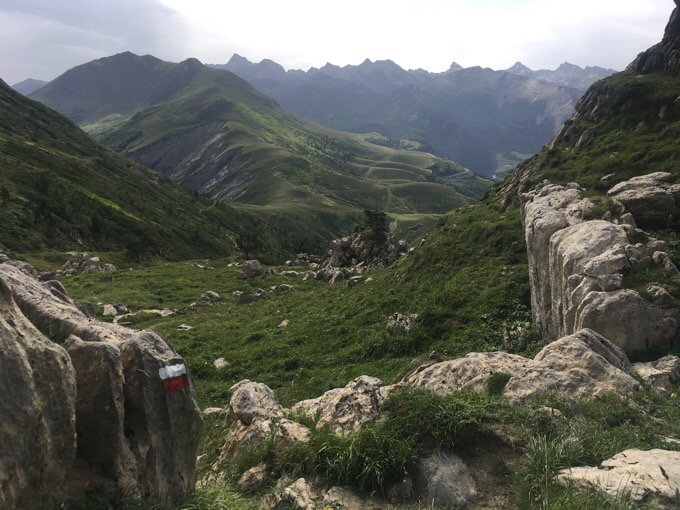 In the late morning, I caught up to WN&J. The heat today was quite humid and we had a shorter day, so they were taking it at a relaxed pace since they had all day. Because of the humidity, it felt hotter than when it was 90F/32C the other day, but it was only about 80F/ 27C. We were dripping sweat though. 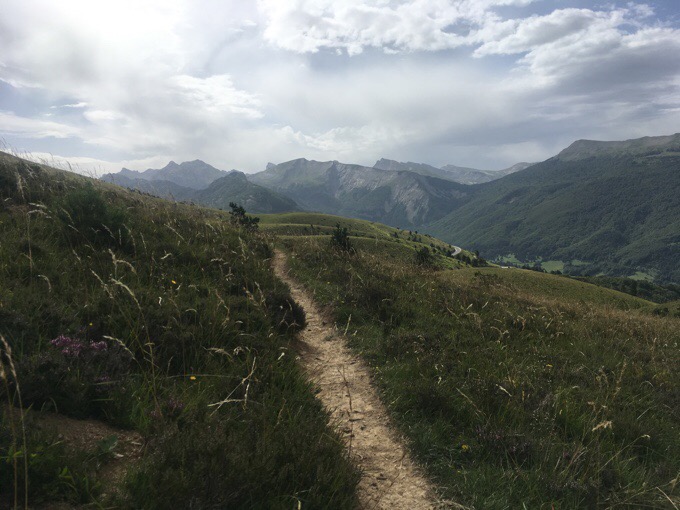 Soon after overlapping with WN&J, I saw a building with a cell tower near the trail. I finally got strong enough service to post some blogs. I had four I had yet to get up, so I did two while I sat under my umbrella to shield myself from the sun. It took an hour, but I had time today.

When I finished posting, it wasn’t long to the landmark of the Refugio de Belagua (no longer operating). WN&J had eaten their lunch near the building and were leaving to continue on, so I joined them. We immediately got turned around and it took awhile to figure out where the path went. To make a long story short, for future hikers, DO NOT follow the red-white markers going down from the Refugio de Belagua. There are other red-white markers that stay higher, and those are the ones you want. Your view should look like this as you walk away from the refugio. 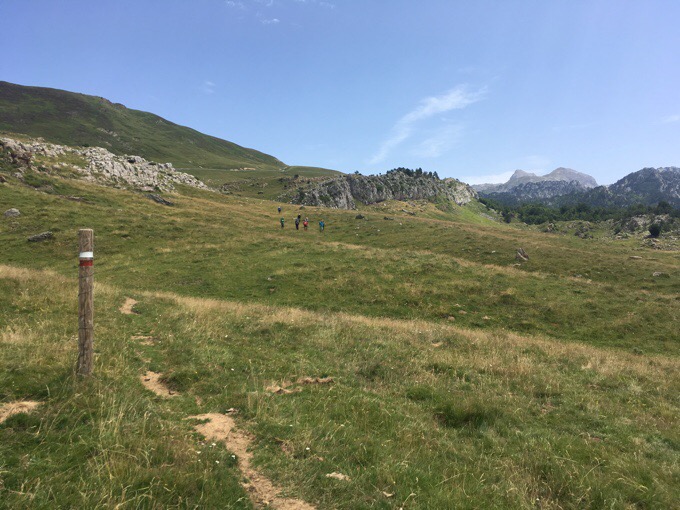 The excitement of the afternoon was that we entered the high Pyrenees! Once we got on the right path and entered a shaded area, I stopped for my lunch and WN&J carried on. I left from lunch and finished up the beech forest section that had a neglected feel to it. There were more red-white blazes to confirm the correct route. Very convenient and enjoyable. 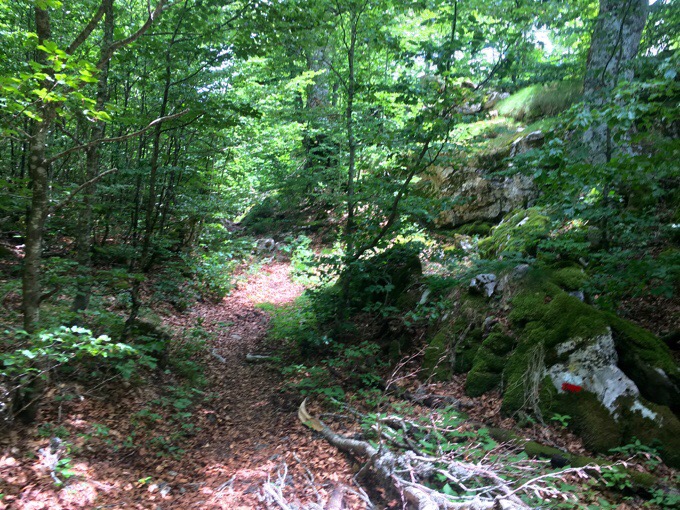 Then the route opened up to what looked like an explosion of limestone that needed to be navigated through for the next couple of hours. 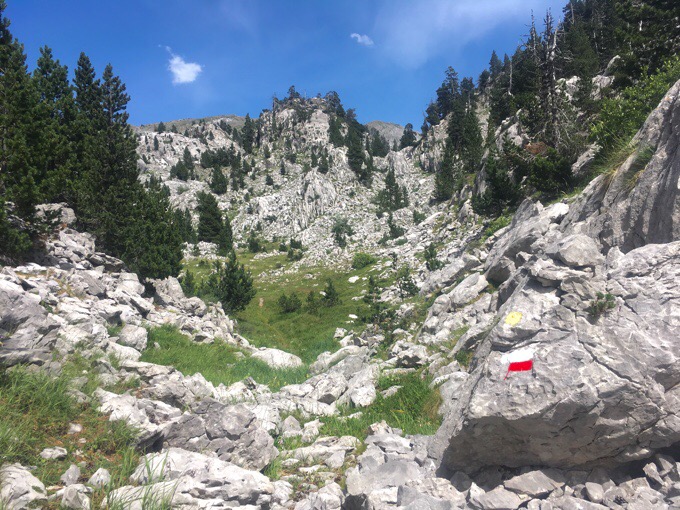 Those of you unimpressed with the Pyrenees thus far, this is where the real Pyrenees everyone is referring to begins. We’ve entered the High Pyrenees! Other than the humidity, it really was a great time to be out here. I listened to my music and just loved it. The current song on repeat is “I Lived” by One Republic. Hard not to fly listening to that with this scenery! 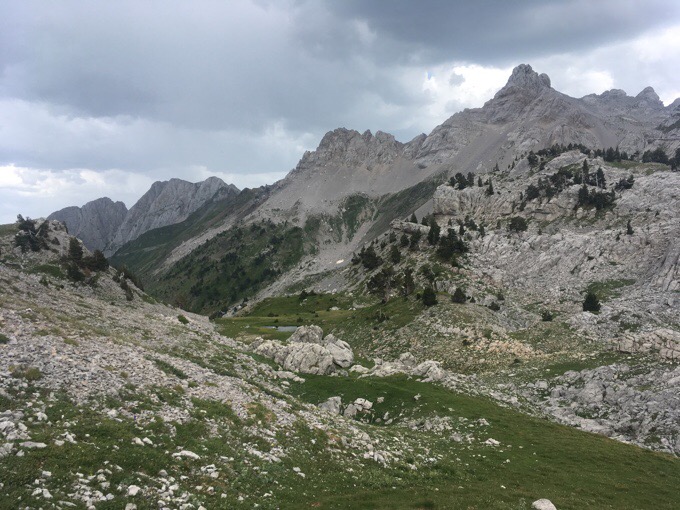 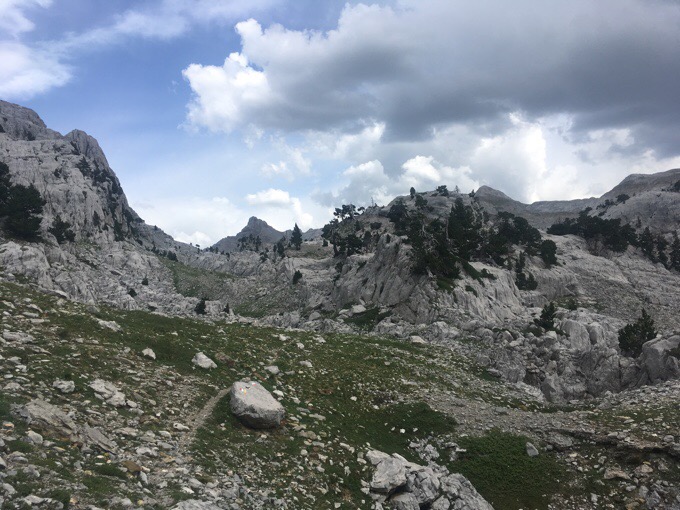 After about an hour I passed WN&J. The scenery just kept getting better and better. The clouds gathered to cover the sun at times, and that was nice. A bit of light rain was forecasted, and that’s exactly what happened. Just a few minutes of a light rain, and then it spit every so often. There were rumblings of thunder in the distance, and that thankfully passed. The Pyrenees can have the full spectrum of weather, and sudden thunderstorms are likely at any time. 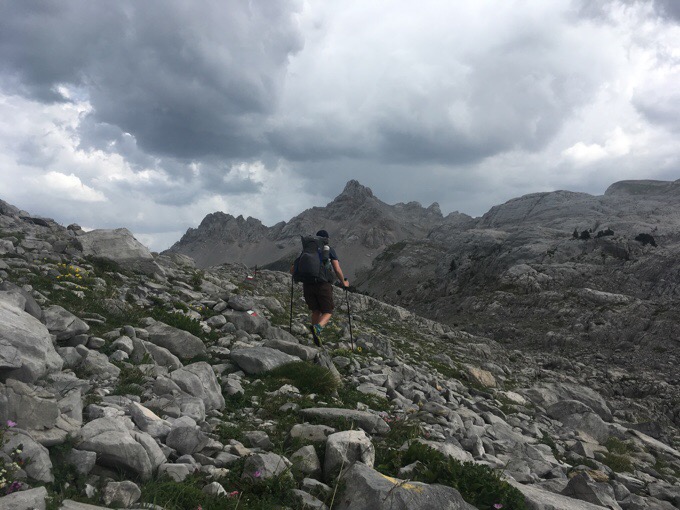 After a couple hours of gradual climbing, the route drops down into a valley to a spring that feeds two streams and is called Source of Marmitou. I got to it at 5:40pm, done for the day, and was ecstatic to dump my foggy warm cow water and fill up with the ice cold spring water. I sat there and took it all in. So awesome to be in such an idyllic place and have it magnified by having it all to myself. It’s great to feel ALIVE again!!! I do like that this route is more remote and has fewer people. There’s a rush in being out here solo in such a grand place. Now that we are in the High Pyrenees, we may see more people. 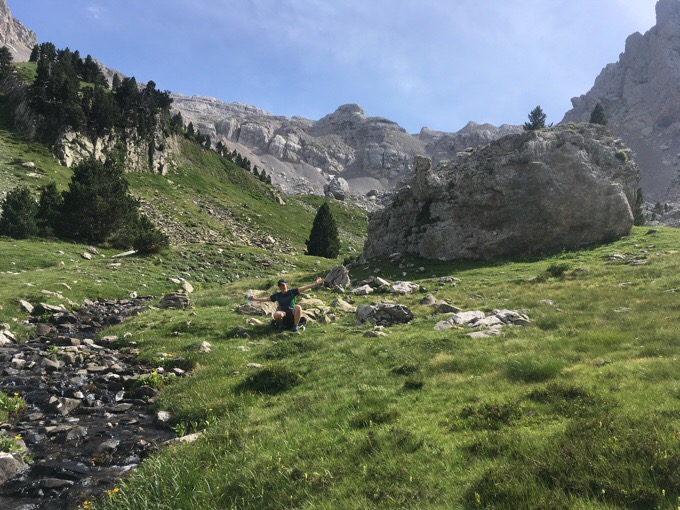 We planned to camp there, but it was not as sheltered as I normally like. I took time to find the perfect sheltered spot for all three of us down below the water source and in a pocket of rocks. I ate dinner up on a rock and kept and eye out for WN&J. They showed up about and hour and a half later having stopped to chat with three guys I somehow didn’t see camped higher up that just completed the section of our route we will be doing next week. It was nice to find out from them that there are no worries about snow on high passes next leg. That’s a relief! We are carrying microspikes just in case the first half of this hike. 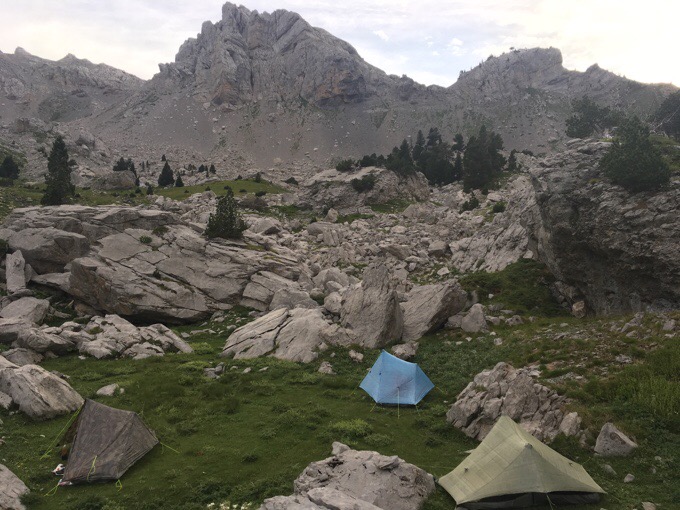 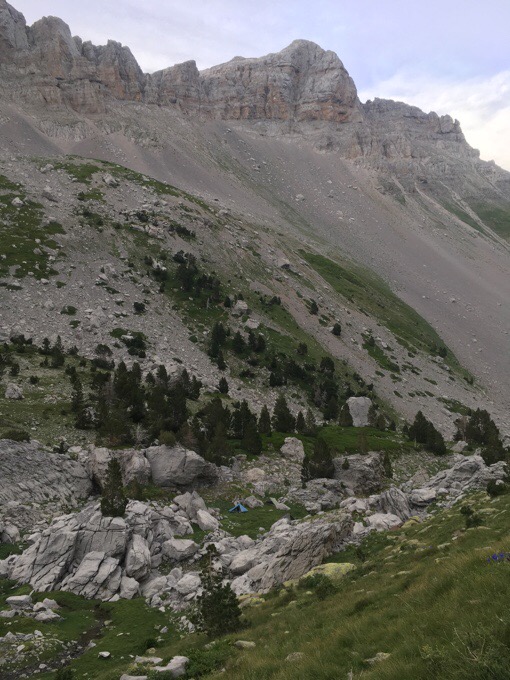 Just three hours of downhill tomorrow to town. It’s been a challenging start, and I’m impressed with how much elevation gain/loss there’s been this week. Definitely a workout and we all agree that we will be pushing less next leg and shortening the days to take it in now that we are in the High Pyrenees. With scenery like this, we don’t want to go through it too fast!