July 8th
Source of Marmitou-Lescun
*No mileage available. The guidebook lists distances on the route by time rather than miles.

It was a great night of sleep and we all were looking forward to a short hike down to our first village overnight in Lescun. I didn’t quite feel the drive for town as far as hunger, but we hadn’t showered in 7 days, and that was a motivator for sure after these hot days. I left just before 8am, and as usual, Why Not and Jim got out around 7am. It rained lightly for a bit overnight, but our tents were dry by morning. It was cooler with gray skies this morning as I headed down to town. 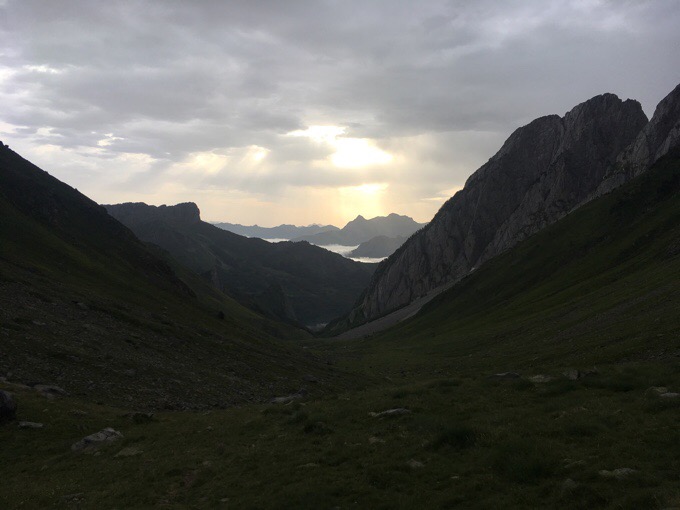 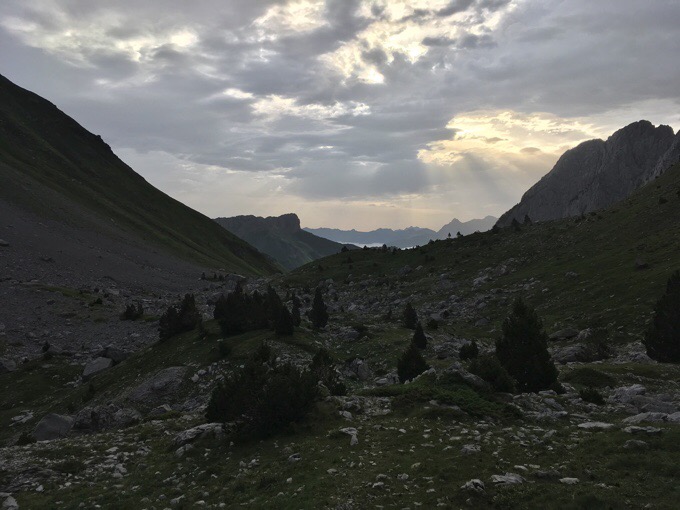 On the way down, the route goes over a stone bridge by a sheep farm. I had to walk right through a herd, which can often have a sheep dog or two. They usually bark from a distance, but don’t get too close. This one scared the shit out of me! It was larger than most sheep dogs and charged way too close. It growled and snapped close enough to me three times that I could feel its breath on my arms. Damn, he’s good at his job I bet! Totally freaked me out and I did my best to talk to him calmly as I walked through and he continued to follow and bark. I’m not a fan of this aspect of the Pyrenees at all! Really making me consider the mace or something, but I’ve heard this is what they do and they shouldn’t bite… 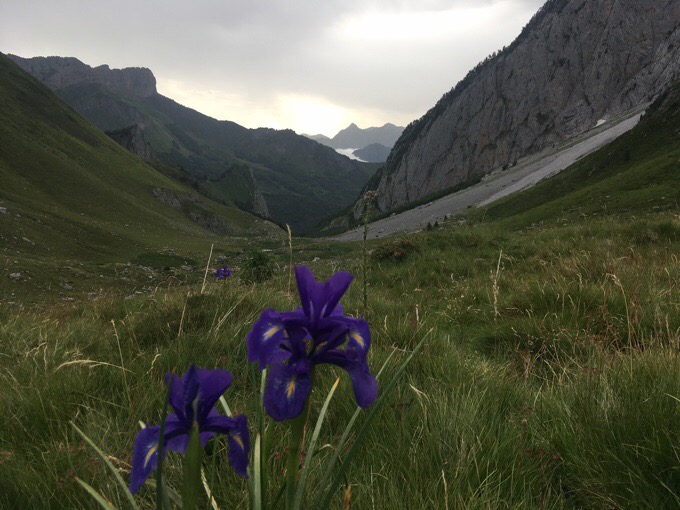 There was a bit of low lying fog to drop through briefly and then I entered a wonderful forest. 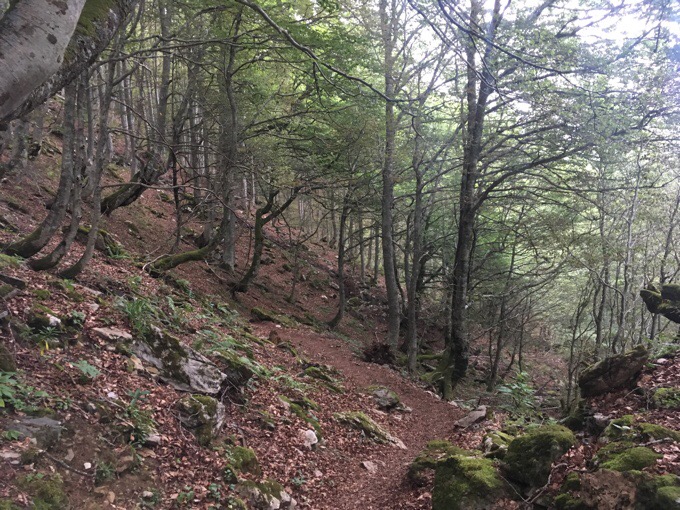 Then down some switchbacks that felt like they were made centuries ago. I could have been in Outlander. Yep, I know a few people who would like that reference;) 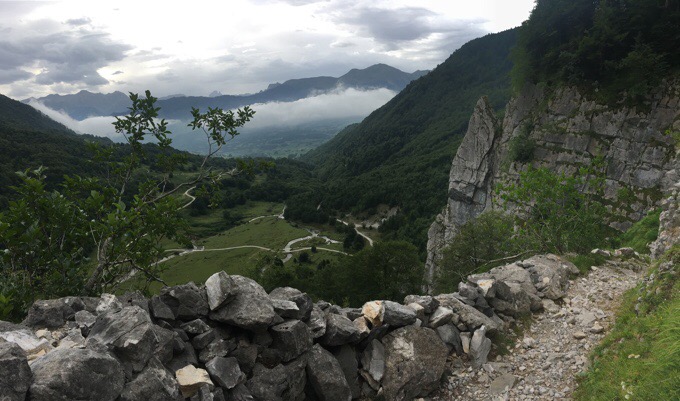 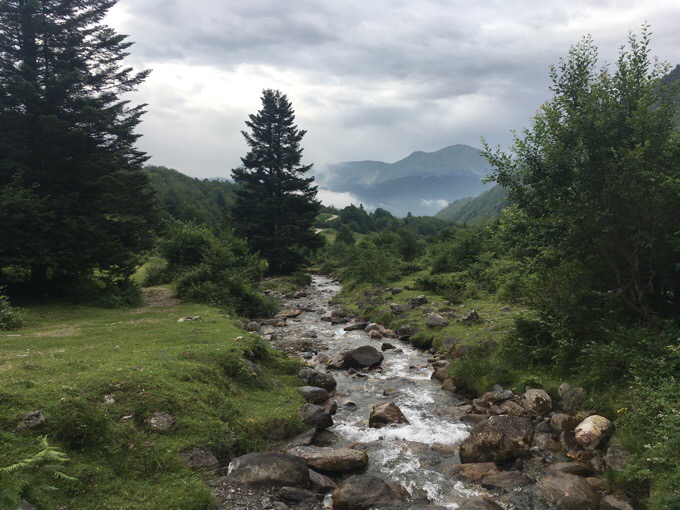 At the bottom, the mountains loomed awesomely massive straight over me. 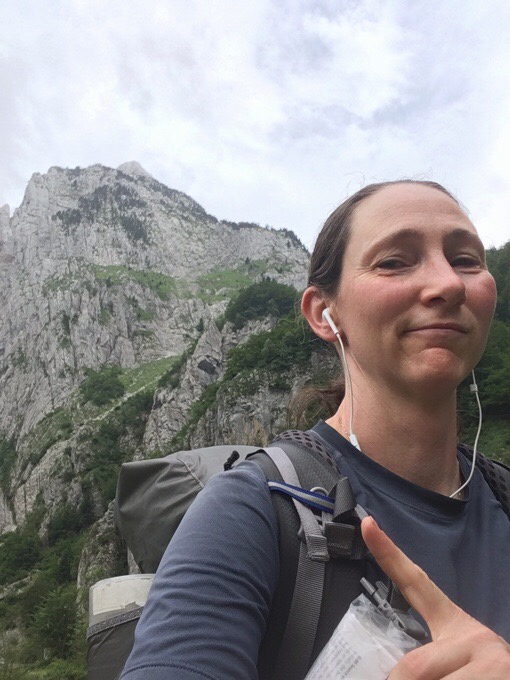 Finally, it was a cruise on a downhill road that was enjoyable to jog. The guidebook has been spot on with estimates, and said it would be 3hrs to Lescun, with some nice gradual downhill and an empty pack, I was able to make it in 2:10, yay! Lescun is a classic small French village. The church bell even rang just as I entered the village. 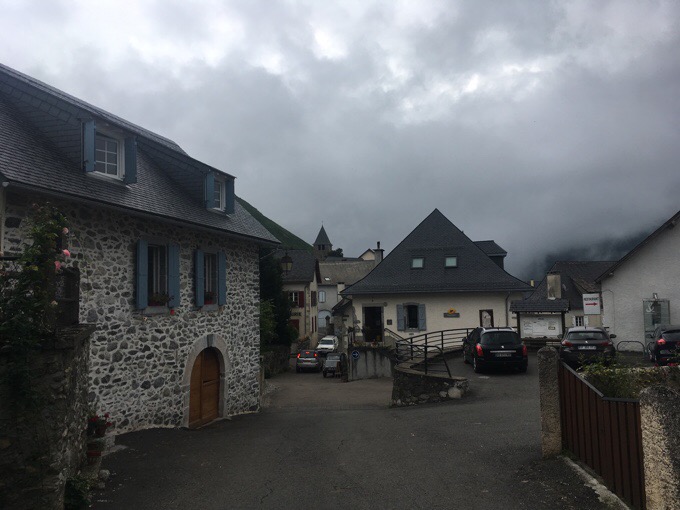 We checked into the gite (like a hostel) next to the hotel that was booked up. The people that run the gite and hotel (Pic d’Anie) are super accommodating and kind. They are very patient with our lack of French words. Thankfully got a bunk room booked yesterday for the three of us and aren’t in the main shared room with 10 or more bunks. It was only €16/$18. 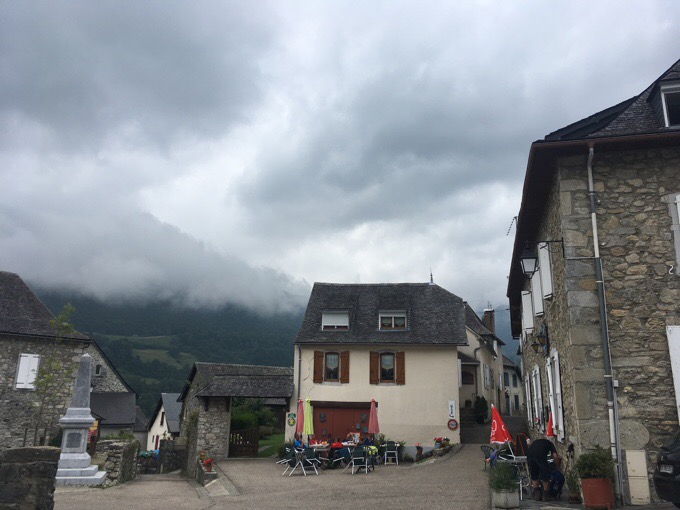 Hotel on the right, gite in the middle. I’m standing in front of the store.

There are many hikers here on all different routes including the HRP. The GR10 also comes right through the village. I find it a bit overwhelming, but WN&J love talking trail. The wifi was a bit slow, but thankfully good enough to load blog posts. I don’t have phone reception here with SFR, but WN&J do with Orange. Good comparisons that we have different providers. I would say it seems they do get service more than I do. Jim is kindly letting me use his hotspot to load maps I didn’t load before the trip and need for my phone. I’ve tried the ViewRanger app, but am a creature of habit with the Gaia app.

My hair hasn’t been cut in over a year, and I was too lazy to do it before I left. I was even thinking it would be a good motivator to let it grow long enough to donate to Locks For Love, but it’s been driving me nuts to deal with. So, Why Not offered to cut it for me! She isn’t a pro, but taught herself to do her own. I figure it’s always up, so it won’t matter if it isn’t done perfectly. Her quote of the day was, “I don’t know, I’m a dentist (retired), so I should be able to cut hair. We’re all the same.” Cracks me up! I don’t know the opposite could be said and that I’d want a barber doing my root canal…Either way, we were successful, and I feel so much lighter! THANK YOU Why Not! 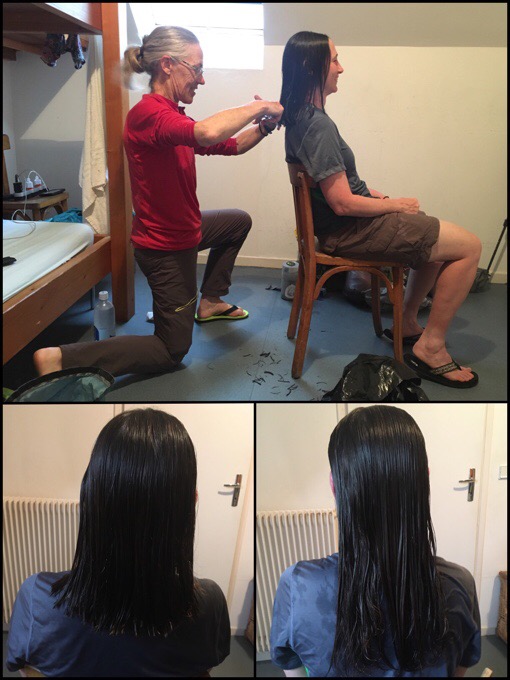 WN&J bought cheese from the local cheese maker. I tried some, but didn’t like what they had and got some at the store. 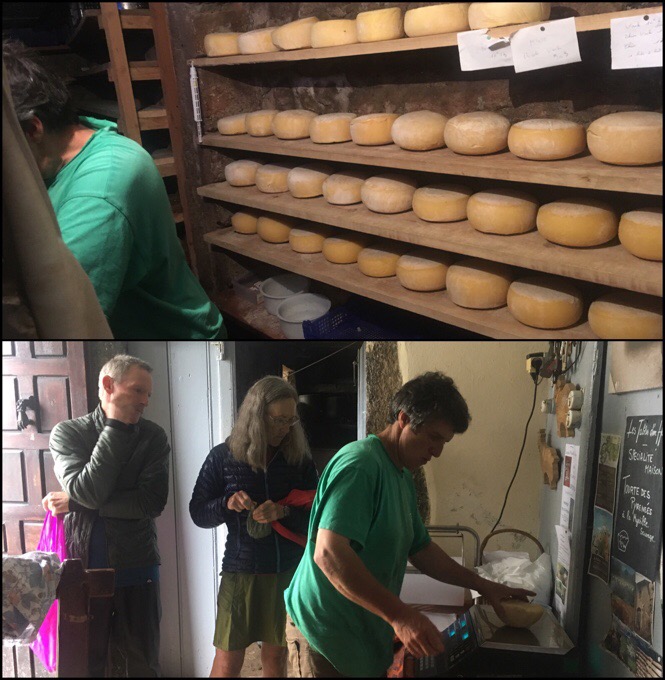 We had dinner at Les Bergers (The Shepperd’s) Bar. Very social there and lots of loud jovial singing, which felt unreal cause it was like a scene in a movie. It is apparently not a regular occurrence. 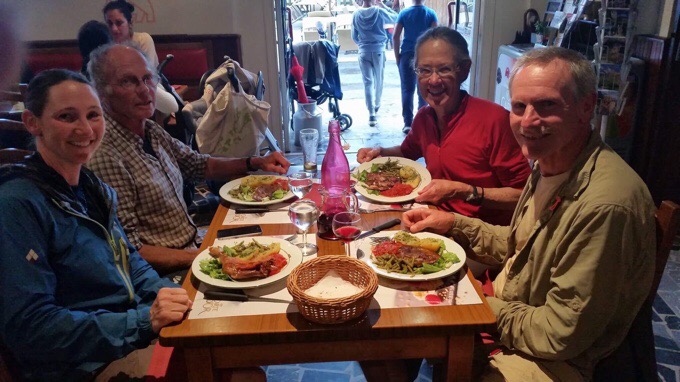 I didn’t get to everything I would have liked. With less internet this week (and all trip), things are backed up. Know that I do see all your comments on the blog and social media even if I don’t reply. It’s fun to get them and I know you all understand I won’t be replying to most.

It rained on and off today and fog settled in early as it seems to do here. Looks like possible rain tomorrow afternoon and possibly clear after that. Good news because tomorrow begins another 7 day leg through the High Pyrenees!