July 9th
Lescun-Lac d’ Estaëns
Campsite Elevation: 5810ft/1771m
*No mileage available. The guidebook lists distances on the route by time rather than miles.

As usual, I stayed up a little too late in town and didn’t get to sleep until 12:30am. I didn’t feel too bad because Why Not also popped up after the lights were out to grab her phone and get things done. She couldn’t sleep with her mind racing and figured she might as well get something done. Sometimes, being in town can feel overwhelming because there’s so much to do, and a lot of things coming at you in a finite period of time. We arrived at 10am yesterday, but the hours went by too quickly. I’ve tried to get better at doing things higher on the priority list, and just letting go of the things that aren’t a major priority in towns. We were up around 6:30am. I was impressed that all the other hikers were up even at 6am and packing. That would be rare in the US. We were actually the late group!

There was no rush to leave because the layout for today in the guidebook shows that this section takes less than 7hrs to hike. We all are intending to do a more relaxed pace from here on out. Why Not and Jim intend to hike the 7hrs probably and eat at the Refuge d’ Arlet, our first refuge. They are like huts and you can pay for dinner and/or a bed. WN&J are drawn to the idea of dinner at the refuges to have a social experience and carry less weight. I’d rather avoid them unless there is foul weather, so I carry my food independently. I saw that the weather seems ok with low winds, so I was excited to set off on my own and just land where I land around 6pm. I left the gite at 7:45am and said goodbye to Why Not and Jim. This really might be the last time we see each other on this trail.

So, we said goodbye and I headed out into the thick morning fog that seems common for Lescun. The first hour or so of the day I followed the GR10 and the red and white markers. It was pretty straightforward except when I failed to realize the GR10 had a trail to cut the switchbacks of the road, nice! 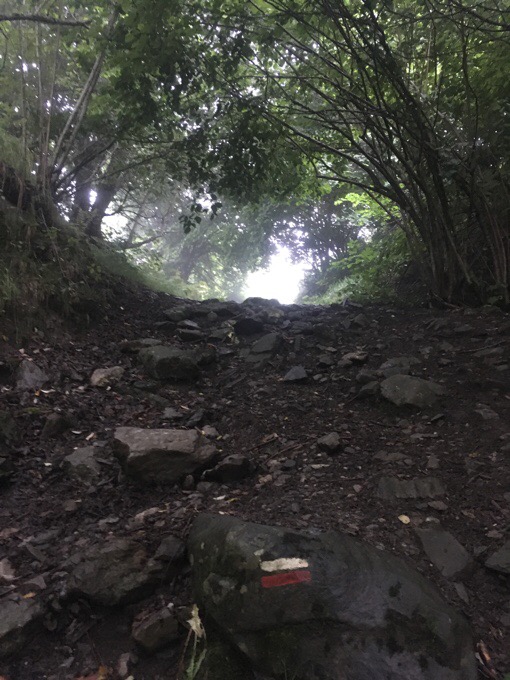 I hoped the fog would lift. I could look back and see Lescun with a cloud right on it, but it was lifting. 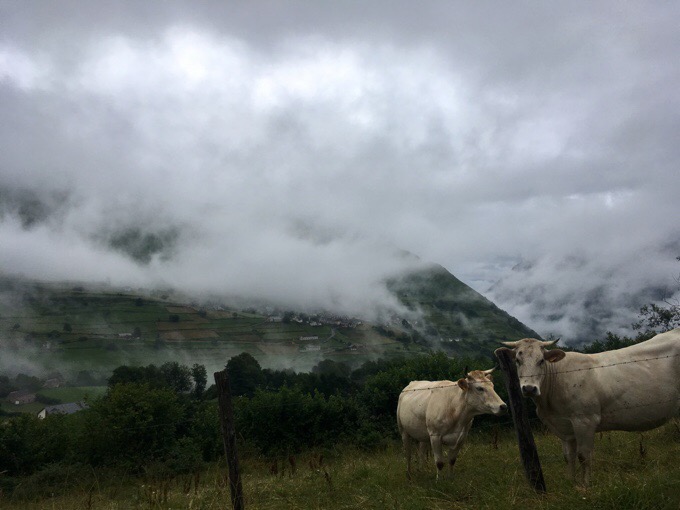 Lescun under the fog in the center.

I entered the National Park and it was immediately clear, even with the fog, that this place is special. As I climbed up, I saw Johann who we had dinner with last night and is also doing the HRP. In my haste yesterday I forgot to mention who he was at dinner. He has been walking for at least two months I think, doing other long paths out here (there are tons). He amazingly does not use anything but the guidebook to navigate. I think he has a compass, but no maps. He was stopped at a cabane (old hut used by shepperds) taking a break, and trying to determine if he was still on trail when I walked by. The book clearly says there’s no path from the cabane, and there’s a very large path, so it was confusing. It was nice to see him. 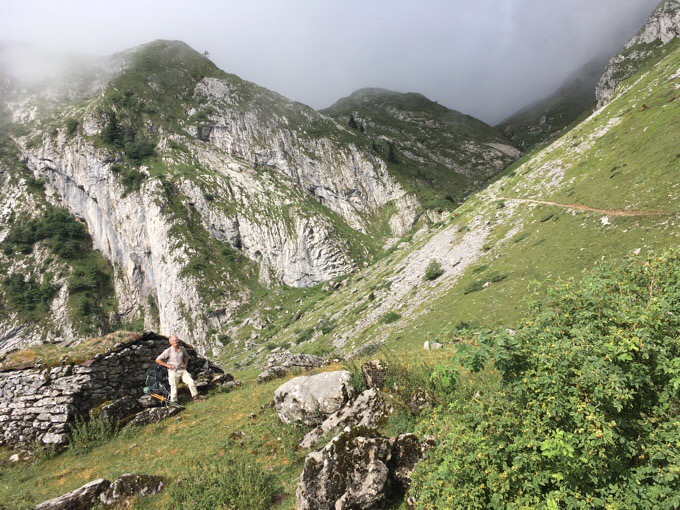 Sadly, the fog didn’t lift. We have had amazing weather so far, so I’m just thankful it wasn’t rain as well. Everyday that hikers are able to hike without fog or rain is a day to be grateful for out here. It’s wonderfully green out here, but that’s because it rains. It’s to be expected. I knew this area was quite scenic, so it was a bummer, but common for this area. Why Not and Jim were a couple hours behind me and might have gotten views, so I’d check Day 8 on Why Not’s blog. I still got lucky with some views as fog always adds a mystical lens to the mountains. There were fleeting moments of what was hiding and it was suspenseful to wait and see what would be revealed. I took way too many photos. They don’t do it justice. 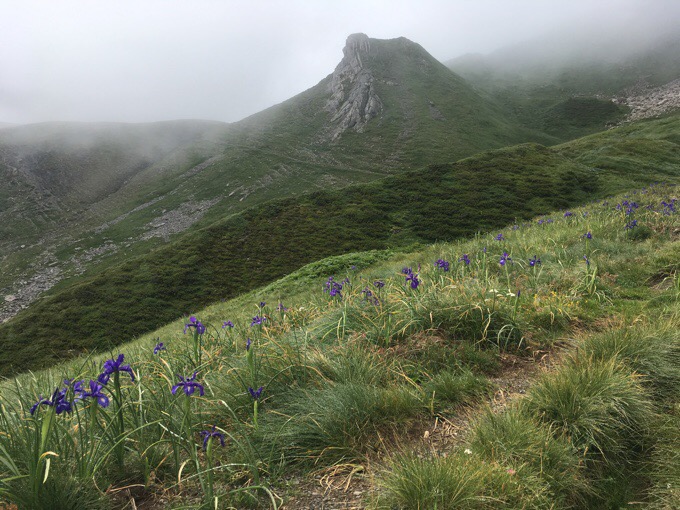 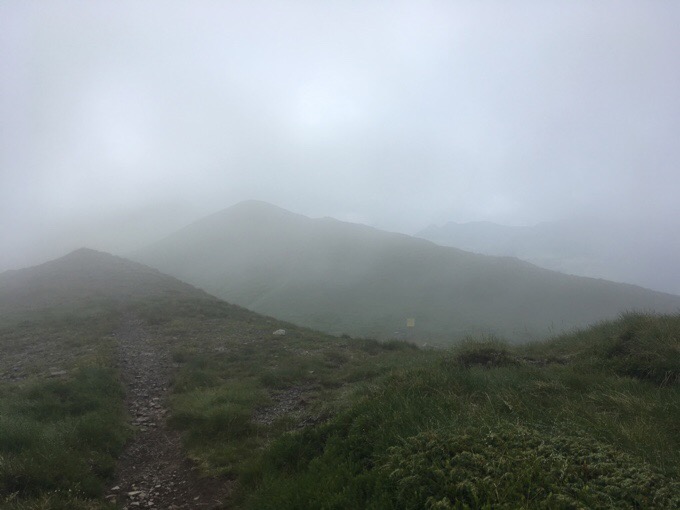 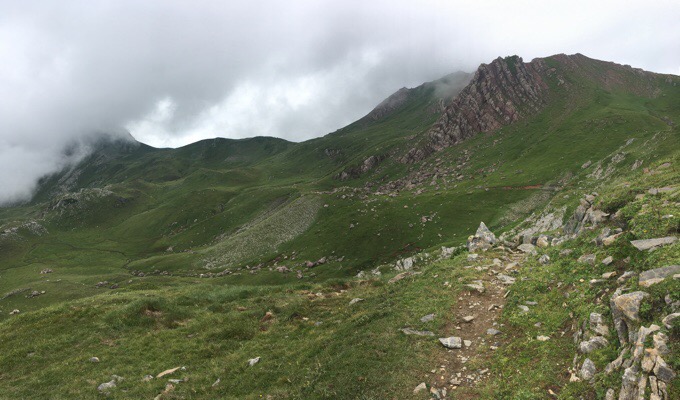 There were a ton of horses grazing. Sometimes I wouldn’t see them until I was right in front of them with how thick the fog was. They were really beautiful and it’s just tough to think they are being raised to be eaten…but we do that with many animals in the US as well. 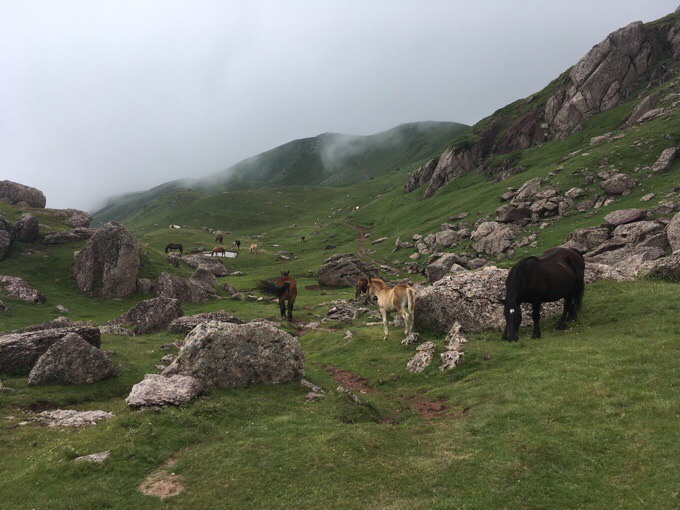 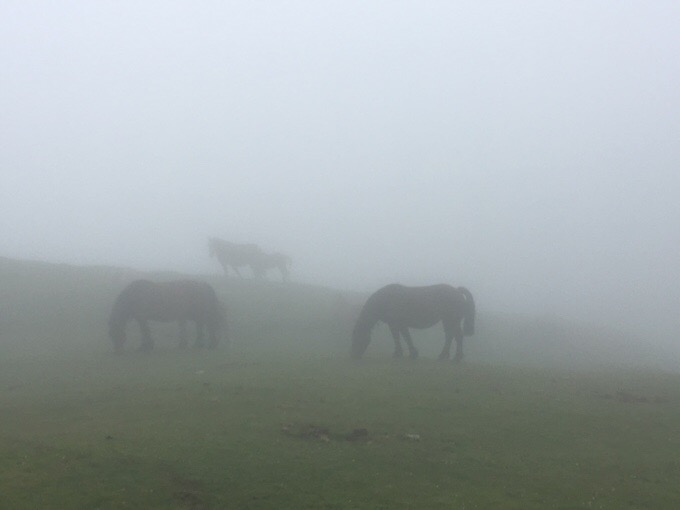 I ate lunch on a rock near the horses to avoid mud and wet grass. It was a pretty perfect rock. As I was packing up, Johann arrived and liked the spot so much that he decided to take an extended break there as well. I said goodbye to him for probably the last time and continued on. Then the fog lifted some! Yay! 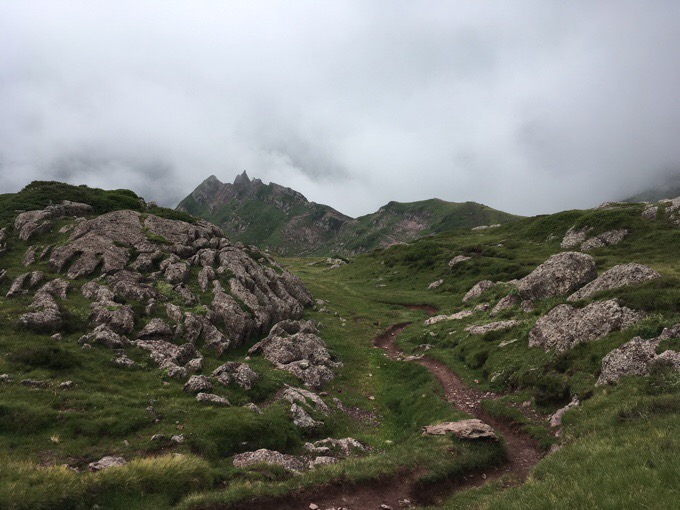 I arrived at the first refuge on the route, the Refuge d’Arlet, at 2:30pm. No one seemed to be inside as it had just cleared and many groups were out hiking. I saw a good 40 people today I think. Some large groups, some couples, some solo. This is understandably a popular area. 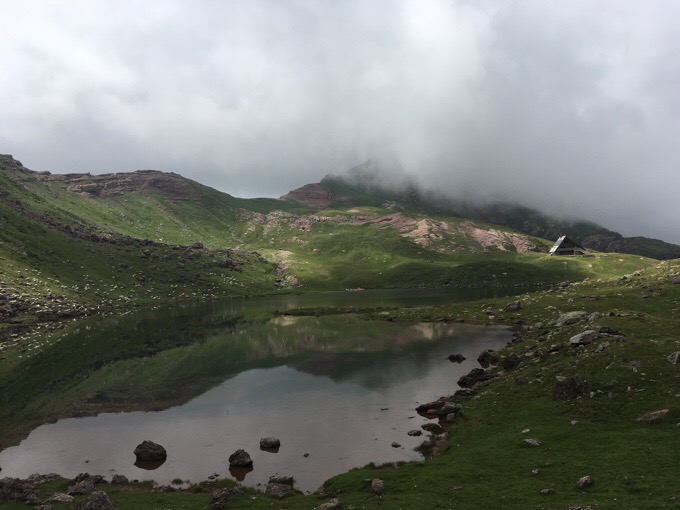 Refuge d’Arlet at the end of the lake.

I continued on and the views just got better and better. Having climbed 3608ft/1100m, I then went down 1968ft/600m to a valley. It was gradual and great terrain for taking in the surroundings. One random thing, a bee flew at my face and stung me in the temple. Fortunately, I’m not allergic or anything, but that was not an enjoyable feeling. 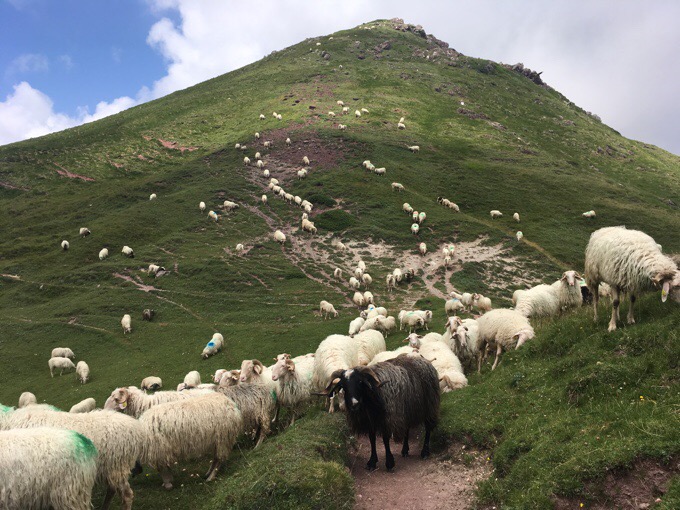 I listened to two new podcasts for me today. One is brand new with just one episode out so far. It’s called The Routes Podcast. Thru-hiker, John Z interviews other long distance hikers and the tag line is, “Meaningful conversations with hikers who venture off the beaten path.” The first episode was with my friend and fellow PCT 2011er, Dirtmonger. Well worth a listen. It’s a bit of a window into the kind of conversations hikers can delve into with other hikers (other than gear and poop) once you spend enough time on trail together. 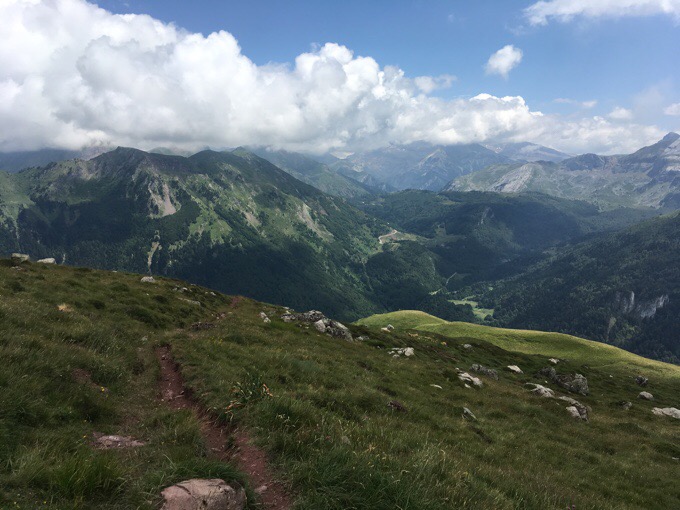 Gradually down into this valley.

The second podcast is called Harry Potter and the Sacred Text. Two young people who have been to divinity school sequentially examine one chapter at a time of the Harry Potter series and discuss it as a sacred text. Very interesting. Each chapter gets a theme like commitment, loneliness, trust, imagination, etc. It’s a great way to relive the series and take it a step further with philosophical discussion and also encourages reflection on these themes in your own life. I can only listen to podcast when I don’t have to focus so much on navigation. I don’t know how often that will be out here, but it was nice this afternoon. 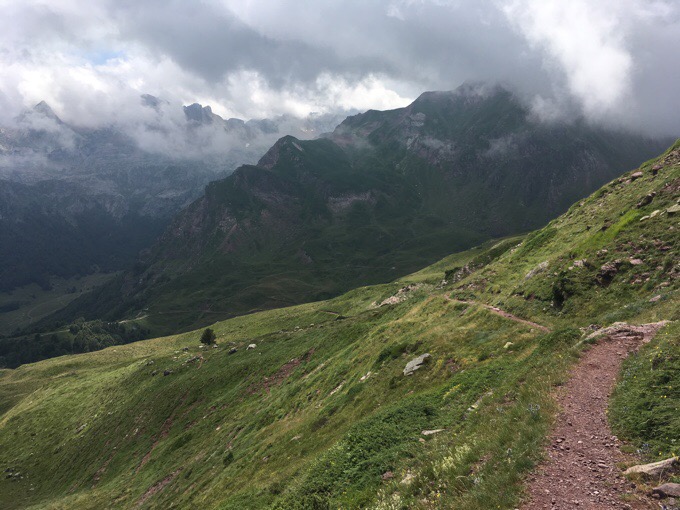 Once at the bottom of the valley, I had a steep wooded climb of 1230ft/375m up to the beautiful Lac d’Estaëns. I was hoping to be able to camp there once I realized I had time and energy to go that far. The rules in the national park are that you need to wait until 7pm to set up a tent and it needs to be down by 9am. No problem! I arrived at 5:45pm and did some of my camp chores and blogging until 7pm. The skies completely cleared and the wind is so calm that the reflection on the water is almost perfect. What a great spot!

If my tradeoff of some fog this morning was to be able to make it to this spot tonight, I’ll take it! I can hear cows and bells in the distance and there is some fresh cow dung around, so I hope they don’t visit overnight. There is a couple pitched on the other side of the lake and another group around a corner I can’t see that were swimming earlier. 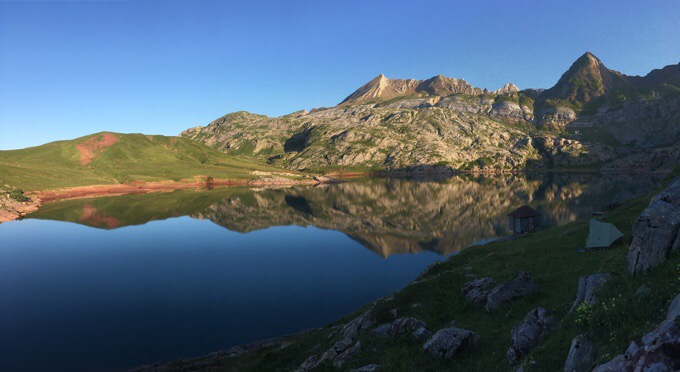 I like the relaxed days too. Stopping by 6pm gives me some time to watch a show usually. I’ve been watching Breaking Bad, which I never saw while it was airing. I’m hooked and am on season two. I love the Netflix option of loading things for offline viewing. The air is the coolest it’s been on this trip at night. Perfect for sleeping. I’m on a slight angle, but it’s worth it for the five star view. This is the kind of day I’m out here for! I’m a happy camper:) 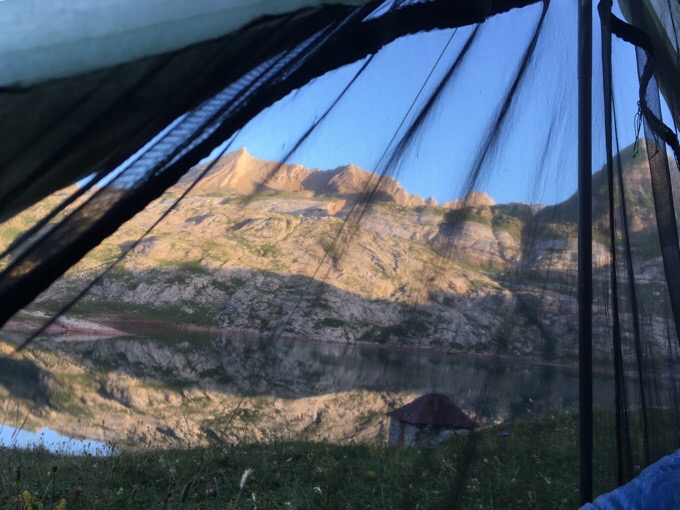 Note: It may be a handful of days before I get service to post again.