Day 9: The Hills Are Alive With The Sound Of Bells

Last night, I woke up around 11:30pm to see a full moon shining directly across from me lighting up the mountains and reflecting in the lake. 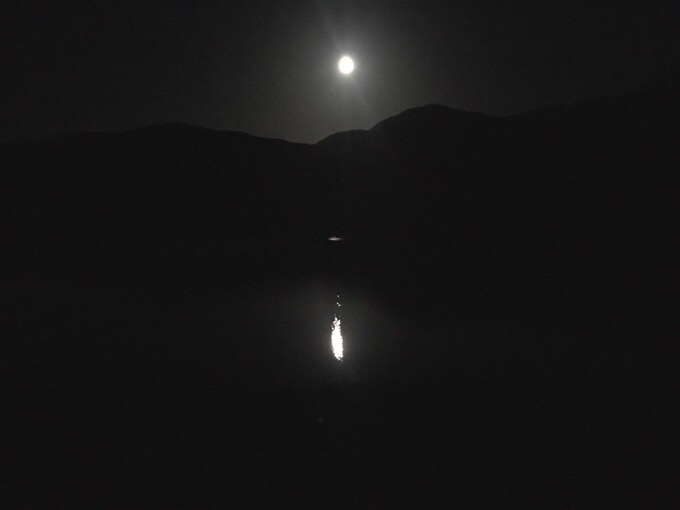 The air was still, and it was perfect for sleeping. Then I woke up at 1am to complete fog, which is to be expected in the Pyrenees, and shut my tent doors. Then, at 2:30am, I woke to hear rain that quickly became a thunderstorm. It lasted for 45mins and gave a good thrashing. Ugh, it wasn’t forecasted to rain until the daytime, and even then, I hadn’t heard thunderstorms. It can happen quick out here and is just part of being out here. The tent hung in ok, but I was pitched slanted, and water pooled on one side of the tent. I was sure not to let my sleeping bag touch it and went to sleep. I awoke at 6am to bells from sheep across the lake. I tried to sleep more and did some blog stuff and was out by 8am. The tent was surprisingly dry except for the floor. Not too bad considering.

I got going around 8am, and the first half of today felt like it dragged. I think it’s from the poor sleep last night. I rounded the corner from Lac d’ Estaëns with some great morning light and clouds and then dipped down into some low lying fog. 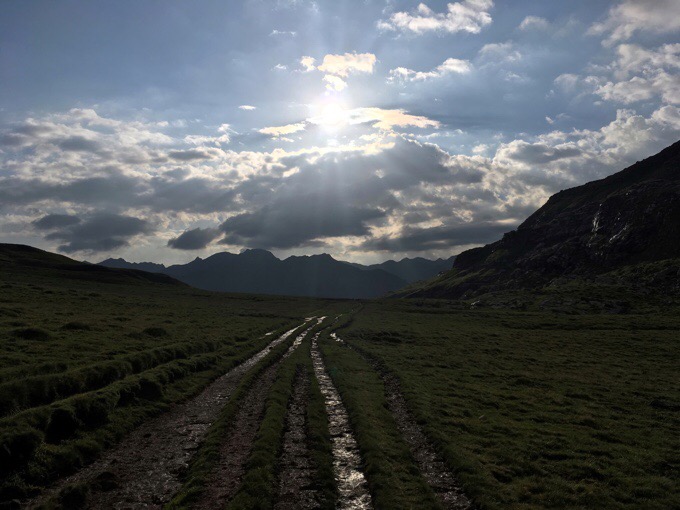 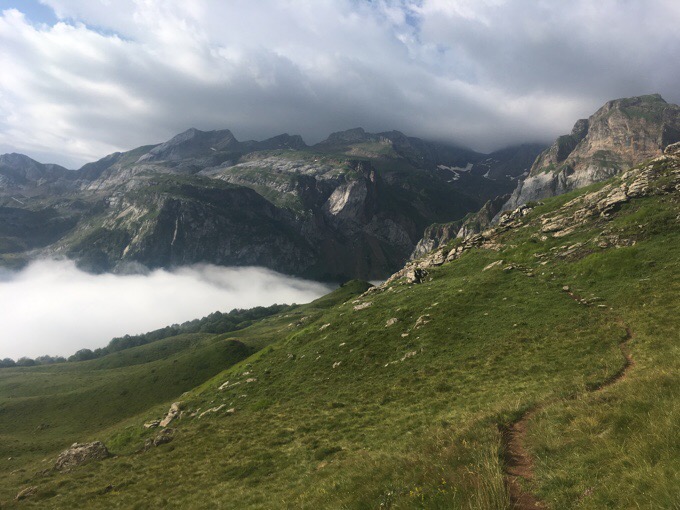 The fog in the forest reminded me of some of the mornings on the Appalachian Trail. Very mystical. 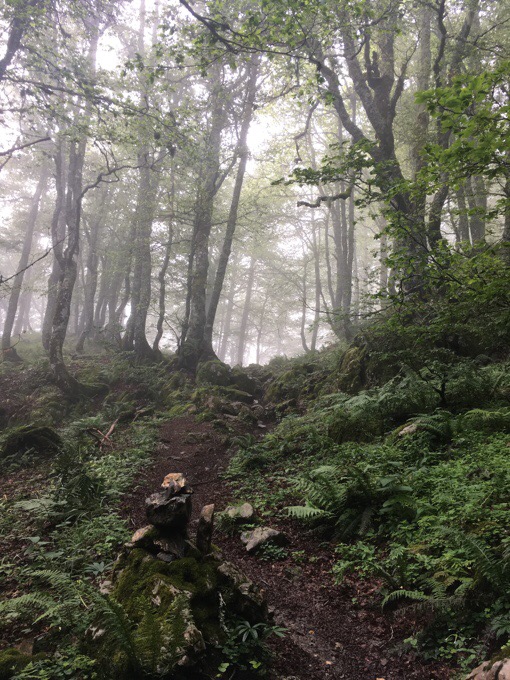 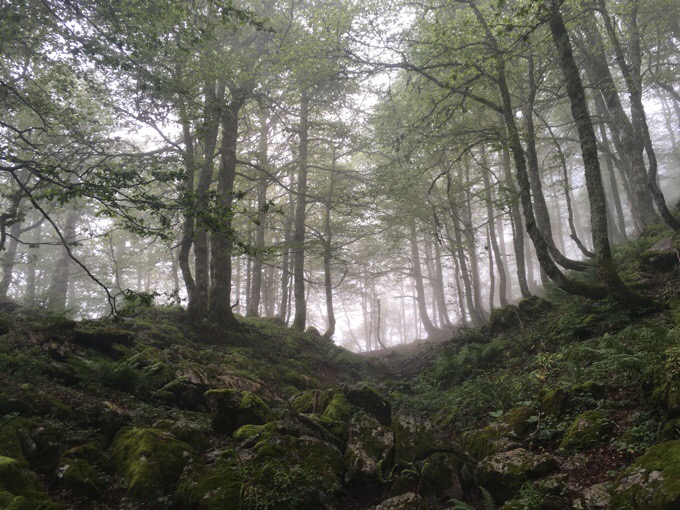 There were a lot of short ups and downs that were tiring and I couldn’t get my body to get an enjoyable rhythm. My mind felt like it was in a fog as well. Eventually, I was spit out to the Candanchu ski resort. Ski resorts are always odd to see closed down in summers with grass and concrete rather than snow. There is a small food store there that opened just as I walked up at 11am. Hearing it was small and had unknown hours, I already had most things purchased in Lescun. All I needed was a handful of tortillas, which they didn’t sell in Lescun. I got lucky and got the next to last package in Candanchu. I also had the best cell service of the trip and was able to get yesterday’s journal up on the blog. 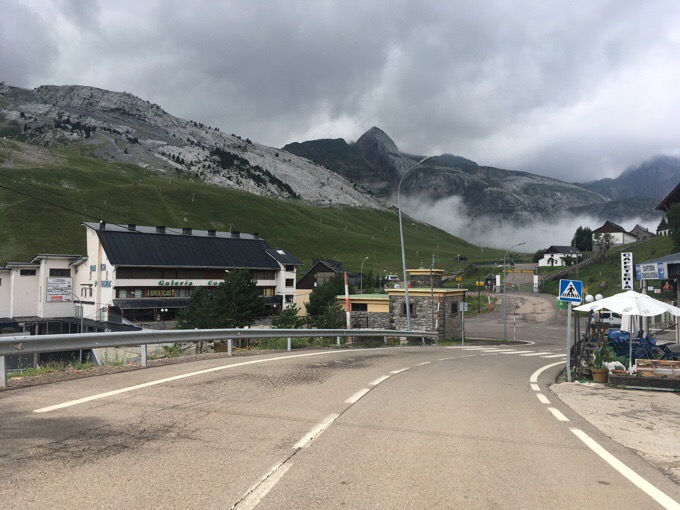 From Candanchu, I had an hour long road walk to another ski resort, Aston. It was much greener there, but it felt like a creepy closed down amusement park ghost town. 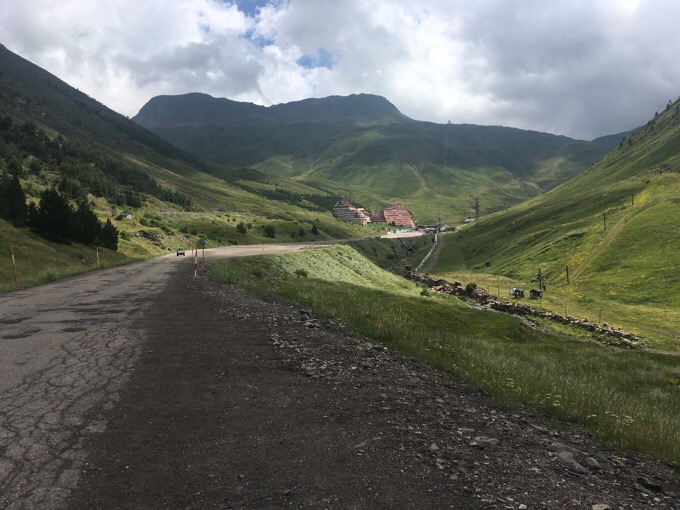 One of the lifts was operating to take tourists up. I ate my lunch there and was happy to have a trash can to put the empty can of tuna. Hardly anyone was around, but they did seem to have a cafeteria open for tourists. It was pretty run down there and made me wonder if it is even used as a ski resort anymore.

After lunch is when the real scenery kicked in. Blue sky was filled with white clouds and there was a light cool breeze. I hiked up from the ski resort to the lake, Ibón del Escalar and on up to Col Des Moines. 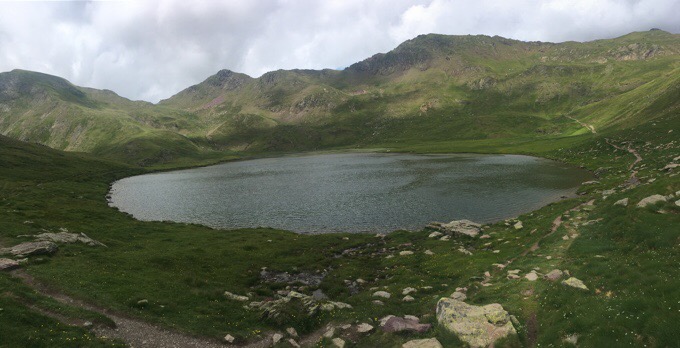 Having been on a road and around smaller green hills, I was totally surprised by the view on the other side of the col. It was like a hidden magical world and at the center of it was the dominating Pic du Midi d’Ossau. The photos don’t do justice to how grand this vista was. 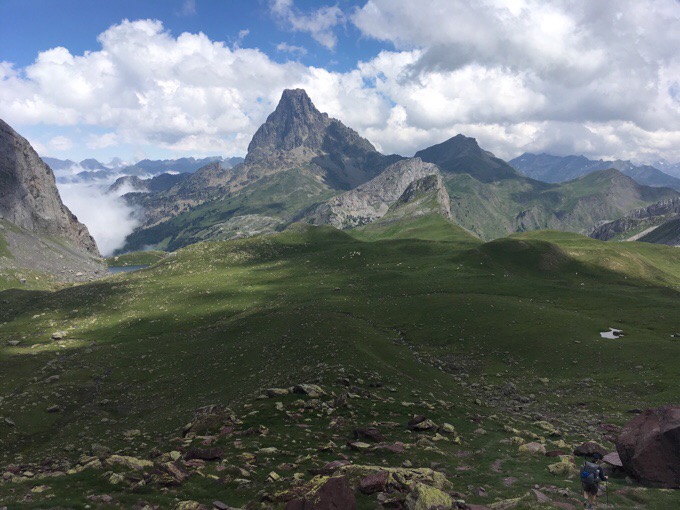 I dropped down into the valley enjoying the space and views. The only thing I can’t get used to out here are the sheep and cow bells. They echo from so far away and go on and on. I heard them the whole time I was in this area, and it took away some of the serenity and peace. 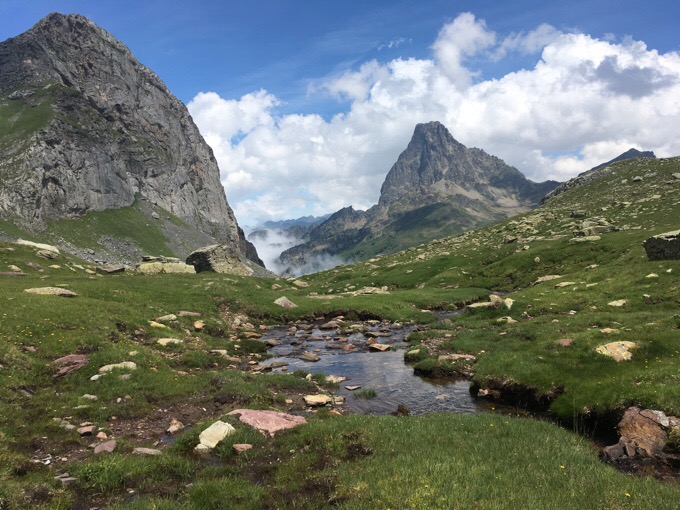 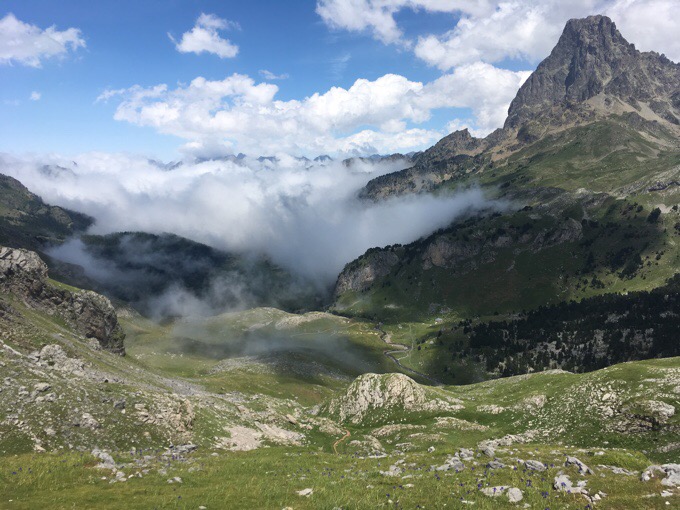 Then the cruise was over, and it was back up again. This time to what I think is the highest point yet, Col de Peyreget at 7546ft/2300m. On the way up was Lac de Peyreget. I swear, I’ll never be able to remember any of these words they name things out here! The climb up was the first rocky climb as well. It went very smoothly and the rocks were quite stable. 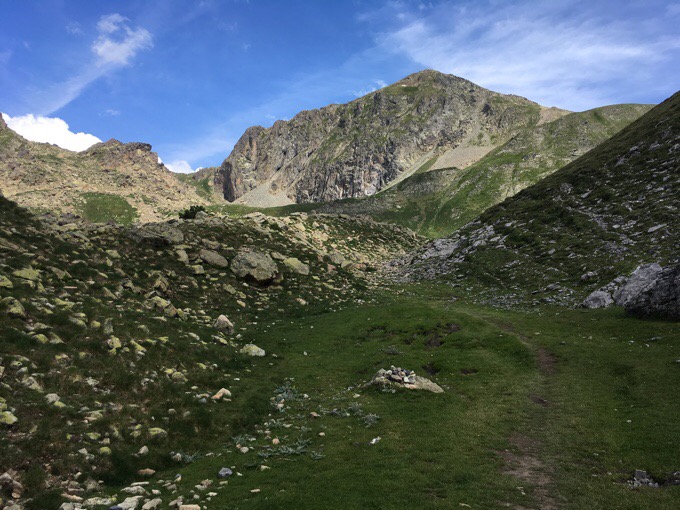 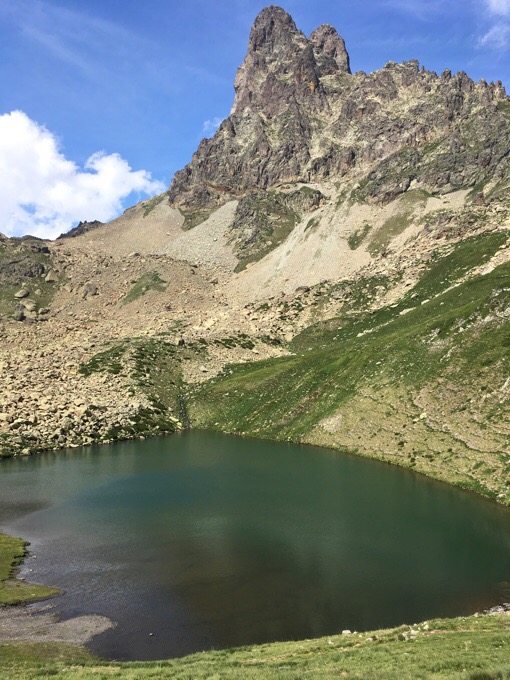 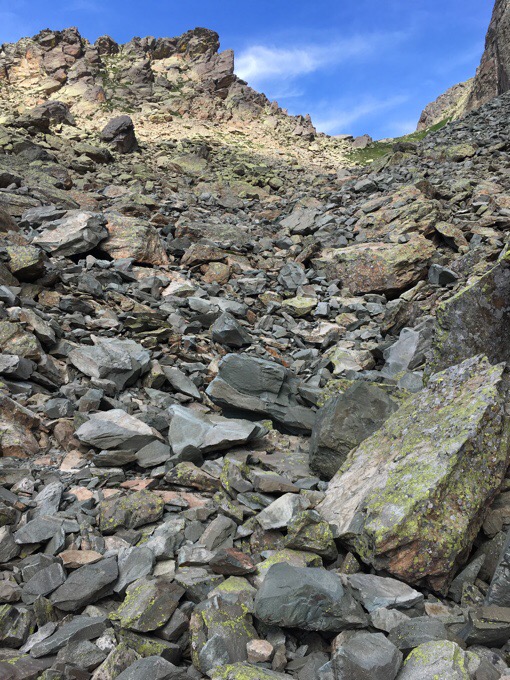 Steep and rocky final stretch up to Col de Peyreget.

I hadn’t planned to make it as far as I did today. I haven’t been paying attention to the times in the book all that much, and have just been doing what feels natural. I found myself unexpectedly landing at a refuge once I got to the top of the col and realized how close I was. What a view! 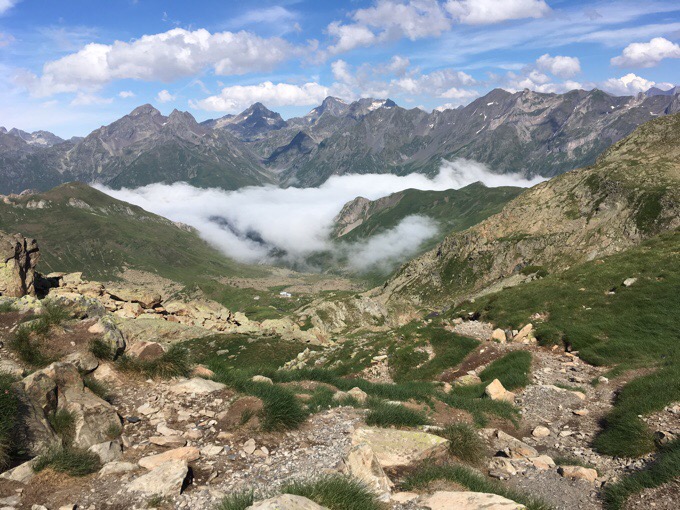 Notice the Refuge de Pombie, the small white dot in the center.

I don’t plan to eat at the refuges, but like that they are there to sleep in if weather is really foul. The rest of this leg looks to be clear weather thankfully, so I shouldn’t need to sleep in a refuge. 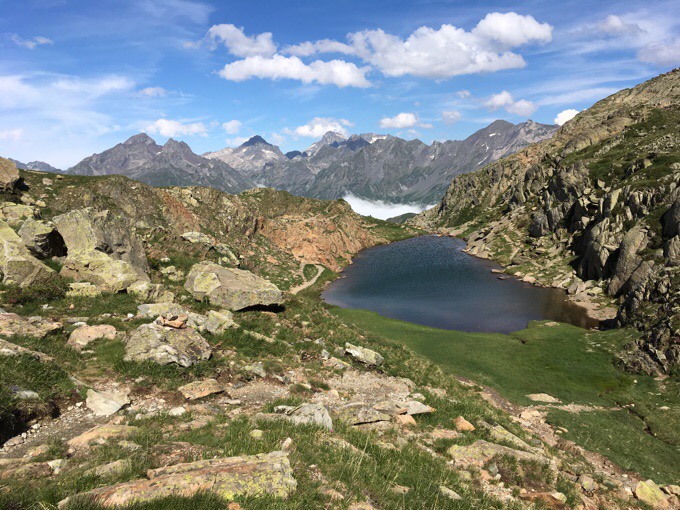 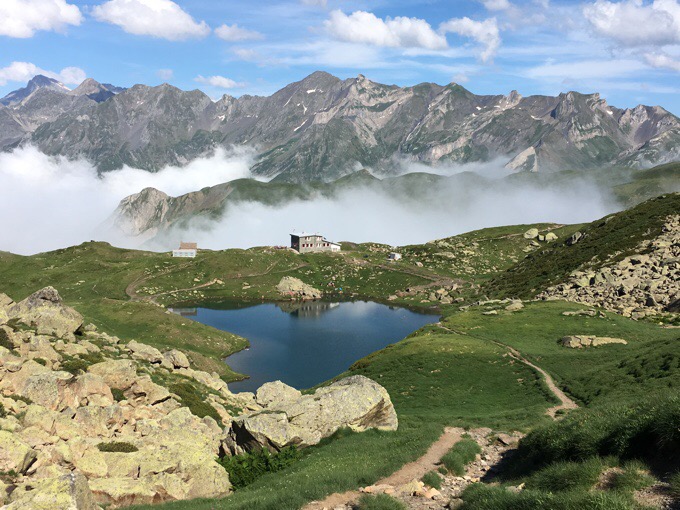 What a setting for a refuge.

This one has 48 beds and 16 places to tent. There was no charge to tent, so I found a private spot, and it worked out great. It is nice to have a toilet at camp. The fog has been rolling in and out all evening. I was able to get a good shot of the view where I am. When I first arrived, I heard the incredible sound of rockfall from the huge wall of a mountain in my view. At the time, the fog was too thick to see it fall, but it was an impressive sound! 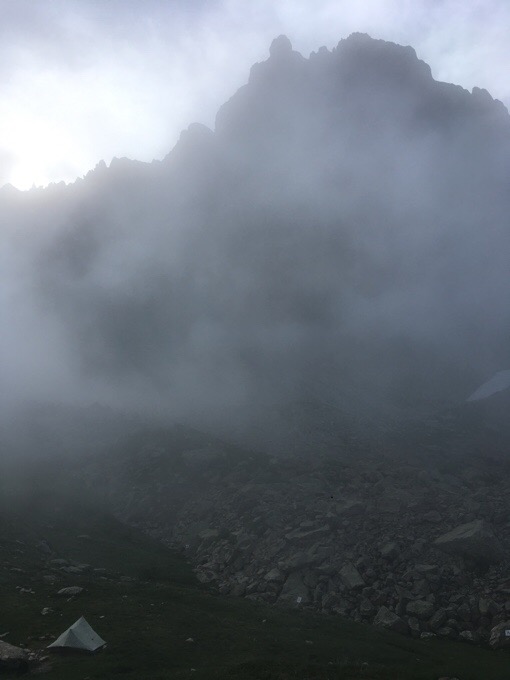 I’m hoping for a full night of sleep tonight. Many people have expressed interest in hiking in the Pyrenees now that they are seeing its beauty. I want to give a warning that it is NOT flat. There is definitely work that goes into those views. For me, it’s totally worth it, but for anyone looking for a relaxing stroll with little exertion and great scenery, you’ll be in for a shock. Just fair warning. No rain or wind expected and I don’t hear any bells!…famous last words… 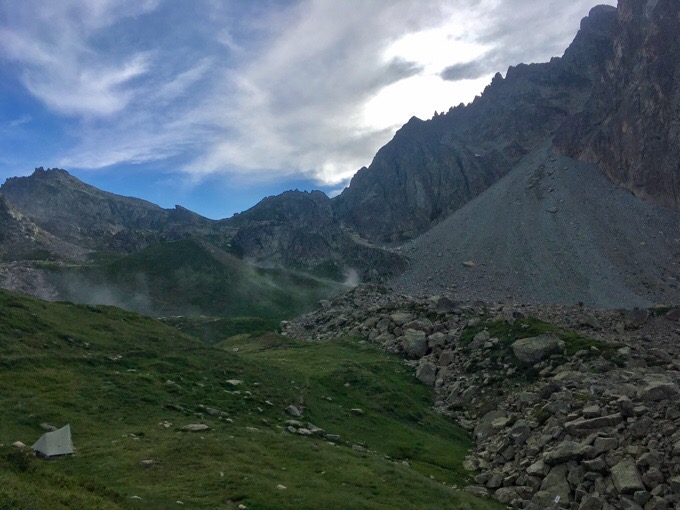