Day 1: Straight To The Point

I was up early at 5:15am to ensure that I got to my train on time to the start of the trail. I took public transit to the Geneva train station, and from there it is a 2hr train ride to the start of the GR5. There were low lying clouds most of the ride, but by the time I arrived at 9am, they had mostly lifted. The two hour ride was ridiculous, because the train went all they way around the lake because there isn’t current transit on the side I was on in the direction I needed to go. 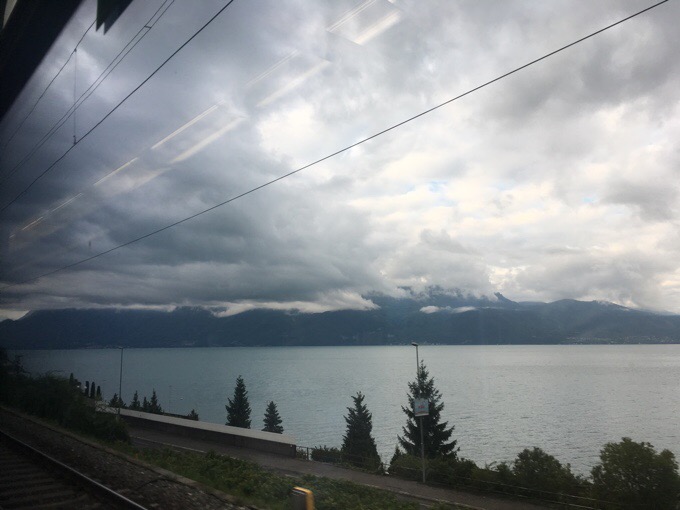 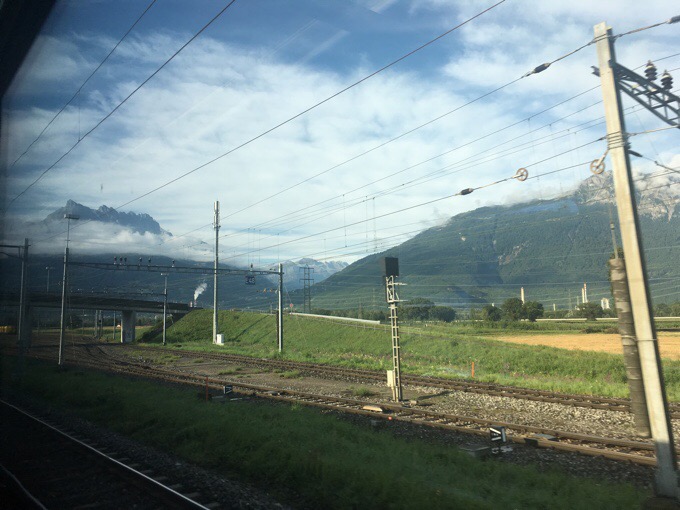 St Gingolph is one of two of the starts of the GR5. As I mentioned in my last post, the St Gingolph starting point is the more direct and steep one for those that don’t feel the need to ease into the hike. Since I just came out of the Pyrenees, I was conditioned enough to do the most direct route. Notice the new yellow shoes (cheapest price I got online of the same La Sportiva Bushido that I use). I forgot to put my gaiters on today, but had a brand new pair of my green/blue Dirty Girl Gaiters in my box and am exited to have them again. 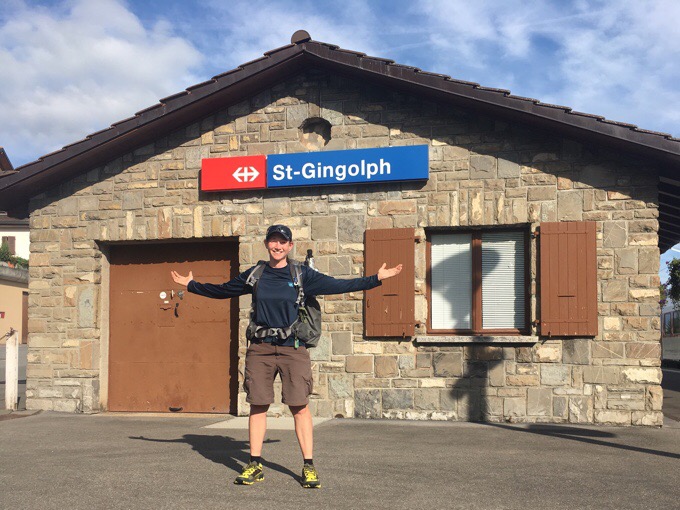 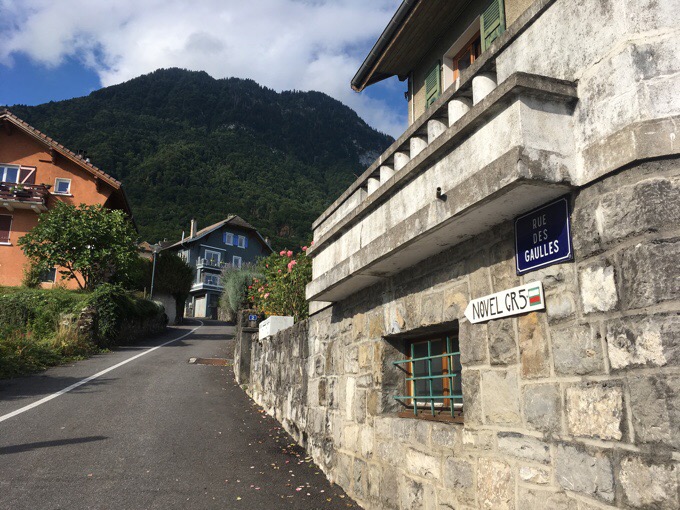 Over 11mi/18km, there was 6135ft/1870m of ascent and 4020ft/1225m of descent. Most of the ascent was the first half of the day. I was tired from lack of sleep staying up too late and then waking so early this morning, but physically the climb went by quicker than expected. A lot of it was on a wide gravel track or asphalt. Since that terrain gave little variety in how I stepped, I did feel it pulling on my achilles some. 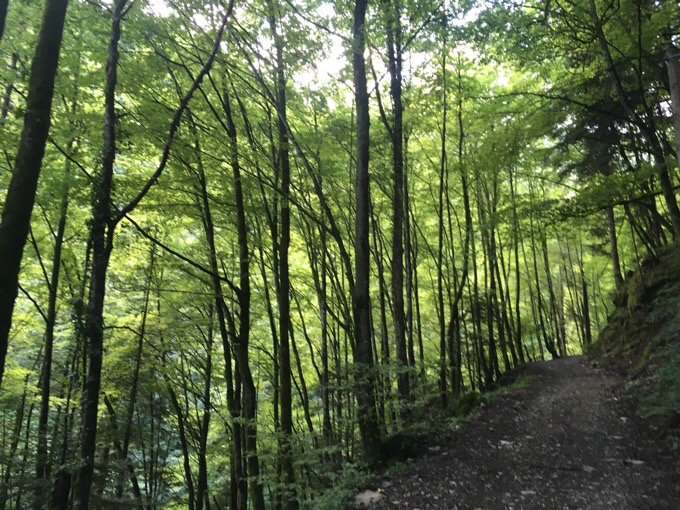 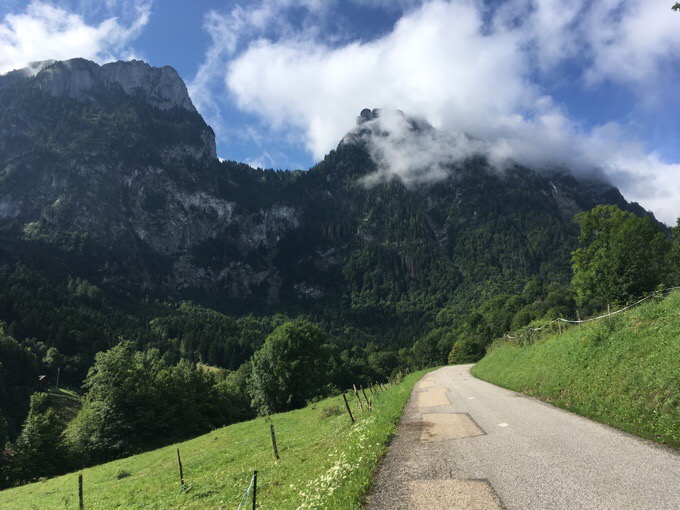 I immediately enjoyed it! The air is that cool crisp mountain air that you feel in your lungs when you breath in deeply. I hit the small village of Novel a couple hours in. 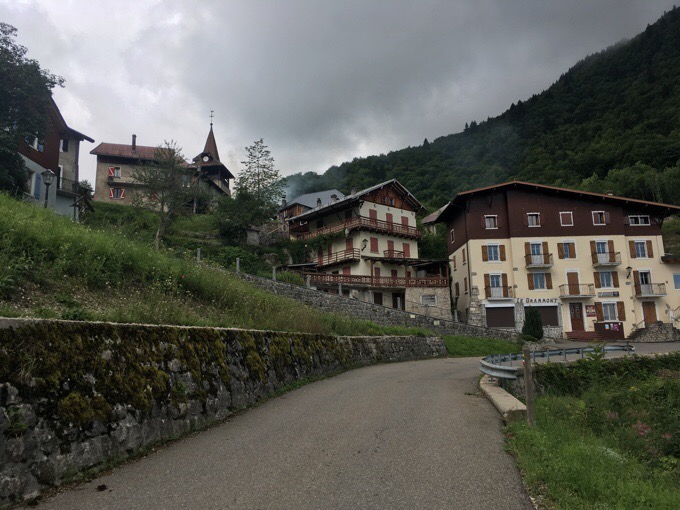 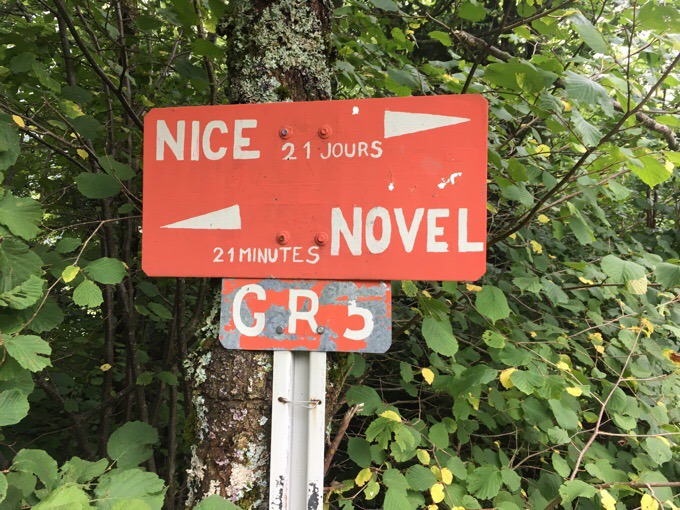 Unexpectedly, there was some low hanging fog that didn’t lift up top. 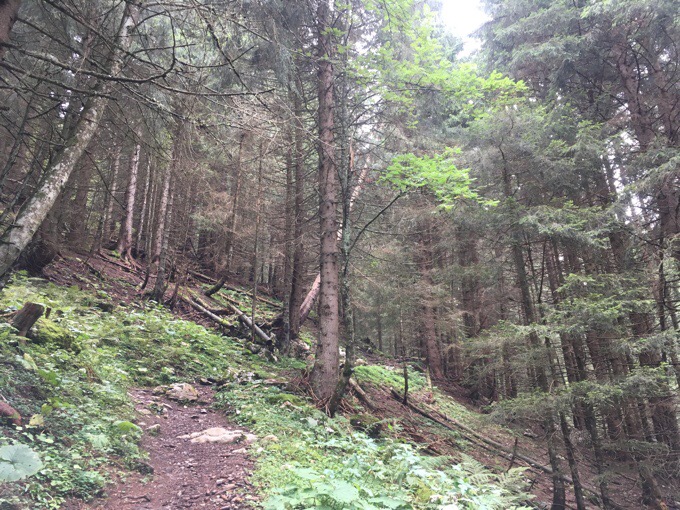 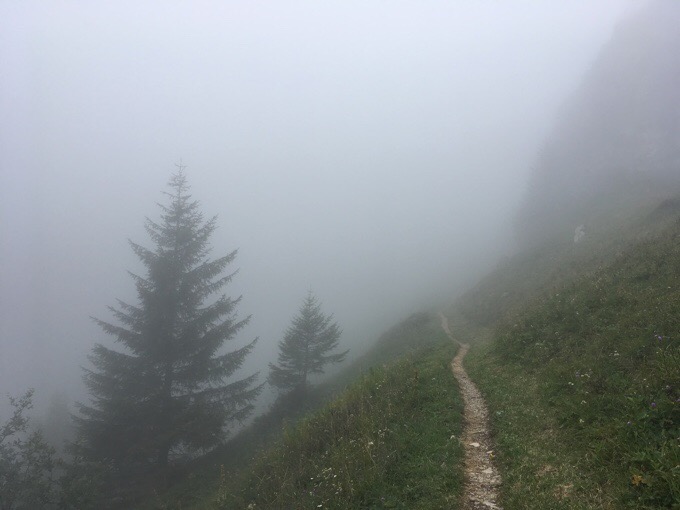 It was chilly at lunch, so I ate in a chalet that was quite rustic, but served its purpose of sheltering me from damp cold fog while I ate. Another couple doing the first half of the GR5 was leaving as I arrived and took my picture for me. 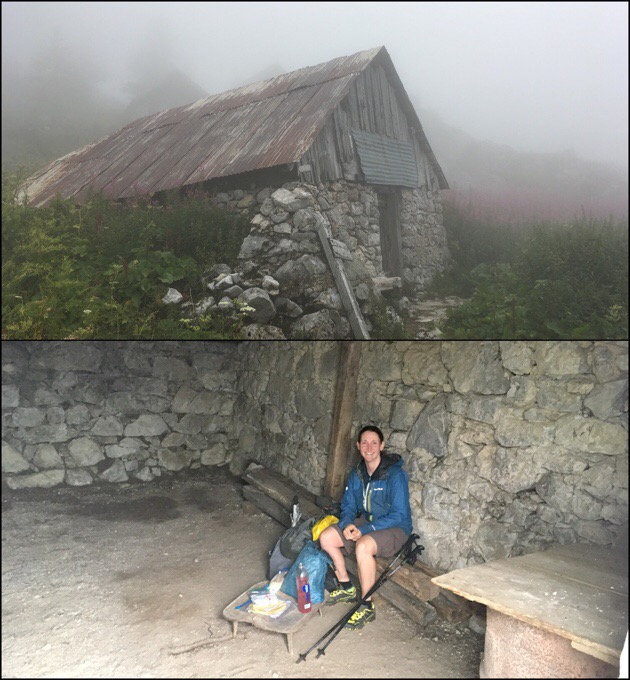 Many people were out once I approached the Col de Bise. I saw large hiking groups and families as there was a refuge and easy access in the valley below the col. 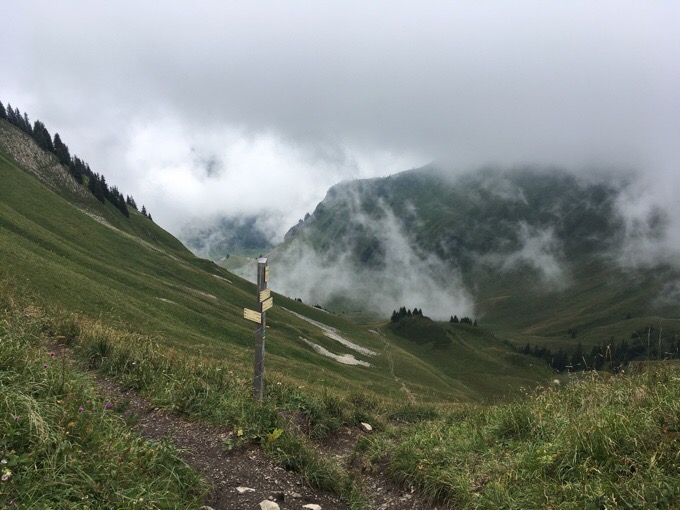 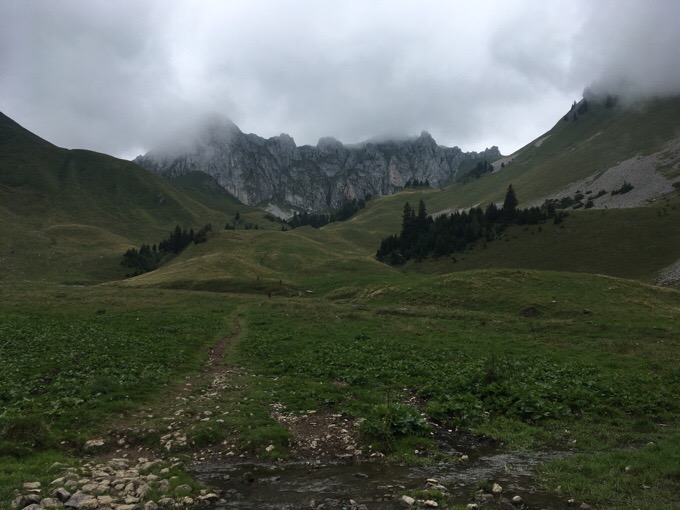 Looking back up at Col de Bise once in the valley. 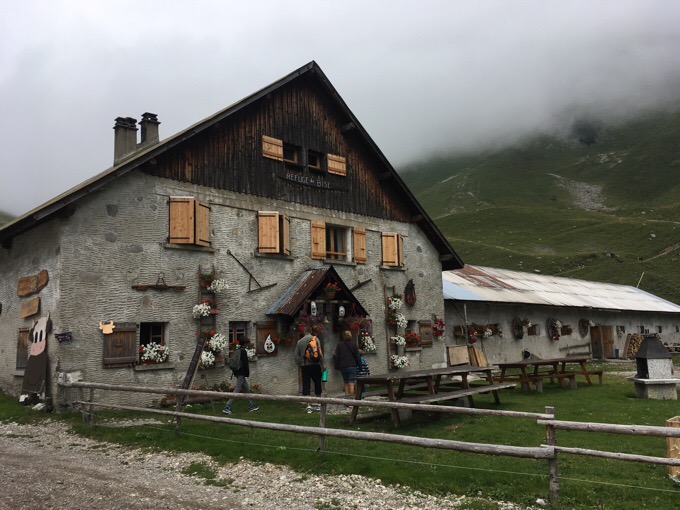 Refuge in the valley.

The scenery was nothing spectacular just yet. I’m sure I missed a good chunk of the effect due to fog, but it’s gaining elevation and getting to the point quickly. I found the hiking to be relaxing and enjoyed it quite a bit. I had one more pass, Pas de la Bosse, and then down the valley to end at a very busy ski village, La Chapelle d’Abondance. 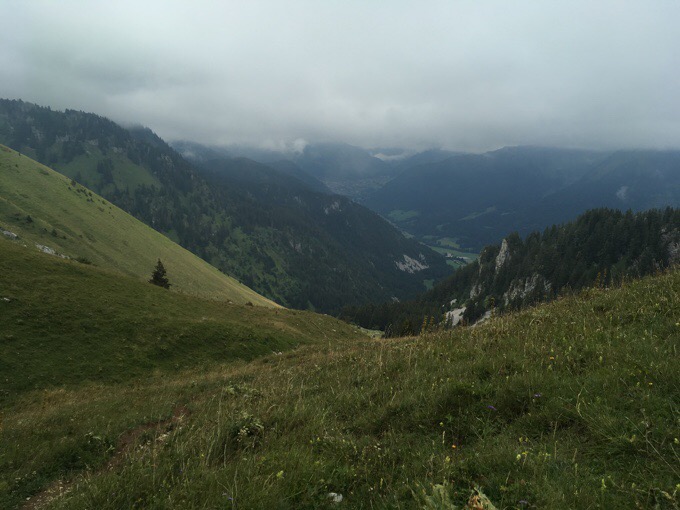 As I arrived, I was torn on what to do. I have four more days before I meet my friends in Chamonix, but I’m already ahead of schedule. I messaged with them to see if maybe I could hike further over the next four days and hitch back to Chamonix. Well, I jinxed myself by doing that. The weather seemed to change to be more like rain than fog. I checked, and it had changed a lot since I checked it yesterday. Just like the Pyrenees, the weather can hit sudden and strong and be quite isolated. Now it says steady cold rain until noonish tomorrow and then it will absolutely dump the next day. 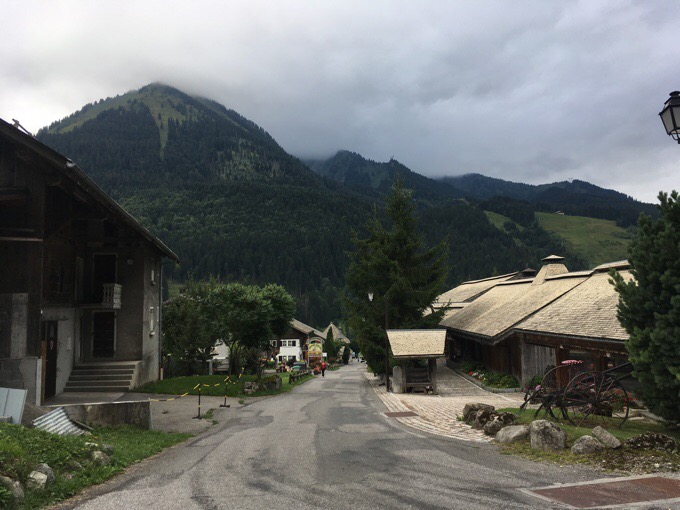 Change of plans. It’s so convenient that there are a ton of options for accommodation out here. Similar to the Pyrenees, the guidebook tries to end each day at a village or refuge. Today, it’s a village. I’d planned to walk through and set up my tent somewhere after the village. It started to rain a bit while I was in town, and that was just the nudge I needed to commit to a room in a gite/hostel. After looking around a bit, I found a cheap one that includes breakfast for €30/$33. I can’t even figure out the name of it, but it’s centralized and somehow no one is here. It seems to be in transition and is a bit rough around the edges, but it has wifi and a somewhat clean bed, so it is good enough for me. All other places I checked were double or triple that price. I have the women’s dorm room all to myself too. I think there are a couple men staying down the hall. 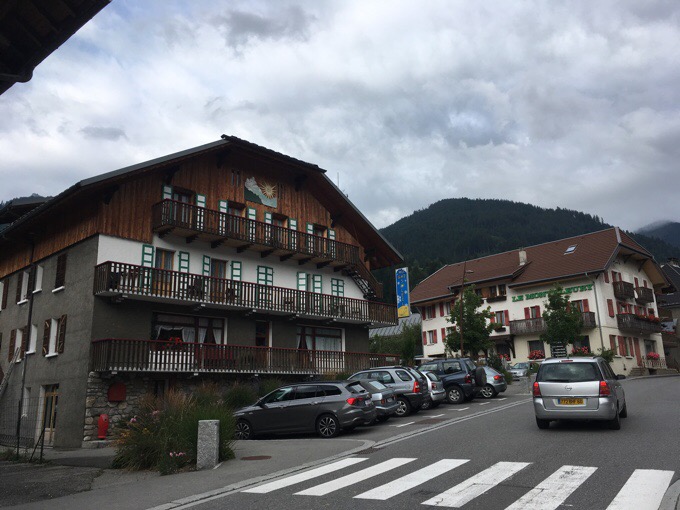 Home for the night.

I even got a big burger and fries for a great price right across the street. Yep, this European hiking with villages and refuges comes in handy when the weather turns. 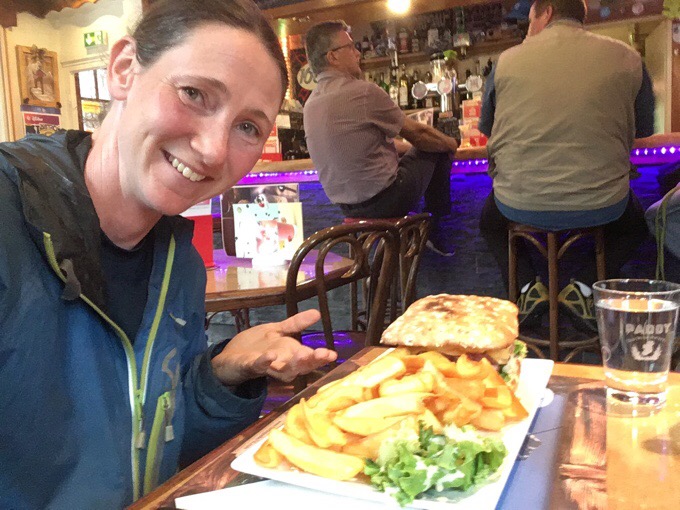 My plan is to let the rain pass in the morning and then book it to the refuge at the end of the day tomorrow where I may need to zero the next day to wait out the downpour. I’m fortunate more of this didn’t happen in the Pyrenees, so I’m due. If I can avoid hiking in cold rain, I will! I don’t know how I ever hiked the Great Divide Trail with how wet and cold it could be. I’ve gotten so soft since then, ha! 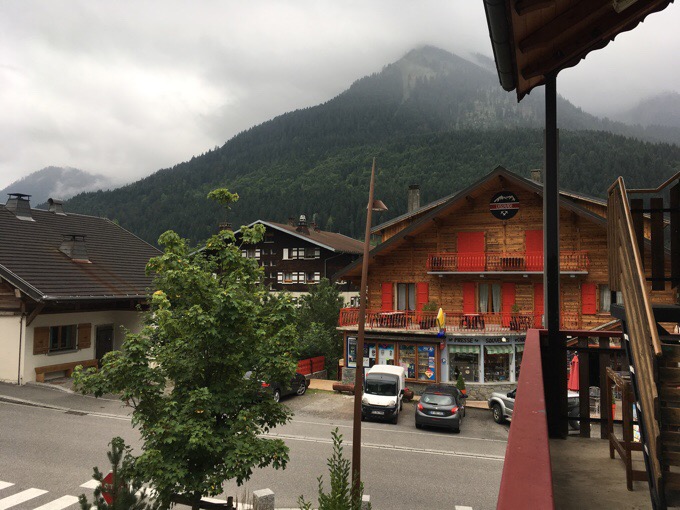 View from my balcony.

So, a nice first day for the GR5. I now have a guidebook with times and estimated mileage, yay! Well, I did kinda get used to not knowing or caring how many miles I actually hiked. It felt puny to look at today and seen it was just 11mi/18km, but once I include the elevation and know I took a 2hr train ride before starting, it felt more complete. It’s not raining now, but should be in the morning…it better be after all this rearranging!