Day 11: A Day Of Three Valleys

No one snored last night! It was the quietest dozen of sleepers ever, whew! However, I was awake seemingly every hour. It was super stuffy in the room with all the windows closed and I just kept waking up. I couldn’t stay asleep. It rained hard at 11pm with wind, lightning, and thunder so loud it shook the building. I seriously love that this inside option is available out here when needed. As forecasted, there was a dense fog early in the morning, but I knew it would hopefully clear. I set off at 7:30am realizing most everyone else were probably leaving around 8am. It gave me good space from the groups heading out.

A side note for those of you that may have noticed, and look at my tracking point on my Where’s Wired tab. I forgot to press my location this morning, and remembered about 30mins into the day, so it wasn’t exactly right. I headed out into fog that looked to hopefully lift. Fog is pretty cool in the mornings sometimes if it doesn’t completely cover everything. 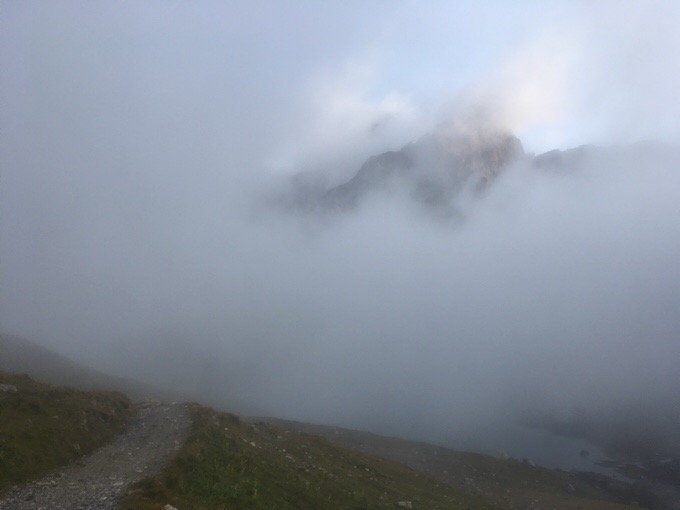 I’m still on the GR55 high level variant of the GR5 that most people choose to do. I totally recommend this option, but yesterday was totally the highlight. I dropped down to Lac de Vaches, which has a rock walkway right through the middle. With the fog lifting behind me, I couldn’t help but try to get a shot of it. It was so much cooler in person. 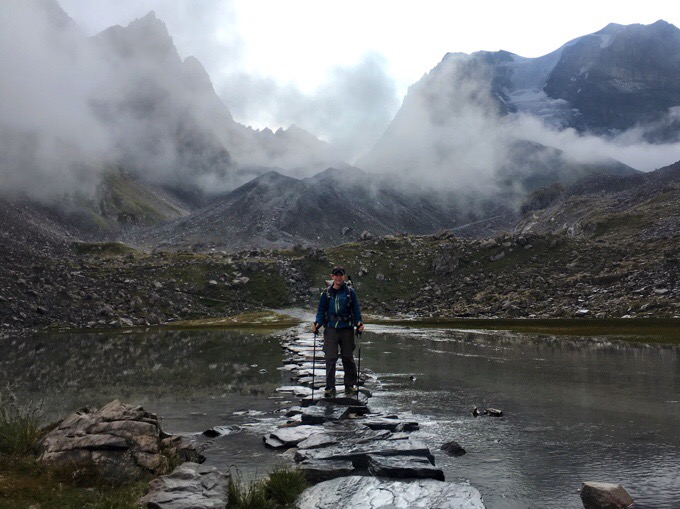 After that was the drop past some ski areas down to the villages of Les Fontanettes and Pralognan. It cleared some, but then the fog was pretty thick as I dipped down, but I was glad it was just in a forested area and I wasn’t missing much scenery. 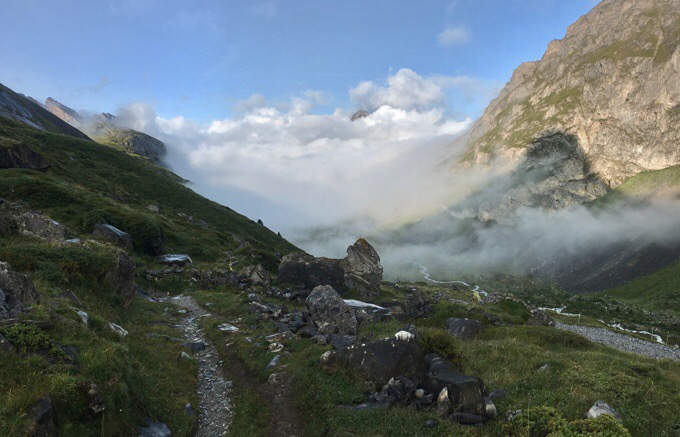 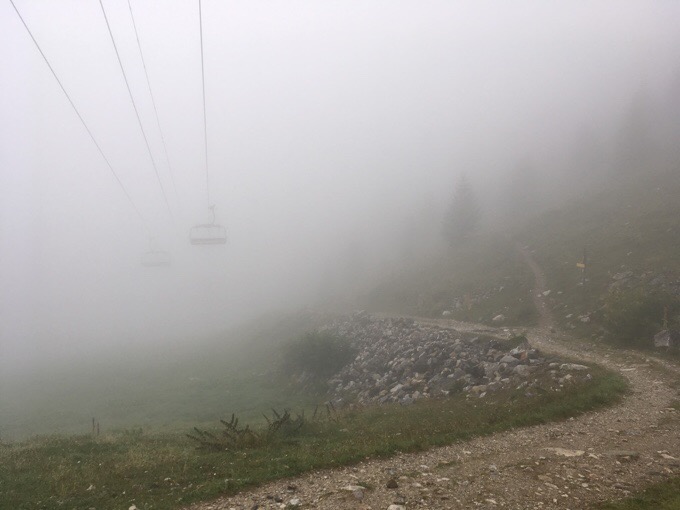 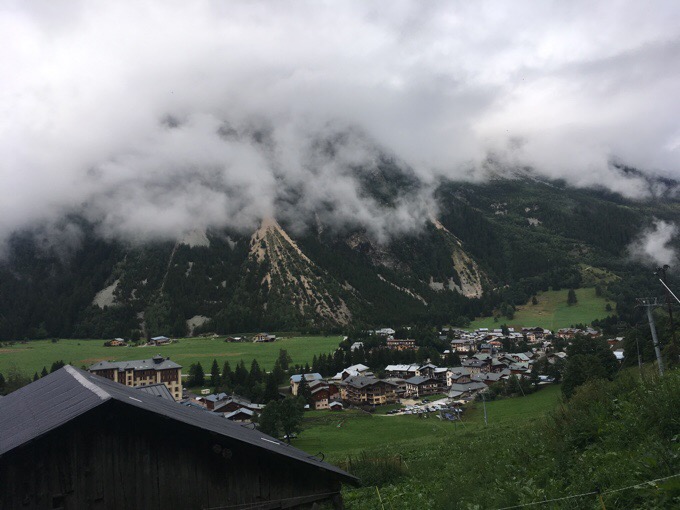 From the outskirts of Pralognan, I had hours of gradual climbing up a valley to my highest point on this trail. Since I was already high, I didn’t have a crazy amount to ascend, but the hours just dragged for me today. I did have to stop for 30mins to post yesterday’s blog since I figured that was my best reception I’d be getting until the end of the day. I’ve been spoiled on the GR5 with good enough reception some nights to post from my tent. It’s so much more convenient when that happens. 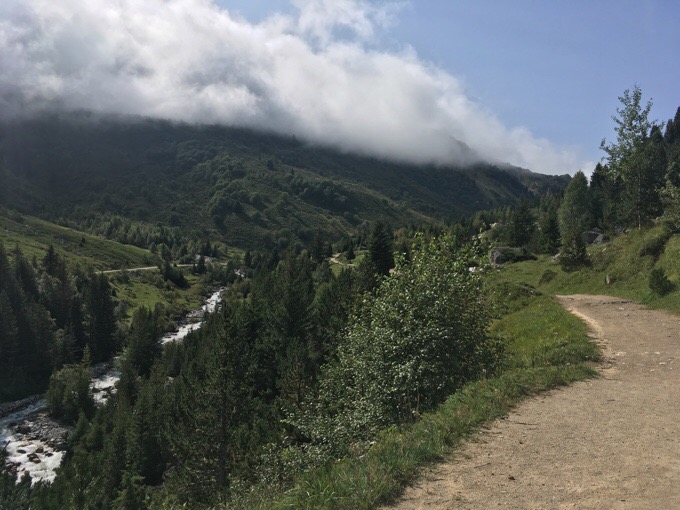 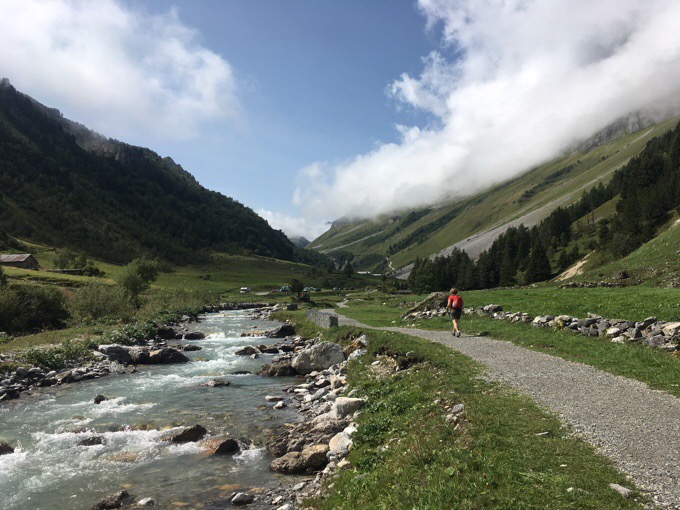 Clouds hugged the mountains most of the day.

My body felt like sludge, and I’m hoping to be over this physical crumminess hump tomorrow. I promised myself I’d do my best to not hike later than 5pm today with how I was feeling. It was a nice cool day, and the ascent was pleasant. My mind and body were just not into it. I could have laid down easily all day. 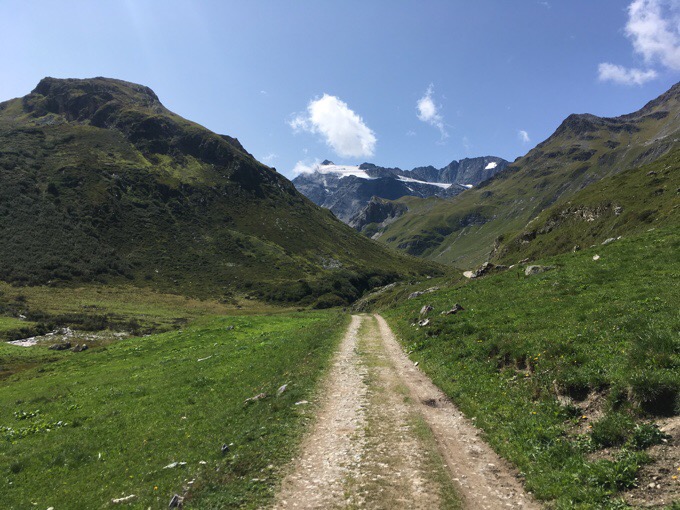 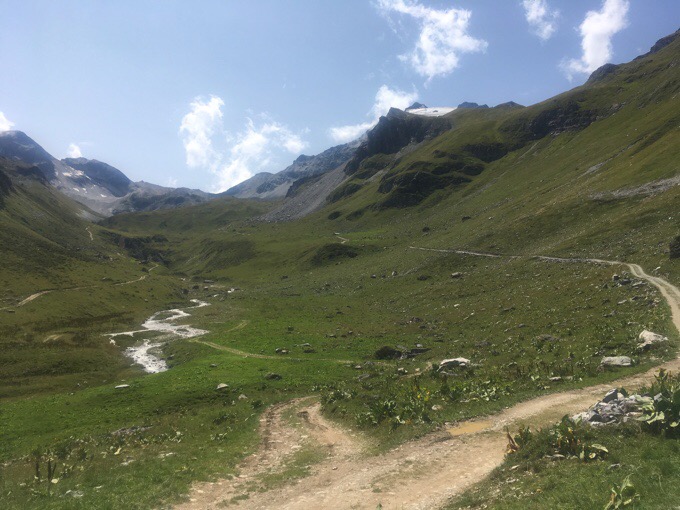 On the way up, the terrain got more barren and rocky. There was an area where people built up cairns as art covering a very wide section of land. This also happened at a point yesterday, but didn’t make the photo cut. There’s varying feelings about this kind of thing along trails. Many believe nature is there to be enjoyed the way it is and that this breaks with the ideas of Leave No Trace. Personally, I can understand the idea behind it and that people aren’t meaning any harm, but it feels unnatural and awkward when I see things like this. I almost feel bad for the land like it wasn’t bothering anyone and now it’s been molded as if it wasn’t already enough the way it was. 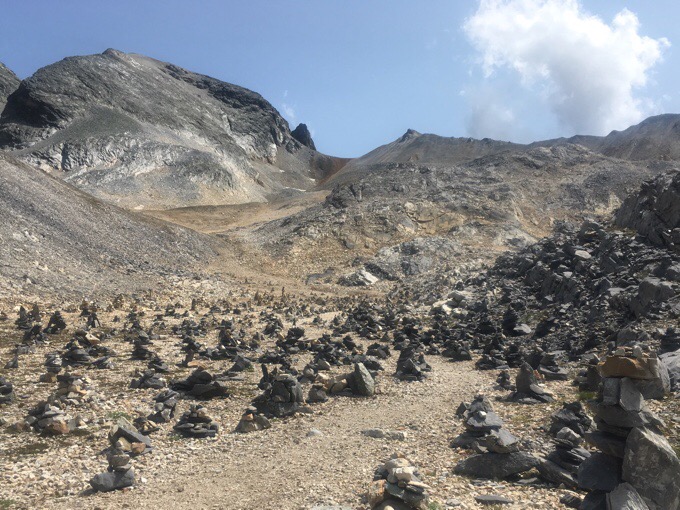 Cairns as far as the eye can see. 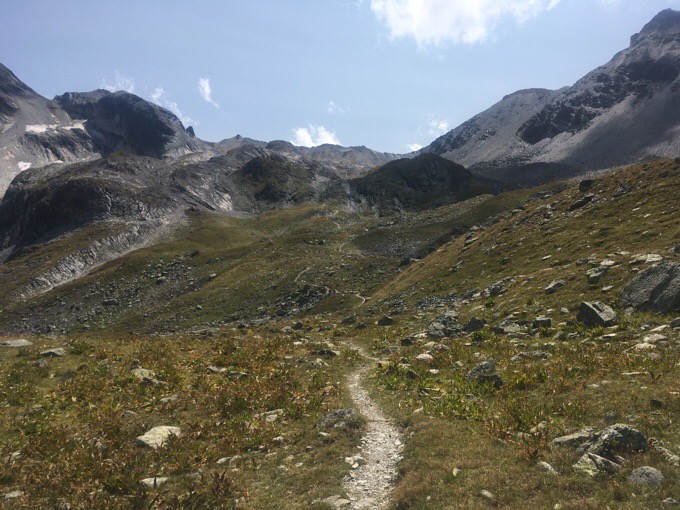 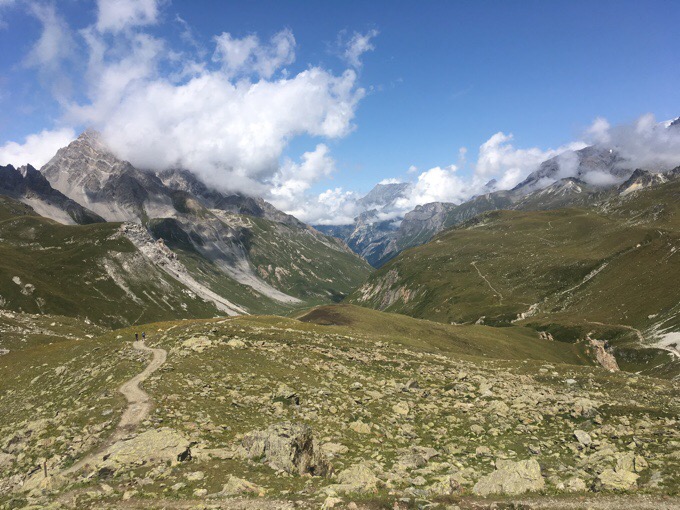 Looking back as I climb up.

I made it to the highest point on my route, the Col de Chavière at 9173ft/2796m and had it all to myself. I saw a many people on the way up and some on the way down. 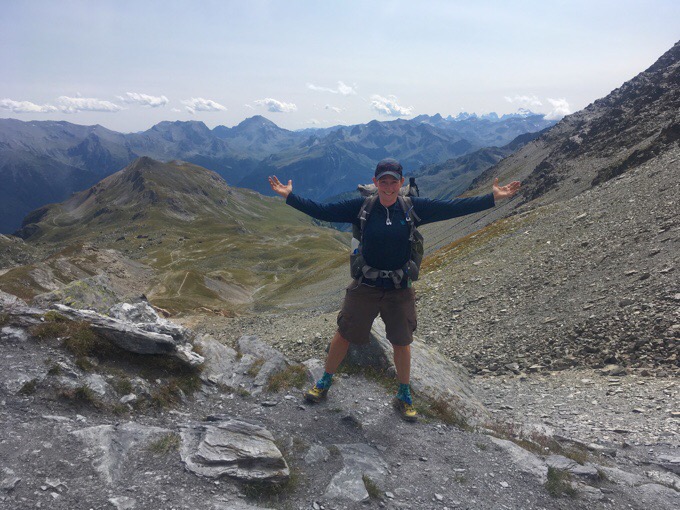 The descent was steep at first and then got more relaxed as it wound down into the valley. I passed some small communities or homes as the trail drops all the way down to the village of Modane. 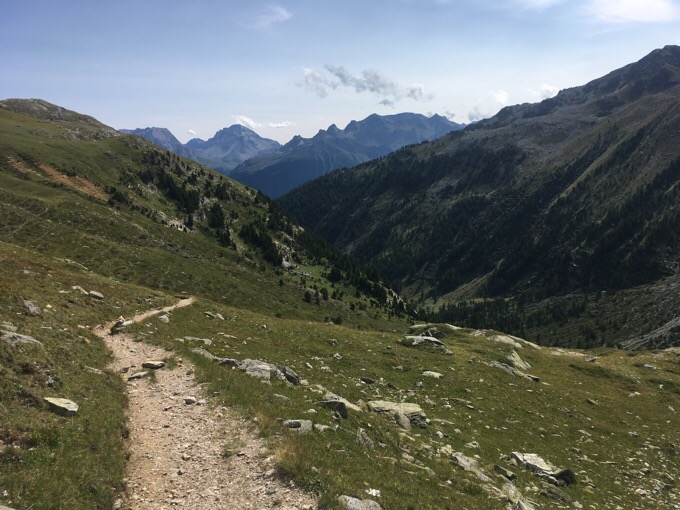 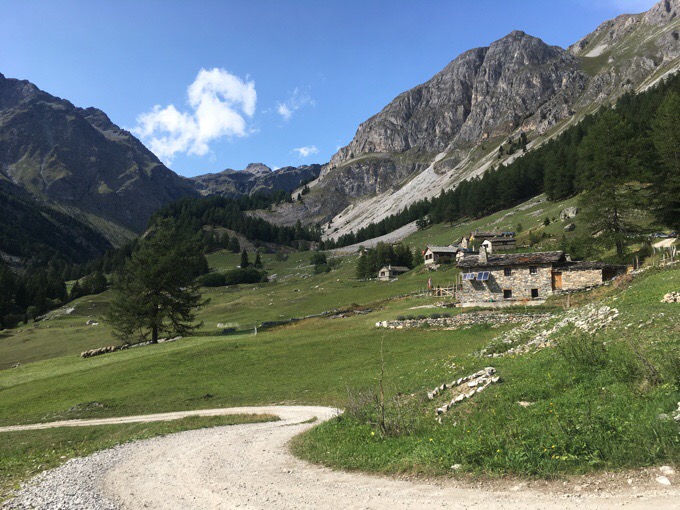 Looking back on the valley I descended after passing the small village of Polset.

I exited the Vanoise National Park and was more free with camping options if I could find a spot. I wanted to stop by 5pm, but could tell by the terrain and elevation, I was running out of options. I didn’t want to get stuck and have to hike another hour to the group camping in Modane. I really wanted to camp alone and stop early (5pm). I came to the last open field before the steep descent started, and saw a home next to the trail and across from the open field. I asked them if I could camp in the open field and they were totally happy to let me do that, whew! It was a great view looking down at the valley I’ll drop into tomorrow and the mountains across the way. A great spot to finish the day! 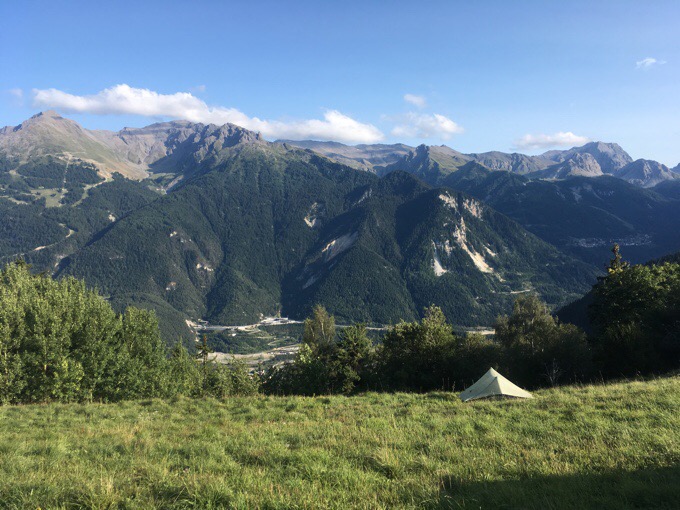 It’s cold enough that I don’t want to take my hands out of my sleeping bag and I have my beanie on. There’s a slight breeze, but the forecast looks good for low wind and no precipitation. I think I’ll sleep really well in the brisk air. I also picked this spot because I have enough reception to post the blog. Yay, one less chore to do tomorrow!