Day 13: Stepping Into Italy and History

It was a cold, but good night of sleep. I started off with my gloves and beanie on as I dipped into a shaded valley some before climbing up a bit. I had a route decision to make today. There were two possible variants recommended over the general GR5 that went into a valley. I couldn’t take both, so I had to choose one over the other. The one I chose (GR5B) added a couple hours of hiking, but went higher, into Italy a bit, and passed some WWI bunkers and buildings. The one I didn’t choose (GR5C) didn’t add time, but parallels the route into the next major town and tries to give views. From what I read, it only has views for the first few hours and then the rest is back in the valley, so I went with the GR5B. 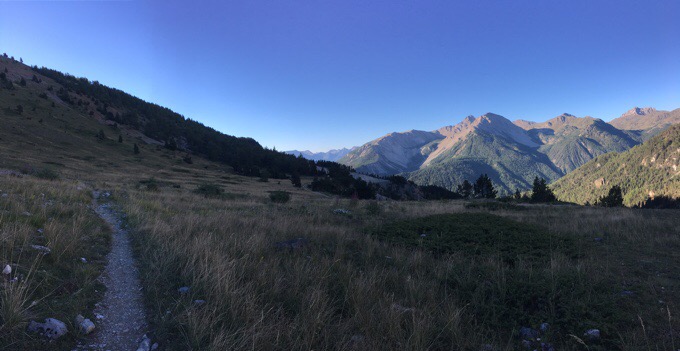 I get frustrated with all the comparing and reading and calculating sometimes with the options, but that’s me, and I don’t like having to plan things. I want someone to make those decisions and I just execute the plan laid out for me. Hey, that’s one reason why I love substitute teaching. No planning! Just execute what’s already planned out. 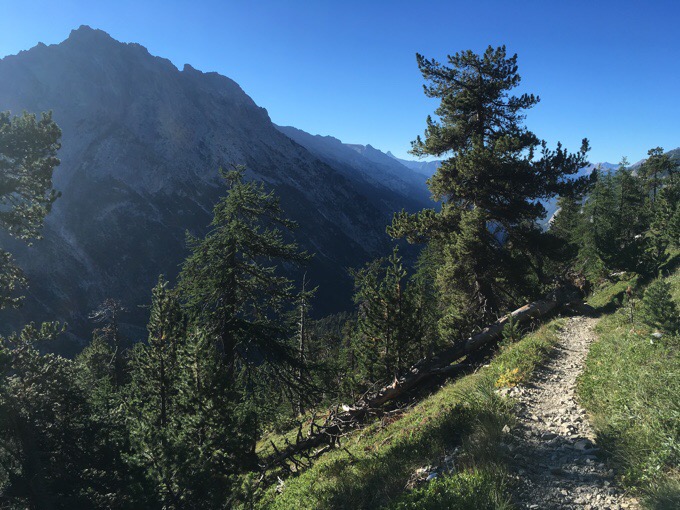 I was happy with my choice. The morning was on the GR5B, which first went down into a valley and then climbed up to nice views. The landscape was much different and more rocky. 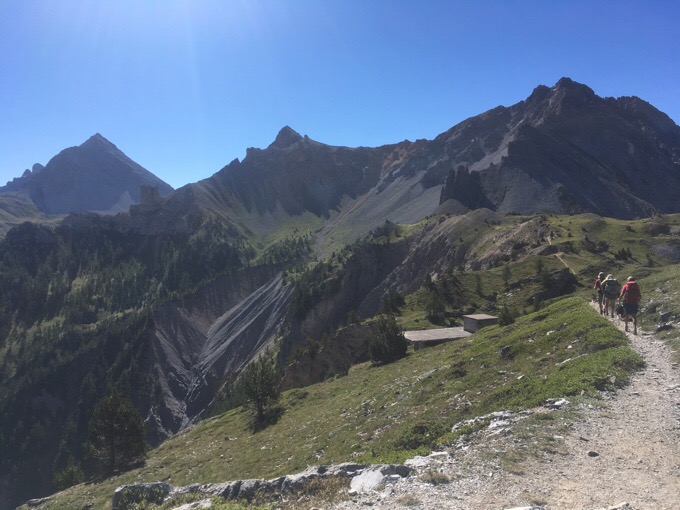 Notice the building below.

This must be a popular day hike because tons of groups were on the trail. All were much older. I’m guessing that’s because it had a lot of WWI bunkers and buildings. That was just surreal to see. 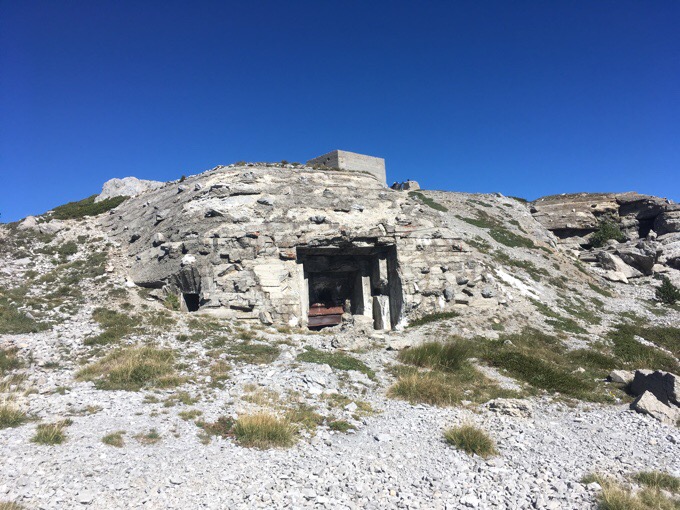 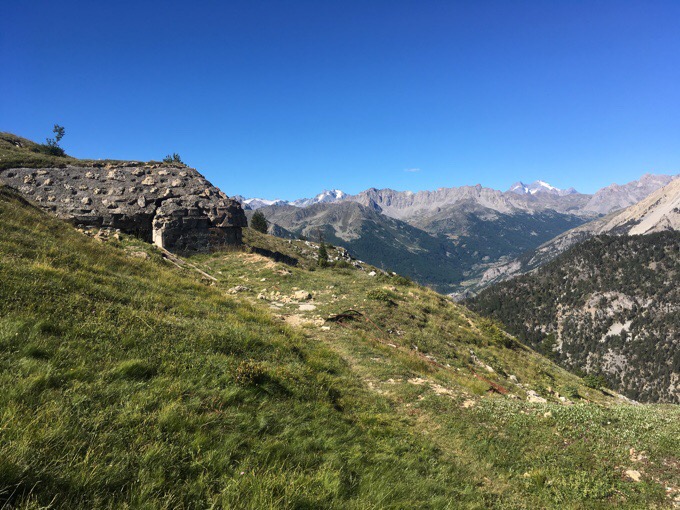 I walked into one of the bunkers. It was cold and echoed. There was a long concrete tunnel that seemed to lead to the other side, but I got too freaked out to walk all the way through it. There were little indented spaces like tiny rooms along the tunnel too. I got creeped out quick! 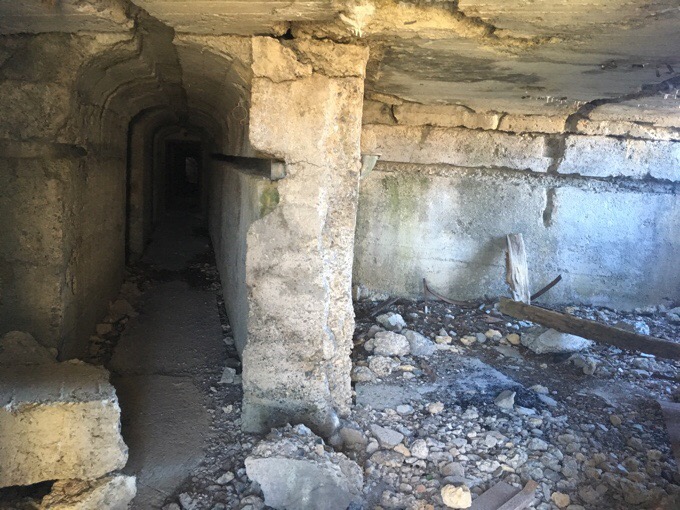 As I was walking, the trail turned into Italy for a bit. My first time in Italy! I could see down to the town of Bardoneccia, Italy for quite awhile as the trail followed the cirque around the town. 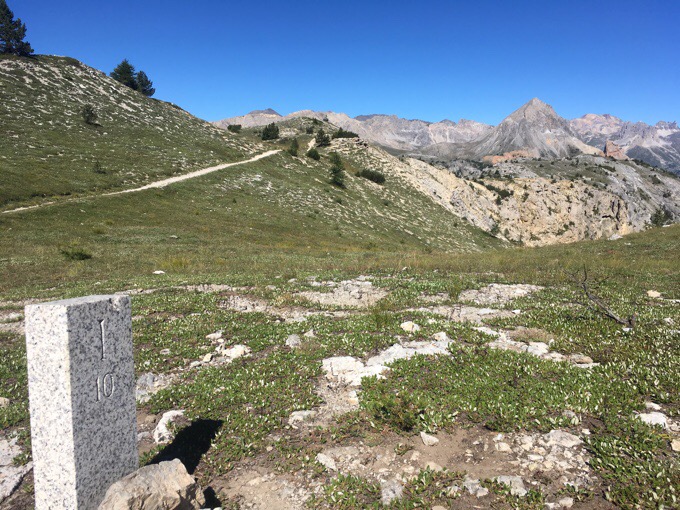 I was surprised I didn’t have service to post yesterday’s blog all morning. Then, just before lunch, I got enough bars and plopped down for 40mins to get stuff done. I’ve been spoiled having service in my tent and it does interrupt the day to have to stop wherever the service is. 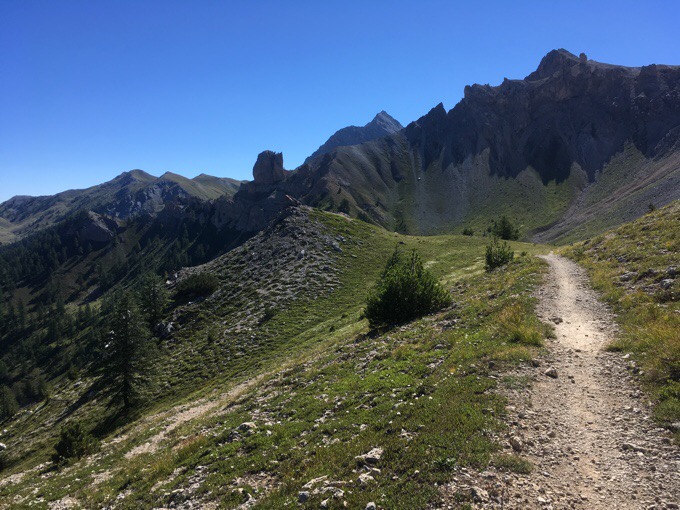 While I was doing that, all 40+ people I’d waded through walked by…I had to hike back through them when I finished and needed to go a bit further to my lunch destination. They were nice and understanding about it. Even though most didn’t speak English, we built up a bit of rapport after seeing each other three times along the trail. 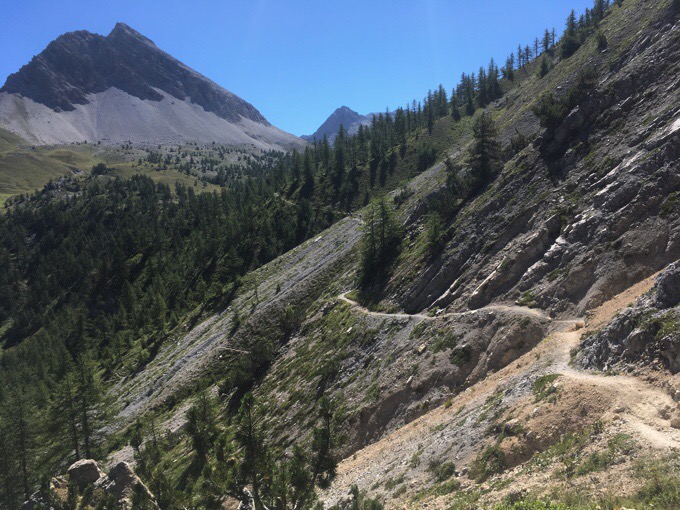 At lunch at Col de Pertusa, I was able to get a photo on one of the border markers. It’s tough to see, but there’s a capital I at the bottom under the big plus symbol. The other side had the F and the floral symbol, which I do associate with France. Not sure what the plus sign is for. 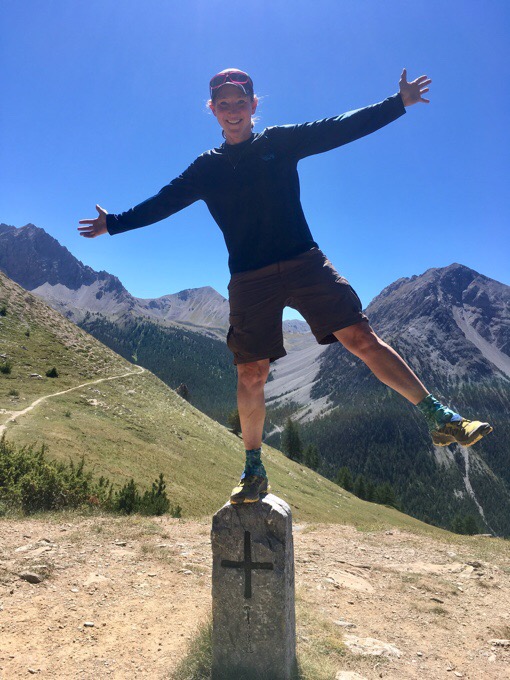 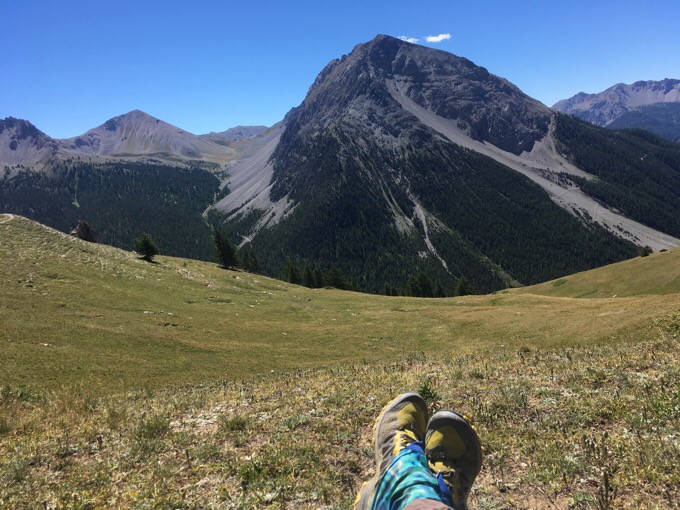 After lunch, I headed downhill to reconnect with the GR5. I will mention that there is water on the GR5B variant that isn’t mentioned in the guidebook. It’s an obvious stream and fountain next to the trail as it switchbacks below some old buildings just after Col de Pertusa. 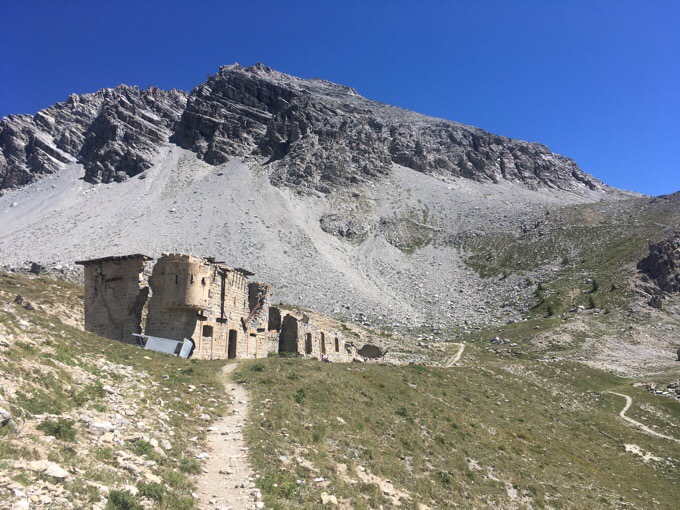 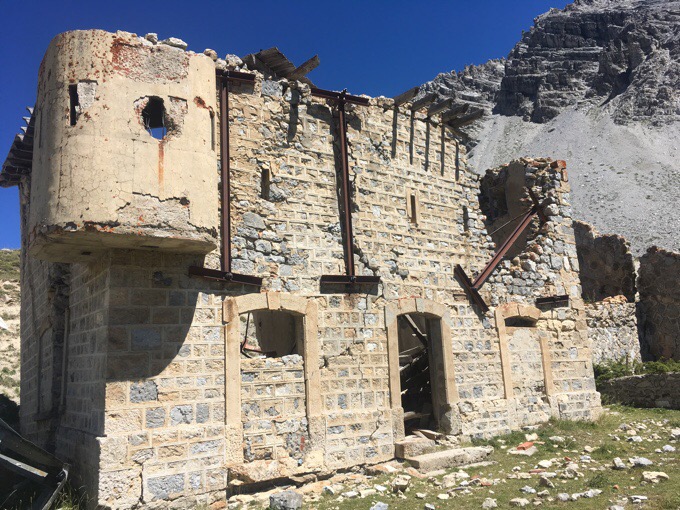 Once back on the GR5 and though the wooded drop in a valley, I had two cols to go over (Col de Dormillouse and Col de la Lauze) that took a couple hours. 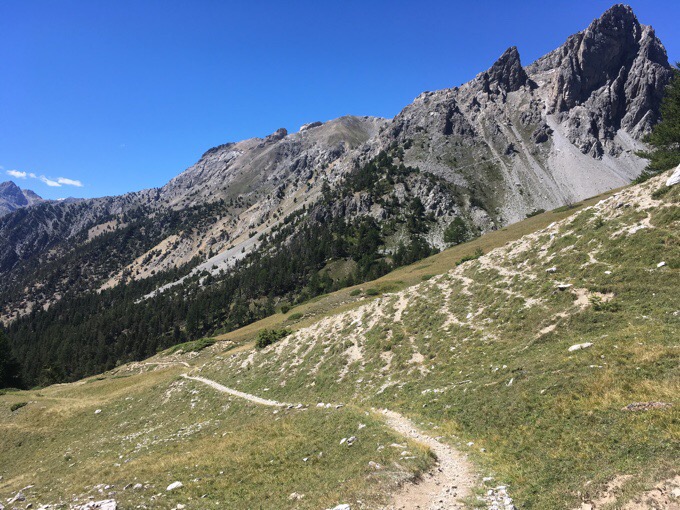 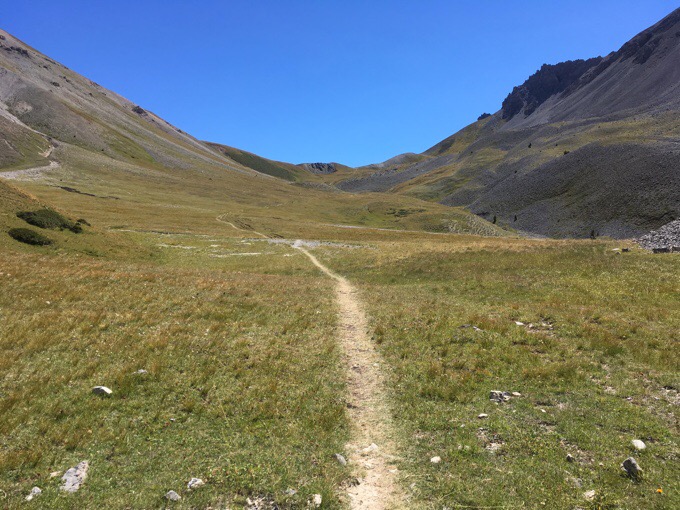 I didn’t see anyone until I got over both cols. Views were expansive and quite nice. 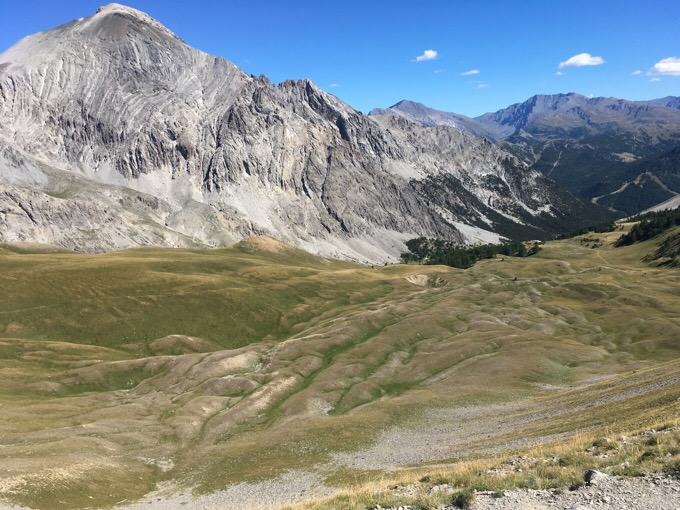 Then, after Col de la Lauze I dropped down to a ski area and lots of day hikers heading down. The trail was thankfully a wide track for people to spread out. Again, most people were Italian, and I wasn’t going to mention this yesterday, but today confirmed that they tend to be much louder and bolder than any of the day hikers I’ve overlapped with in Spain or France. Maybe it’s just the area I’m in, but two days in a row it just wasn’t the calm and relaxed vibe I’ve seen with younger day hikers last two months. It reminded me of Americans… 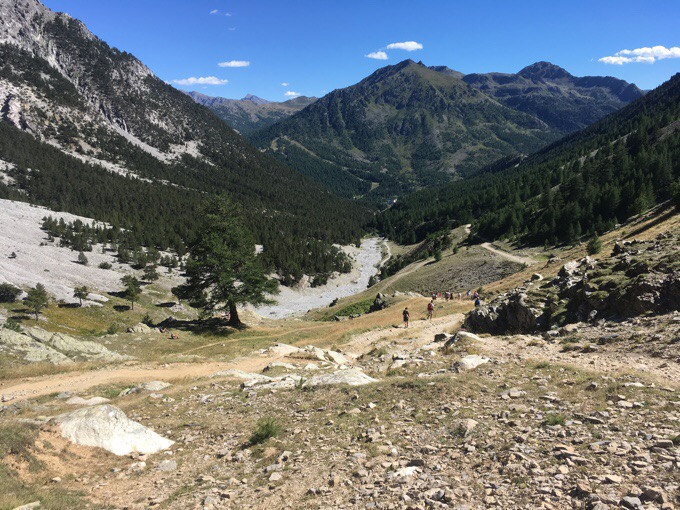 Tomorrow, my plan is to hike into Briançon in the morning and get a nice relaxed nero. I got a bit further than expected today and found myself approaching the town of Montgenèvre before 5pm. I didn’t want to get too close to the next town of Briançon, and it seemed there may not be an ideal spot to stealth camp between the two. I grabbed water from a stream and walked up into the forested area along the track to Montgenèvre. It was just before 5pm, but I think it really was one of the last options if if I didn’t want to get stuck having to hike another hour or more. 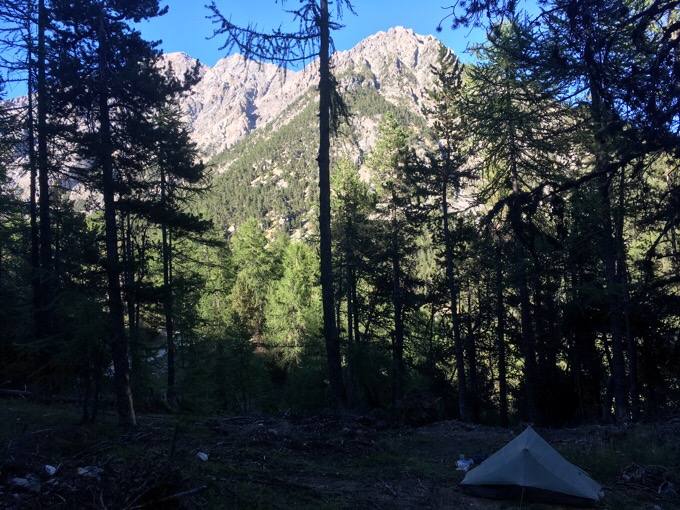 I also had service! Today was the big solar eclipse everyone was waiting to watch back home. It almost goes pretty close to my current home of Portland, OR, but the best place in the whole country to watch was where I was raised in my hometown of Carbondale, IL. Pretty cool! I was happy to be on social media seeing everyone post and I even got to watch the CNN live feed a bit. The best part was that I got to Skype with my sister and nephews. So dang cute! 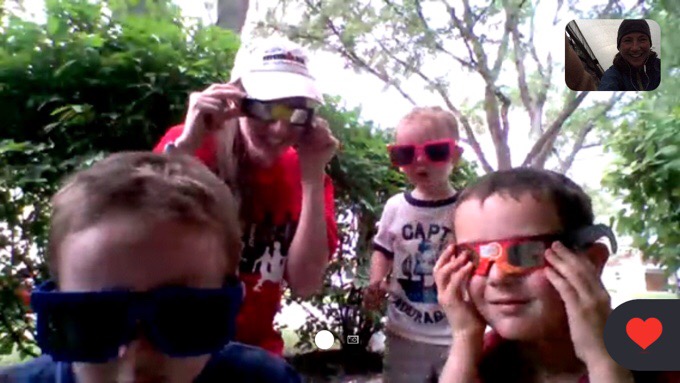 I’ll explain Briançon more tomorrow, but I’m looking forward to spending time there. I am really wanting my own space, so I got a great deal of just $54/€48 total for an Air BnB that will let me check in tomorrow morning, has an actual washer for my clothes, has a (French) breakfast with homemade jam, wifi, and provides a comfy big bed with sheets, towels, and soap. These things have been difficult to find in the gites, and this price beats everything else I’d seen available for a whole lot less. Looking forward to this one! I’m up way too late tonight with all this eclipse stuff, and I’m not even in the US!