It was a great night of sleep in a big bed at the Air BnB I stayed at. I totally recommend that place! Here’s the link. I was awake early, and took a rare morning shower. I usually can’t get motivated to shower early in the morning, but was oddly in the mood. I was out by 8am after another nice French breakfast of bread, croissants, yogurt, jam, juice, and chocolate milk! I really enjoyed the morning walk through Briançon. It was like the town was just waking up with a market just getting started for many blocks. Just seeing all the various cultural specialties and hearing morning salutations among them all was really enjoyable. 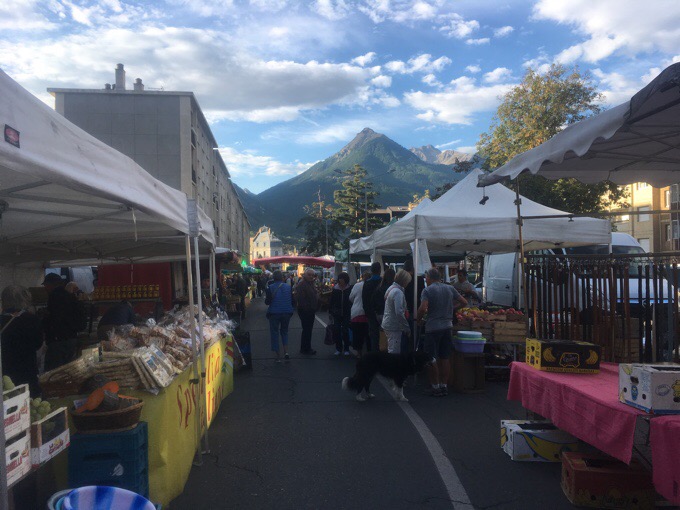 I had warnings that I might not like European hiking because it isn’t as remote, but the novelty of the culture and all these quaint villages are really charming and enjoyable to experience. It’s so different to me from walking through an American town that can often feel jarring and stressful. The villages flow so well with the hike that I feel like it’s more natural than in the US, and even adds to the experience. Once out of Briançon, there was a long winding gravel road through forest that eventually opened up and led up to Col des Ayes. 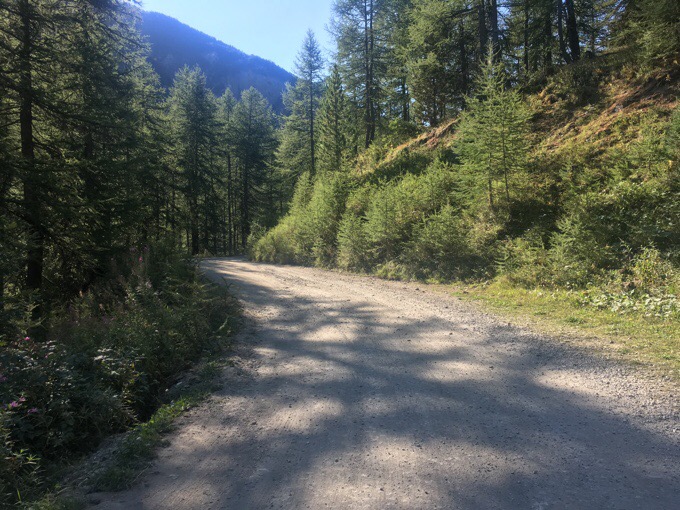 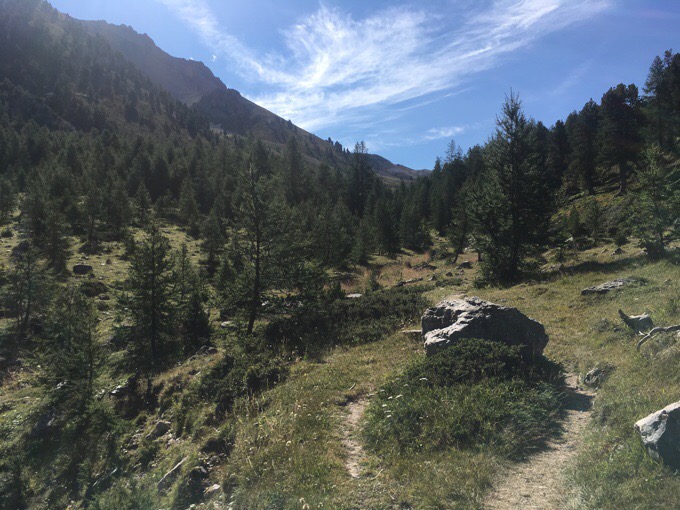 I’m definitely feeling a shift in the feel of the trail now that I’m getting closer to the Mediterranean again. The scenery is visibly less green and the mountains are not as alpine with snow on grey granite. There’s more of a brown and scree appearance with a lot more pine trees. Well, at least today there was. 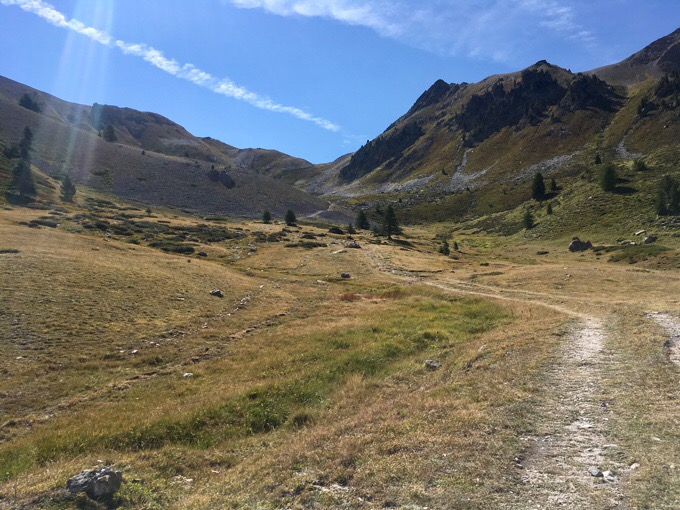 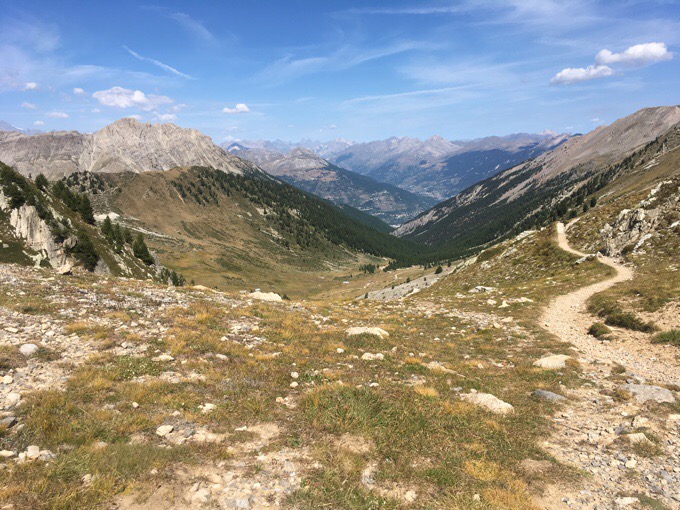 Looking back from Col des Ayes.

I have less than two weeks to the Mediterranean, and there’s still plenty of mountainous terrain all the way to the end. In about a week, I’ll be taking the ending that goes along the GR52, through the really awesome Mercantour National Park that will have some of the best scenery of the whole trip with rugged mountains. Just like the Colorado Rockies, afternoon thundershowers are possible daily from here on out. I got a taste of it today as clouds gathered in the afternoon with possible late afternoon rain in the forecast. 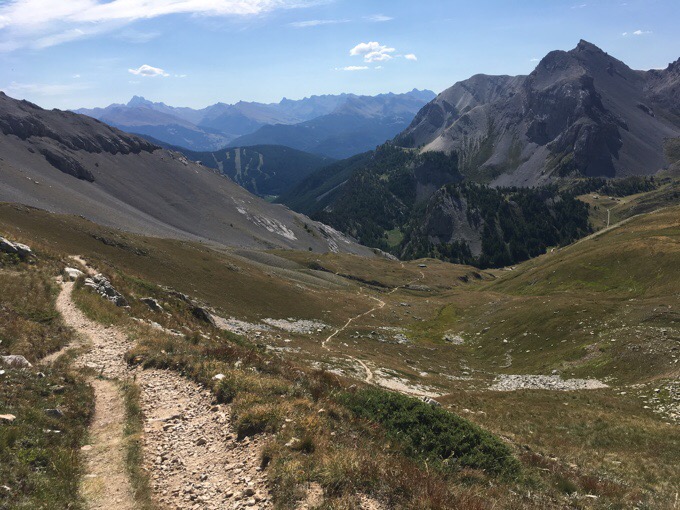 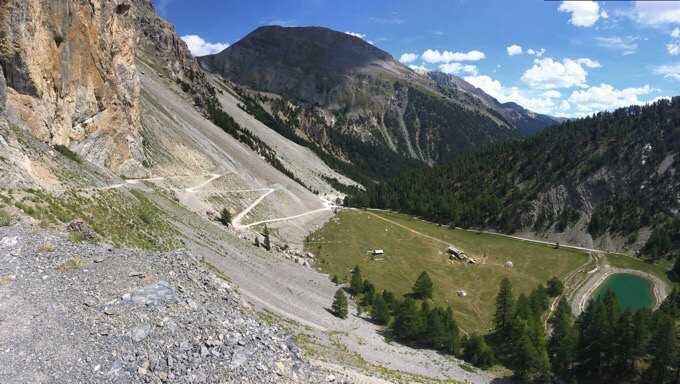 I passed many little campgrounds, villages, and restaurants on the descent after lunch and then into a forest for much of the afternoon that reminded me of hiking on the Continental Divide Trail. 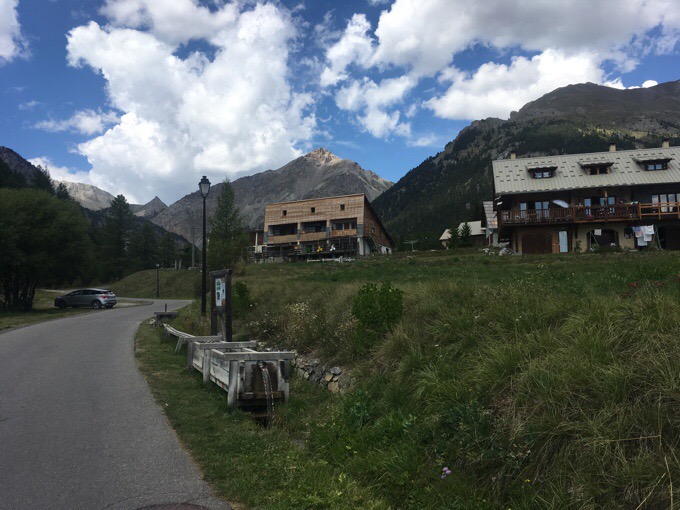 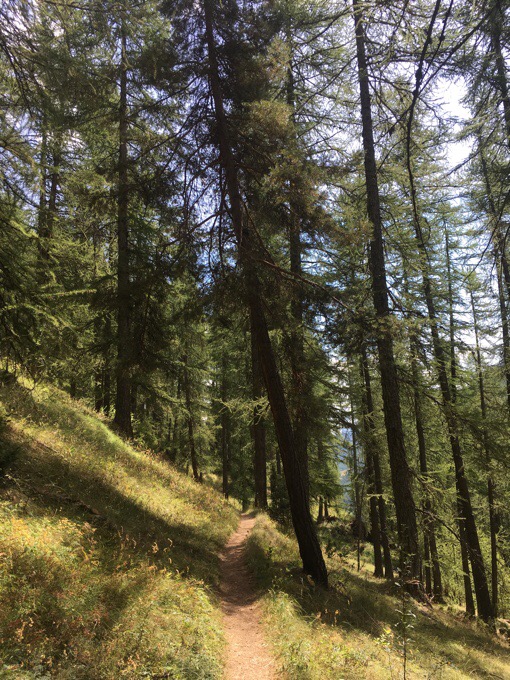 I’ve felt the switch of the trail and also internally as I have a month left before I return home. The trail reminded me of home, and I feel like I’m in the homestretch (though there’s lots more to come!), so I thought of home a lot today. I do love it back in Portland, so I’m excited to go back and really settle in for 5 months or so. Going home to Portland is like a big down comforter to me. Actually, I can’t wait to wear my big hoodies! I’m loving the hiking out here, but I’ll be ready to head home in a month and have my routine and comforts that I really haven’t had enough of over the last year. I was really only home for 2.5 months over the last 15 months by the time I get home. It will be time to hermit! 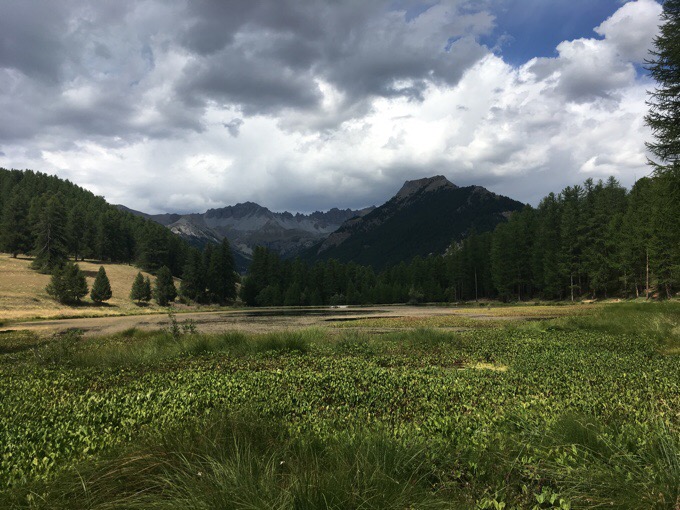 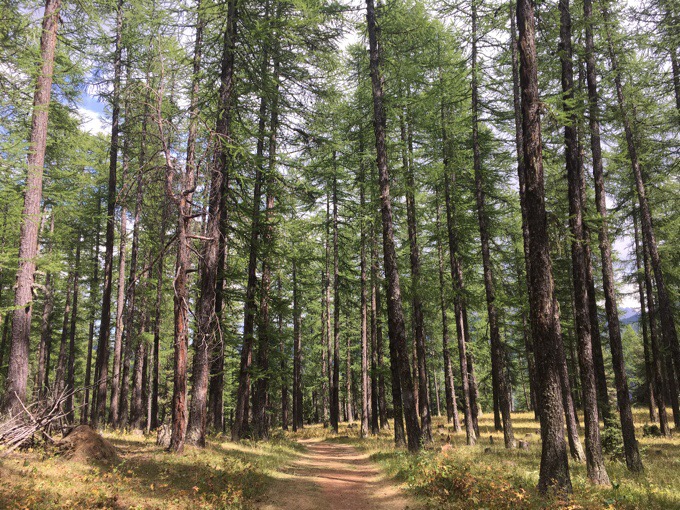 Towards the end of the day today, I got to the impressive Fort Queyras, from 1260. It was really cool to see it up on the rock from all angles as the route went around it. The tour was €10, and I wasn’t interested enough for a full tour, but it was cool. 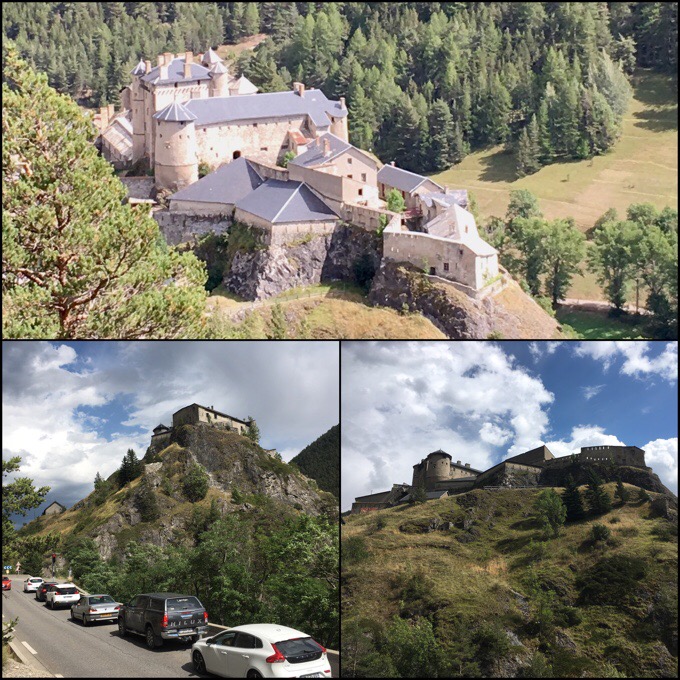 I did however get an ice cream bar since it was quite humid out. That alpine air I’ve felt since arriving in the French Alps was gone after this morning, and I wonder if that will continue. The skies were dark like it might storm, so I looked up the weather again. Nope, still showing light rain possibly for a brief bit. It was 4pm, and I decided to hike on up the steep wooded trail from the valley. Thunder soon started to rumble distantly, but it still felt non threatening, so I told myself to just hike till the planned 5pm, and then look for a spot. 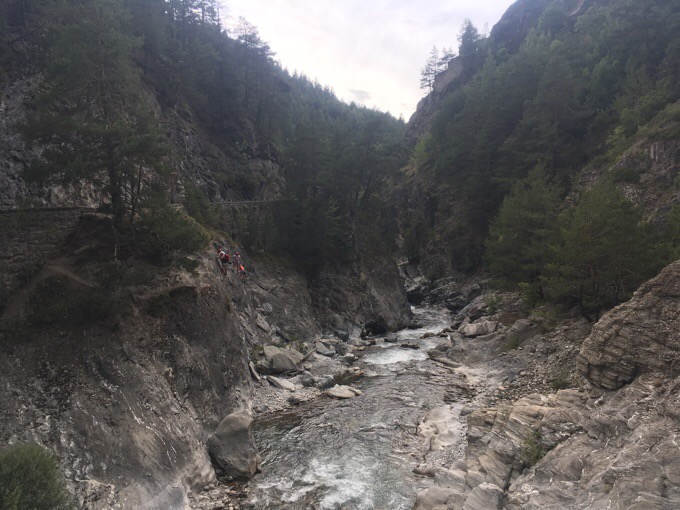 Notice people on the gorge wall. There have been many “Via Ferrata” options for people that seem to be routes with harnesses and ability to clip in and some zip lines.

I found a great spot right after 5pm, and setup. I was soaked in sweat from the humidity and tried to lay my shirt out to dry while I setup the tent. Of course that was when two mountain bikers came flying downhill. Oh well. It was a pretty sweet spot, but sadly just out of range of service to post the blog, so I’ll have to make time for that tomorrow. 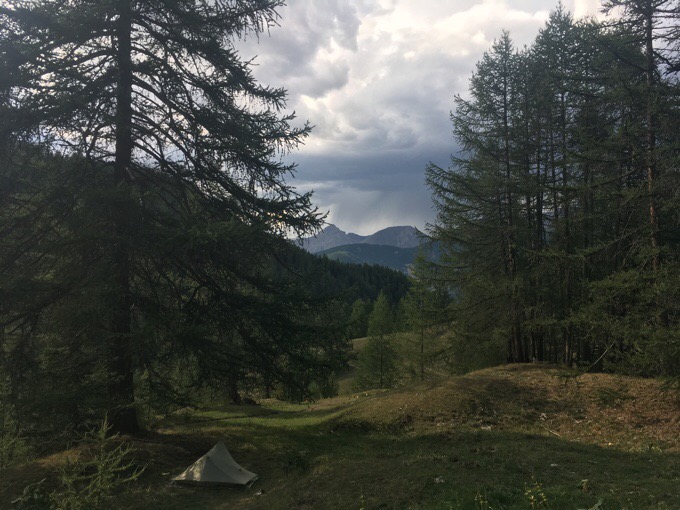 I wasn’t hungry, and was chilled from being sweaty, so I put on my pajamas and did some blogging in my sleeping bag in the tent. The thunder continued to rumble and then the rain came. Good timing! It alternated from light sprinkles to steady rain from 6-7:20pm. It totally lulled me to sleep the first hour! It was unique from any other thunder I’ve  heard. It was like fireworks in the distance going off in different valleys. They would often overlap. One would be mid rumble down one valley and another would randomly go off. There wasn’t any wind at all, so it moved over slowly getting nearer and louder until it moved on. I don’t tend to nap because then I don’t sleep through the night, so we’ll see if that nap messed me up. I don’t think it will. The air is much cooler now and I’m super cozy in my sleeping bag. I had a late dinner after the rain stopped and got to watch an episode of The Crown. Another great day!