It was a great night and I slept all the way through. That rarely happens. The tent was nice and dry when I packed it up, and I was hiking by 7:50am. This was possibly my favorite early morning hiking I’ve done this summer. I had a lot of nice trail that traversed a ridge with mountainous views. It was a cloudy morning, so that added nicely to the scenery as well. 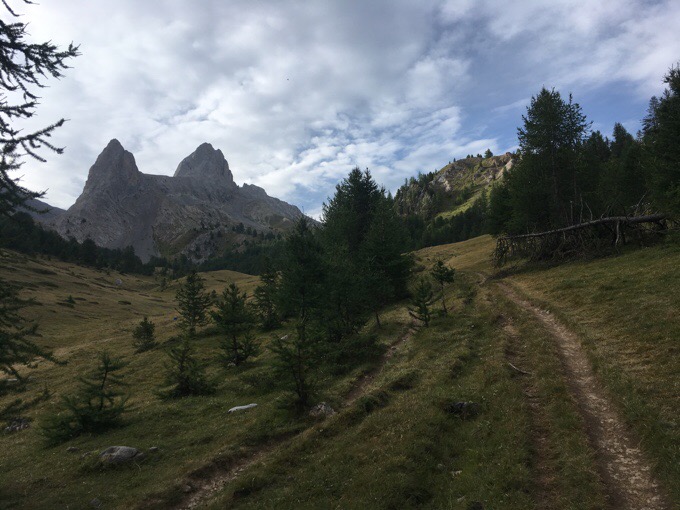 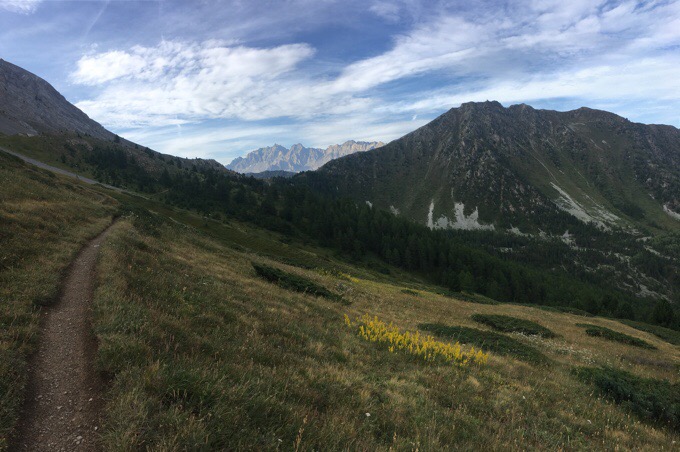 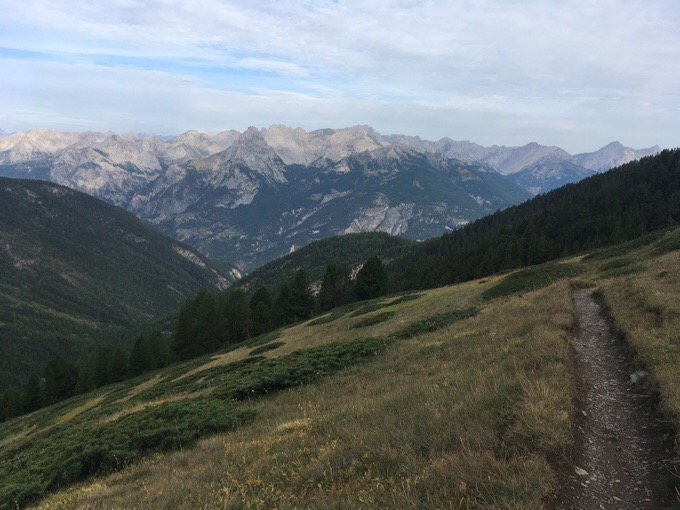 After almost 3hrs, I arrived at the village of Ceillac, known as the woodworking center of the Queyras (the area of the Alps I’m in). Just before reaching the village, I noticed the cutest little playhouse and had to check it out. It was like a dream playhouse. 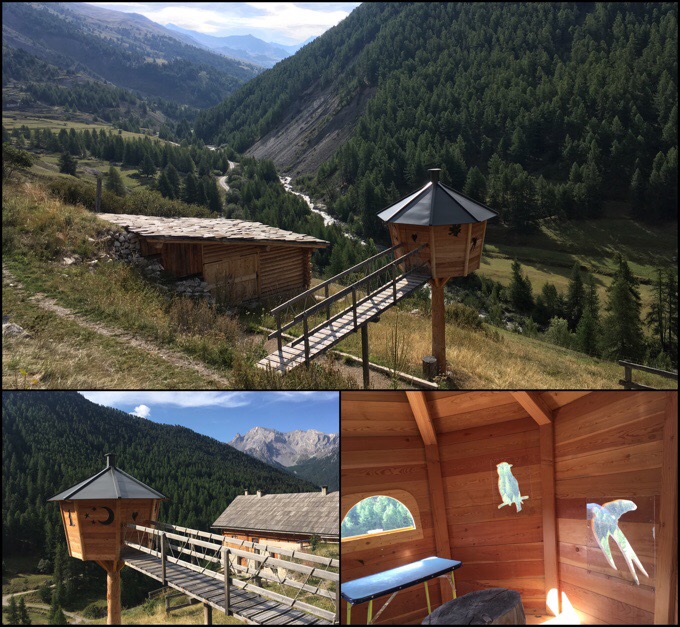 This village is the first one that felt super touristy or contrived. There was a market, but it felt different from the one I was at yesterday in Briançon. It felt like people were there to sell and cater to tourists. Hard to explain, but it felt unnatural. 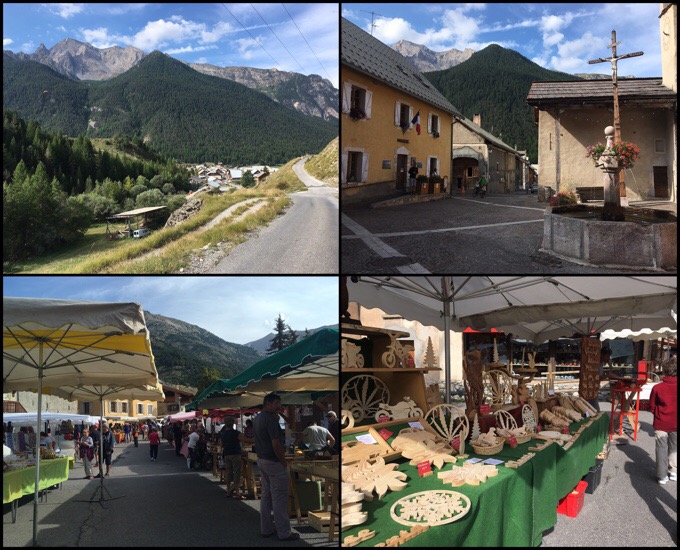 Don’t ask me how I did it, but I was somehow there for two hours. What I didn’t know is that this wouldn’t be the only oddity in how I spent my time today. I don’t like being inefficient, and I feel like that happened today, but I’m on a very flexible schedule and am enjoying that. I didn’t see much woodworking, but I did go to the small store for food and a bakery to get a sandwich for an early lunch. I also went to the tourism center and was able to use the wifi to get yesterday’s blog post up and do a few other things. There was a lot of waiting in line for each thing. Just getting cheese took me 15mins, but I’m learning to relax and appreciate the process in these small villages. I was just glad I made it in before everything closes down midday. Things tend to close from 12-3pm it seems. It’s really interesting to me because it’s the opposite in the US where places will be open as many hours as they can to make money. In Briançon the other day, I wanted to eat and saw restaurants closed from 3-6:30pm. I got to one by 2:15pm and they said they were done serving. Then the others had already closed. I ended up eating the only thing open, McDonalds.

Anyway, I was very happy to get food for the next 3 days. Yep, I’ll actually carry more than 24hrs of food! There are restaurants and places to stay along the way, but no grocery store for people that eat their own food like me. I think there are some off trail if you hitch or hike out of the way, but I don’t mind carrying. They really do make the GR5 so people don’t have to carry hardly anything if they don’t want to. Reminds me of the Camino in that way. I do like that there are options for doing it in whatever way people like.

The main reason I was paying attention to time was that I knew afternoon rain was forecasted. I was wasting some clear hiking weather, but just had to accept that timing wasn’t in my favor on this one. I’ve been really fortunate for most of this hike (other than the beginning) that weather has been awesome. If it has rained or stormed, it’s been at night. Well, it looked like I was not going to dodge it today. I walked out of the village at 12:20pm with ominous clouds overhead and questioned my decision. The weather said it wouldn’t rain until 3pm, and then it would be light for a couple hours. However, that can easily be wrong in isolated areas in mountains. I figured I’d get a couple hours further and just see how it went. If need be, the terrain looked good for pitching the tent pretty easily and waiting it out. There were even parasailing lessons on the way out. Yes, this is not common to see in a small village, and another example of the commercialism that felt a bit stronger here. 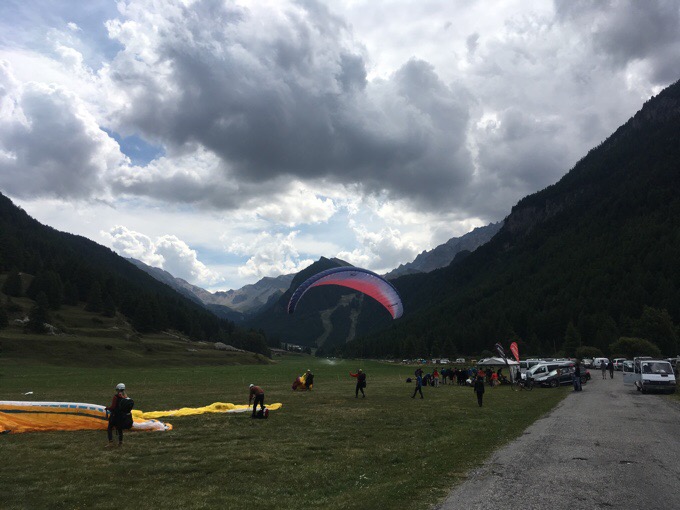 It was nice wooded uphill that was steep at times. Thunder rumbled, and skies got dark, but no rain fell and many families and people were still out enjoying some great trail. 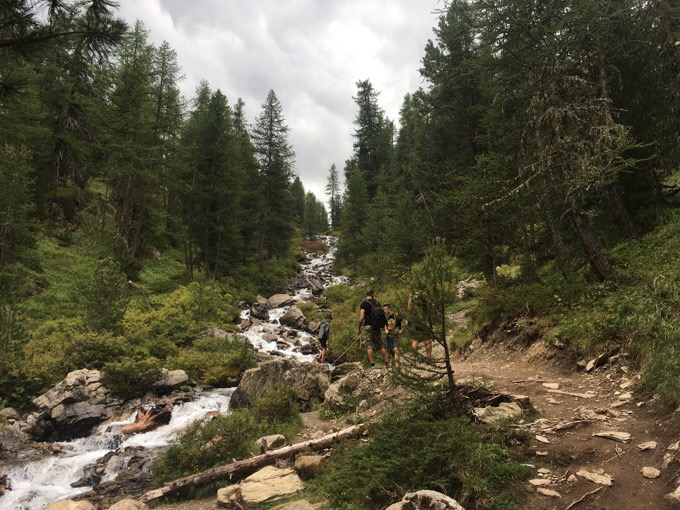 Many were going up to Lac Miroir, which reflected the mountains around it and was a great spot. I was glad that the weather wasn’t the low fog that can block the mountain views. 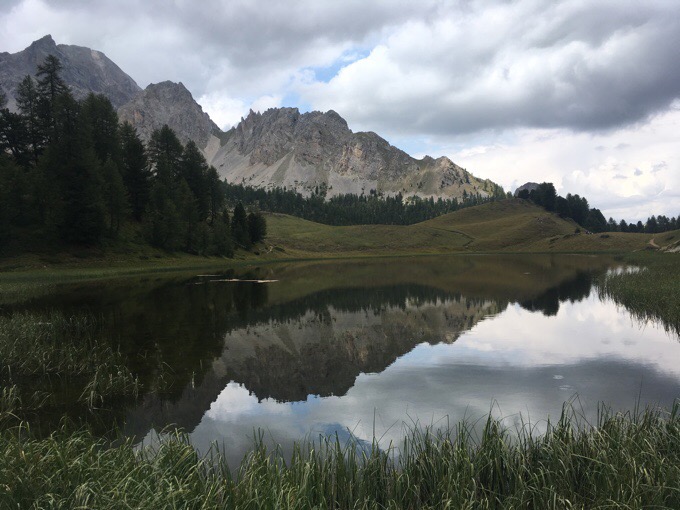 I continued up to the second lake, Lac Ste Anne. On the way up, the rain came for a moment and stopped, so no rain jacket was needed, and the umbrella was sufficient. When I got to the lake, it started to rain again and I had a decision to make. This was the point of no escape where I had another hour up to one of the highest cols on the route. Some thunder rumbled, and it didn’t seem like a good idea to continue on. 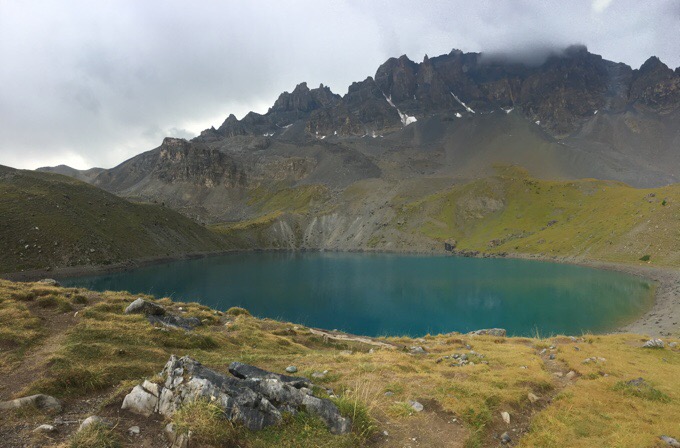 The small Ste Anne chapel was there, but was unfortunately locked. The overhanging roof was just enough to sit under in the light rain and be protected since there wasn’t any wind to blow the rain underneath. I decided to sit under it and write my blog post for the day while I waited to see what it would do. Hoping it would pass after a bit and I could carry on. The only problem was that it was chilly. My shirt was soaked in sweat, and as soon as I stopped, I was chilled. I ended up taking that shirt off and putting on my rain gear along with my down jacket, beanie, and buff. I huddled in the corner and was glad I waited. 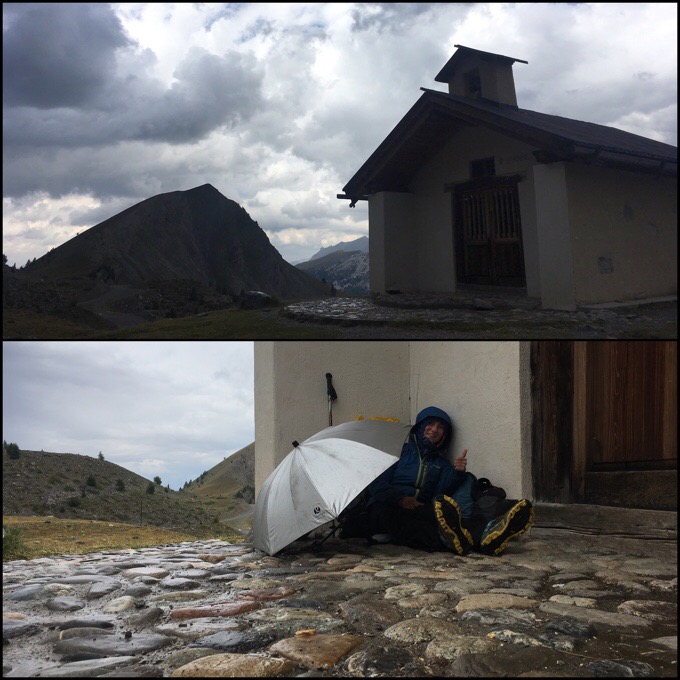 The rain lasted over and hour and did come down harder. The fog dropped down and covered the mountains over the lake. Each time there was thunder, it would be followed by a long echoing rockfall down the mountains across the lake. I couldn’t see what was falling, but could hear it and it was pretty cool. I tried to get video of the sound, but it wasn’t enough. The audio was only picking up the rain. After over an hour, it cleared enough and I headed up and over Col Girardin, one of the highest cols on the route at 8878ft/2706m. The view coming down the other side was really nice. 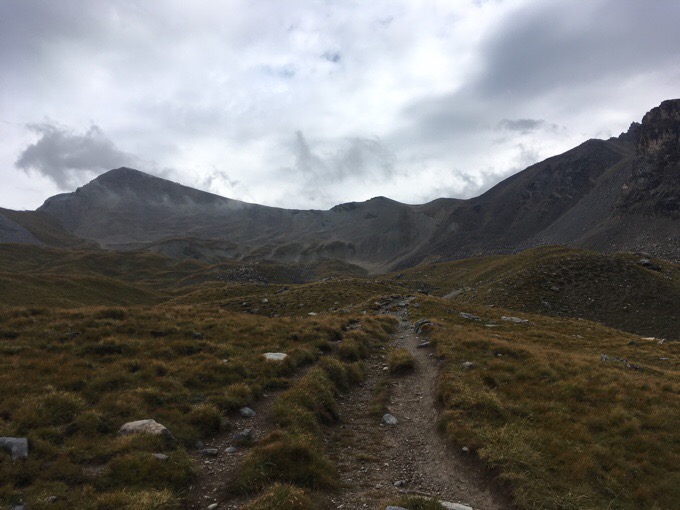 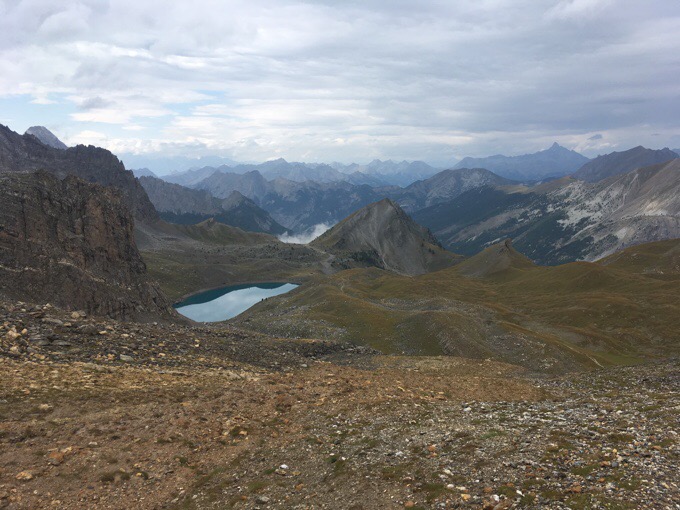 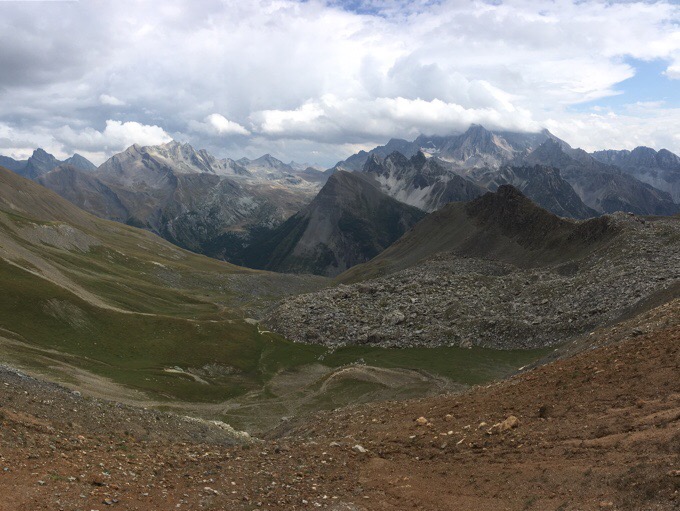 View on the other side. 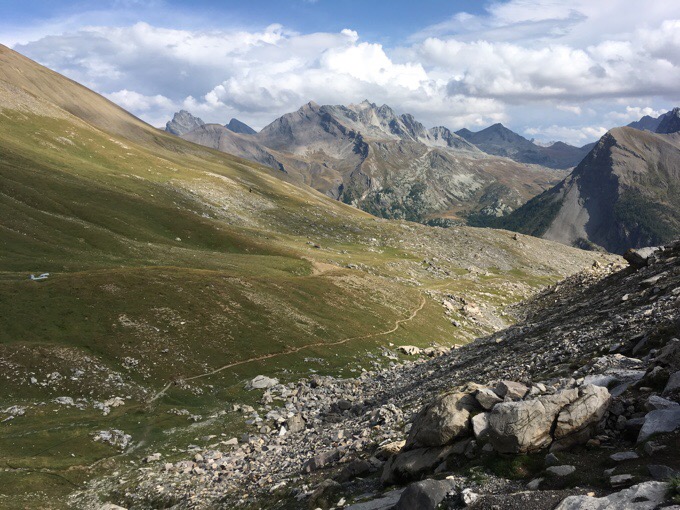 I got down to a junction, and had a choice to make. There was an option to take an alternate route that seemed more interesting than what is the longest road walk on the GR5. Two problems though. One was that I only had a track for that alternate because it isn’t one of the ones recommended in the guidebook. I had no way of knowing what the terrain was like or how long it might take. For anyone that knows this area, on the map it was called the GR de Pays Tour du Chambeyron. Second issue was the weather. I could see another bout of a shower was headed towards me down the valley. The rain wasn’t done yet. I ended up not doing the alternate and deciding that if it’s going to rain on me, at least I’ll be on an easy road walk. 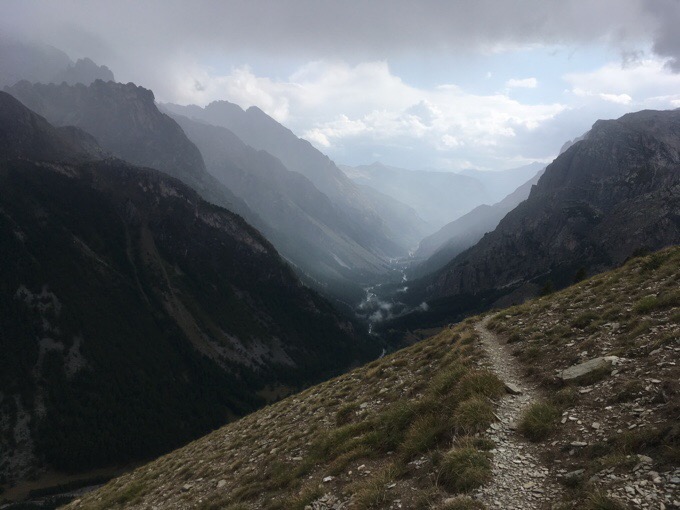 Of course, I was second guessing my decision on the way down as the rain passed through quickly. Then I turned a switchback to see a sign from the universe that I was where I was supposed to be…a rainbow! My first rainbow this whole summer! That totally solidified my decision to take the GR5 over the unknown alternate. 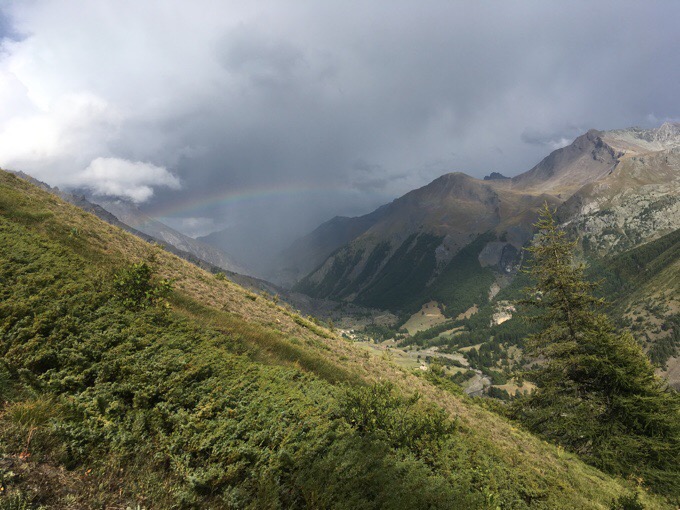 I dropped down to the hamlet (even smaller than a village, just a handful of buildings) of La Barge. There was a fountain there and I filled up for overnight figuring I’d do the road walk and throw up the tent when the mood struck me. 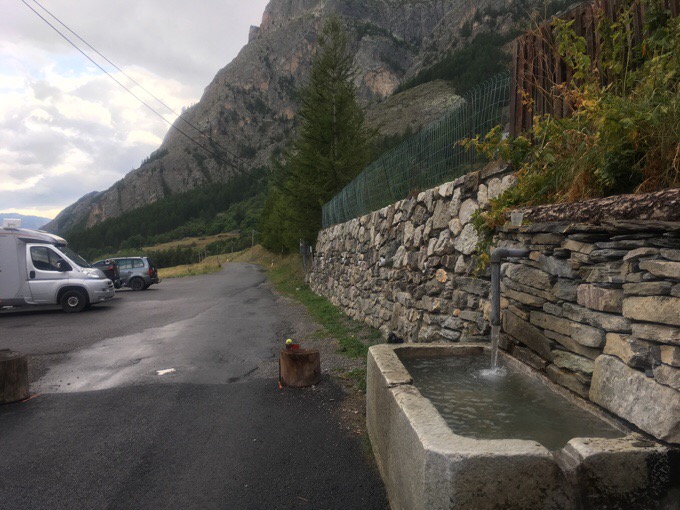 It was 5:30pm, and I wanted to hike later since I’d lost time earlier in town and waiting out the rain. It did end up raining some and the umbrella kept me nice and dry with no need for rain gear. It was good to relax and shake off the odd day that just felt a little off kilter.

It was supposed to stop raining after 5pm, but the skies were not clearing at all. At 6:30pm, I got to a good spot along the river to tent. It was raining lightly, but not to where it’d be annoying to get the tent up. I quickly got my stuff laid out for pitching the tent. Then I turned to grab the poles…shit! No poles! My mind immediately flashed to the fountain an hour up the road where I’d propped them up. Shit! You can even see them barely in the photo above. I sometimes have them in my pack on road walks and was holding the umberella, so I didn’t even think about the fact that I wasn’t holding them. Aaargh!

The road was a very quiet one, but a few cars did go by in the last hour. I quickly grabbed my stuff and ran up to the road and a car came by immediately! It was a french couple with a teenage daughter, but none of them knew much English. Google translate got the job done and they drove me back up to the hamlet. When we got there it was really raining hard. Thankfully the poles were right where I left them. The family drove on and I went in the small chapel randomly in this hamlet that had the door open. I figured it wouldn’t take long and I’d get a ride right back to the spot I wanted to camp. I seriously considered sleeping in the chapel, but a big sculpture of Jesus on a cross was literally looking down on me in a back corner. I had a couple hours of daylight to get myself somewhere. 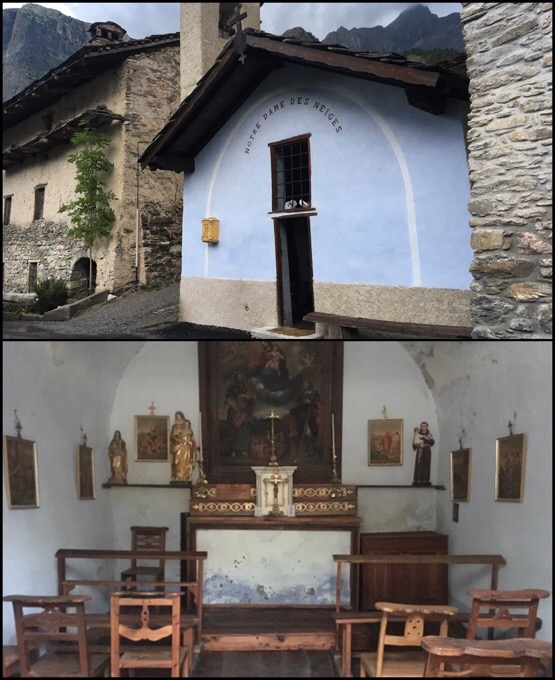 It was dumping rain and just before 7pm. Leaving the poles was a bit of a good thing because I was inside for the downpour. I did the blog while I waited, and a car didn’t come by going the right direction for 45min. It was the same family! They were just driving down the road in hopes of seeing an ibex. I tried to tell them they don’t seem to hang out in low valleys. I don’t know that they understood what I was doing, but they gave me a ride back to where they initially picked me up and I was all setup by 8:15pm. Man, what a weird day! 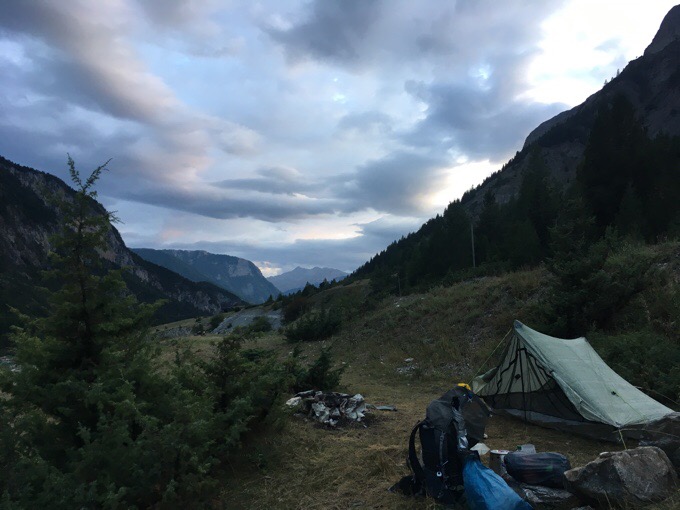 It is quite damp out, but the rain stopped at least before I pitched the tent. Still everything is just damp from the air and being in this river valley. It will be sunny tomorrow, so everything will dry out. The funny thing is that somehow I still am getting to sleep by 10pm. I did so much of my writing earlier in the day that I didn’t have to do much more by the time I setup. Everything was pretty mixed up today, but it all got done somehow, whew.