The tent was plenty wet along the river in the cold valley this morning. I got going at 7:45am and finished up the road walk that eventually led to a track to the tiny village of Fouillouse. Technically, there was a grassy rocky track next to the road that was the given option, but the road was much more enjoyable. 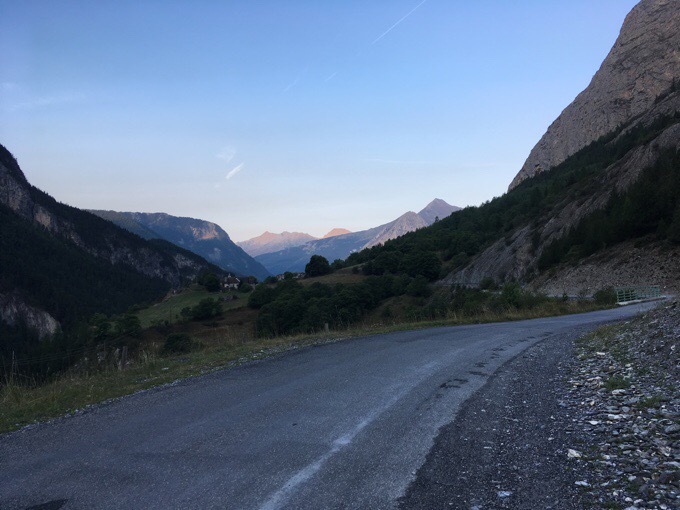 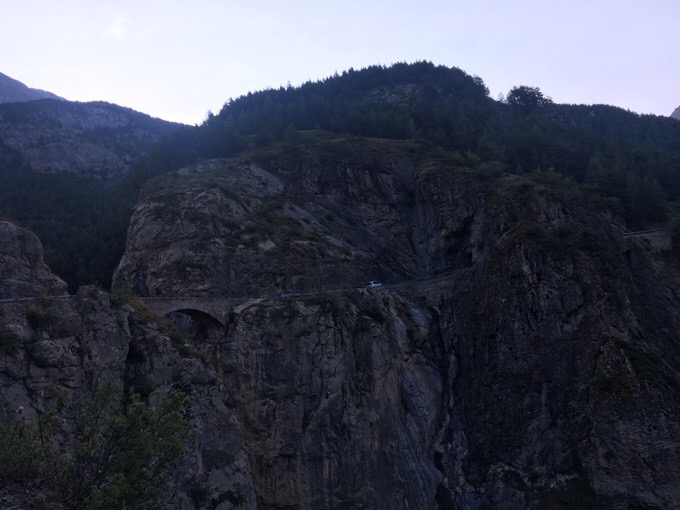 A very old bridge and tunnel I went over and through.

Fouillouse wins for the cutest water fountain I think. The guidebook noted some concrete ones from long ago, but I was focused on this one. The donkey has a cat curled up on it and rocked back and forth as the wheel turned when a bucket would fill with water. Then, around the corner from the home was an actual donkey, ha! The cat must have been somewhere. 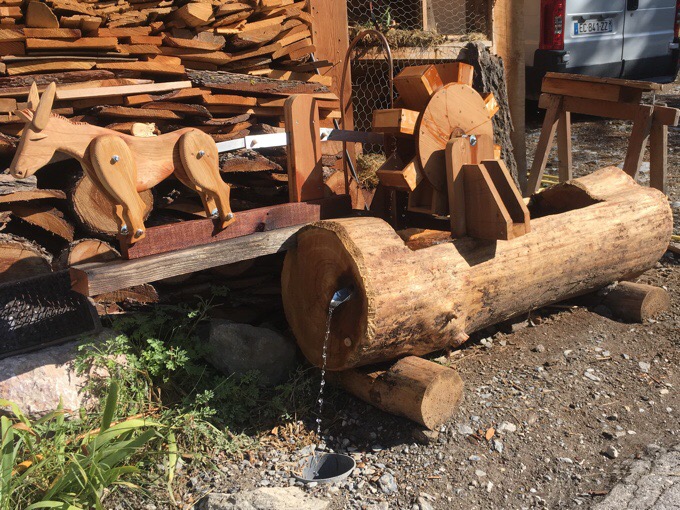 I felt like today was split into three long stretches up or down different valleys. The day seemed to drag with the same view for long periods of time, but was still nice. I don’t know if it’s the day or me dragging because I again seemed to eat up a lot of time on things other than walking. A couple hours into the day I got service and plopped down to post the blog. The reception was a bit weak, so it took a bit longer to load things. Then I also got on tangents with other things online. I’m feeling really relaxed on my timing, so I’m good with it, but when I look at my mileage at the end of the day, I kinda feel like I should’ve done more because I can…but I’m really trying to teach myself on this trip that just because I can do that sort of thing doesn’t mean I have to all the time. I’m liking the more relaxed pace right now, and still well ahead of the recommended schedule. I don’t know that I always need to do it, but it feels good now and I’m enjoying where I am. 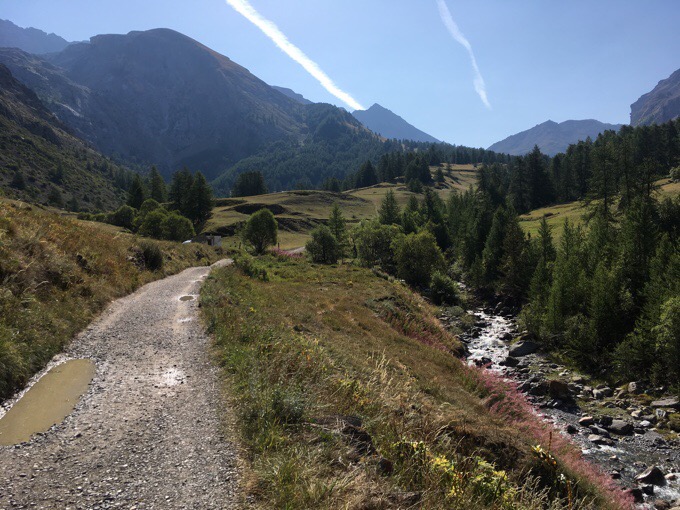 On the way up to Col du Vallonnet I stopped by a bridge and stream with a shaded tree to have lunch. It was the last shaded spot until the end of the day, so I made the right call on that one. It was a long lunch because I had to do what hikers call a “yard sale” with all my gear in the sun to dry it out after the rain and wet night last night. I haven’t had to do that much this summer and I definitely don’t miss it. It’s a lunch break of never really getting a break with the unpacking, rotating things in the sun, and repacking. At least I had a comfy spot with a nice view by a stream when I was sitting. 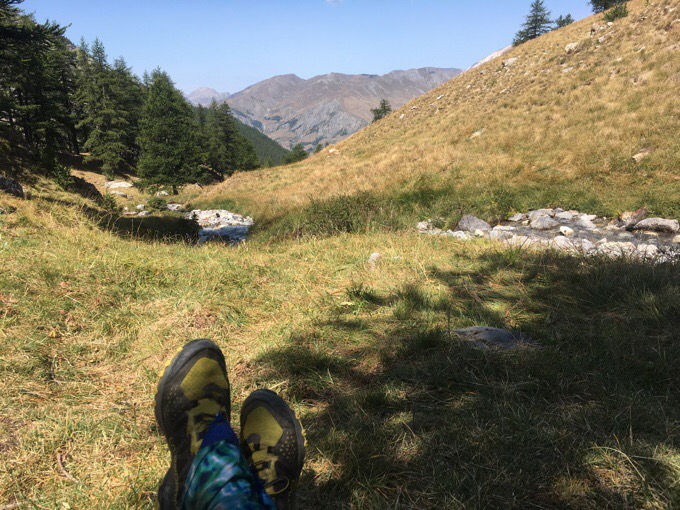 Then I finished the climb up Col du Vallonnet that felt like an eternity for some reason. The scenery is much less green, but I’ve noticed in the guidebook photos, that isn’t the case, so it must be because it’s the end of the summer.

The scenery changed over the col to be much more mountainous and rocky. I liked it and it made me feel quite small. 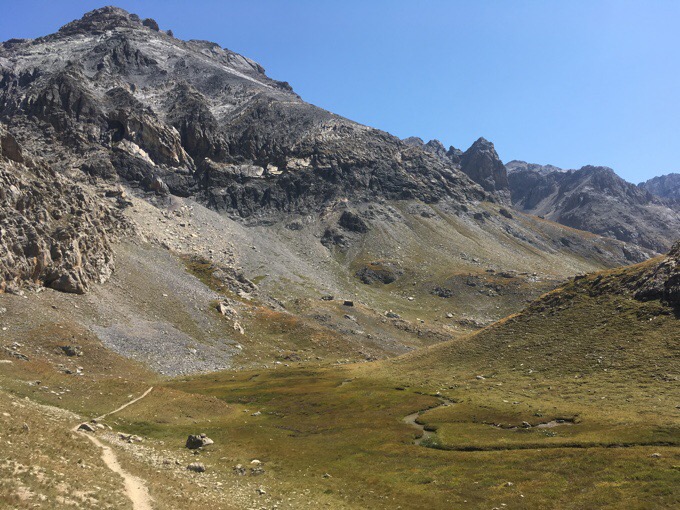 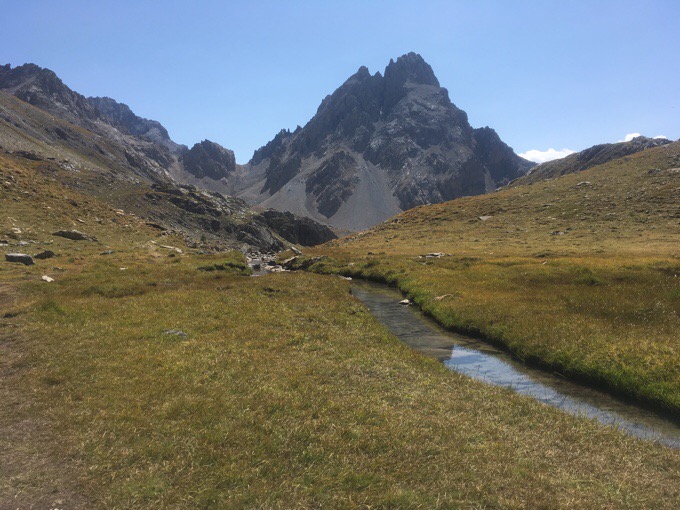 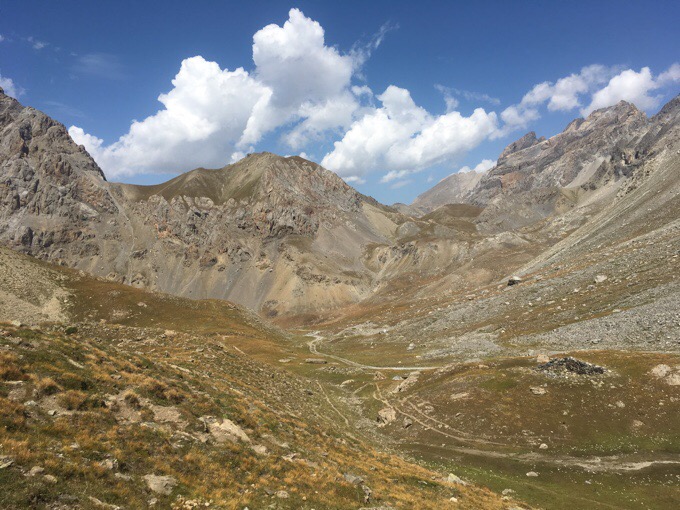 Then there was the climb up and over Col de Mallemort. At the top was my favorite old building this far. They don’t call it a fort in the guidebook, and call it the ruined Baraquements de Viraysse. It was really cool to look down on it and imagine it in use. It had more of a medievil times feel to it. 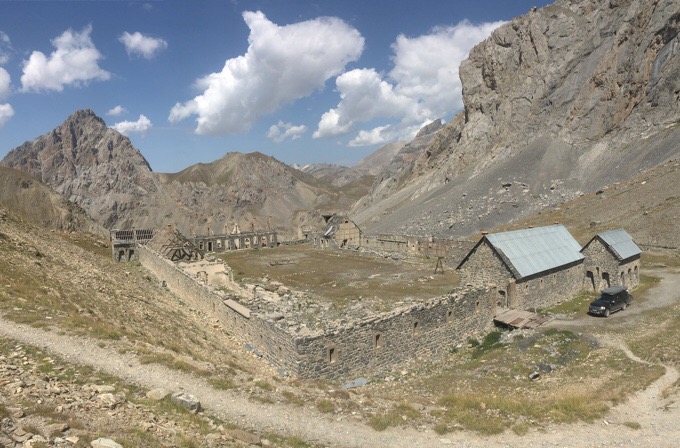 From there, it was a never ending winding drop down to a valley and the village of Larche, which seemed more modern in design, but had an interesting history of being destroyed by German and Italian troops in 1944 and has been rebuilt. 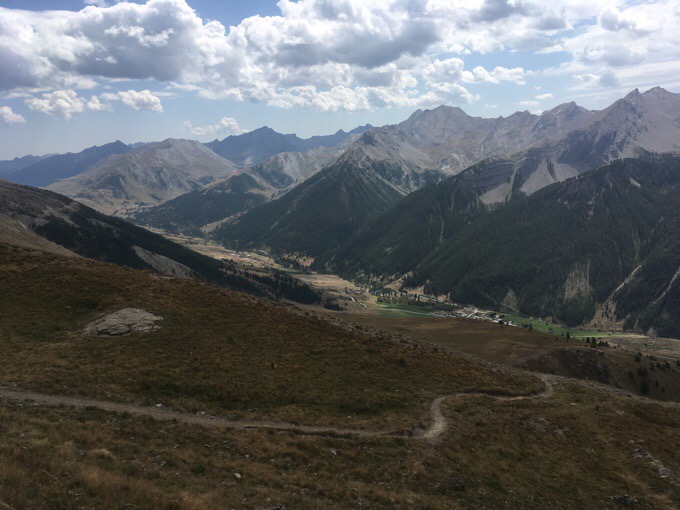 On the way down I did something stupid with my Gaia GPS app on my phone and somehow logged out and all my maps were gone. I still had my tracks and waypoints, but the base maps are not loaded anymore, so they are fuzzy when I zoom in. Still usable, but for instance, I don’t have any contour lines, so that’s annoying because the guidebook drawn basic maps also don’t have contour lines. I spent probably 30mins trying to fix it. There wasn’t any wifi in the village to load the new maps, so maybe I can do that in a couple days. I’ll be ok with what I have until then. Just one more time eater for the day.

I also spent time reading ahead because I’m entering Mercantour National Park. I didn’t realize I was entering it already and was trying to figure out logistically where I could camp in the park. I went in the visitors center and found out it is ok to camp as long as it’s between 7pm-9am. I headed out of the village towards the park, which is known for an abundance of marmots apparently, and I couldn’t resist getting a chocolate ice cream with how hot the sun was. Yep, one more pit stop! I just love how often on this trip I’ve been able to walk towards mountains or in woods with an ice cream. Does life get any better!? 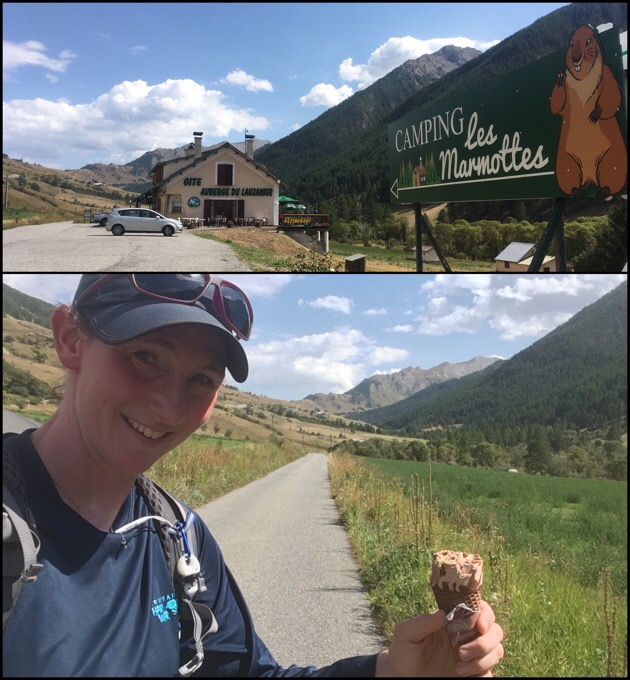 I used my umbrella for shade. Thankfully, I had about an hour of tree shaded walking on a one lane road into the park. 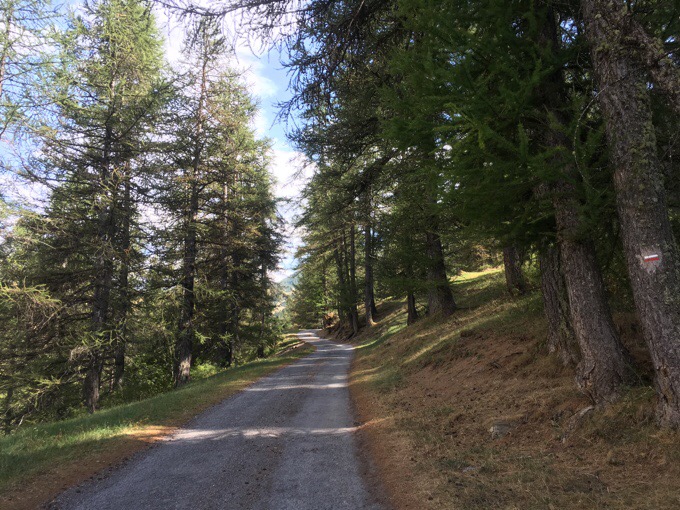 The guidebook notes how at the entrance to the park, there’s a sign warning people not to feed the marmots and you’ll see people right next to it feeding them. They were right! I’ve been seeing and hearing marmots all summer, but can’t get a good close up photo without them darting into a hole. Well, these guys were so habituated that they were practically being pet! I got great shots of one just hanging out with a group of people who claim that it took fruit from one of their bags. Yeah, just admit that you fed it buddy. He was waiting for more. The marmots here do win the award for chubbiest marmots of the summer. 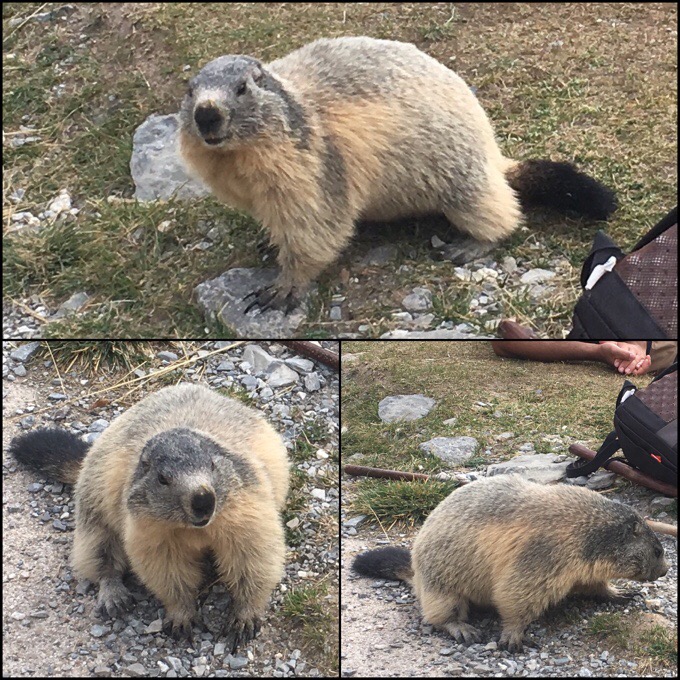 I walked into the park at 5pm and was going to try to go another hour, but then I realized the terrain was not going to be good for camping. I got as far as I could and stopped at 5:20pm before the trail went up to traverse a hillside. 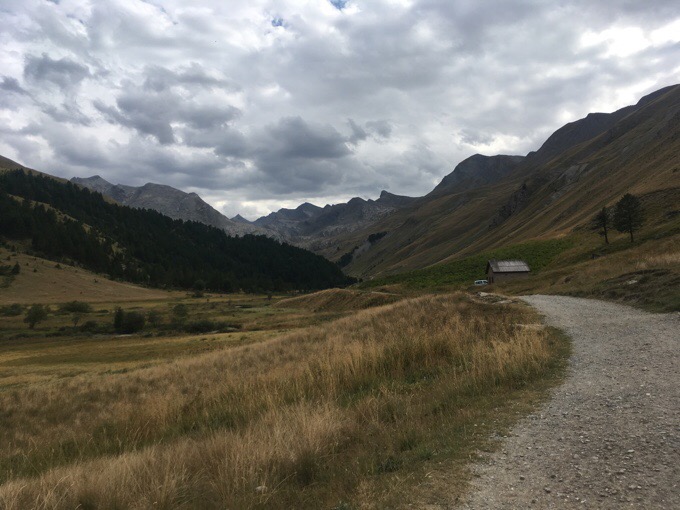 I walked well off the trail and behind some rows of pine trees. Marmots were scurrying everywhere. I picked a spot not far from a stream and did my camp chores, dinner, and blog stuff while I waited for 7pm to arrive to pitch the tent. This is a popular spot because the group of trees nearby are basically a pit toilet with used toilet paper all over.

The weather was perfect, and it worked out well. A shepherd came through with a group of sheep. I was worried I’d need to move, but they thankfully turned up the hillside. Then, out of nowhere, a huge white dog came up behind me and scared the crap out of me. He didn’t bark, but just came up behind me and stood really close and checked me out. It must have been with the sheep cause it walked that way, but it was huge and not like the others the shepherd had. I hope they don’t come early in the morning. I don’t see a ton of sheep droppings, but enough that they maybe do come down here. 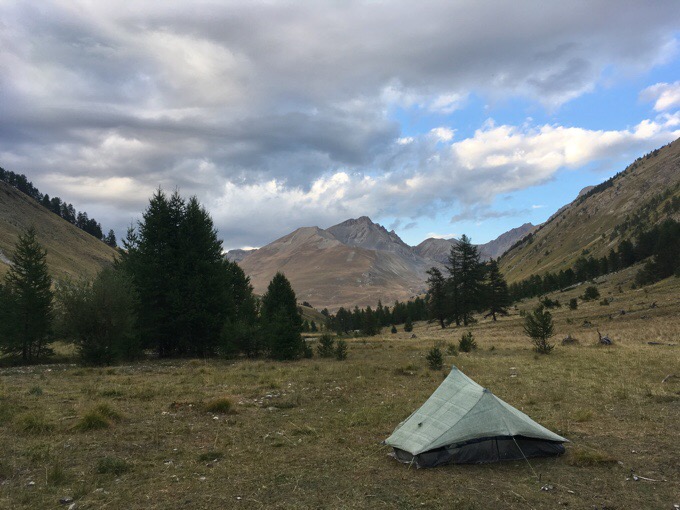 It’s a great evening, and I’m loving the view. The nearby stream is just the right white noise to put me to sleep. It’s getting dark and I just heard sticks breaking and something significant coming up behind the tent. I looked back there to see a dude in full on camo (even his face) stomping my way. I thought he had a gun, but it was a long tripod with a huge camera on the end. Jeez, does he realize how that comes off stomping up behind someone’s tent as it’s getting dark!?