Somewhat unexpectedly, it rained overnight. I had checked the forecast in the afternoon, and it had no precipitation for two days. However, in this area, rain can happen at anytime. It rained a bit at 11pm and then from about 3-5am fairly steady. It was heavy enough that I had trouble sleeping through it and kept waking up. The air was still dry, so the only thing that was wet was the tent, and that’s all I had to dry out at lunch today. I got going at 7:40am, and had the popular trail in Mercantour National Park up to Lac du Lauzanier all to myself. The morning reflection of the mountains in the lake were great, but tough to capture.

It was Saturday morning, and I expected to see more tents near the lake, but there were only three. As I hiked up further, another hiker was just getting on trail after packing up, and he had an ultralight setup it seemed. We struck up a conversation, and walked together for an hour or so. His name was Tony, and he was from France doing the GR5 as a general framework. He just used the map (no guidebook), but took whatever trail seemed interesting in that general direction. He was great to walk with. He had made his own sleeping bag and tent, and is trying to start selling his own lightweight gear in France. There are almost no cottage companies in Europe that sell ultralight gear like in the US. I’m excited for Tony and hope it takes off. He has the website www.aliva.fr, and hopes to have it live for the public to view in a month. I know many of you that read this may be interested in what he’s trying to do as it’s quite expensive to order gear from the US to Europe. Tony and I hiked up over Pas de la Cavale together and then he forked off to check out some lakes along another route someone had recommended. 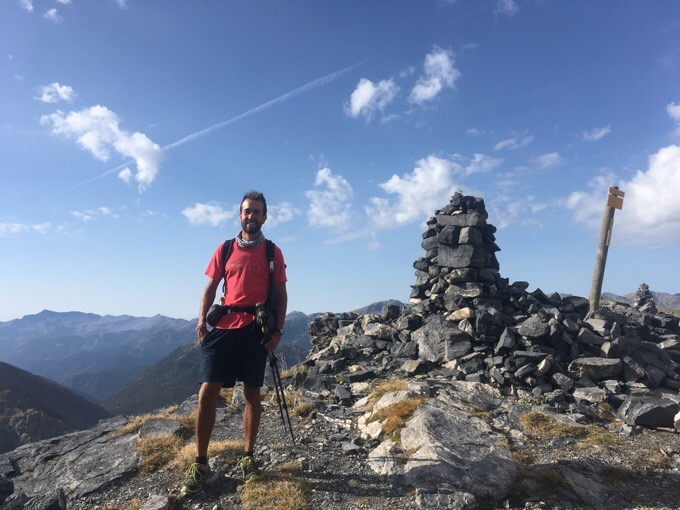 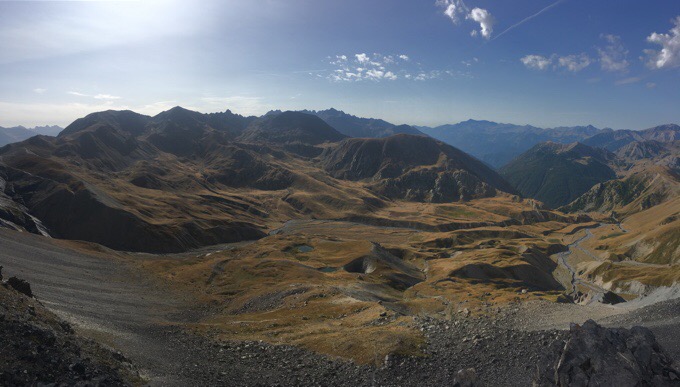 The no longer green scenery, but still great. 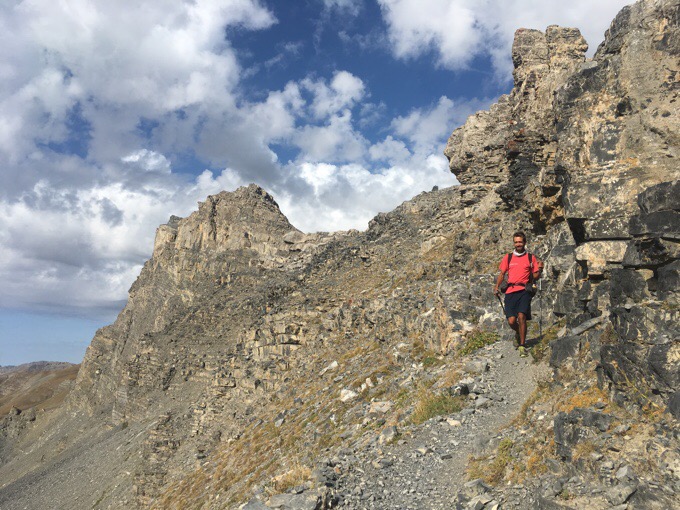 I hiked down the valley and then up over one more col (Col des Forches) before dropping down to the small hamlet of Bousieyas. On the way up the col, skies got much darker behind me and drops would fall from time to time, but somehow it stayed just behind me. There were bunkers at the col and then the other side had ruined barracks from the 1890s at the Camp des Fourches. 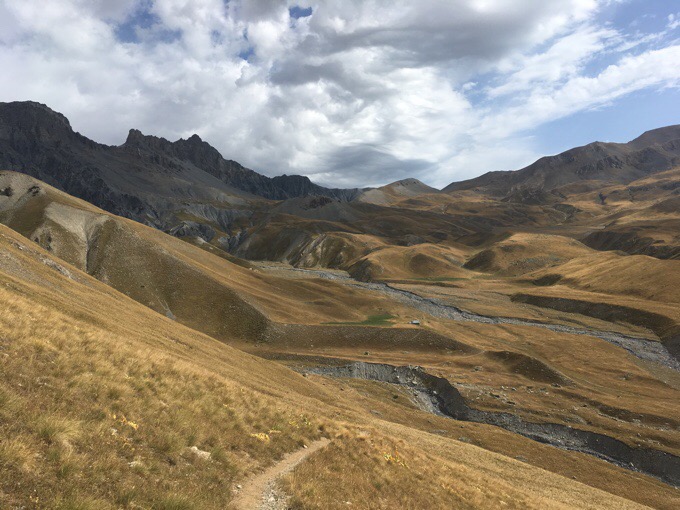 Looking back to Pas de la Cavale on the left. 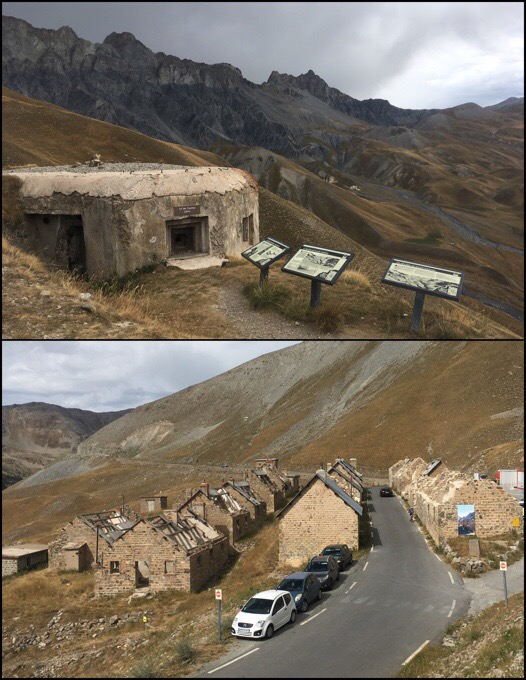 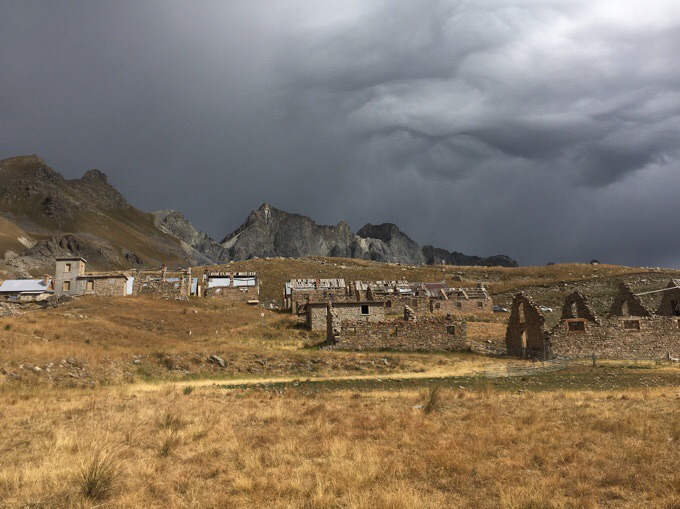 On the way down to Bousieyas the trail was cutting what seemed to be a very popular winding road. Maybe it was to see the ruined barracks and scenery as well. There were tour buses, motorcycles, cars, and cyclists all flying down the curves of the narrow winding road. I was glad the route was separate from the road, but it did cut it a few times and I almost felt like I was playing Frogger with the various traffic coming either direction with little notice on the blind turns.

I got to Bousieyas (the highest hamlet in the Alpes-Maritimes at 6178ft/1883m) right at lunch and couldn’t resist getting ice cream and a sandwich. I’m pretty good at resisting the big meals if I’ve just eaten, but landing there right at lunch and not ordering was near impossible on my hiker hunger. They had wifi, and I had no other service, so I was there for an hour and a half eating, drying out my tent, and getting the blog posted and a few other things done. I’ve gotten so spoiled with service in my tent at night that these last few days of having to post midday feels like such a time suck, but I’ve let it go and am just happy I’m getting service at all to post daily. That’s really awesome. 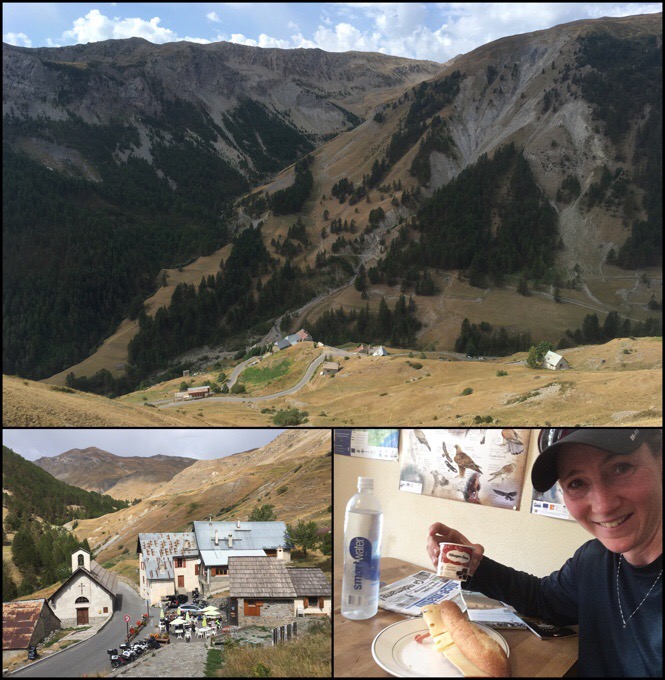 After lunch, it was up and over Col de la Colombière to a village, St Dalmas le Selvage (the highest village in the Alps-Maritimes at 4920ft/1500m). On the way down to St Dalmas le Selvage, a drizzle fell. It was actually a nice thing because this long winding switchback descent can be quite hot. I was thankful I didn’t get that. I walked through the village as the clouds cleared, and resisted an ice cream as it was getting hot and humid. 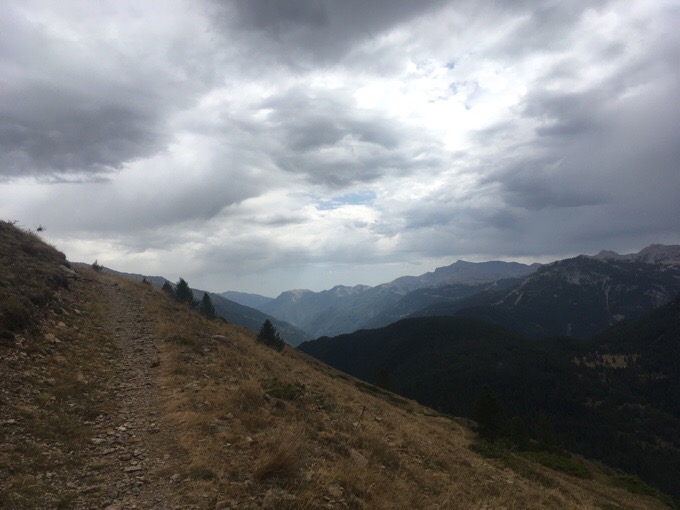 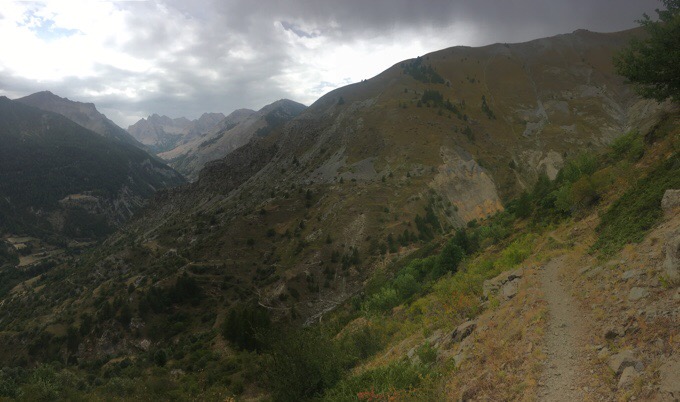 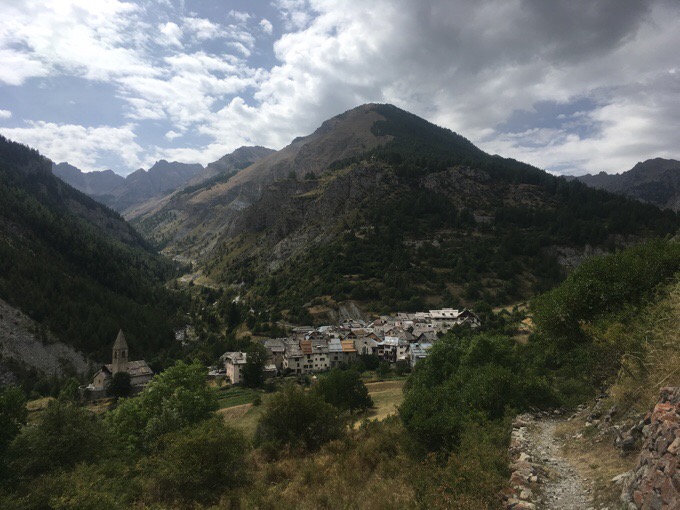 I hiked up and then down more rocky switchbacks to yet another village at the end of the day. I hadn’t looked ahead in detail and had no idea there were so many villages concentrated in this section. This time it was St Étienne de Tinée. I went through at 5pm, and absolutely had to get something cold to drink. The sun had come out and it was quite humid down in the valley. I couldn’t resist just getting dinner as well since it was almost time for that as well. My hunger took over any self-control I had. I got a wonderful iced tea and two big slices of pizza that I ate as I walked out of the village. Again, this walking and eating thing is pretty great! Efficient and great for multitasking trail. 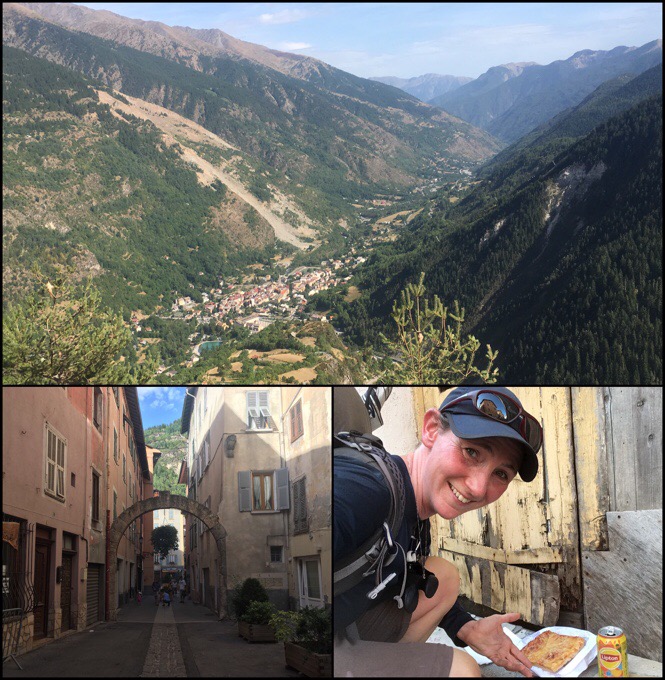 St Étienne de Tinée. I swear I’ve never taken so many selfies with food, but that’s the GR5.

It was about 5:30pm and I found myself stuck between two villages. Yep, I was headed right into another one! My plan was to be about an hour from Auron tomorrow morning to hike in, eat (again!), and resupply. I just didn’t realize I was going to be sandwiched between the two villages and that it was basically a highway between them and many homes. I walked until 6pm and found a spot up off the walking track just big enough to get my tent setup in the the woods right next to a hillside. I squeezed in perfectly. 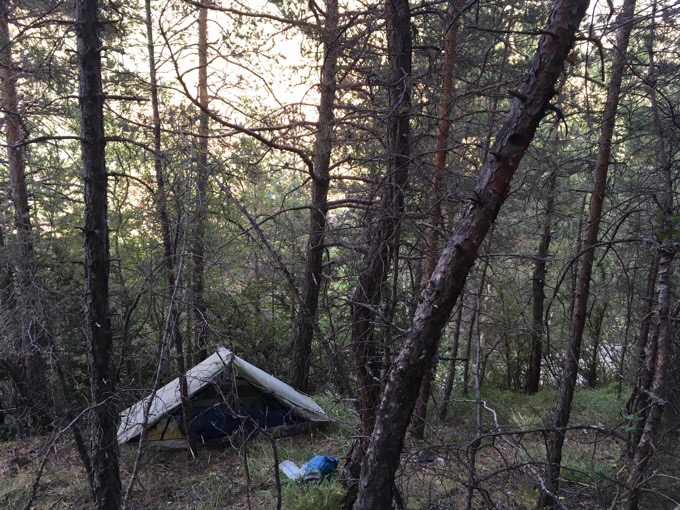 There’s a major road out of sight well below me, but traffic is pretty consistent. It will be my white noise for the night I guess. Well, it was a day of villages and I get to start off with another one tomorrow morning. In quite a congested area it seems, but it’s not bothering me. It’s still quite scenic and my stomach is happy for the food. I’ve decided to treat myself this final week to the Mediterranean, so I’m ready to eat some more tomorrow morning!