Welp, a zero it was. I slept in till 9am and could hear the cold rain coming down. I was oh so cozy with my sleeping pad (Therm-a-Rest NeoAir Women’s Xlite) that reflects my heat back on me and an additional down comforter over my sleeping bag for added warmth. The included breakfast was not an American breakfast at all. I was given three pieces of bread, butter, and some fruit spread. I coaxed them into three more pieces and I used all the spread and butter provided. I got hot chocolate with it, so that was great. The third one I’d had since I’d arrived.

I have food in my food bag, but it’s quite tempting on a hiker’s stomach to eat anything and everything that isn’t already in my food bag. With how remote it is here, a sandwich is €18/$20, so I had the self control to eat my trail food for lunch. Dinner and breakfast was included in the stay, so that was nice. I can easily lounge all day on a rainy day. I had a roommate that once told me I’m like a cat. I’m either doing nothing at all or I’m totally all over the place. I can easily lounge around all day, sleep, watch Netflix and YouTube, and surf social media and be quite content. That was me today. 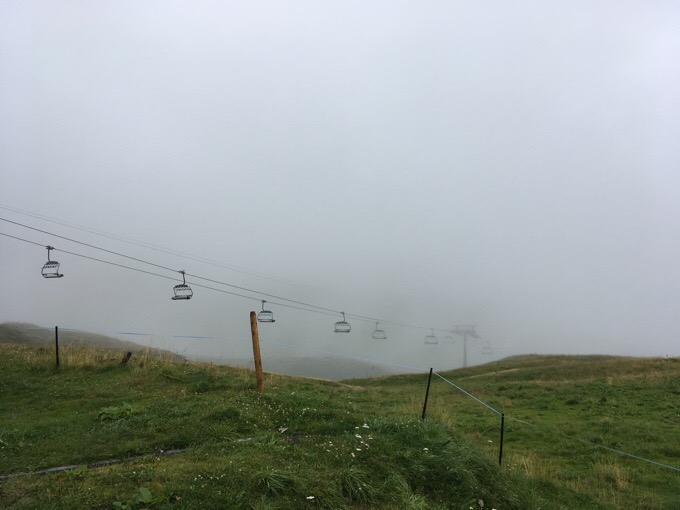 The view most of the day today.

After breakfast, the dense fog broke momentarily to reveal that it did snow just a bit higher last night. Had I stopped earlier yesterday at the last refuge I passed, I would have woken to a light layer of snow. I’m glad I came here where I have it all to myself and good wifi. I kinda kick myself for not going about an hour further to another spot, but it sounds smaller and like it may not have had wifi. 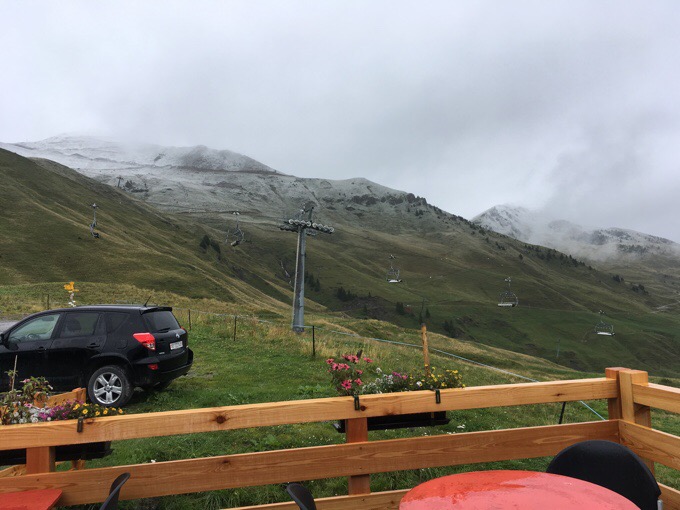 I was up there yesterday. 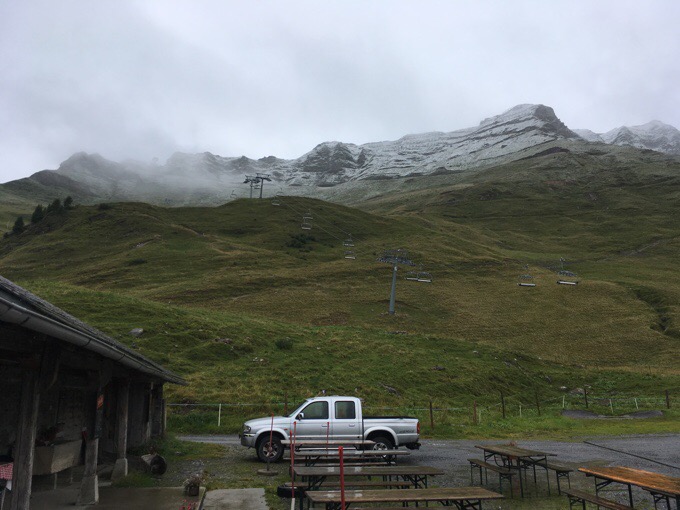 I did peek out from time to time to see if the weather magically cleared enough to make a run for it. The rain never stopped, but sometimes it would be a mist and a view would open up making me feel like I could make a run for it. Then minutes later, it would be a steady rain with no view at all. It just wasn’t worth it. Later in the day, I got a view of the Dents du Midi range on the other side of the valley and it had lots more snow. There are two ranges there that they say are quite beautiful I hope to see in the morning. Thirty minutes later, it was complete white out from fog and rain again. 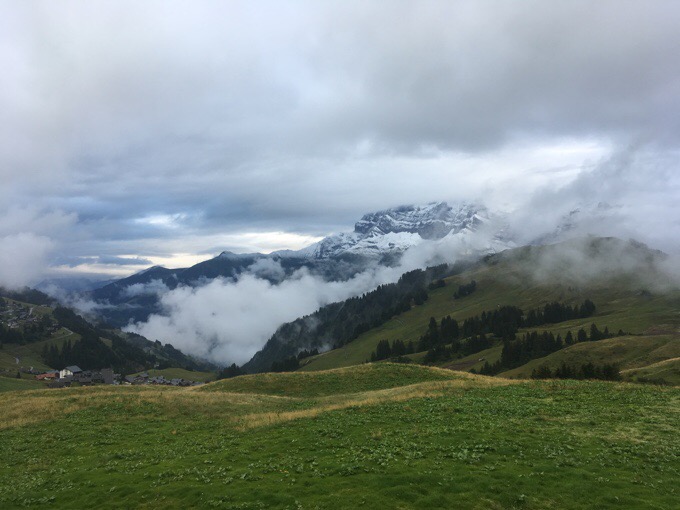 It’s forecasted to clear after tonight. I decided I can still make my arranged meetup time with my friends in Chamonix if I took today off and then hiked a full day tomorrow starting at 6am and got an early start the following day. At least then, I’ll be able to see the greatness all around me. I’d much rather do that than be in this weather. Even standing under the porch for moments to check the weather sent a chill through me like winter. It was in the upper 30sF/3C and raining. Not good for even running to a car to do an errand. A great day for being in a sleeping bag under a bonus down comforter! I finished the Netflix Ozark series (good one), watched some of the final season of Breaking Bad, watched the movie The Maze Runner (meh), and am going to try out the Netflix series The Crown tonight.

On a side note, one thing I keep forgetting to mention is that on the first day of this hike, it was foggy, so I took off my cap and sunglasses as I hiked uphill…and I managed to somehow lose my sunglasses, ugh! I lost or broke like four pairs along the Te Araroa this year and was pretty proud I did the whole HRP with the same pair. I will get some hopefully cheap ones in Chamonix since I break or lose them so often.

Just one other couple doing a different loop out here arrived and stayed for the day because of the weather, so I’m sharing the sleeping quarters tonight. I’m going to try to get to sleep early since I plan to hike out at 6am for a big day (WITH VIEWS!) tomorrow.