I did not feel very rested this morning. The high winds continued into the night. There would be periods of calm, but then the gusts would return. It seemed to calm around 3am and was a light breeze as I headed out this morning at 7:30am. 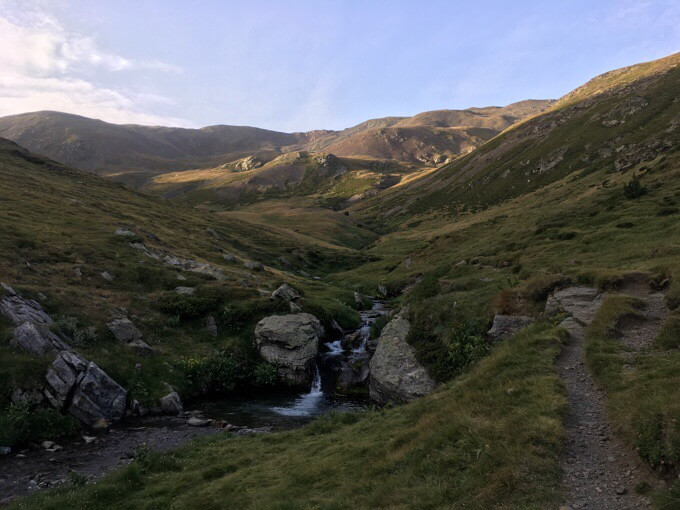 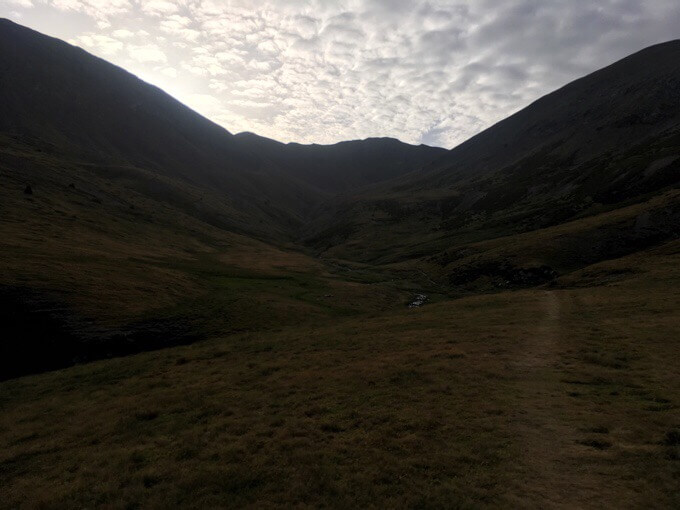 I’m really glad that I stopped where I did. There were absolutely no sheltered spots to tent pretty much the rest of the day today. The whole day was in fully exposed areas with just one drop into a valley that was somewhat out of the wind, but still no real protection. I know this because I was hyper aware of it as the winds were quite strong all morning and still gusting through the afternoon. Not great timing because the majority of the day was up on the ridge that is the border of Spain and France. It was pretty cool, but very draining with wind so strong in the morning that standing still even took a good deal of effort to keep from being blown over. Walking into it was even more tiring. 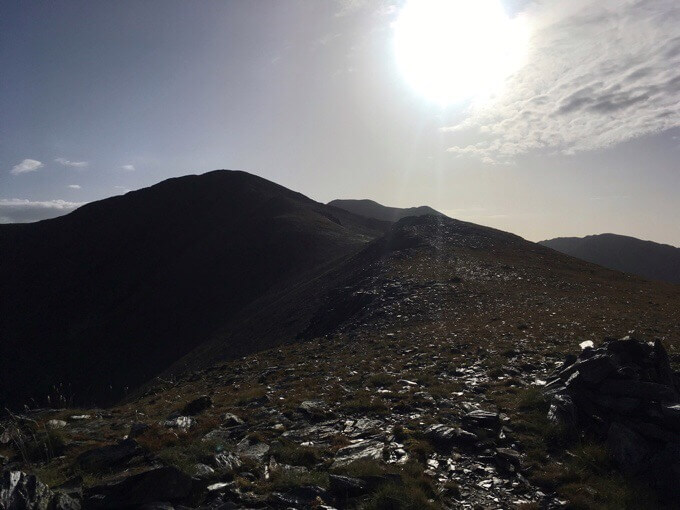 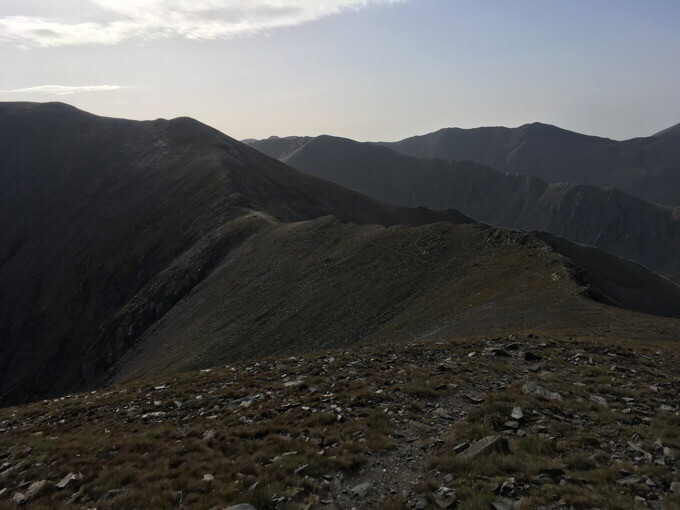 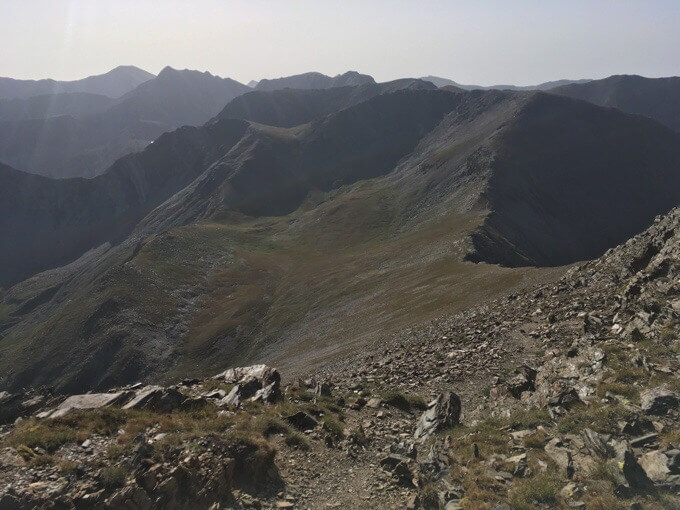 I did see many herds of izards. It was tough to get a good photo up close as they were good at clearing out by the time I approached. 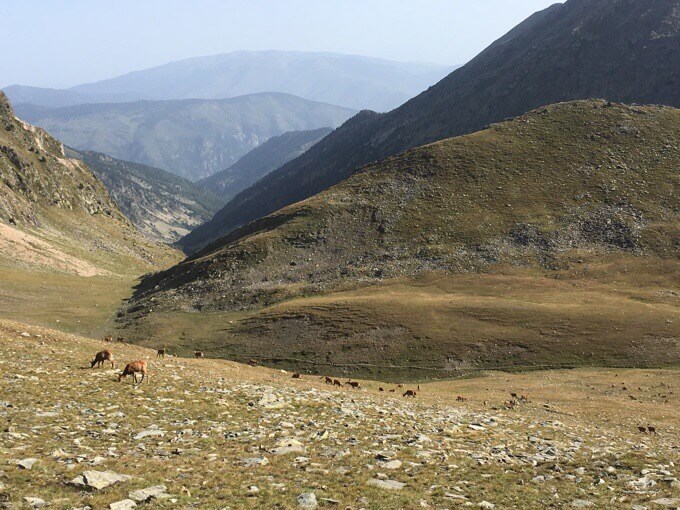 The photos are awesome, but at the time I took them, I was quite tired and not able to take it in with a jet engine blowing at me. The physical force and sound of the wind really triggers me and makes me anxious. There’s been a lot of it lately. It’s hard to explain, but I’d say that it makes me feel claustrophobic to have something constantly pushing on me and yelling in my ears. The best I’ve found to handle it is to try to go into my own world by putting my buff over my ears and playing music. It helps to take me away and think of something else. 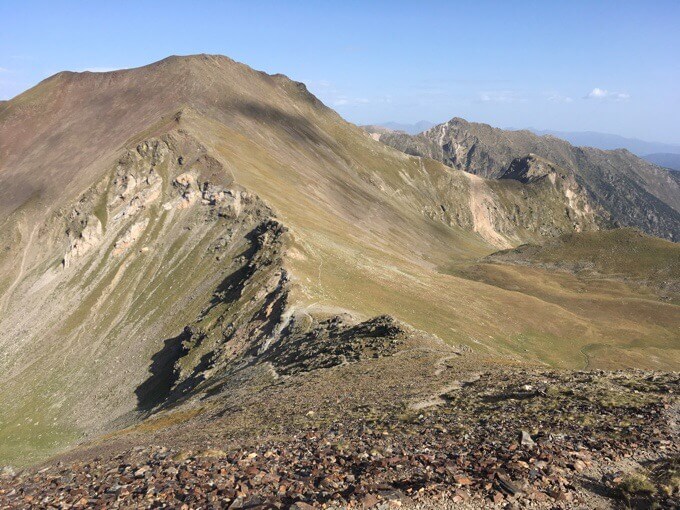 By mid morning, I was overlapping with the GR11 until lunch. Despite the wind, it’s a popular accessible section, so there were plenty of people out hiking, trail running, and even mountain biking. I met one French guy (I’m blanking on his name, Lionel?) who was taking 21 days to mountain bike the whole Pyrenees from sea to sea, similar to the HRP. He had a great enthused energy and hopes to write a book about his trip. He and I leapfrogged a few times as I’d catch up as he was pushing the bike up the steep ascents. Notice he has a backpack too. 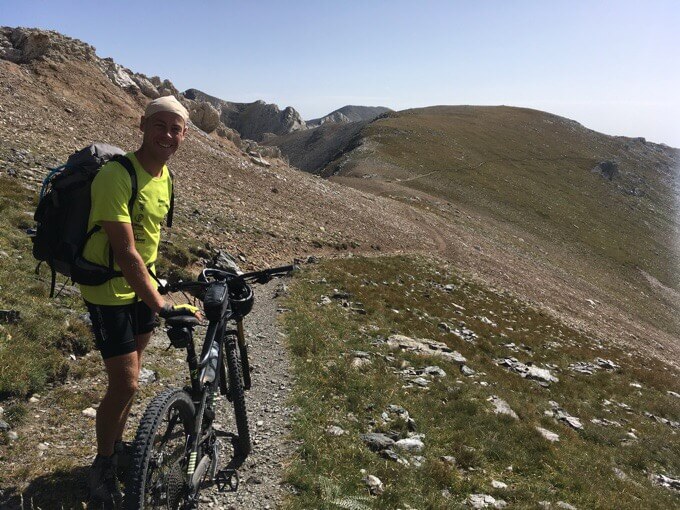 I don’t know how he was staying upright with the wind today. He must be really good at it because he didn’t have a scratch on him. He wears one of those full motorbike helmets when he does ride. We may be in the finish town at the same time and may meet up again once we are both done. I enviously watched him cruise down the one nice valley I had today. 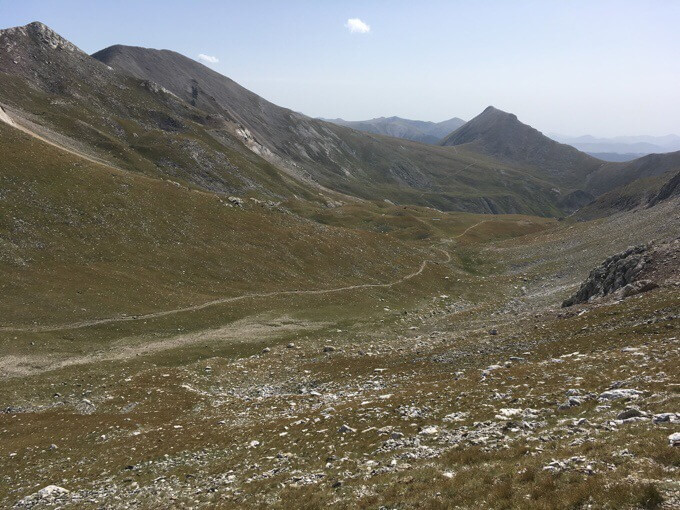 I ate lunch next to a nice refuge thinking I’d sit inside if it was too windy. Turns out there are so many people walking through, that they have access limited to the private guests only. It makes sense because a ton of families were around. I sat in the shade by a tree and a large family came and sat right on top of me when there were tons of other shaded tree spots. They were oblivious and the kids kept stepping on my stuff. I almost lost it when one of them stepped on my poles twice. I had to pack up and move to one of the other handful of trees and they didn’t even notice. Not the quiet lunch I normally enjoy. 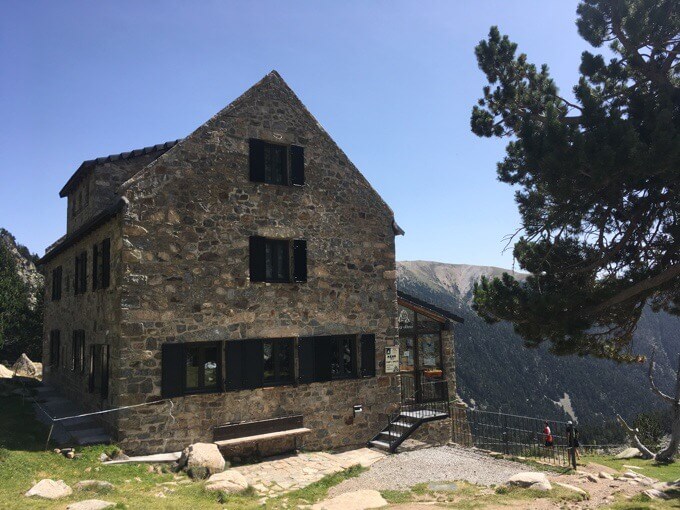 The guidebook normally does a good job of warning of things like water gaps and totally didn’t today. I thankfully noticed that there’s a 7hr gap in water and that I wasn’t going to see water again before I camped. I walked up a hill to the last source of the day and loaded up with 3L to get me through the rest of the afternoon and overnight. I wonder if many people end up missing that because normally, there’s plenty of water and we don’t really need to be hyper aware about it. I had heard the end of the route is much drier, so I was thankfully paying attention.

I guess the dryness would explain why the only people I saw the second half of the day was one trio of mountain bikers. They even stopped to make sure I wasn’t accidentally headed the wrong way because they knew there was no water and that I couldn’t walk to water today. I reassured them I was carrying 6lbs of water for just that reason. As a side note, my shoulders are sore tonight. The good thing was that most of the afternoon was great trail to cruise on. I felt like I was on the PCT or CDT! 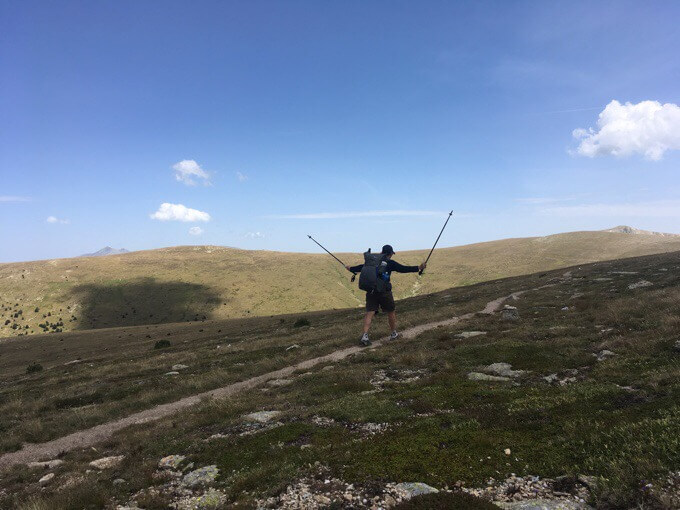 I was thankfully on the side of the ridge that most of the wind was shielded from. Every so often, it would kick up, but it stayed moderate most of the afternoon. 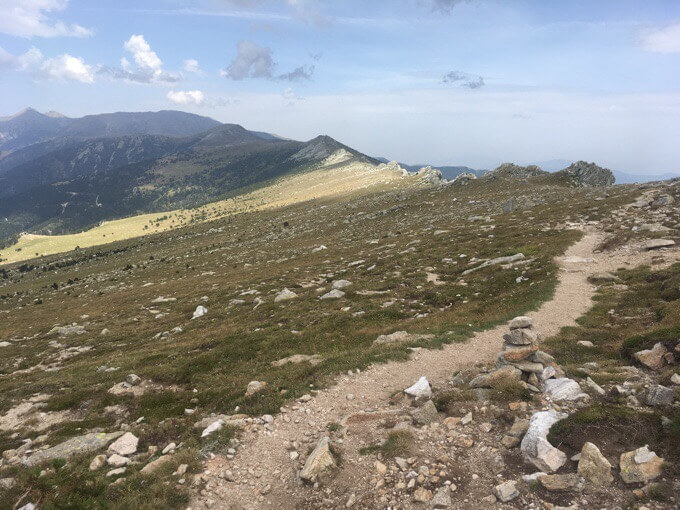 I noticed I was making good enough time to make it to an unstaffed refuge that holds 12 people, so I set my goal for that. As I walked, I also noticed intimidating clouds building behind me. It just kept getting bigger and darker back there and inching closer to me. The chance of rain today was low, but this is the Pyrenees, so anything could happen. Here are shots looking ahead and behind me. The dark clouds were chasing me. 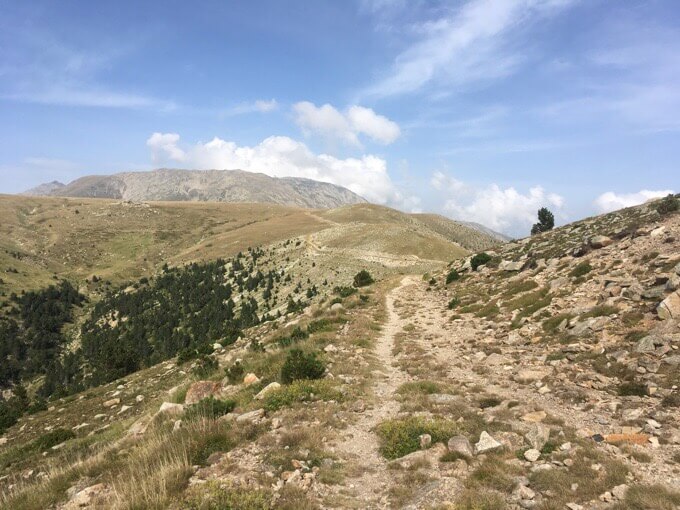 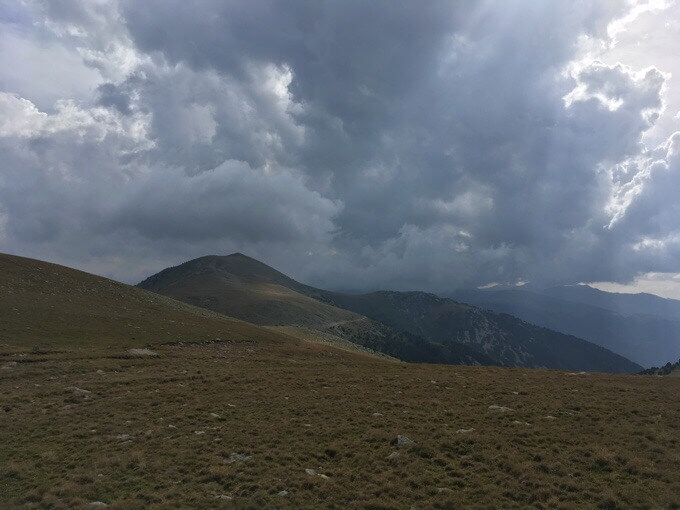 I made it to the Refuge de Pla Guillem at 5:45pm. It looked great from the outside, and I was hopeful. Then I stepped in to see it was not good at all. Totally ramshackled with busted windows, soot all over the walls, smells like a campfire, and feels more like a shack. I was 1.5hrs from an actual staffed refuge I could see, but I was done for the day and didn’t want to be around people and have another rough night of sleep. As the dark clouds and winds increased, I strategized where to pitch my tent. Then I saw all the rocks piled up and realized I could pitch it inside out of the wind! Perfect! 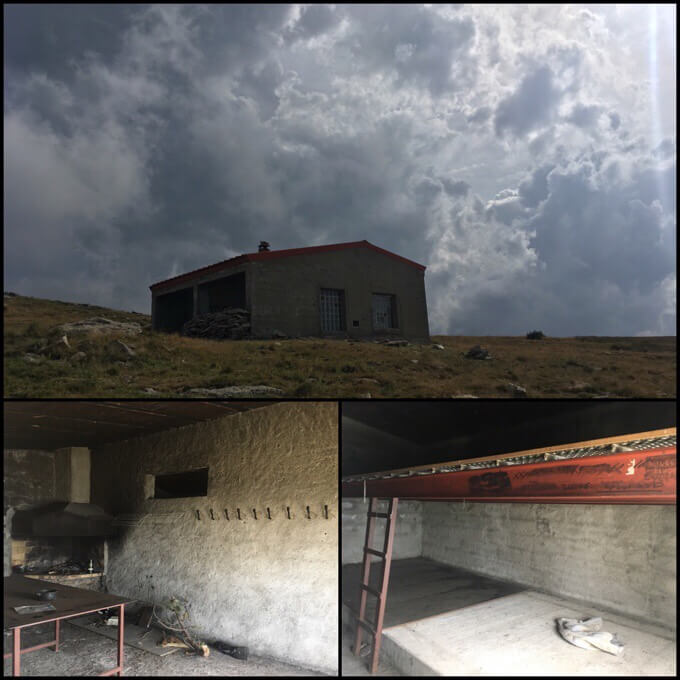 Many wonder how to pitch a non freestanding tent with rocks. Here are some photos to see how. Just pull the string through the loop already at the end of the guy lines to make a large noose. Then pick a narrow heavy rock to wrap it around. Then you can use other rocks as further support, which I don’t especially need in here. 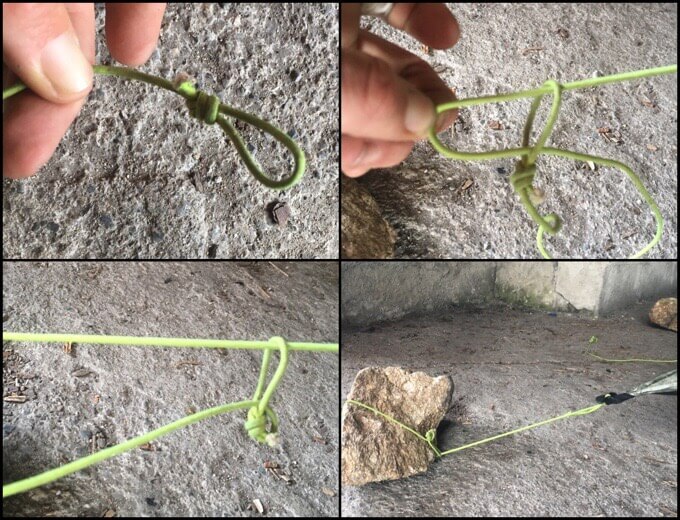 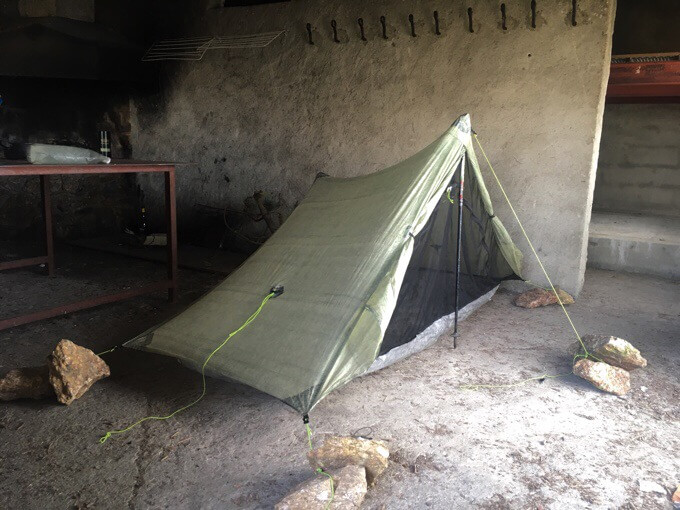 The clouds have cleared, but winds are quite strong again, so I’m so glad to be in here. I don’t see evidence of rodents, but made sure I have my food sealed up well in my pack in the tent. There’s one resident bird that was here when I arrived and keeps swooping in and out. Hopefully it will relax overnight. I have the door open so I get fresh air and the draft from the wind is making it perfect so I feel like I’m still outside. Very happy with this strategic choice tonight! My cut finger is feeling much improved, but I’m still giving it another day before I check it again. It’s only 9:30pm, but I’m ready to catch up on my sleep I missed out on last night.