Day 33: The Cool Before The Heat

I slept great in my little ramshackled building. Surprisingly, no resident rodents. Today felt like it had two halves. I started at 8am, and the first half was the summit of Pic du Canigou. After about an hour of downhill from where I slept, the climb began. It was 3600ft/1100m of mostly gradual climbing that took me 3hrs. The first hour was generally in the shade of trees on a wonderful path that I quite enjoyed. 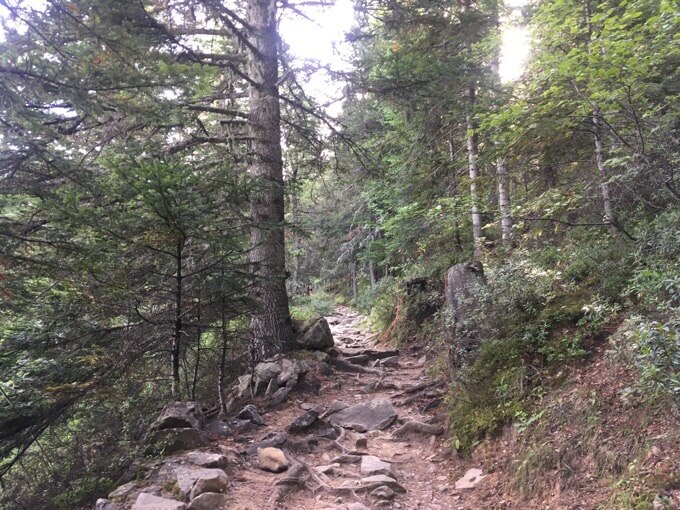 Pic du Canigou is a popular day hike on both sides of the summit, so there was no lack of people. Once above tree line, the gradual switchbacks continued on up. The strong winds of the past two days had calmed and it was perfect temperature with a slight breeze, yay! 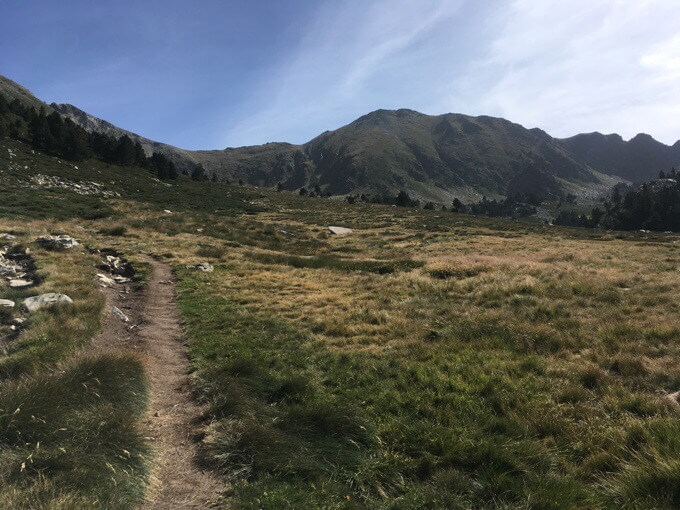 The summit is the darker peak further away. I could see people up there all the way from here. 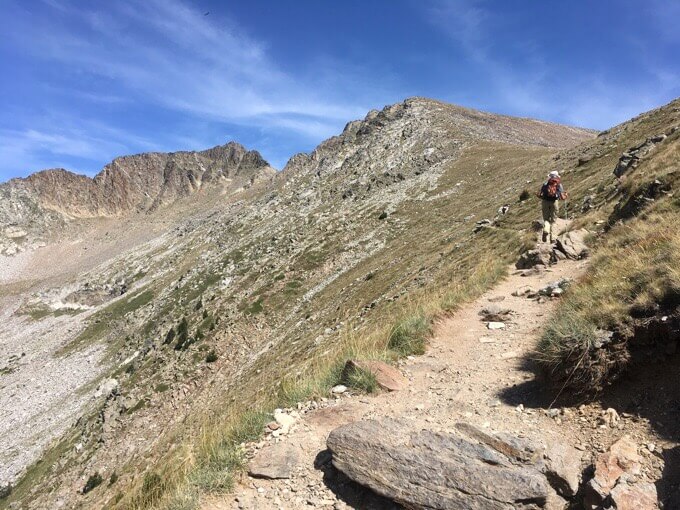 The final 20mins or so of the climb was fairly vertical scrambling that required hands and felt like climbing a ladder to me. What I didn’t like was that it was a fairly narrow corridor for the best route. With many people going up and down, I had many times that I had to wait. I don’t love heights and the longer I stood there, the more anxious I got. Normally, I’d just climb up and get it done before I could overthink it. Waiting for others to go through gave me ample opportunity to think about all the ways it could go badly. A rock falling, someone tumbling down, a good gust of wind, etc. Thankfully, it wasn’t too busy and I was through that bit fairly quickly. 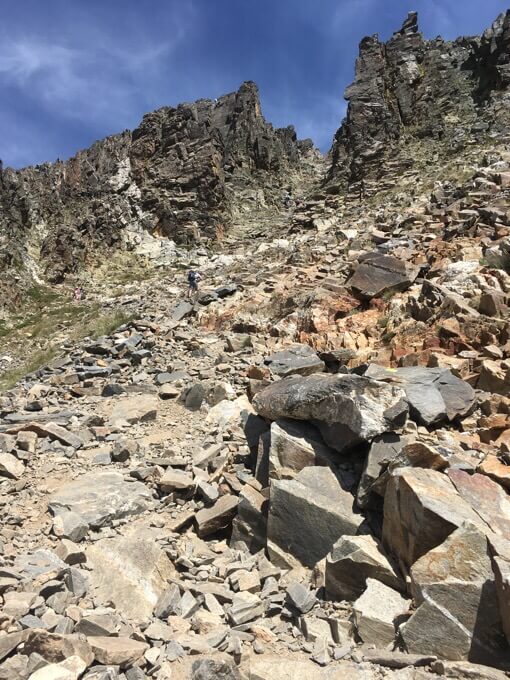 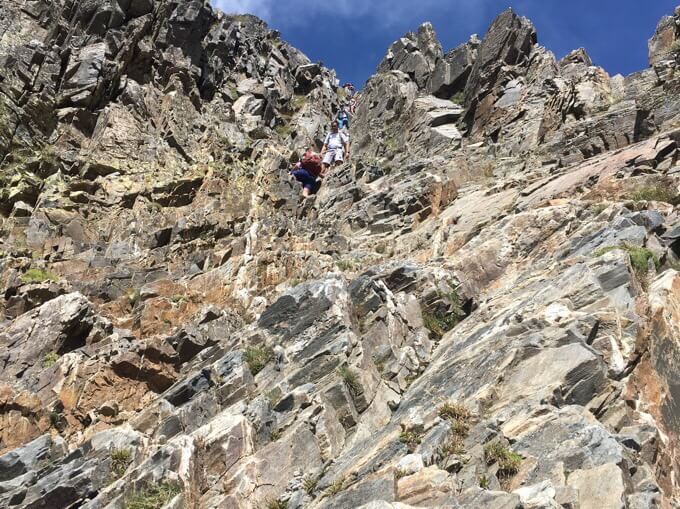 And one looking back where I came. 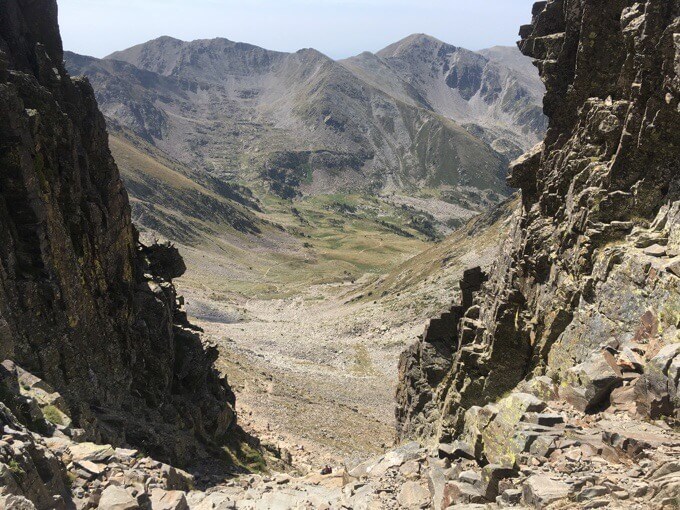 Since even more people summit from the side I’d be going down,
there were a ton of people up top. 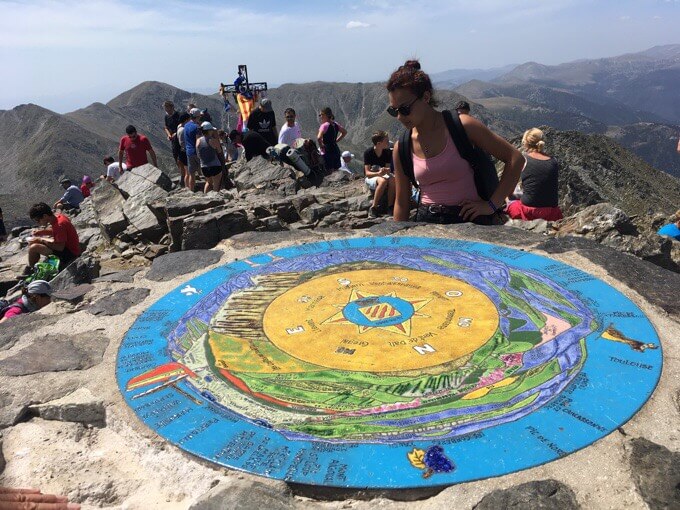 I found a spot off to the side and had my lunch. It cleared quite a bit by the time I finished, so I was able to ask someone to take a summit photo. I felt so rushed with many around that I forgot to take my sunglasses off. Oh well. 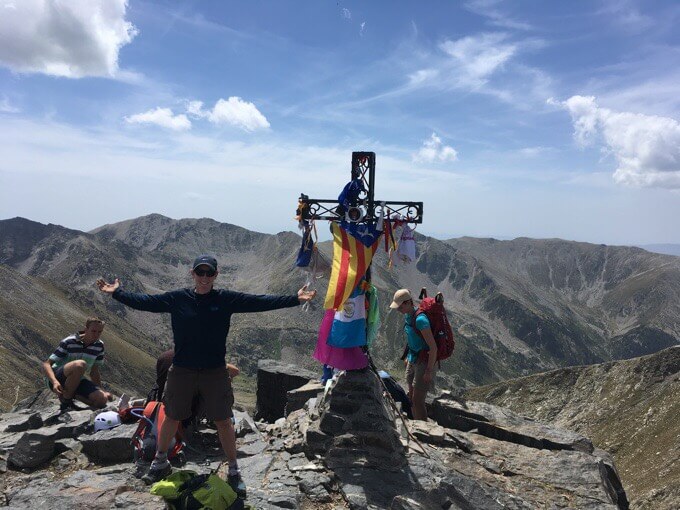 The descent was enjoyable and I didn’t have too bad of a crowd to wade through. Over today and the first half of tomorrow, I will drop majorly down and probably into heat. The summit was at 9134ft/2784m and by lunch tomorrow I’ll be at the village of Arles-Sur-Tech at 925ft/282m. Yep, getting closer to the Mediterranean Sea and the end of the HRP in three more days! 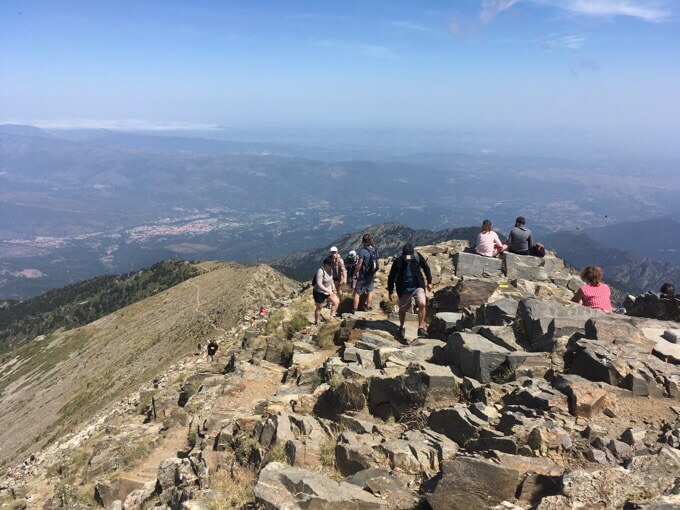 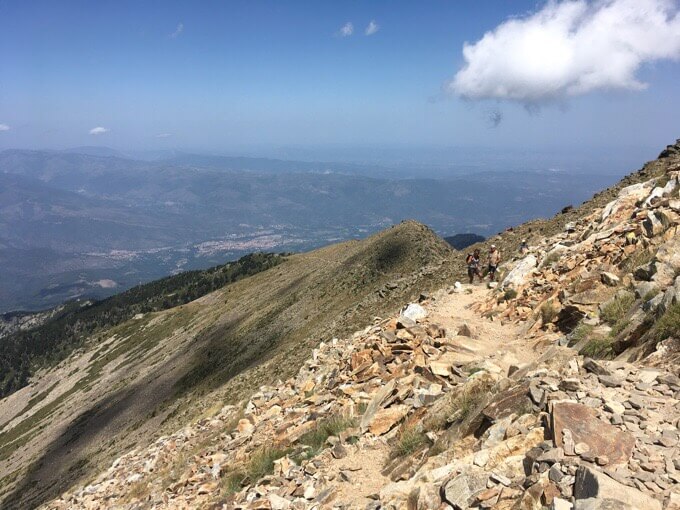 As I went down, clouds moved in on the peak. There wasn’t rain in the forecast that I knew of, but it was quite humid and the air felt like it needed to release some precipitation. Many hikers were concerned and turning around once they turned the corner to see the clouds. It made the decent much cooler with less sun. 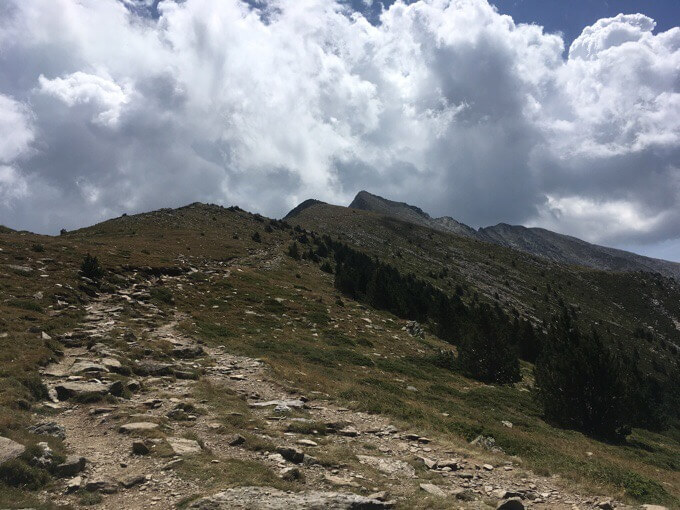 The second half of the day went away from the action of Pic du Canigou and was much quieter and greener. Just nice trail that overlapped a lot with the GR10 and wound around along a nice traverse while gradually going downhill. 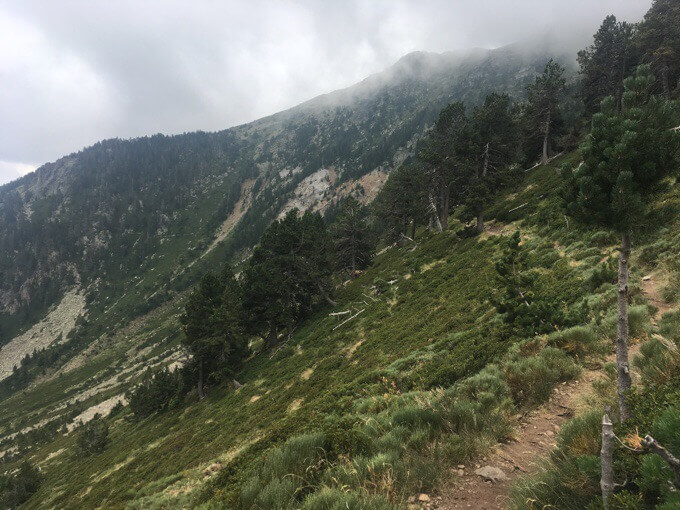 For the second day in a row I had a stretch that felt like the PCT. It was a great wooded stretch for the last 1.5hrs that was also traversing along the steep edge of a valley. Normally, out here in the Pyrenees, the route dives down the middle of the valleys. This one nicely contoured the whole way around and just gradually went down. Also, like on the PCT, I was covered in dirt that gets kicked up. I haven’t been this dirty all route. 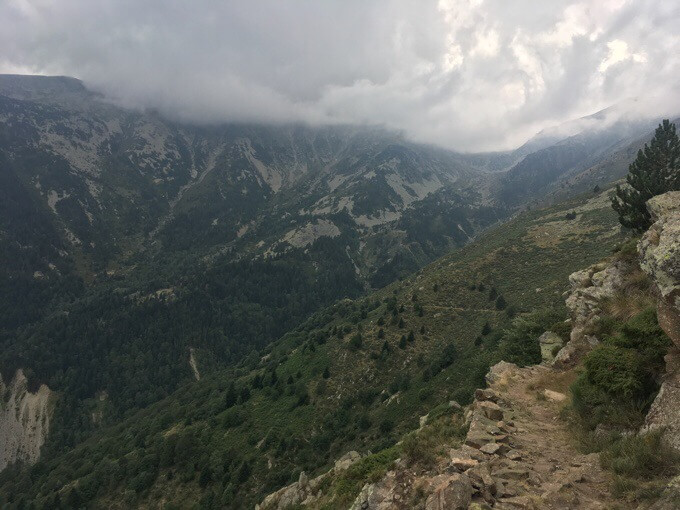 As you can see, some low fog moved it and it cooled slightly. Just as I was thinking of how badly I needed to rinse off, the rain started. This is really only the second time I’ve had to hike in rain all route, so I was happy that it’s just now happening. Plus, I was in a forest instead of out in an exposed area. All that dirt I had caked on my legs was gone in no time. I got my shower! It was warm out, so the rain wasn’t cold. My umbrella was awesome once again. My feet got pretty soaked as the trail became a bit of a gutter for all the rain. 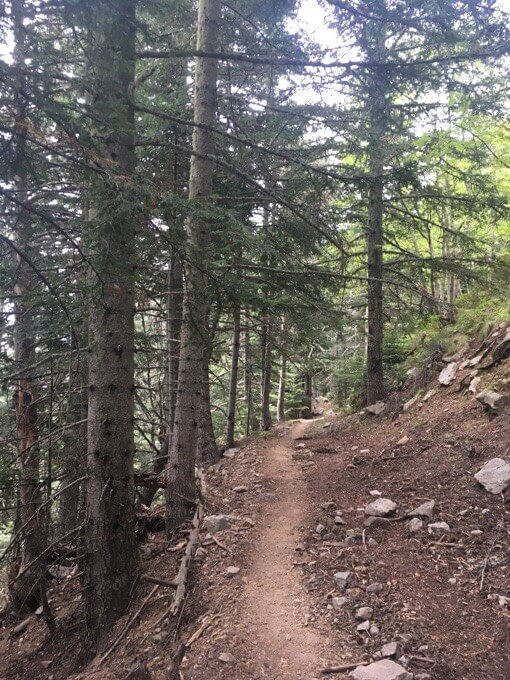 I hiked about 45mins in it, and was approaching a water source. I had planned to go another hour over one more short climb, but with the rain, I definitely wasn’t going to climb up into the fog. I knew I could camp at the water source, and I saw there was a building there on the map, but it wasn’t mentioned in the guidebook as a place people slept, so I figured it was nothing. When I arrived, it was like a dream come true! It was a homey place I could get out of the rain and actually sleep comfortably! 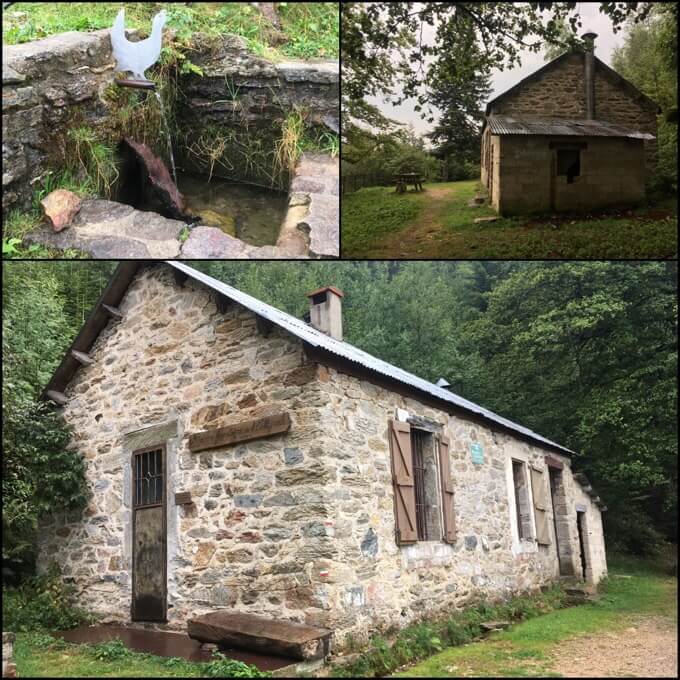 Two day hikers were there for a bit trying to wait out the rain, but left after 30mins. It is a wonderfully spacious place with a table inside and an upper area I can spread out on. I like to sleep up high in these places further from little night crawlers in theory. So, I went all trail without sleeping in a refuge of some sort and now I’ve got two nights in a row of having places all to myself. Score! 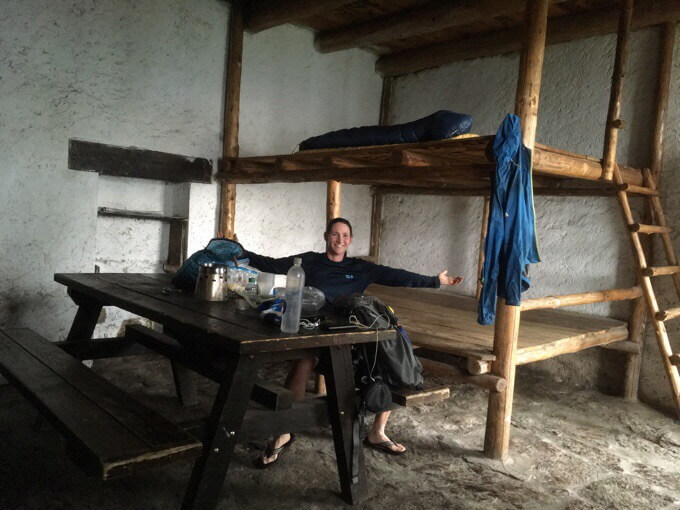 I will be quite surprised if there aren’t any rodents tonight. I feel like I already heard some scratching and it’s not even dark. The rain continued until 7pm, so I was quite happy with my choice to stop at 5:15pm even though I’d planned to go a bit further. I’m still on schedule to finish in three more days, so I’m happy. The bandage on my finger got wet, so I took it off and it’s just about healed. It’s feeling more like a paper cut right now. Enjoying my final night before the heat sets in. I’m off to watch the rest of the Money Monster movie I started the other night. It’s ok, I’m waiting for the big twist that must be coming.