Welp, not much to say about today other than that it was in the forest most of the day, and it was HOT. I got going at 7:40am after a nice night in the Maison Forestière de l’Estanyol with no little guests overnight. I had a bit of a climb, and go figure, the day it really rains, I have the rare narrow trail with brush out here, so there was a slight car wash effect. 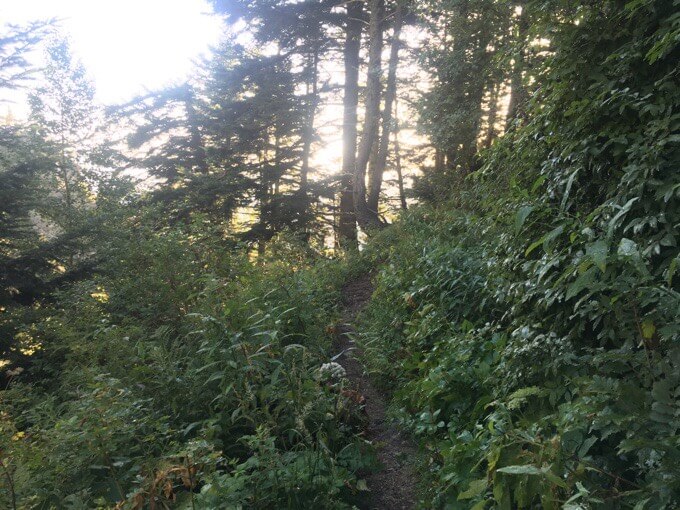 Then the drop down to the village of Arles-sur-Tech started and I’m on the GR10 for most of the remainder of the route for the next three days. It was a 4,754ft/1449m drop over 4hrs. Surprisingly, my legs didn’t notice it. Either I’ve adjusted, or it was gradual enough that my legs didn’t get wobbly. Not much to say about the scenery. It varied a bit, but was mostly brushy woods. Sometimes it would be a nice dirt or paved road, sometimes nice trail, and sometimes that crappy trail with loose rocks all over it that acted as ball bearings. 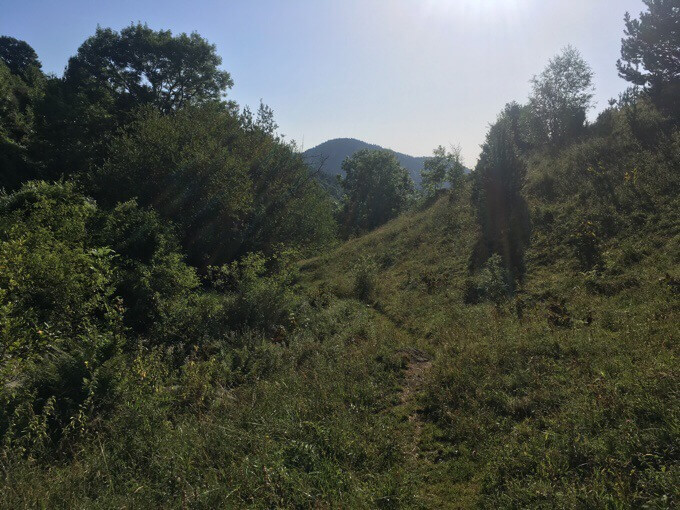 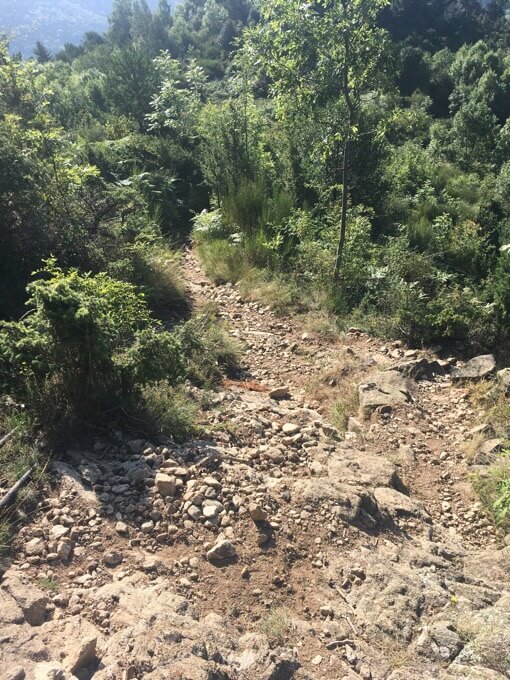 On the way down, the most frightening thing to happen to me in quite a long time occurred. I had to go through an area with sheep and three sheep dogs went ballistic. I didn’t expect it as there were only a few sheep there. They are so good at their job! They basically hide and then jump out in full force very aggressively. I do my best to tell myself they won’t bite and that I need to just talk to them calmly and move slowly. They surrounded me and I could feel their breath on me as they barked and lunged at me. Then, they calmed and backed off and I slowly continued on. Then they came charging back like 5 seconds later and I really thought they would tackle me. One of them jumped up on my pack to push me forward. Then, they suddenly just stopped and trotted off. It took me an hour just to get the adrenaline of fear out of my system! 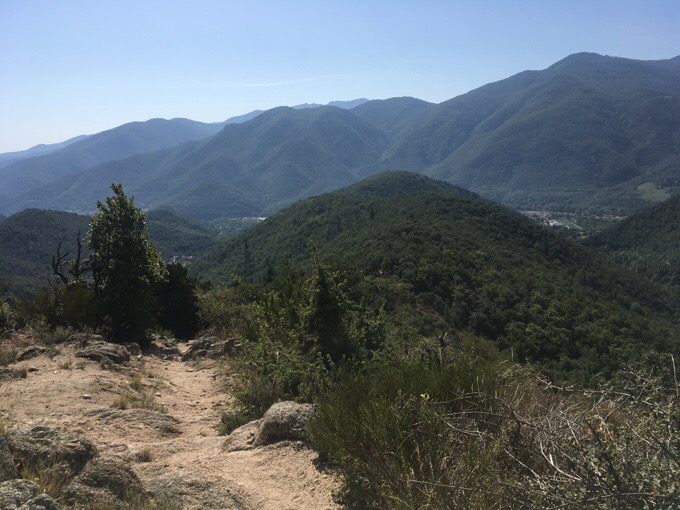 Since Arles-sur-Tech is at 925ft/282m, it got much hotter as I went down. I could see a pool and hear kids for quite awhile. It felt cruel to have that pool right where the trail drops into this notoriously hot part of the route. There were a lot of bike paths and other paths forking off and I managed to miss a fork right at the end. I had a brief bushwhack to get back on rather than going back uphill and backtracking in the heat. I should have backtracked. The brush was dense and right at the end, I caught my leg on a vine with thorns. Got a great cut on the bottom of my leg and it bled and burned more than it would have with all the sweat. Yeah, that will feel great when I walk into the Mediterranean Sea in two more days. As soon as I hit the pavement to town, I immediately walked over to the pool knowing they’d have ice cream. The guy at the desk asked if I wanted to swim. Oh man, I don’t know if he was serious cause I was so dirty, but I do wonder if he would have let me jump in with how hot it was. 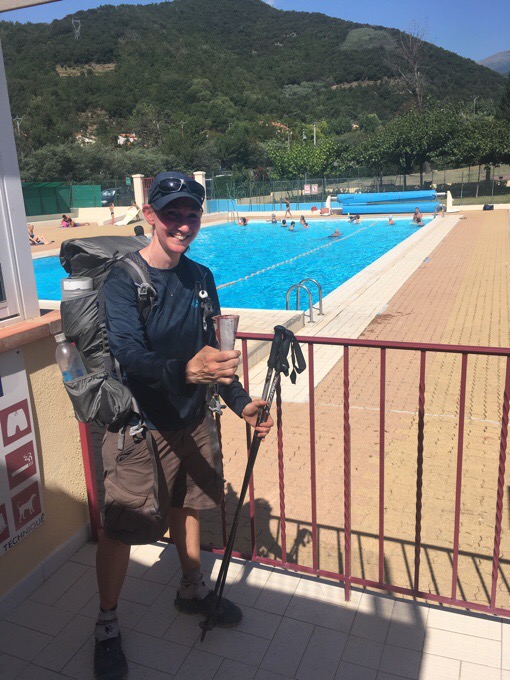 Then I walked through the village to the supermarket, which was one of the biggest ones all route. I was really wanting cold water, so I paid for refrigerated water and it was so worth it! I sat outside in a shade spot and ate my lunch of a ham sandwich, choc chip cookies, and a tub of raspberry sorbet that I imaged was like getting a Jamba Juice since they didn’t have anything else similar. I barely made a dent in it, but it was totally worth it! 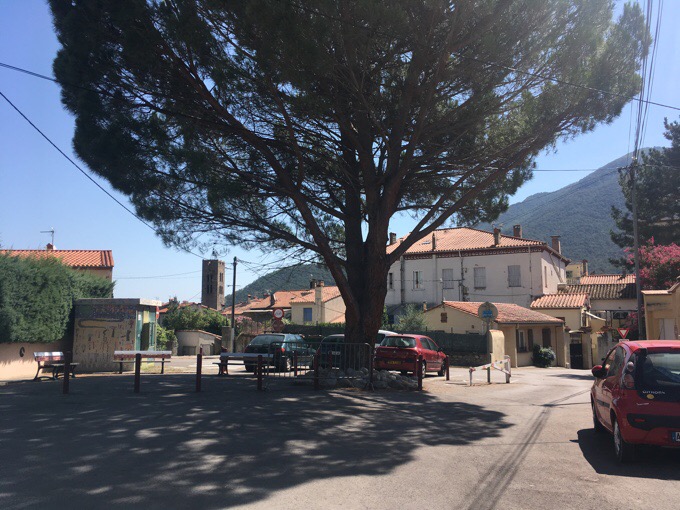 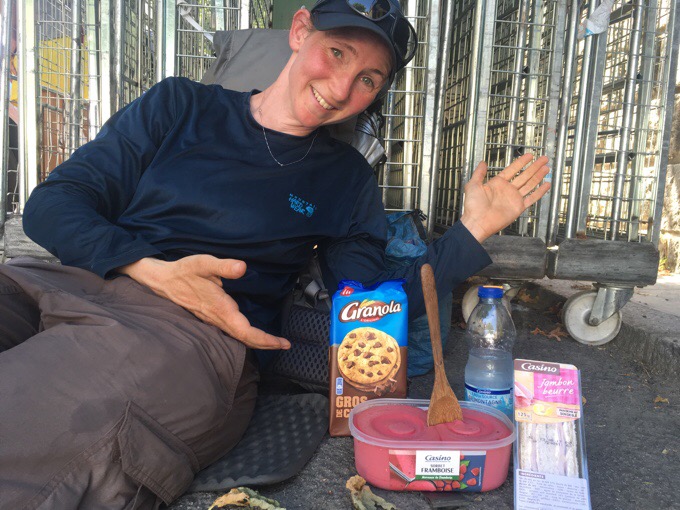 Next up, was the climb back out of the village. It was 2034ft/620m and about two hours of steady gradual climbing. It was 95F/35C when I started the climb, whew! It was brutal in the heat, but thankfully almost all in the woods. I was dripping sweat and saw a few GR10 hikers along the way that were just as drained by the heat as me. It was exhausting and I had one focus, which was to get to a tiny stream an hour or so up so I could take a break and cool off. When I got there I drank another liter, poured two liters on my head, and took my t-shirt off and drenched it, and put it back on. I was glad it was shaded so I didn’t have to wear my hat. I didn’t listen to music hardly at all today as I couldn’t bare to have any headphones in and make it hotter. There was nothing to take photos of, and my hands were so sweaty that I had trouble drying them enough to respond to my touch. I did get this one that pretty well captures the sentiment of the afternoon. 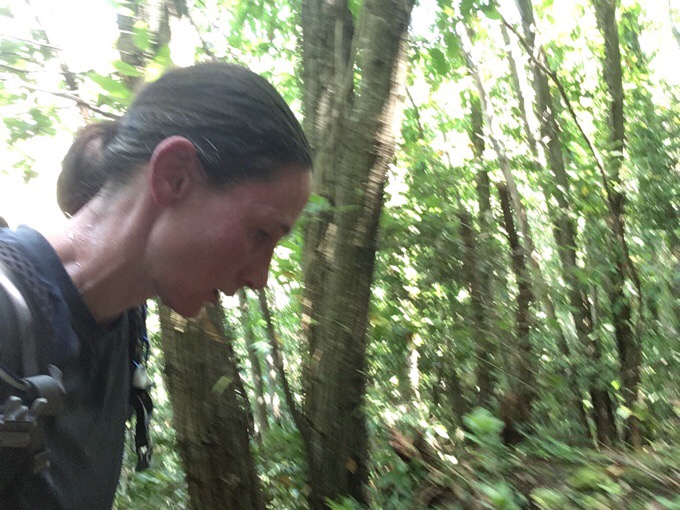 Over the next few hours, the trail passed several options for stopping at a gite or some kind of accommodation. I did my best to ignore them and not think of the possible cold drinks or ice cream they might have. The final one was a small hamlet I reached at 5pm. They had a little fountain that was barely dribbling out lukewarm water that emptied into a tub of large tadpoles. I looked, and it was my last source for the night if I was continuing on. I had no patience for the fountain and got my pot and scooped up three liters to filter at camp, careful to dump out the tadpoles first. I hiked up telling myself I had to go till at least 6pm. 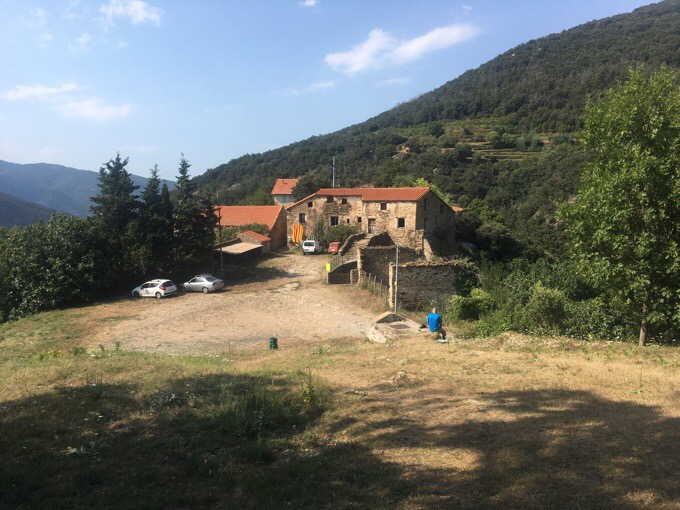 I had a few motivators. It was not cool, but less hot as it was getting later and this climb was on the shaded side of the mountain. If I stopped now, I’d just be sitting in heat, so I may as well get it over with. I knew the higher I went, the cooler it would be to tent. I’m also so close to the end that I know how many hours of hiking I am away from being done. I wanted to get an hour closer! 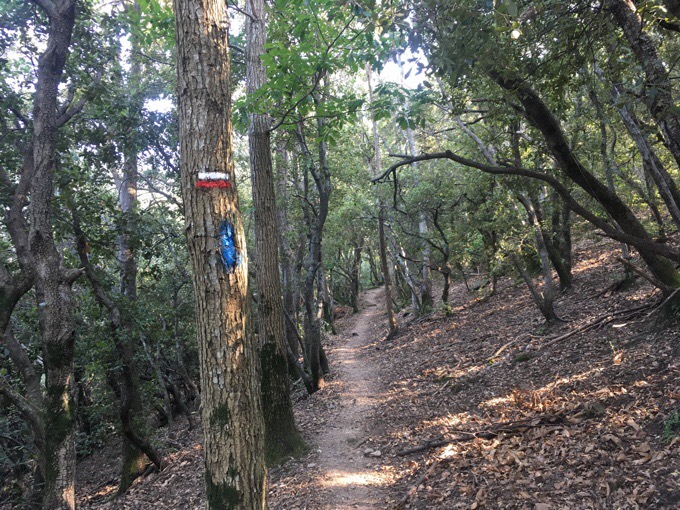 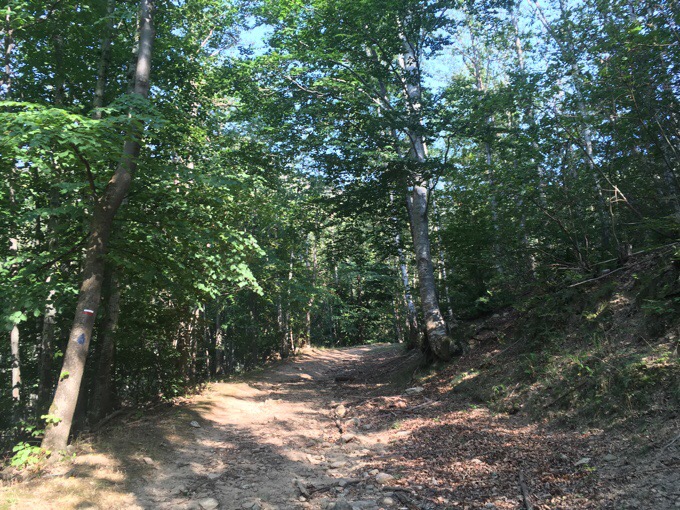 Just as I was reaching my goal, and dripping sweat, I came to a small cool stream crossing the trail that I’m sure is not a guaranteed source, but it is today. Dammit! I carried 6lbs of water up here unnecessarily!? I’ve been sending Why Not and Jim tips, and this one will be quite valuable. I found a spot in the woods near the water and set up for the night just after 6pm. I immediately mixed up a raspberry lemonade and guzzled it down with the cold water. I was so glad to be able to clean off with the water. Oh man, it’s 9:30pm now, and it’s still so hot, I don’t have clothes on and don’t want to use my sleeping bag. It’s starting to cool though, so I think it will be cool enough to sleep in an hour or so. Whew! Two more days! 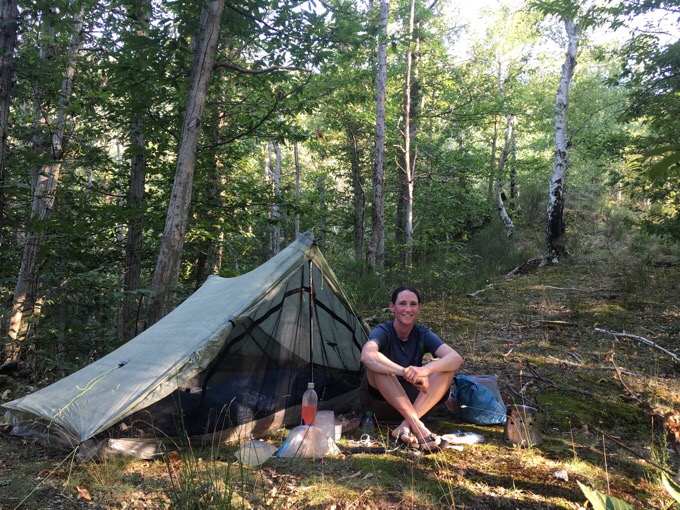