Day 36: Marching To The Mediterranean

Today was the day, the end of the Haute Route Pyrenees and the march to the Mediterranean Sea! Our plan was to be up and out early at 7am to get a jump on the day, but the weather had other plans. There was fog and lightning as we were packing up. Then right about 7am, the rain came down (not too hard) and some thunder and lightning came through. We agreed to wait and see if it passed, and it did after 30mins. I looked up the weather and it seemed there would be spotted rain for the morning and clearing by noon. We decided to go for it and were hiking out to wind and sprinkles at 7:45am. That sounds not great, but we loved it! The scenery was wonderful. It was warm enough to not be cold and the wind kept us pretty dry between drizzles. 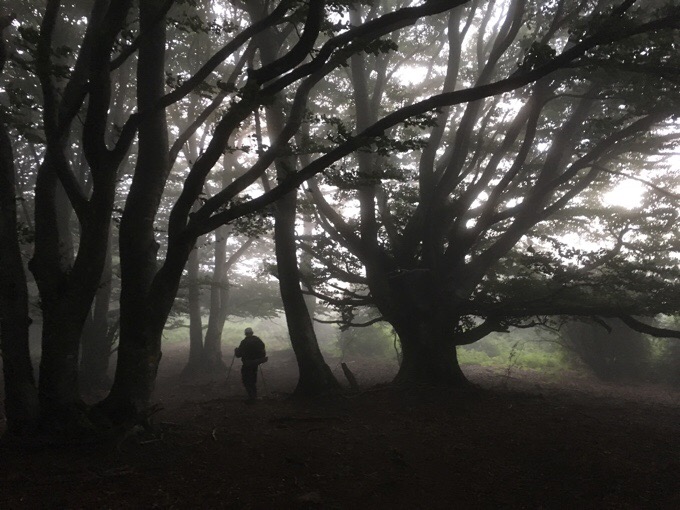 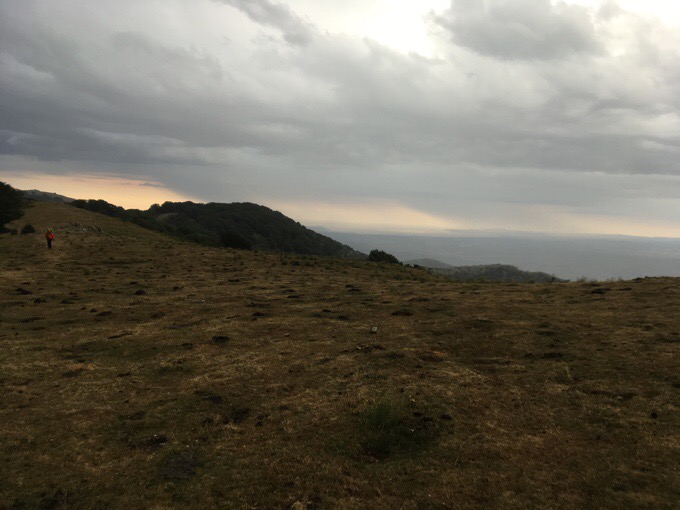 Much of the hiking was along ridges with views of the Mediterranean. 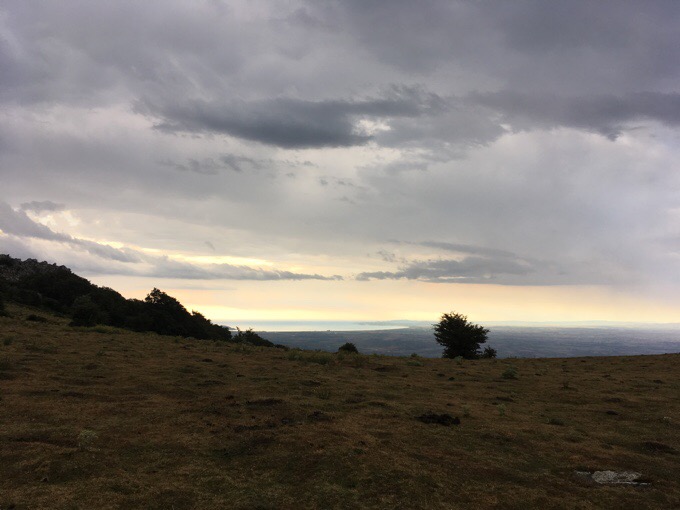 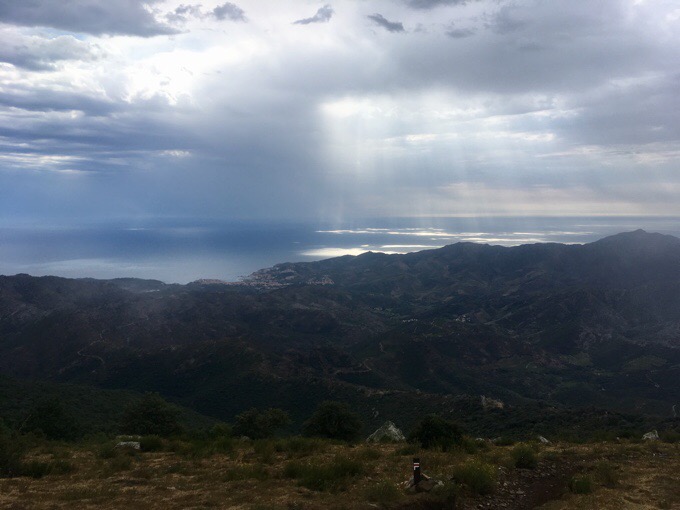 We had periods of fog, but it never lasted long and made for more magical views. 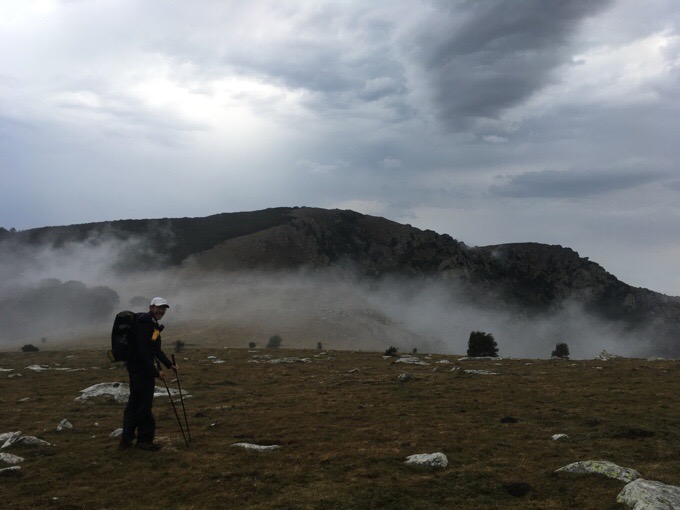 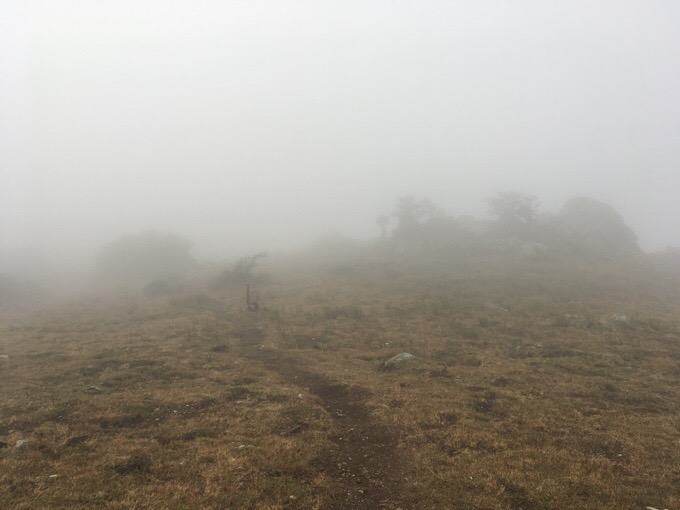 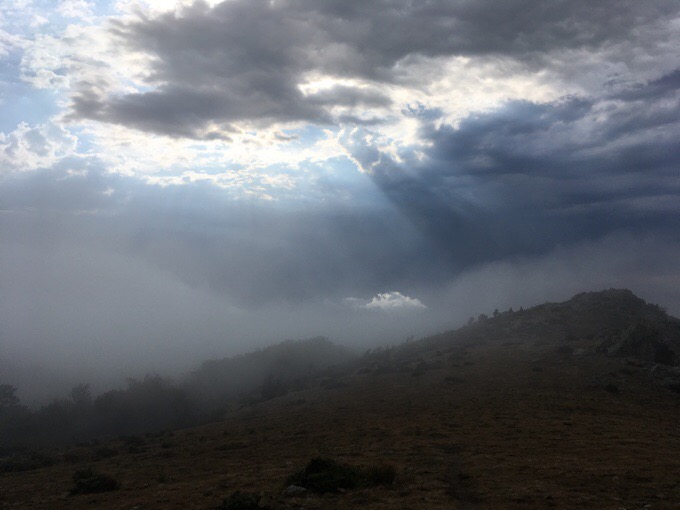 As we got closer, the periods of rain got shorter. We laughed as we took our rain jackets off and back on again four times, each with the hope we wouldn’t need them again. It’s always fun to share the finish with another hiker and it was great to be with Soap for the morning. We made really good time and decided to hike on through so we could have a celebratory lunch in town. It’s funny because one of the first things we discussed yesterday is American hikers’ obsession with burger in town. I made it clear that a burger and milkshake was exactly what I was finding once we finished and he kindly obliged. My last burger was in Gavarnie 23 days ago. That’s just unacceptable! 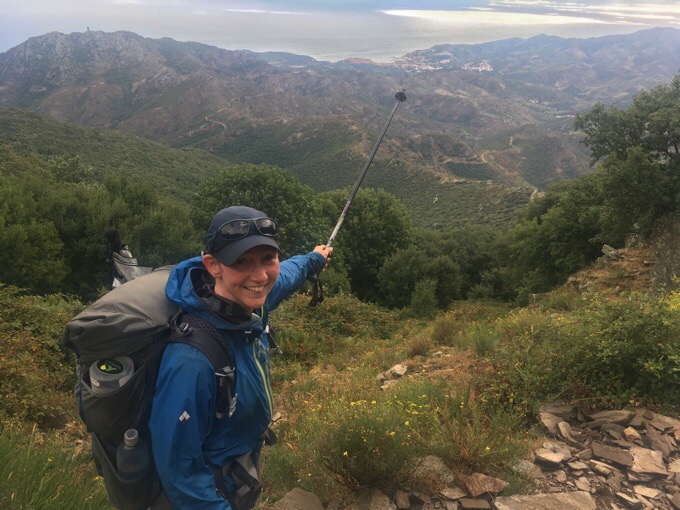 As we approached Banyuls-sur-Mer, the blue skies came out to stay and the wind kicked up. In the brief moments of no sun, we felt how intense the heat could have been today. Man, we were lucky today to have such a cool finish. 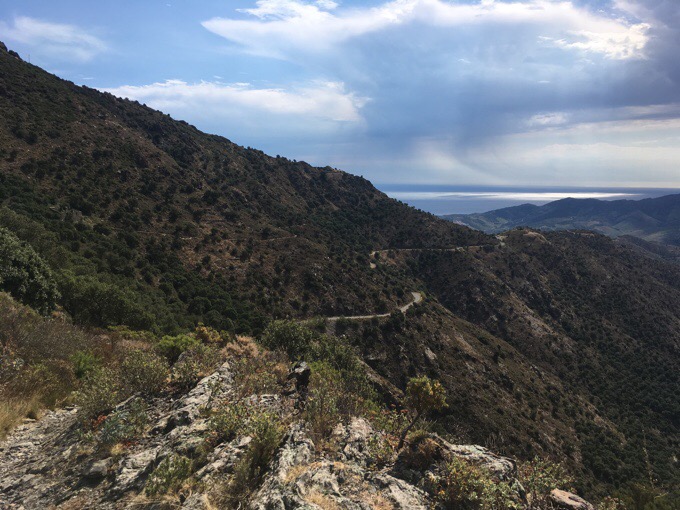 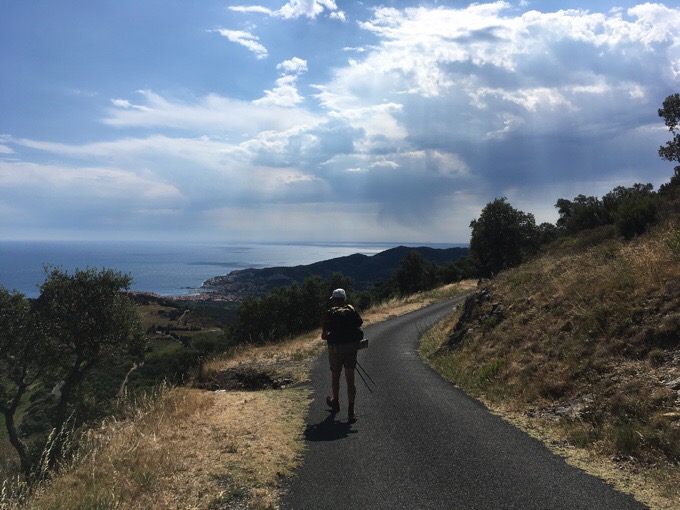 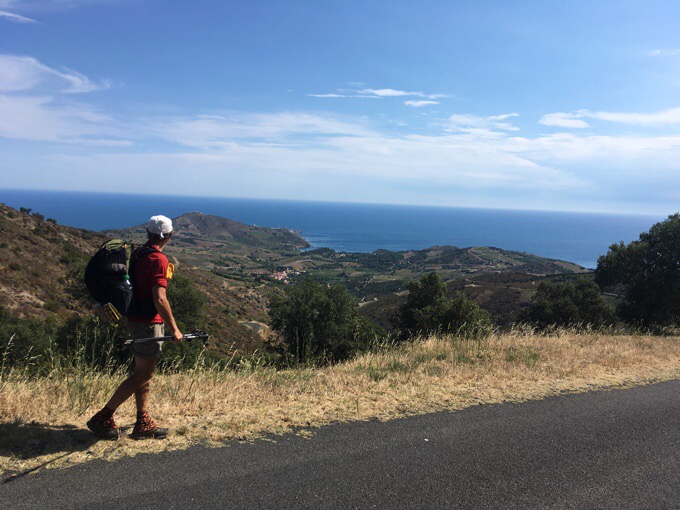 It was a bit of a tease as we felt like we could see the end for a couple hours before we got to it, but it went by pretty quick and before we knew it, we were walking right through the touristy village on a Sunday and headed to the Mediterranean Sea. 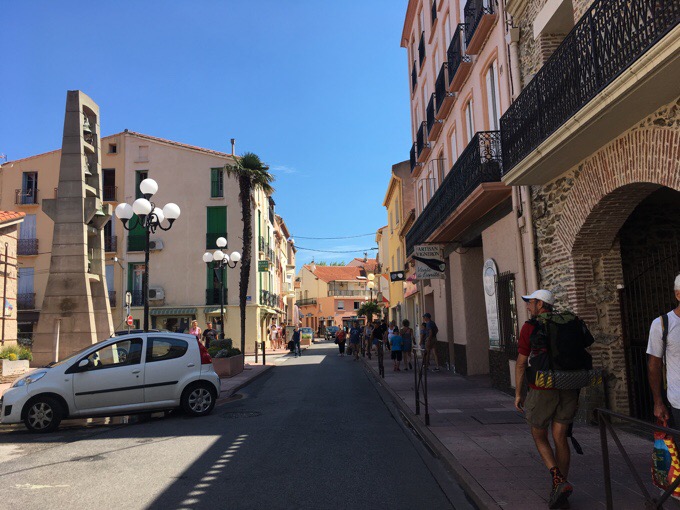 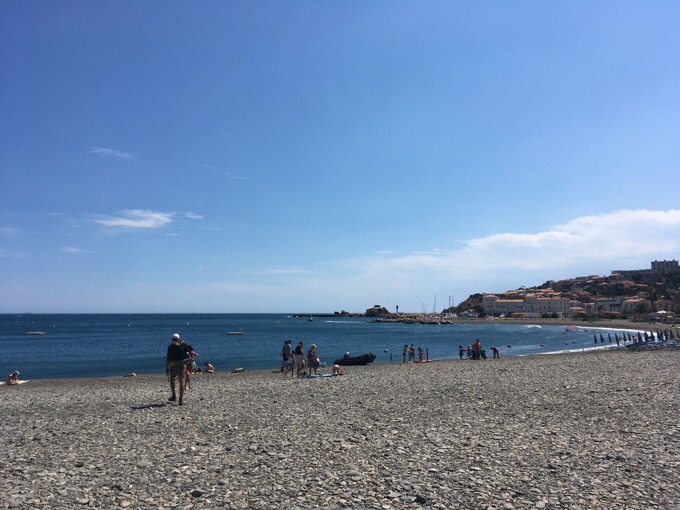 The water wasn’t very cold at all and there were fewer people on the beach than we expected. It seems things start late in this part of France, so I think we were ahead of the crowd. It was pretty fun, and even after having finished many trails before, this one felt just as special. The HRP is relatively short compared to some of the other long trails I’ve done, but this was a tough one! It felt like an accomplishment to have completed it. 550mi/885km through the length of the Pyrenees from the Atlantic to the Mediterranean. 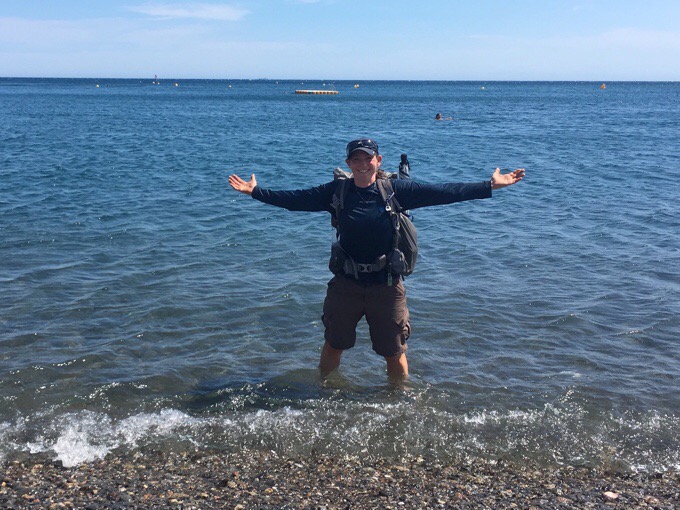 There’s some artwork on a nearby building for the official start/endpoint of the GR10, which parallels the HRP and runs the Pyrenees on the French side. We went over there and I really liked that somehow even more than the Mediterranean. Soap had done the whole GR10 with bonus side trips and a couple zeros in 41 days. Quite the accomplishment. I started in Hendaye and did overlap with the GR10 at times. Since the HRP is more of a route (with multiple versions and guides), it was cool to have something that kinda validated an accomplishment of something quite challenging. 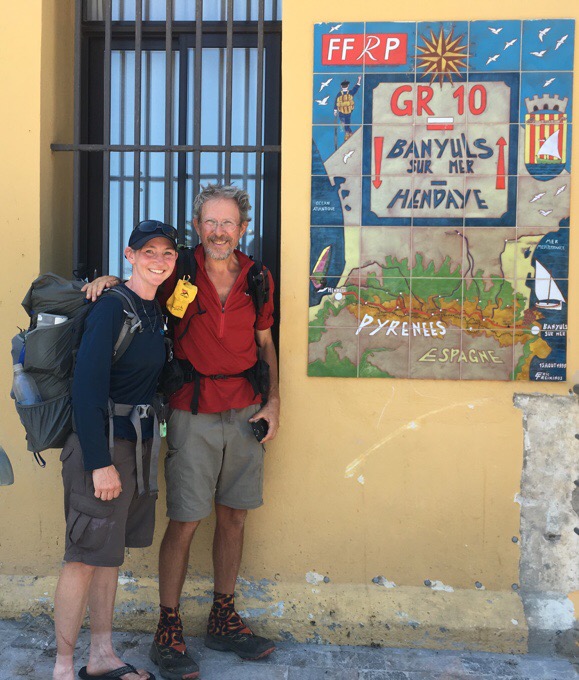 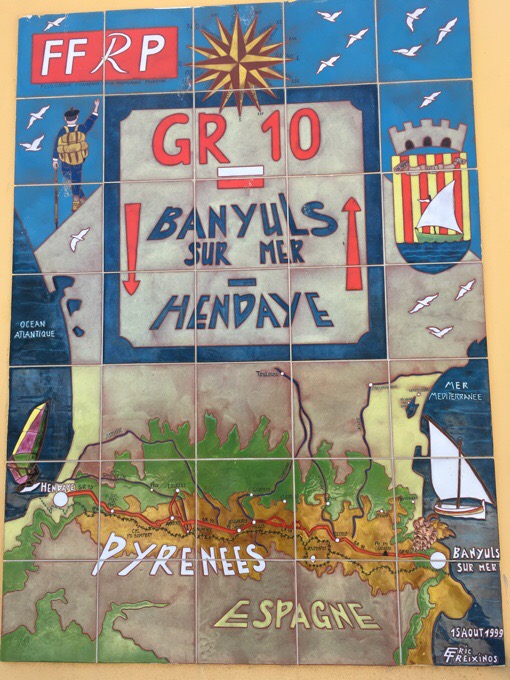 If anyone is thinking of doing the HRP or GR10 or GR11, know that these are very challenging and physically demanding routes. Yes, extremely scenic, but you have to work hard for those scenic rewards. I’m ready for a couple days of rest! But first that burger and milkshake! 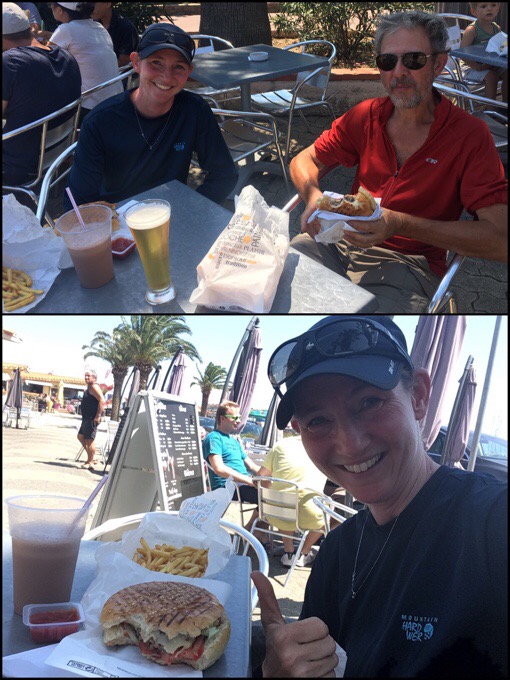 This really may be my favorite ending to a trail. You finish and immediately have tons of options to celebrate, and my hotel (Hotel Canal Banyuls) was just a few minutes away. Immediate reward! The hotel was very basic and minimal, but you get what you pay for. It was great to have the rest of the day to relax and get things cleaned and dried. I treated myself to a celebratory steak dinner with a wonderful salad. As I sat at the outdoor seating, I was in my own world of contentment looking out towards the ocean and then to the side of me was an almost full moon rising up and the art for the terminus within sight. 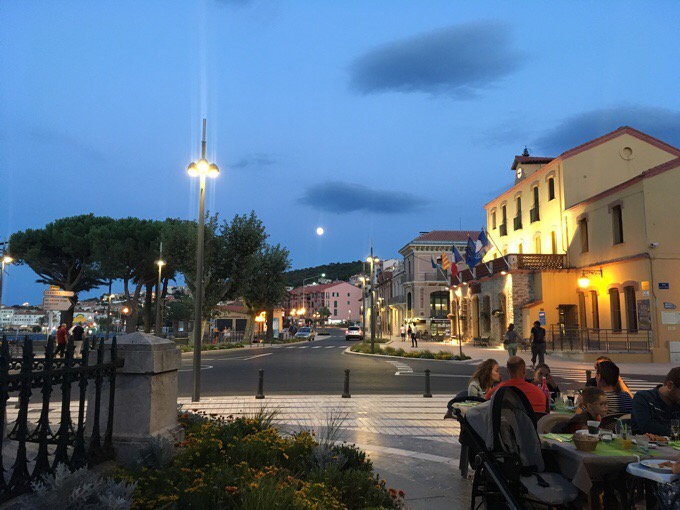 I have to say, it’s one of the more satisfying finishes I’ve had. I know this was scenic, but I want everyone to be clear that it’s a ton of physical exertion to hike in the Pyrenees. You’ve been warned! Also, known that I did do this at a pace many wouldn’t enjoy. The book recommends 45 days without counting rest days. I did it in 36 with two zeros and a few neros. I also chose to hike it outside the schedule that has you landing at a refuge each night. Many may find it more enjoyable and restful to hike shorter days to the refuges each night and to avoid needing to carry much food weight. The cool thing about the Pyrenees is the freedom of options in that way. It may not be flat, but it has great options for building rest between those ups and downs. Just go into it knowing it will require a lot of exertion. I’m sure ready for some time to recharge.

Tomorrow, I will take the day to take a train to Geneva, Switzerland, the start of the main part of the GR5 that runs the length of the French Alps along the French side of the France/Italy border. I’ll be going from there to Nice (actually the Menton scenic ending). I’ll take a zero to get situated in Geneva before I start, so I’ll do a post in a couple days as I transition. French Alps, I’m comin’ for ya!