I slept just ok at the hostel in a room with three others. I definitely need to catch up on some sleep after three nights in a row of not getting as much as I should have. I felt pretty low energy all day. I decided not to set an alarm this morning, but was still up early enough to get to the Le Brévent gondola just five minutes before it started running for the day. That was just random luck because I figured it started pretty early. I was in one of the first few gondolas that headed up at 8:15am. 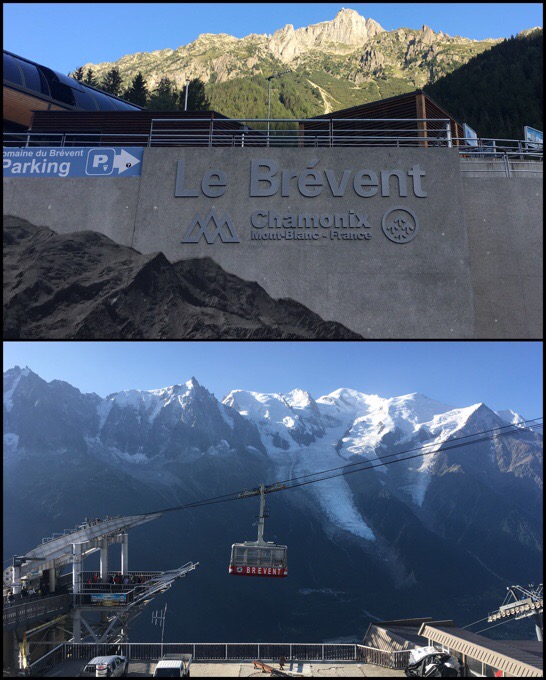 The gondola doesn’t go all the way up to Le Brévent. It stops halfway and I transitioned to a cable car. It was about 8:45am when I started hiking the long descent from Le Brévent to the village of Les Houches. It did feel a little silly to ride a cable car up so I could hike right back down to a village just minutes from Chamonix by car.

The descent to Les Houches was 4976ft/1517m and took the rest of the morning. Fortunately, downhill doesn’t affect me as much as most, but I can understand why this one stands out to people as one that’s particularly hard on the knees. It was great views with Mt Blanc still directly across the valley. 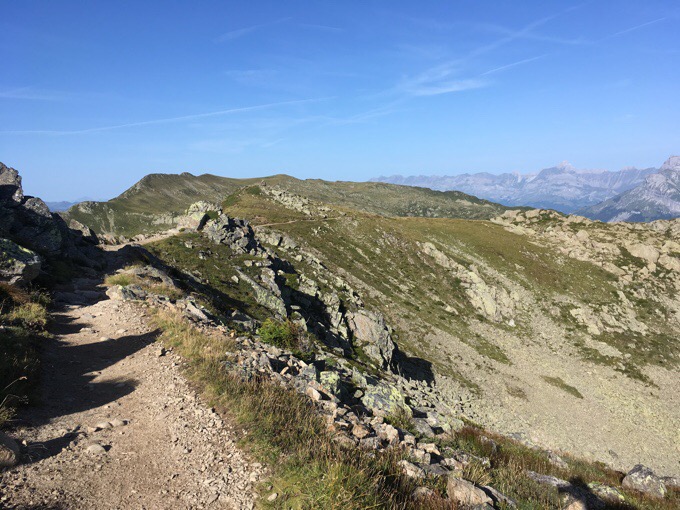 I saw my first ibex too! Hopefully, I’ll see more and get better photos. 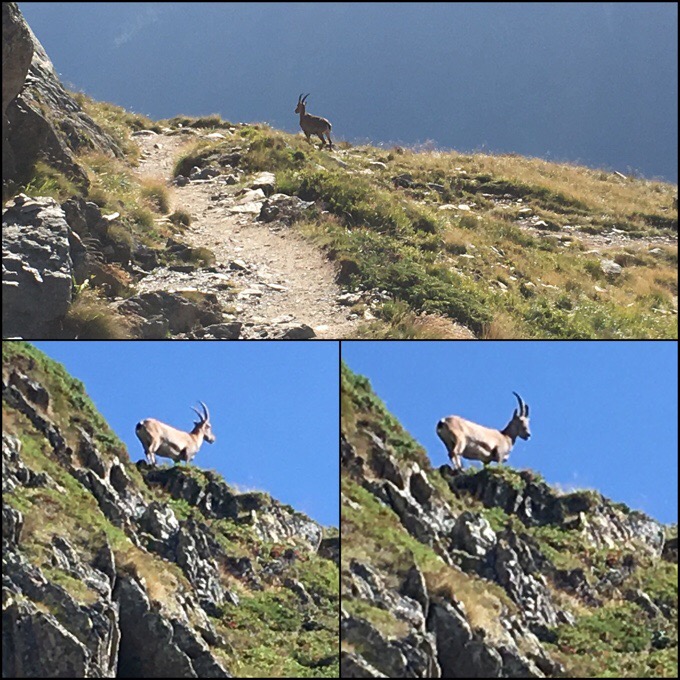 Tons of people were out and it got a bit annoying since the courtesy is for the person going downhill to stop and allow the uphill person to continue when the path isn’t wide enough for both parties. It just felt like I was stopping a ton and it really threw off my rhythm. 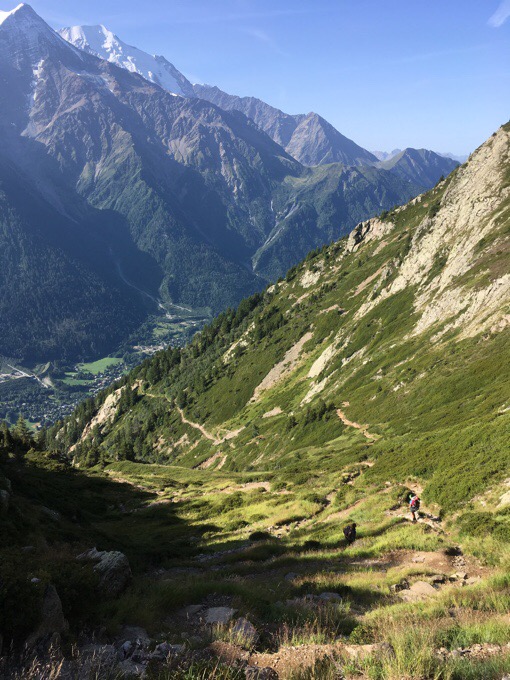 It was pretty warm and hazy as morning passed. I arrived in Les Houches, and for lunch I sat in the grass in a shaded area outside a church that had a fountain and picnic tables. Two groups of hikers were there totaling about 16 people. They all seemed to be doing the Tour Du Mont Blanc (TMB), which is a very popular loop that many people do for about a week and a half. I overlapped it most of the day today. Once I do this and the Haute Route, think I will have done half of the TMB. I may return and do the TMB or just the half I will not have done someday, but it hasn’t strongly pulled me for some reason. 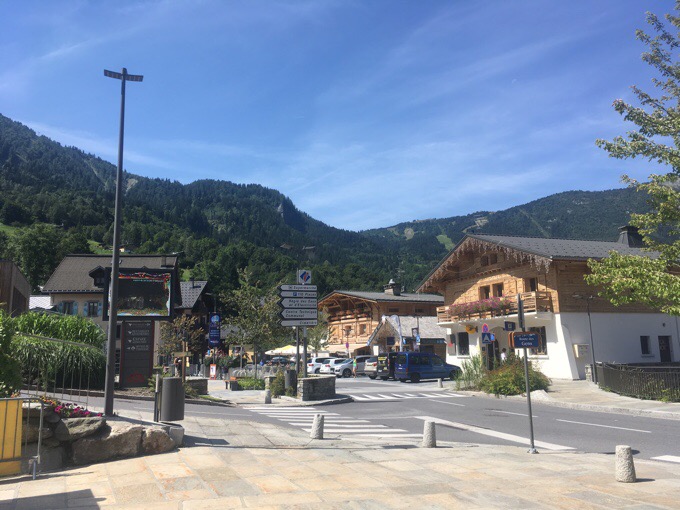 The afternoon was spent mostly climbing back up dirt and gravel roads and walking by ski resorts, restaurants, and refuges. It was quite busy. This area is particularly congested, and I understand that. I do enjoy that I easily used tap water and restrooms today with how frequently I walked by places. 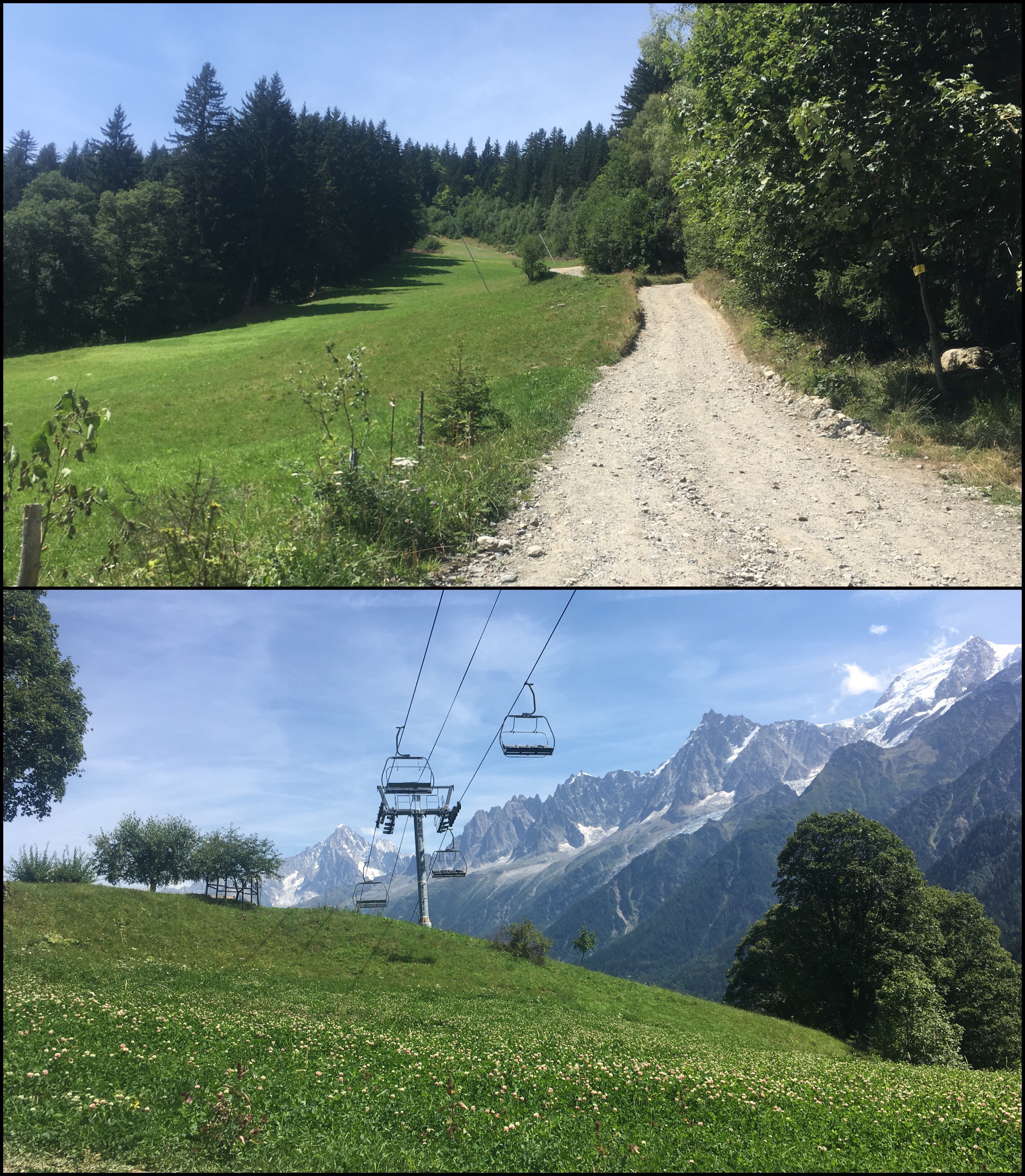 My favorite moment of the day was walking up a road just after I passed a group of TMB hikers when four Japanese tourists came walking down the road towards me. Luckily, I didn’t draw attention on my own, but as soon as they saw the group round the corner, it was like they saw celebrities. They squealed, spoke Japanese, ran up to the group, and started posing with the hikers taking photos super excited. It was really entertaining, haha. 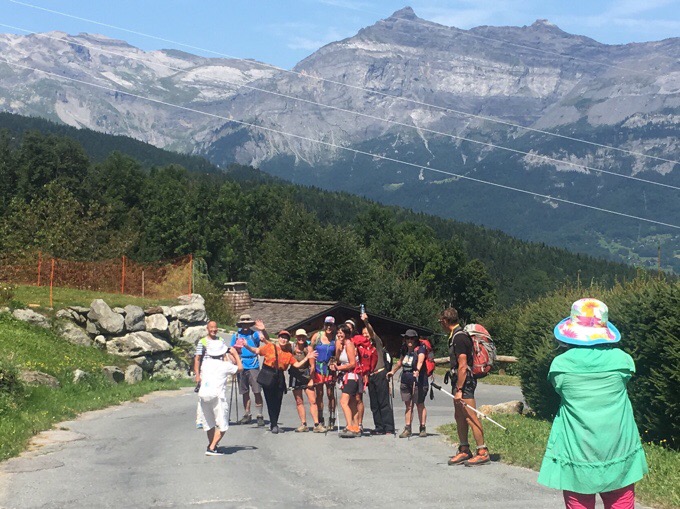 Then my worst part of my day. I reached in my side zipper pocket for my MP3 player to realize I freakin’ lost it probably at lunch in the grass today. I had my MP3 player clipped to me before lunch, and I think I threw it in my pants pocket when I sat down instead of its proper zipper pocket on my pack. It must have fallen out, ugh. I have my music and podcasts on my phone, so I’ll wait until I go home to get a new one. I’m bummed because I have enjoyed the radio on my MP3 player…and I keep losing stuff! So frustrating!!! 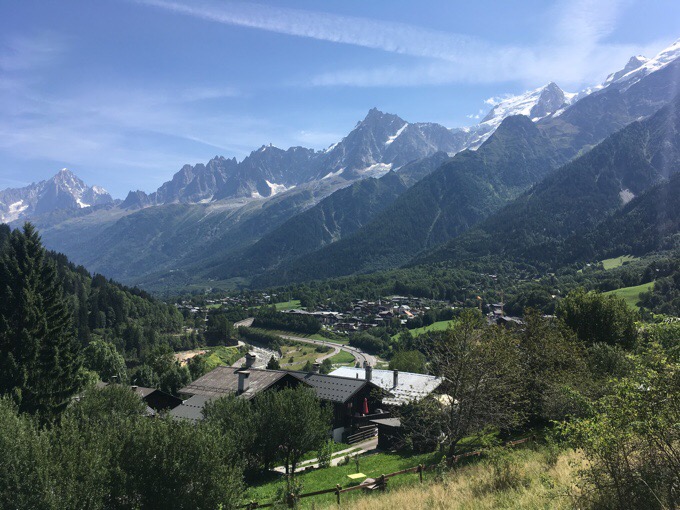 Looking back down as I climbed up from Les Houches.

As I walked, it was nice to see a new side of Mt Blanc I’d yet to see. 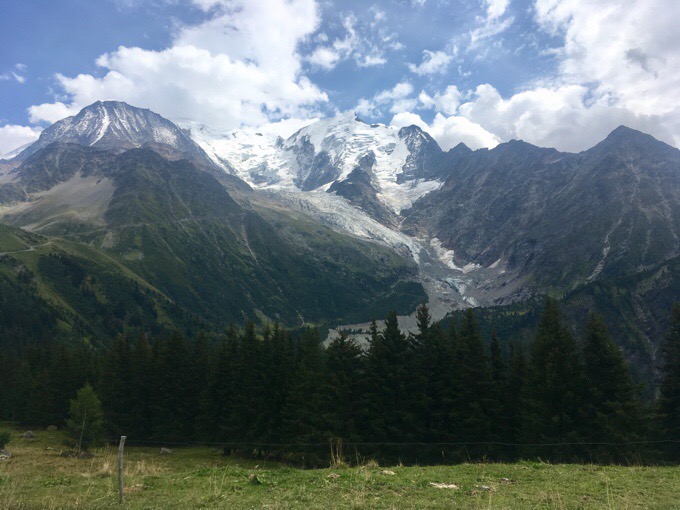 In the afternoon, I chose a high route option in the guidebook that adds 30mins and more climbing, but has more views and goes by the Bionnassay Glacier. It was cool to hear it cracking at times. 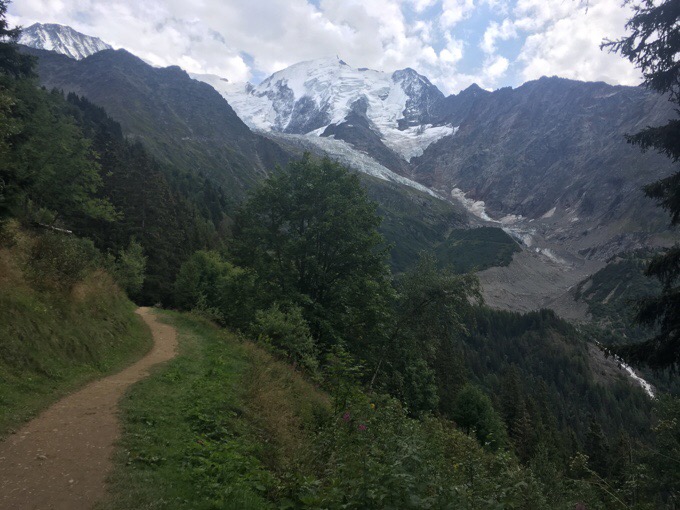 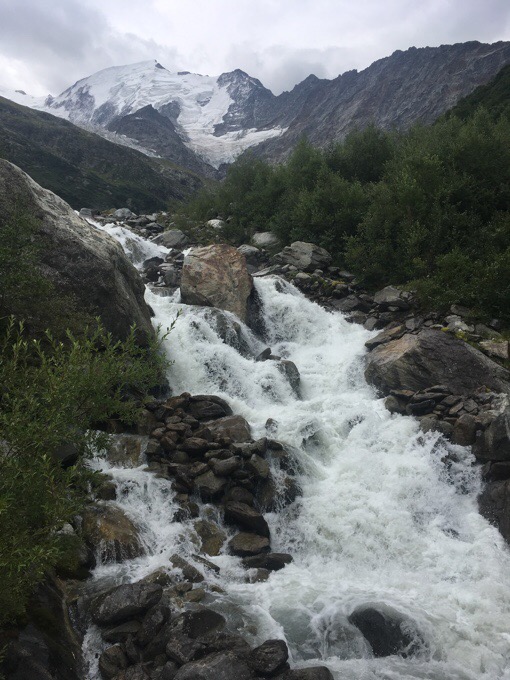 Clouds moved in to make it cooler and it almost rained, but stopped. There is some rain possible overnight tonight, and it’s drizzling as I write this, but nothing major. 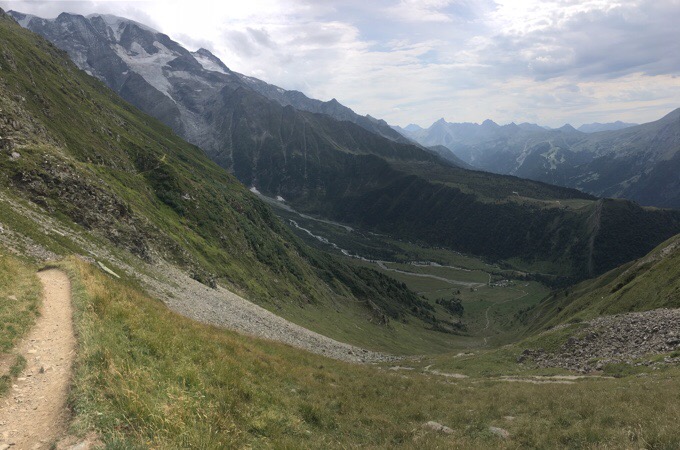 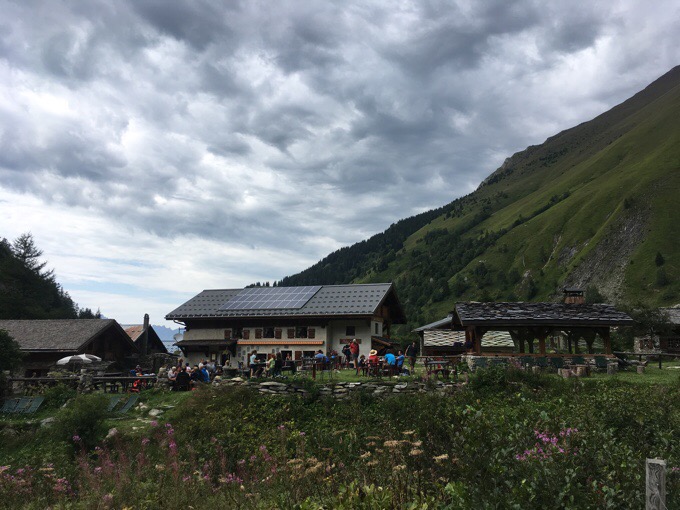 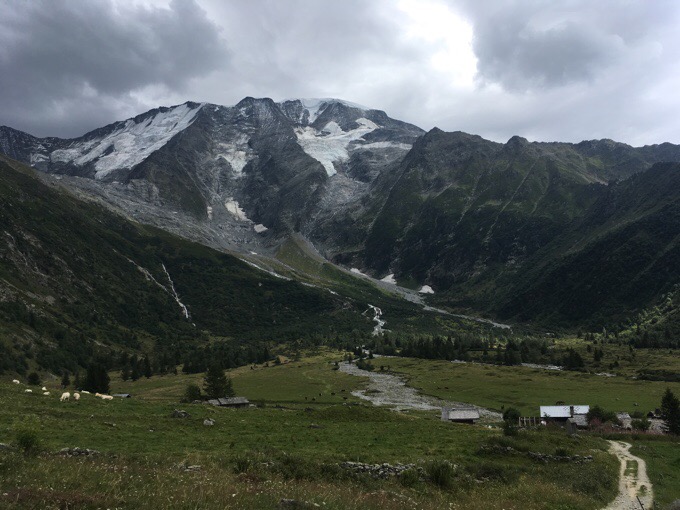 Great view from the refuge. 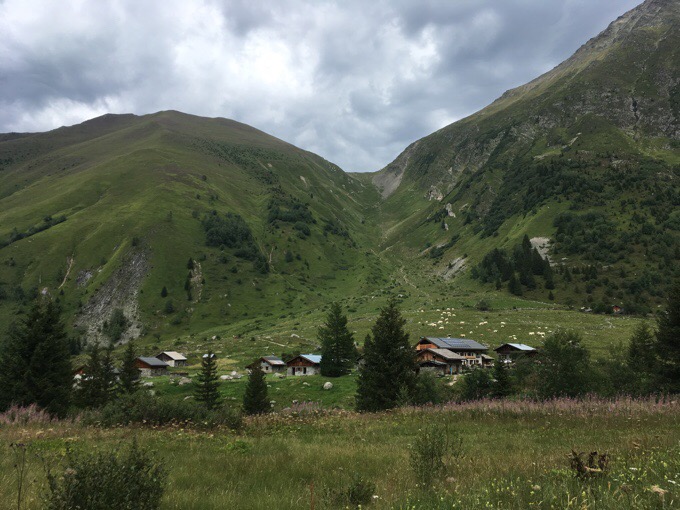 At 5pm, I came to a refuge at Chalets du Truc with lots of people there and just as many cows with bells in the immediate area. Wonderful views, but no way I’d want to tent in that setting. 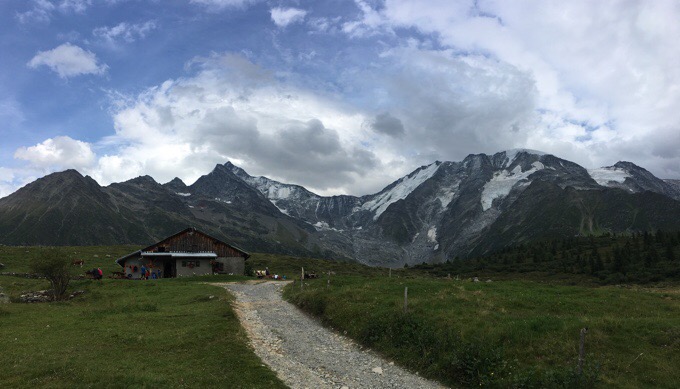 I was pretty tired, so I walked on to the wooded section just after the refuge. I saw a good spot, especially if it does rain tonight, and chose to take it knowing that the terrain gets a lot steeper from here and there may not be any good tenting options. I’m pretty excited to catch up on some sleep tonight and just hope no cows wander this way. There are plenty of cow bells chiming within hearing distance. 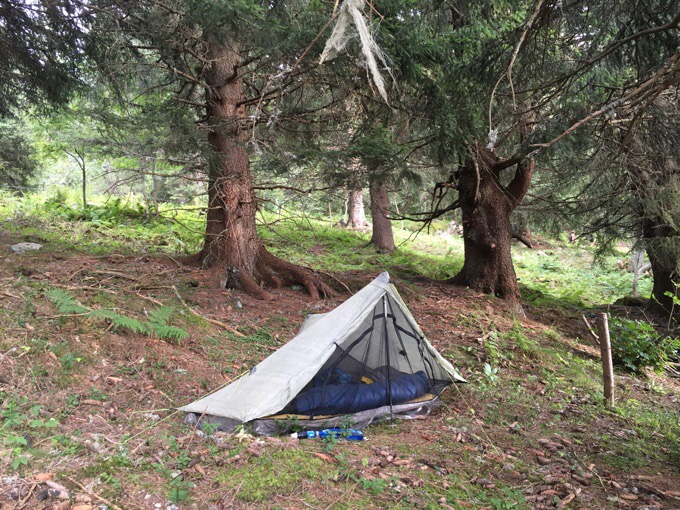 I’m going to sleep so well!

Oh, one thing I didn’t get a chance to share the last two days is that Why Not and Jim finished the HRP! Congrats to them! 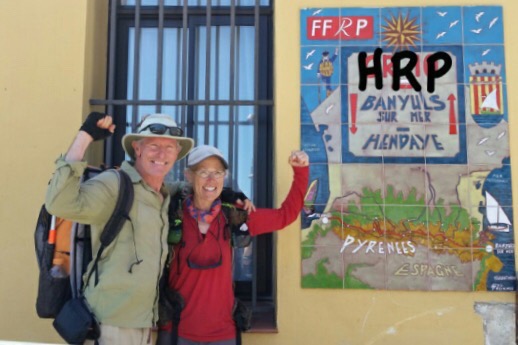 Cracks me up that Why Not edited the photo to say HRP instead of GR10, haha!

They will soon be starting the Alpine Pass Route in Switzerland, so check out Why Not’s blog for more on that and some fun photos of them reaching the Mediterranean Sea.