Day 8: Settling Into This Trail

It did rain some overnight. Probably a few hours total on and off with about an hour or so of fairly heavy rain. I was really happy with the spot I picked and was well protected. The tent was pretty much dry when I packed up. Today was slightly overcast and cooler. Perfect for hiking! I still didn’t sleep as much as I wanted due to the rain, but wasn’t as lethargic today, so that’s an improvement. I set off at 7:50am with about an hour on a gravel/dirt road most of the way down to the village of Les Contamines. It looked small at first, but had a packed central street with every service and store you’d want. 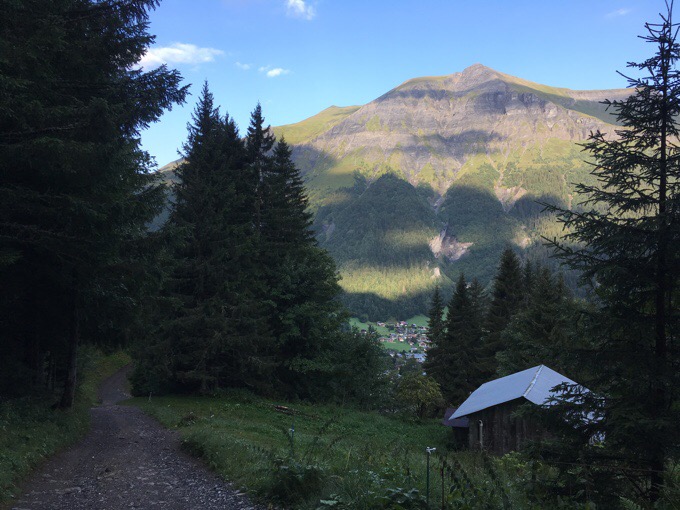 Morning decent. Les Contamines can be seen between the trees. 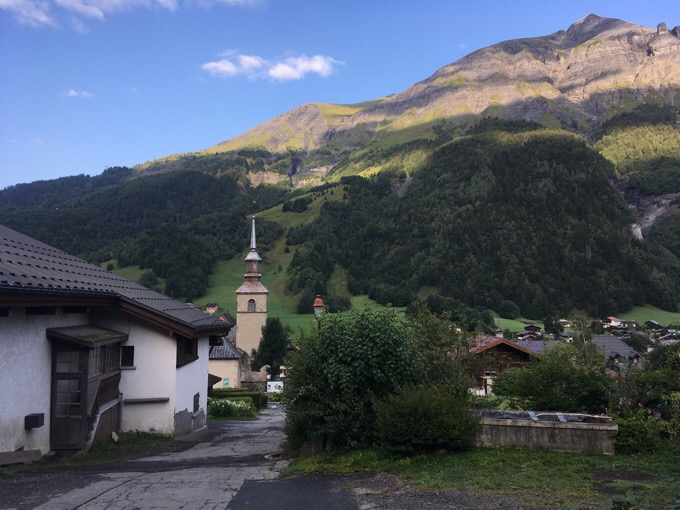 Every village has a church that stands out prominently.

For three days in a row, I have so many options for supermarkets that I’ve only needed to carry 24hrs of food, if even that. Yes, quite the luxury. I don’t like taking the time to shop each day, but it has been nice to carry such little weight in food. I’ll hit another store tomorrow and I think I’ll need to get more days of food for the upcoming section, but still not much. For those that don’t even want to carry a day of food, I pass so many restaurants and refuges in a day, that it would be easy to just buy a meal as you hike most days. Seriously, I didn’t think to count, but I think I passed at least 5 places to eat and or sleep today. 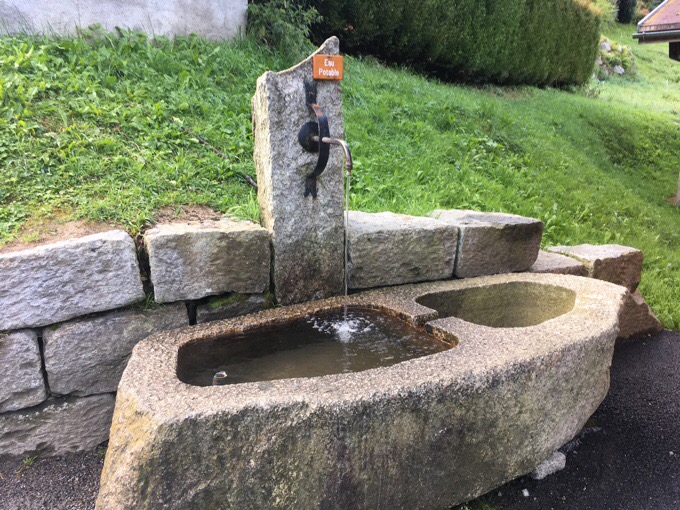 Oh the spoils of not having to filter water much with fountains everywhere.

As I mentioned yesterday, due to that ease of service, there are a ton of people out. From Les Contamines, I had half a day of a long gradual climb to Col du Bonhomme and the Refuge de la Croix du Bonhomme. In that time I passed probably over 200 people. Many were much older groups (some with a guide) headed up for a day hike. 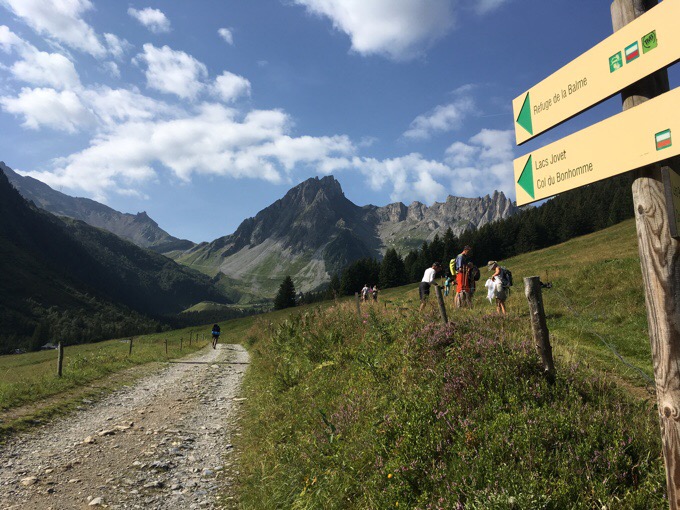 On the way up to Col du Bonhomme.

Fortunately, most of the hike up to the col was on a wide track, so there was little congestion. Also, most were so focused on the climb that I didn’t have to say bonjour or merci a zillion times like yesterday. When you say it so much, you definitely realize how much less energy a simple hi takes. 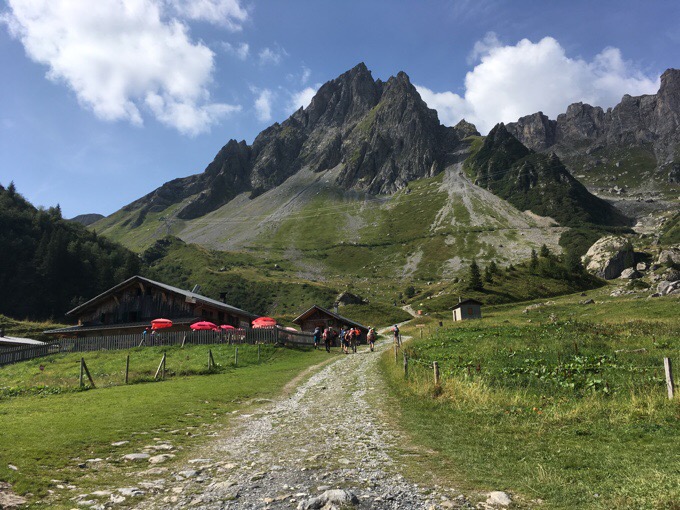 One of many refuges and restaurants.

The people aren’t bothering me as much as I thought they would. It’s only when it congests the trail and I break my rhythm that it bothers me, but it’s been either a wide enough track or spread out groups that it’s been ok. I am happy that I can find places to camp alone each night to decompress. 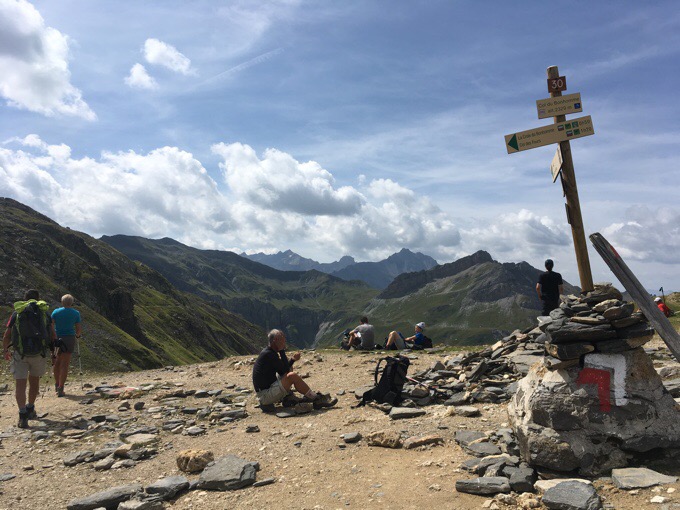 I ate lunch at Col du Bonhomme and found a spot off to the side. I rarely initiate a discussion, but sometimes there’s a brief exchange about something. I did meet an American woman going the opposite direction with a Gossamer Gear pack (like mine). She’s done many long trails and we had a mutual friend. Other than that, no real discussions today, which is good with me. 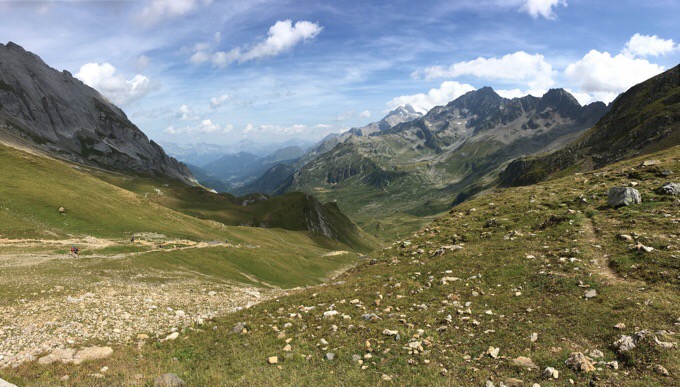 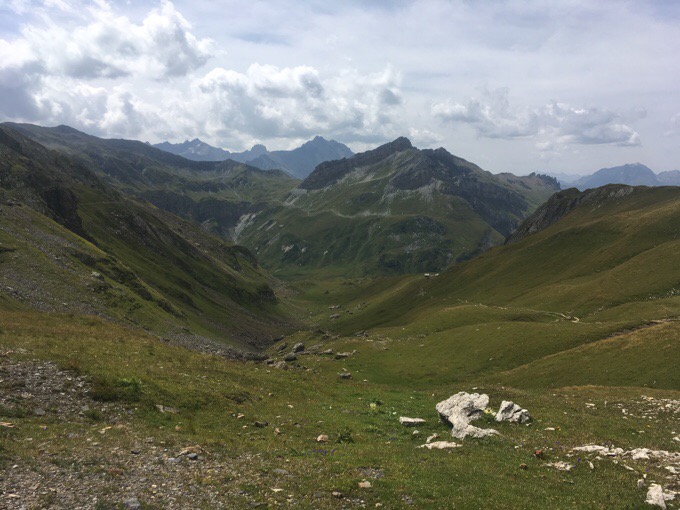 I’m finding the hiking out here to be far more relaxing than the Pyrenees. Although there is quite a bit of daily elevation loss/gain, it’s much more gradual and sometimes, very subtle. At times it feels similar to the PCT with the grade and wide open views.  I relaxed and listened to a lot of the Harry Potter and the Sacred Text podcast episodes. The scenery out here isn’t as amazing as in the Pyrenees, but still great. Very scenic and physically enjoyable. A good balance. 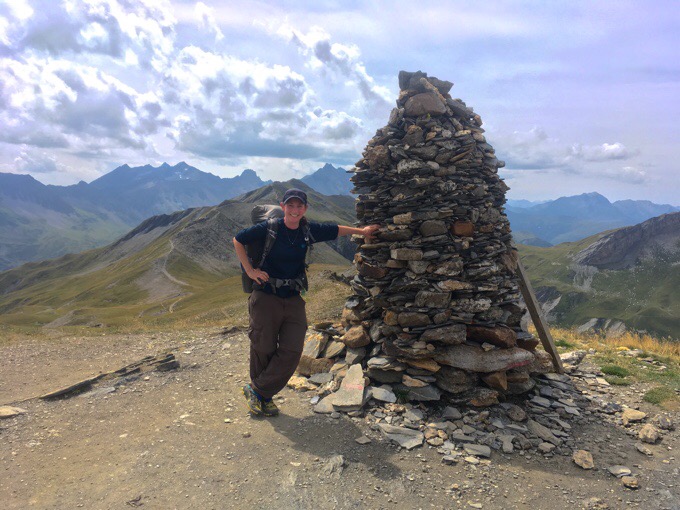 I do find that I’m settling into the GR5. It was an odd start with the weather and early zero. Then the two day side trip to Chamonix. Now I’m getting in a rhythm that feels good. Somehow, even with the zero and two day side trip, I’m still just ahead of the itinerary in the guidebook most stick to. I’ll take it! The best part of the day was an extended ridge walk on the Crête des Gites. 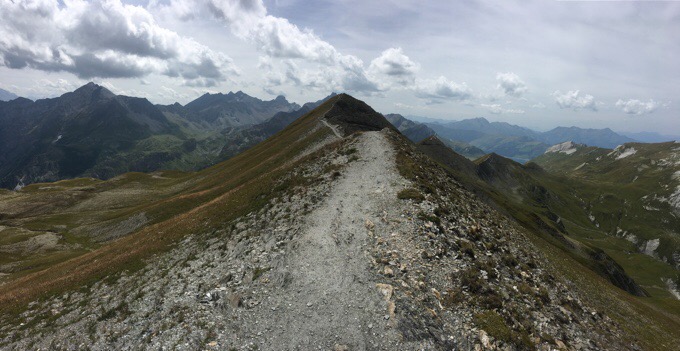 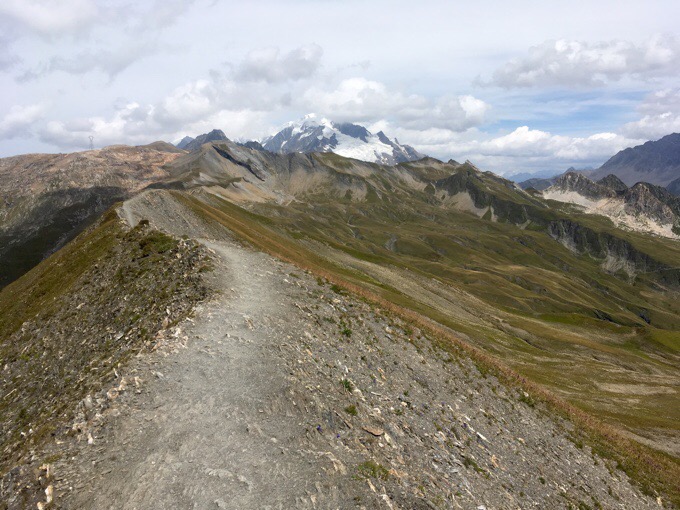 Looking back towards Mont Blanc. 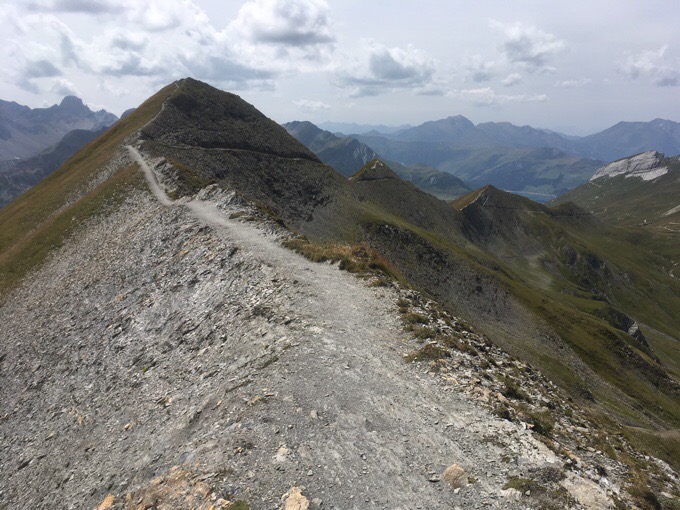 From there, it was down to a parking lot with a ton of cars and people. This must be quite a popular area. 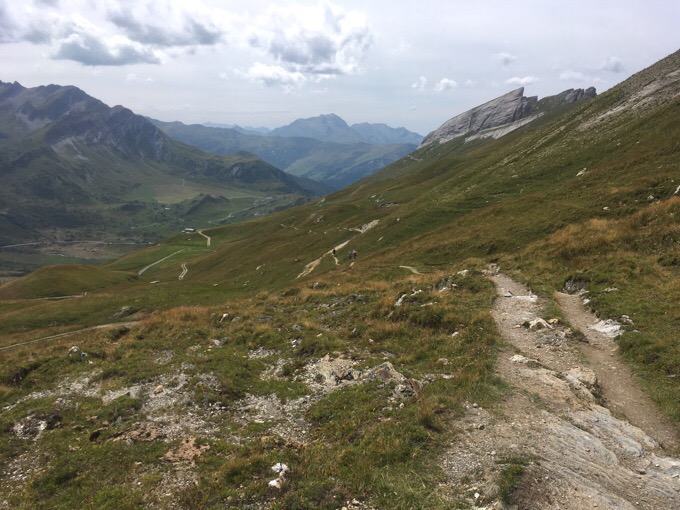 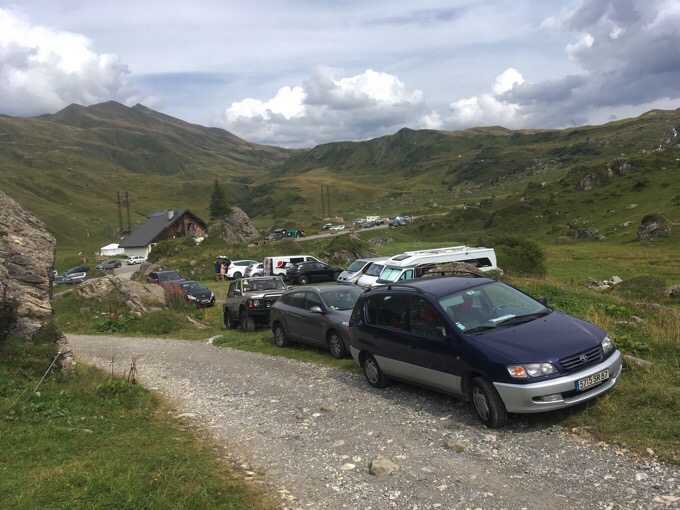 Multiple packed parking lots and cars along the track.

The final couple hours of the day was a relaxed climb up one valley and through another. For the first time since I can remember, I was just cruising and not immediately working towards a specific col or major low point. Well, apparently, there were minor ones, but nothing that felt like major tasks. 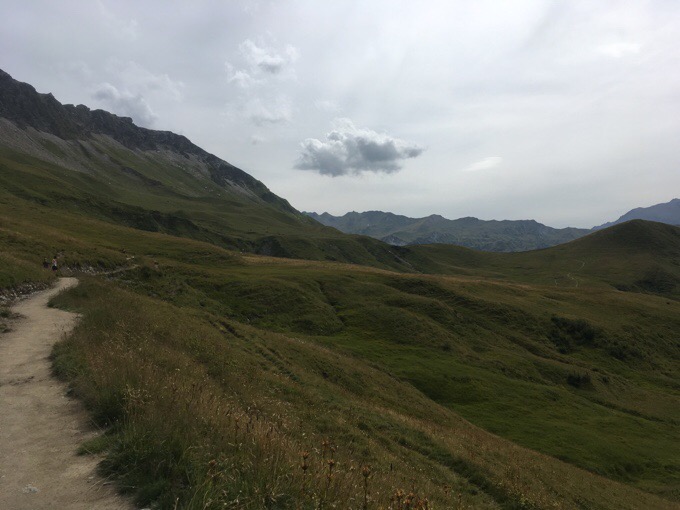 My goal was to find a spot in the final valley sometime after 5pm, but when I rounded the corner and saw the view, I was immediately drawn to the far side and decided I wanted to hike further. 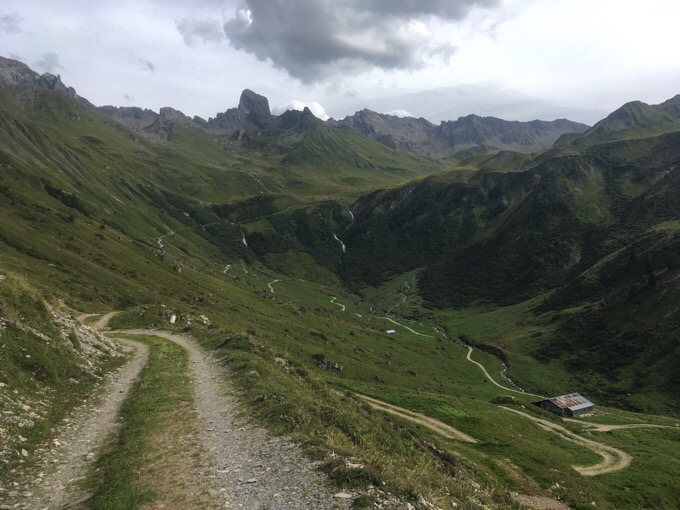 I want to go to there.

It took longer than expected to find a spot I was happy with. I kept passing possible spots in hopes of better ones, but all were a bit less than ideal with lumpy grass and rock terrain. At 6pm, I found a spot that would do that wasn’t too slanted and found a way to make it work. I figured it wasn’t going to get any better than that. The view is great and the air is so still that I wouldn’t know I was outside if it wasn’t for the distant cow bells down in the valley. 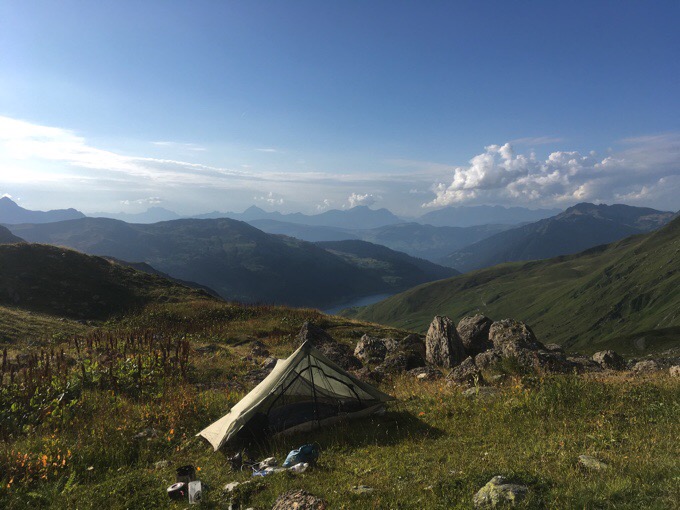 Clouds have gathered some, and it is supposed to be cloudy the next couple days, but no rain is forecasted, so I hope that’s right. I’m also quite happy that I’ve also had service in my tent many nights to be able to post the blog. That’s so much better than having to stop during the day for 30mins or more to get it posted. Now tonight I hope to finally get caught up on my sleep! 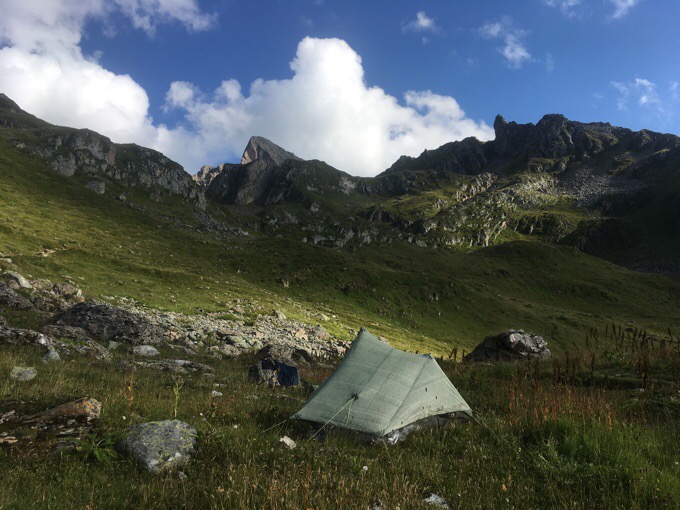 Tomorrow morning, I’ll hike up there to the Col du Bresson.