Day 9: In The Mood To Mosey

I woke up about an hour earlier than necessary, but had some studying to do anyway for the upcoming section. I didn’t want to look at it all last night on a tired mind, so I saved it for this morning. The next few days have a few options, but the most popular one seems to be the high route option that goes through Parc National de la Vanoise. I’ll talk more about it tomorrow, but it required reading ahead a bit to get a grasp of it all. As for today, I just needed to stop at one of three or four options to get food for lunch and dinner today. That seemed simple…I started hiking at 7:45am to finish off the last 30mins of hiking up and over Col du Bresson. It was a great start to the day with impressive scenery. 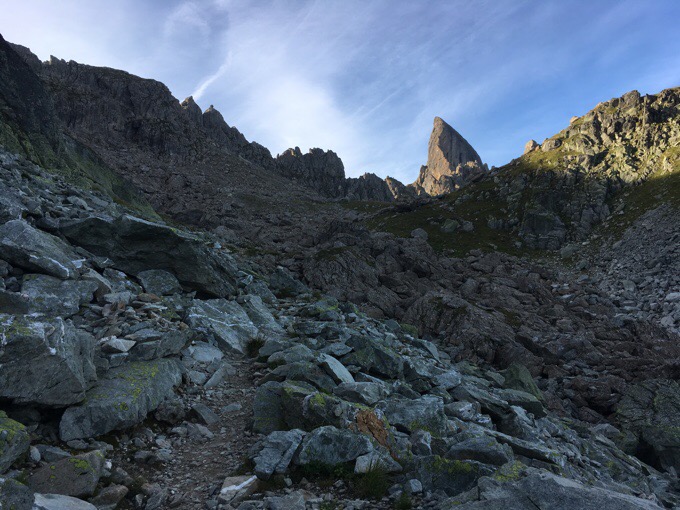 Heading up to Col du Bresson.

Once up the col, there was a group of four up there that had just come up from the other side. A helicopter flew overhead that had dropped supplies off at a nearby refuge. It soon returned while we were talking, and the pilot actually showed off for us flying fast and low over us and tilting sideways. The group hiked on and I waited for the helicopter to return again. It was fun as he even paused this time as he came over seeing that I was videoing. I think I won major points with my nephews on this one!

Next up was a full morning of downhill all the way to the village of Landry, 5551ft/1692m down from Col du Bresson over 12mi/19km. The valley below the col was great as it wound around to Refuge de la Balme. 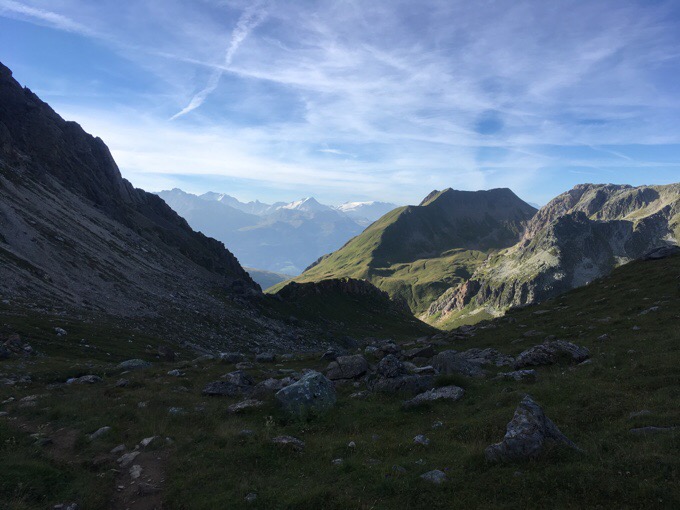 The Refuge de la Balme is personally my favorite one so far. I’m purely judging on aesthetics as it looked really quaint and was in a great valley with a nice gradual track leading up to it from the valley below. I loved the relaxed cruise down. 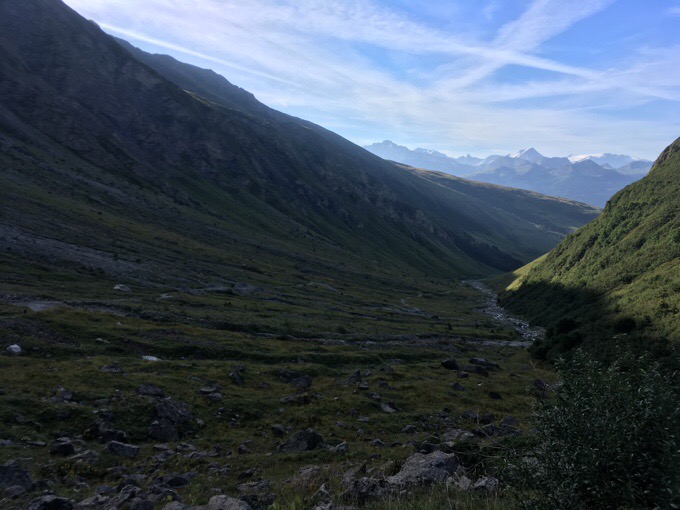 There is a track/road winding down. 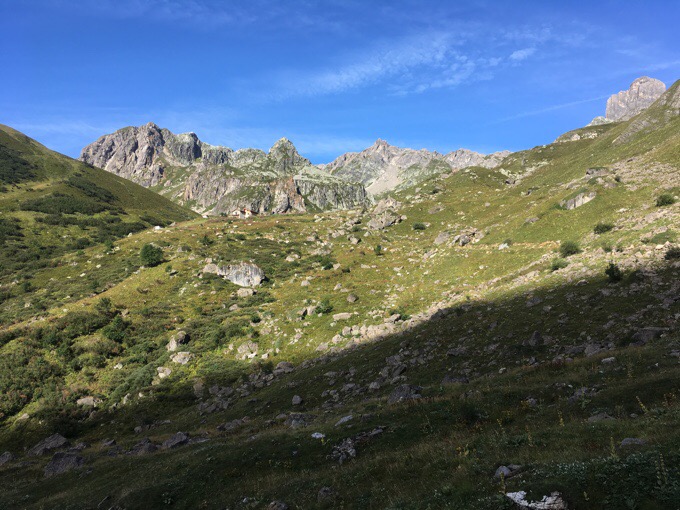 Hard to capture, but the Refuge de la Balme is up on the left surrounded by great views.

My body was in a mosey kind of mood. It didn’t feel super springy, but also wasn’t lethargic. It just wasn’t wanting to exert much energy, so that made the downhill morning a very welcomed task. After the wide track, there was some nice trail that then alternated from road to trail the rest of the way. 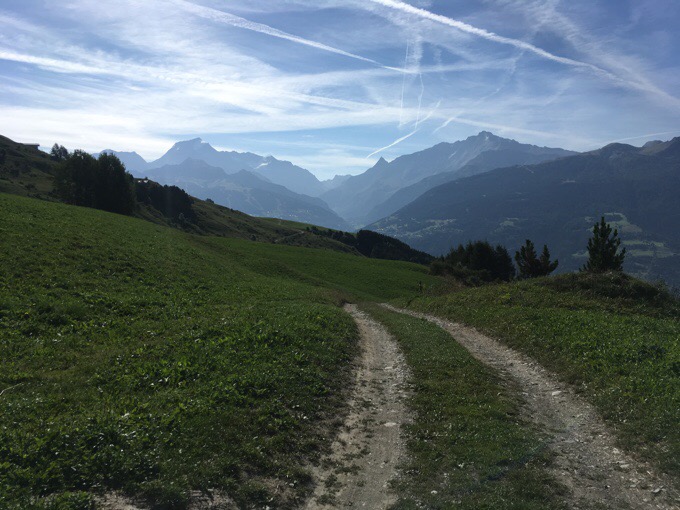 On the way down to the village of Bellentre, I passed through a bit of Valezan. All these villages are so cute and feel like I’ve been transported back in time. It just doesn’t get old to walk through the narrow winding passages between the old stone buildings. There’s always a church standing out over the village and an abundance of fountains to get water. I like how the red and white markings are placed in various places to guide the way. 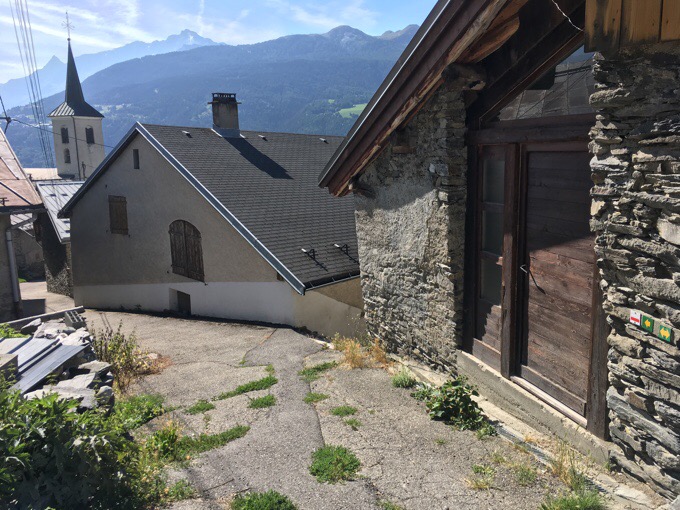 Notice the village church and the route signage on the building on the right as I weave through.

There were no services in Valezan, but the guidebook mentioned a shop in the next village of Bellentre. Laura and Gian mentioned it was closed for them the year they went through, and that was unfortunately the case for me. I think it is open at some point, but I have no idea if it’s even something that would have food for hiking.

I had to hike another hour to Landry. Long story short is that my guidebook had this as the alternate route that takes an hour longer, so I was bummed about that. I had today timed to end around 5pm, but now I had an extra hour. Turns out, it’s now the main route anyway. It was an easy stroll on a paved bike path along a stream to Landry, which also has no shop to buy food, ugh. 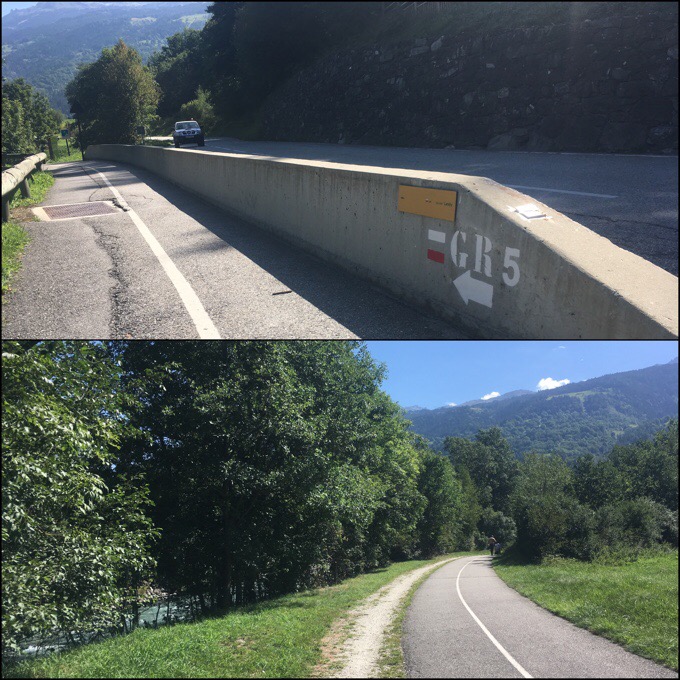 I should have just carried more from the store yesterday when I bought food. I don’t like unknowns when it comes to resupply. Food is important. I had an option of two other places I could go to off trail, but my body was really not in the mood for extra walking. Thankfully, I tend to over carry food anyway, so I had enough to get me through to lunch tomorrow if I ate at one of the two restaurants in Landry. I chose the one by the bike path and had a chocolate ice cream bar and an omelette with fries…and a ton of water. It had gotten quite hot as I dove into the valley. While sitting there, two of the french men (Pierre-André and Nicolas) I’ve been seeing every day or two since we stayed at the same gite the first night arrived. They were with Patrick from Holland. It’s been fun to have a bit of a community feel and see familiar faces. 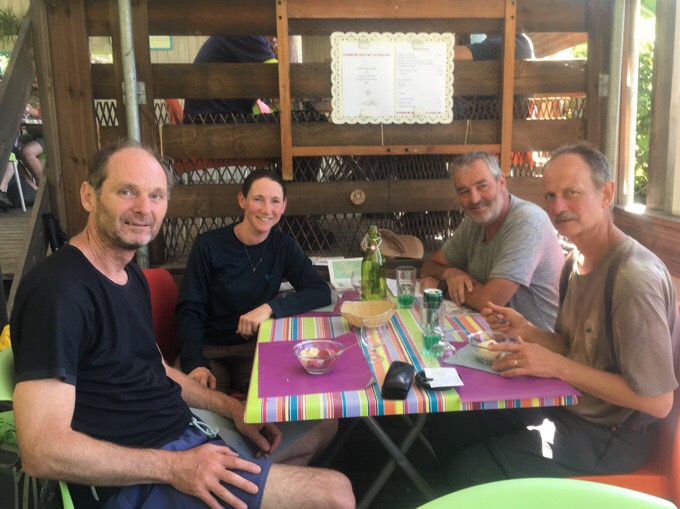 Lunch with Nicolas, Pierre-André, and Patrick.

I probably won’t see them again as they are following the book schedule, and I’m going ahead of the book, but have been overlapping them with my almost three days taken off trail. They were stopping for the day and had a hotel booked. I did envy them a bit as I wasn’t looking forward to the climb out of Landry on a stomach full of eggs and fries. In France that’s one of the few options for lunch. You should have seen the look I got from the waitress when I asked if they had sandwiches or burgers.

I said bye to the guys and headed out just after 1pm. It was 85F/29.4C and I dripped sweat as I climbed on road, wide track, and trail out of of Landry. I felt like I was dragging. I went through three more small villages (plenty of filtered water!) along the way, and the valley opened up to reveal the beauty of what was to come in the Parc National de la Vanoise. 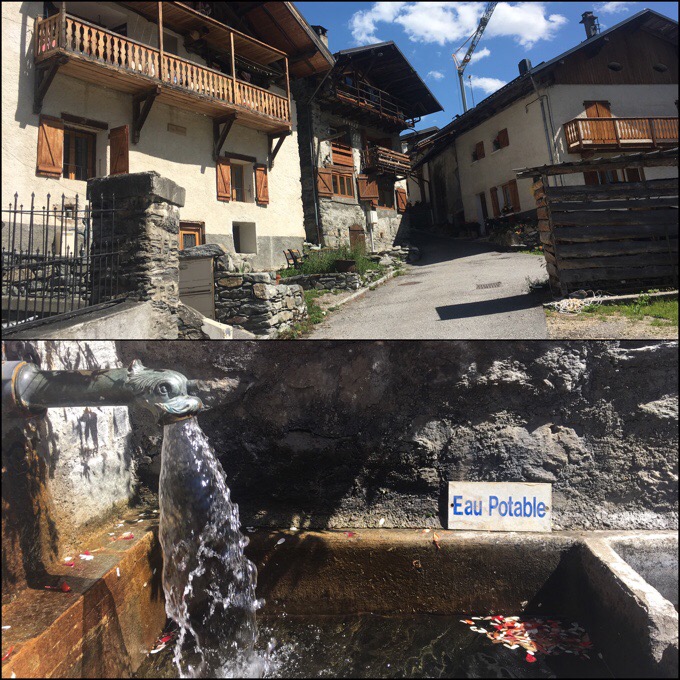 LOVE the water in the villages. Someone could make a photo book just on the fountains along the GR5. 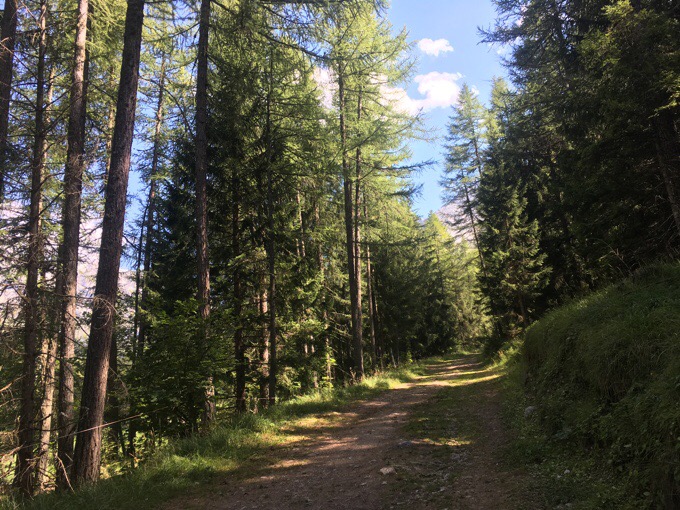 It was hot, but thankfully mostly shaded.

I had renewed energy and had a decision to make. There’s understandably no camping in the national park, so I needed to stop before the entrance at 4:15pm, or commit to what the signs say was another 2hr 45min climb. I saw that view and went for the climb of course! 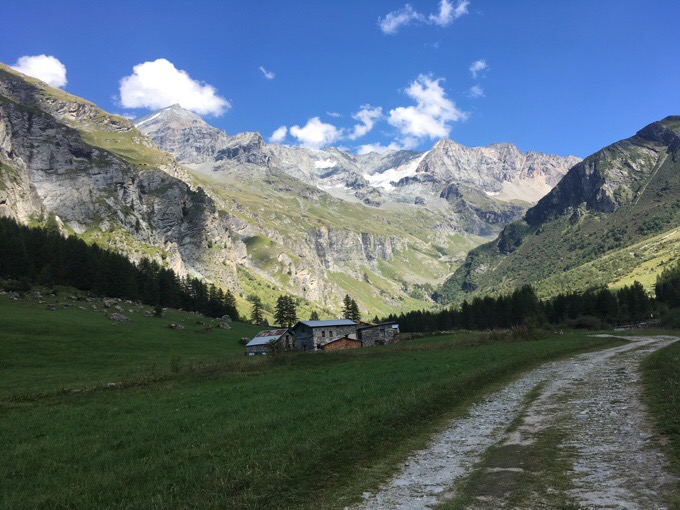 However, my body was strongly rejecting this choice. Everything felt like lead. Then it hit me what was happening. I’d been trying to rest the last couple nights in preparation for this. Yep, my period. In case anyone is counting, and thinks this just happened, you’re not crazy. Yep, 21 days from start to start. It was 22 days last time. 23 is average. I get to deal with this four times in my three months out here. I swear I’m the most fertile person ever. I know so many who say their cycles spread out or stop completely when they hike. Nope, mine just gets closer together. Yep, probably too much for many of you to hear, but it is an annoying thing women have to deal with and it sucks to have something knock me down a peg regularly every three weeks for a few days. I think this is my balance in life for rarely getting actually sick. 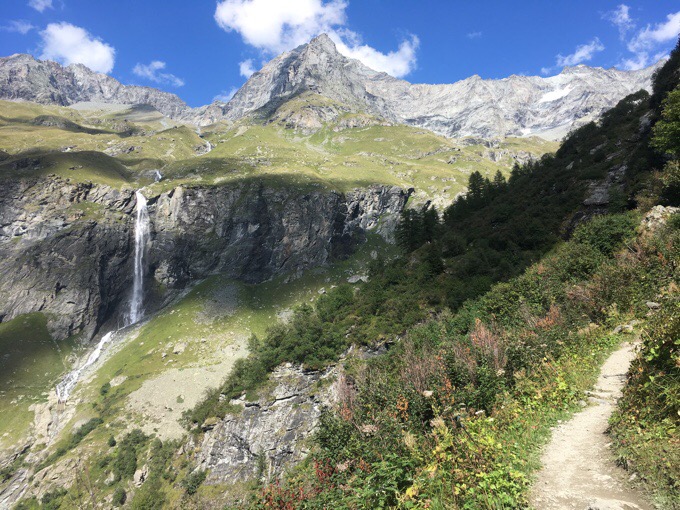 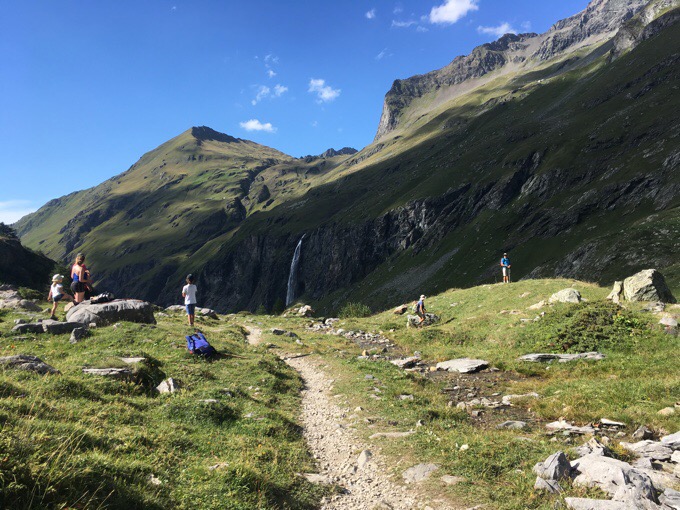 I continued on with my body throwing a tantrum, but it was totally worth it. As I got through the brunt of the climb, I hit the valley of the refuge I hoped to camp at. I was taken by the scenery so much that I failed to notice I unintentionally was walking on the wrong side of a stream that was actually the slightly more direct option given in the guide. I figured this out when I asked the people hiking behind me if they too were headed to the refuge. 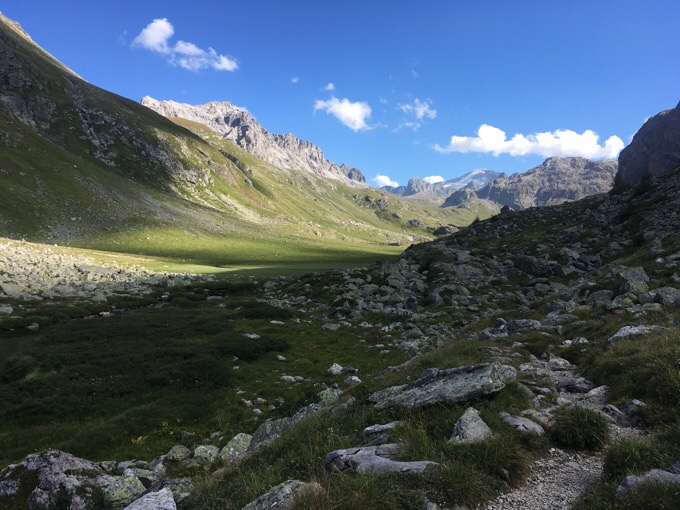 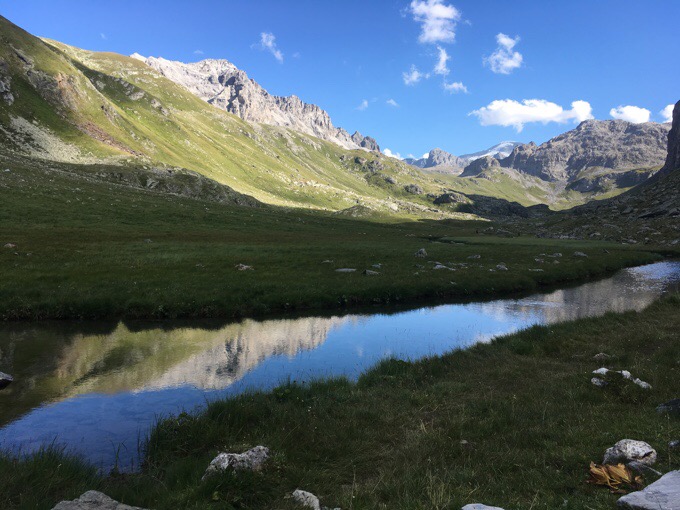 Turns out, they were going to tent and knew that we were on the side of the stream outside the border of the national park, so I didn’t even have to go all the way to the refuge to camp. They were climbers and going a bit further to be positioned for their climb tomorrow. Turns out the woman was a full time major climber, and has a blog and is sponsored enough to climb for a living. Her name is Nina and her blog is www.ninacaprez.ch. Pretty epic images and videos. 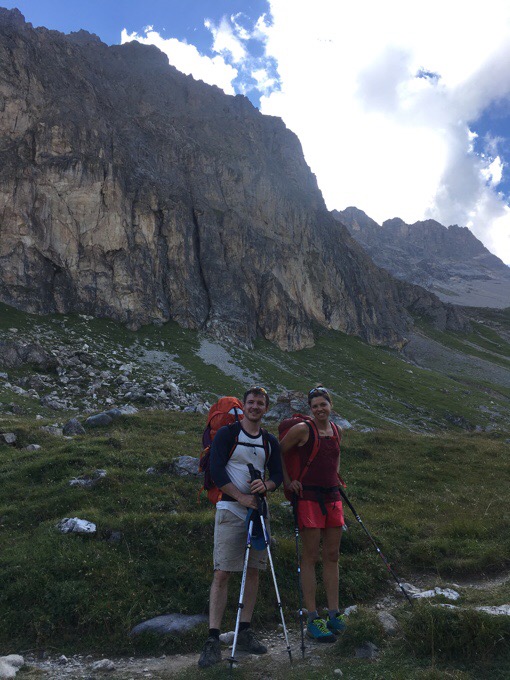 Nina and her climbing partner (didn’t get his name) in front of the wall they will climb on the other side tomorrow.

Once I reached the Lac de la Plagne at 6pm, I found a spot and it was grand. Others are rented below right by the lake. This is the best tent spot on the GR5 thus far. Though there are still plenty of cow bells ringing in the valley of course. I couldn’t decide which photo of camp to post, so you get all four angles. 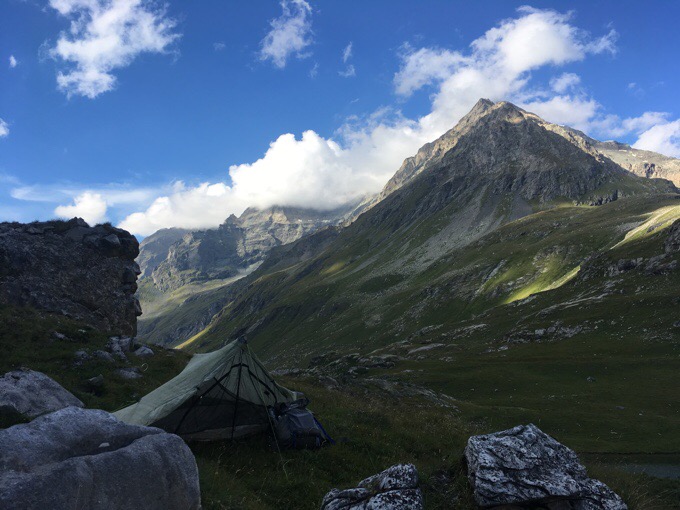 Just before dark, the light wind stopped, and the mountains were reflecting in the water, but I was too drained to get up again. Hopefully, it will happen again in the morning. 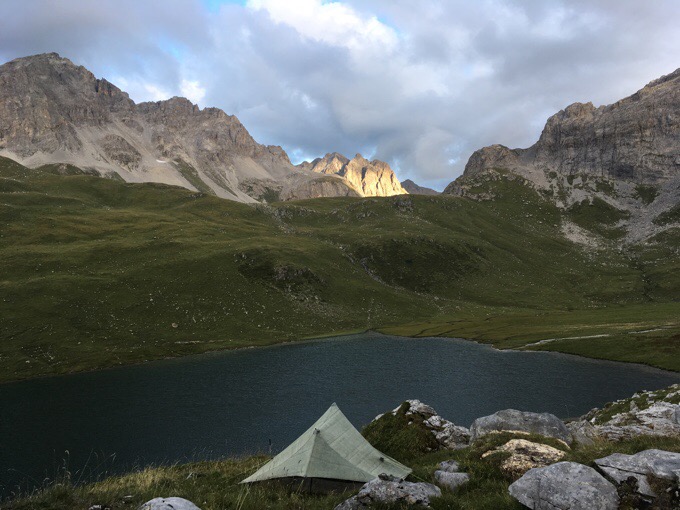 It’s 9:30pm, and I’m ready to sleep hard hopefully. The air is the the nightly mountain cold air that numbs my fingers if I don’t type in my sleeping bag, but I’m already sweating through my pajamas as I tend to do the first night of my period. Should make for an interesting sleep. Still, totally worth every step! 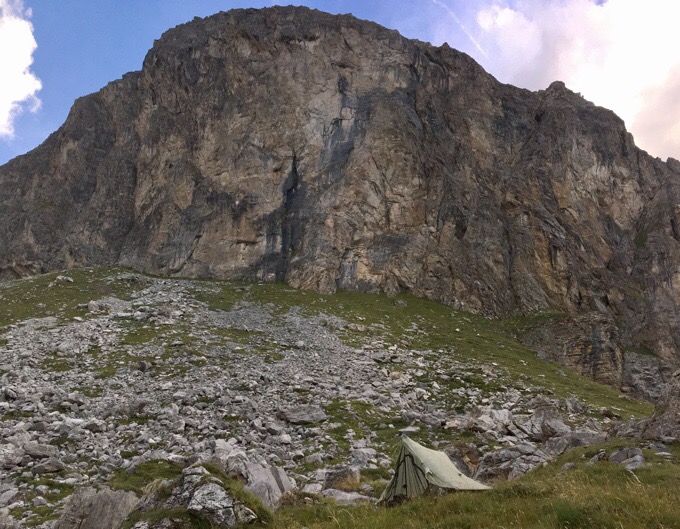 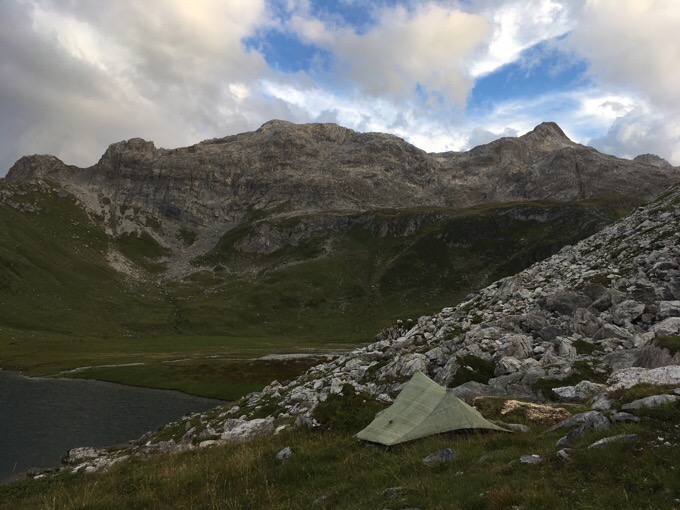