Transitioning To The GR5

I had a two day transition from the Haute Route Pyrenees to the GR5 in the French Alps. Before I left Banyuls-sur-Mer, I went to the post office and was reunited with my pot! Those of you following know I accidentally left it a shelter a couple weeks ago. Why Not and Jim got there five days later and the pot was still there! They sent it, along with my mini Gossamer Gear chapstick I’d dropped another spot on the trail that they found, ha! They aren’t 100% in all that I’ve dropped, but pretty darn close. Why Not found and lost my pee rag early on (she claims not on purpose), and they missed the other chapstick I dropped, ha).  My theory of keeping my friends behind me to sweep up after me is definitely working on the HRP. 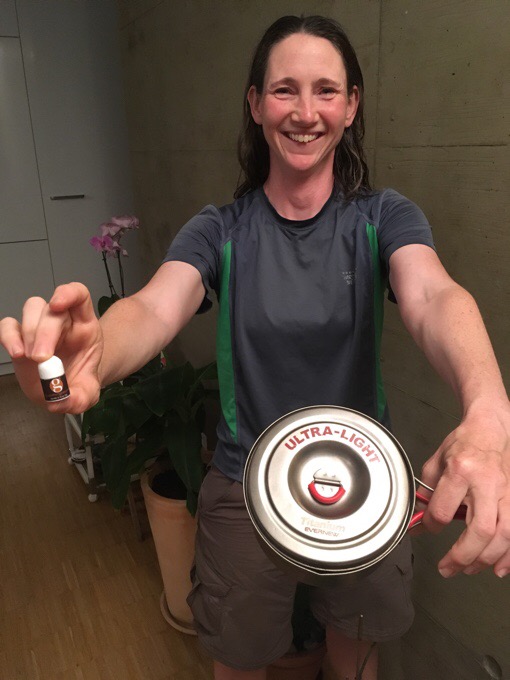 The first day of this transition was spent on the train for a full day. Well, technically, it was three trains, and unexpected bus for a technical train delay issue, and then a later than expected Uber ride to my host near Geneva. For much of the ride, I got to go on the speedy TGV that everyone hears about. I Skyped with my nephews while on the train and they may have been more in awe of this than anything I’ve done. It was nice, quiet, and such a smooth ride! I got to watch more of Breaking Bad and started the new Netflix series Ozark that’s pretty good. 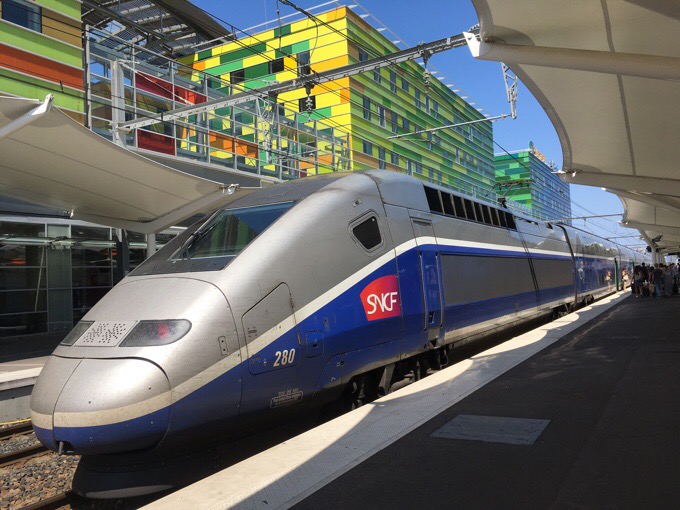 Here’s an overview photo to fully see where I went from Banyuls-sur-Mer to Geneva. 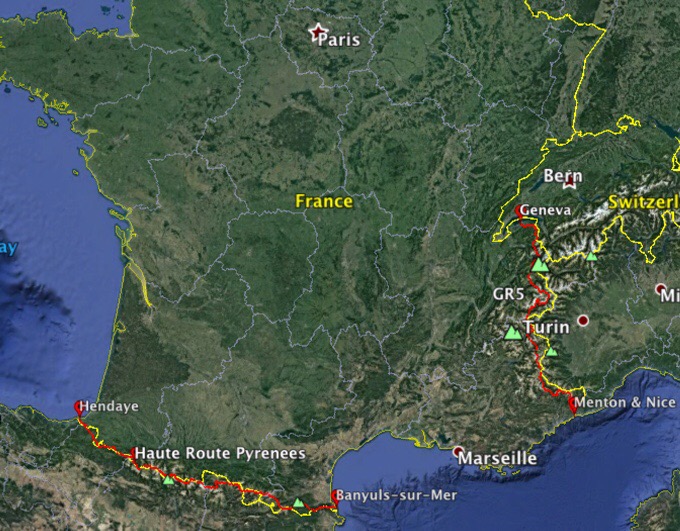 I arrived as there was a festival and fireworks over Lake Geneva. It was quite the welcome. I will fly out of Geneva at the end of September and plan to spend some daylight hours in the city then. 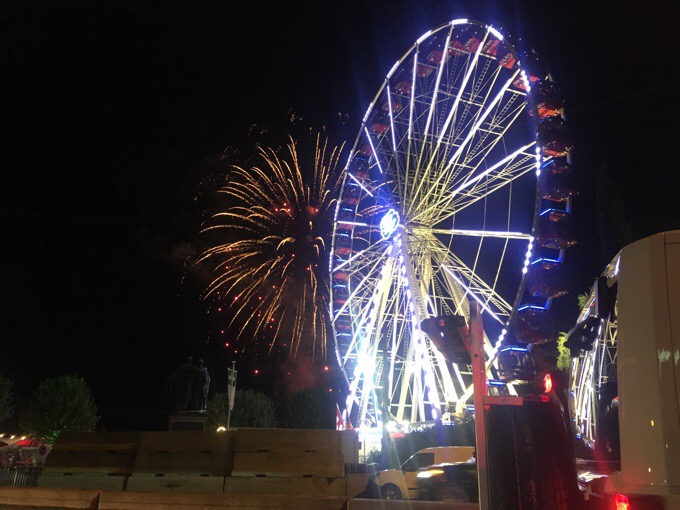 Those that remember Angelynn (who I met on the Te Araroa, and hosted me wonderfully in Paris), her friend Marlyne lives on the outskirts of Geneva, Switzerland and kindly hosted me for two nights. She lives here with her husband and two boys. It was really so kind of her to host me, and I hopefully contributed some assistance while her husband is out of town. Here’s a photo I could only get the boys to take after telling them they could dress up as ninjas. Cracks me up. THANK YOU MARLYNE!!! 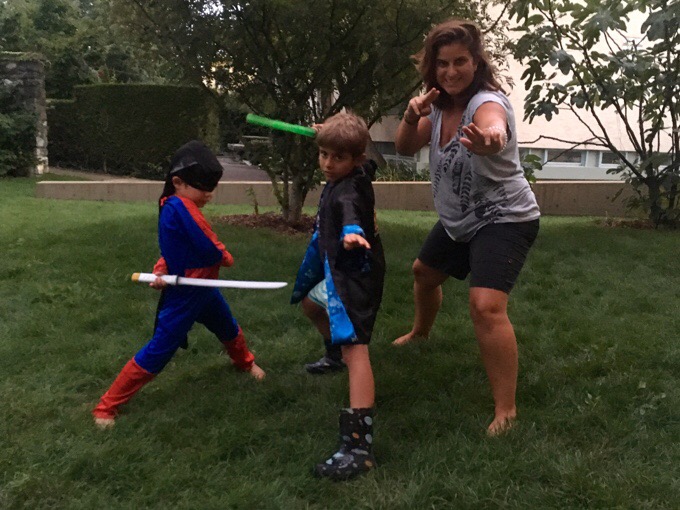 My second day of transition was especially well timed because it stormed for much of the day. I love it when it really pours on my zero days and I am warm and dry on a couch with a ton of food. Just like the Pyrenees, weather can be strong in the French Alps, but looks like this first week should work in my favor with some pretty nice weather. I got to see a preview of the hike as my train paralleled the French Alps. I think I’m really going to like this one. It reminds me of the mountains along the Great Divide Trail in Canada and I’m loving the clouds! Here’s a photo from the train. 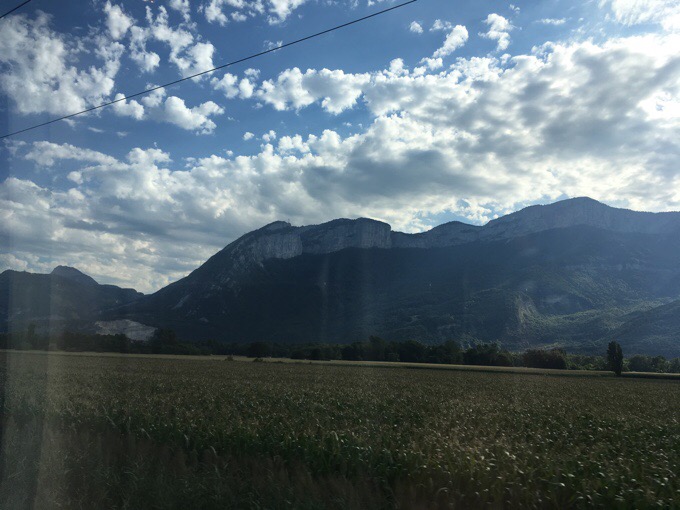 I slept in amazingly until 9am with the rainy weather and darkness. I did some organizing and oriented
myself with the guidebook and route. I have hardly studied the GR5 at all, but it will be much more touristy in the beginning and go through some amazing stuff. I still hope to be able to find much camping on my own, but it does try to end at a town or refuge each night similar to the Pyrenees, but even more so. I’m about five days from Chamonix and then will take two days (with some fun cameo guests from the past!) to do some of the epic sightseeing around Chamonix. I’m just feeling like this one will be a lot of fun. Still a lot of work, but less relentless than the Pyrenees and there are many blasts from the past with possible hiker reunions in the making if schedules work out… 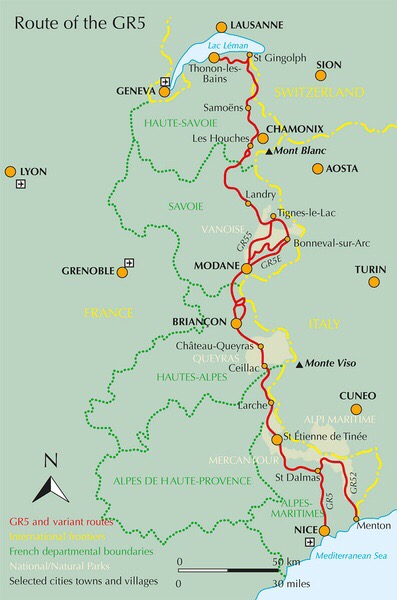 There is a high route similar to how the HRP was that avoids dropping down to villages so much and tries to stay high. Unfortunately, the guide for it is fairly new and only in French. I have the gpx track and advice on where to possibly stay high. I’ll see how it goes, but I think that no matter what, I’ll be happy with what I do. There are two main popular alts I’ll do in the middle and end, but other than that, I’ve yet to decide. As you can see, this route is in Switzerland for a brief bit before staying in France the rest of the way to the Mediterranean. The GR5 does run further north the full length of the France border, but this section south of Geneva is what everyone does and commonly is referring to when speaking of the GR5.

It all kicks off tomorrow and should take about a month. I plan to do the more direct and steeper St Gingolph start (a two hour train ride from Geneva) that’s recommended for people that don’t find it necessary to ease into the elevation. I think my legs are adjusted to elevation quite well after the HRP. My phone plan doesn’t work in Switzerland, so there may be a gap before I get posts up. Here we go!