Day 2: Adjusting To A New Trail

I slept well last night and got going at 7:50am this morning. I was aiming to make it to the village of Champex before noon. I hadn’t looked up when stores closed there, but many things in small villages close for the afternoon. It drives me nuts, but I’ve managed to make it to villages within the open hours most of the summer. The morning started off with a descent down a valley to Chalet Du Glacier, and then a climb up and over Fenêtre d’Arpette. 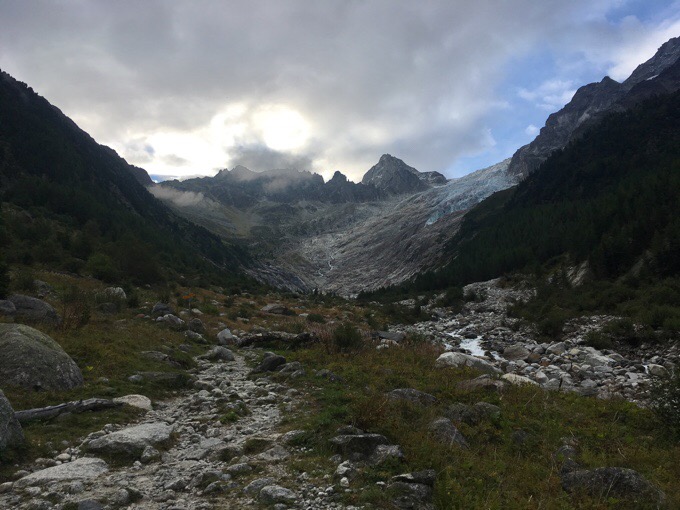 Starting the climb to Fenêtre d’Arpette.

With each one of these trails, I need a couple days to adjust to how each guidebook is written. I’m terrible with reading and this guidebook (the Cicerone Press one) is overwhelmingly wordy for me. I’m one of those people who skips detailed instructions when it feels overwhelming and skims for main points. That was a bad idea today. I saw the distance, and failed to notice the suggested timing or elevation. Due to the elevation and terrain, the climb up and over Fenêtre d’Arpette was over an hour longer than expected. Had I read closer, I would have known that it was a 3550ft/1082m climb over just 2.8mi/4.5km. I hadn’t done a climb that steep for that long in awhile and my body felt it. The view was awesome though! 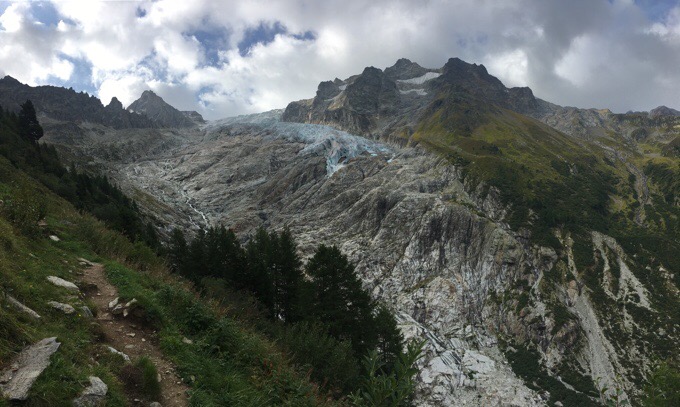 I think the glacier on the upper right is part of the Trient Glacier. The book is so wordy that I can’t tell if they even say the name of it. They do point out how it’s sadly shrinking. The climb took about 2hrs and there was a great view of the glacier the whole time. I took a ton of pictures as it looked so much cooler as I got closer. I’ve already found that my phone’s camera doesn’t have the wide angle lens to capture the grandness of so many of the views out here. I’m going to try posting some that are taken in panoramic mode (like the photo above) to capture more, but I’m not sure how well they upload to the blog posts. Are they ok in size/appearance? The quality is a bit lower, but captures a wider view. Photos can be clicked on individually to see them larger as well. 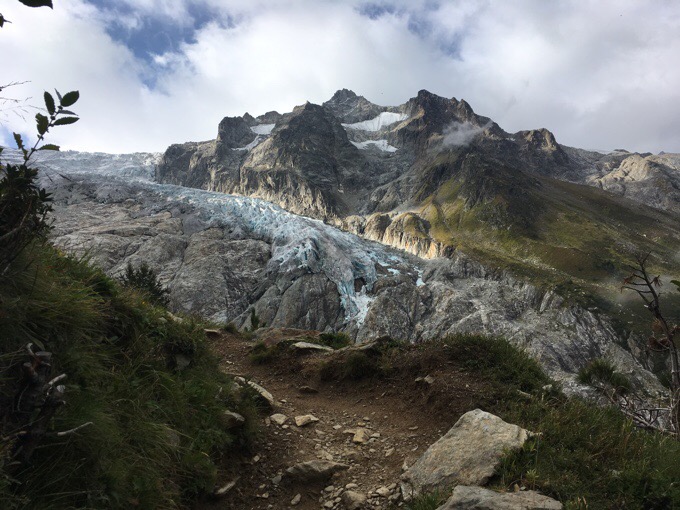 The view looking back down valley was also pretty great. Some fog rolled in and out, but thankfully never fully caught up to block the view I had looking ahead. At one point, I glanced back a few minutes after taking a photo of the valley and saw nothing but a wall of fog right behind me. It came so quickly and was a total whiteout behind me for half an hour before moving on. I feel like in Switzerland, and especially during the shoulder season, anything can happen at anytime regardless of what the weather forecast is, and that’s an intimidating thing. 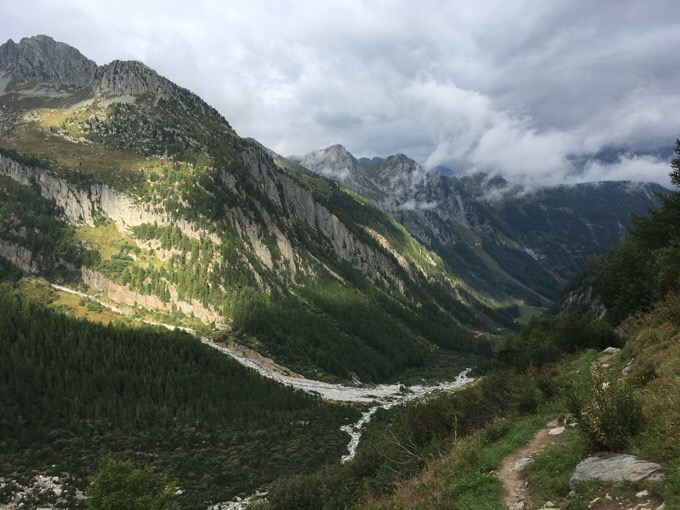 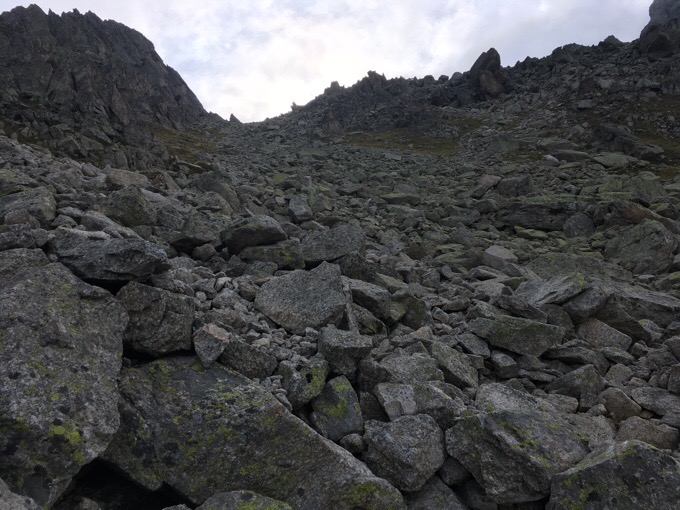 Once up top, I was met on the other side with another wall of fog. It was crazy that I’d look one way and have a clear view of a valley, and then the other was a total whiteout. It was a really rocky descent for the first 40mins or so. 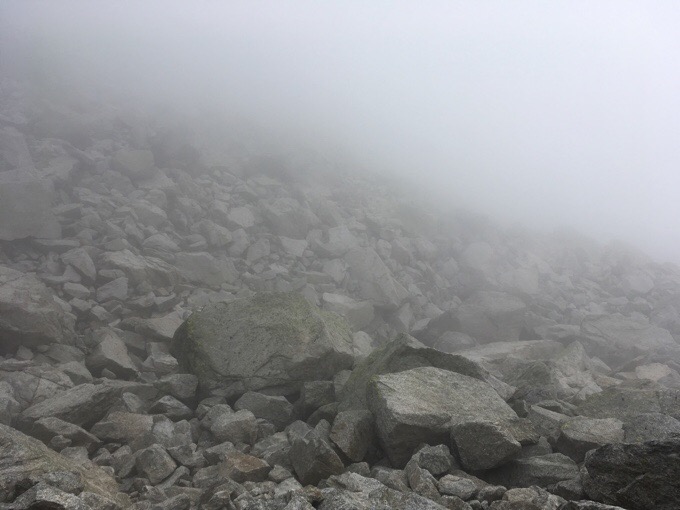 I also hit the wave of Tour Du Mont Blanc (TMB) hikers heading the opposite direction as me. It was a good 50 people. They must have all left the same refuge about the same time. The TMB has the most Americans on it I’ve seen all summer. The TMB was not on my list of hikes to do as it seems overly hyped, commercialized, and packed with people to the point that I’d be stressed. I knew there were a lot of people doing it, but this is late in the season, and I still saw tons of hikers today until the paths diverged after Champex. 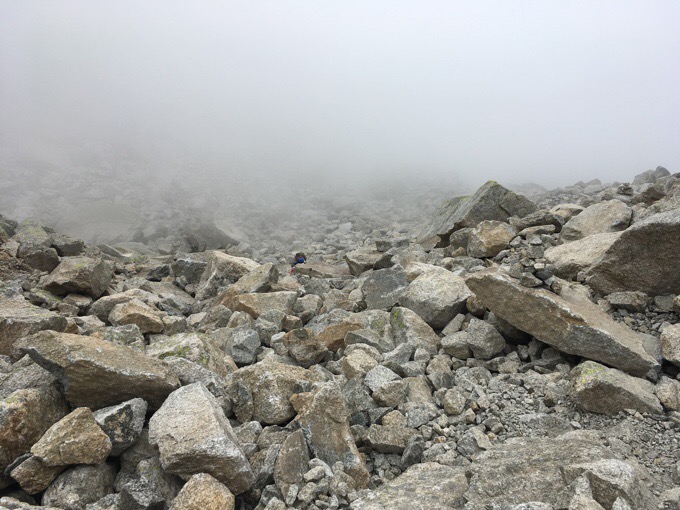 Some hikers coming my way.

Once off the rocks and lower in the Arpette valley, the fog cleared enough to see the view, yay! 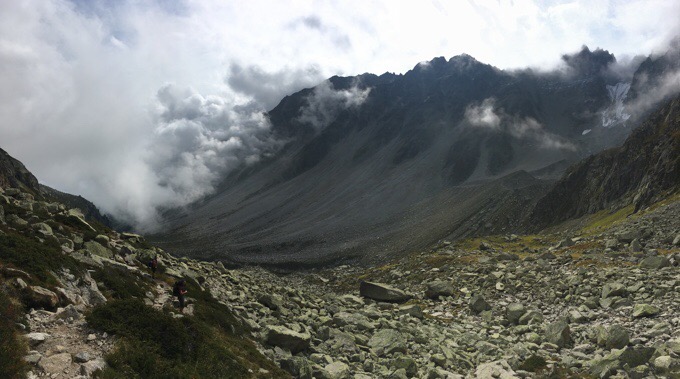 The path varied as trail, track, and road as it went down valley to Champex. It followed a cute little manmade waterway that intentionally diverts the water to where it’s needed. 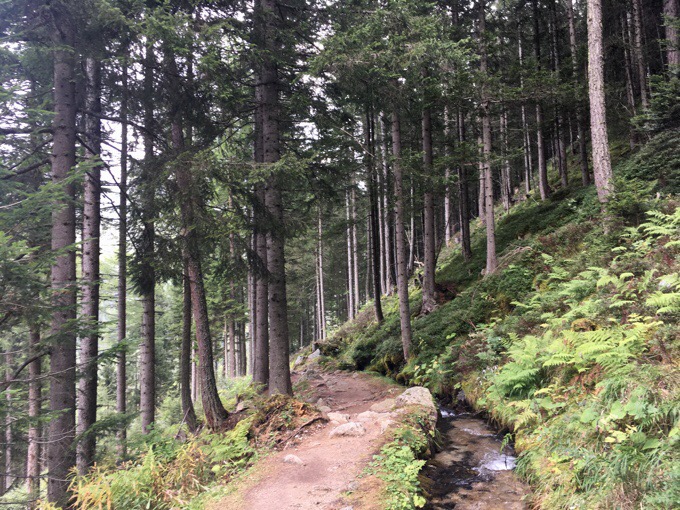 I got to the post office and store at 12:50pm, and it had closed at 12:30pm. It wasn’t going to open until 3pm, and surprisingly, this didn’t bother me at all. I went to the tourism center and used the somewhat average wifi to load the blog and catch up on correspondence while I ate my lunch. The time flew, and before I knew it, the store was open. I hardly needed anything, but I did have a Swiss SIM card sent to me from a very kind blog follower that lives out here and offered to add me to his phone plan. I was contemplating not getting a SIM and only using wifi for the time I’ll be here, so this was exciting. Long story short, for some reason, the card won’t work. We might figure it out, but for now, I’ll be sticking to wifi and posting when I can from towns.

A side note about Champex. It seems I’ll have some extra days possibly between finishing the Haute Route and my flight out of Geneva. The current plan is to return to Champex and hike the half of the TMB I didn’t already cover along this route and the GR5. It gets me back to my things I left in Chamonix and gives me something to do during that time. So, although the TMB wasn’t high on my list, I may finish it off this trip after all.

I somehow spent 3hrs in Champex and walked out at 4pm. I know foul weather is on the way in 2.5 days, so I have a goal of where I’d like to be by then, and decided to hike a bit later today since I’d missed some hiking time being in town for awhile. 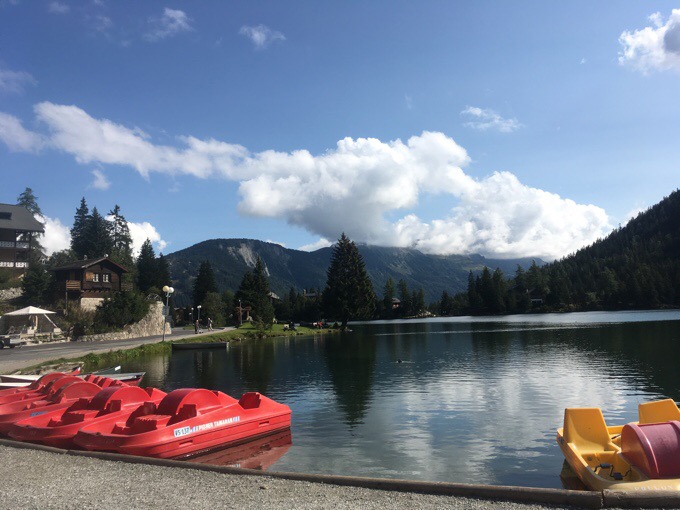 A lakeside walk on the way out of Champex.

The remainder of the day was relaxed walking mostly on track or road down a nice valley to the village of Sembrancher. It was good to end relaxed today. I’m still adjusting and need to find my rhythm out here. Today was a bit askew in a few ways for me with timing and comfort. 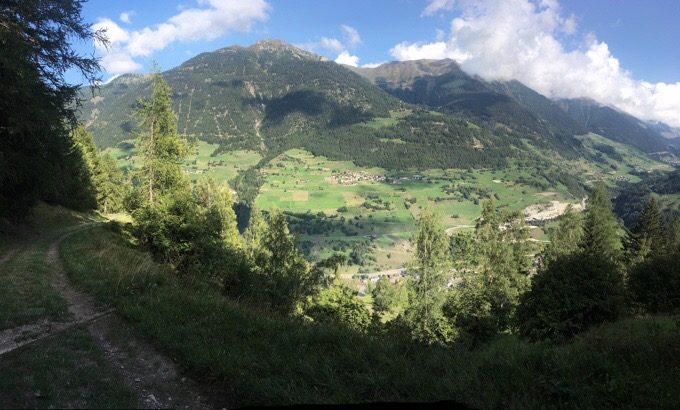 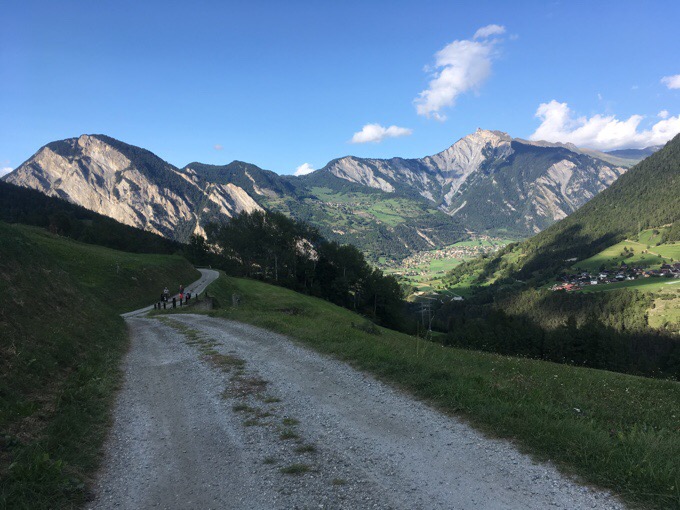 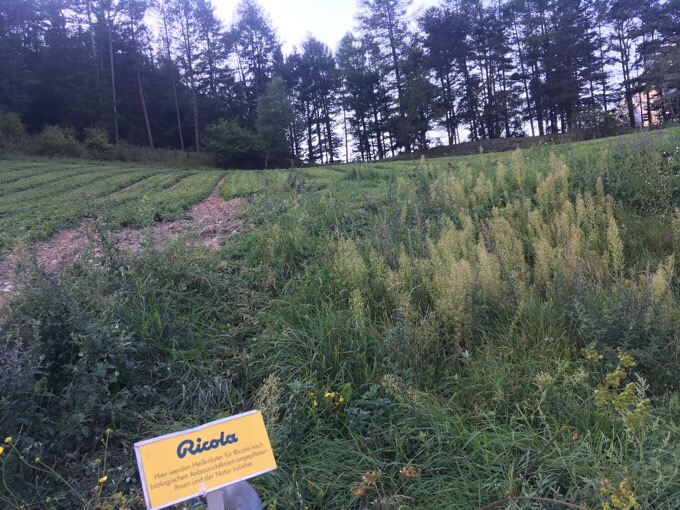 Not long after Sembrancher is apparently the main village of this area, Le Châble. I found myself between the two, and didn’t want to get too close to Le Châble and be unable camp, so I kept an eye out as I went through a forested stretch outside of Sembrancher. 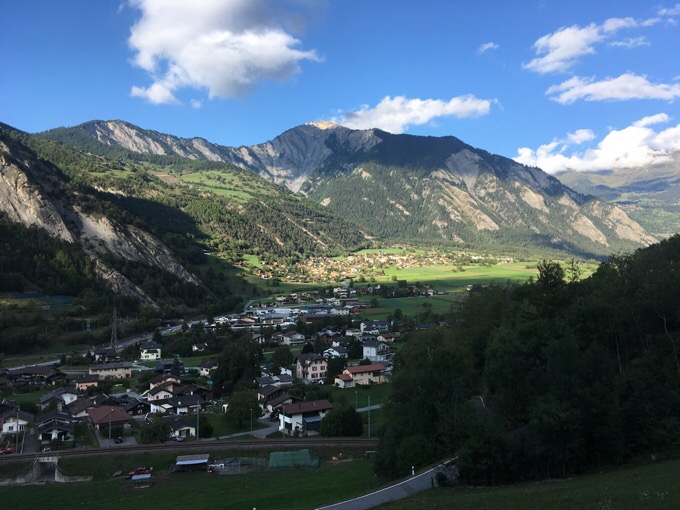 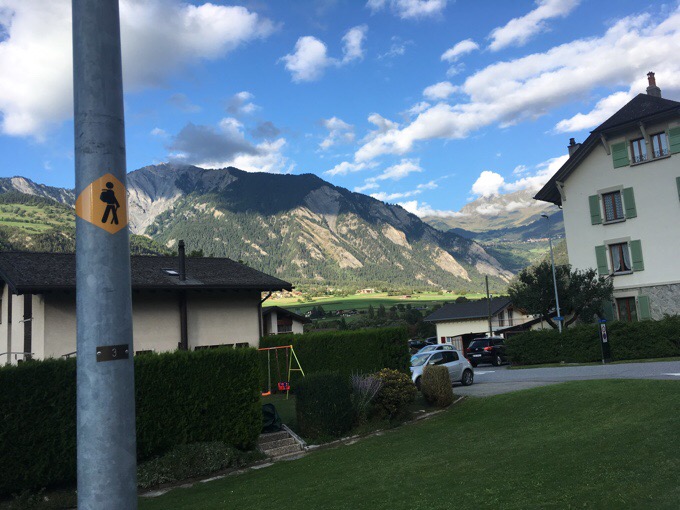 I was able to find a good hidden protected spot just a bit off the route when I climbed up an old path a bit. There’s a major road about a kilometer away, and the surprising traffic will be my white noise for the night. Temps are just right down here in the valley, and I’m happy to be low tonight. There’s a bit of a breeze in the exposed areas and the forecast has that temps are going to be dropping as this cold and wet front moves through. It should be colder tomorrow, especially up high, but dry for two more days. Fall is coming… 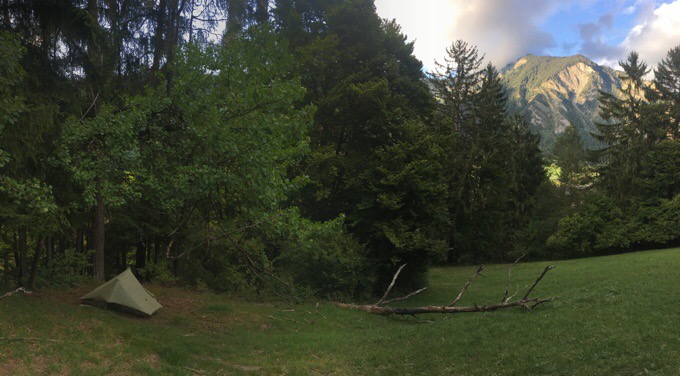