I was in a state of joy and enthusiasm all day today. What a perfect way to end this hike, and even more confirmation that I’m right where I’m supposed to be in time and space. Seriously, words just cannot express the calming joy and contentment that’s washed over me today. Can you tell I’m writing this as I sit in front of the Mediterranean on a perfect night after sunset? Yeah, I think some post hike and sunset endorphins have kicked in. I mean seriously, I’m listening to waves as moonlight shines off the sea I’ve now walked to two separate times this summer. Who’s life am I living?! This post is lengthy with more photos than most. More for my own benefit as this had many moments I want to have for my future self to see again.

It did rain on and off the first half of the night last night, and then I slept hard. I thought I’d wake early today antsy to reach the end, but I woke later than usual really calm and comfy. I could totally sleep on my NeoAir with my sleeping bag at home every night and be a happy sleeper. As I packed up, I had more correspondence confirming things with E, my ride share to Chamonix in a couple days, and my Airbnb booking for the next two days. It’s really amazing I didn’t leave anything behind with so much happening at once. I was super paranoid that I would. I got going just before 8am and it was a perfect day to hike to the Mediterranean! The sun was out, but I remained in shade, and the sky was clear of haze. The first part of the morning was wooded with moments of views to the Mediterranean. 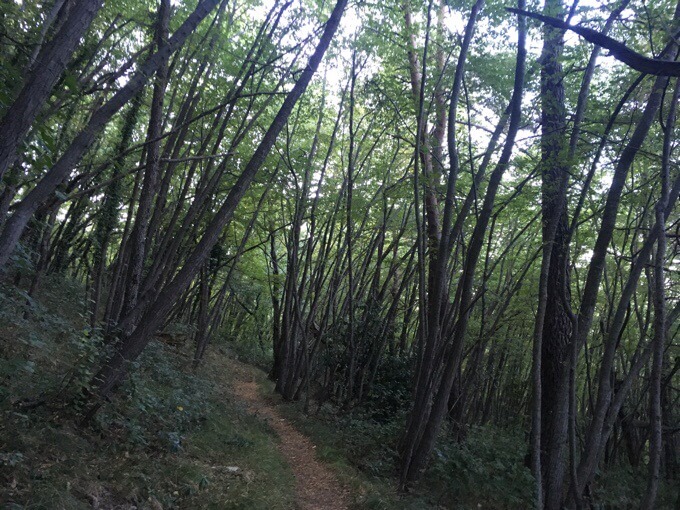 I was bummed to see an even better camp spot with a view just 5mins from the col I slept at last night. Finishing these shorter trails understandably doesn’t hold the emotion of a 4-5 month hike, but this one surprised me today. I got super pumped with each view as I inched closer to the end and the moment felt personally monumental. 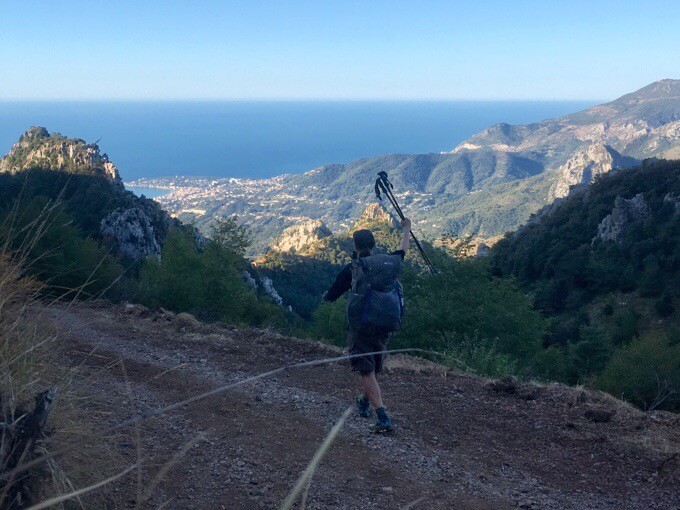 I thought back on this hike, and I have to say that it will go down as one of my most recommended hikes for people. It’s such a pleasant balance of challenge with rewarding scenery, and the added safety net of villages and refuges when needed. Some hike this whole trail without a tent and without needing to carry even a full day of food. In that way, it’s a very welcoming trail because people really can tailor it to fit their liking, and that’s pretty cool. It’s quite scenically rewarding with less physical exertion than the Pyrenees, but beware, it’s still a lot of elevation gain and loss. Just not as steep. The scenery in the Pyrenees was definitely grander with fewer villages and time in wooded sections, but the physical enjoyment and ease of carries on this one is what makes me recommend it more. I’ve really never felt so relaxed on a long trail because of how many options there are for shelter, food, and water.

There was one more rocky crumbly uphill thrown in there this morning before the final dive down to sea level. At first I was annoyed by the climb after being toyed with a descent that seemed straightforward, but then I forgot all about it when I popped out high and got more views of the coast. 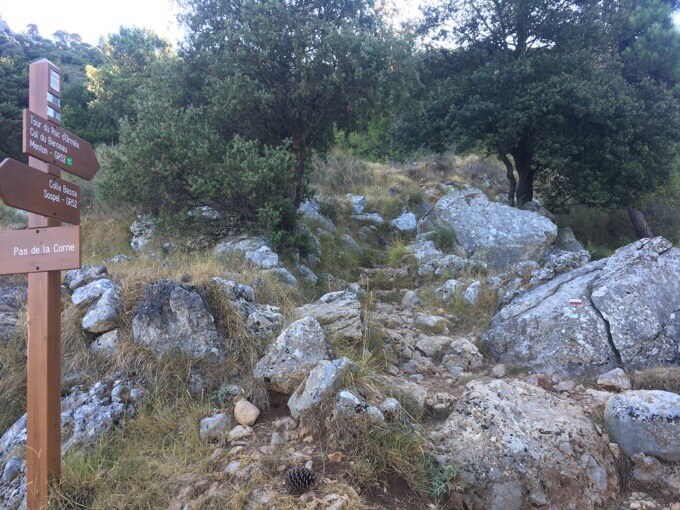 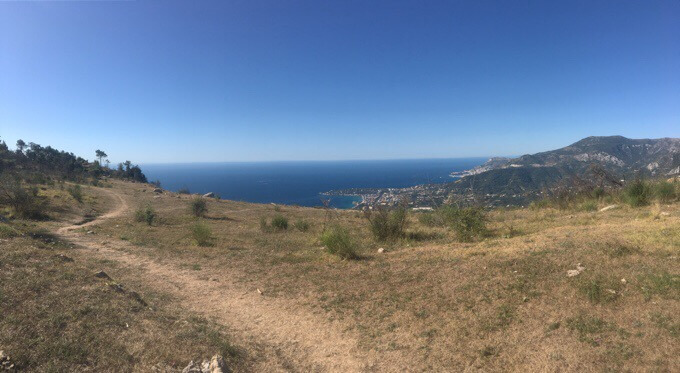 There is no water source for the whole section from the village of Sospel yesterday to Menton at the end. The guidebook says 7hrs of hiking, so I think that’s the longest stretch on this hike without water. It actually fails to mention it for people who don’t look ahead. I saw one puddle that could be used in an emergency, but I bet a ton get caught assuming many of the small mapped side streams would be flowing. As I was thinking that, I came upon my first official European trail magic! It was like I was in the US! They had a shaded canopy, cool water, beers, a few bars, and a book to sign. It was so randomly unexpected and in the perfect spot. I bet a ton of people are thankful for that one! I had enough water and was too excited to finish to stop long, but it was a great spot. 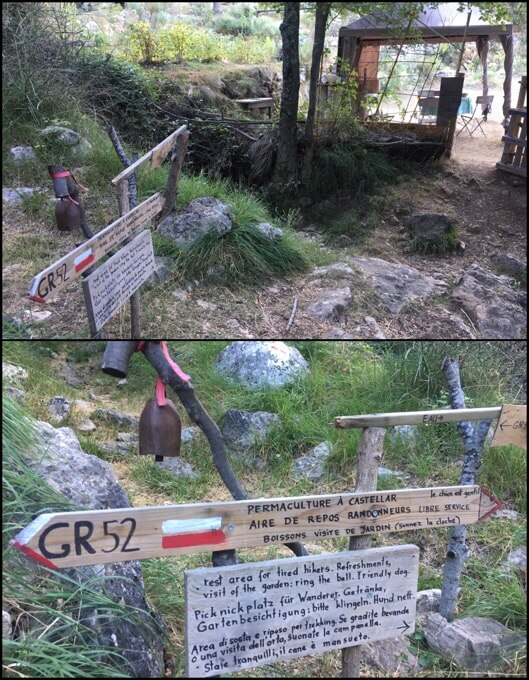 Much of the descent was crumbly loose rock. The kind you could easily fall or twist an ankle on if you got lax in the final miles. It was frustrating to be so close to the sea, and have a long downhill, but be moving in slow motion to avoid falling. 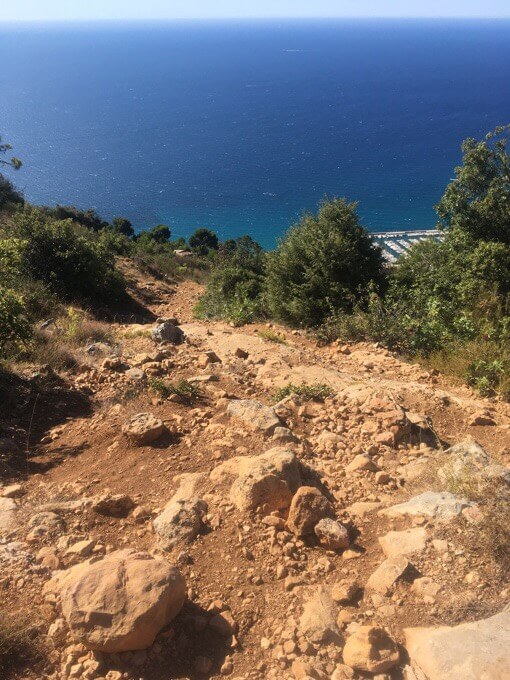 Careful footing on the way down. 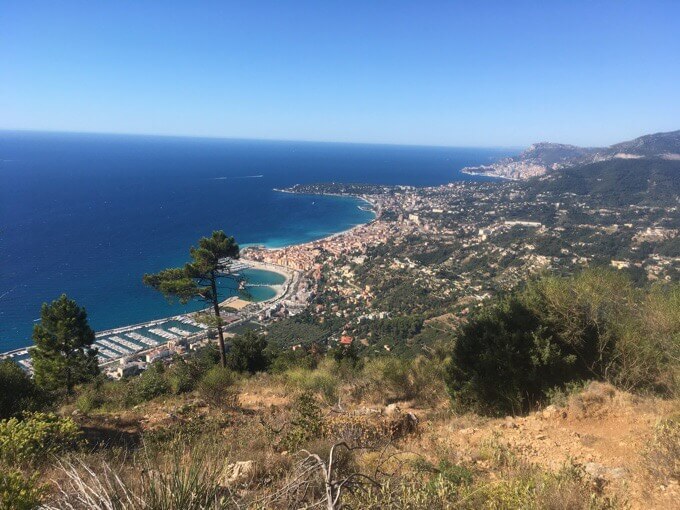 Finally, I reached a paved road, followed the winding path between homes, and reached the Mediterranean! 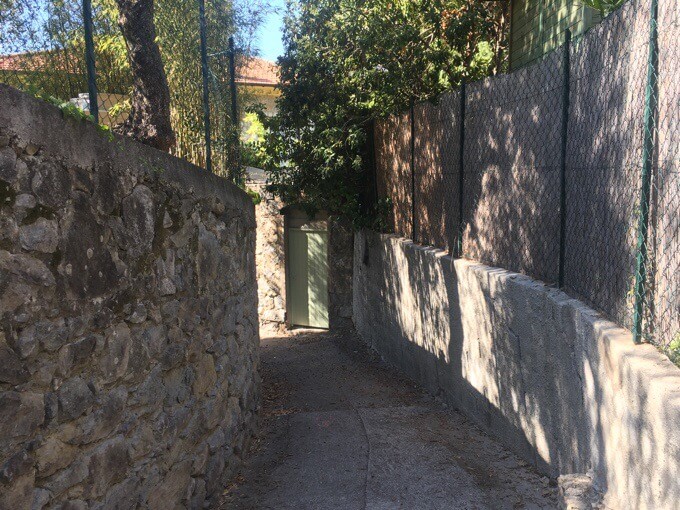 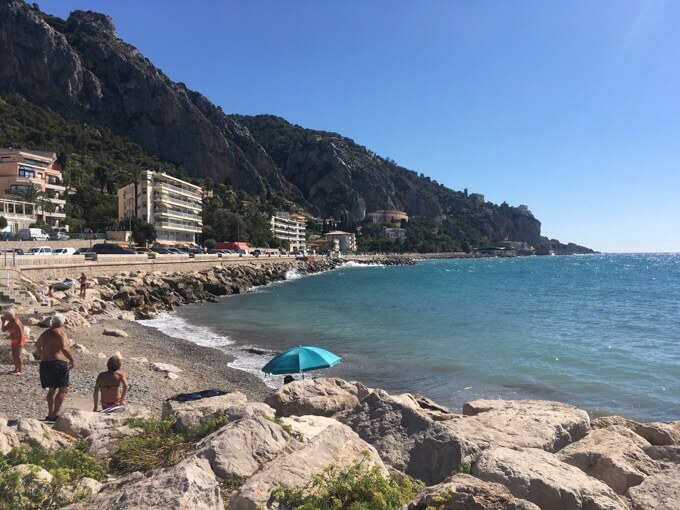 It was 11am and just perfect outside. The guide directs you to a small sandy area near a harbor in Garavan, but really, you can cut anywhere toward the coast in neighboring Menton and eventually hit a beach. There’s no official signage on this one. Technically, I’m on the GR52 ending alternate to the GR5. The main GR5 route isn’t traveled as much because it avoids the final days in Mercantour National Park most prefer to end with. It does end in Nice, which I will still visit in a couple days. This ending was wonderful in my opinion. 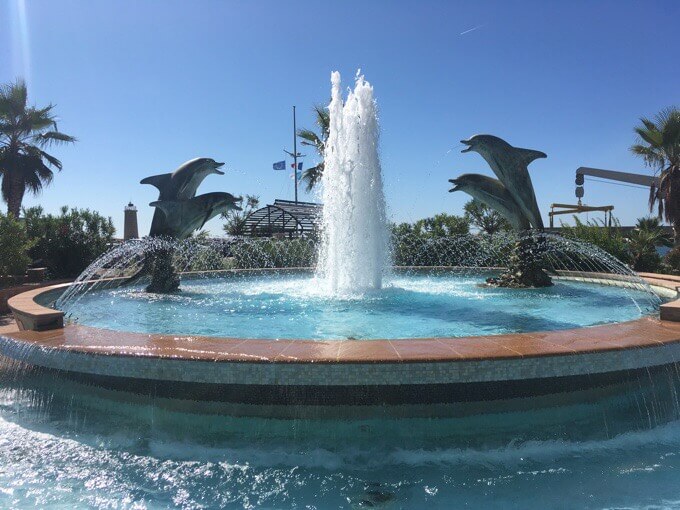 I’m adding dolphins to my list of wildlife sightings.

I had a stranger snap some photos, didn’t have the want to get all the way in, and rinsed off all the dust from this morning in the public showers right on the little beach. 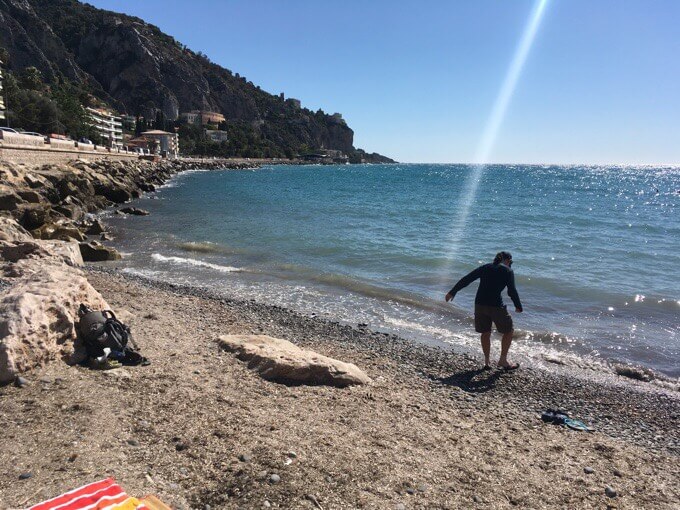 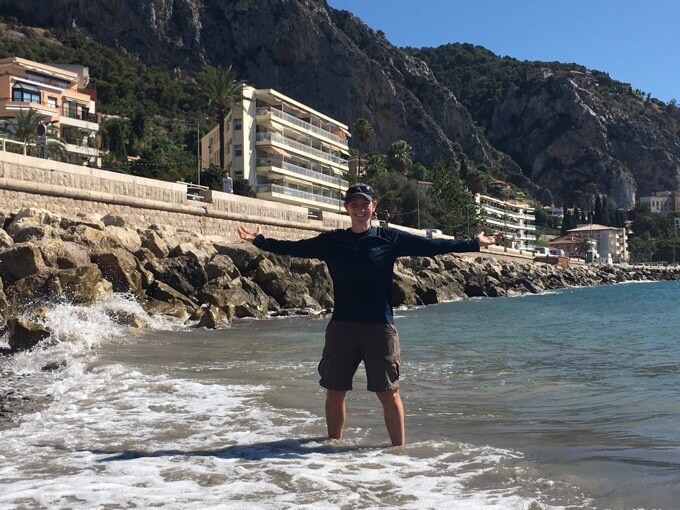 Really, ending a trail at a town is my new favorite ending. I’m so spoiled now. In the past, I’ve always ended long trails at remote spots (except the Te Araroa) that require hiking or hitching further to a town. Here I got an immediate shower and crossed the street to get a celebratory strawberry popsicle that hit the spot on the increasingly warming day. 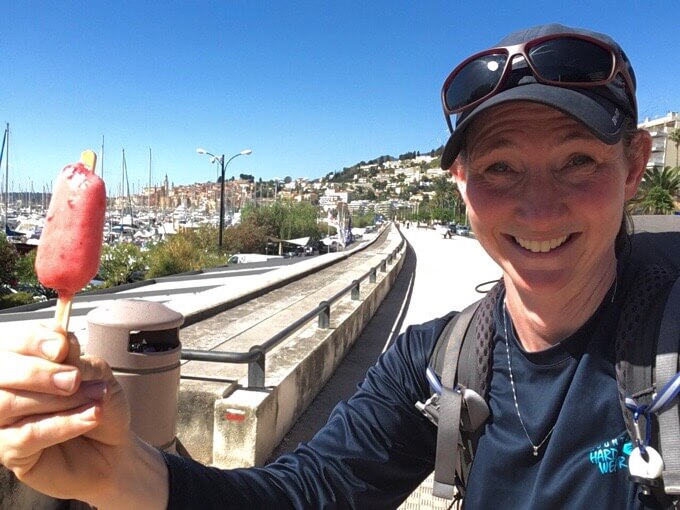 Notice the trail marker on the concrete in the center.

Then I had a nice walk in flip flops along the coast to the much larger town of Menton. It’s super touristy and busy, but I seemed to be hitting it before the crowds got going. I wanted a milkshake badly, and knowing that it’s tough to find a thick one in Europe, I turned to the trusted McDonalds. I noticed the high prices of all the other burger options I’d passed and ended up having my first McDonalds burger in 20yrs. I tend to get the chicken wrap on the rare occasion I eat at McDonalds, but I really wanted a burger. I did first do a Google Maps search for Subway, but no luck. This celebratory lunch was right at the price I was looking for. The milkshakes are so small in Europe, I’ve learned I need to order two. 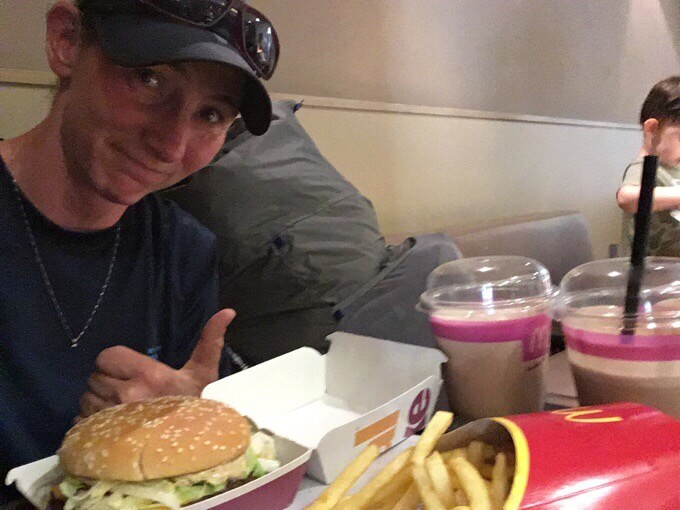 Then I walked to my Airbnb. On the way, it was like a surreal moment of a soundtrack playing in my head as I walked these cute french streets. Wait, it wasn’t in my head!

I wanted my own space and good wifi, so I splurged on a 70€/$78 Airbnb, which was very comparable to low end hotel options in Menton. A tip for people looking at last minute for a place. I was in a bind looking for a Fri/Sat night, so I found one that required a 3 night minimum that hadn’t been taken and messaged them to see if they’d take less since it wasn’t booked. I’ve done that a couple times and it works well. Also, as I’ve done before, book one night and then pay cash for the following nights. It was 70€ for the first night through Airbnb fees, and just 50€ for the second night for cash without service charges. Plus, the woman had a second property that was available and right in the heart of town center. For what worked out to 60€/$67 per night, I have a full apartment in an awesome location. There’s one other person in a room tonight, but we didn’t overlap other than a greeting as we each were doing our own thing. Try booking a furnished apartment with a kitchen at that price on the Mediterranean coast on a summmer Friday and Saturday night. It’s awesome! 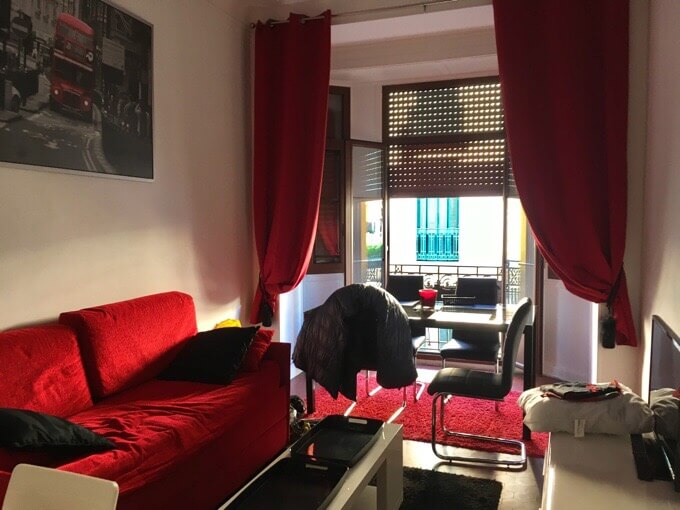 I am just not in the mood to spend a ton on eating out, so I went to the grocery store and stocked up on everything I’ve been craving. I worried I got too much, but I’ve already eaten much of it! Chocolate milk! Eggs for breakfast! Salad! Brownies!!! 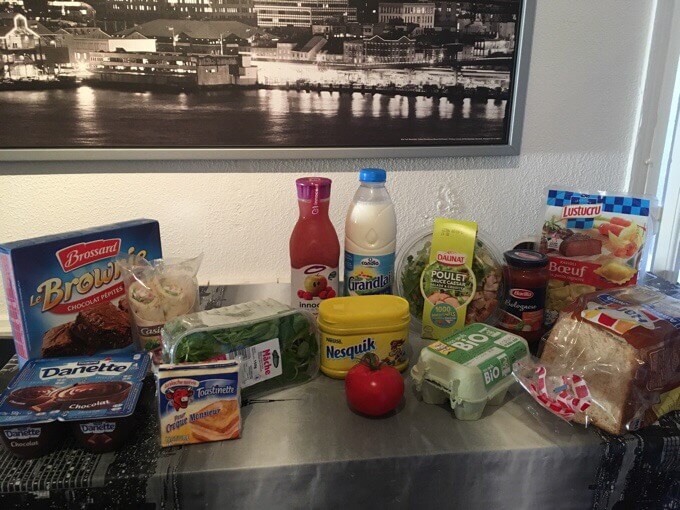 I worked it out that I’ll do a ride share to Chamonix through the awesome European app, BlaBlaCar. People post where they are driving and anyone looking to carpool and pay a bit can take the ride. People have profiles, stats, and reviews (like Airbnb) on their previous rides. I had the option of a full day on multiple trains and buses for well over 100€ or a 4-5hr drive for just 34€. The ride isn’t for two more days, so I get the zero I wanted tomorrow in Menton, and also get time to visit Nice the next day before my ride. I’ve heard the drive (through Italy I believe) is great too. The afternoon flew by with town chores. I’ve mastered this European laundry thing. Wash them either in the sink or shower, wear my shorts and shirt wet outside (dry in 10mins) as I lay the rest out to dry. 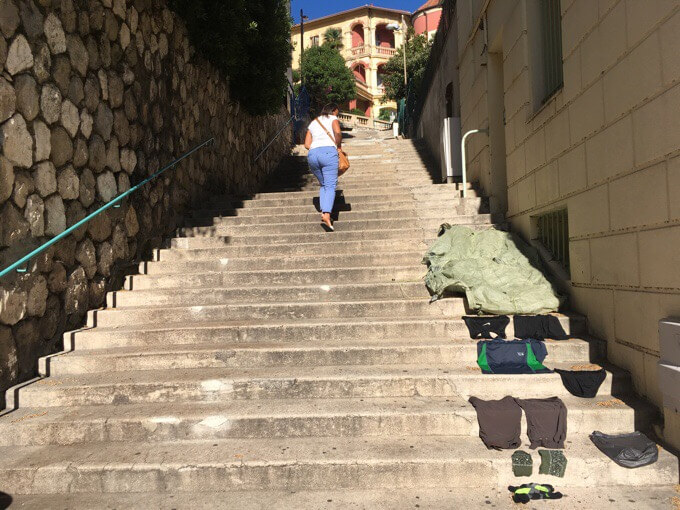 Then after dinner, I walked the couple blocks down to the water to see the sea as the sun set behind it. What a perfect night! 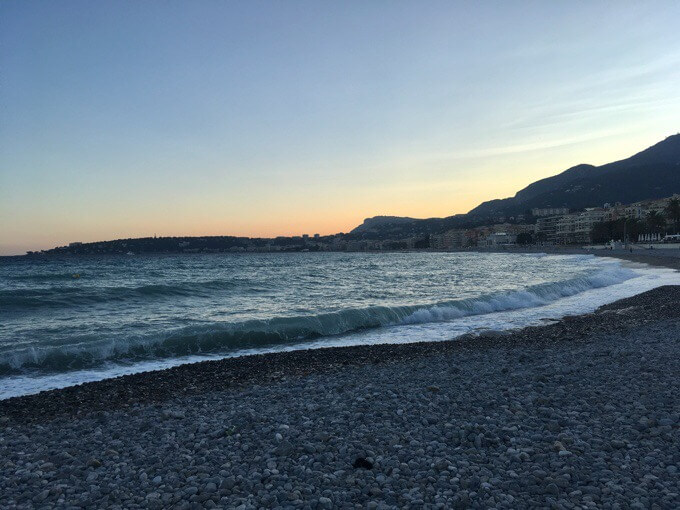 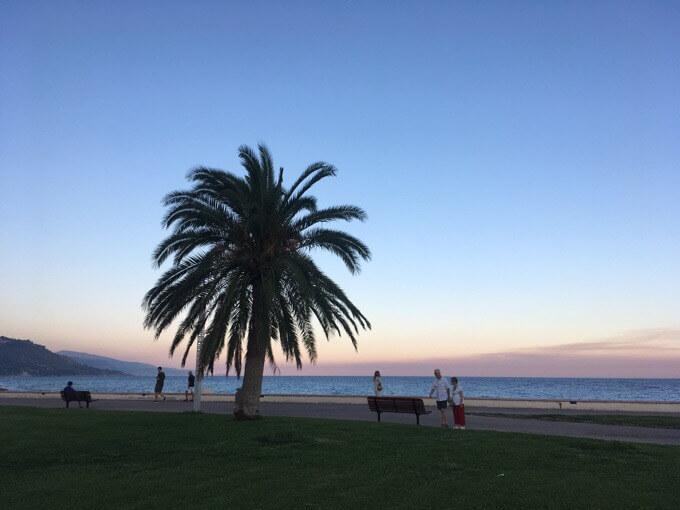 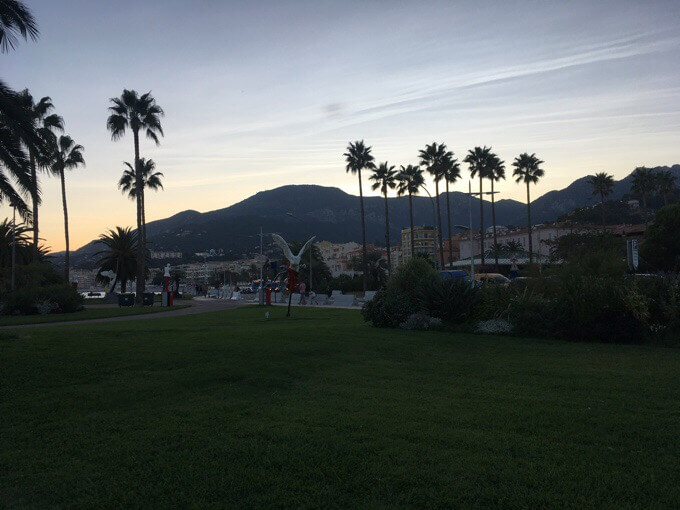 It had been so warm in the day that it made for the most temperate evening air. I’ve never sat by a major beach at night with no need for a jacket and no wind. I could have sat there all night! You can tell by this lengthy post, I almost did, haha. 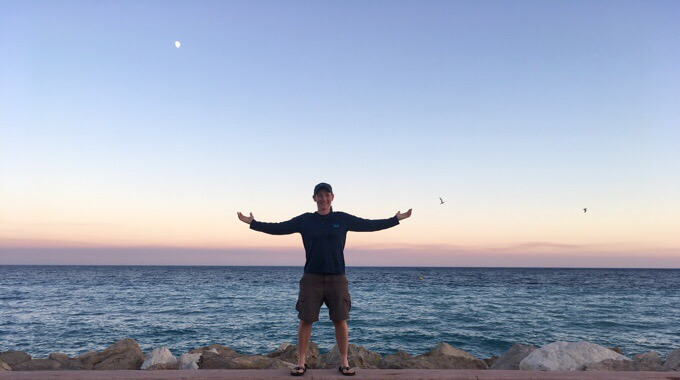 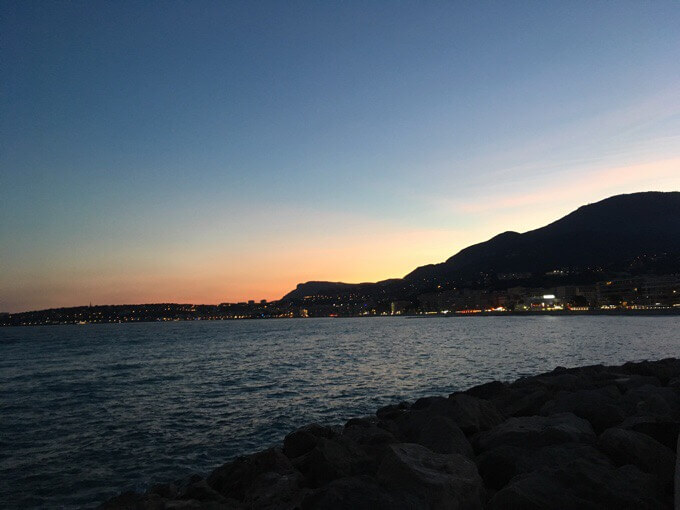 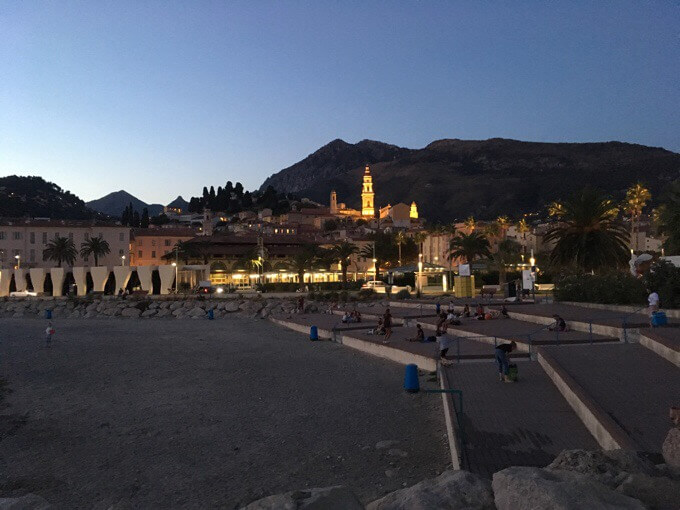 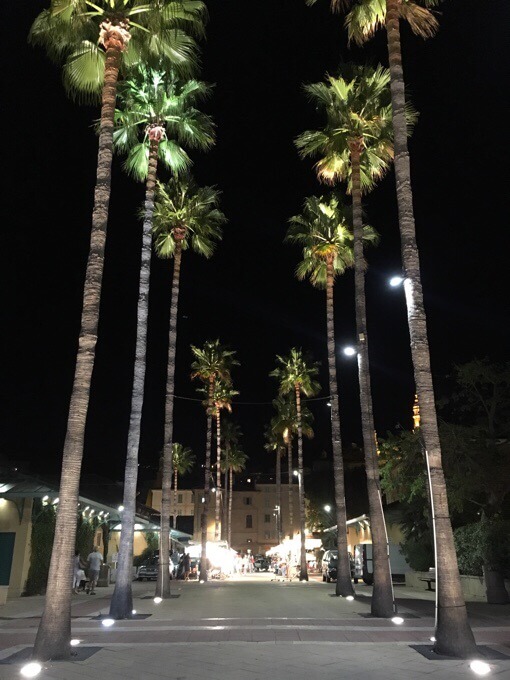 I’ll walk around Menton more tomorrow and probably will combine the next three days into one post to give me a break from daily writing before I start the Walker’s Haute Route Chamonix to Zermatt. I get to see E in Chamonix when she finishes the same route in a couple days. Rain and possible storms are forecasted for tomorrow. All part of this game of thru-hiking chess in which the strategy seems to have worked out this time! 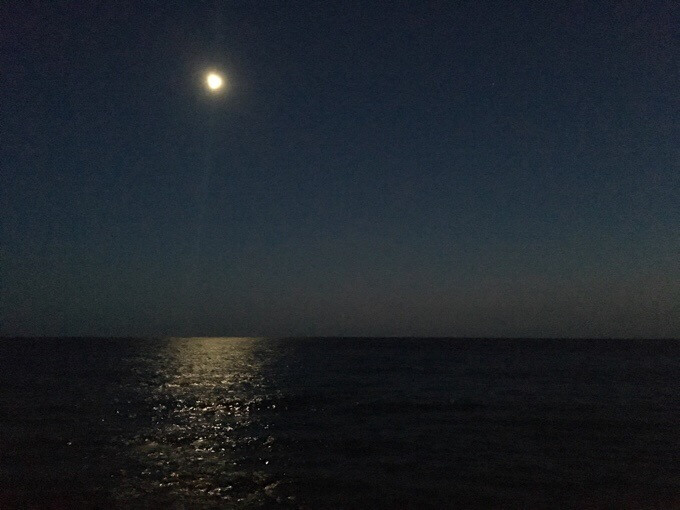