I was woken by construction down in the valley at 6am. I tried to go back to sleep, but it was no use. I packed up and headed out at 7:15am, up valley to Le Châble. I was on a wooded track for a bit and then in the more open valley along a stream. Morning clouds were still clearing, and I hoped they would since I knew I was headed much higher as the day went on. 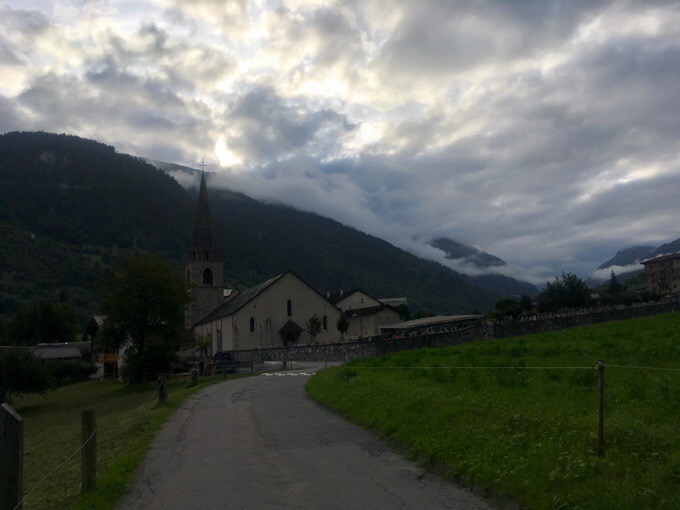 I got to Le Châble about 8am and spent an hour or so in town using the wifi and going to the grocery store. Then it was back to the route and my day of climbing. The route overlapped another in the area known as the Tour des Villages. It was signed fairly well, but I still found it helpful to have the GPS track because there were a lot of intersecting tracks that weren’t always signed clearly. 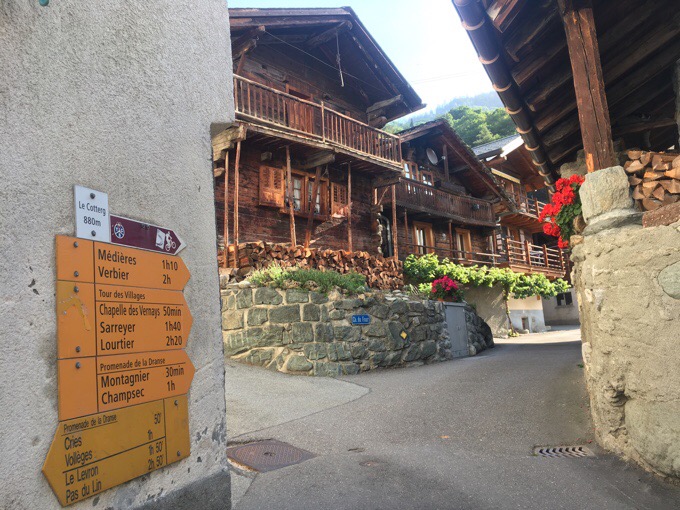 It followed old tracks, road, and trail winding up and up. It didn’t necessarily go through as many villages as passing a few homes, hamlets, a restaurant, and plenty of cute fountains. Not as historic or rustic as the ones in France, but cute. I still can’t believe how rarely I need to filter water out on these trails with so many fountains throughout the day. 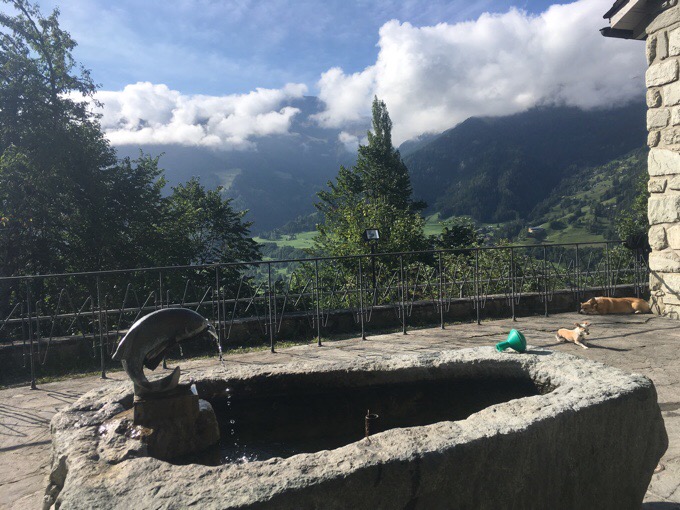 There was a lift that could bring people up, and that is a bit annoying to climb up, but it didn’t bother me much because it was out of view most of the day. 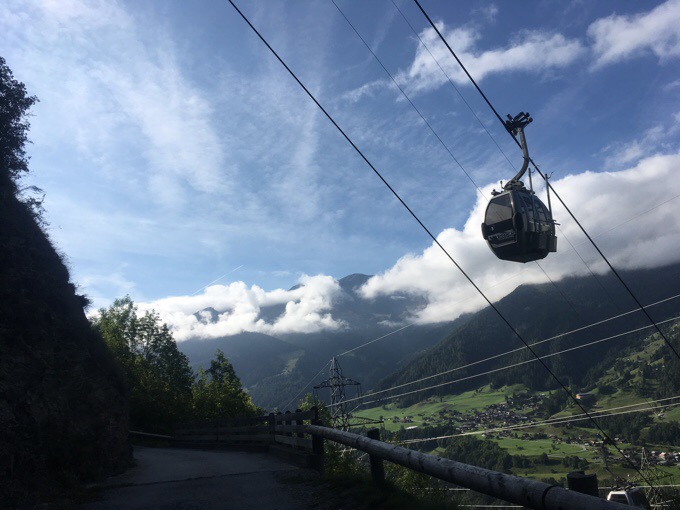 So close to just grabbing on for the ride up! 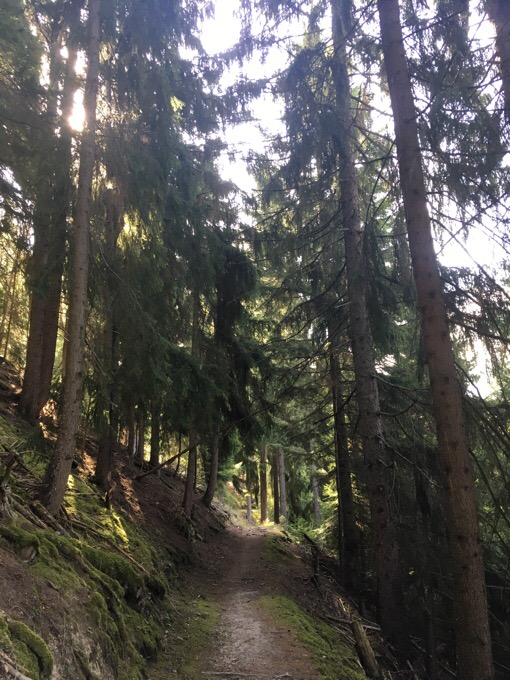 I feel like ever since before lunch yesterday, I’ve been in a connector section through valleys and villages to wind around to the next big thing. Just about the whole day today was spent climbing the same valley, Val de Bagnes. In that way, the scenery remained much the same in one valley, but just gaining more height and perspective. I took a ton of photos of the same thing because the view kept getting more expansive as I climbed above the valley. I should have just waited and taken photos at the top.

I didn’t do the math before the day started, but could see it was a steady uphill. Some of it was steeper than I enjoy, but overall it wasn’t bad. It ended up being 6312ft/1924m of ascent today with hardly any descent. The route paralleled mountain bike paths. It was the steepest one I’ve come across this summer, so the bikers were flying down and it was entertaining to watch. Each time I expected them to lose control with how fast they were taking hairpin turns. There were also tons of paragliders, so that was fun to watch too. 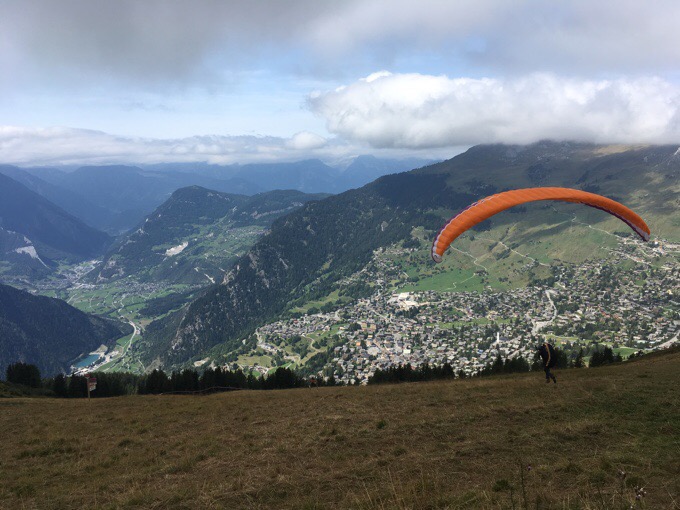 I could see I was reaching the height of the cloud ceiling, and felt the significantly cooler temps, so I stopped at a nice area with picnic tables for lunch before I got into the clouds. I was sweaty, so I was immediately chilled when I stopped and had to put on layers. My finger tips were numb by the time I started hiking again, but I warmed up quickly. 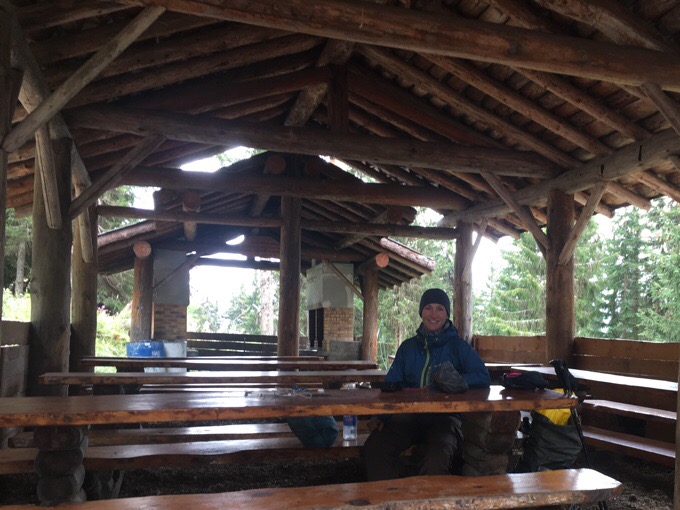 As I climbed up, I hoped the clouds or fog sitting on the mountain tops would lift. It was just barely covering the tips. I was thankful for the dry cool day, and that I could see most of the view. At one point some tips of mountains did poke out over the clouds, but not completely. 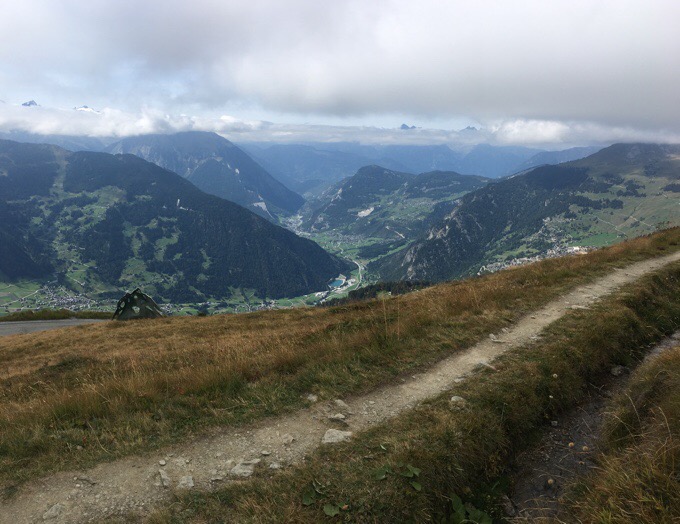 As I got to the end of this section of the route, it ended at Cabane du Mont Fort. I got to the turn to the refuge at 2pm, and was almost level with the fog at that point. The next section was further uphill and definitely into the fog. I took some time to read over what was ahead and if I should call it a day. I have plenty of time and I’m here to see things, not a wall of fog. What’s the point in walking in fog all afternoon, if I don’t have to? I did the math, and am still lined up well for where I want to be when the rain front comes through in two days. I decided to go up to the refuge and see how much it cost or if I could camp nearby and hang out in the warmer inside for a few hours. It was full, but they did say I could hang out and then tent a fair distance away. 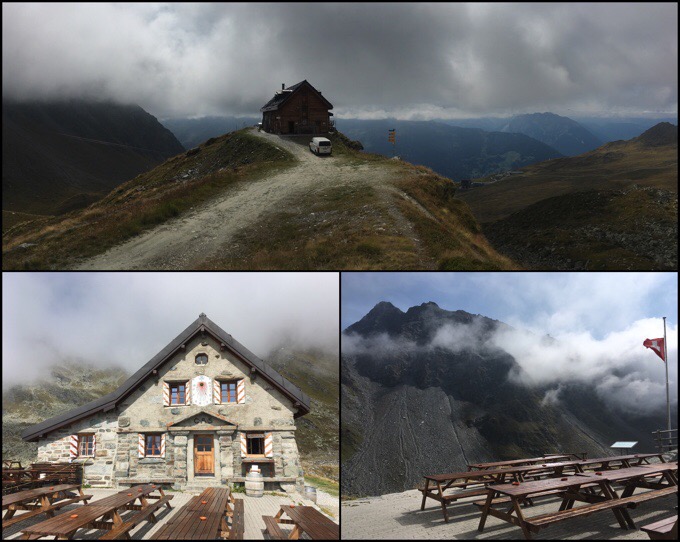 As I sat there, the 60 people expected to stay the night started to arrive. I got real antsy to leave and kept looking outside for any hope that the fog was going to lift. I knew tomorrow would be really clear and that it would start clearing tonight. I do love the independence of having a tent and not being tied to the refuges on these hikes because it opens up so many options. As I’ve mentioned before, I enjoy the strategy of optimizing my time outside. I like to hike a lot when weather is good and I feel well. Then I can afford the time to not hike if weather is poor or I don’t feel great. Well, both foul weather and a tired body (monthly period) are coming in the very near future, so I want to hike now if I can. After an hour in the refuge, I looked out to see the fog had moved much higher and might actually be clearing. I even got to see the far view of the range the book kept mentioning of Mount Blanc and surrounding mountains. I decided to go for it! 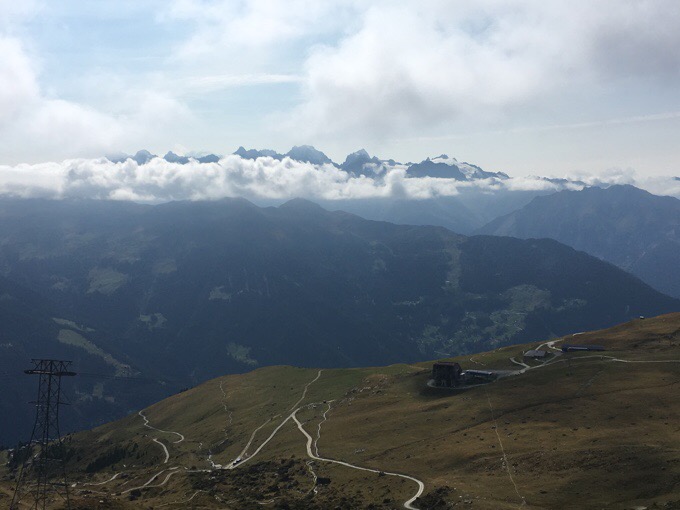 Mount Blanc is not very noticeable. It isn’t the highest from this view and is middle left.

I knew I’d be hiking the same valley and view for at least an hour, so I just hoped I’d at least get moments of the view as I climbed up. I was immediately happy with my decision to move on. The fog didn’t fully lift as I continued further up Val de Bagne. I was hoping to get a complete view of Combin massif, but it was only showing in bits. I did get to see the view at moments and I was satisfied with that. 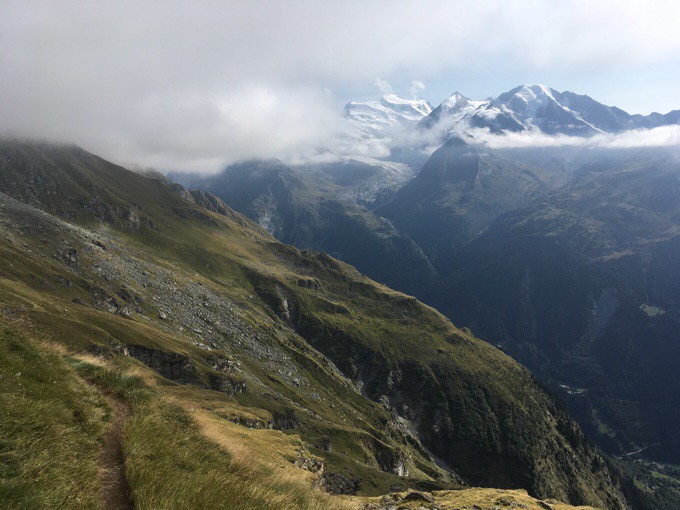 I was on the Sentier (French for trail) de Chamois. I had the trail all to myself, and that’s such a great feeling. The book says to keep an eye out for ibex and chamois. I turned a corner while going across some rocks I was focused on. I heard a noise, and looked up to see a group of chamois (or are they ibex??) right above me blending into the rocks! Score! 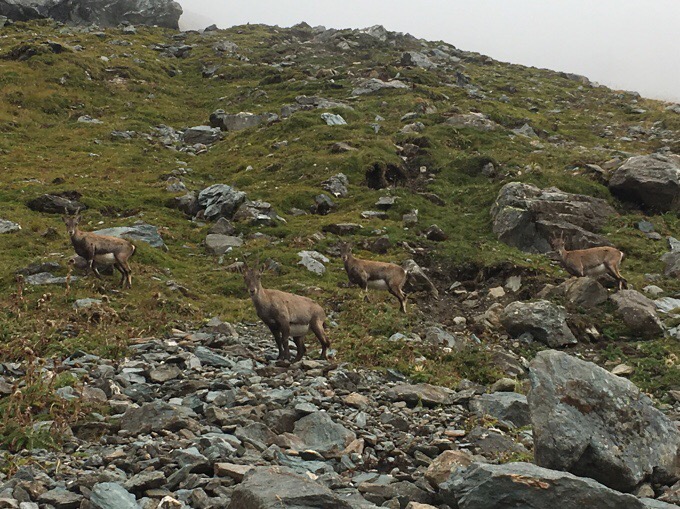 I continued up to Col Termin, and was rewarded for efforts with a clear view on the other side of the col! 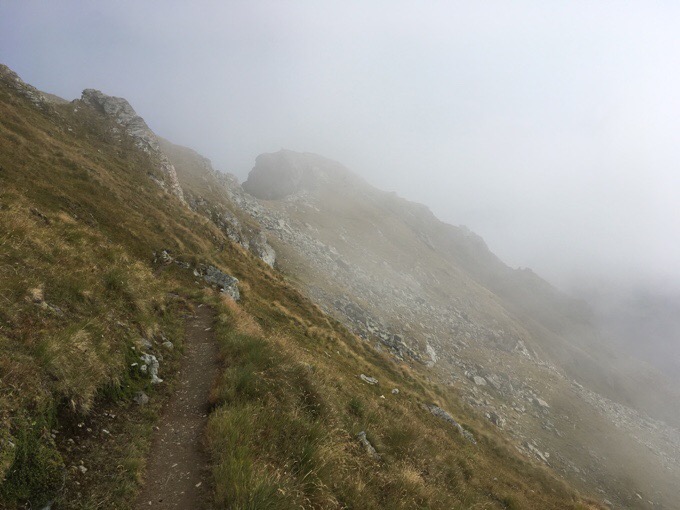 A foggy approach to Col Termin. 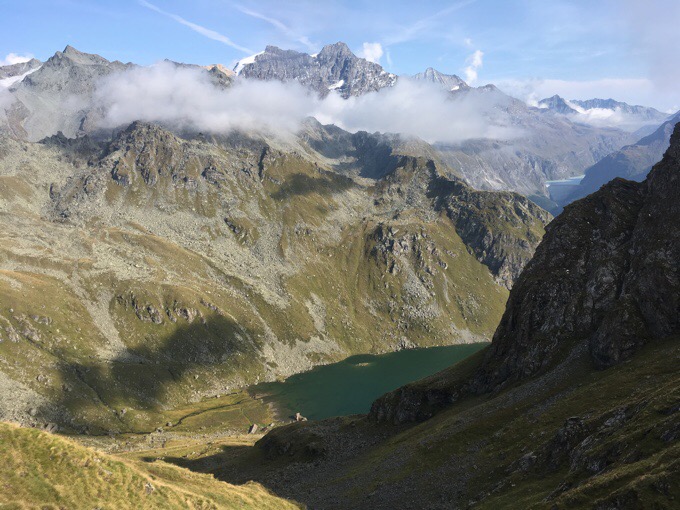 But clear views on the other side of the col!

Now in a new valley, the views were the clearest I’ve seen them this whole route. Rather than dropping down, the route remains quite high (above 7800ft/2400m) and traversed along the valley toward Col de Louvie. It was really energizing. I was so excited and happy I’d decided to continue on. 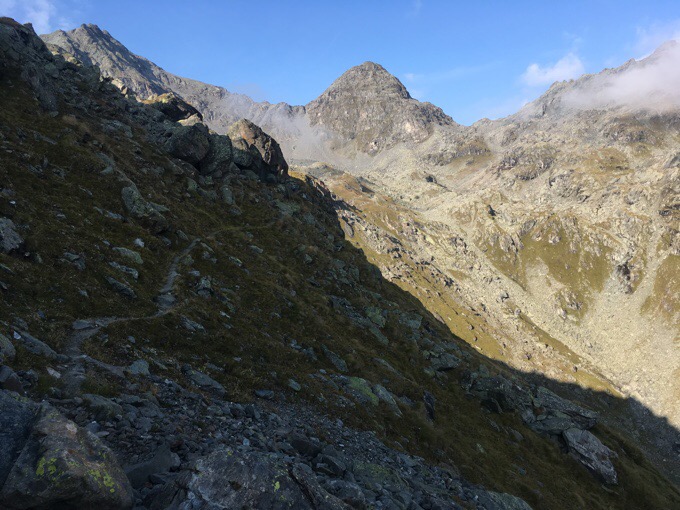 On the way to Col de Louvie.

The final reward for the day was that Combin massif completely cleared and was glorious. Pictures really don’t give the effect of how grand all these things are. I’m thankful that I was able to see them. 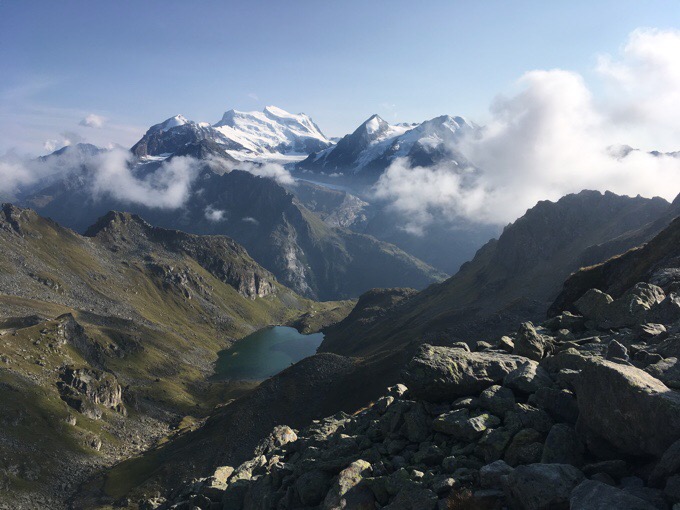 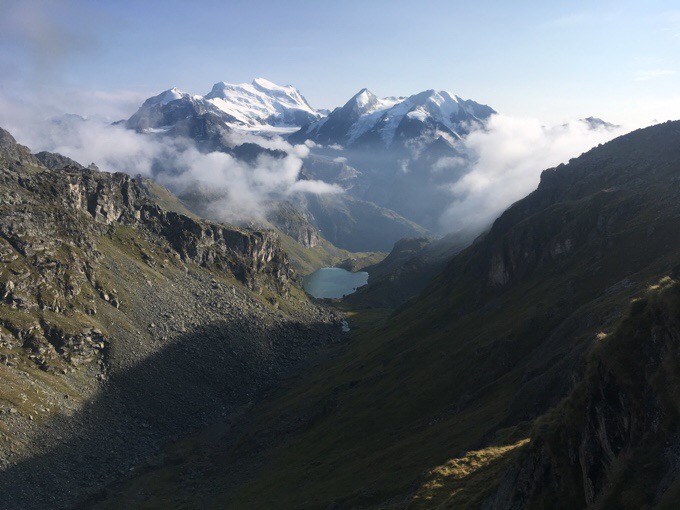 I had a guess on the map where there might be water and a flat spot to throw the tent up before Col de Louvie, so I hoped I wouldn’t have to go over it. The one group of hikers I saw this second part of the day were coming towards me and confirmed there was water at Torrent Louvie before the col, but questioned my ability to find a flat spot among the rocks. That’s all part of the fun! I knew the elevation was flat enough. I just needed to find a spot big enough to squeeze the tent in, and I did! 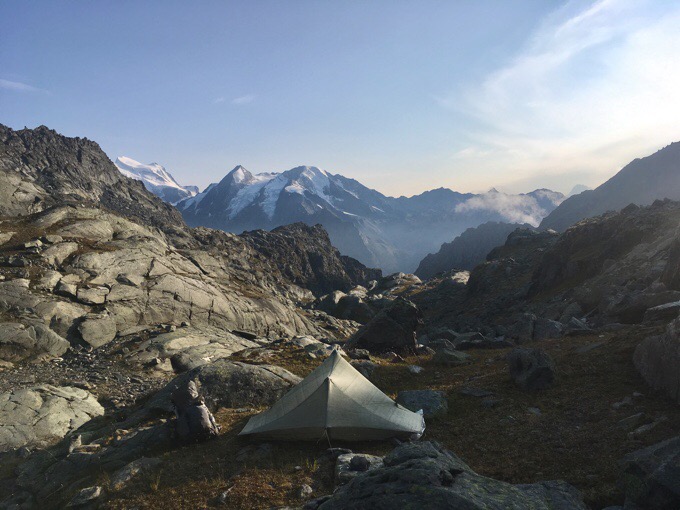 I’m up quite high (8902ft/2713) and temps are expected to drop just above freezing (hopefully not below) tonight. I had the goal of getting setup and in my sleeping bag before the sun dropped behind the mountains and just barely made it. Ah, dinner in the sleeping bag. 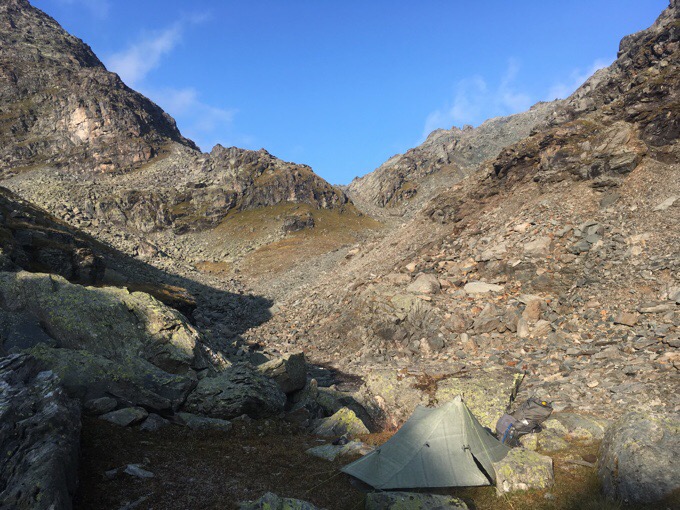 There isn’t any wind and it’s super peaceful. I’m all bundled up and quite warm. I luckily had to pitch the tent up against a rock that totally blocks cold air from coming in on my face. I also have the strategy of opening my umbrella up in the vestibule to give more of a wall of warmth. It’s totally working and I’m super cozy. The problem will be the motivation it will take to get out in the morning to dig my daily hole. That will be a cold one! I’m sleeping with my water filter (Sawyer Squeeze) just in case so it doesn’t freeze.