Just Make It To The Start

The goal today shifted a bit due to my stomach issues. We had about 3hrs left to ride on a windy bumpy road to get to Taplejung. We hoped to leave at 8am and get maybe four hours of hiking in once we arrived. As I packed up and moved around, my stomach started seizing again. I took an extra hour to lay down and let it quell before trying the drive, so we left at 9am. I sat up front and surprisingly handled it well. At least it wasn’t getting worse! 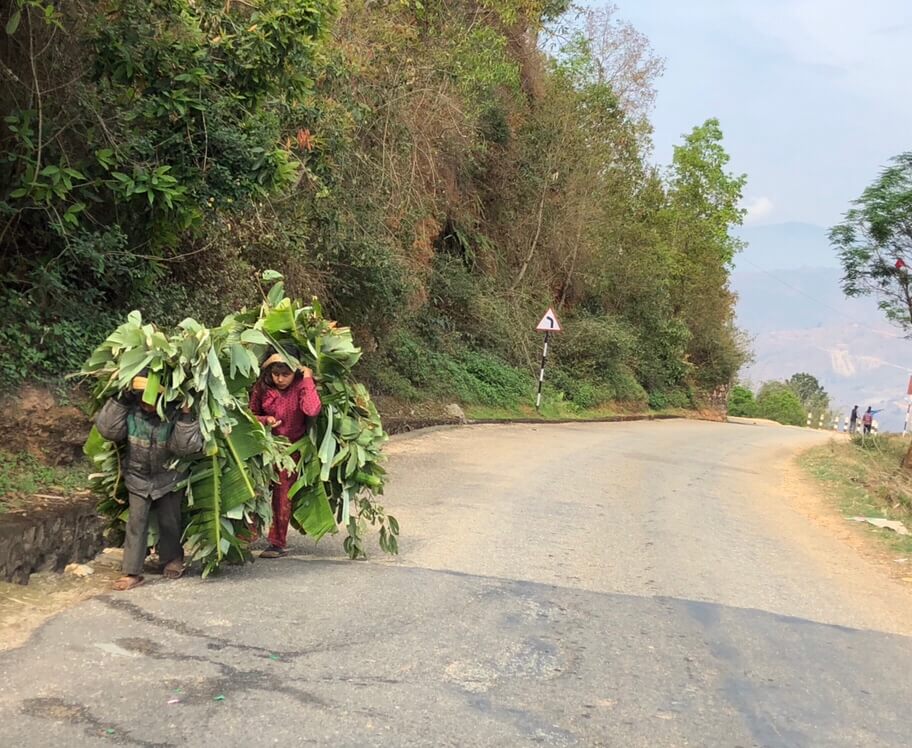 B-30 noticed that, although he’d mapped our track from Taplejung, our actual trek begins at Suketar Airport 4mi/7km outside of Taplejung. We would have flown directly into the Suketar Airport from Kathmandu if the 13 person plane hadn’t been sold out like a month in advance and only offered every few days. Our driver was able to drive us up to the airport, which was an additional 2,000ft/610m higher. Our driver charged $30 more for the 4mi/7km drive up the paved road to the airport. Buck-30, the accountant, counts every penny. He wants everyone to know, “We paid 16% extra for an extra 5% of driving.” That put the drive from Bhadrapur at 9hrs (not the 12hrs we had heard) and we paid $210. With how rough the roads were, and how far our driver is from home, that was a great deal in my opinion, but it’s all relative I guess and I have no idea what the going rate is. 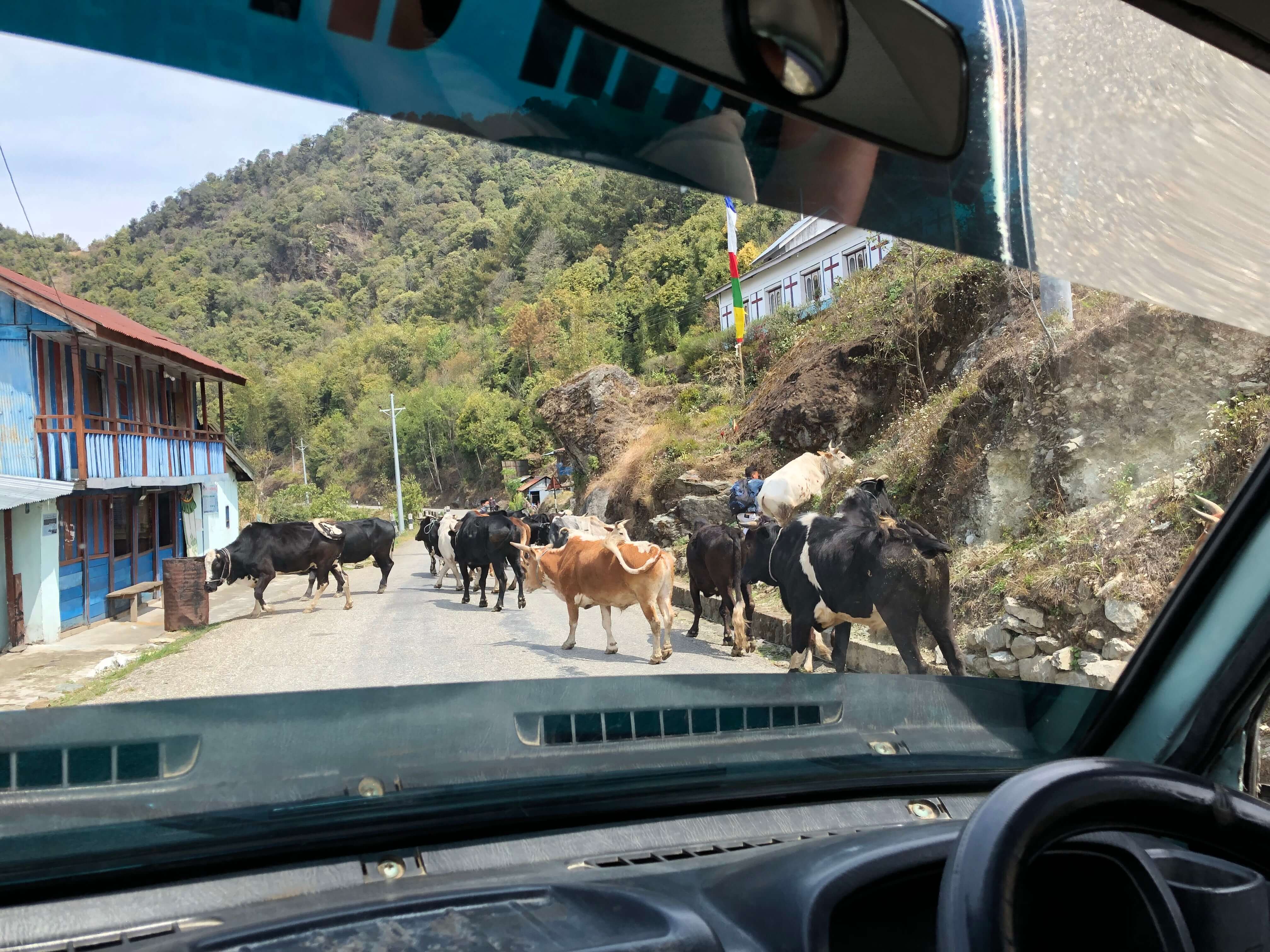 So, as to our schedule, my stomach issues didn’t throw us hardly at all, whew! We may have hiked a few hours today if I was feeling ok, but distance wise, we are on schedule because we thought we were hiking to the airport. 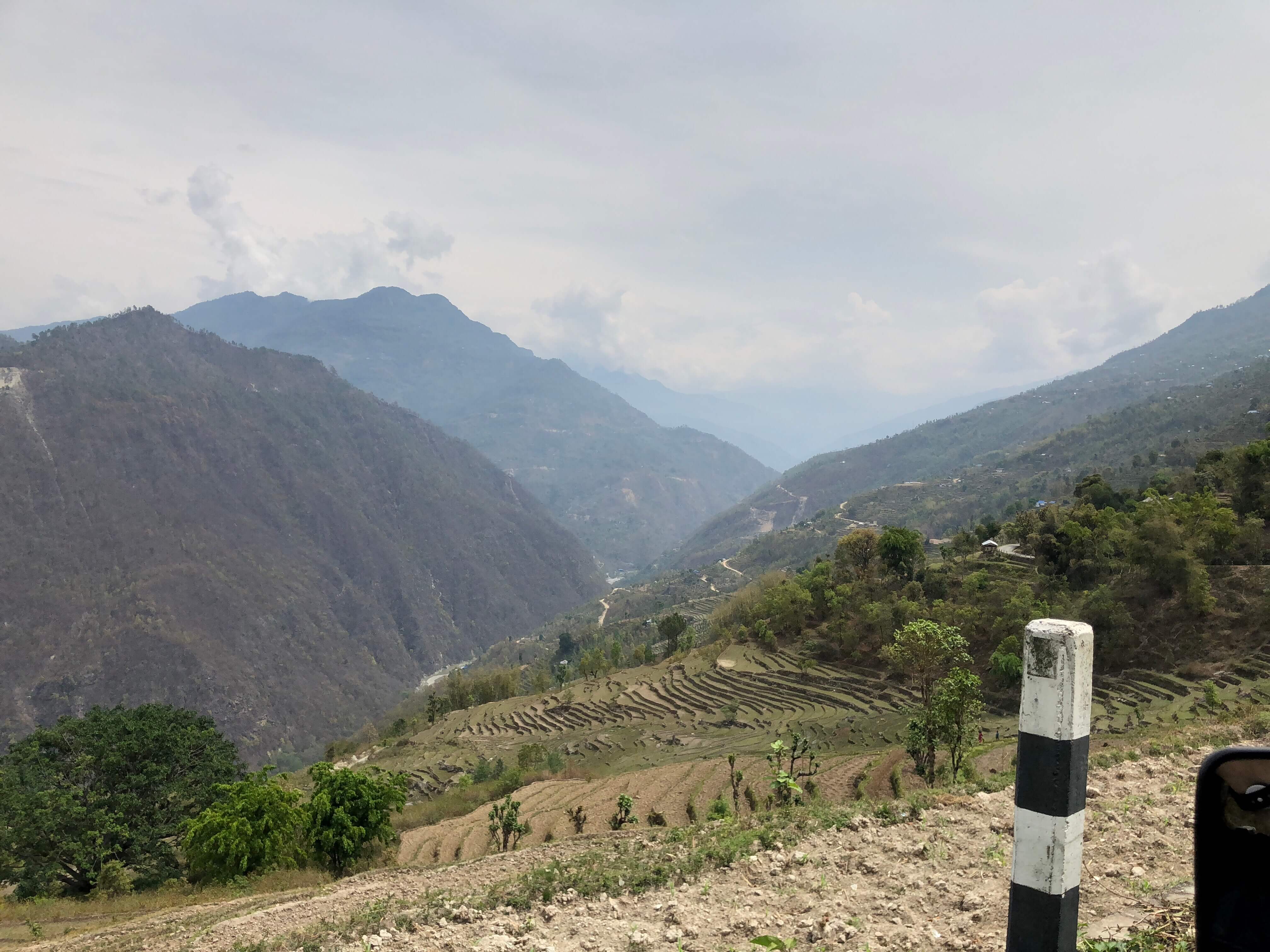 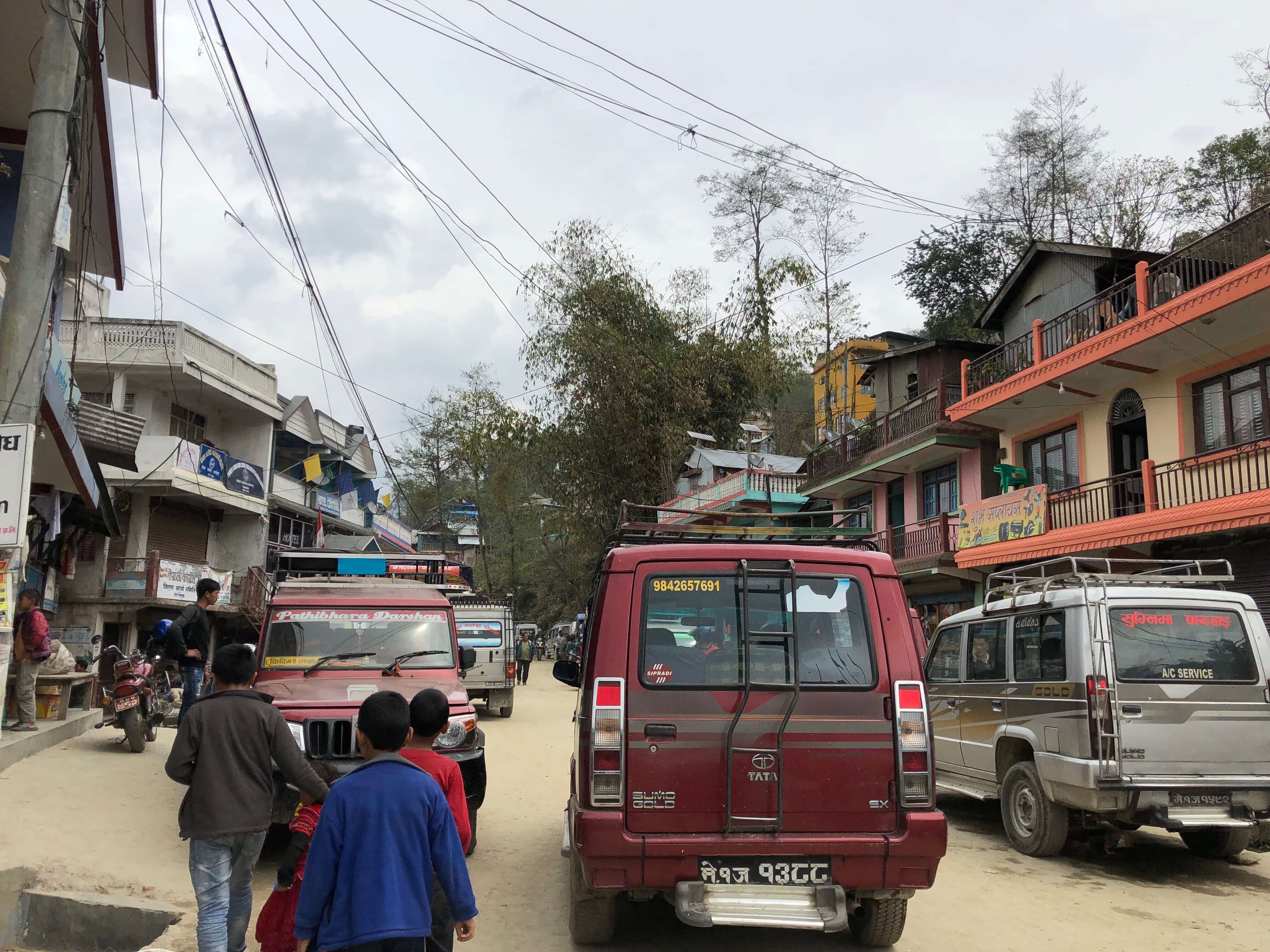 I didn’t take many photos and won’t write much because I’m just depleted. We are staying at the Hotel Heaven next to the airport at the end of the road and just down the hill out of sight a bit. It has flushing toilets attached to each room, score! No hot water, but that’s the norm. I think the next chance for a warm shower is 3 weeks away in Lukla. The guesthouse we stayed at was a bit pricey (for out here) at $10, but we were willing to splurge. Especially when splurge out here is just a few dollars, ha. The beds were really comfortable with tons of blankets. I slept a ton. 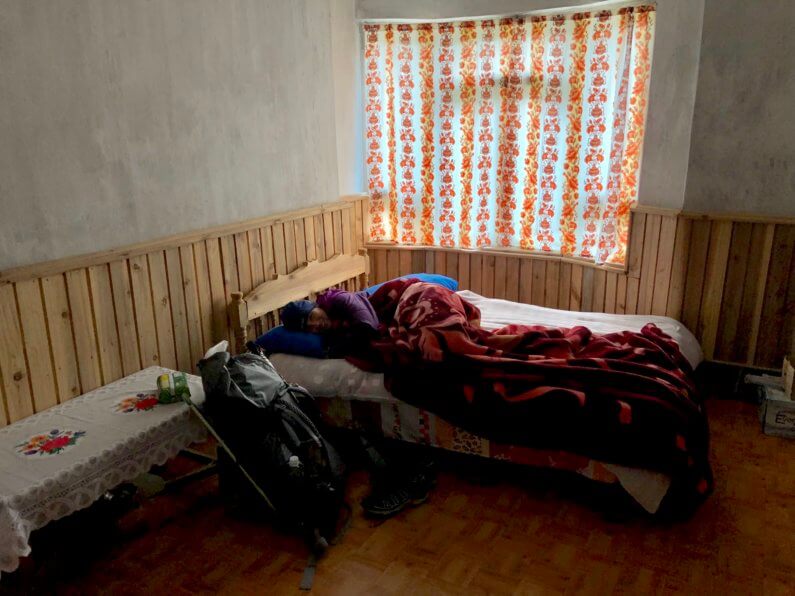 I was able to eat three small bars today and two liters of water, but it all went right through me. I had a failed attempt at dinner. It was rice and vegetable curry. I could only nibble a few bites of it before my stomach started seizing again. I ended up going up to my room pretty quick as it went right through me. I went to sleep by 8pm shivering. Not from cold, but my body just reacting to the sickness. I do feel that the worst of it has passed, and I’m just depleted. The hope is that after a solid night of sleep, I can wake up early and get some food down before we set off. Good thing tomorrow is downhill! 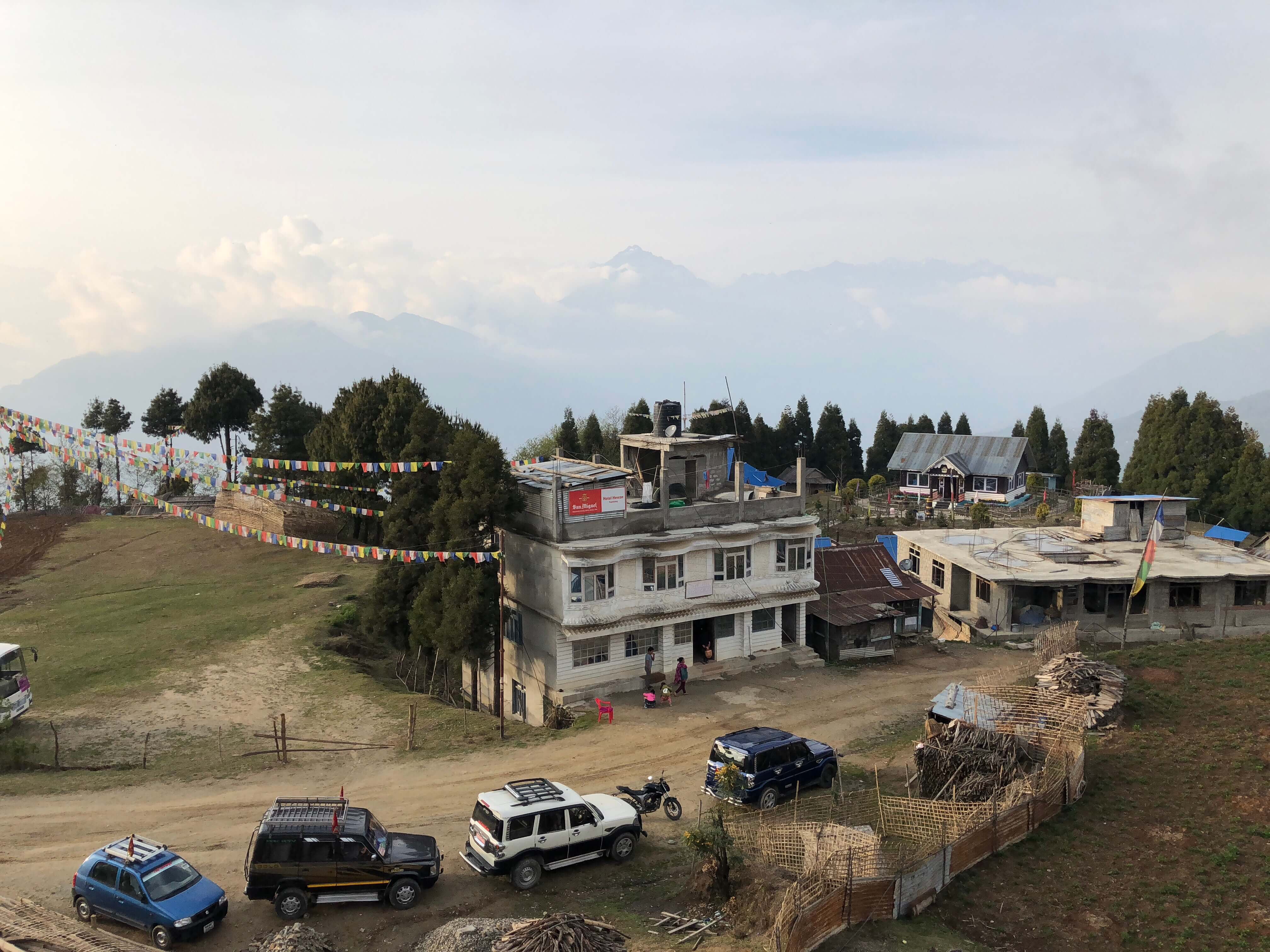