Day 10: As Pleasant As The GHT May Get

I slept wonderfully in my tent last night. Fortunately, temps were mild, and it was 50F/10C in my tent. I didn’t even need my ZPacks down booties that have been oh so heavenly on my feet each night. I was up plenty early for our 7:30am leave time. With the new tent, I feel like it will be awhile till I get an efficient routine down. The sun came over us the last 30mins before we set off, and we actually started without jackets on. We ended up leaving by 7:40am for anyone using this for gauging how long days take. We have a couple resources from previous hikers, and have found their daily time estimates to be very helpful. Know that our mileage’s are not from the book. It only gives time estimates. The distances are just from the tracks we’ve drawn on CalTopo. They are likely a good 10-20% below the actual distance, but that’s the best guesstimate we have.

We had sun on us most of the day, but it was a nice cool day. Just right for hiking. My muscle above my knee on my inner thigh was stiff, but not nearly as much of a hindrance as yesterday. It still has a ways to go to be normal again, but I am glad it’s improving. Today was basically walking along three different river valleys. As we started dropping down to an expected bridge crossing, we were in a very nice forest with many rhododendron. 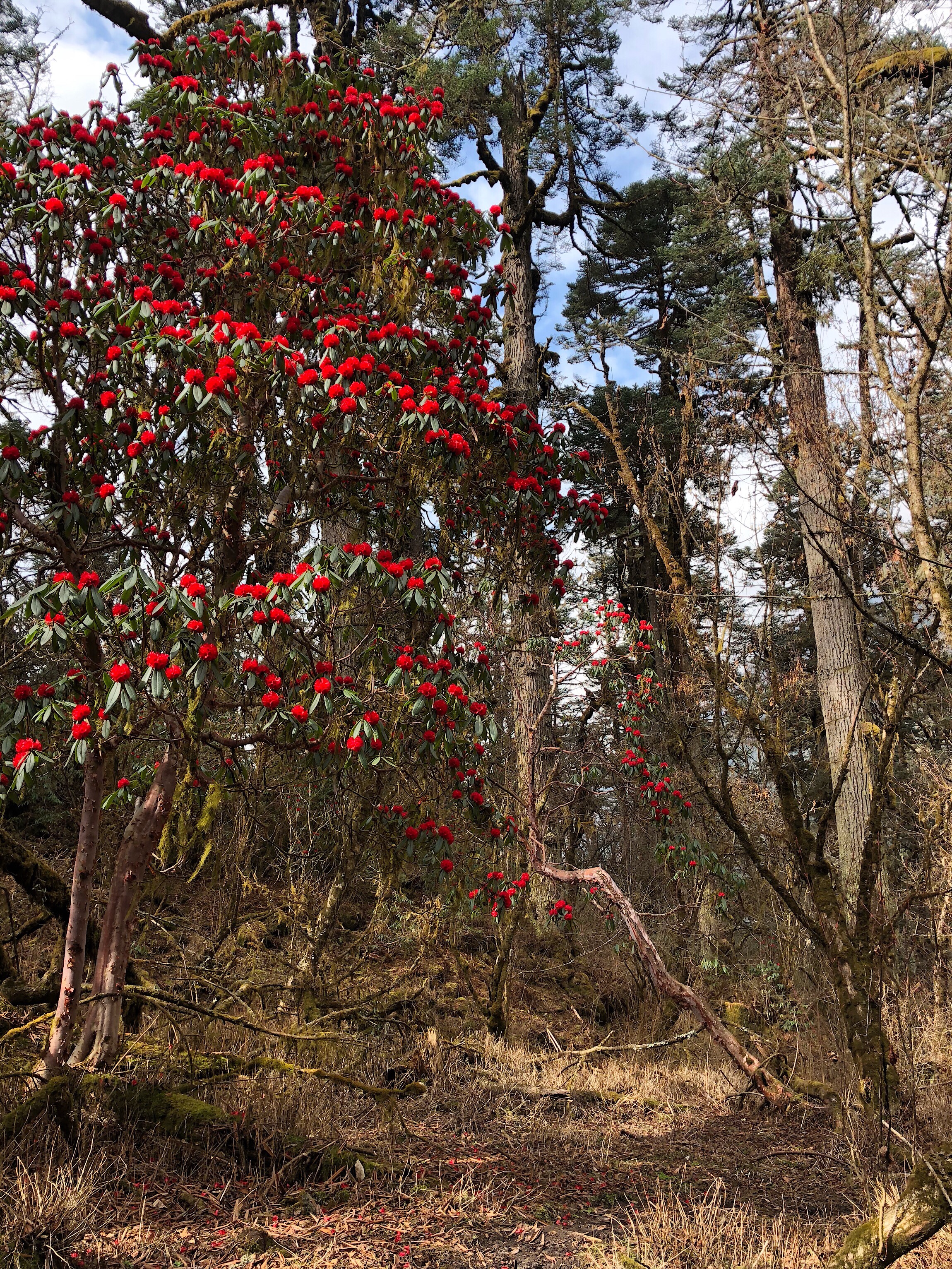 Looking at our mileage’s each day, people may wonder how we could possibly only do 8mi in a day. Well, the terrain is very rocky, and not the type of thing you can get a stride on. Here’s a good example of something we would commonly go up or down. I’ll add that right after this photo, Buck-30 slipped on the mossy rock right in front of him and hit his thigh pretty good, which he felt the rest of the day. I had two stumbles today, and thankfully didn’t hurt anything. 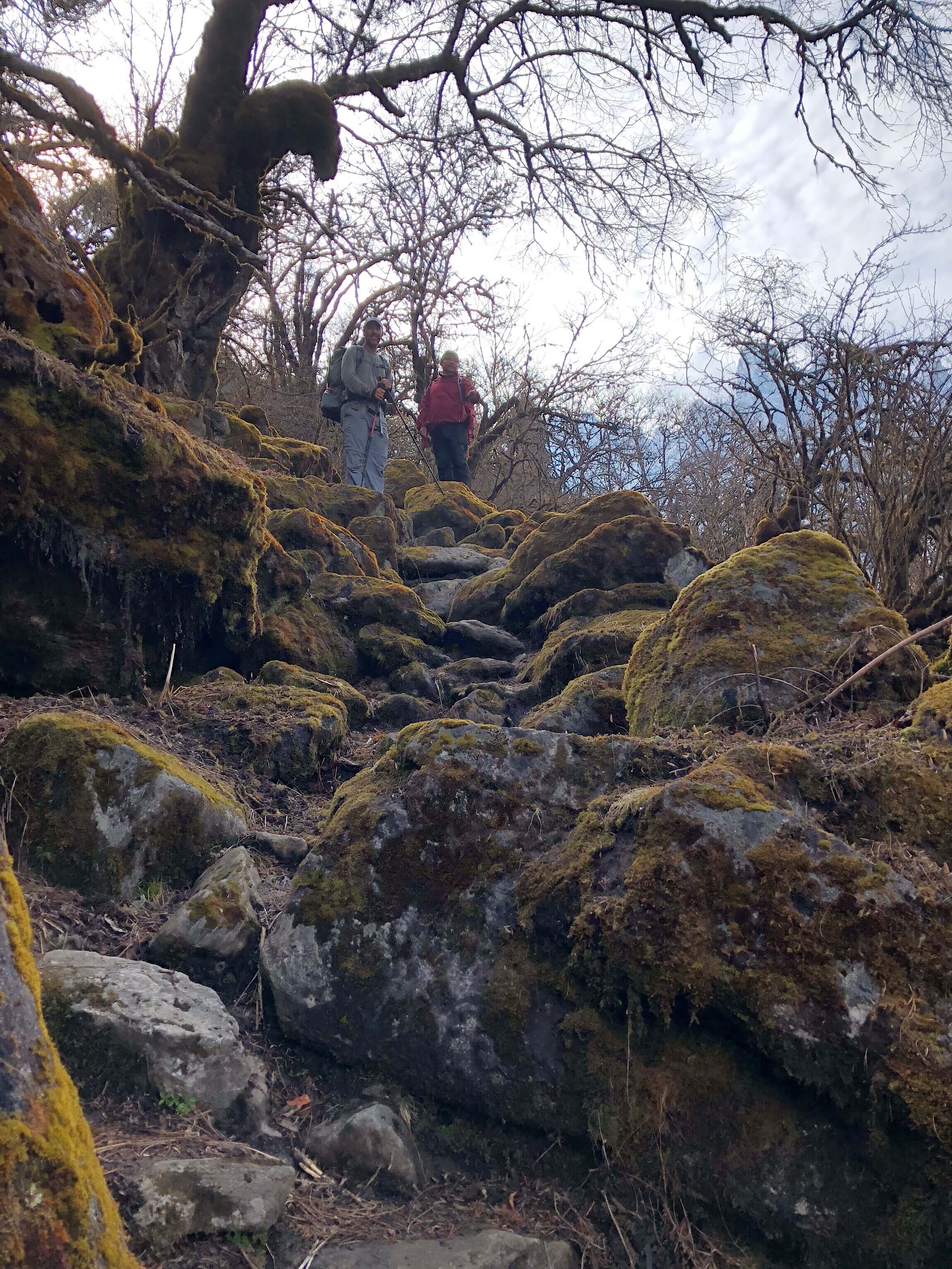 I commented that the trail we were on surprisingly looked like it had recently been worked on. This area is known for its trading routes to Tibet. We had not noticed a fork anywhere in the trail, but it also didn’t feel like it was doing what we thought we’d be doing. Buck-30 checked the GPS to find that we were not on the expected track, but were headed the right direction. Turns out, it was a new blue blazed trail that saved us a good 3/4 of a mile, which is a lot out here. Here’s a photo of what the track should have been, and a black arrow showing what we ended up doing. 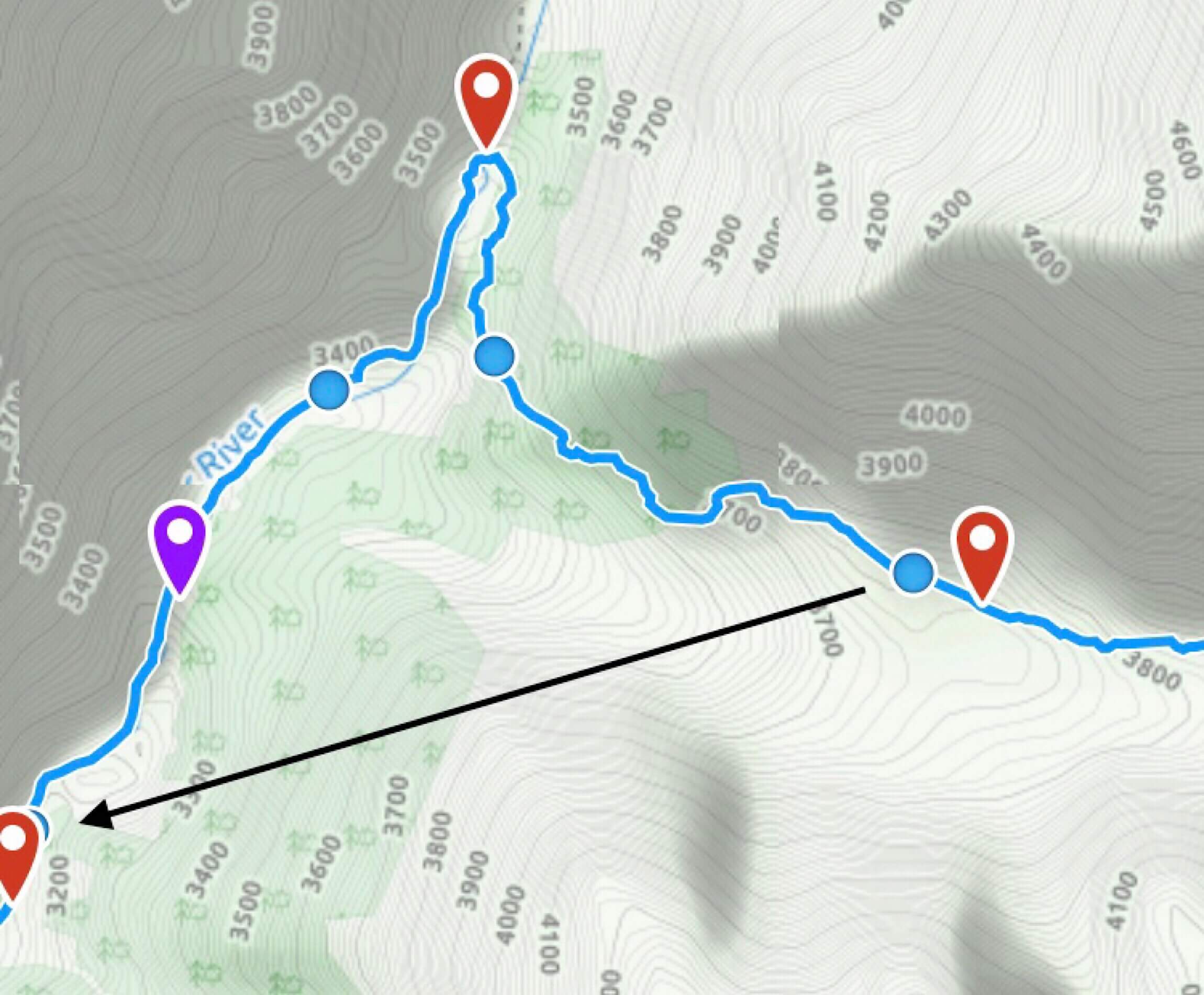 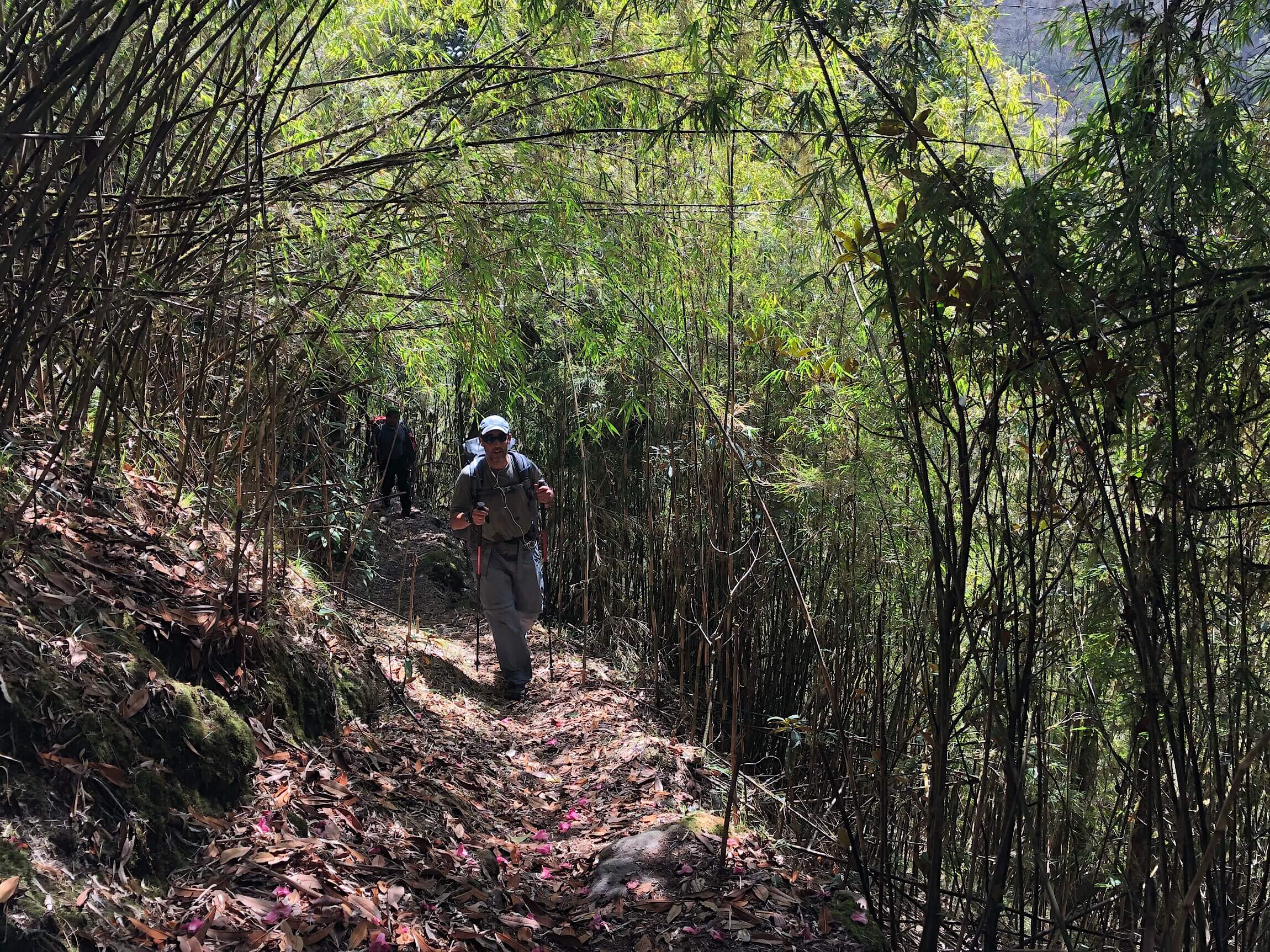 The guidebook warned of many short ups and downs, and they weren’t kidding. There were more the latter part of the day, but it’s impossible to explain the amount of elevation we do in a day with the undulating terrain. Someday someone may do a more exact track with stats, but it’s a lot. 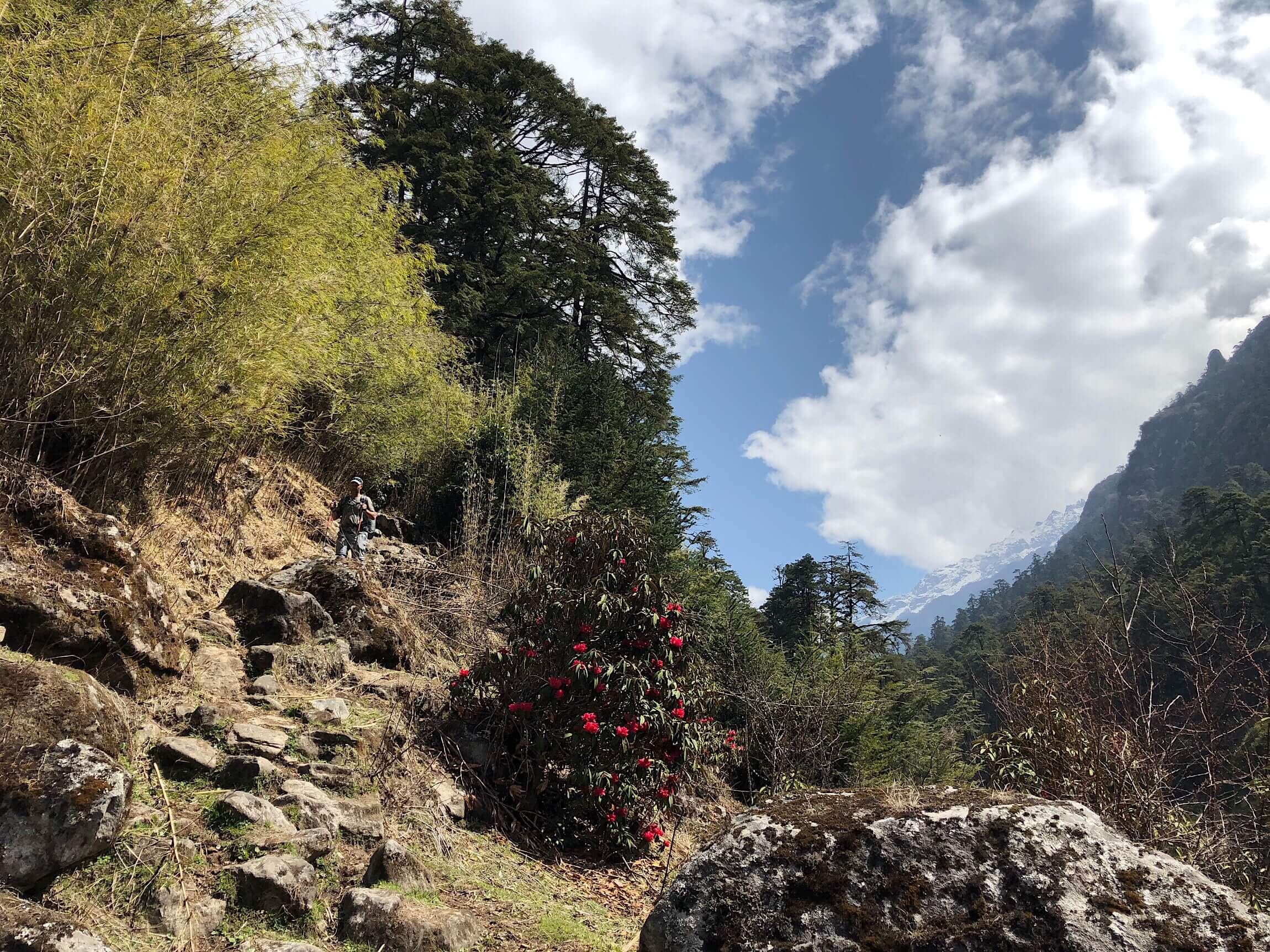 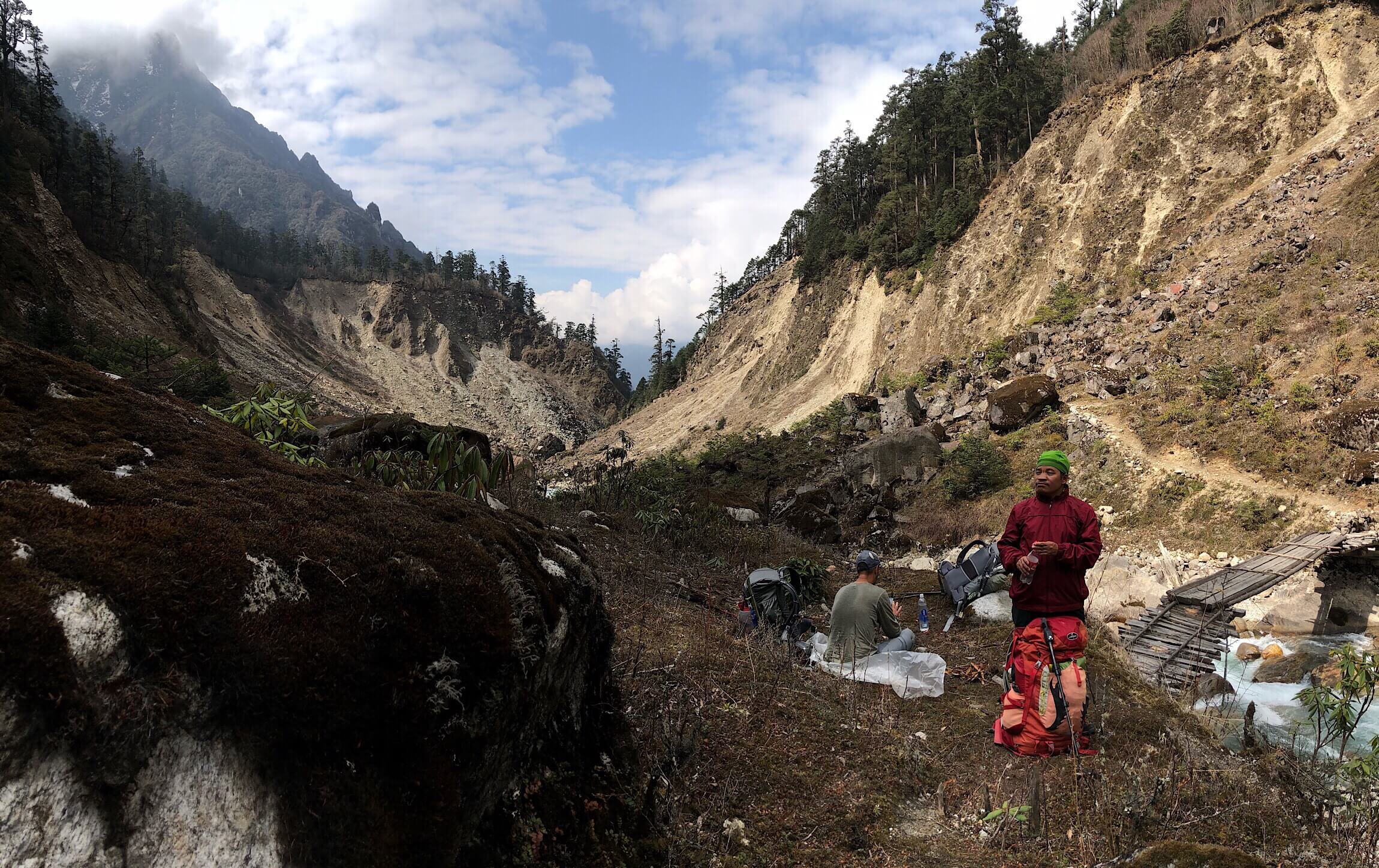 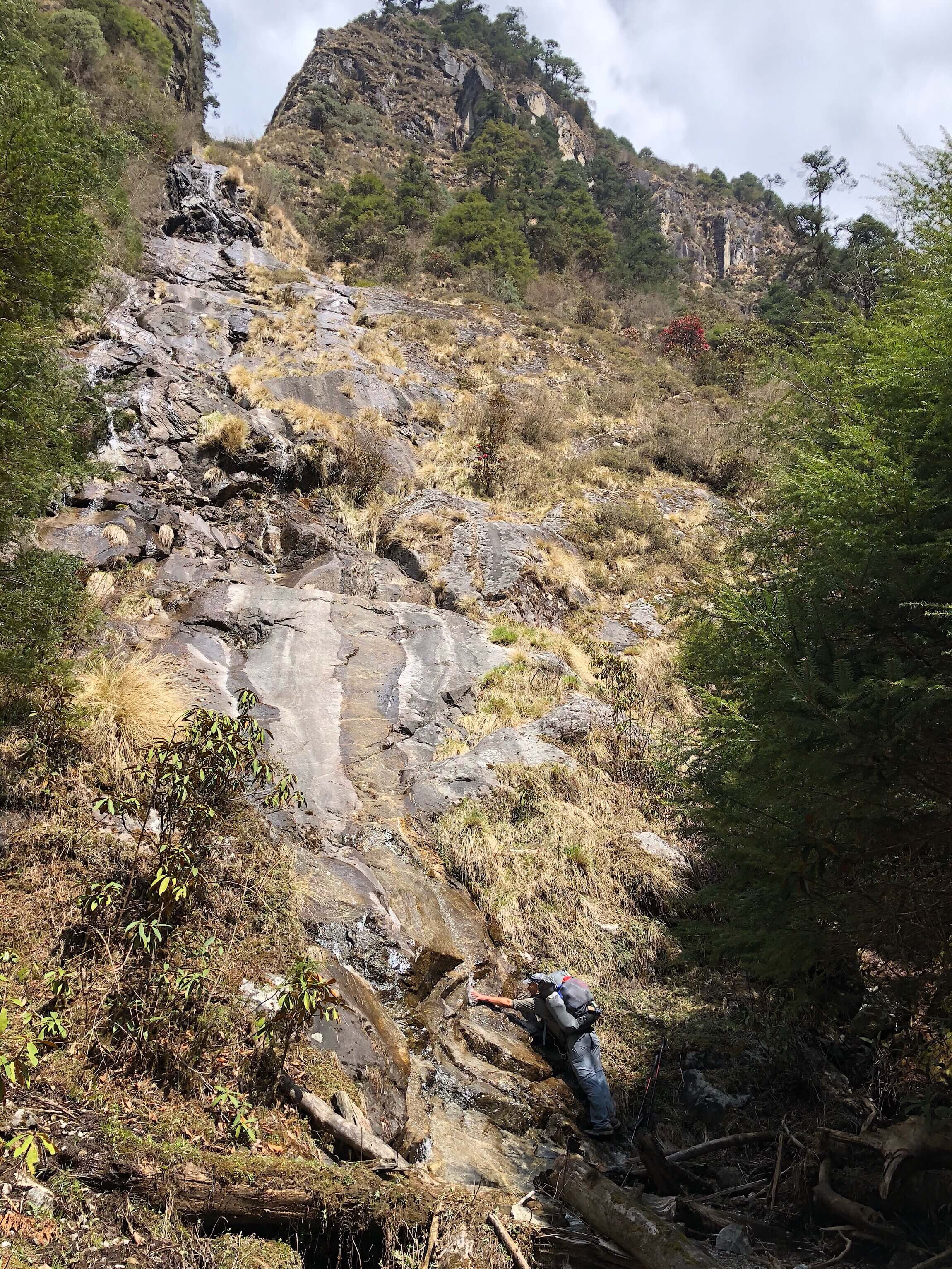 Although tiring, the day really was as pleasant as the GHT could possibly get. We knew we would stop early because it lines us up for a pass that we will be going over in two days, so we took our time and just enjoyed the day. We took a lunch break early, at 10:30am. We were hungry, it was a nice spot, and we figured we’d take advantage of the sun for drying things out and using solar chargers. All day, we had some really great scenery of the river valley and waterfalls across the river. We got a good one at our lunch break as well. 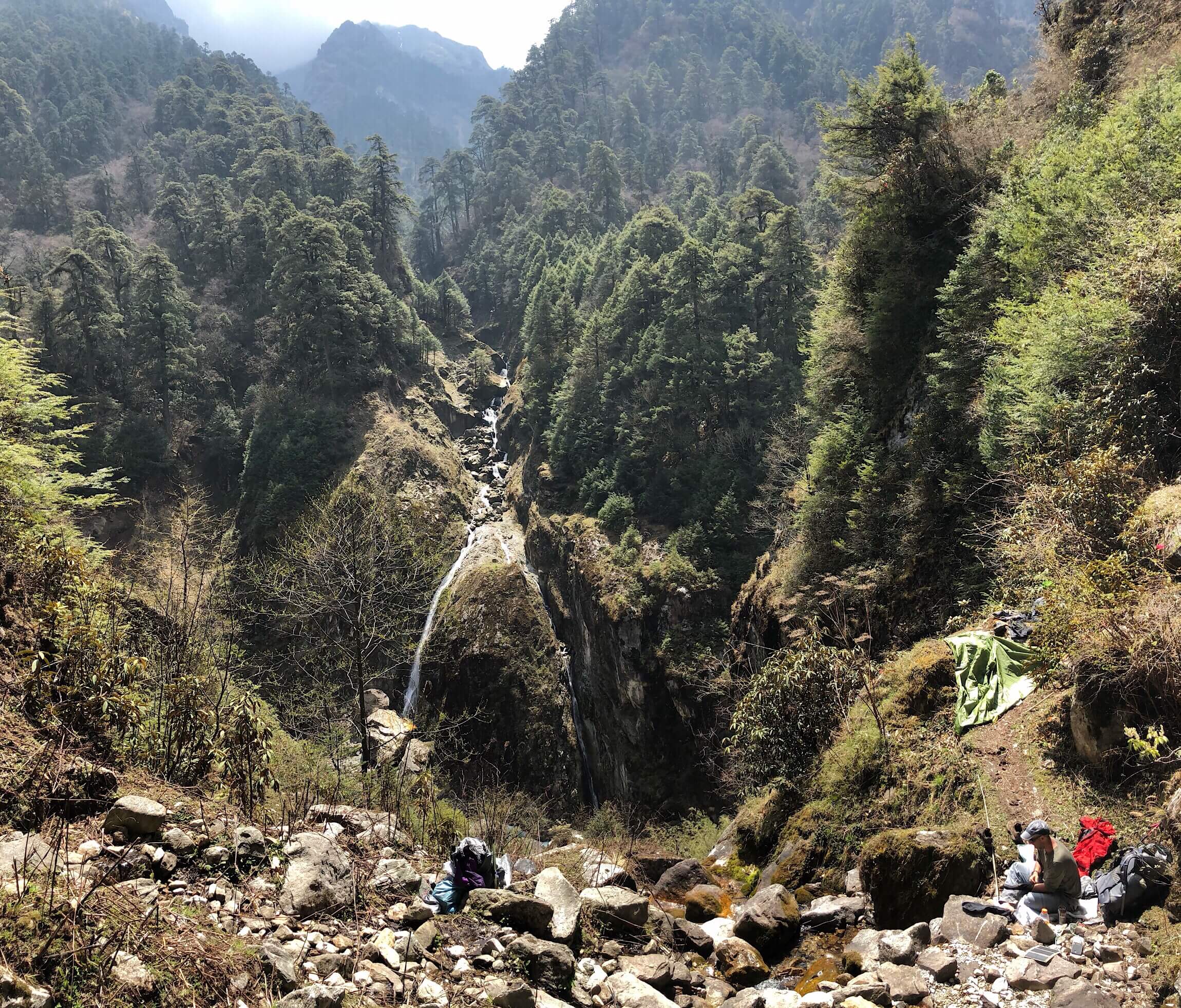 Scoring quite the lunch spot.

Good thing we took lunch early, because the steep ups and downs really kicked in after that. We even had yaks on the trail, and one we had to hike behind for a good 10mins because there was nowhere else for him to go. We’ve been seeing mostly hybrids of yaks with cows or ox, but were told the ones we saw today were yaks. They are quite pretty actually. 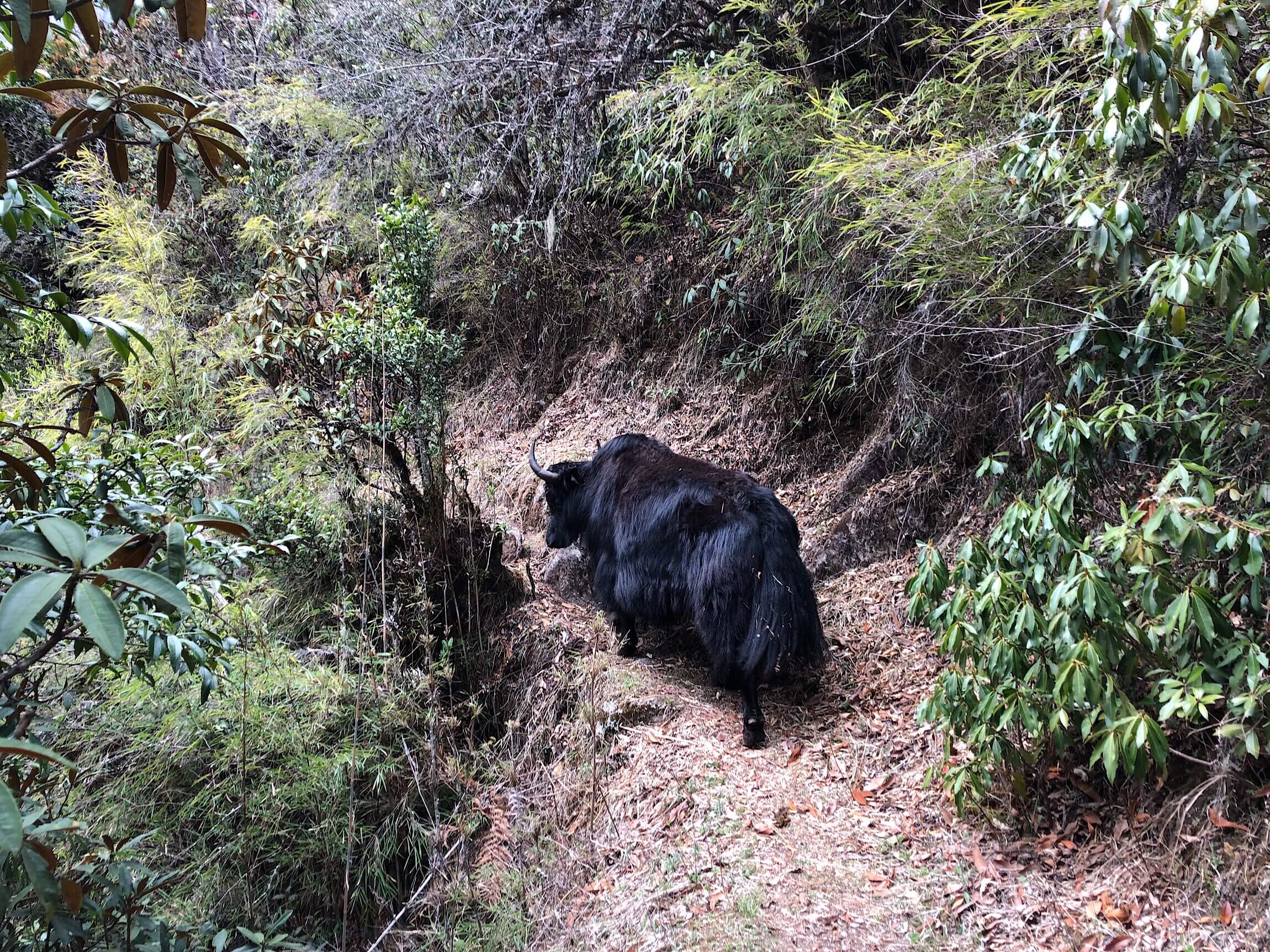 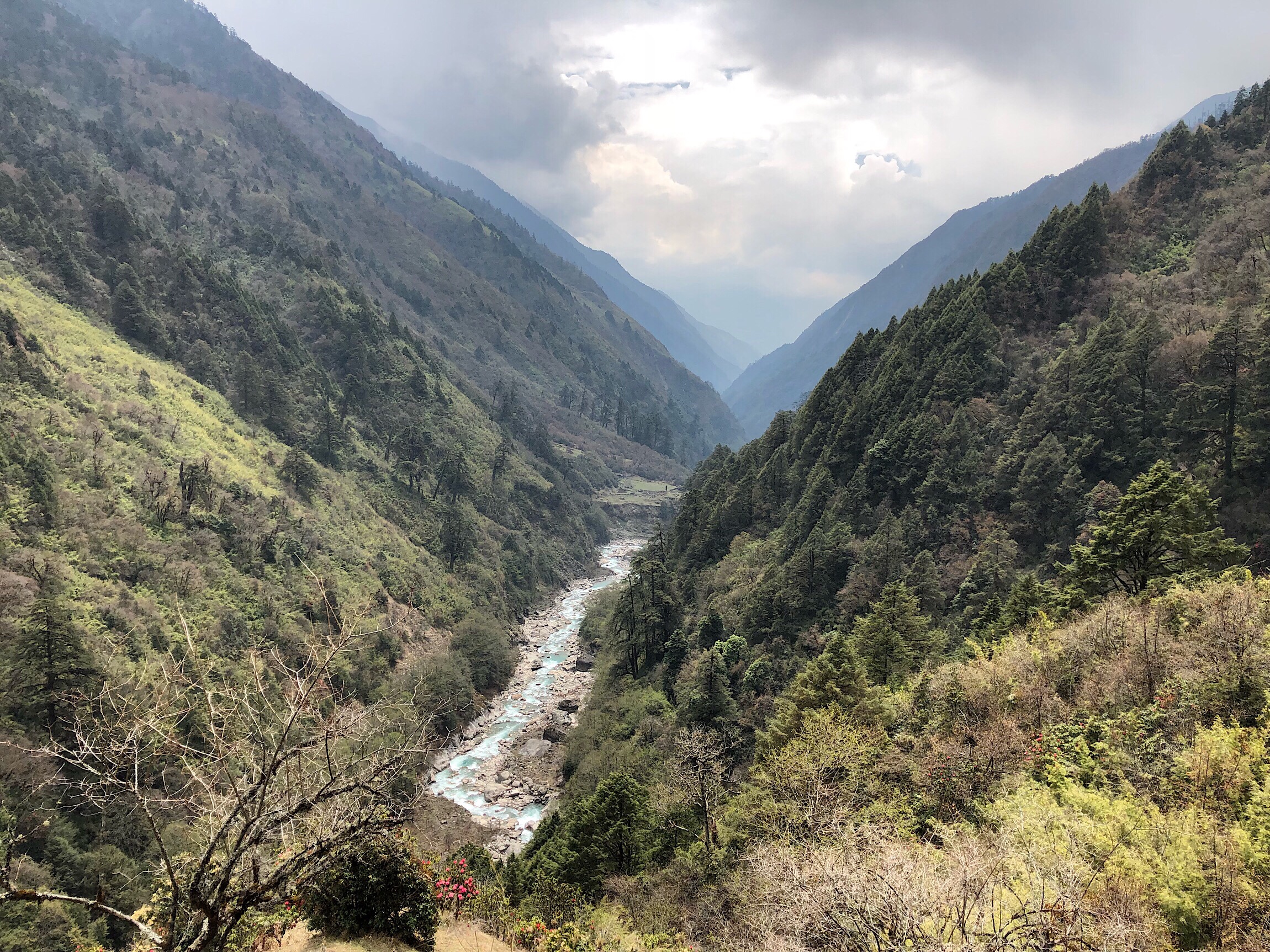 We have been waking a bit early on these shorter hiking days to hopefully dodge the daily rain that seems to come anytime after noon. Yep, today the rain started just as we were approaching our village destination for the day, Olangchun Gola. We walked into the village just as the rain came down steadily, and once again were safe under a tin roof as the rain really came down for the afternoon. 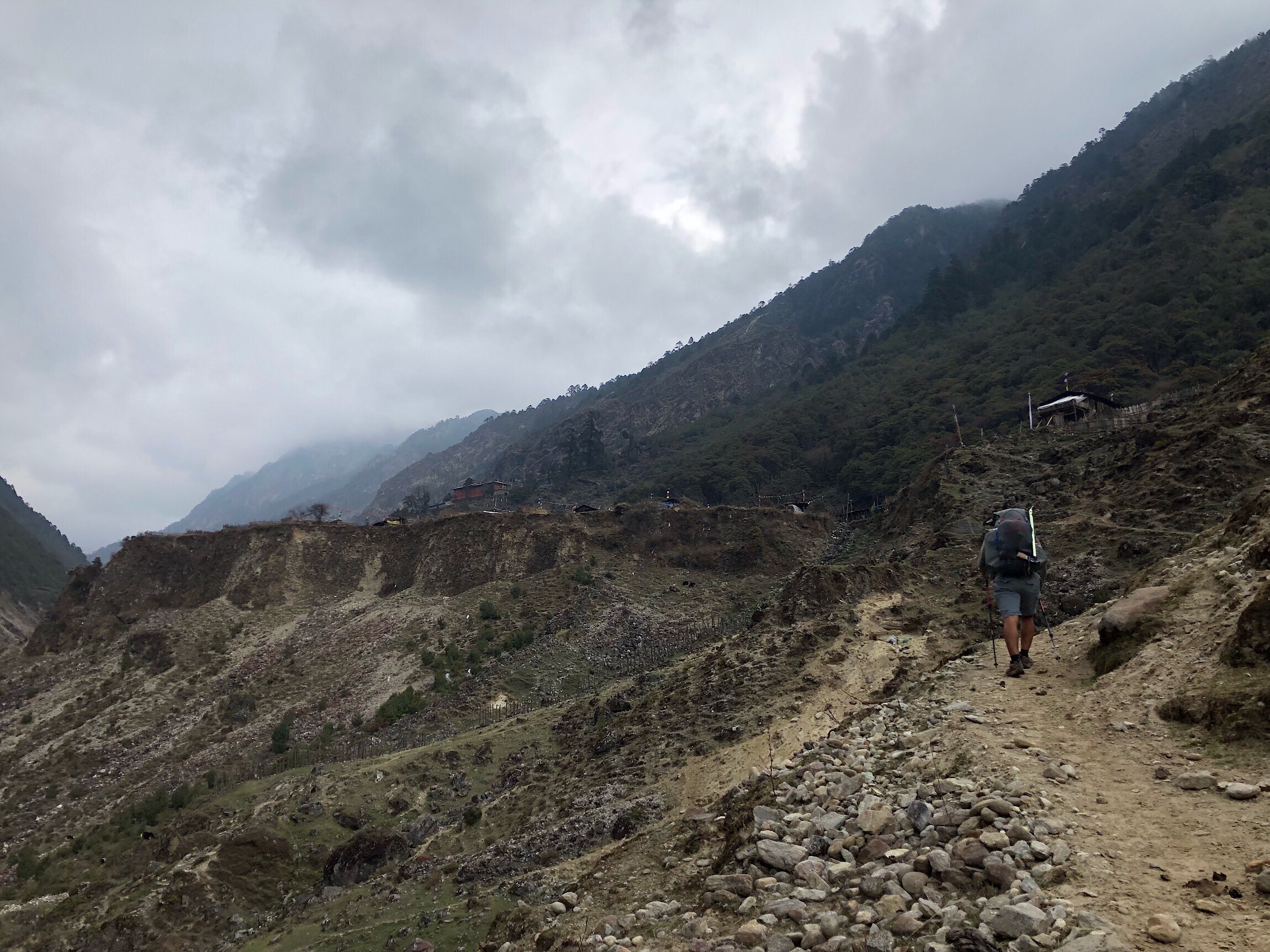 Getting there just as the rain comes down. 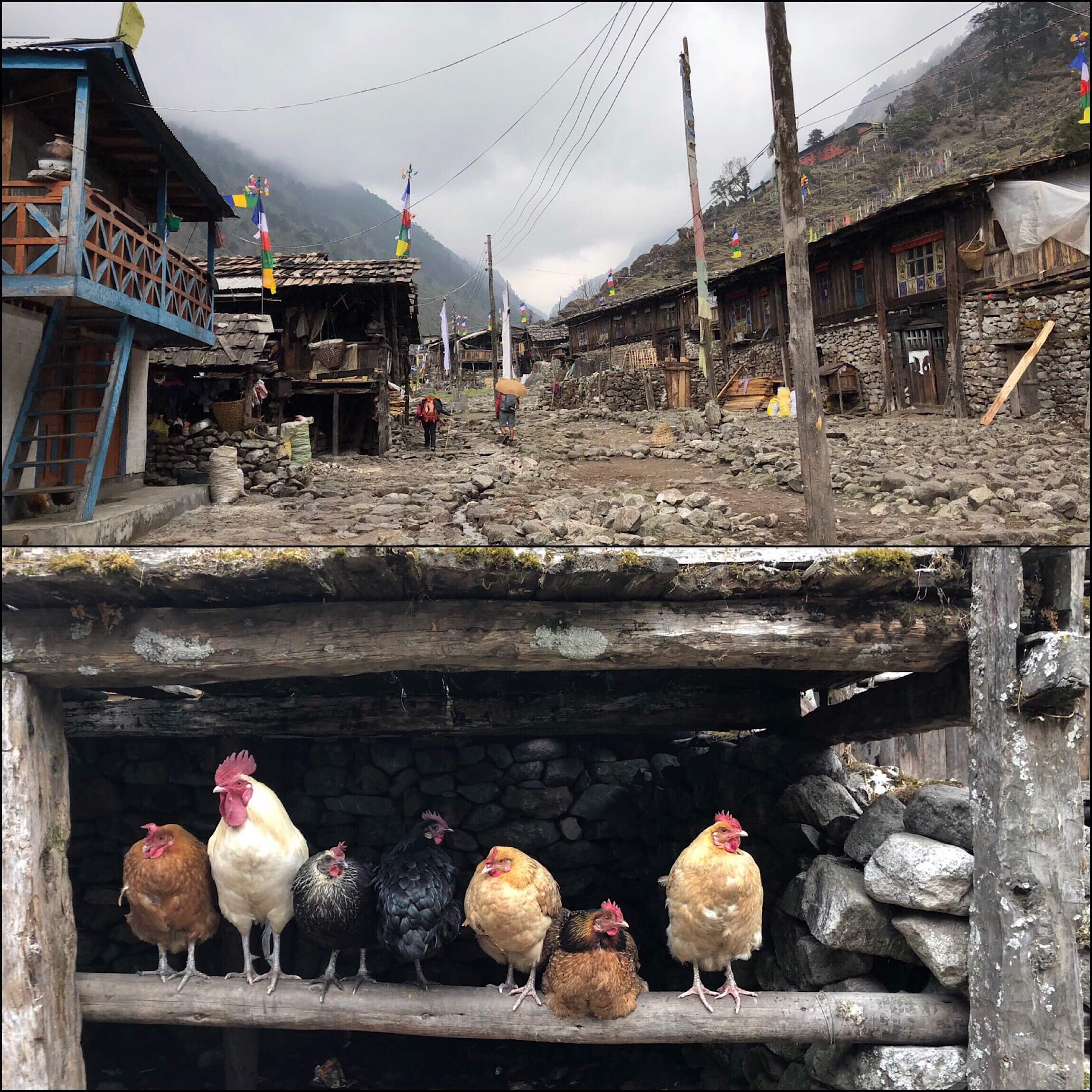 We chose a guesthouse that was quite new looking and very nice. It didn’t have a name, but was on the furthest end of the village and just below the 465yr old monastery that sits above the village. It’s a newer building with a lavender second floor with a railing and a blue roof. It’s $3/night, but has no menu to show food prices. We may have quite the food bill ahead of us tomorrow morning… 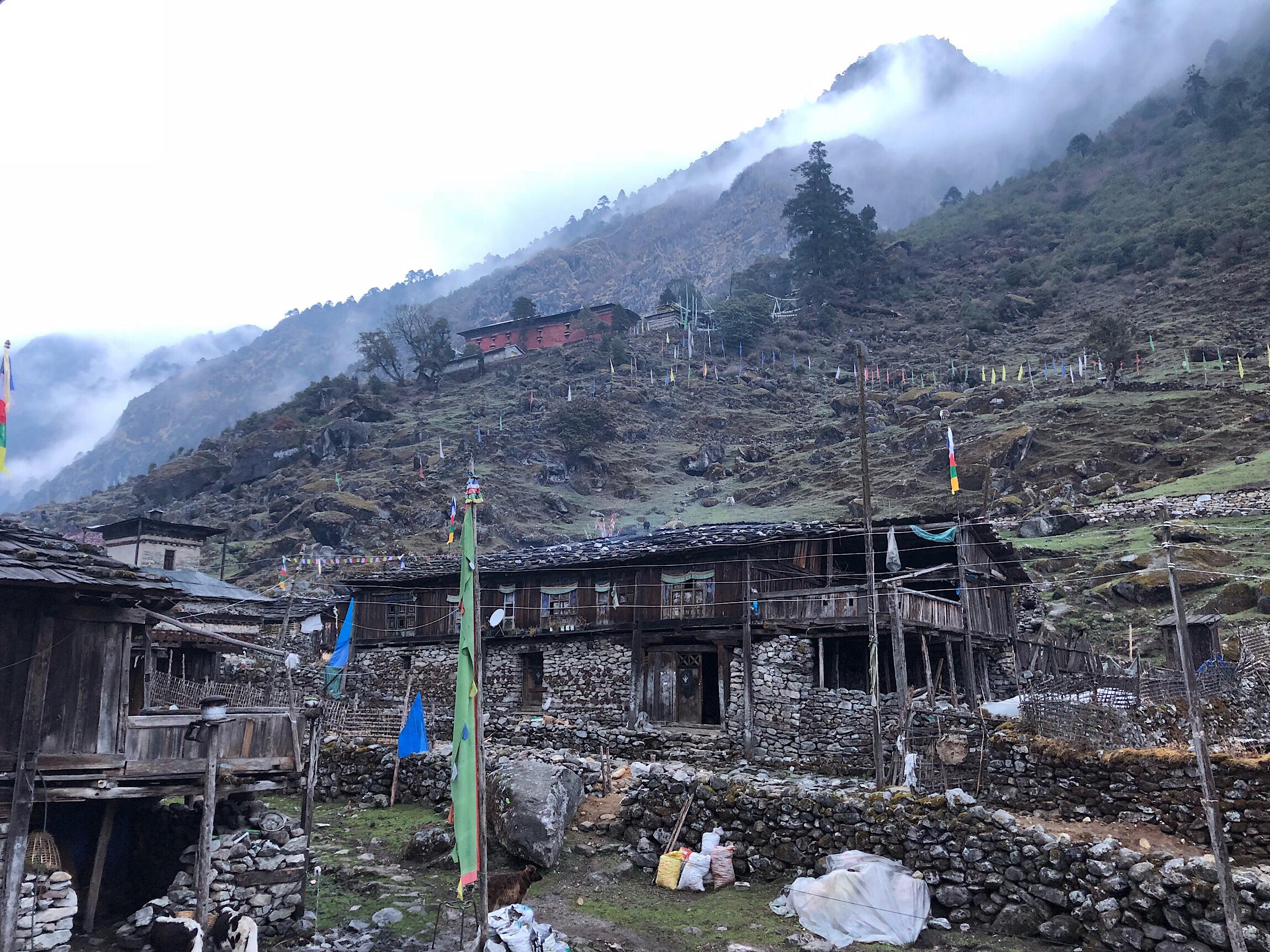 View from our guest house with the 467yr old monastery high above.

The guidebook said this village would be much more familiar with westerners given that a lot of trade runs through it. The owners here knew quite a bit of English and the children did as well. Both their daughters, 9 and 14, each go to schooling either in another village or in Kathmandu, where they live in a hostel for half the year non-consecutively. Buck-30 and I have similar particular eating habits, so we’ve found that splitting meals works well for us. We like a bit of variety, so a common favorite is to get an order of veggie fried rice and an order of veggie mo mos. Yes, we eat it, but we both know we’d eat a ton more if we had our personal favorites back home in front of us. 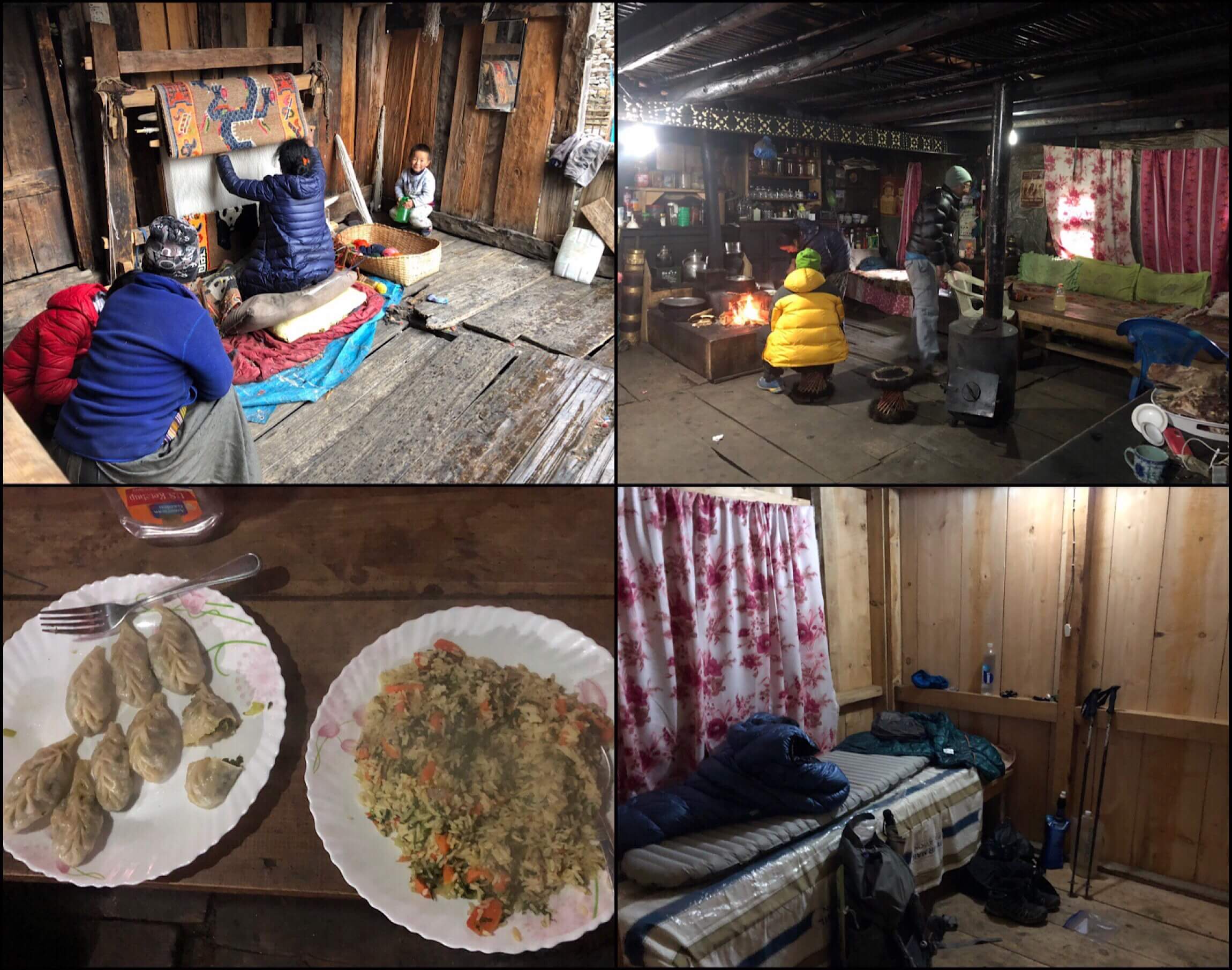 The other surprise was that the village has electricity. We have little info on this stretch, and were under the impression it likely wouldn’t have anything for charging. We have 2wks until our first real town with hotels, and are just gambling on being able to charge every so often in teahouses or just using our solar charges. We are somewhat conserving, but betting we will find ways to charge.

A funny story is that the three of us are in neighboring rooms, and I’m in the middle with shared walks with both Buck-30 and Kishor. We’ve yet to be in a place where you can’t just talk through the walls because they are just thin boards, but it’s nice to have our own rooms. Also, I’ll mention no one else has been staying at these places all but one night so far. It’s great to have it to ourselves. Anyway, before dinner, we heard Kishor snoring, which he hadn’t done before. We couldn’t believe it cause it was fairly loud and we are both light sleepers. When it was time for dinner, I banged hard on Kishor’s wall and he just wouldn’t wake up, so we gave up and headed downstairs. There was a yak in the front yard, and Buck-30 noticed it was what was making the snoring sound! It totally sounds like someone snoring! It was pretty funny that I had just kept banging on Kishor’s wall in disbelief that he just kept snoring, ha.

We also found out that the two Swiss men ahead of us doing half the GHT that we heard about stayed here and are about two days ahead of us. They have a team of 7 that includes a cook, a guide, three porters, and the two of them. That’s why they left such good footprints for us going over Nango La Pass yesterday. We are hoping for the same thing when we head over the more challenging Lumbha Sambha in a couple days.

Ok, up early tomorrow. We say farewell to Kishor tomorrow morning once through a checkpoint, and then have a 4,000ft/1219m climb to camp high and position us well for a pass the next day that will take us over 17,000ft/5181m for the first time this hike.