I woke this morning to Buck-30 asking me why I wasn’t packing up yet. Somehow, I thought we were leaving at 6:30am, not 6am. At least he asked before he packed up, cause I take longer to pack up. It snowed on and off through the night, and was for sure below freezing. We both had successful nights in our tents and stayed cozy. The not so fun part was packing up in the cold this morning. At least the snow on the tents was frozen, so it was easy to get most of it brushed off before packing away our tents. We were thankful to have blue sky to start the morning for our big hurdle of Lumbha Sambha Pass at 16,926ft/5159m, our highest point yet. 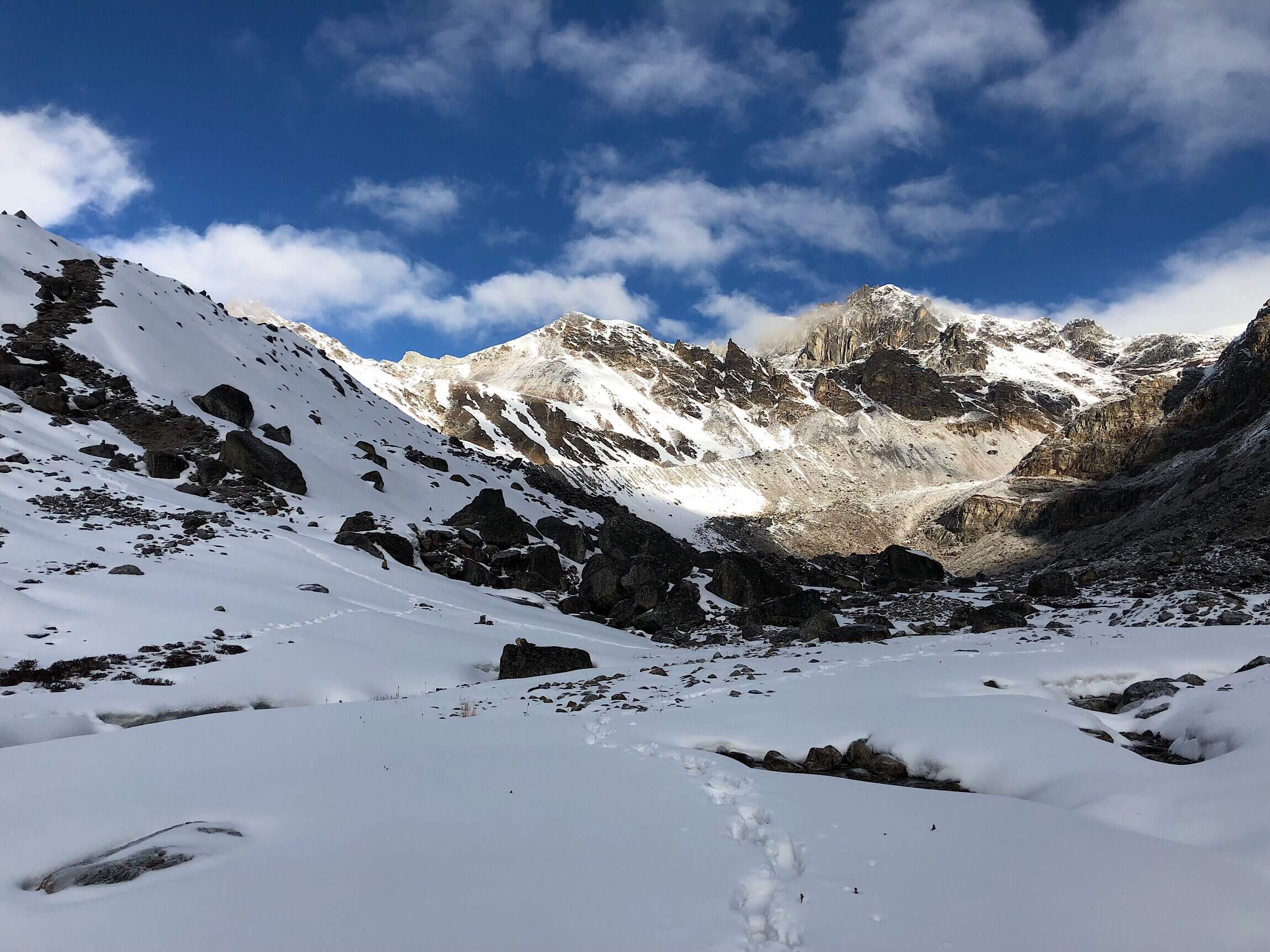 Footprints to lead the way.

We knew we wanted to get an early start to hopefully get over the pass before the afternoon gloom set in. We also had hope that there would be less post-holing if the snow was still frozen early in the morning. Soon after camp, we came to a very steep climb in the snow that would start the real climb up to the pass. Any uphill grade at over 15,000ft/4600m put us both in sloth mode. It’s incredible how tiring it is to just take a few steps up a steep slope. We were going uphill in some form for the first 2-3hrs of the day. We both use Diamox, and it has worked well for each of us. Yes, it is a diuretic, but we’ve managed it, and the only side effect we’ve each had is tingling randomly on the extremities. No nausea, headaches, or struggled breath. Still though, up that high, going uphill is very slow going with legs that just don’t want to lift. 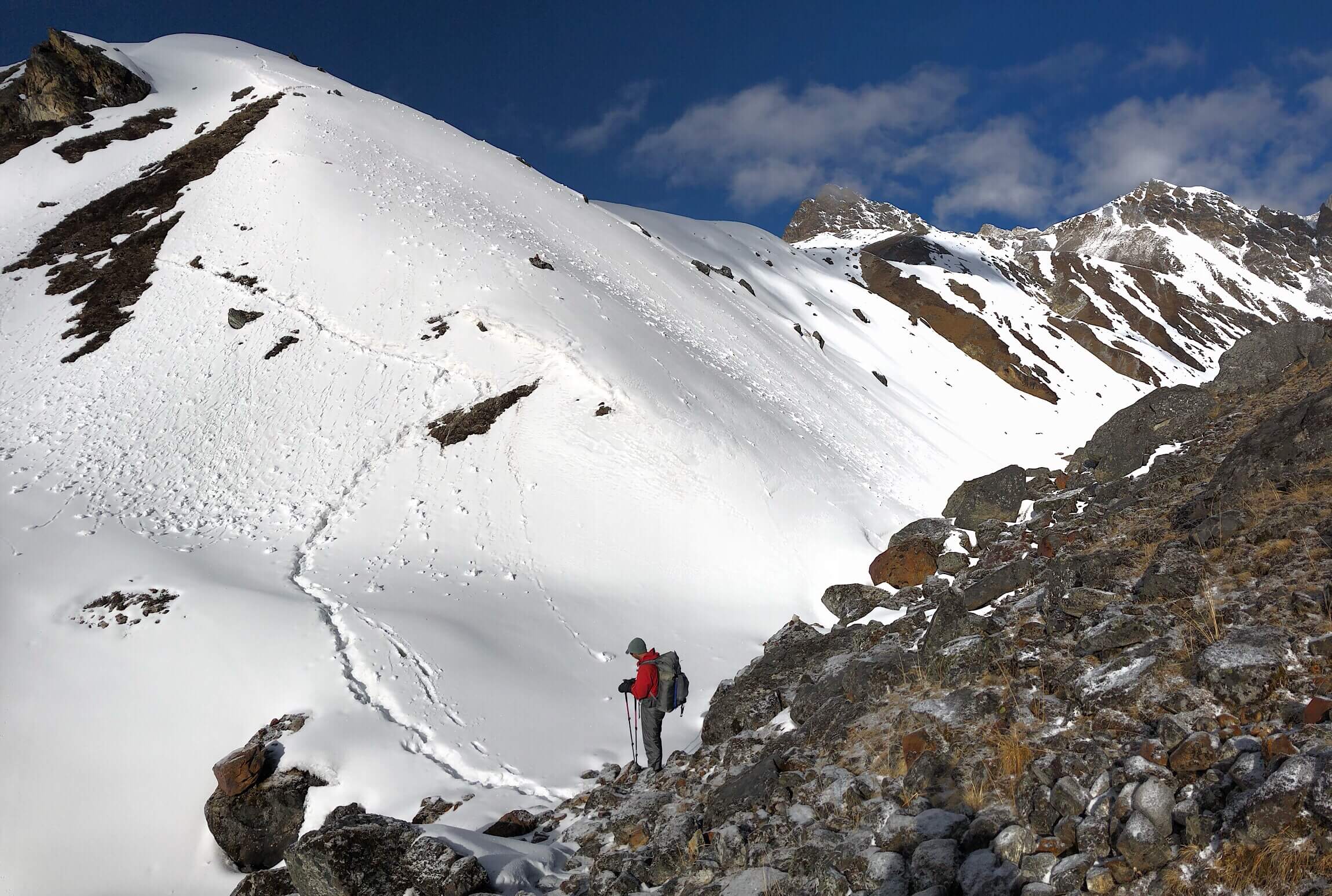 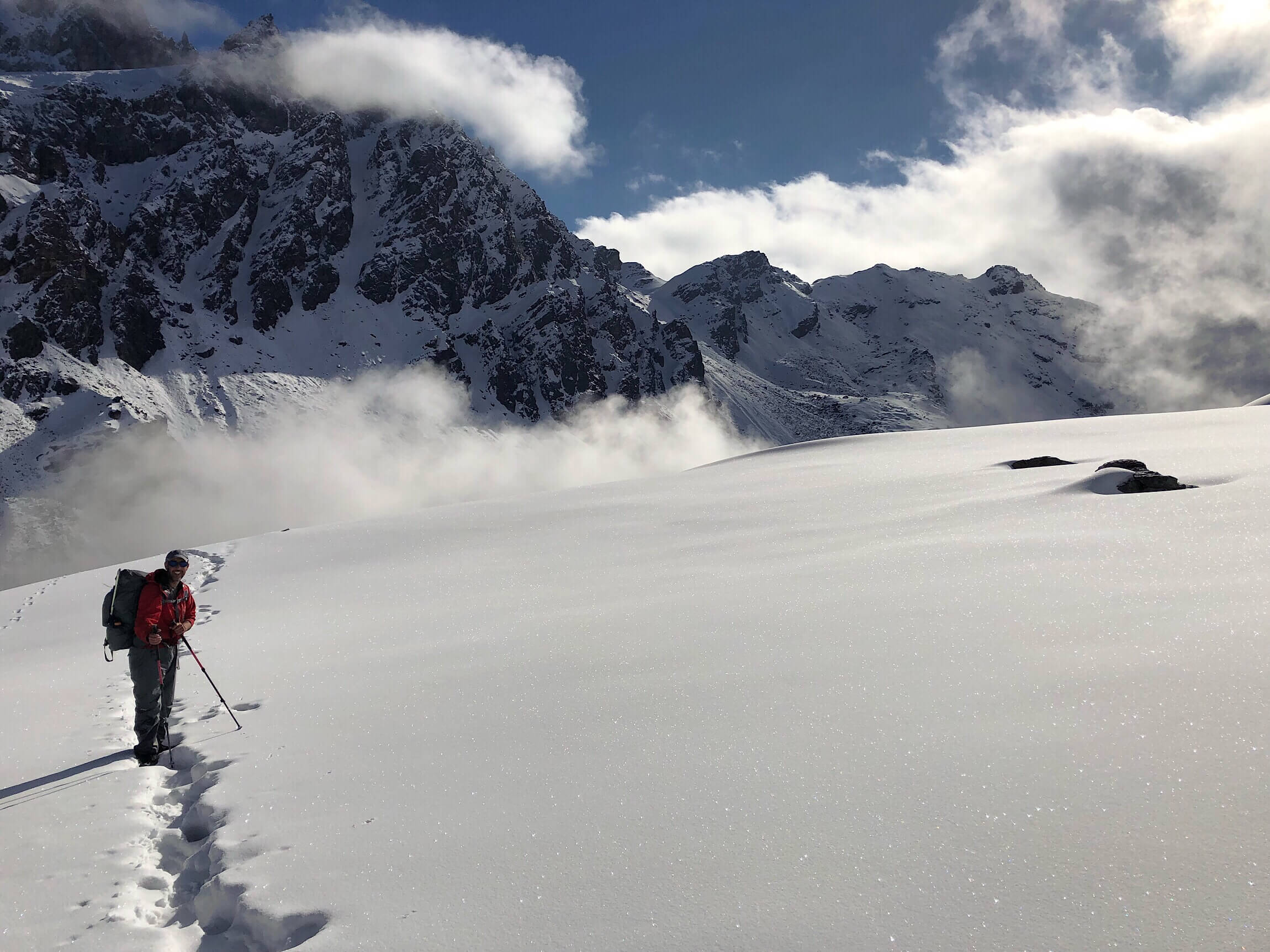 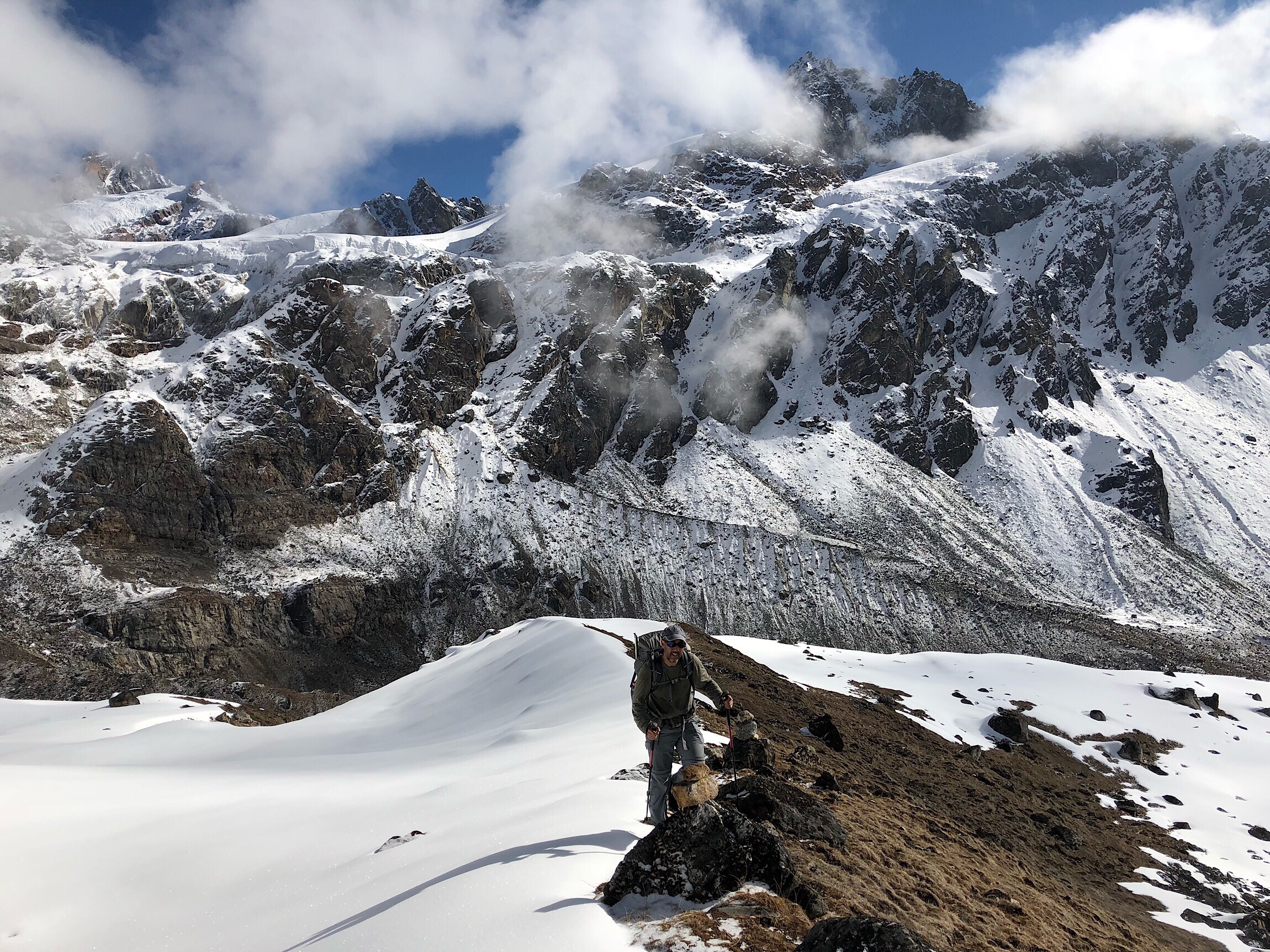 There were steep moments from time to time, but most of the climb was thankfully gradual. We also lucked out big time that the snow was frozen, and 90% of the time, we were able to walk on top of it, with little sinking down. When we did posthole, it was easily thigh deep, and likely deeper if we had gone through when it was softened. We had been told it could be waist deep at times. We had a GPS track from a friend that did this pass last year, that was very helpful (thank you David!). There were also good footprints to follow from the group ahead of us and a man we met yesterday going the opposite direction who seemed to be a guide or someone involved in the area. Still, with all that, it took us about a mile per hour factoring in minimal breaks. 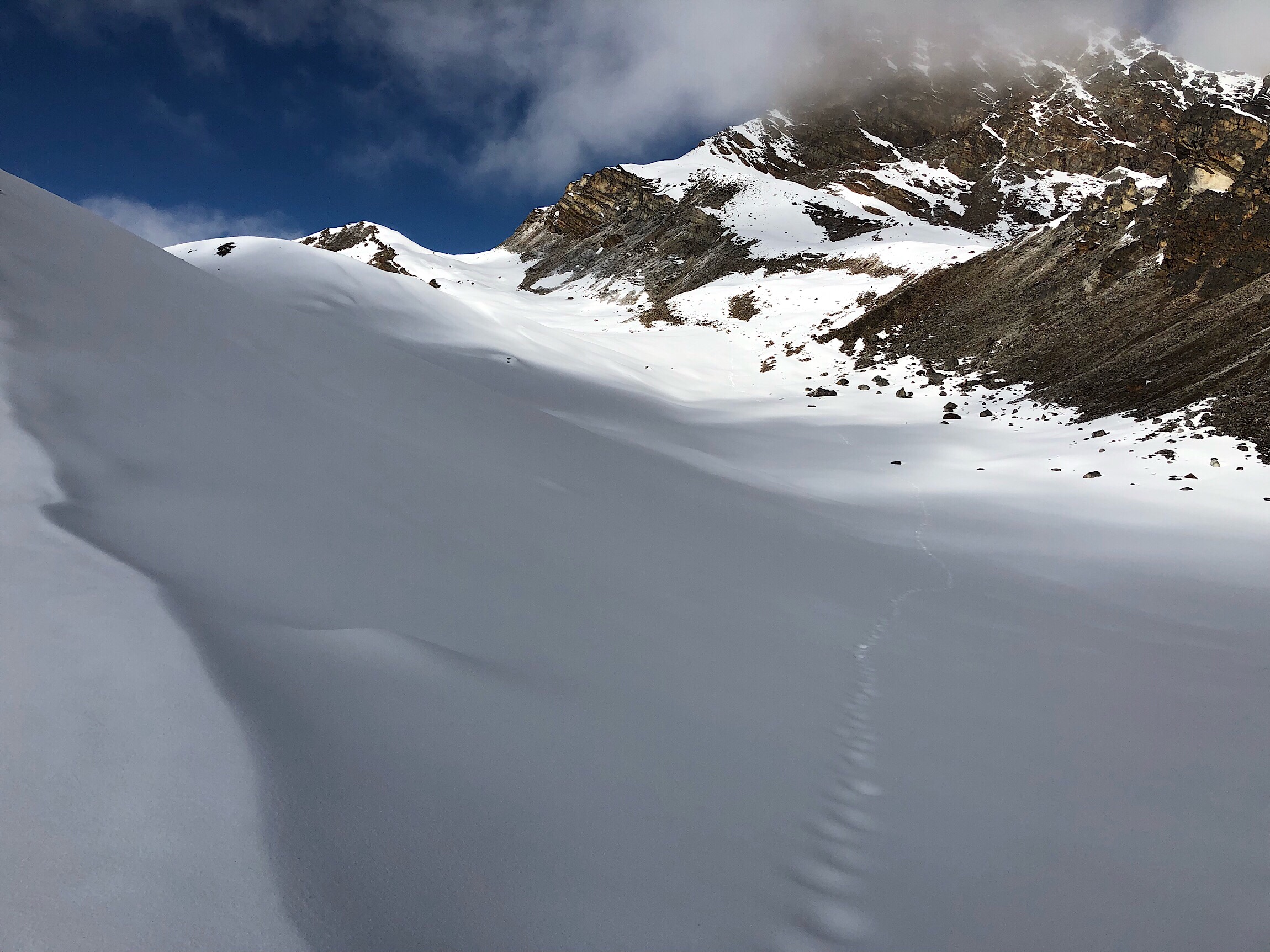 There are two passes with a ridge walk between the two. It was great that we got over just before the dense fog set in for the day. Wahoo! Our highest point yet, 16,926ft/5159m. We were moving slow, but surprised we didn’t feel the elevation more. 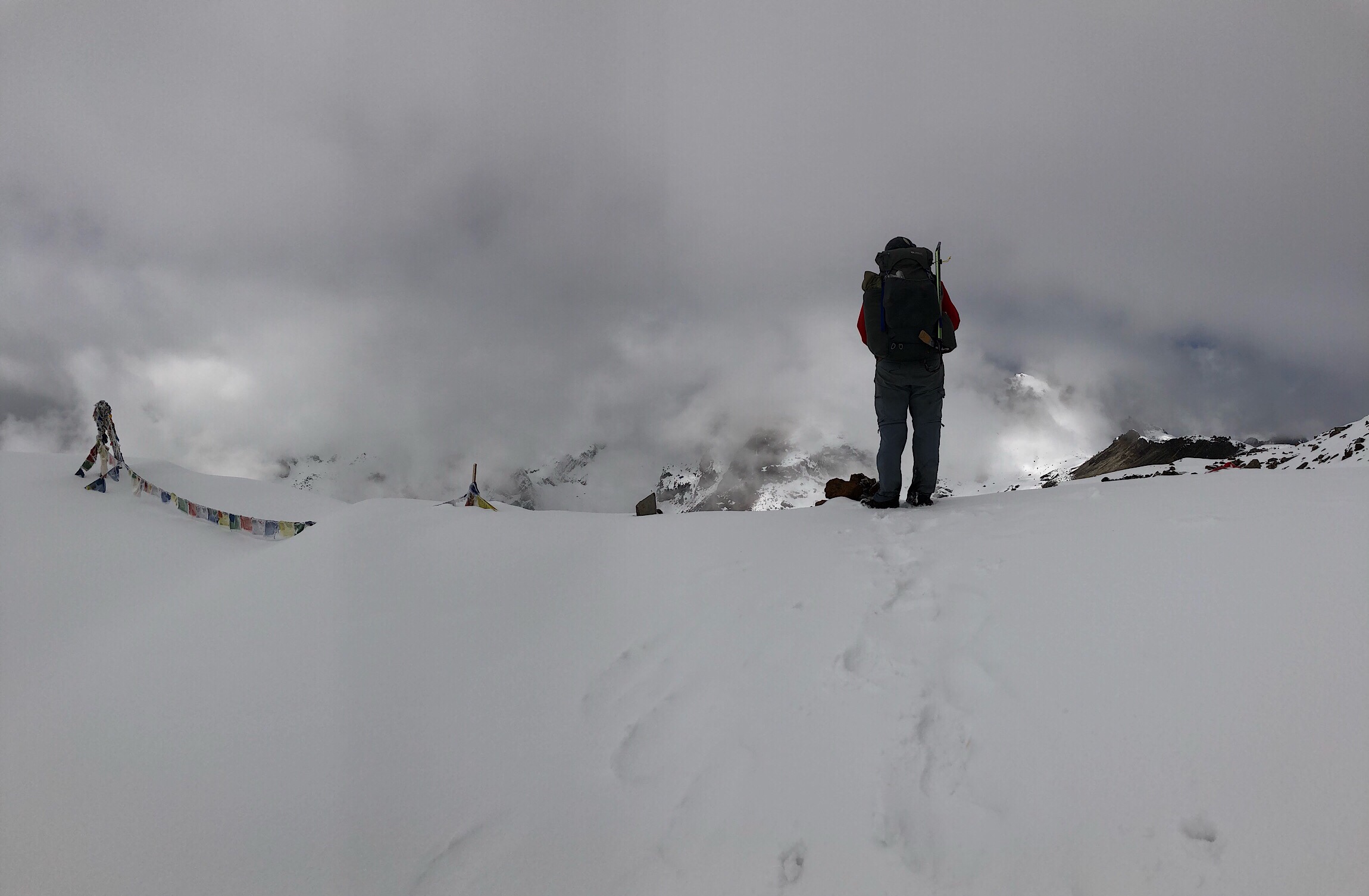 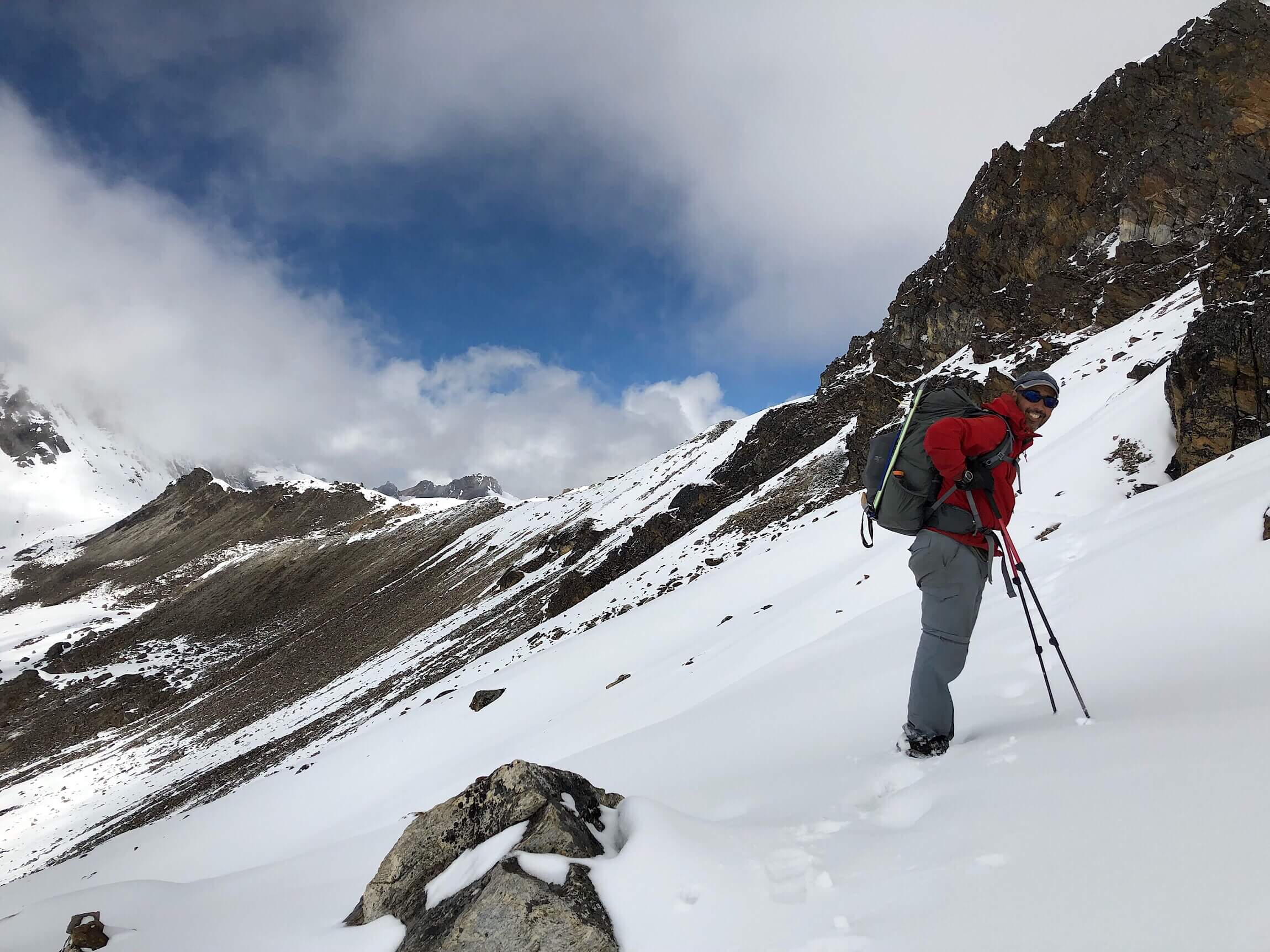 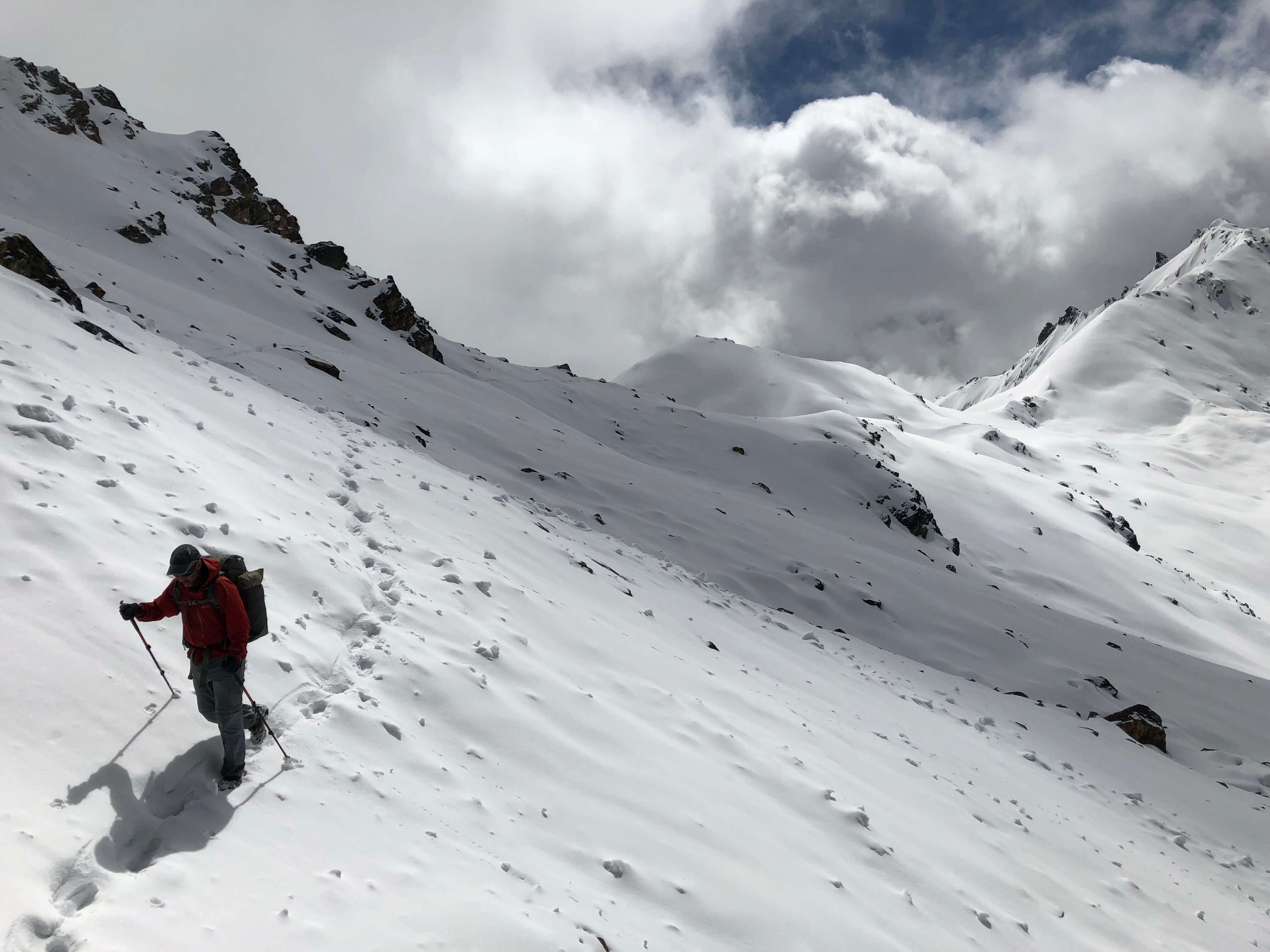 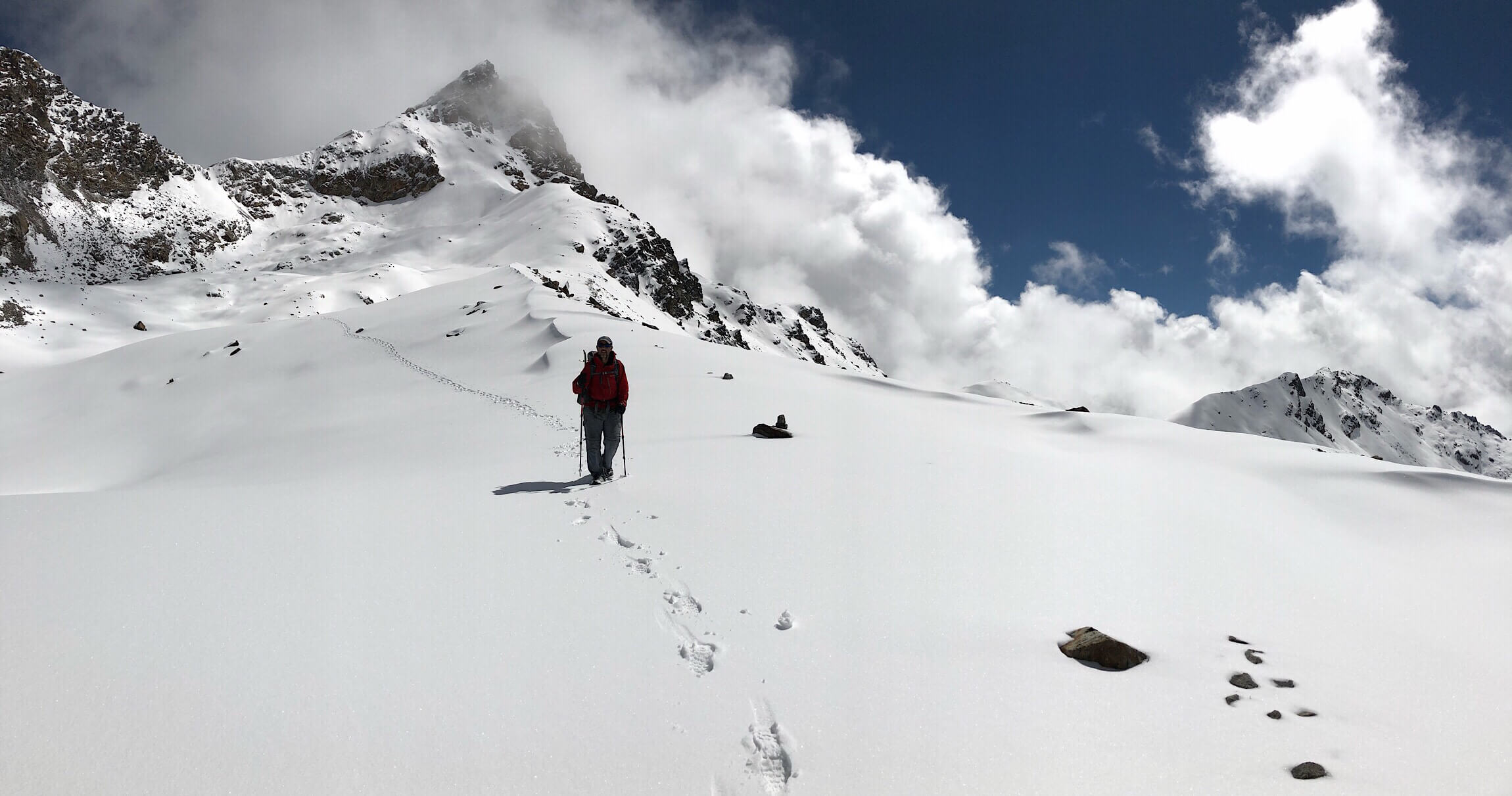 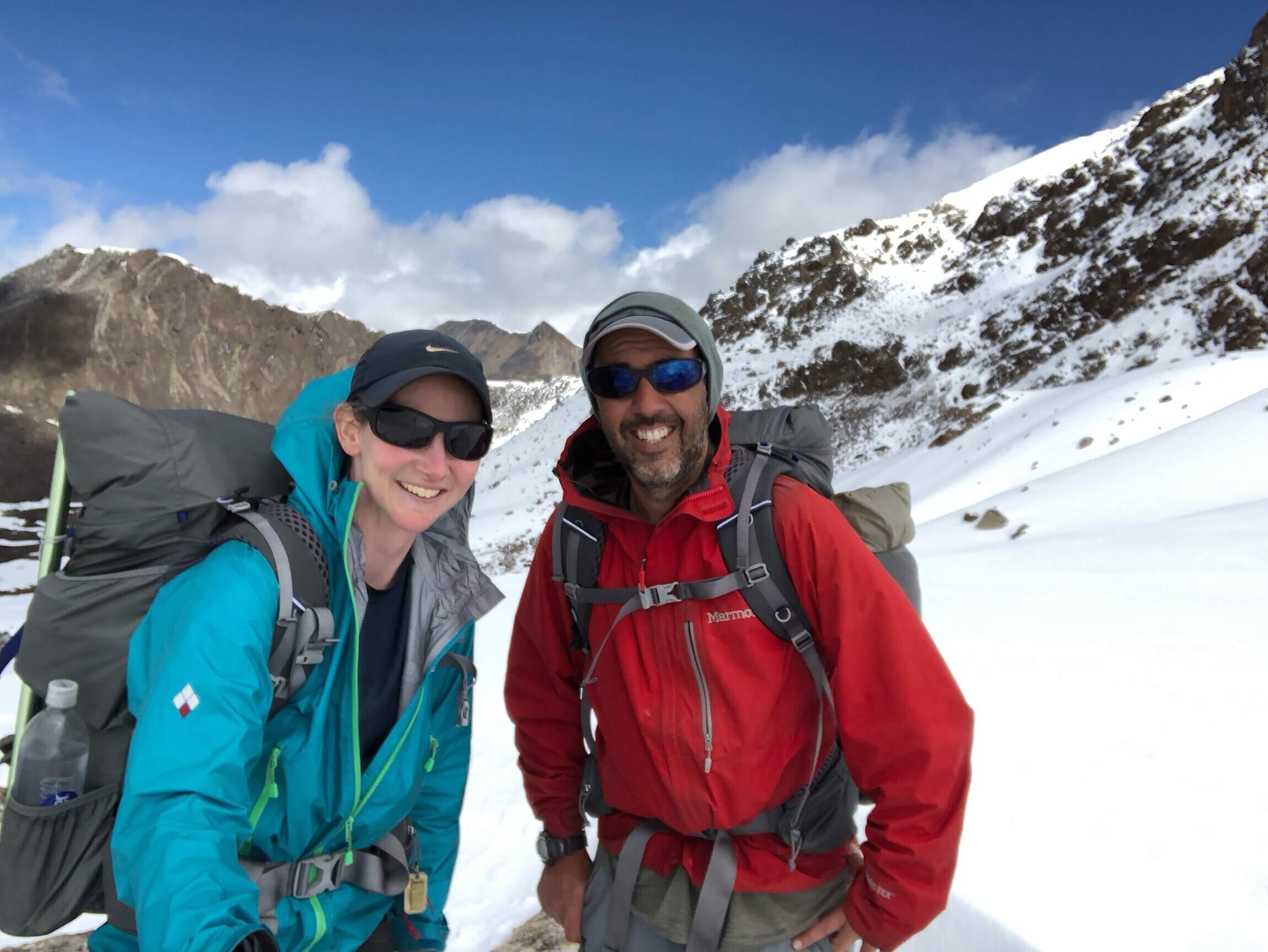 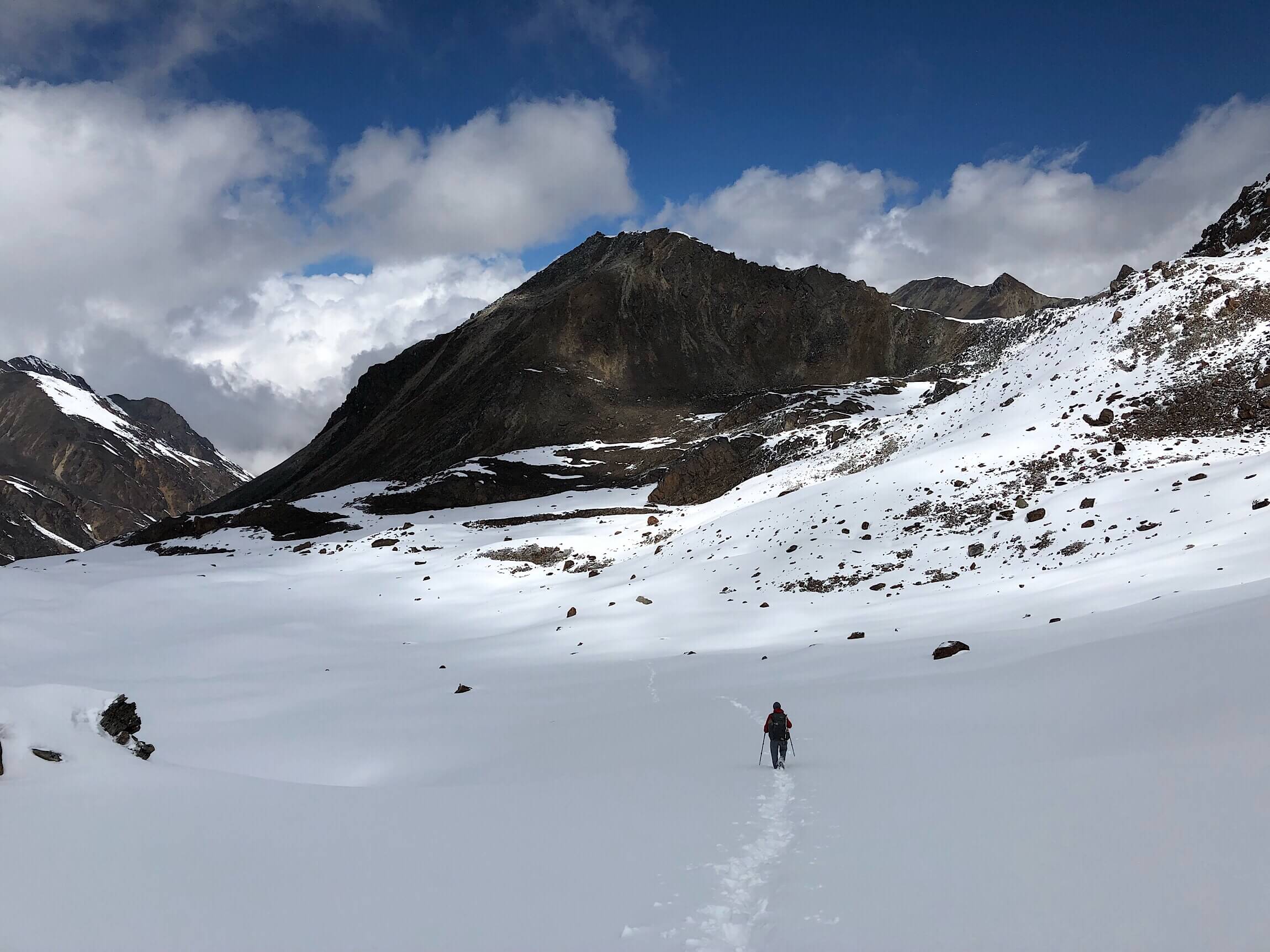 On the way down from the pass, there were a few forks of valleys to drop into, and we knew to be careful given the notes from previous hikers. Our friend David’s track was very helpful, but we still managed to drop down too soon. We just continued down a bit further, and the two thankfully connected. In the meantime, by 11am, we were socked in by fog, and it got quite chilly with light snow falling. We found the most sheltered spot we could from wind and had yet another uncomfortable and rushed lunch. 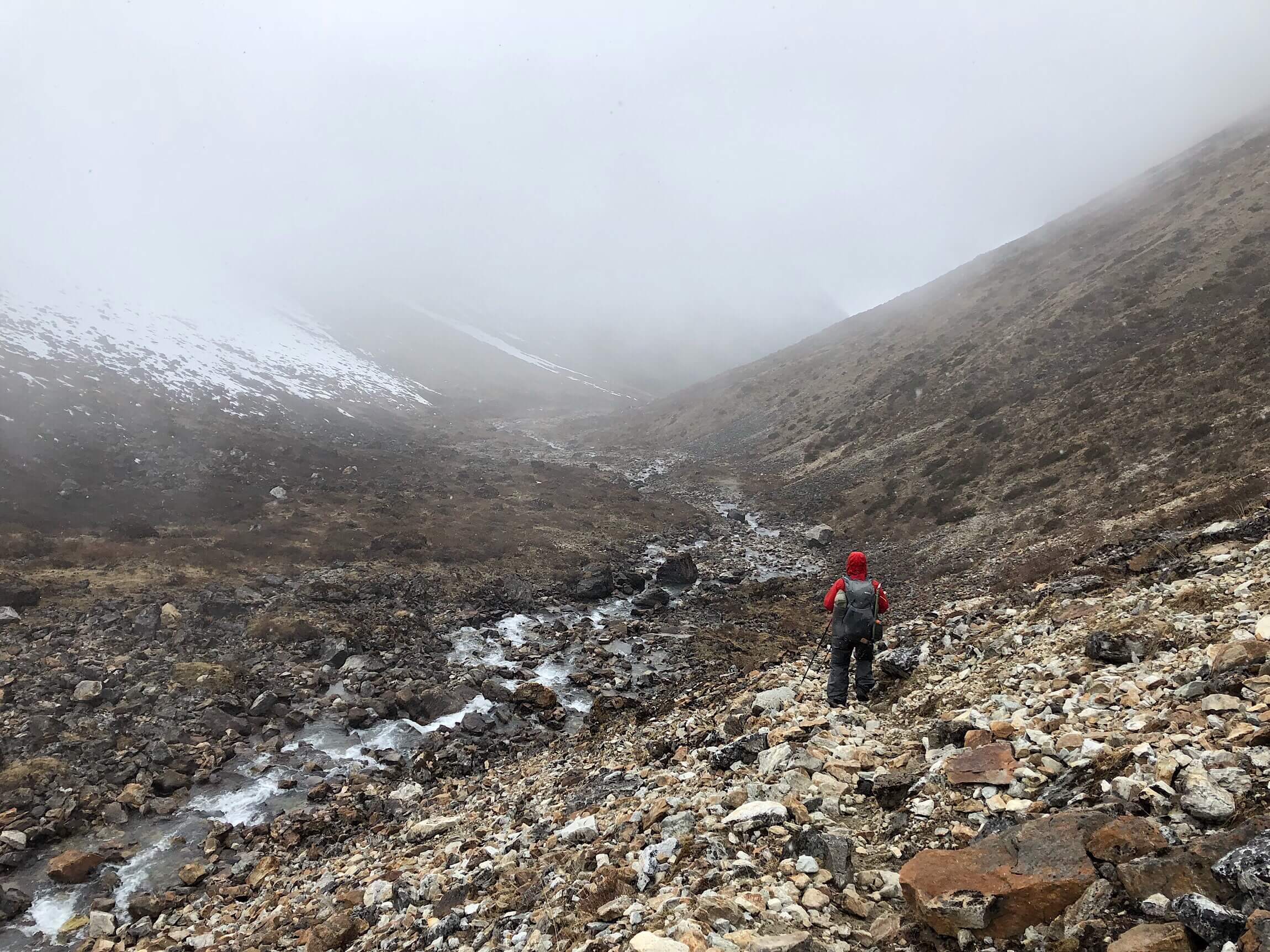 Then came the downhill for the rest of the day. 6,000ft/1829m of downhill. We both generally enjoy downhills, but this one was super slow going much of the time. The path was often very rocky with no way to get a stride in. Even if the trail was flat, it was greatly slowed by the rocks. It got old quick when we did it for a good 4hrs. Plus, I still can’t shake that pulled thigh muscle above my inner knee. That made each step very uncomfortable as well. 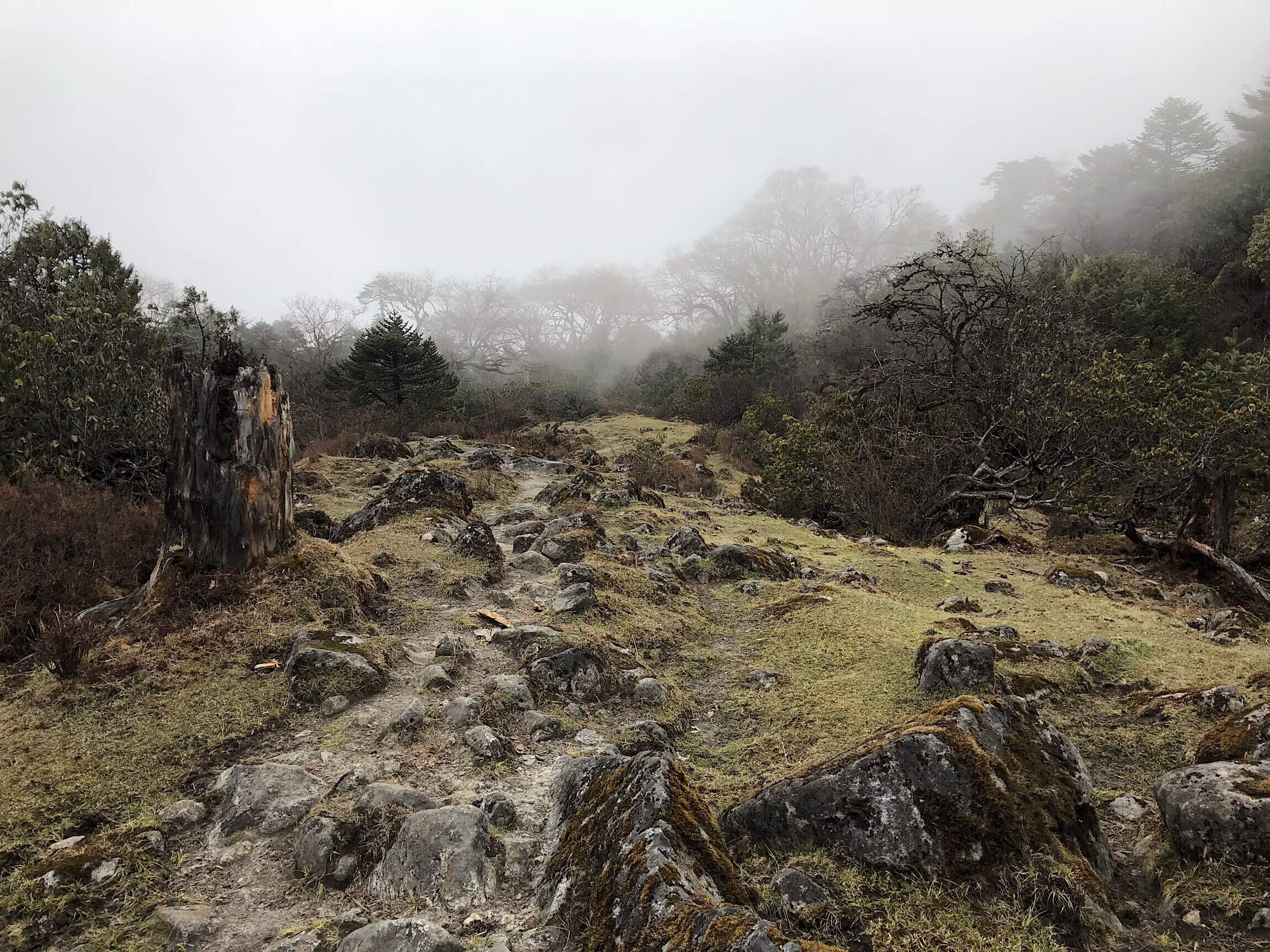 There were also tons of yak grazing areas. I don’t know if I’ll ever get used to such a large animal along the trail. So far, they have been surprisingly docile. They leave huge droppings everywhere, but it thankfully doesn’t smell at all. They are so much more enjoyable than the cows we are used to along the US long trails. 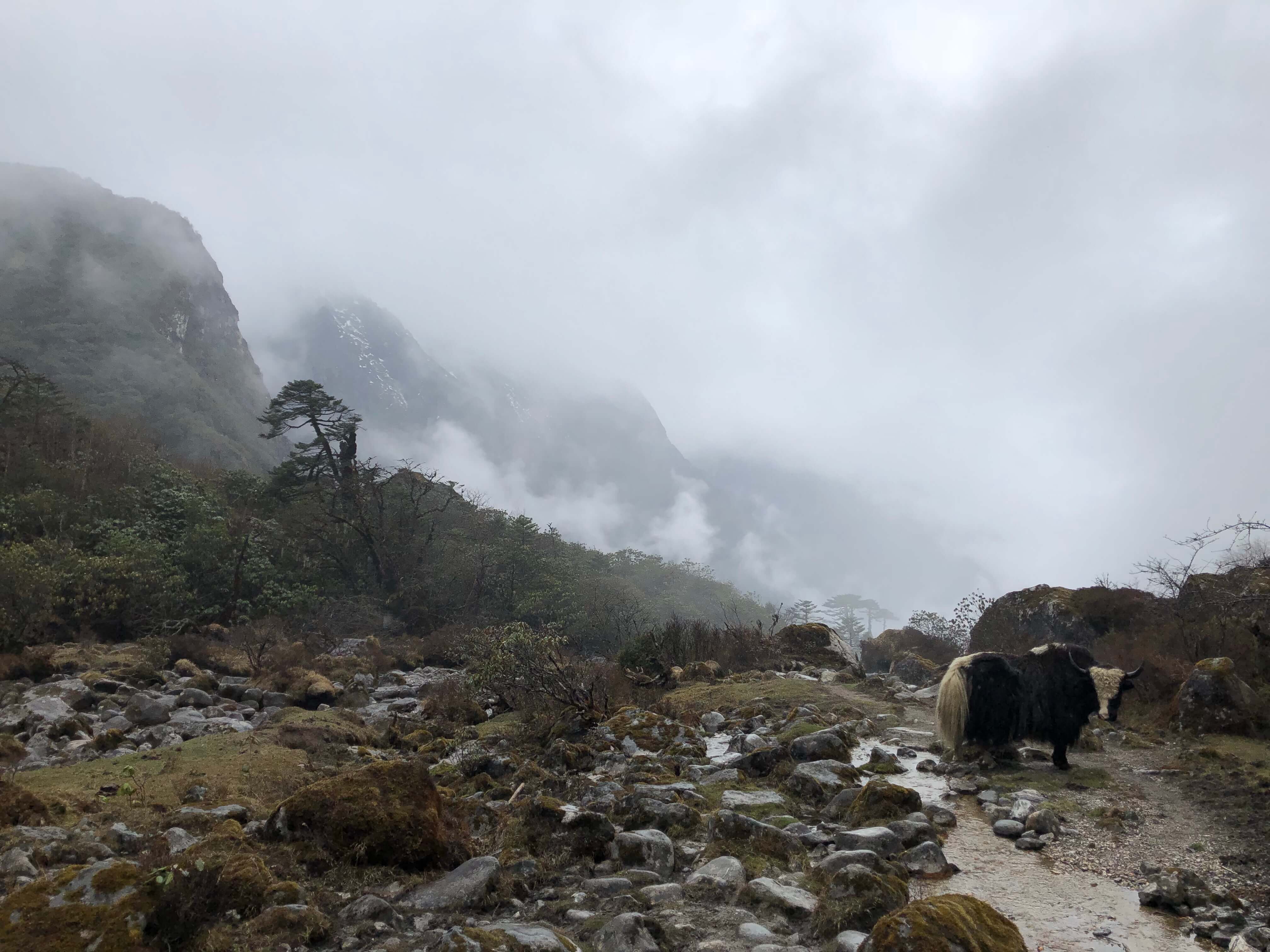 The snow came on and off, but then once we dropped enough in elevation, it changed to a light rain. It was still cold, and we’ve both found our balance with the hiking in the rain at this point, and are pretty happy with the gear we brought. We’ve had plenty of practice, since some form of precipitation comes almost every afternoon.

We dove down to the very small village of Thudam, and knew we wanted to hike on through and camp a fair distance after the village. We both like tenting, and this was the first night we felt like we had the freedom to just walk and choose a spot. Rain was falling on and off, and about a mile or so after Thudam, we found a nice open spot that wasn’t soggy grass. We set up our tents with a light rain falling, and I was very impressed with how dry it was given that we camped in the snow last night and didn’t have a chance during the day to dry them out. 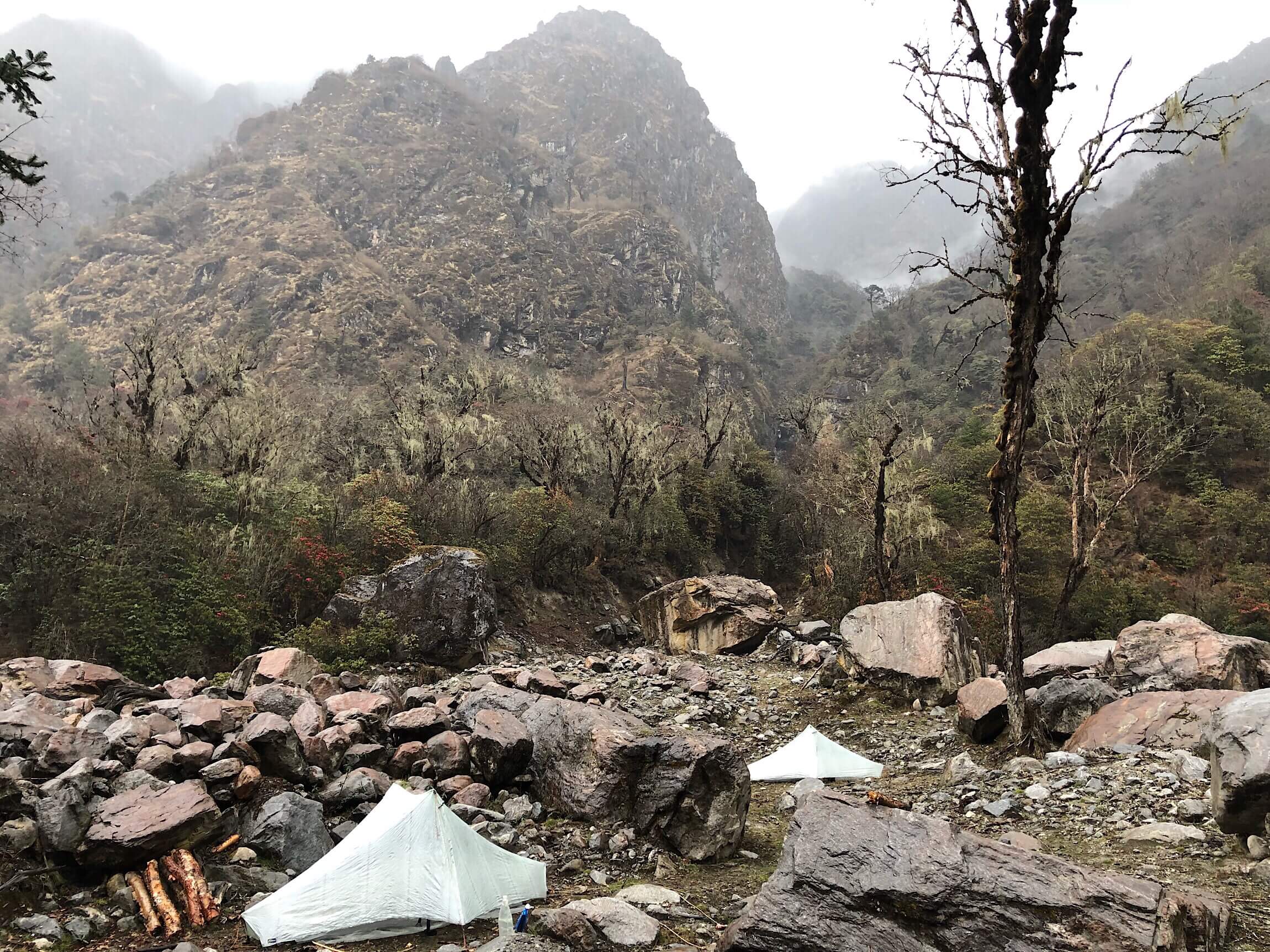 Even though we stopped around 4pm, by the time I got settled and warm in my tent, I was too tired to finish this journal post. The combination of being tired, the cold, and the rain on the tent just knocked me out. I slept, and when I didn’t sleep, I just couldn’t get the energy to write. When we have the option, we like to tent far enough away from one another not to disturb each other. Both of us are light sleepers, and I wake up earlier in the morning to pack up. This spot was good for us to be spread out.

One last note, in the cold and rushed packing up this morning, I managed to leave my trowel where I dug a hole (in the snow) this morning. Ugh, just add that to my list of things lost this trip. I lost my dental floss one of the first nights, my necklace last week, and now the trowel. Ugh…