Day 14: There Are No Easy Miles Out Here

I woke up plenty early to pack up this morning, not wanting to have Buck-30 waiting for me since I take longer to pack up. As I was taking down my tent, something caught the corner of my eye. It was a large black yak just about 15yds away from me watching my every move. Many of them have bells on, but this one didn’t. Scared me pretty good when what my gut thinks is BEAR! He stood patiently and watched for awhile before trotting off without me even noticing. So quiet for such a large animal!

Well, what I can I say about today. Considering that we were up at almost 17,000ft/5181m the first half of yesterday, moving like sloths, and somehow came downhill to finish with 10mi/16km, we thought it would be reasonable to aim for 12mi/19km today down much lower. Oh how naive we were! 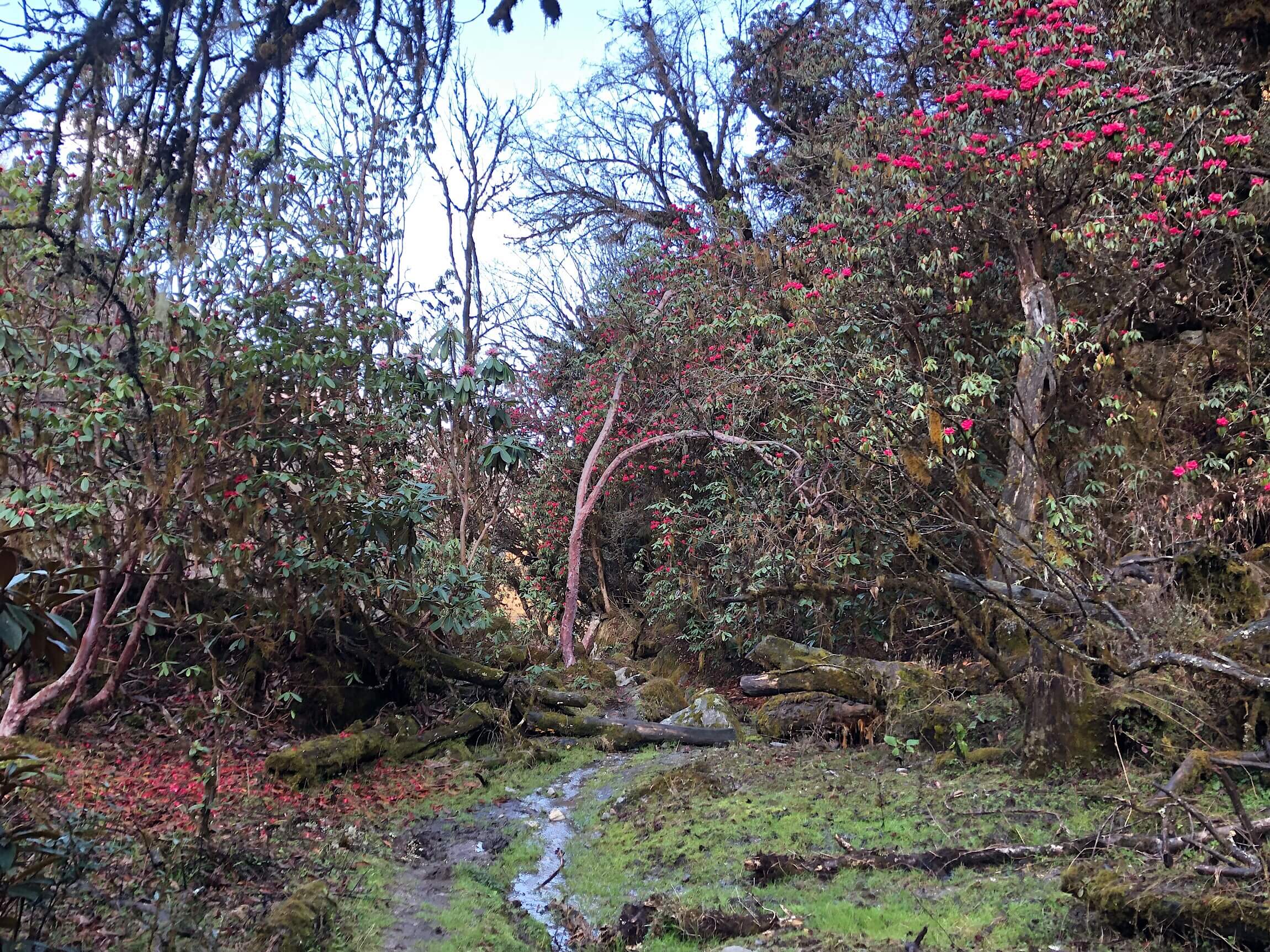 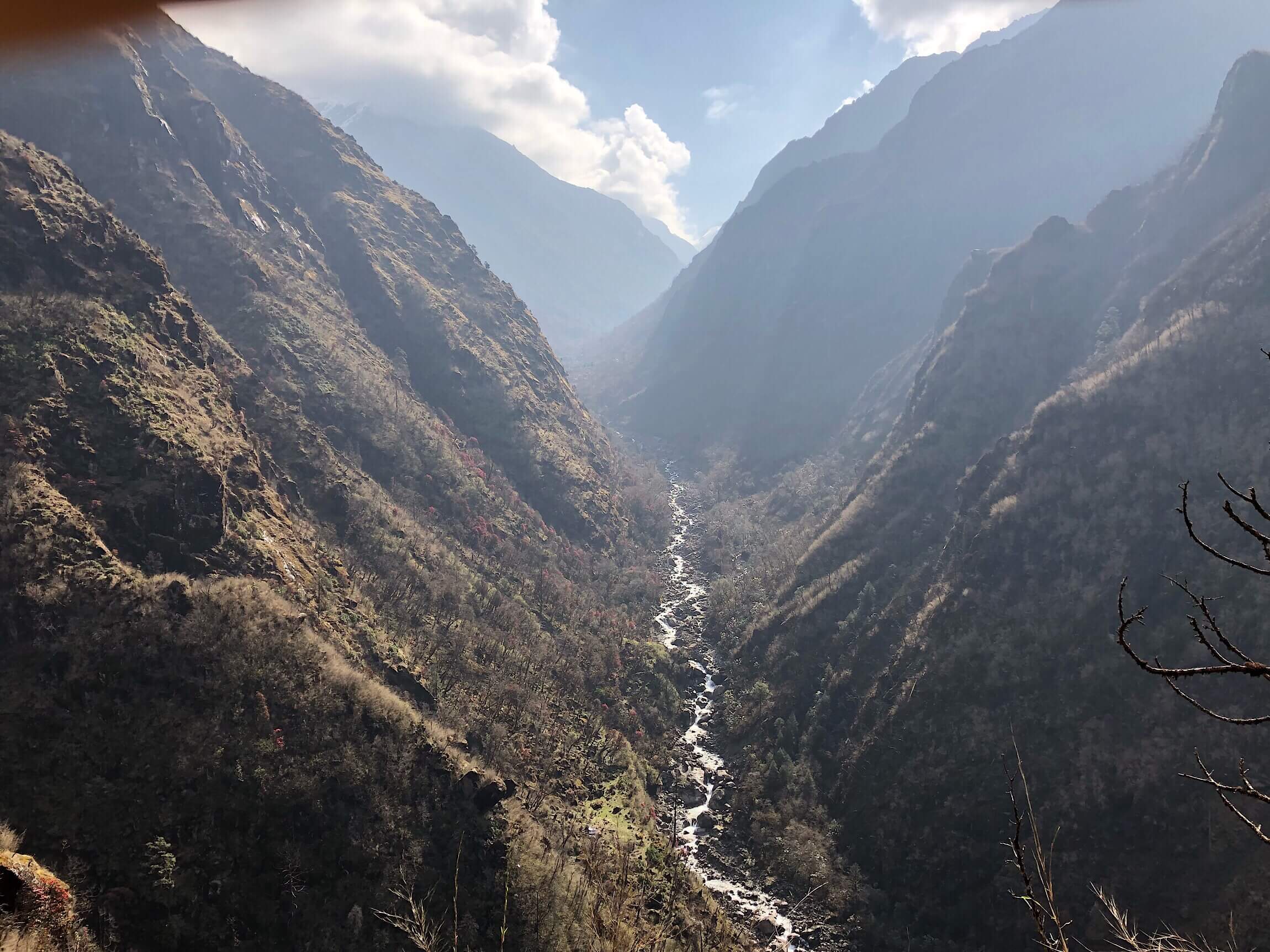 The GHT guidebook author, Robin Boustead, does not give one bit of extraneous information on the trail descriptions each day. So, if he mentions something, it’s worth noting. We knew that some of the previous hikers had trouble following the trail through here. There are some washouts, and subtle turns to pay attention to. Let’s just say that despite knowing generally what to look for, we managed to miss two turns this morning, but just barely. The thing is that barely out here is quite a time consuming error to correct. We likely spent a good 40mins of extra time and energy fixing those two mistakes. Buck-30 will note the specifics in his journal on Postholer where he is noting more of the trail specifics as a resource for future GHTers. I’m just here to tell you how relentless today was. 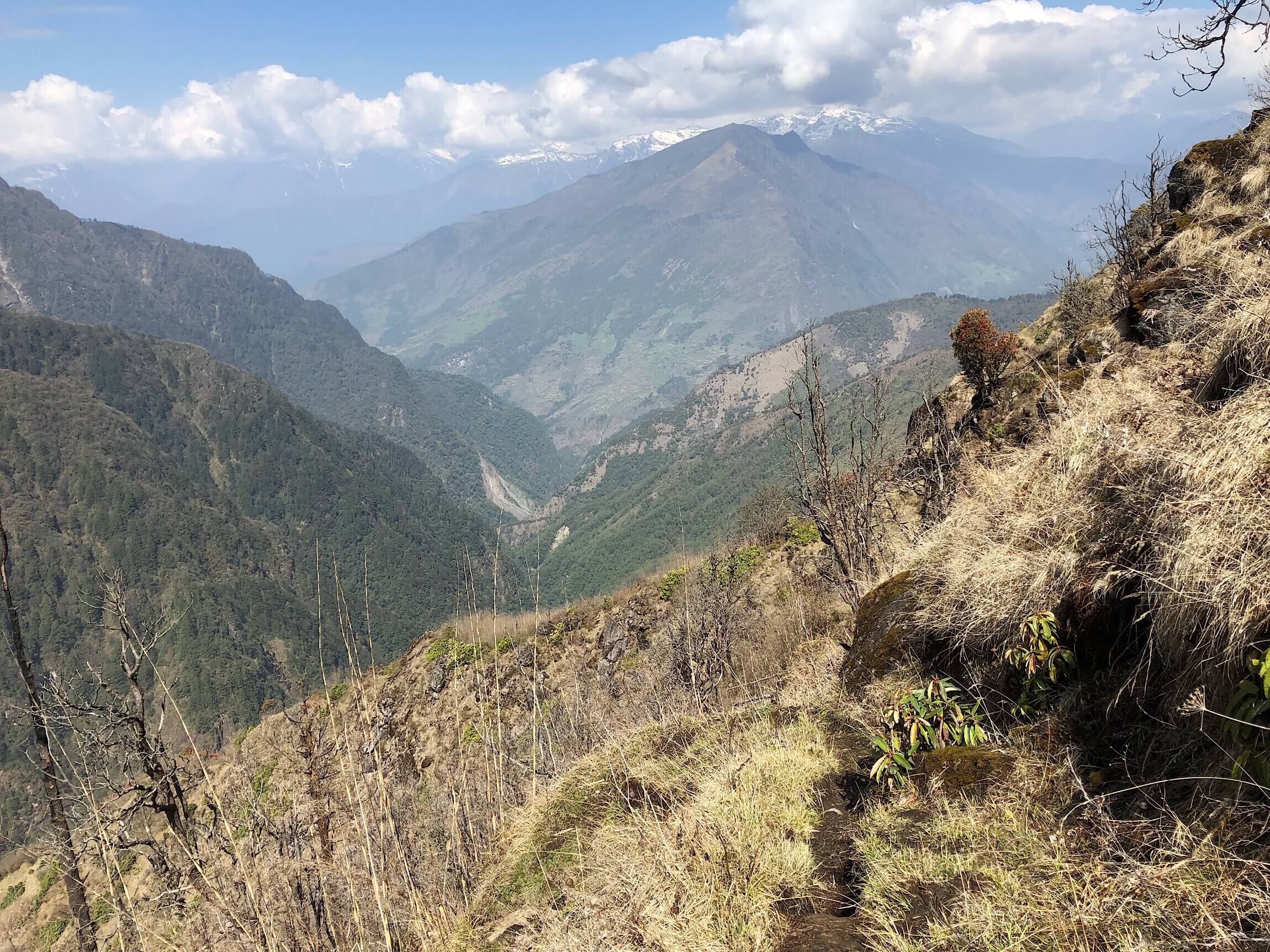 Buck-30 said that the alternate title for today’s post should be “When Every Mile Feels Like The Hardest Mile You’ve Ever Hiked.” By looking at the elevation chart, it looks like we should have had a nice downhill morning. Well, we did…for a bit. Then came a climb that was terribly steep and slow going that is one of those millions of ones that don’t show up on the elevation chart unless it’s much more magnified. A photo couldn’t even do it justice. It was just steep switchbacks of high rock steps. Those rock steps are going to be the death of me, I swear. They are exhausting!

The only mileage estimates we have are from the CalTopo track Buck-30 drew out at home that would be the best guesstimate of what we’re doing. It doesn’t take into consideration the constant ups and downs. Today was one of those days where we had to have done significantly more than the estimate. We started the day off dropping down, and then climbed steeply over 1300ft/396m with the tall rock steps that just exhaust me to go up or down. Sometimes, I feel like those steps were not created for someone my size.

At the top of the climb, we met a couple from India doing the popular trek to Makalu Base Camp. They had two porters, a Sherpa, and a guide. We leapfrogged with them a bit today, and they were enjoyable. It was pretty hot and humid out. The high in the sun was 80F/27C. After that very tiring climb, we wanted a break at water. It was surprising how far we had to hike, and felt like an eternity before we came across water. Once we got to a spot at 10:30am, we were so tired and also excited to finally get a nice lunch spot, that we decided to take at least an hour there drying things off and eating. Buck-30 got to shave, and was pretty excited about that. The porters we met earlier came by and also took a bit of a break there. One of them just stood and watched Buck-30 shave. It is funny how cultures differ. There is no shyness in Nepal in just flat out staring at someone you find interesting.

We couldn’t believe how slow our progess was, still just barely more than a mile an hour. It’s tough to explain how slow this terrain can be. In the afternoon, we had a leg wobbling descent to a river before a steep climb to the village of Chyanmtang. We dropped some 3,000ft/914m in like 2mi/3.2km.

My muscle in my thigh that’s been a problem gets worse later in the day. Oh man that one hurt! At the bottom, it may have been a low point for us in many ways. We both were just drained, and dismayed at the lack of progress when we are putting in so much effort. There was a conversation as we collapsed at the bottom of worst-case-scenario, downward spiral thinking that we’ll never finish in the timeline we need before monsoon season hits. After venting all that out, we finally got up and moved on up the hill to Chyanmtang.

We got through the village, just before 5pm, and knew we wanted to camp on the other side, but far enough away to not be disturbed. The village was super quiet and almost seemed deserted. We heard thunder rumble, and could see by the topo lines on the map that the pickings could be slim. We decided to take the first thing we could find, and not press our luck. On the outskirts of the village, we found a side trail that led to a spot with a pile of pine tree branches piled up. We cleared spots, and got a fair bit of sap on our hands. Sprinkles came down, and we pitched just in time as it turned to rain on and off for the night. Nailed it! 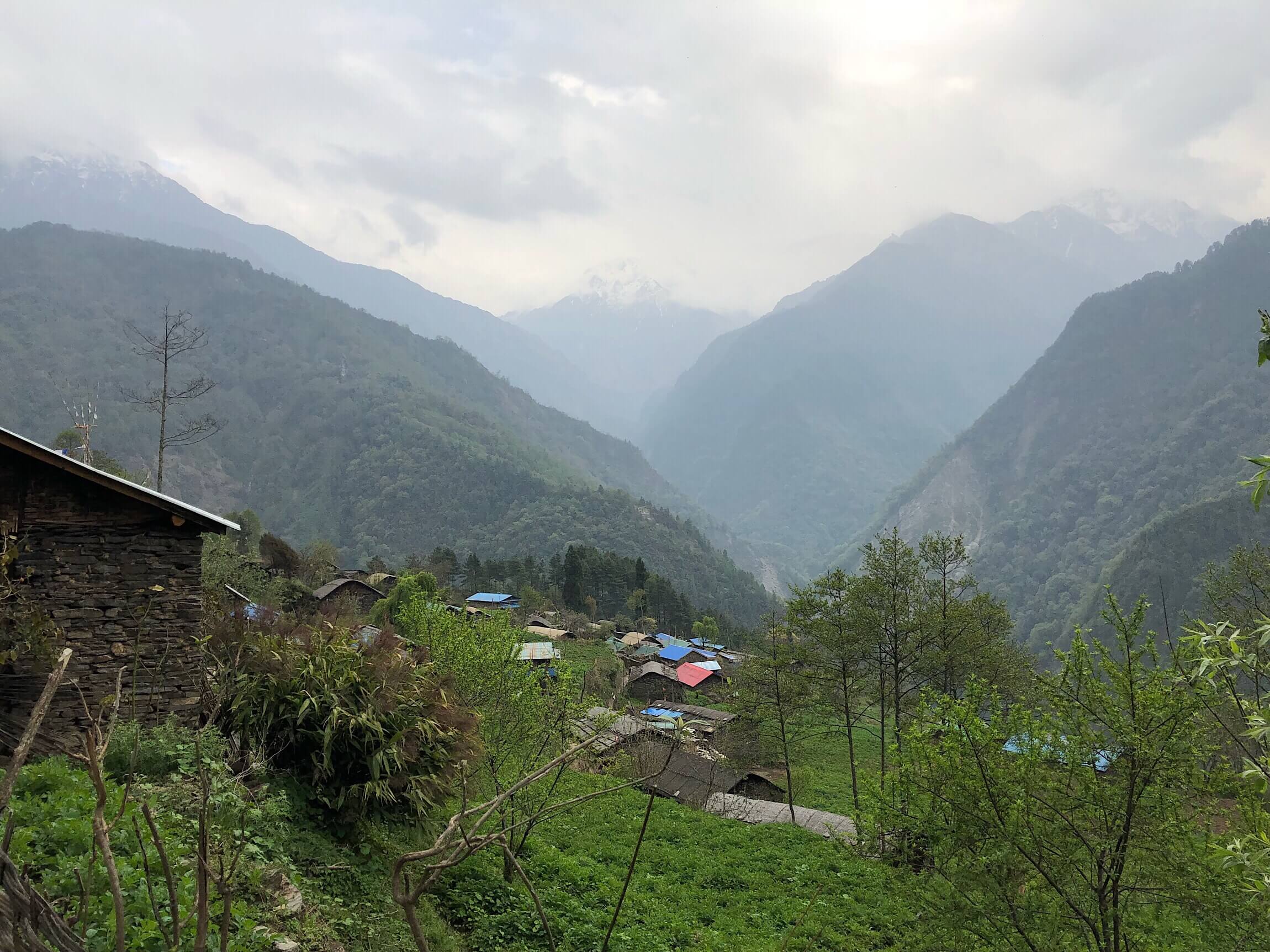 As we got settled, we could hear some kind of event happening in the village. It almost sounded like a concert with cheering and techno music again! It is so random to think you’re in the middle of nowhere totally remote, and have techno music with a crowd chanting and cheering somewhere in the hillside. We also unfortunately camped below some viewpoint where people apparently gather. They arrived after dark, and thankfully retreated by 8pm. The music also thankfully stopped by 9pm. The rain may have helped with that, whew. Again, I’m struggling to stay awake being totally wiped out with the sound of rain on my tent. What a defeating day. 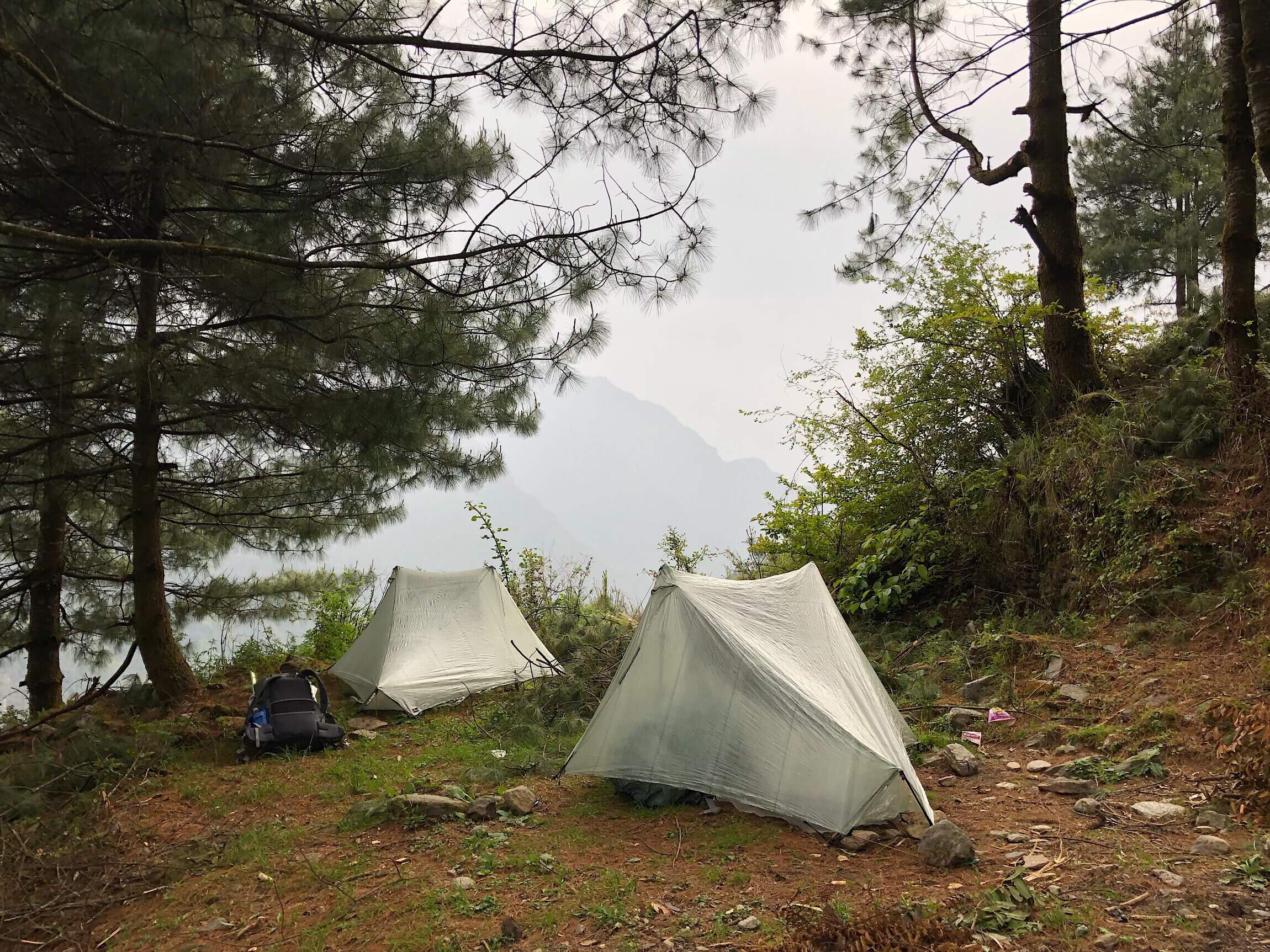