Today was a pretty uncomfortable day. It was really hot and humid all day. We were dripping sweat. It was 80F/27C, which alone isn’t terrible, but with a very heavy blanket of humidity, it was quite uncomfortable. We did start out with the best sunrise yet. As we left the guesthouse, we got pretty good phone service, and stopped right away to get a few things loaded. We also had the seemingly daily navigation confusion that had us basically starting about 20mins later than we would have liked. We’ve gotten used to this happening once or twice a day, and delaying things. We are lucky to have my friend David’s track, who did this section last year, because it would likely be even worse if we didn’t. The morning was basically diving downhill through cultivated fields to a river crossing. It was a bit confusing because there are tons of small paths running everywhere. 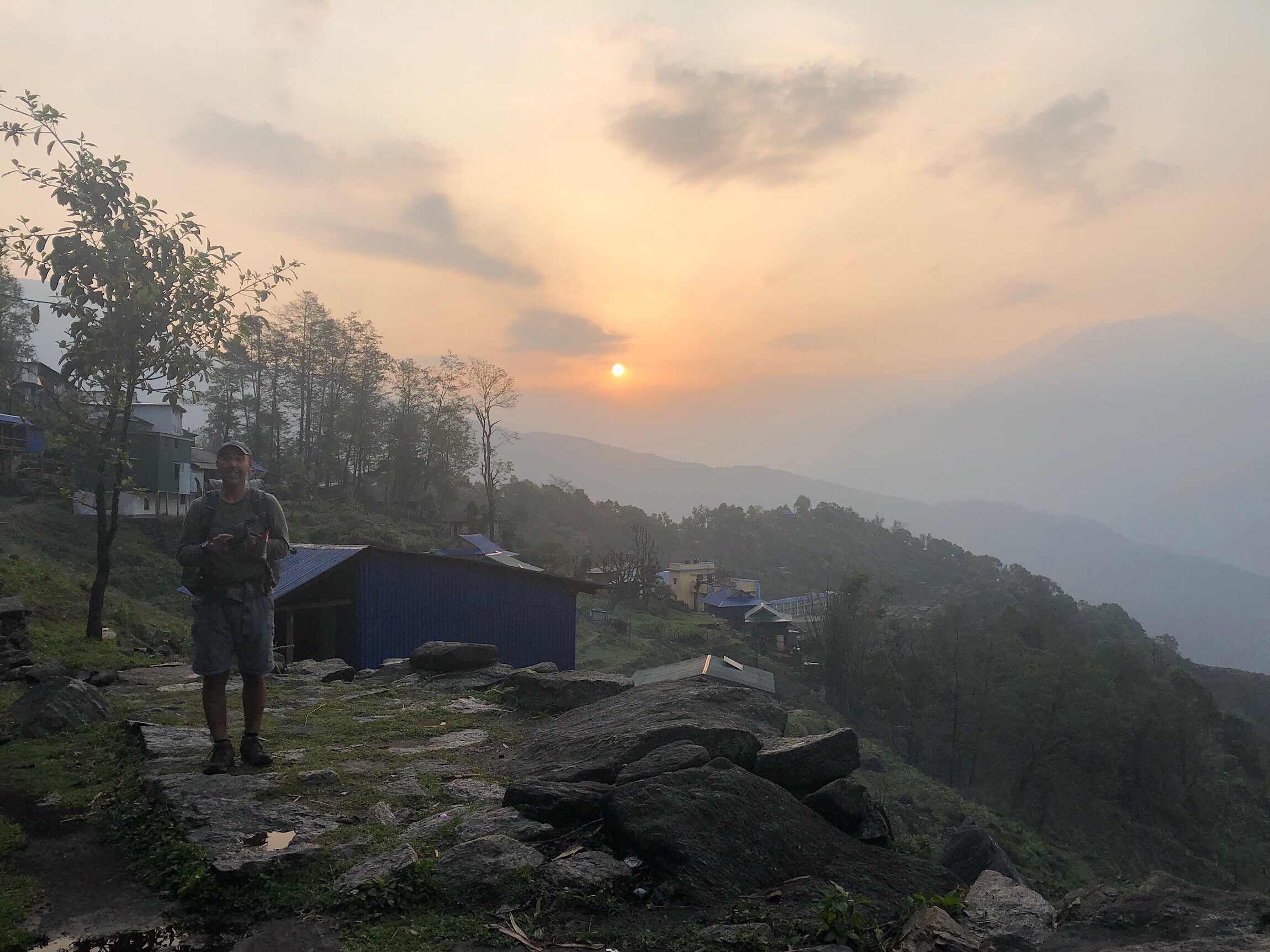 It got increasingly more humid and muggy as we went down. There is a plant similar to stinging nettle that was super annoying. I hit it a few times today with my legs and hands. It stings quite a bit and left small irritated bumps on me. Buck-30 ended up putting his pant legs on just to be safe as the trail got more overgrown. He tends to have allergic reactions to things. 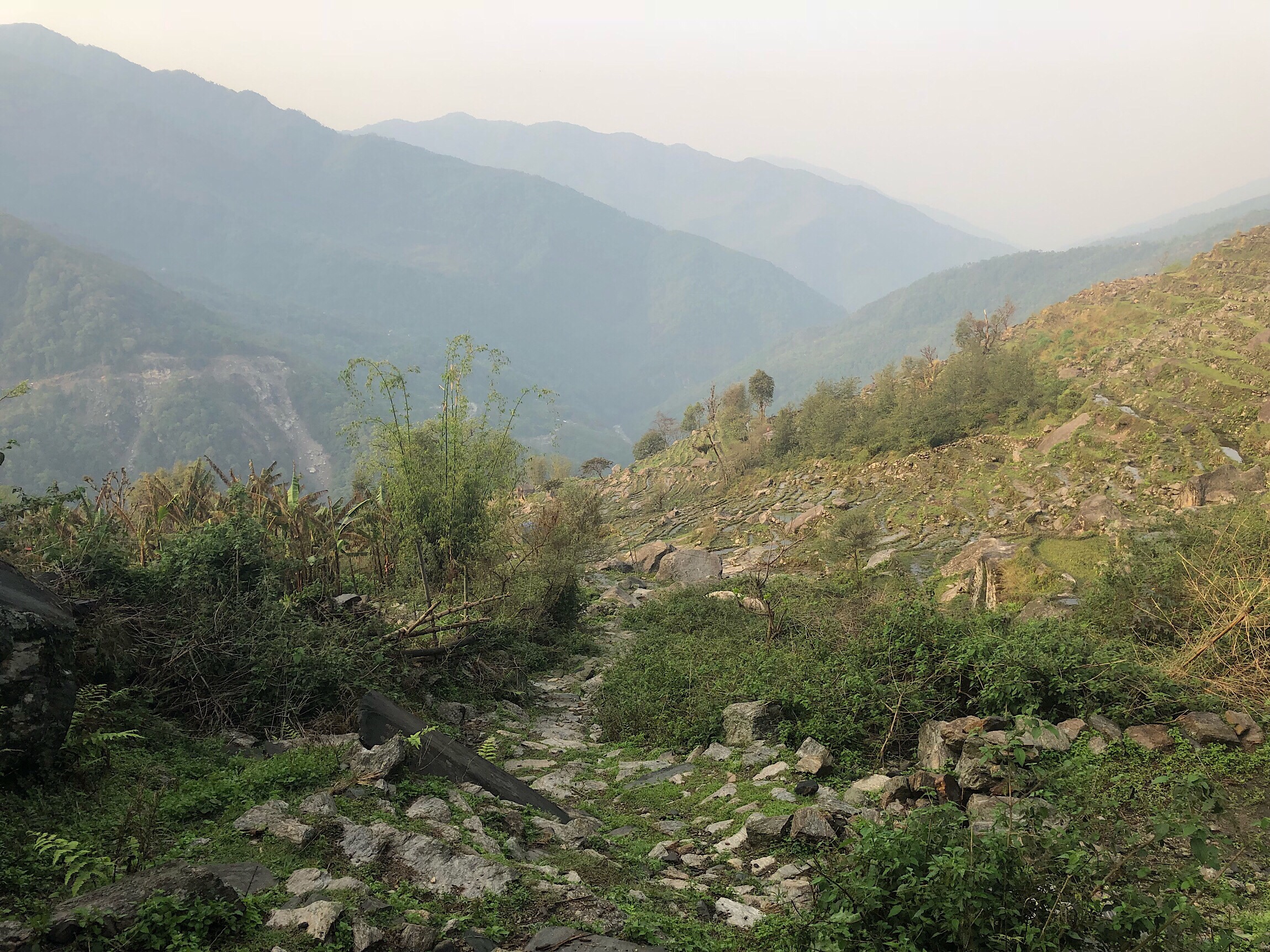 On the way down, we crossed an older suspension bridge that was being repaired. I’m not a fan of heights and exposure, but have been fine on the bigger bridges that are strongly constructed of steel and have high railings. This one was not one of those. I got psyched out with the gaps in the wood and and lack of a more substantial railing. 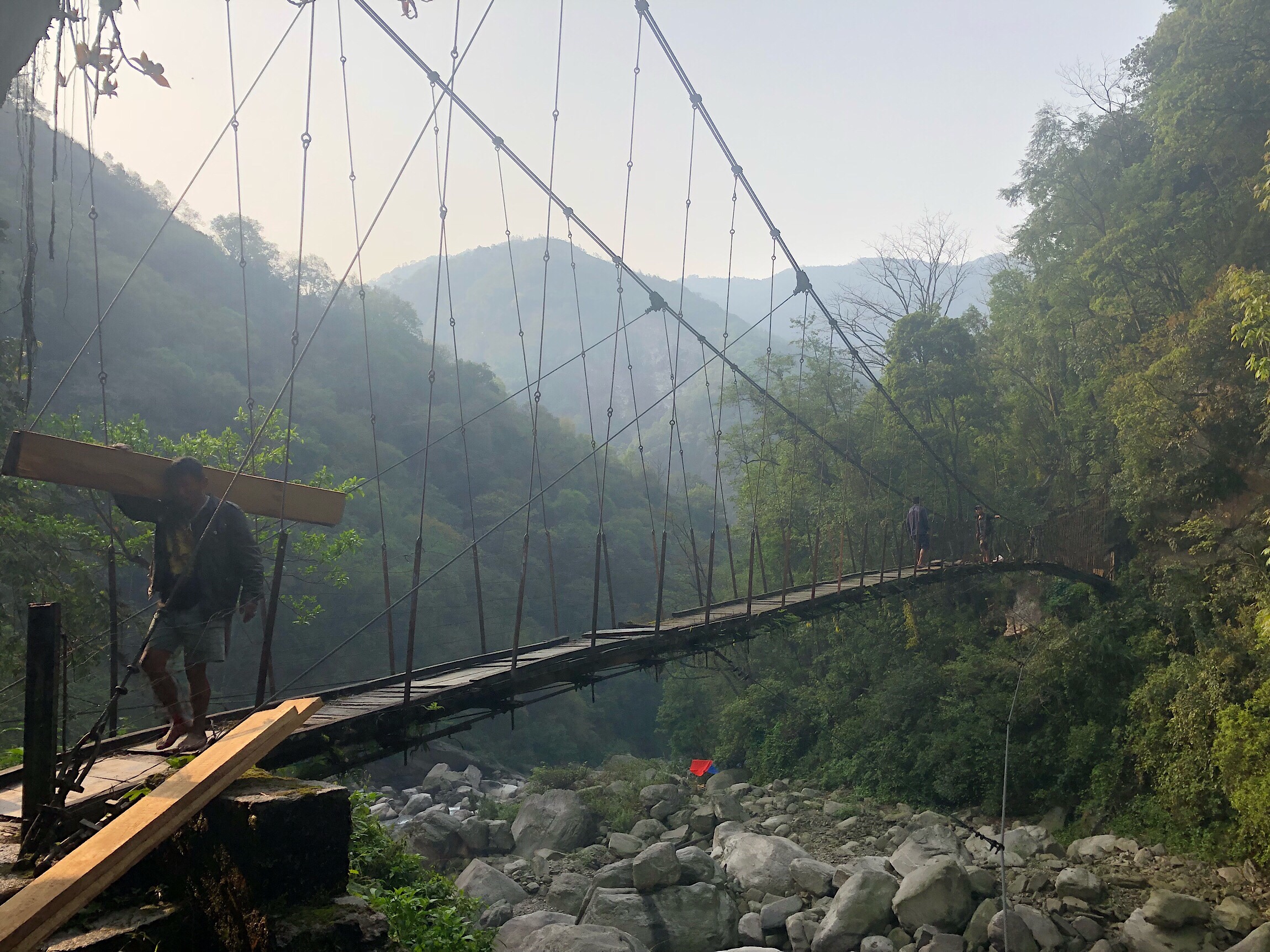 I got over a couple of the gaps, but right in the center was what felt like a gap the size of the Grand Canyon that they were working on. I froze and got dizzy. All I could see was me falling through the hole. It took me a bit to get the motivation to step over it, and I had people in front and behind me that also freaks me out. As soon as I got over it, I just wanted off the bridge as soon as possible. I picked up the pace and was practically running. Towards the end, I slipped on the wood that had a good layer of sludge and completely fell on my side on the bridge. I popped back up and got off as quick as I could. I totally could have slid right off the side of the bridge. Buck-30 was right behind me and said it didn’t look good at all. My legs were shaking so bad on the other side that I had to give them a minute to get the adrenaline out before hiking on. Not my favorite moment at all.

We got down to our lowest point yet, below 2,000ft/610m, and continued to drop. The blanket of humidity was quite thick and it felt like we were in a jungle in Thailand to me. The thermometer said 83F/28C, but it was the humidity that really was the kicker. The trail was quite brushy, and combined with the humidity, I was in a claustrophobic mood. I just wanted out. The trail was very slow going at times with jumbled rock terrain. The following photo IS the path. Right over the rocks. 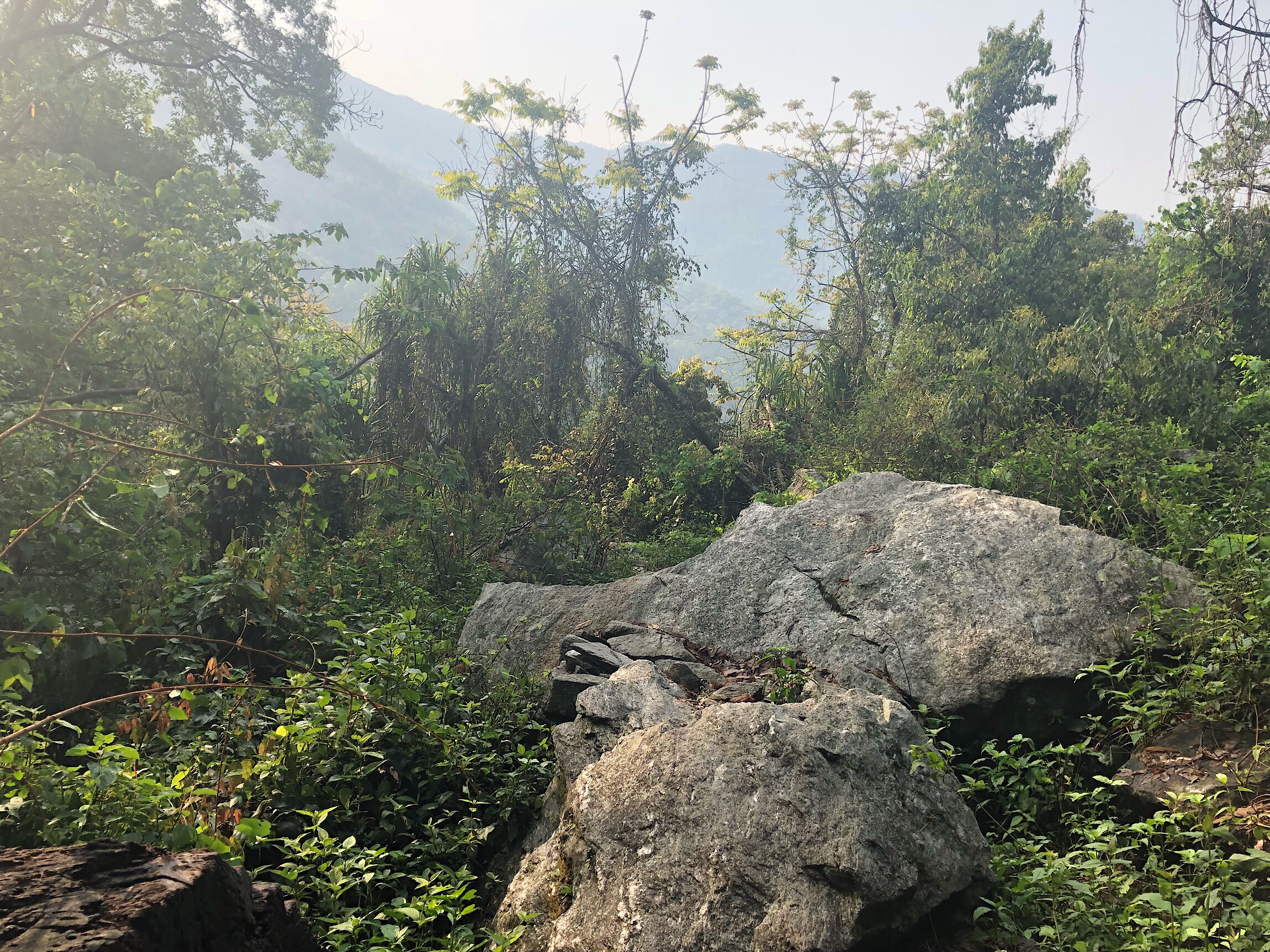 We needed a lunch break, but there was really nowhere to sit. Earlier, we sat for a water break right in the trail. It was not relaxing because we could not sit comfortably, and there were ants and leeches to fend off. With little shade at all, we grabbed water and walked a bit until we found the best patch of shade we could. We laid out our ground sheets to sit on to fend off leeches. When Buck-30 took his shoes off at the break. A quite distended leech came out of his shoe and he was bleeding on both ankles. We only saw one leech, so the other one must have come out while walking. Eww. I’ve still managed to dodge any attaching to me so far. We ate lunch on our ground sheets and when I stood up, I had puddles of sweat on the backs of my legs. I don’t know how I could possibly drink enough water to replace what was sweat out today. 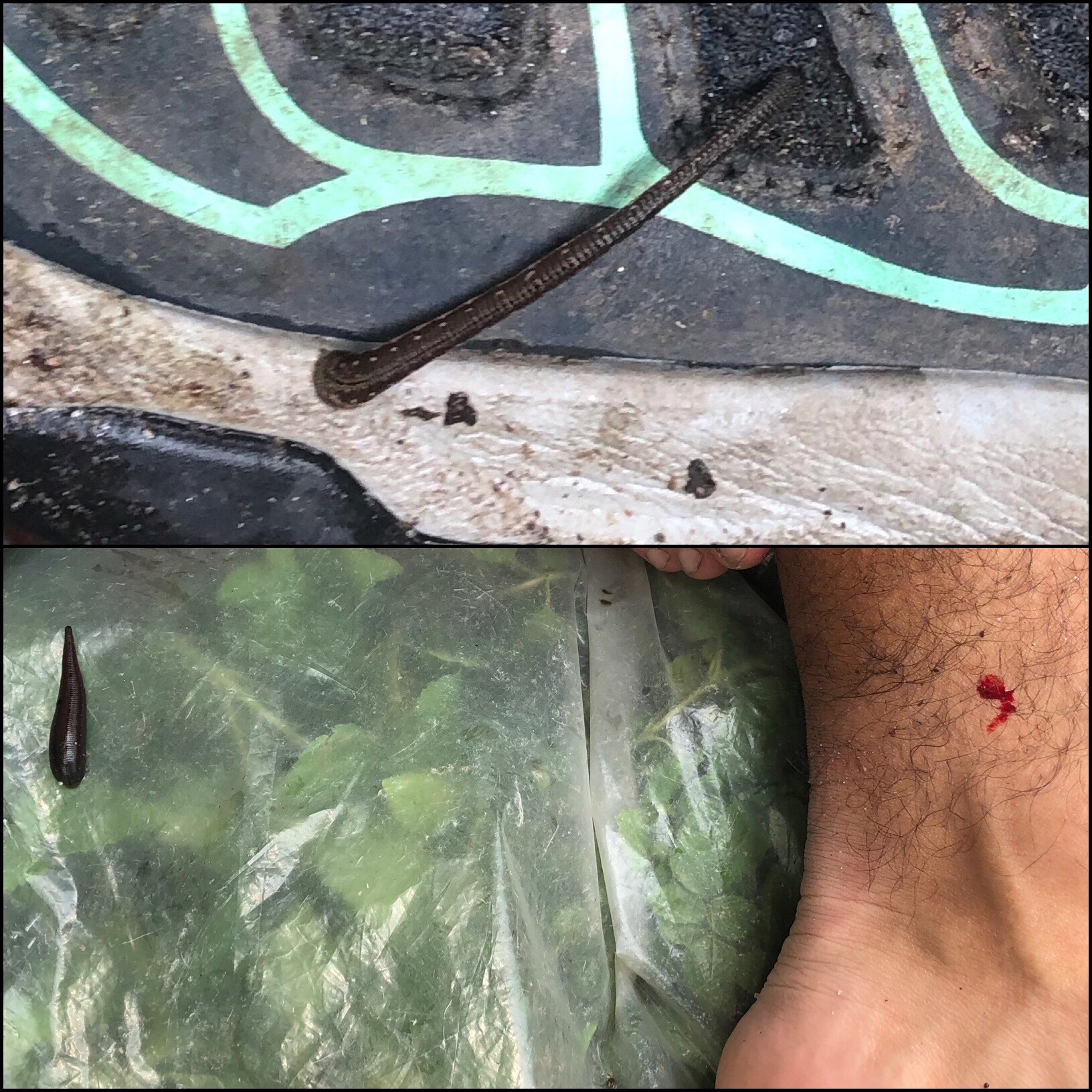 A leech on my shoe and an enlarged one from Buck-30’s ankle. 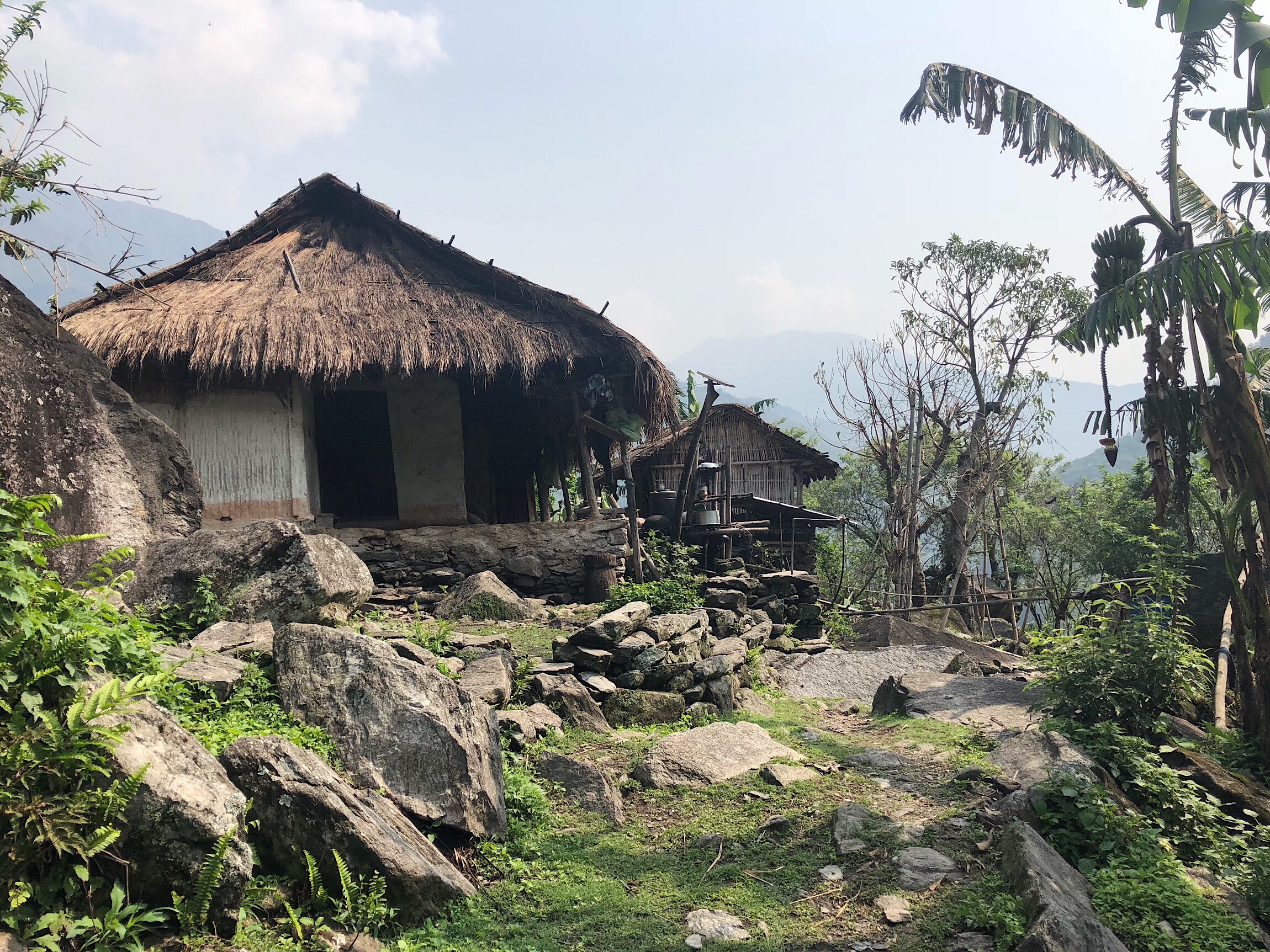 We knew there might be a gap today in villages with small stores. I’m just about out of the food supply I brought from home, so the remaining 4 days or so, I’ll need to eat whatever I can scrounge up in the villages or meals in guest houses. 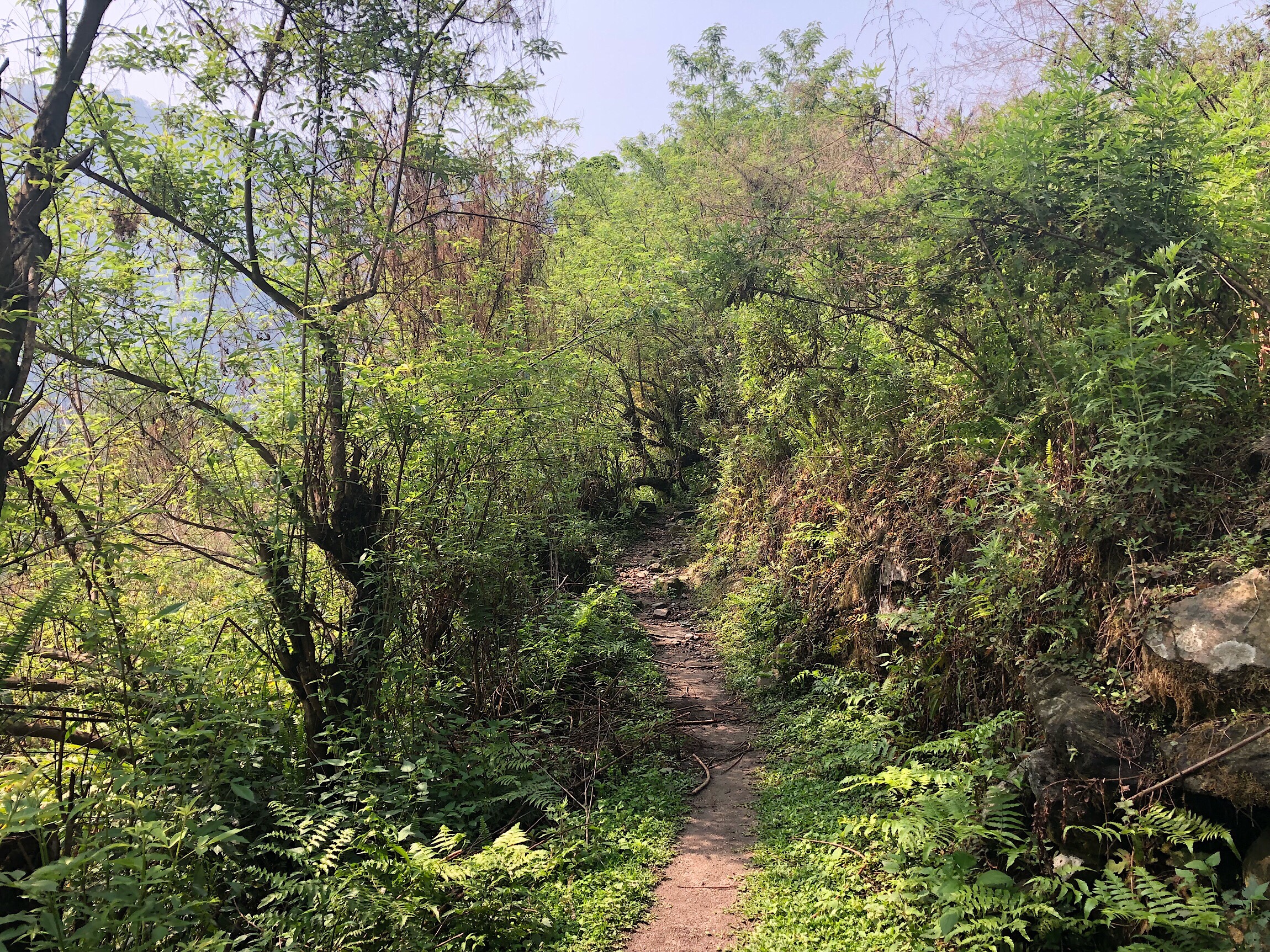 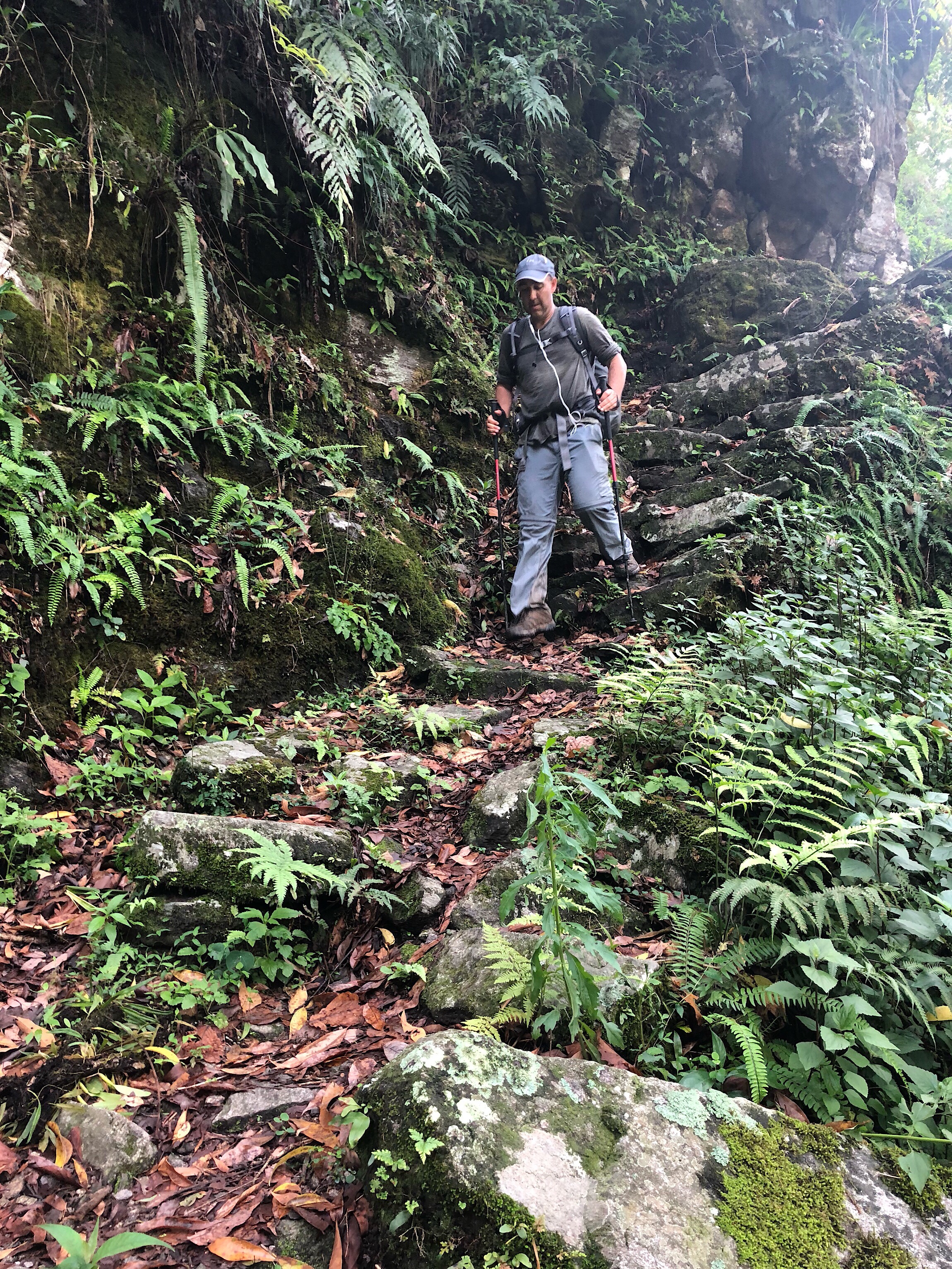 The latter part of the day, the trail finally cleared up a bit and got more relaxing to walk on. It was a nice walk up above the river in the trees. There were many leaves on the ground, and it felt like fall. 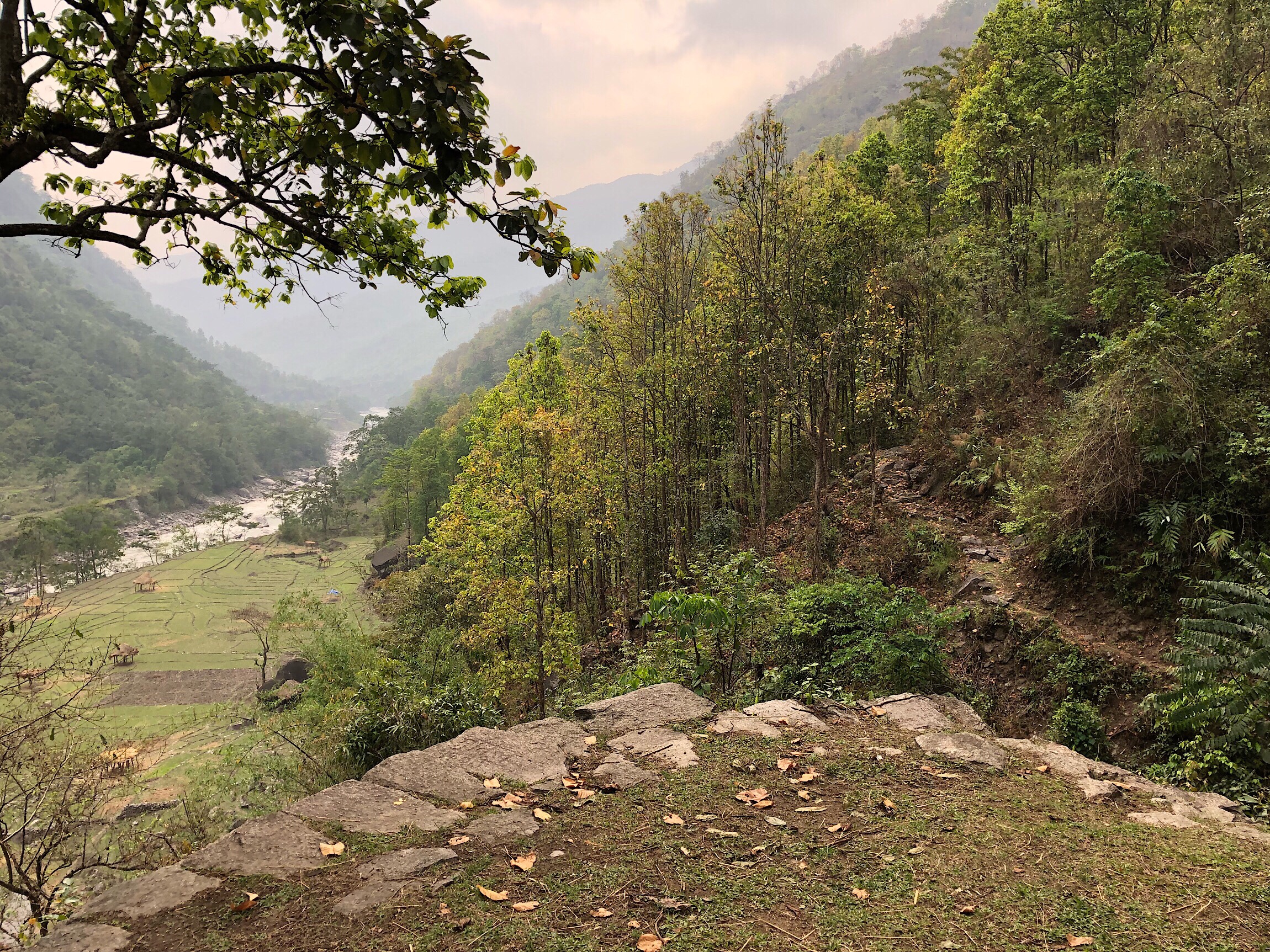 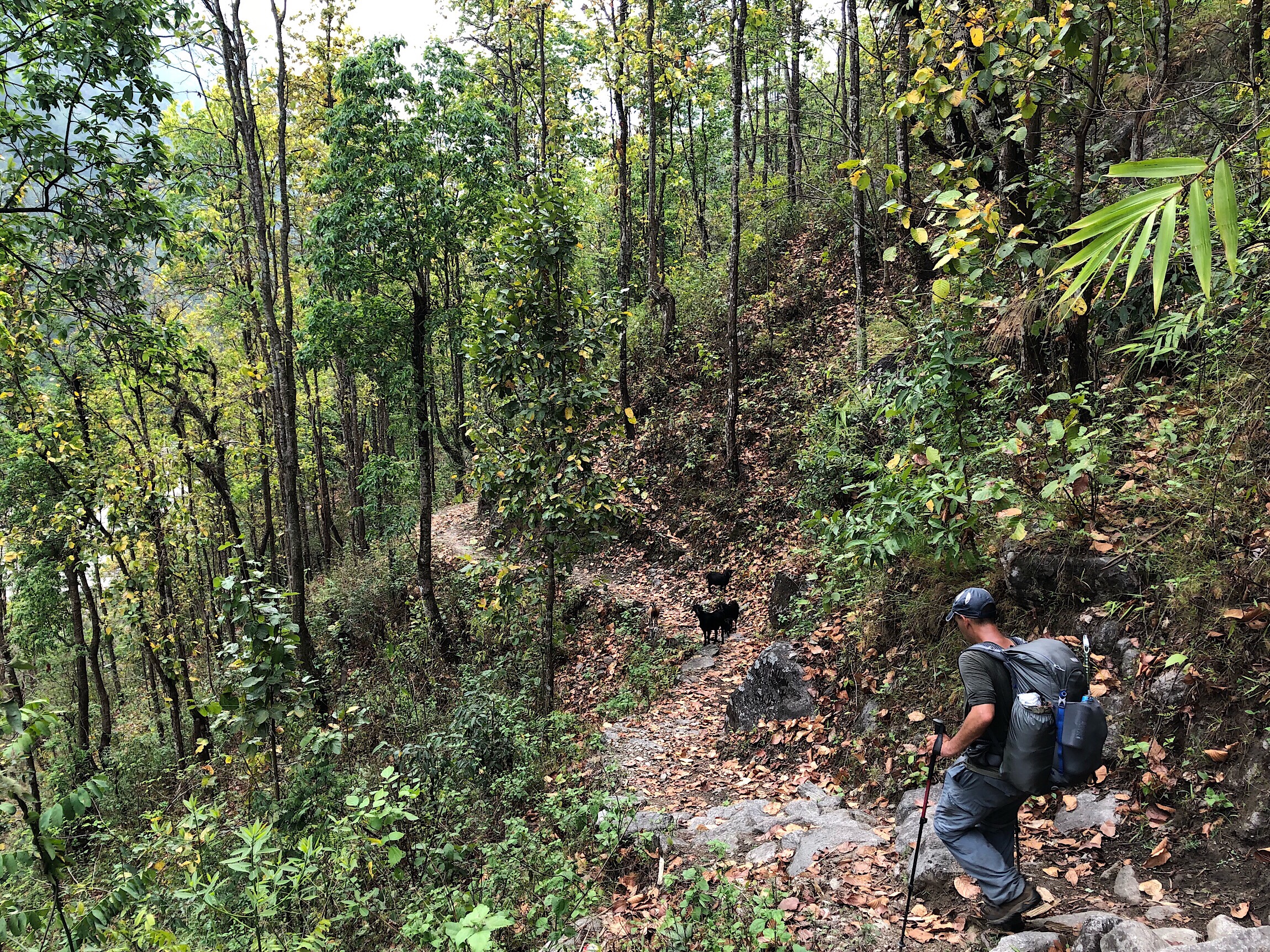 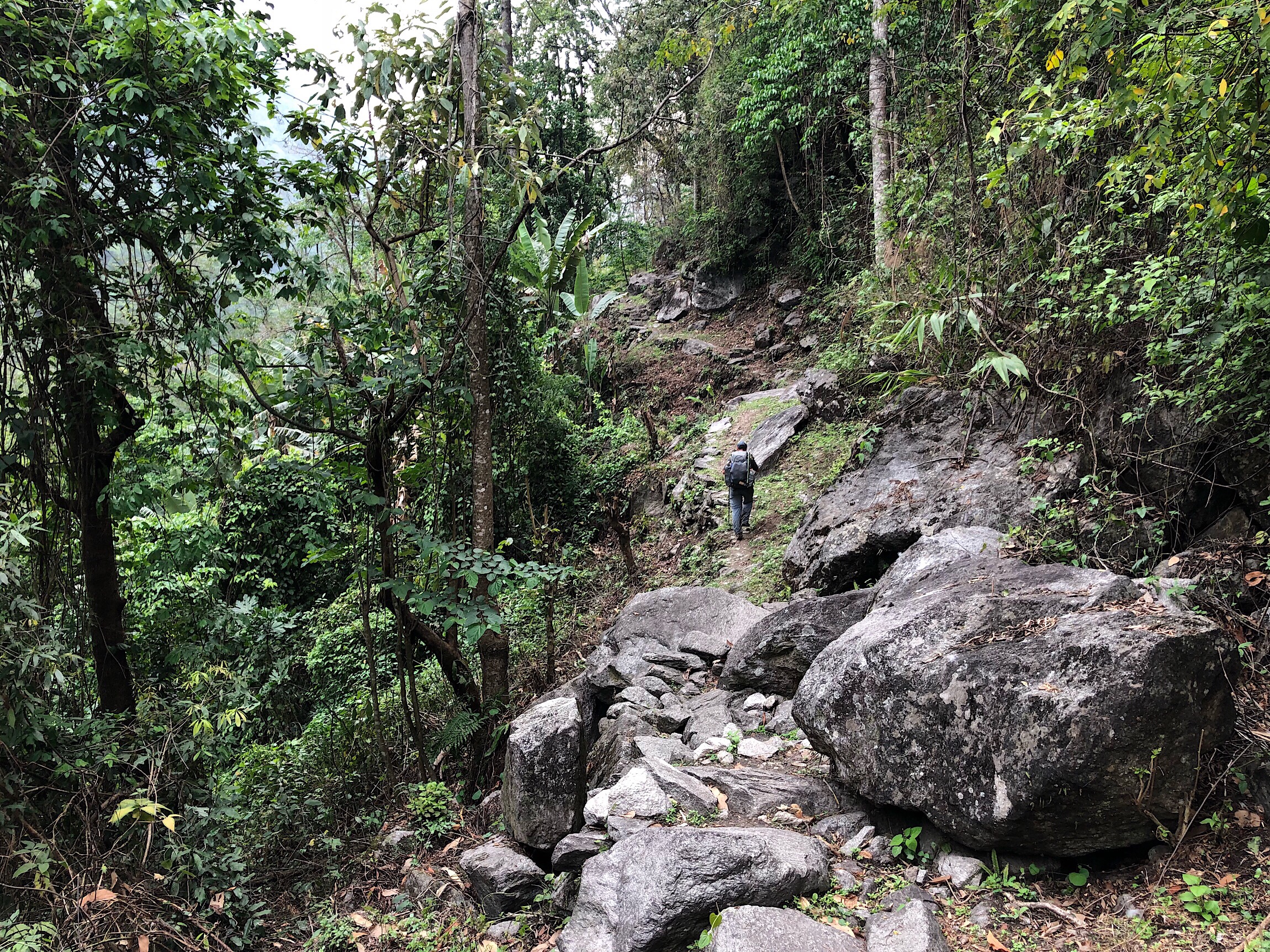 In the last hour of our day, the sky turned darker and thunder rumbled. That’s been happening nightly, but this one felt like it could really become a harder rain. We grabbed water and dropped in elevation as we looked for a spot to pitch our tents. The pickings are pretty slim because the terrain is either no good for camping, or the only flat ground is there because someone has cultivated it. We were pretty proud of ourselves that we found a perfect little sheltered spot just on the back end of a cultivated field with many ox. It was secluded from the land they were working on, and out of sight, so we felt good about not camping on someone’s farming land. 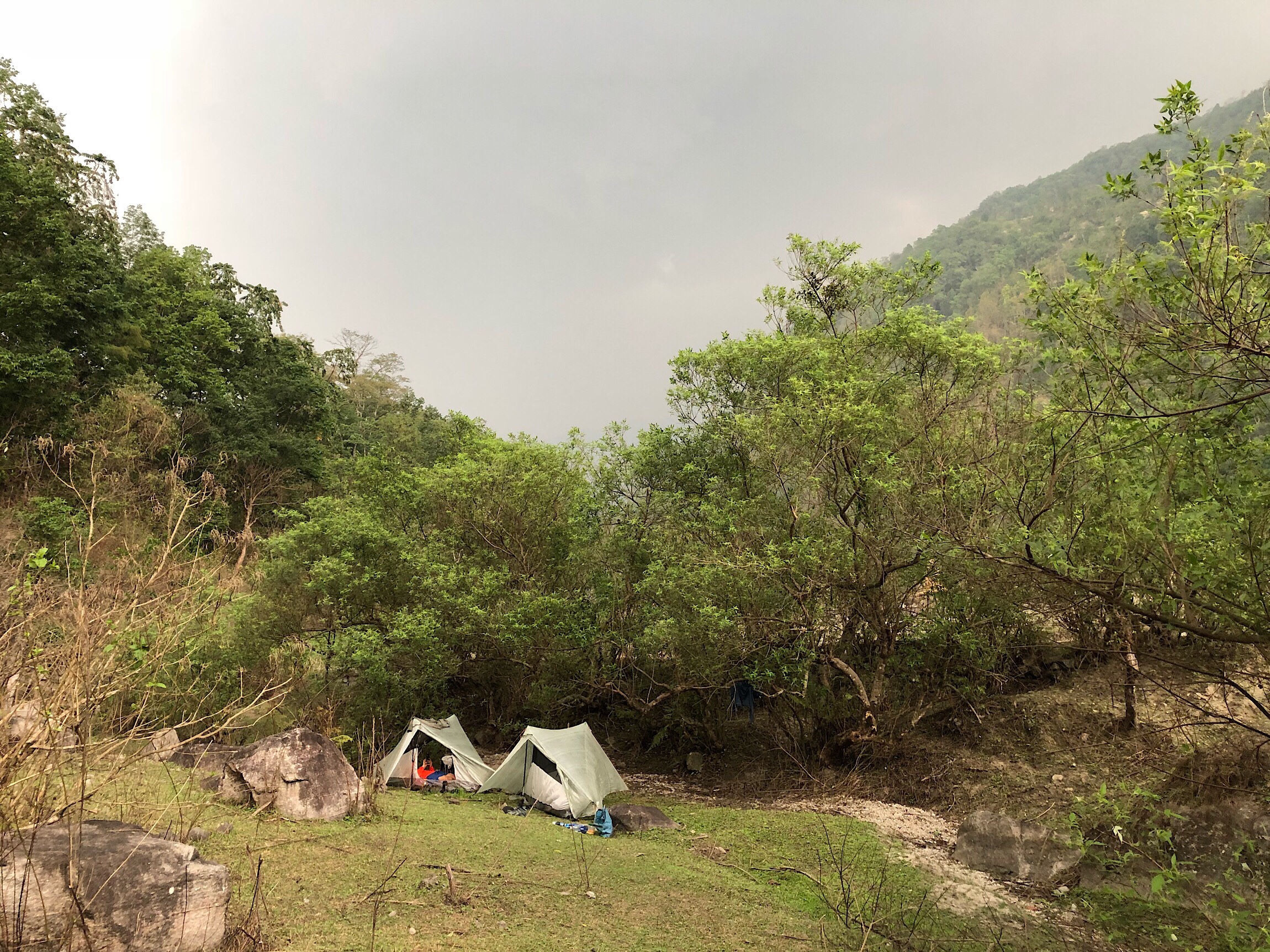 It is our favorite spot yet! It was probably because it’s one of the first nights we weren’t immediately hit by rain or in some uncomfortable space. I even had a sitting rock to enjoy my cold soaked ramen noodles (I get my stove in Lukla at the end of this leg). The rain and wind did kick in later in the evening, but it didn’t last more than a couple hours. I have to give these tents credit. The Tarptent Notch Li has protected us from the nightly rain every time we’ve used them so far in Nepal. It is small, but it’s the most protected I’ve ever felt in a lightweight tent. Again, it’s tough to keep up with the journaling, as I keep falling asleep to the rain on the tent after a hard day of hiking.