*Note: As this post and the future ones come out over the next two weeks, I will be out of cell reception. Thanks to my good friend Julie for helping to release these journals each day while I’m out of cell reception. Know that I do eventually see all your comments, but on this hike, will not be able to reply in most cases. Thanks so much for all your support!

Today was HORRIBLE for me! I wrote much of this a day or two later because I was so drained. Apparently, I depleted all my reserves yesterday and had absolutely nothing today. Again, I could only get a few bites down of breakfast and was up multiple times last night with diarrhea. It took all I had just to get up and down the flight of steps to the bathroom overnight. I took few photos during the day and can barely even recall it. I know that normally, I would have enjoyed it, but I was barely making it with how depleted I was. We basically walked up the Tamor and Ghunse Khola River Valleys. 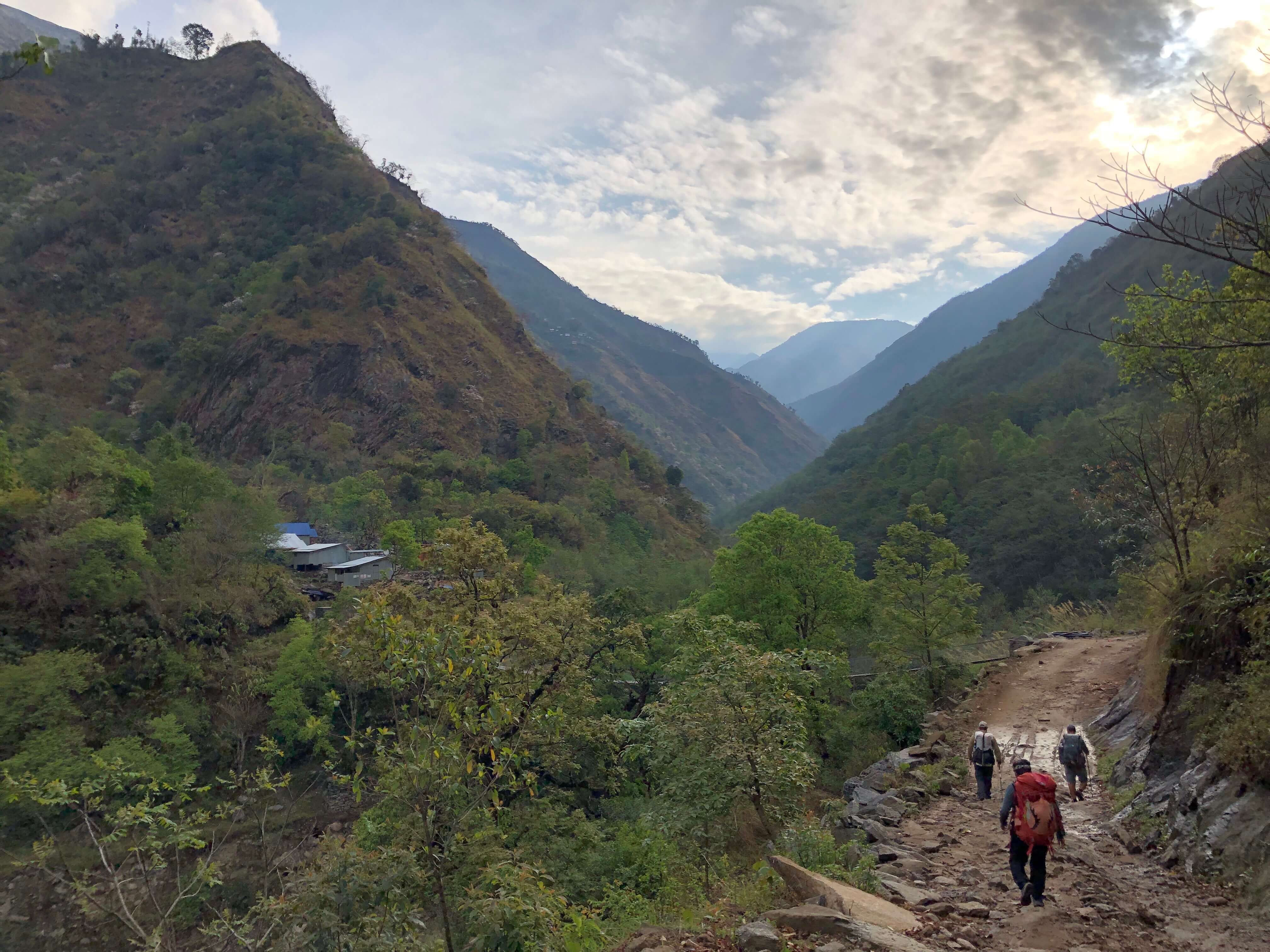 We ended up 3,800ft higher than we started, but that does not at all include the constant short steep ups and downs of the day. Much of the day was also on rocky jumbled terrain, so it was tough, slow, and draining. 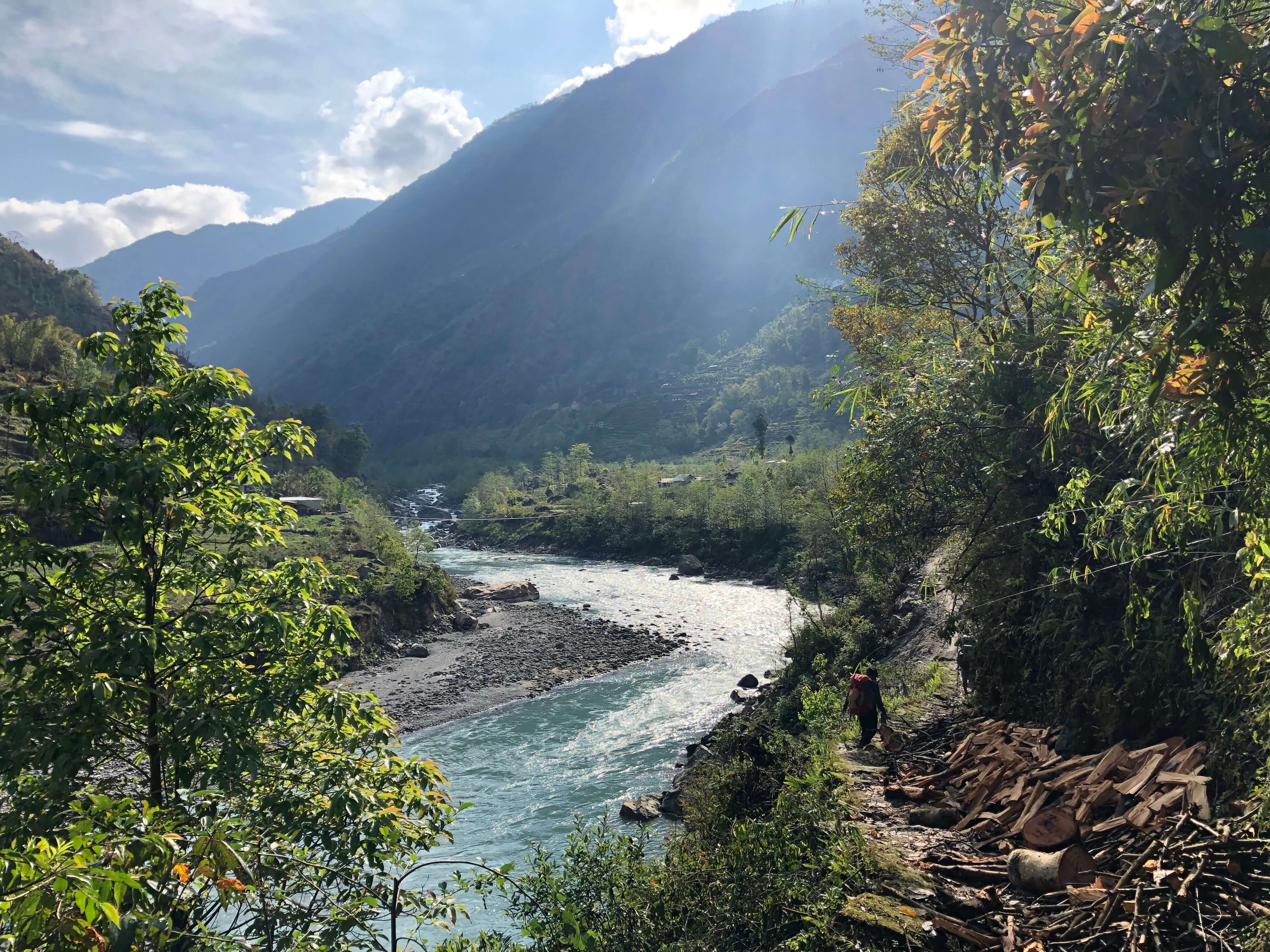 In the late morning, we passed the first conservation checkpoint in Taplethok. No one was manning it, so we kept walking across a suspension bridge. Then about 5 minutes later, a uniformed man walking towards us stopped us to see that we had a guide and permits. As expected, we also needed to pay $20 for the conservation permit, but he needed us to walk back over the suspension bridge. With how I was feeling, that felt insurmountable. Griggs and Kishor went back while Buck-30 and I walked up slowly and took a short break. Our calves were really sore after all that downhill with the heavy packs yesterday. So sore! 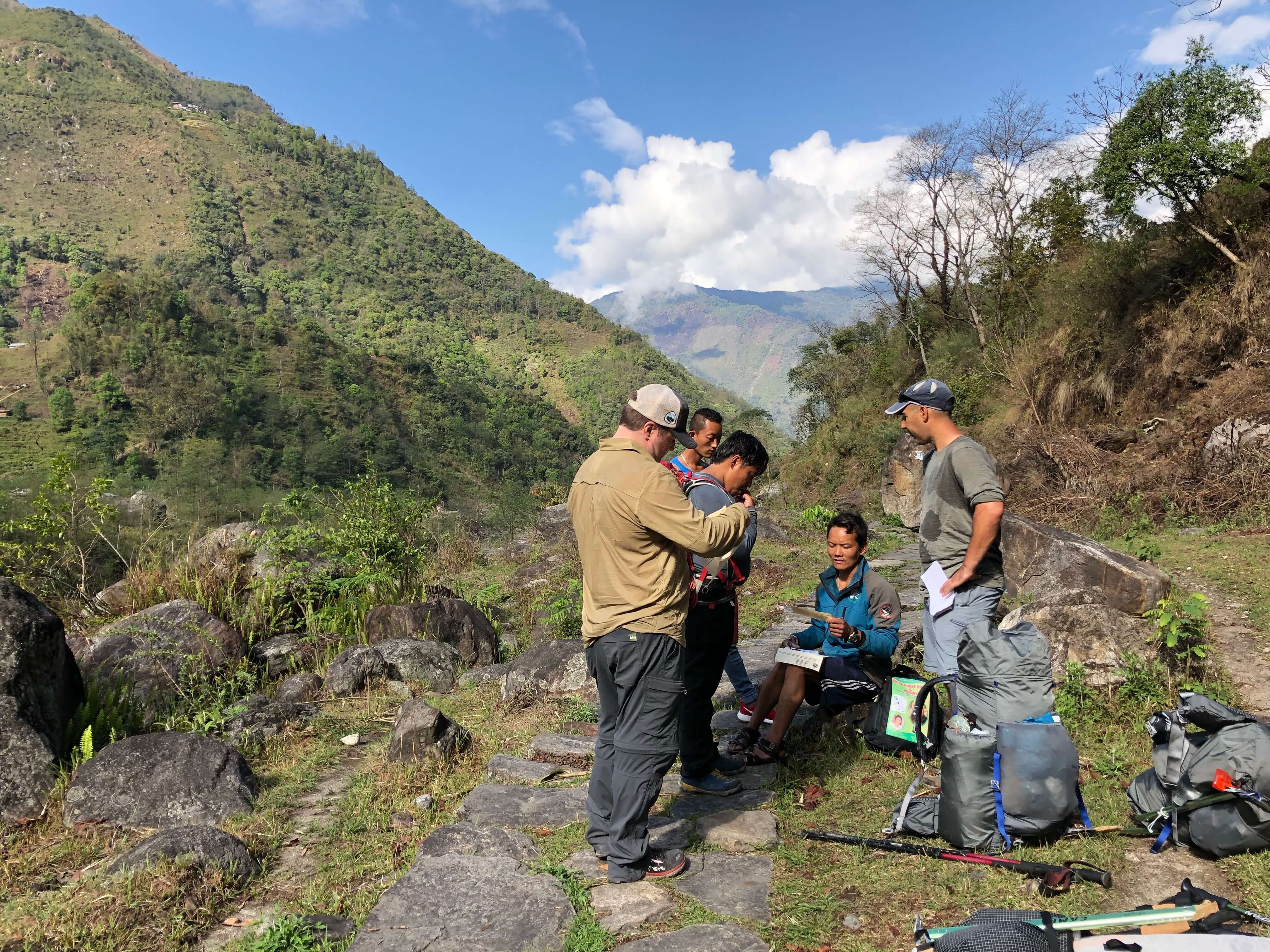 Getting stopped for the permit check. 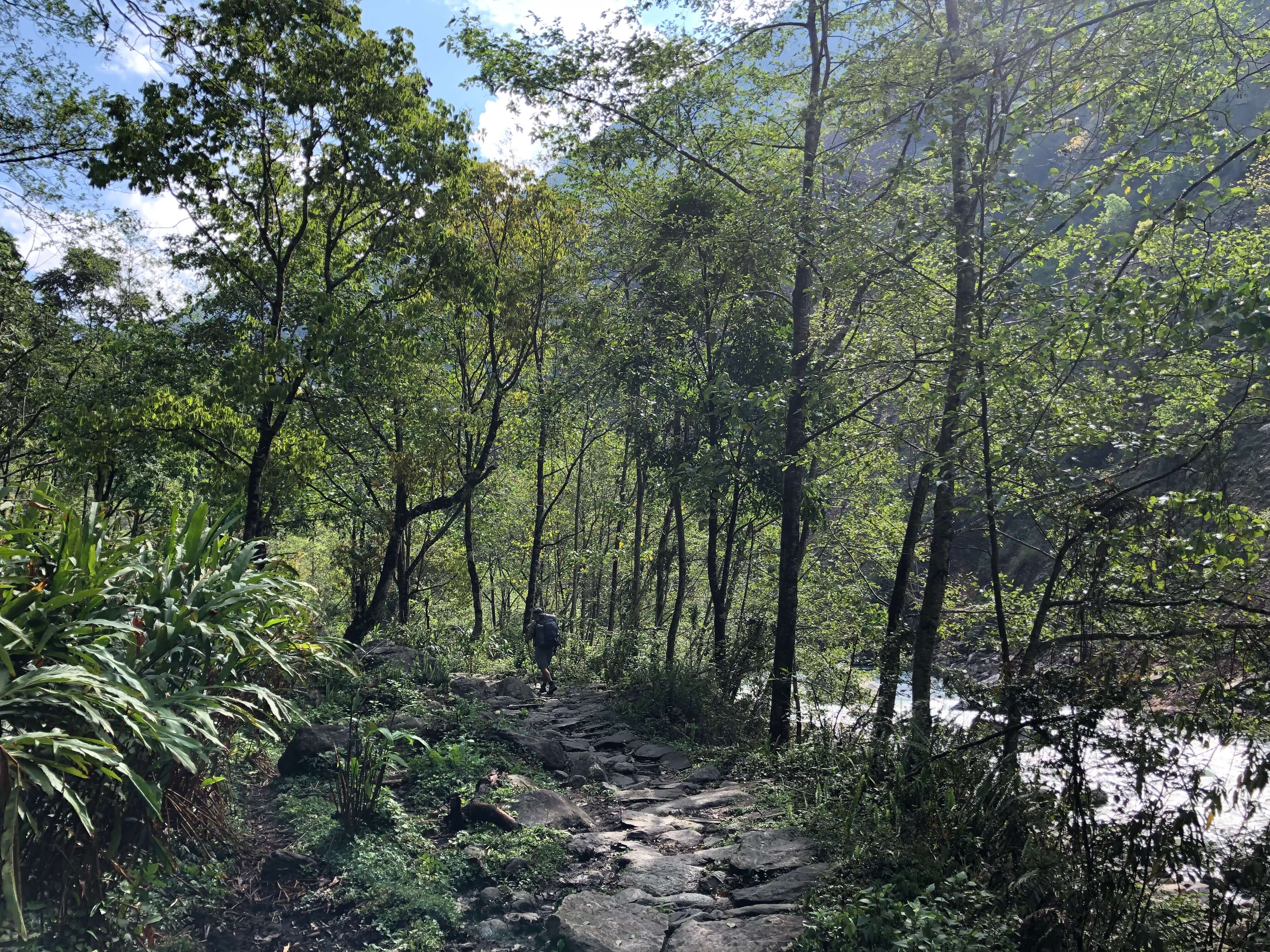 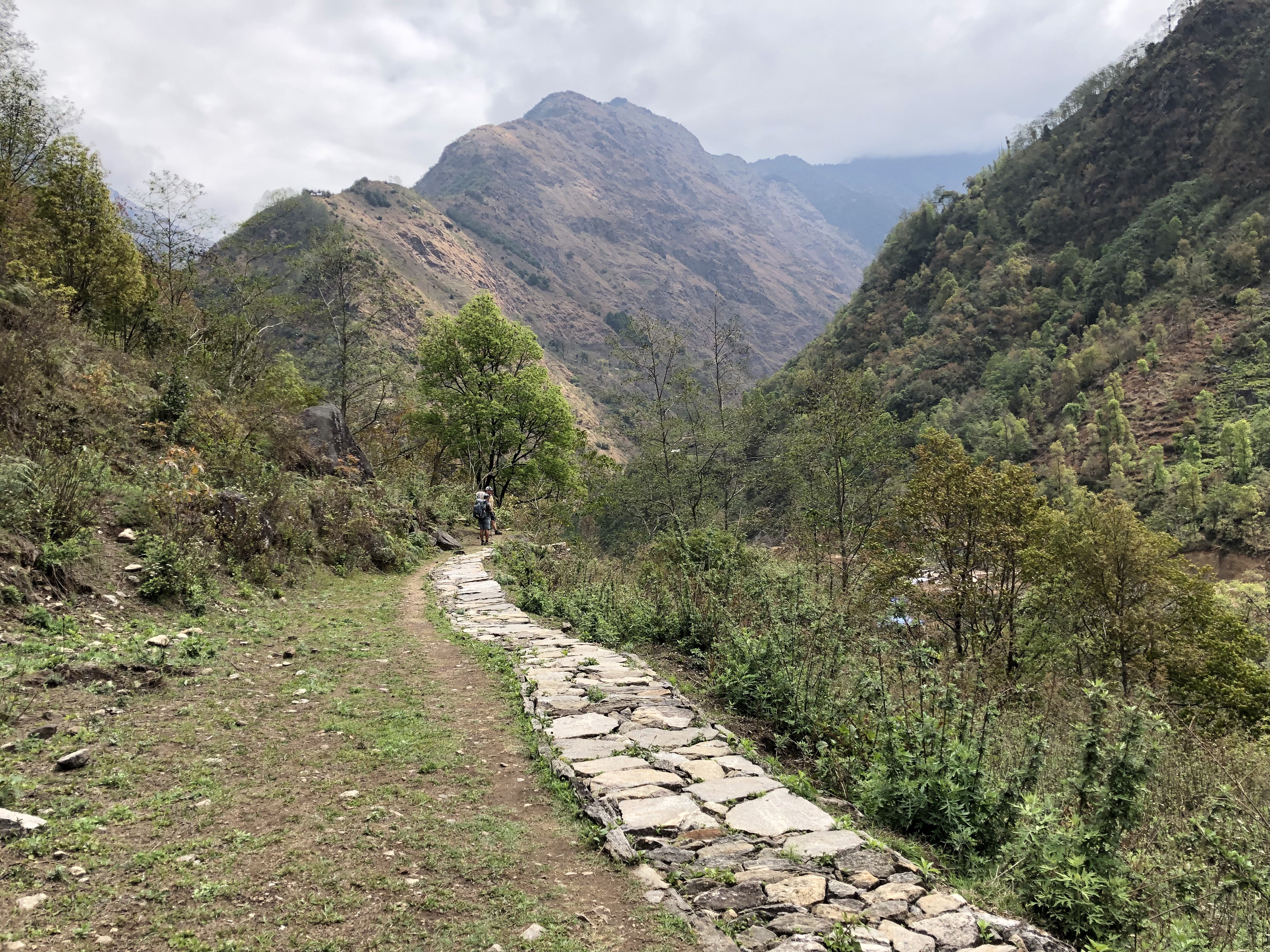 We had lunch in Sukathum, and it was quite wonderful, but I couldn’t even hardly sit in a chair I was so exhausted. I expressed my concern to the guys that I was running on empty and that I really was feeling dangerously close to pushing myself too far. I was worried I wouldn’t be able to make it through the next section to our evening destination. I seriously felt like each step I was taking was the last one I could take. I was woozy all day and concerned I’d just fall over at some point. I actually got some noodles down for lunch. 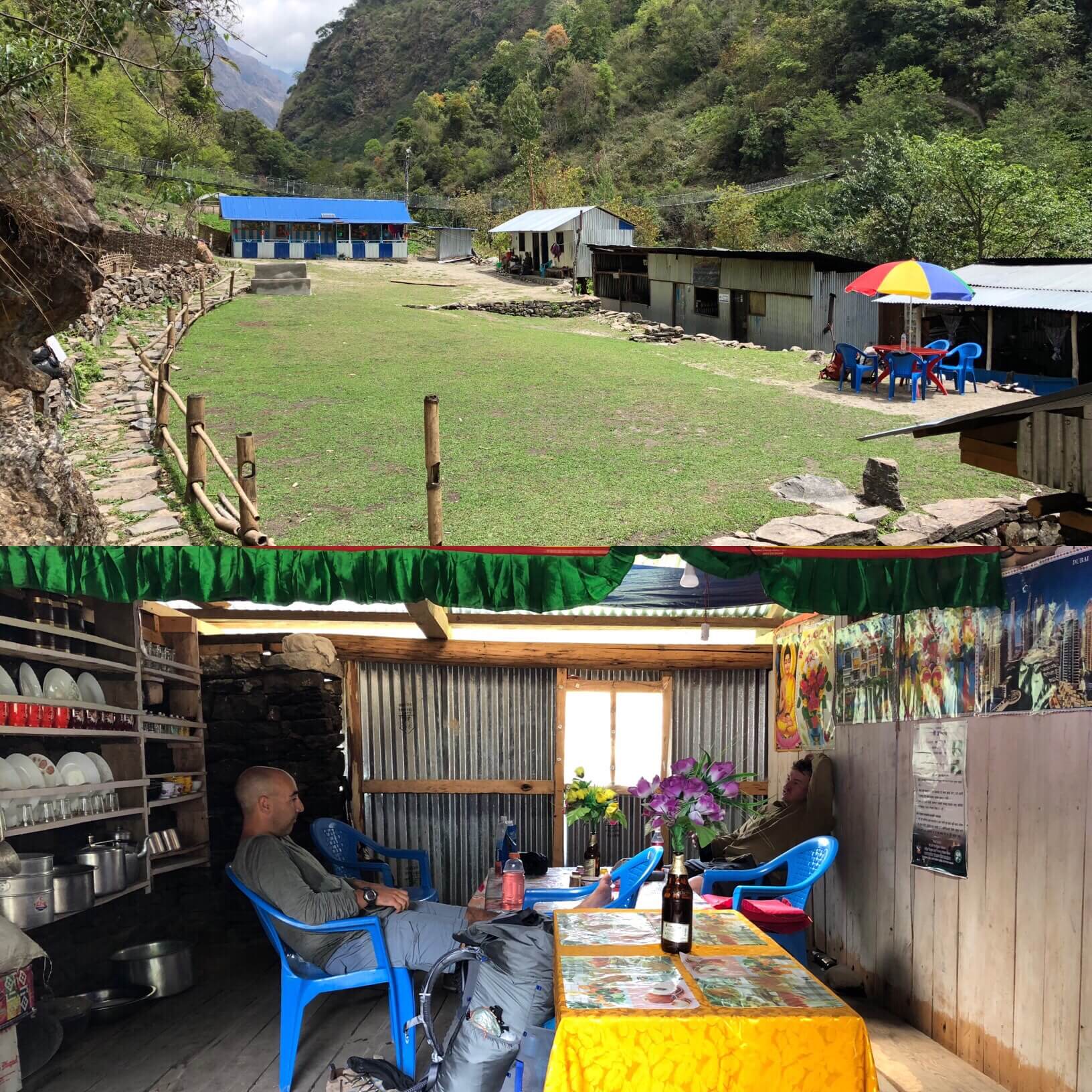 Our schedule with Kishor does not allow for a day off. He has another job immediately after this, and we are pushing it as it is. I just need to make it to Ghunsa tomorrow. That’s where we have a planned zero (with maybe an acclimatization hike) to acclimatize. Kishor has kindly been hiking right behind me and sees the difference from yesterday. He offered to carry some of my weight to get us through the second half of the day. He’s carrying 24lbs/9kg. My immediate reaction was, NO WAY! My thru-hiker pride would never be able to let anyone carry even an ounce of my weight. We discussed it, and I agreed I just needed to do it to make it this second half of the day and I really was pushing my limits. Kishor became my porter and took my 15lb/5.6kg food bag. It took so much for me to let him do that and I paid him extra. It made a ton of difference and we were able to make it to Amjilosa. 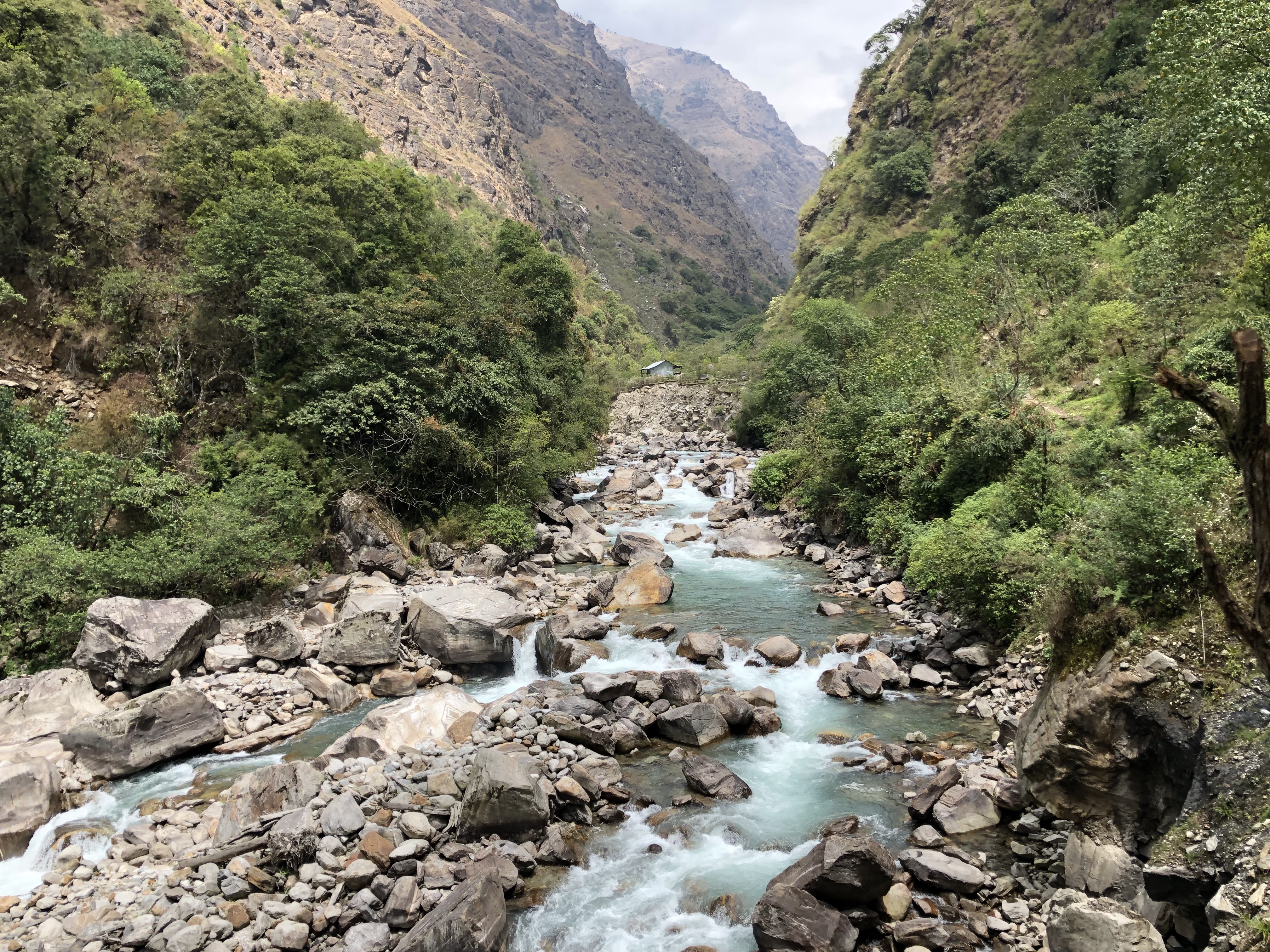 The final climb was some crazy steep switchbacked climb straight up from the river. At the bottom, Griggs’s said he saw two monkeys shoot off into the brush. On the way up at the start of the climb, we crossed paths with a woman with maybe a 6 month old baby in a carrier and a quite elderly woman. They were also going up carrying some things they had harvested and also herding some goats along the way. They kicked our ass going up that hill for what had to be an hour at least. It was quite humbling! It’s just a different way to look at these trails. They aren’t there for hikers, but this is how people live out here, get their food and live off the land. This was just a regular day for them. The woman with the baby didn’t need a diaper bag, pacifier, sunscreen, or hat. Just her sandals on her feet and a sling to carry the baby on her back while she would scramble around herding goats and the grandmother too. Just scrambling up that hillside chasing a goat and then right back on the trail needing to pass us. 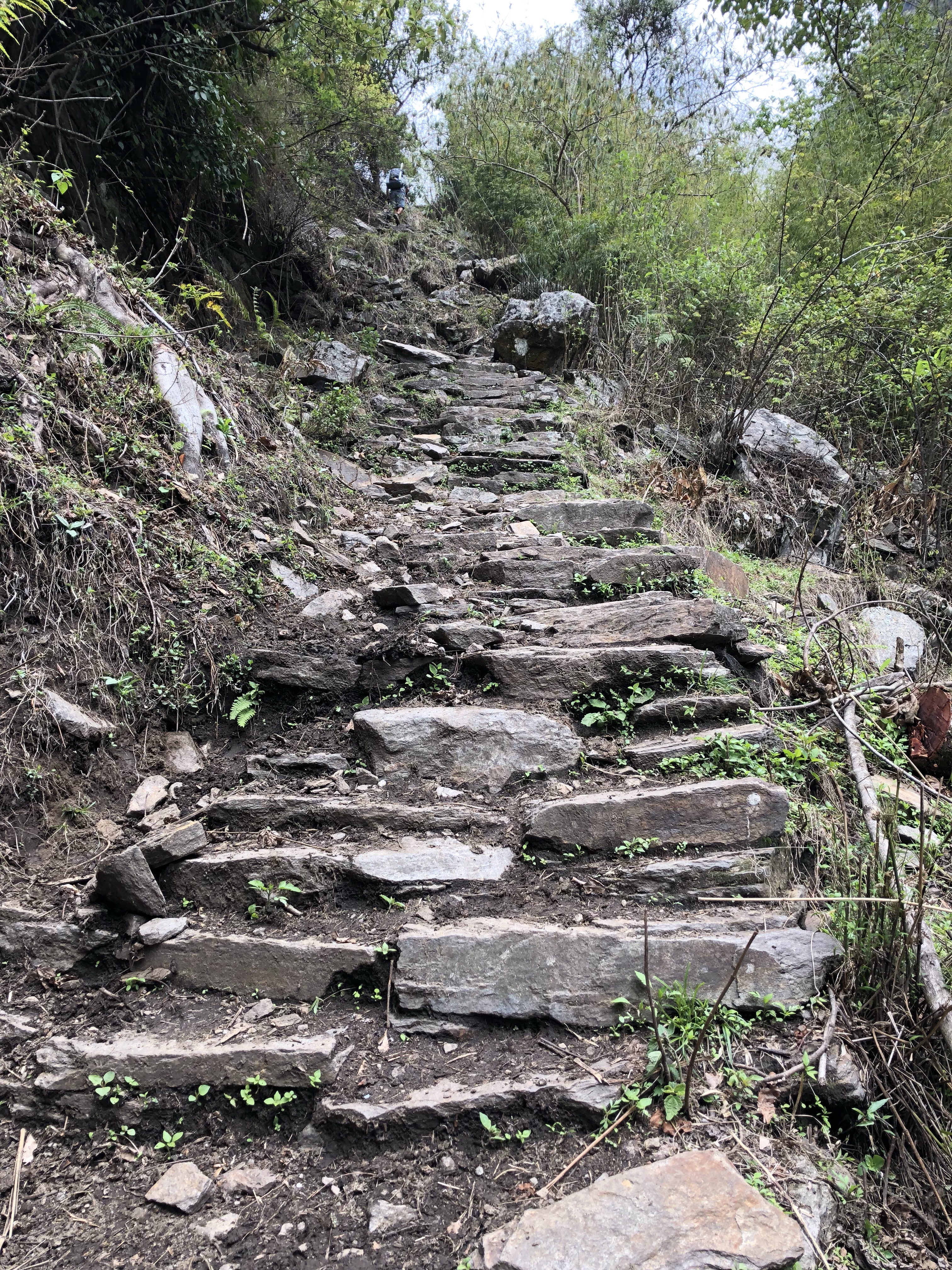 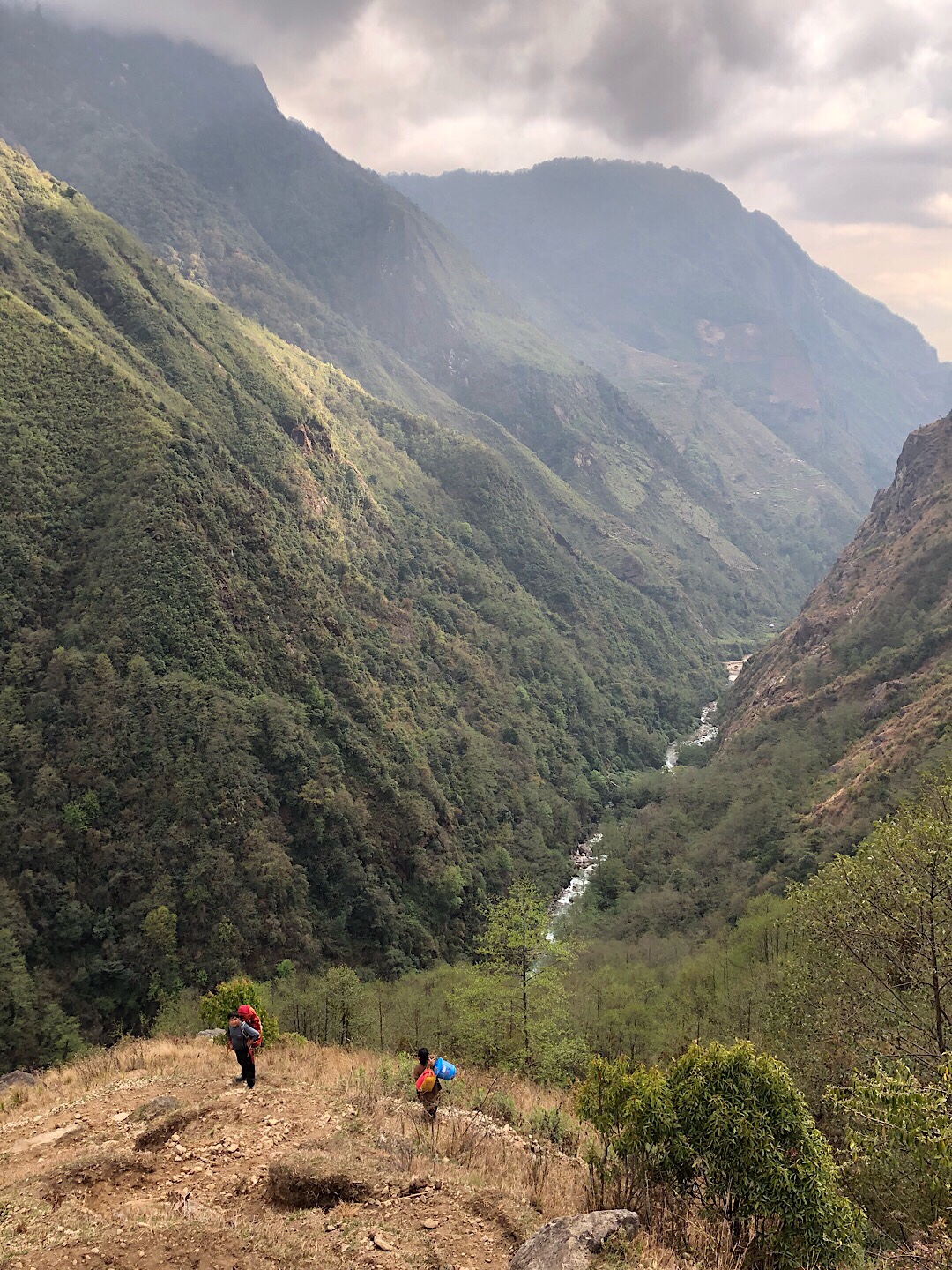 Overall, we did the estimated 11.5hrs of hiking in 9.5hrs…the guys would have been at least an hour faster without waiting on me. Buck-30 is getting his breaks though, so there’s a positive of my depleted energy. 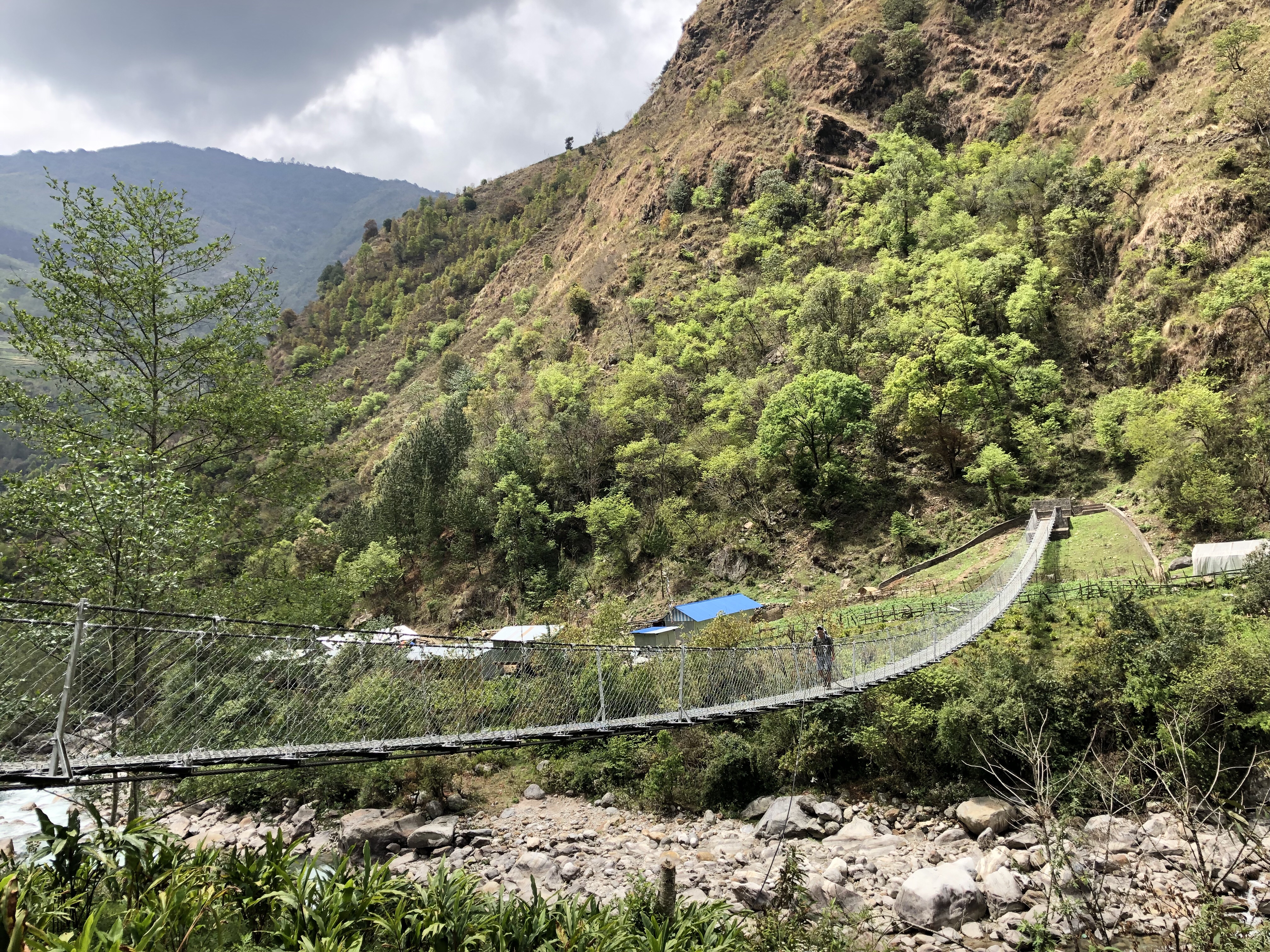 I was feeling surprisingly better once at Amjilosa. We each got our own room, which is basically a quadrant of one space as we can hear every word and movement as if we are in the same room. Still, we like having our own space, and with no one else around, we will take that option. It’s a strange request when we arrive as they would prefer us all in one room, but it’s for our own sanity to get it while we can. It’s only about $2/night and dinner tends to be around $2 as well. Pretty unbelievable. 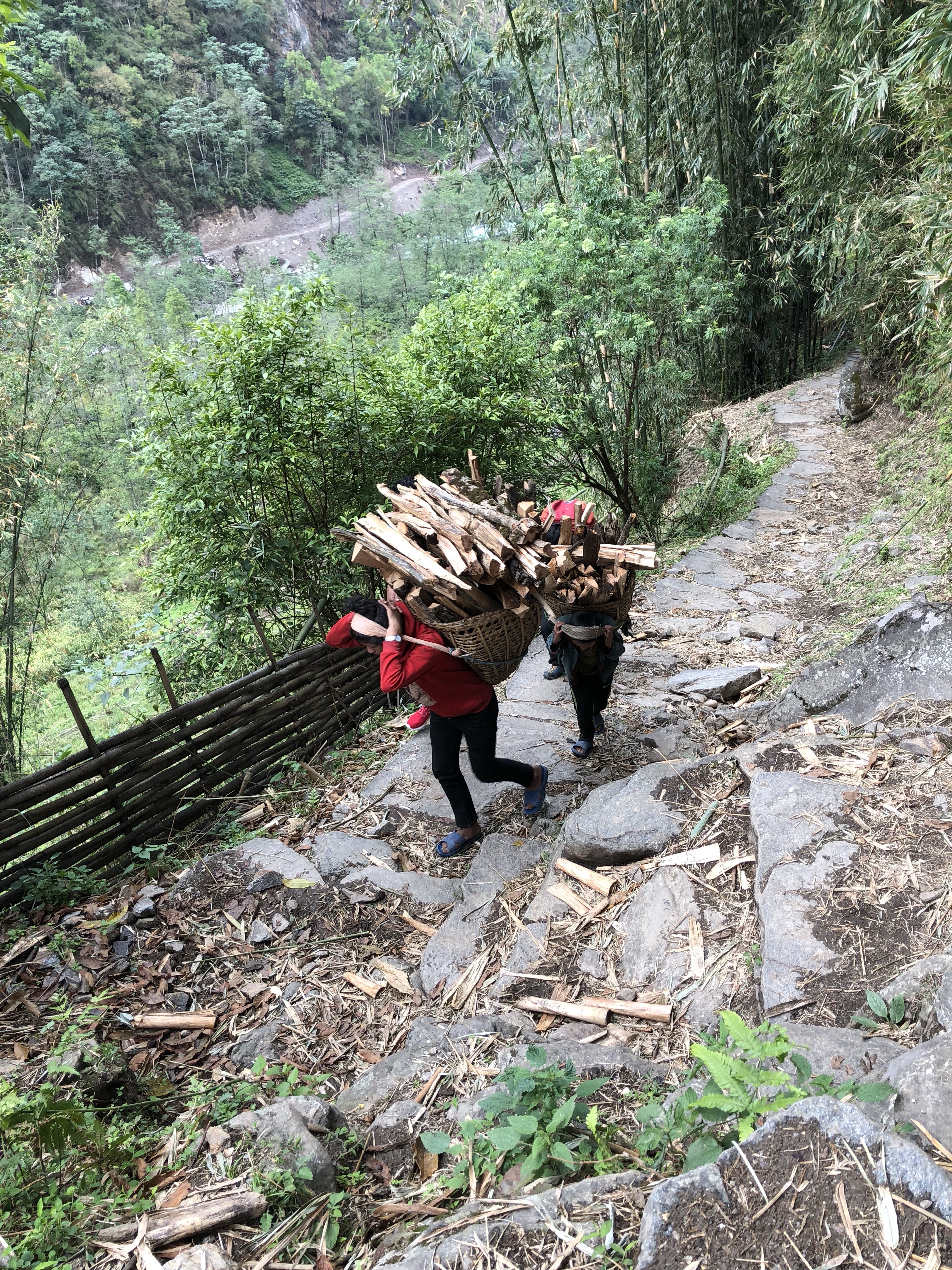 Griggs had chicken with his dal bhat and the actual chicken in his meal was so fresh that it’s remnants were hanging above us as we ate. I tried some noodles, but they were fried and quite greasy, so I got some rice down. It’s an improvement. Since I’m still having diarrhea, I’m caving and taking Ciprofloxacin over the next 3 days. I had brought Flagyl, but Griggs had Cipro which seems to match my symptoms better. I crashed so hard at like 7:30pm and couldn’t move or even feel coherent if I woke during the night. I was totally out of it. This blog entry was written days later!