This was so definitely NOT our day! We decided to sleep in and start an hour later today. We all could use the extra rest, it’s pretty darn cold up here, and we figured we’d make it over our high point for the day, Cho La Pass (17,552ft/5350m), in the morning before the clouds rolled in. Well, as we were packing up this morning, Buck-30 let us know he spent most of the overnight with diarrhea and vomiting. No! Not again! Is it always going to be one of us!? This is a terrible time to have it. We have two days in a row of passes over 5000m/16,400ft, and then we have two of, quite possibly, our most stressful days; up and over the technical pass of Tashi Labsta, our highest point of the hike (18,898ft/5760m). Buck-30 has the strongest stomach of all of us, and tends to rebound within a day, so he wanted to try to continue on and keep our schedule. We have arranged to meet our Tashi Labsta guides in Thame in two more days. 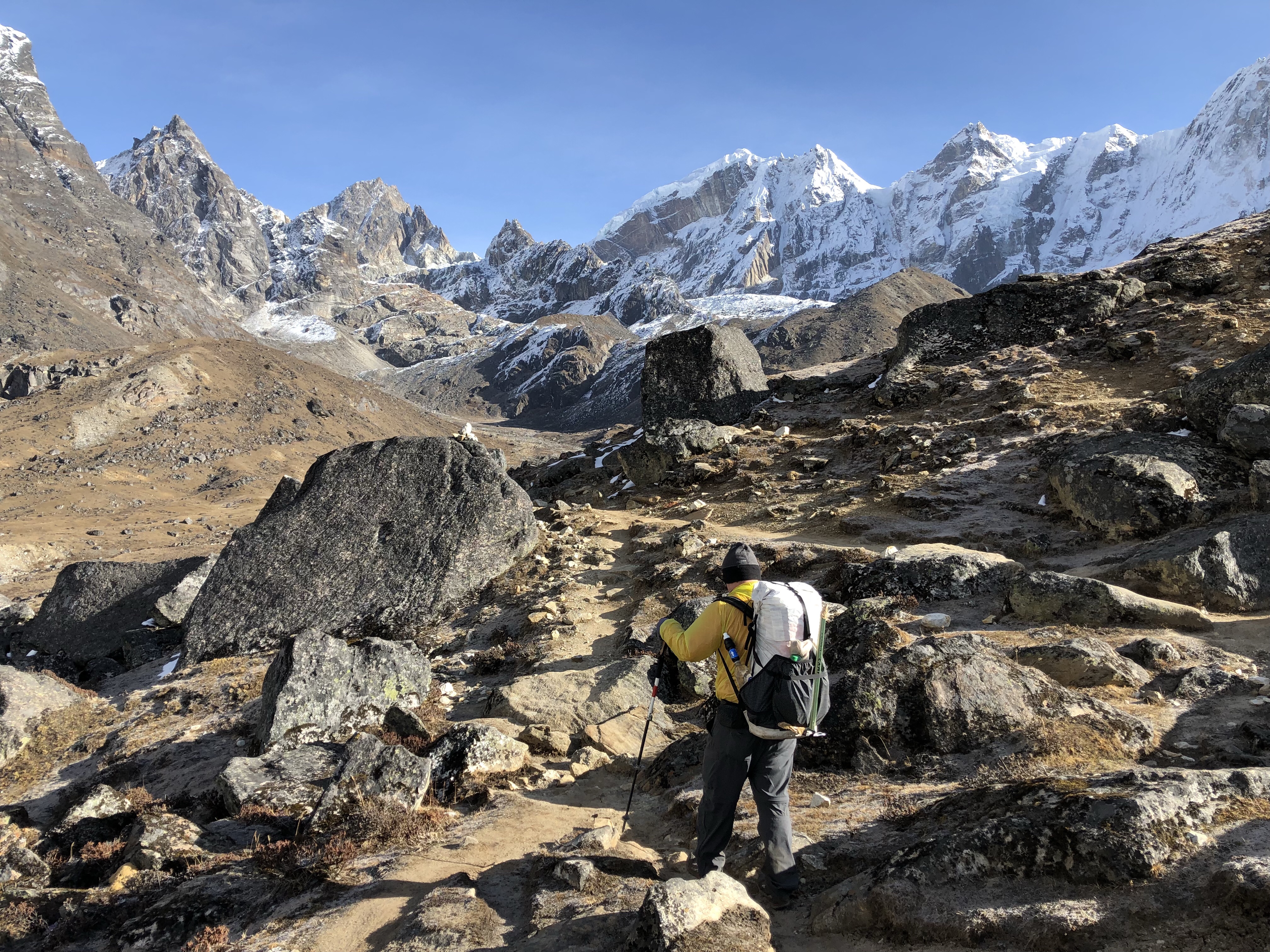 Heading up to Cho La Pass.

Our pass for the morning, Cho La Pass, was not too long, so he hoped to just get it over with, and the rest of the day would be easier. Hiking up to 17,552ft/5350m is exhausting under any circumstances, but to be sick like that is just torture. I’ve given permission to give details to give an idea of what it’s like to be sick out here away from home. Buck-30 started out in the middle of the night using the squat toilet, the common ground level hole most places have. Diarrhea is horrible with those. No rim to catch it. Buck-30 wasn’t expecting it and said it went all over the wall and even on his shoes. Those small stalls are already disgusting, but to splatter all over the wall. Thankfully, they have a bucket and hose in them usually, and he got to clean up. Then he realized there was a toilet with no seat in another stall and moved to that but still couldn’t sit. Those splash back on you and he said vomiting in it was so horrible.

Buck-30 made it about 45mins into the day when he had to pull over and finally vomit all he had eaten yesterday. He didn’t admit it at the time, but he vomited so hard he sharted in his pants. He told us he had to use the bathroom right after, but really just needed to clean up. What a way to start the day. He later, under better conditions admitted it and thought it would be a truthful blog story of what now all three of us have had to hike through with stomach issues out here. Griggs and I each took half his food to alleviate some weight from his pack (4lbs/2kg each), and we inched up going at the pace Buck-30 needed. 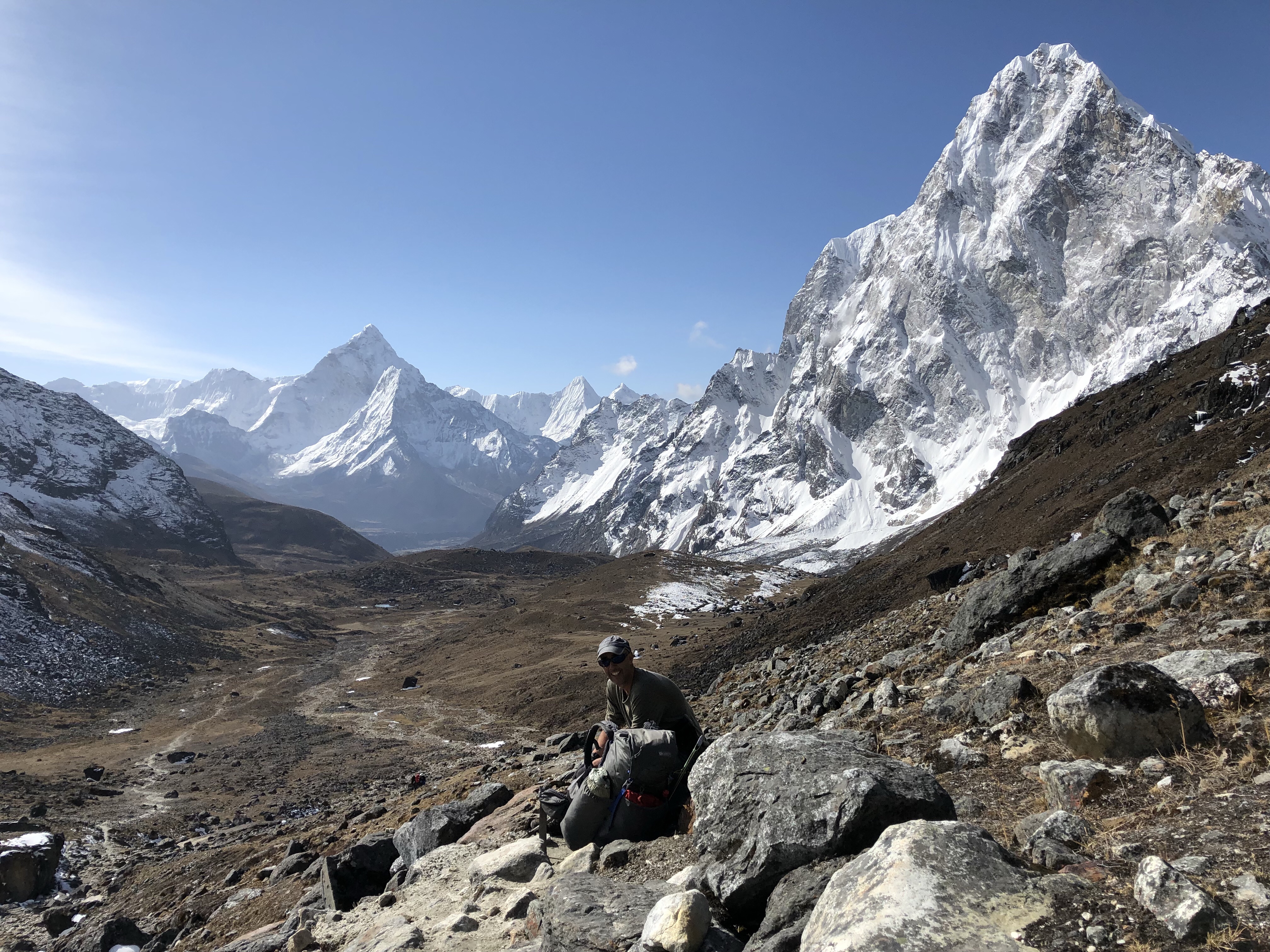 Plenty of breaks for us today to take in the great views as Buck-30 somehow inched his way up over the 17,552ft/5350m Cho La Pass.

Somehow, Buck-30 was still making ground on some groups as we headed up. He didn’t feel like it, but he was doing amazingly. Just stopping a lot when he was understandably woozy. As we went up, we overlapped with a woman named Helen from the UK with a guide and porter. We got to talking and told her our route started almost a month ago at Kanchenjunga Base Camp. She enthusiastically replied that her father was the first to ever summit Kanchenjunga Mountain, the 3rd highest mountain in the world, in 1955. What an amazing coincidence! Had Buck-30 not been sick, we never would have met her or had that conversation. Really amazing how small this world is. 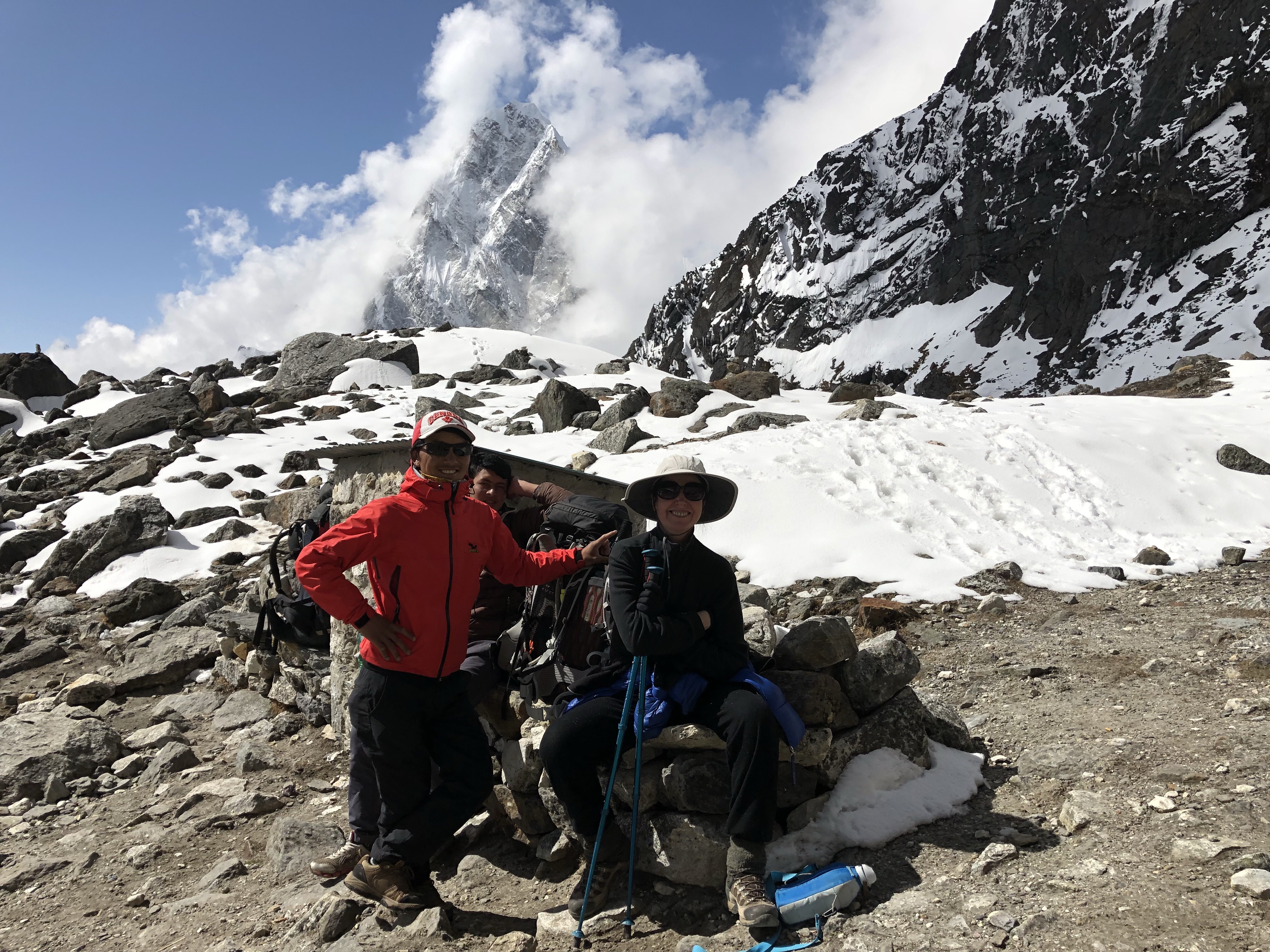 There are times when traction devices would be wanted going over Cho La Pass. It was borderline today. If I had microspikes, I would have used them on the snow and ice covered rocks. However, we only have crampons that were far too long for the thin layer of ice and snow. It wasn’t too sketchy, and we were just careful. 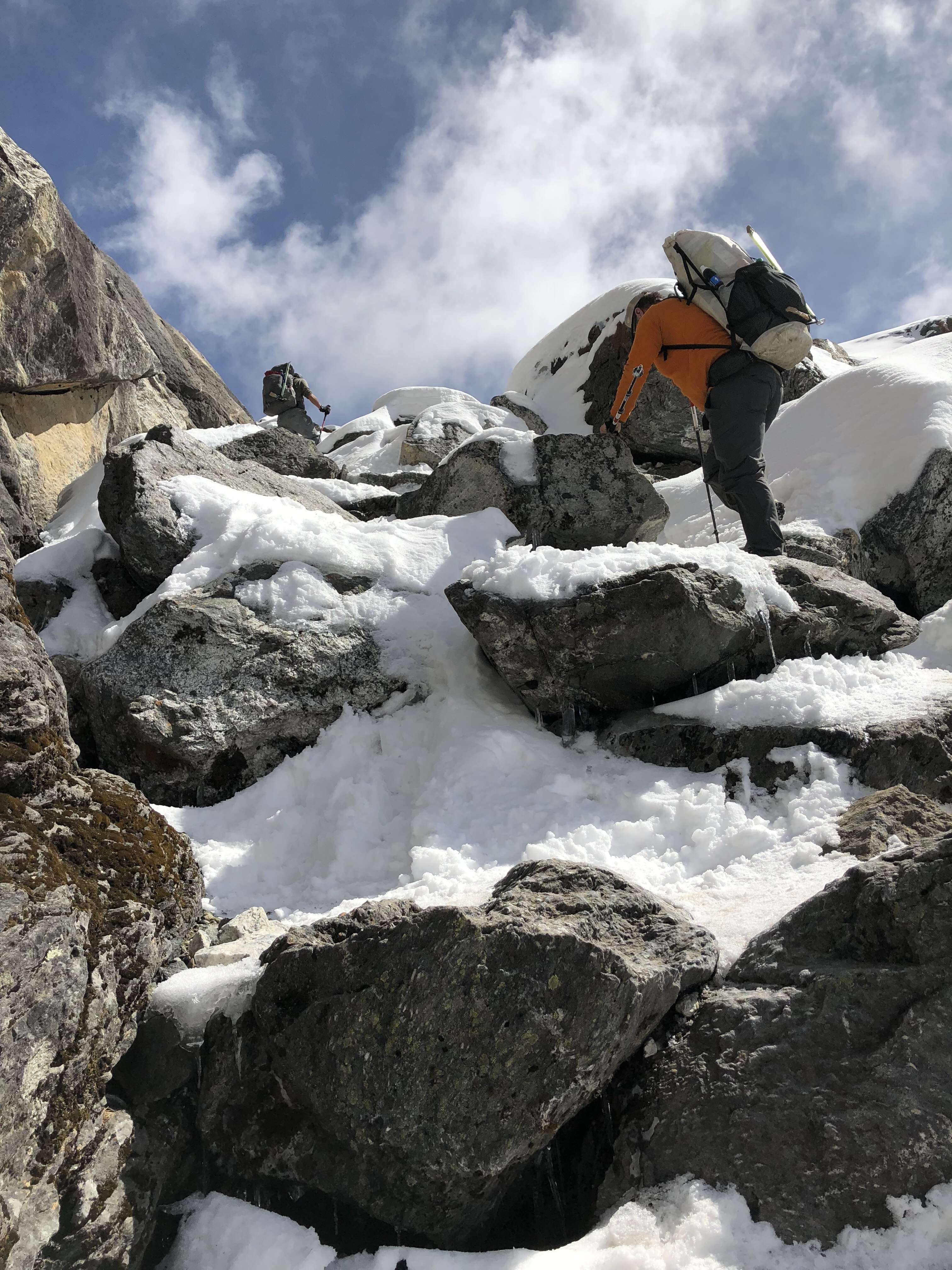 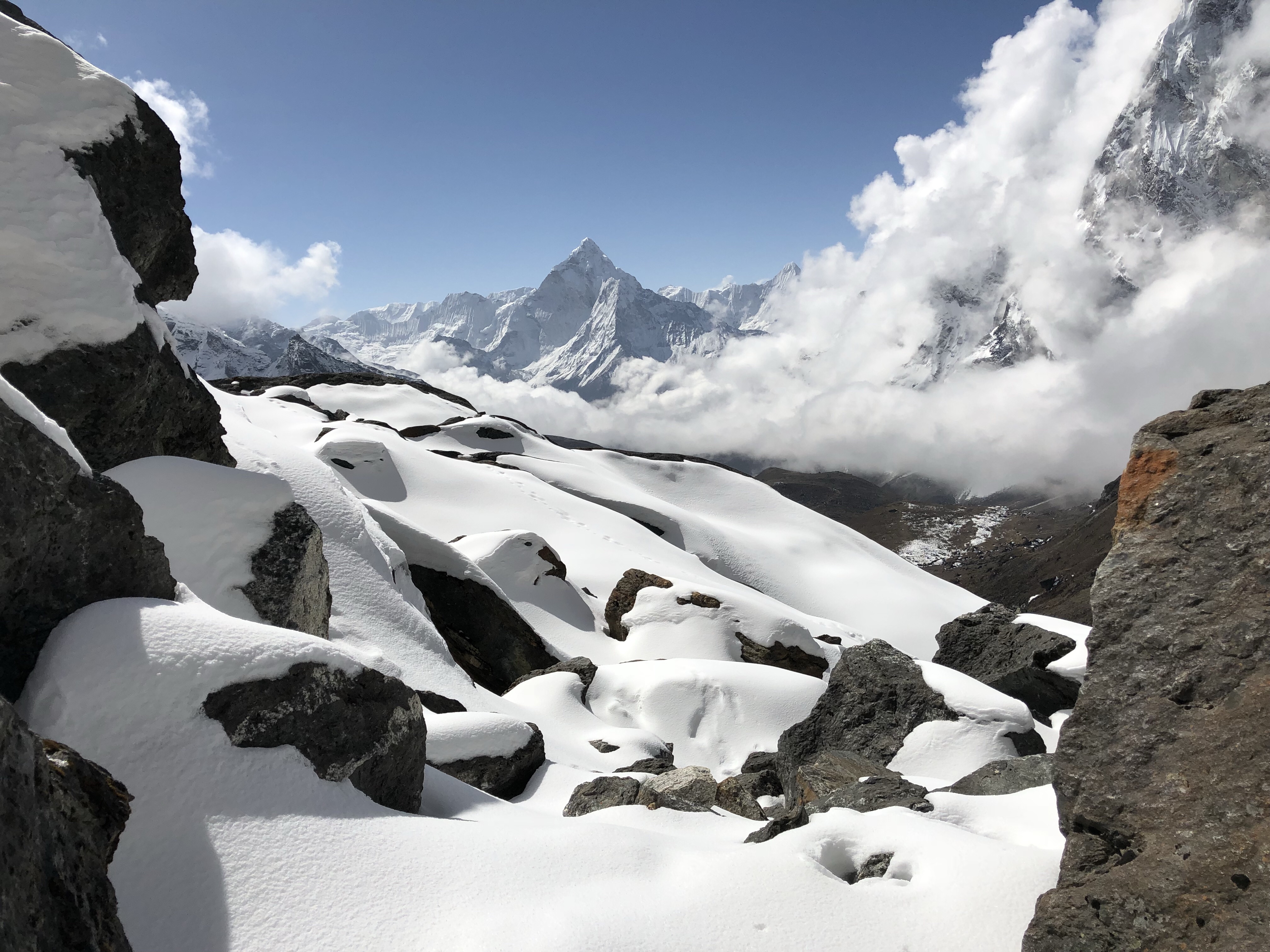 Porters were coming over using micros and carrying huge duffle bags of gear for trekking groups without using hiking poles. Very impressive. The final stretch plateaued some, and it got easier. Buck-30 was now understanding the total depletion and exhaustion of hiking with this stomach stuff. At one point, on the plateau, as we neared the end of the climb, Buck-30 said he was glad to be wearing sunglasses to cover the tears welling in his eyes. He isn’t a crier, but said he was just getting super emotional with how completely exhausted he was. 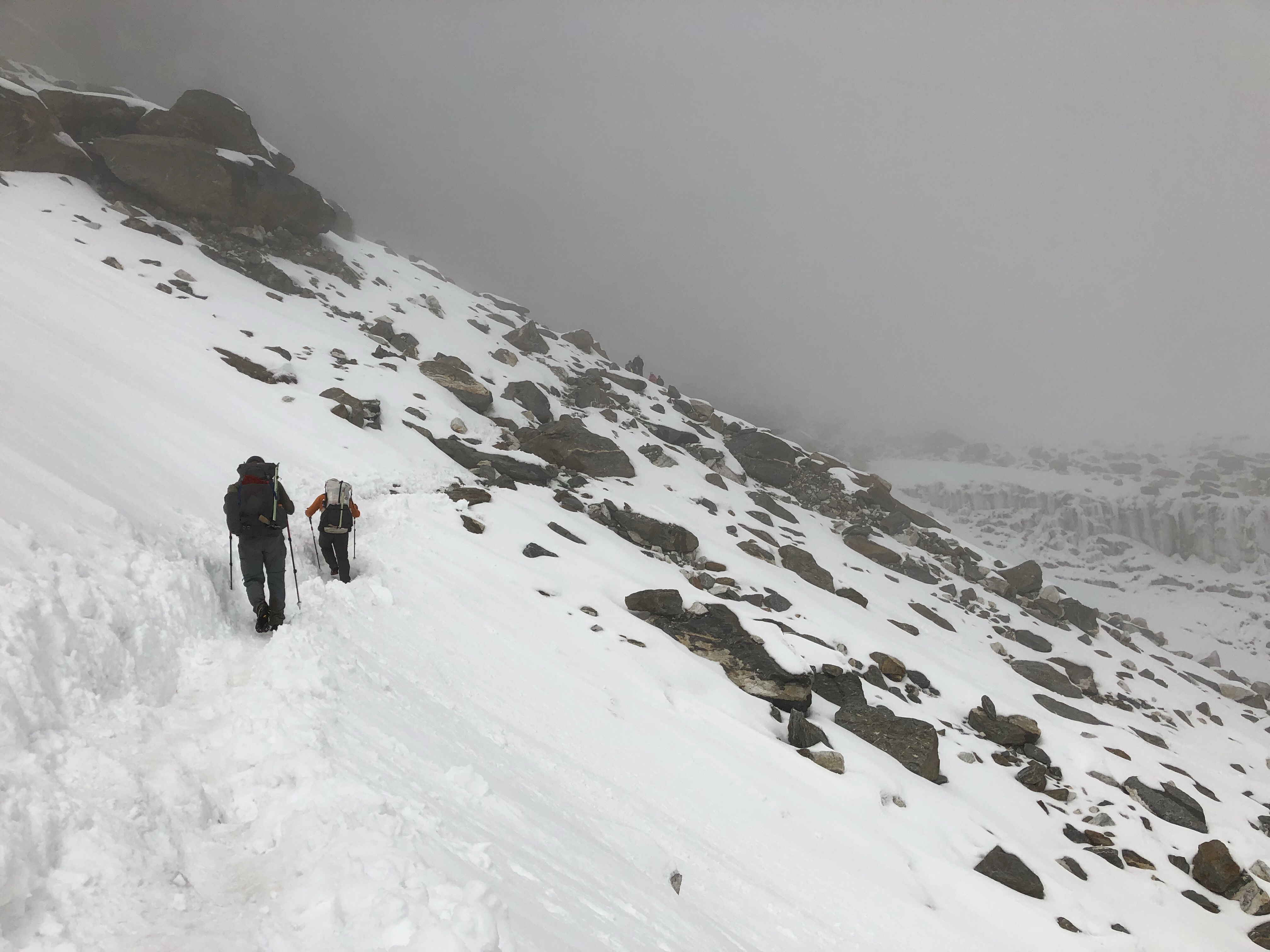 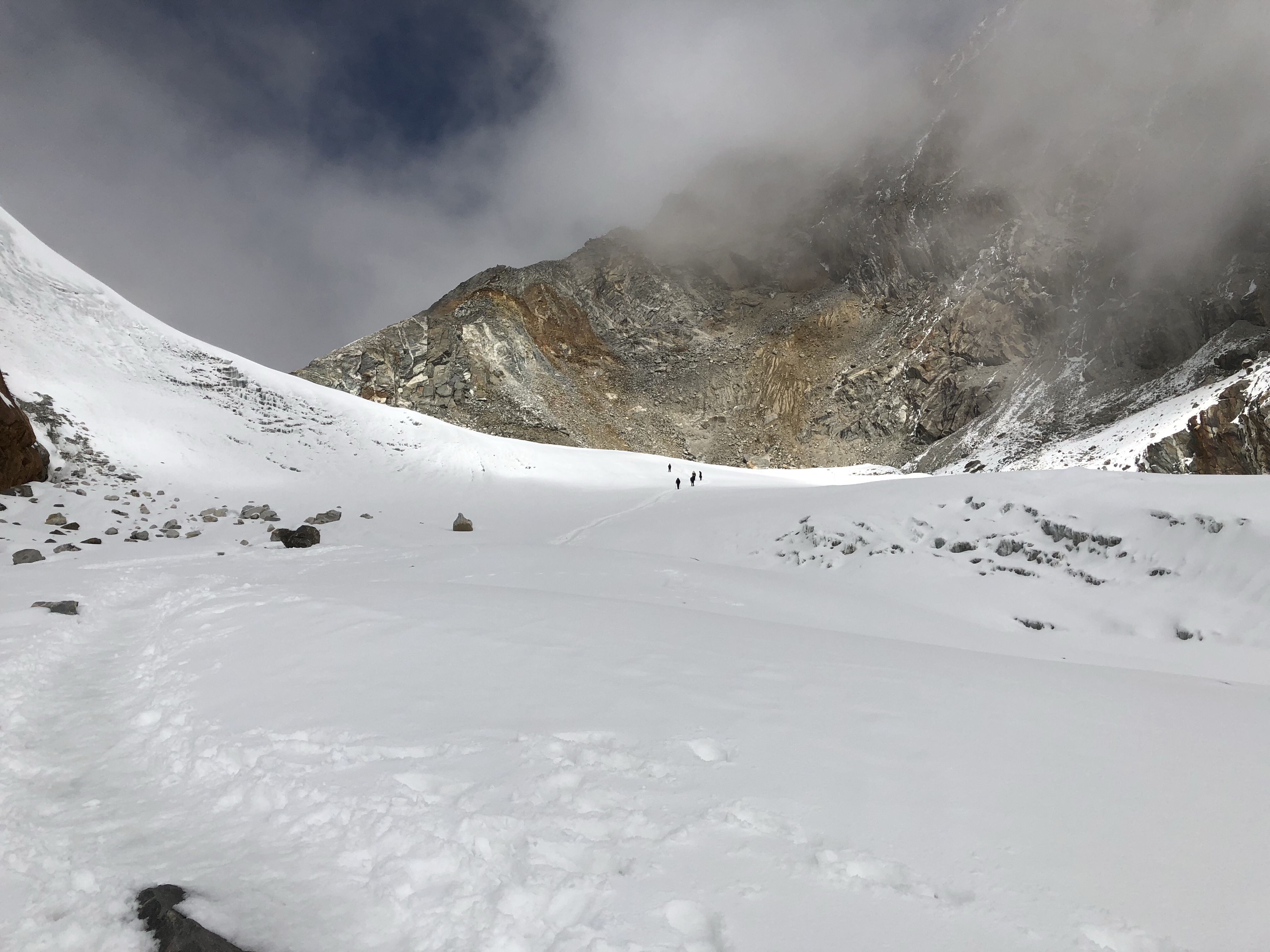 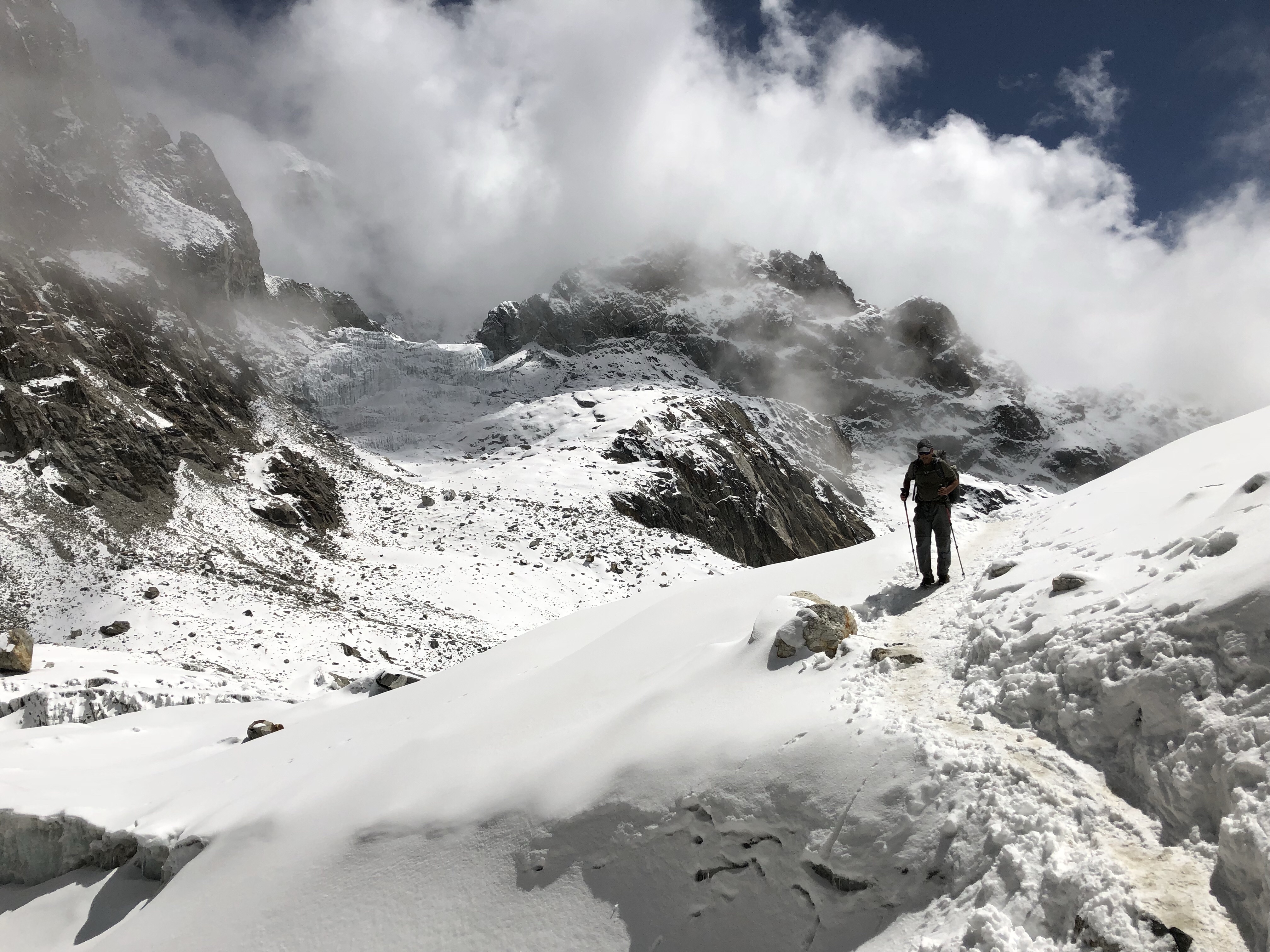 After 3hrs 15mins, we made it to the top. The book time was 2hrs 30mins. We normally would have done that climb in 2hrs or less. Poor Buck-30! It’s amazing he powered through. 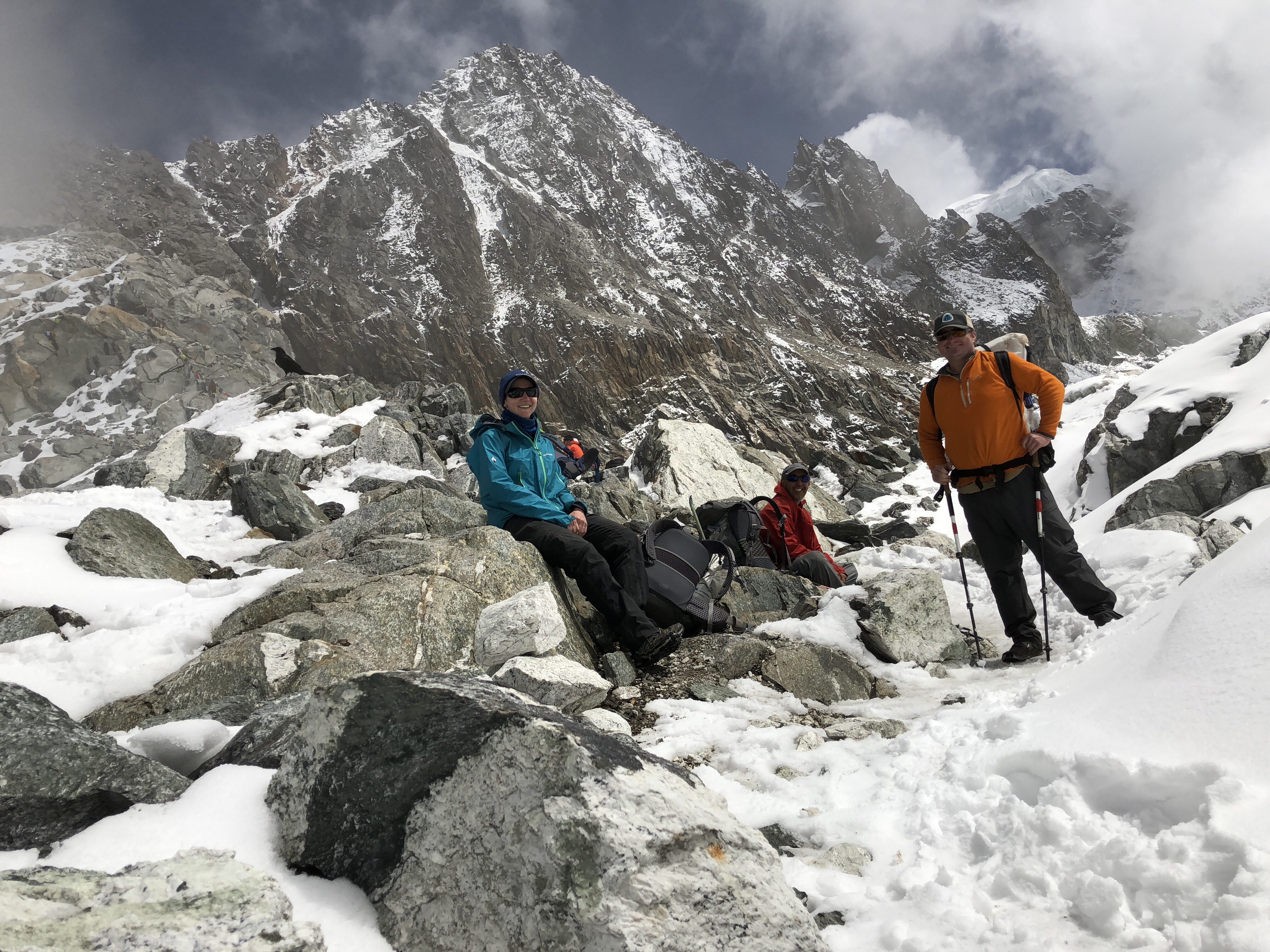 That was just the beginning. We still had quite the downhill to tackle to Dragnag and then a glacial moraine to cross to get to Gokyo as planned. That was 5.5hrs more in the book time. The downhill was steep and snow covered rocks that were often slick and icy due to all the people crossing. At times, it was a traffic jam, as there were hiking groups to work through going both directions. Notice the ant line of people in the distance in the photo below. Again, we were borderline on bringing out the crampons and chose not to use them. 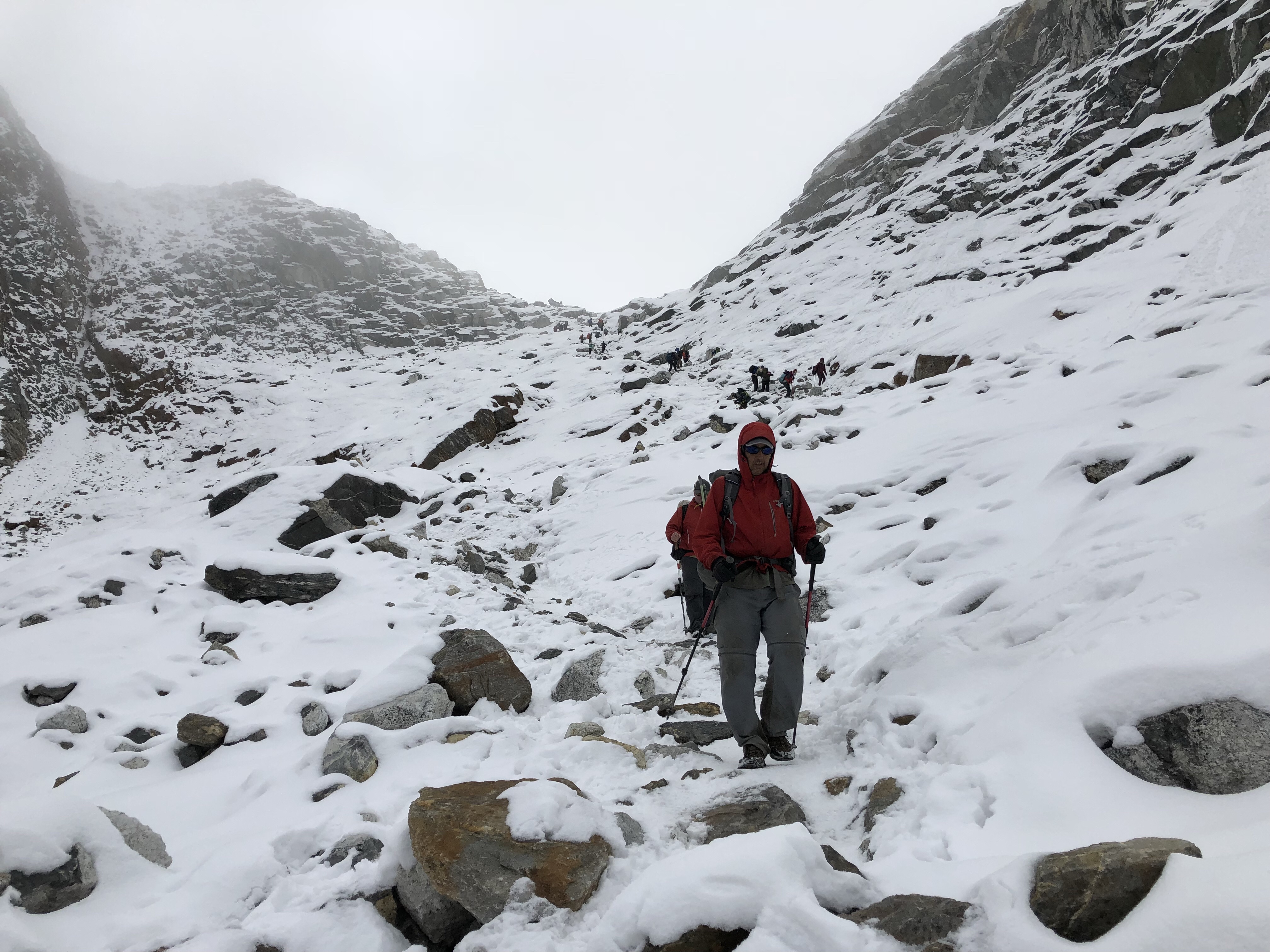 We needed a backup plan. We decided we needed a zero day to recover. All of us were not doing great, and could benefit from a day of rest. We have few buffer days, but this is what they are for. With what’s coming up, we need to be rested and let Buck-30 recover. If we made it the 5hrs or so to Gokyo, it would be a great rest spot, and I could go up the side hike of Gokyo Ri on the zero day to get one of the most liked views of Everest. 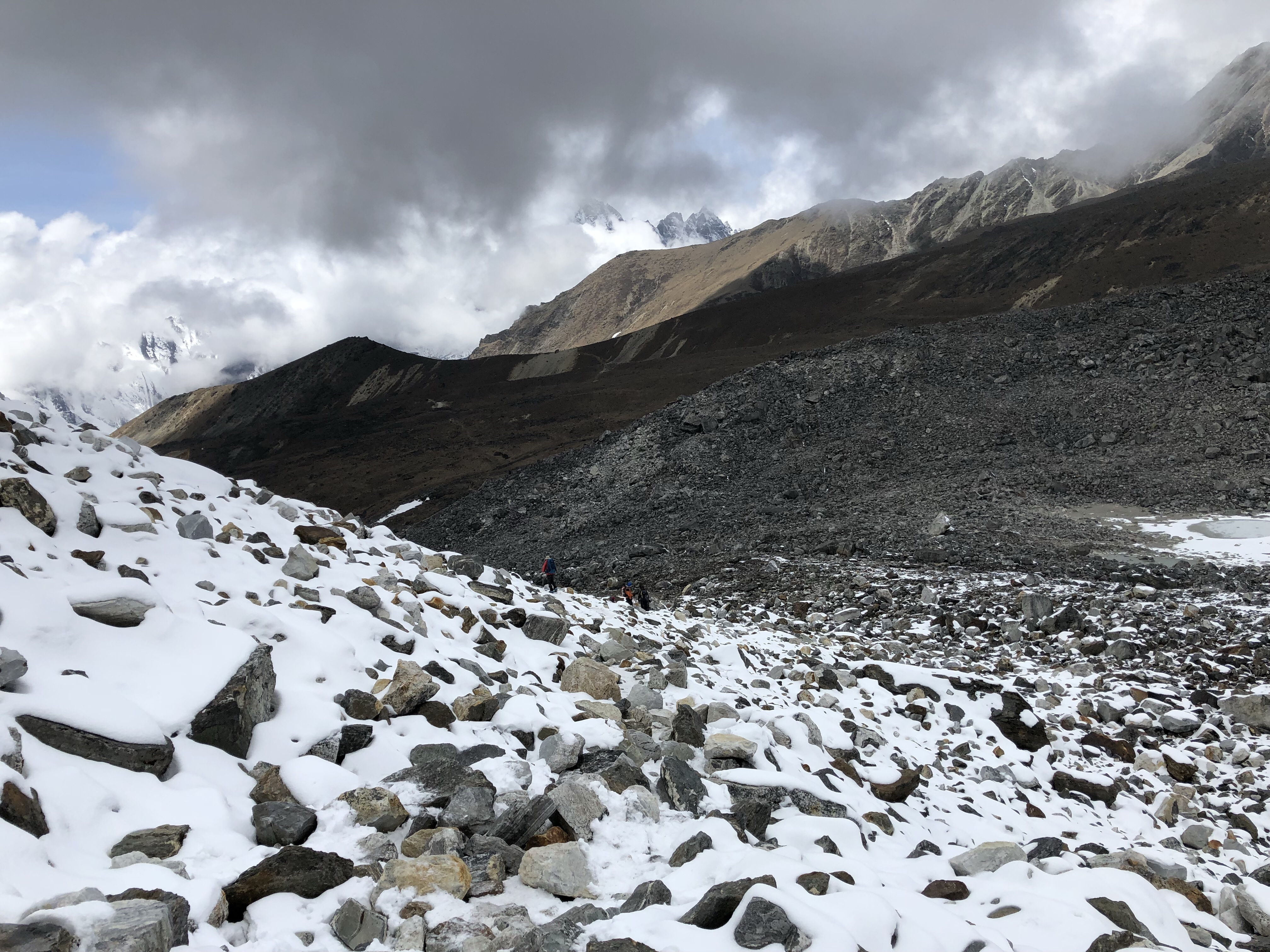 As we got down, I was able to use my inReach to message the guide company owner in Kathmandu that helped arrange our Tashi Labsta guides. He claims he was able to reach them and tell them to meet us the day after tomorrow instead of tomorrow. Yay! That was our main reason for staying on schedule today. That was a huge relief for all of us! 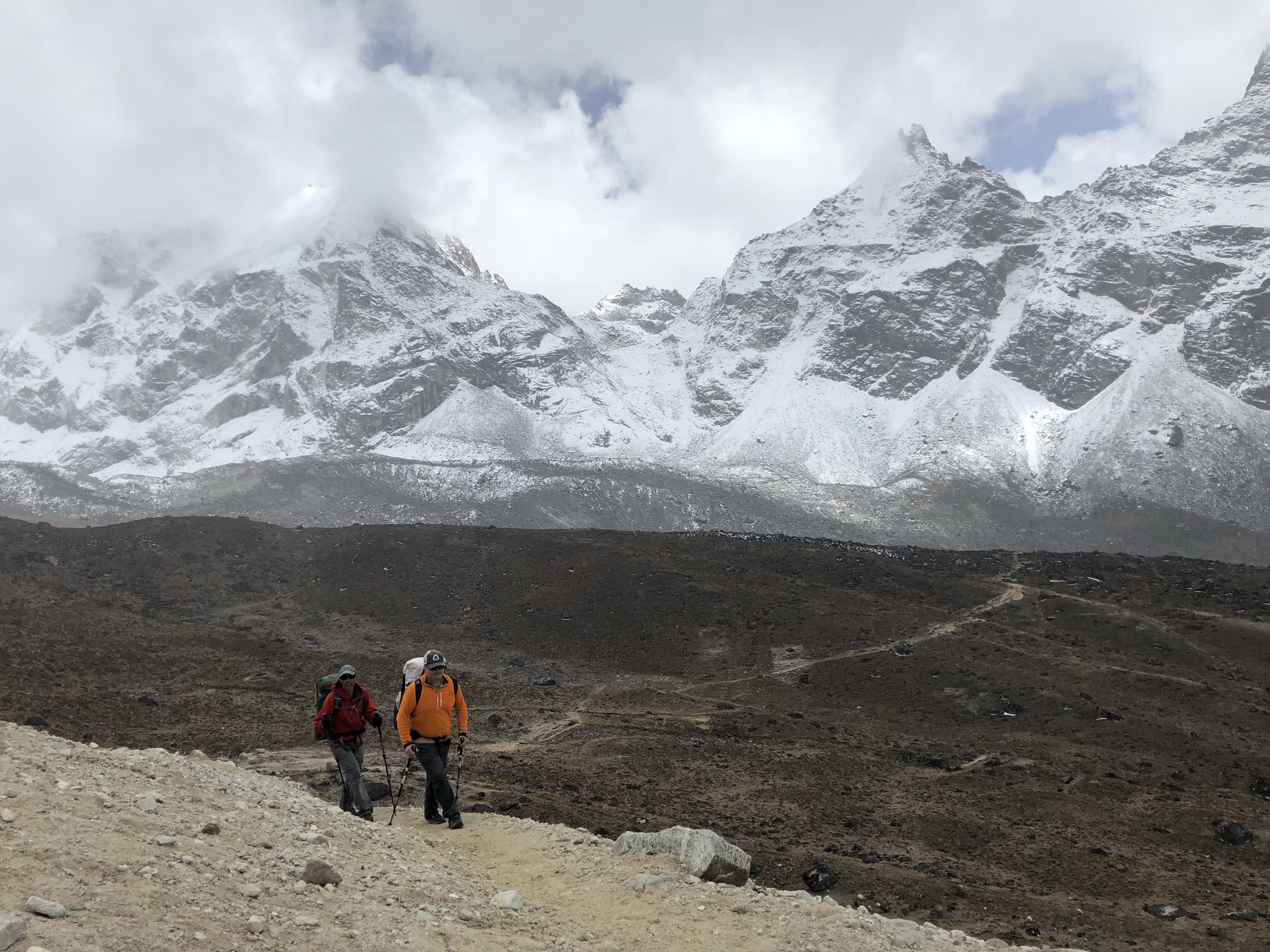 The dip in the center is Cho La Pass. It looks like a wall of snow from this side.

What I haven’t mentioned is that Griggs just can’t seem to shake this illness he has, that may be the same thing he’s had since day one. It’s incredibly disappointing and frustrating for him. His diarrhea and complete exhaustion returned as we came down the pass. By the time we got to lunch in Dragnag, the tables had completely turned. Buck-30 was rebounding, getting food down, and taking back his full pack weight. Poor Griggs was completely depleted, and couldn’t force down all his lunch. Nooo!!! As for me, I was feeling ok, despite a combo of probably altitude nausea combined with hormone nausea with my period starting. Yep, this was totally NOT our day! We are a wreck! 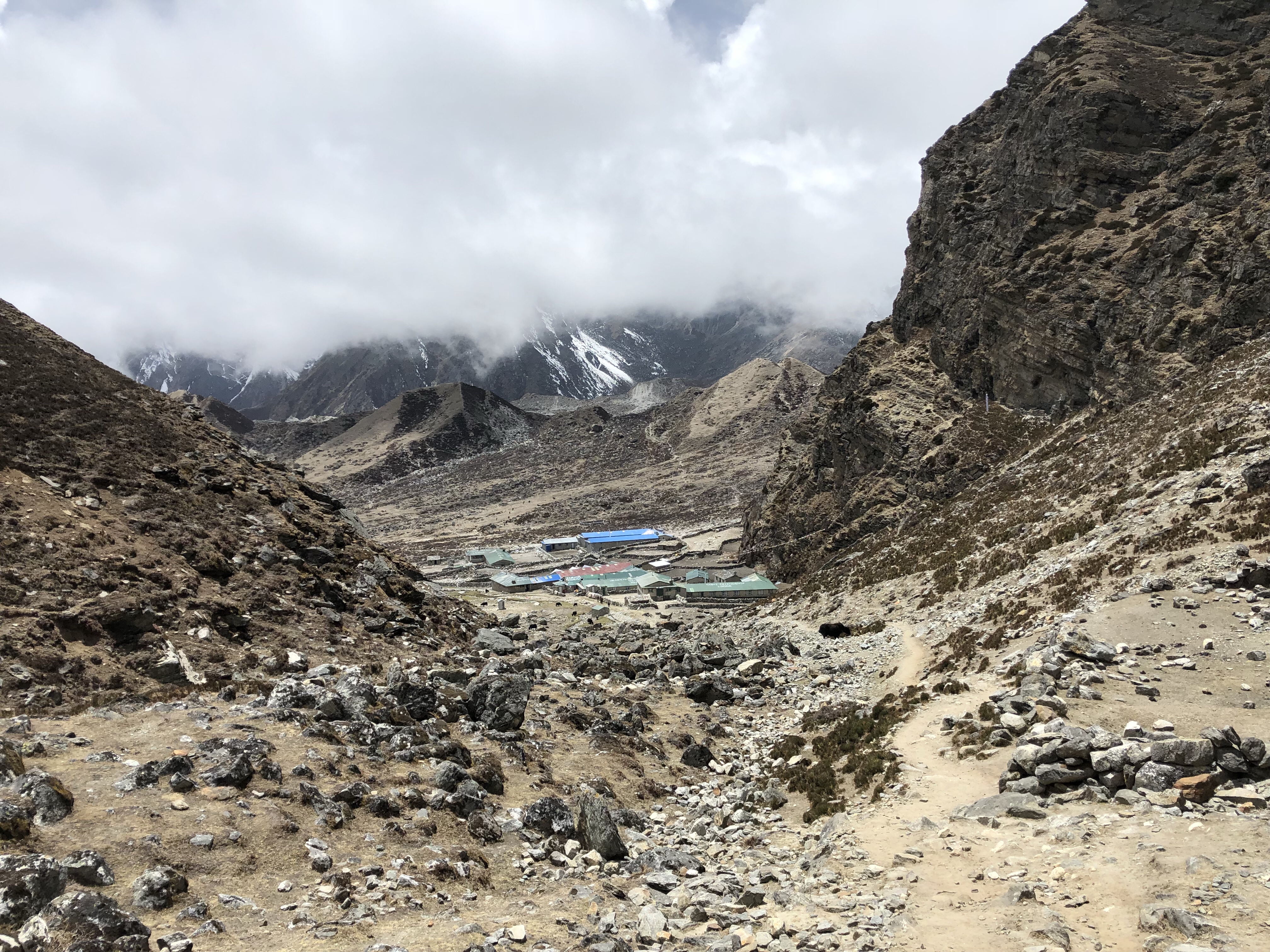 It was 1:30pm when we finished lunch, and just needed to make it 3hrs (at the most we hoped) across a glacial moraine to Gokyo. We set off and had two options. Being sick and tired, we didn’t think it through clearly or discuss it. Instead of taking the insanely highly used route of the Three Passes Trek to get across the moraine, we set off on the GHT’s route despite the fact that the book says to ask locals the best way. They all go there eventually, right!? We knew the easiest way was along the Three Passes Trek, but we are on the GHT, saw a path, and saw a man atop the pass we were headed over. Once over that pass, we were on a path weaving through the moraine and along glacial lakes. So far so good… 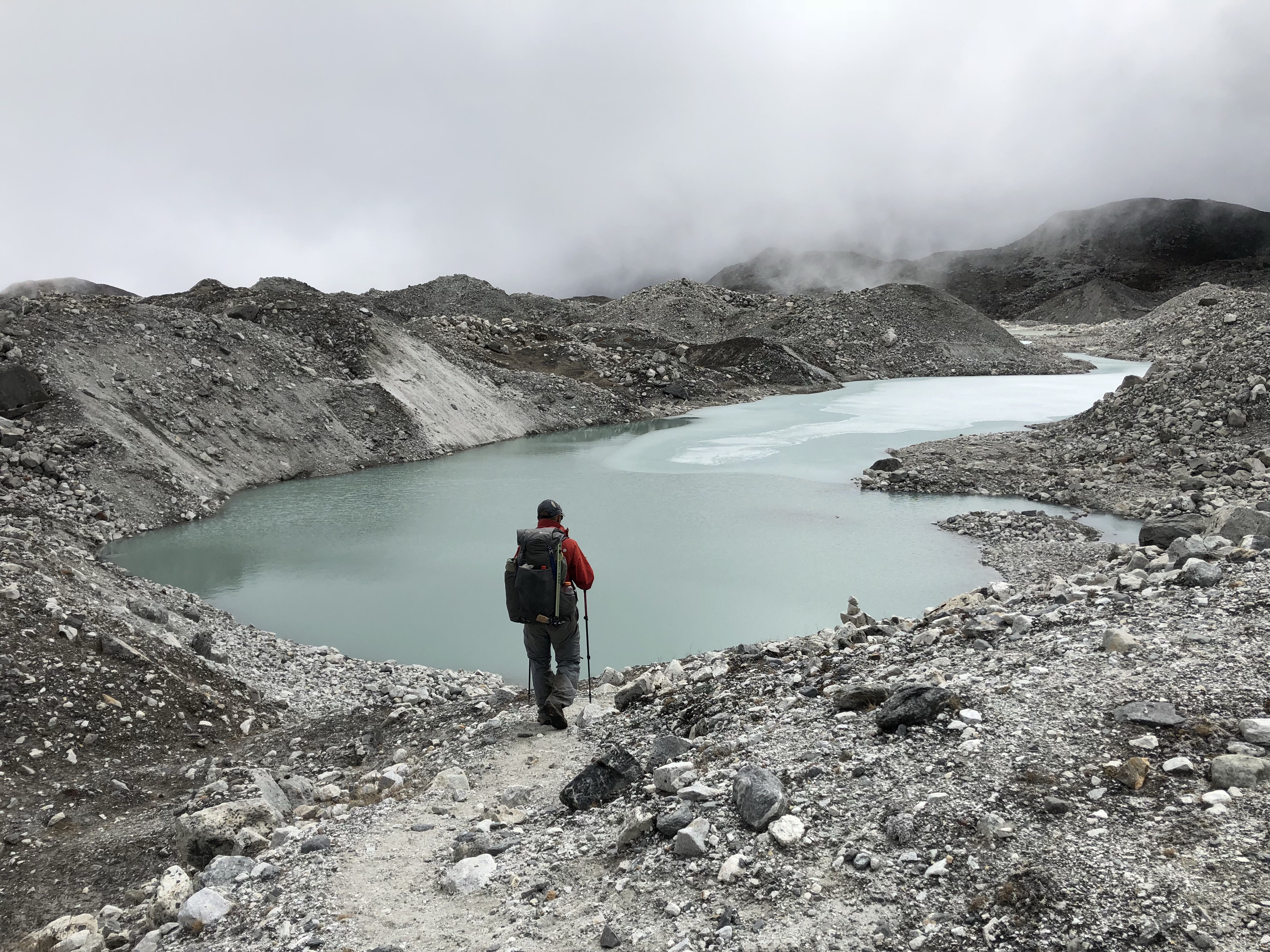 Then the path petered out, and the rock hopping began following cairns. After almost an hour, we came to a dead end at a lake that was impassible and not even on our gps. We had no choice, but to hike all the way back to Dragnag over all those rocks, NOT OUR DAY!!! 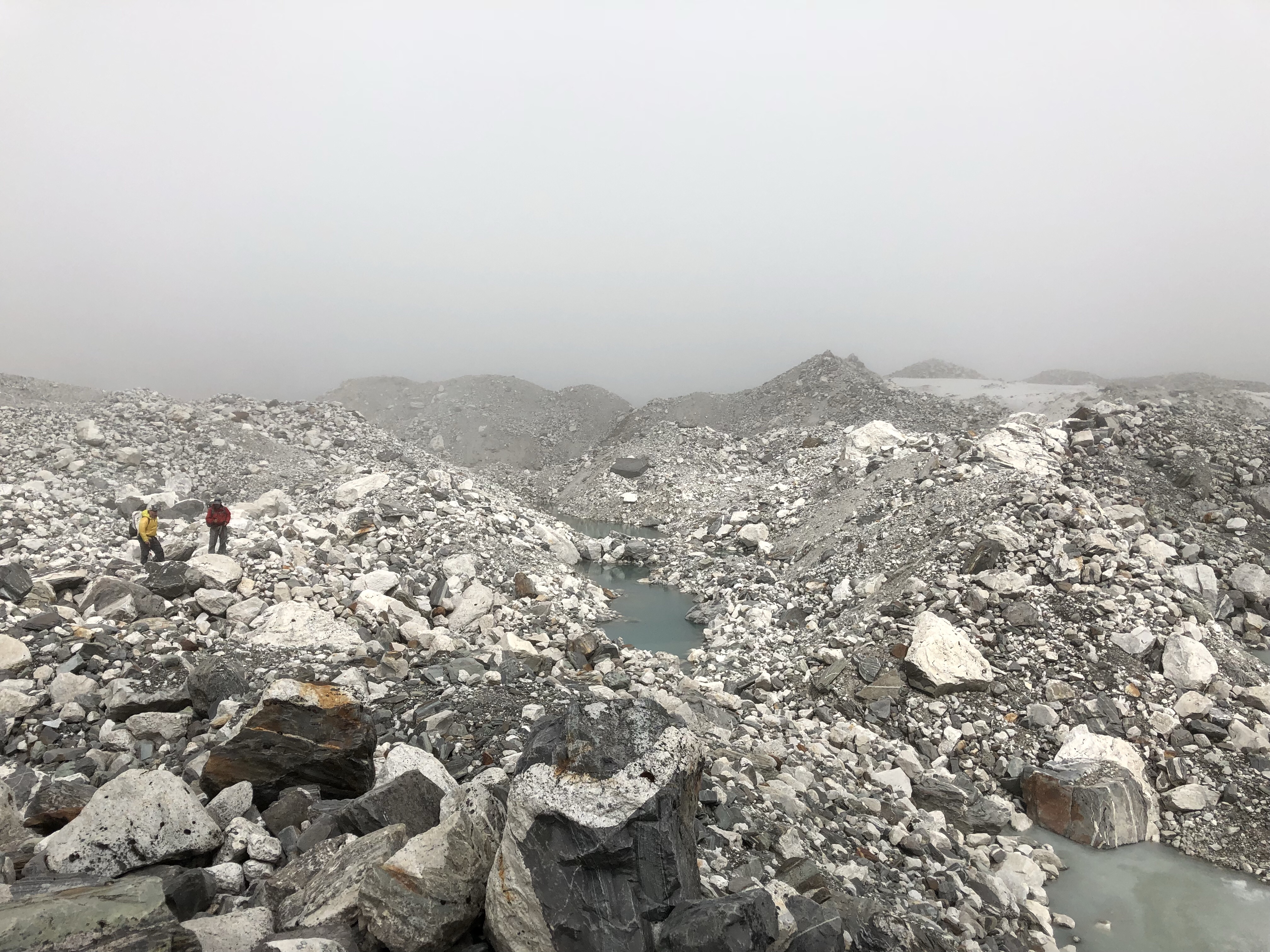 We were all tired, dejected, and frustrated. We got back to Dragnag at 3pm, 1hr 30mins after we left. I was the only one in condition to possibly hike on to Gokyo, and I couldn’t do that to the guys. We checked into the first teahouse we walked by and pointed to the pass we went over asking if there was a way across the glacier that way. He said “No! There are now lakes that block the way!” Ugh! All we had to do was ask! We got rooms and I sat there for 10mins. A man that came over the glacier on the Three Passes Trek did say it took him 3hrs, but I knew I could do faster with my pent up frustration. He said it was well marked to follow. If I didn’t go to Gokyo tonight, I’d miss my opportunity to hike Gokyo Ri in the morning to see the Everest view before clouds moved in. I couldn’t bare not trying. I took off knowing both Buck-30 and I could communicate on inReach devices. They would hike in tomorrow. The path was undulating and weaving, but dirt path at least 70% of the time. 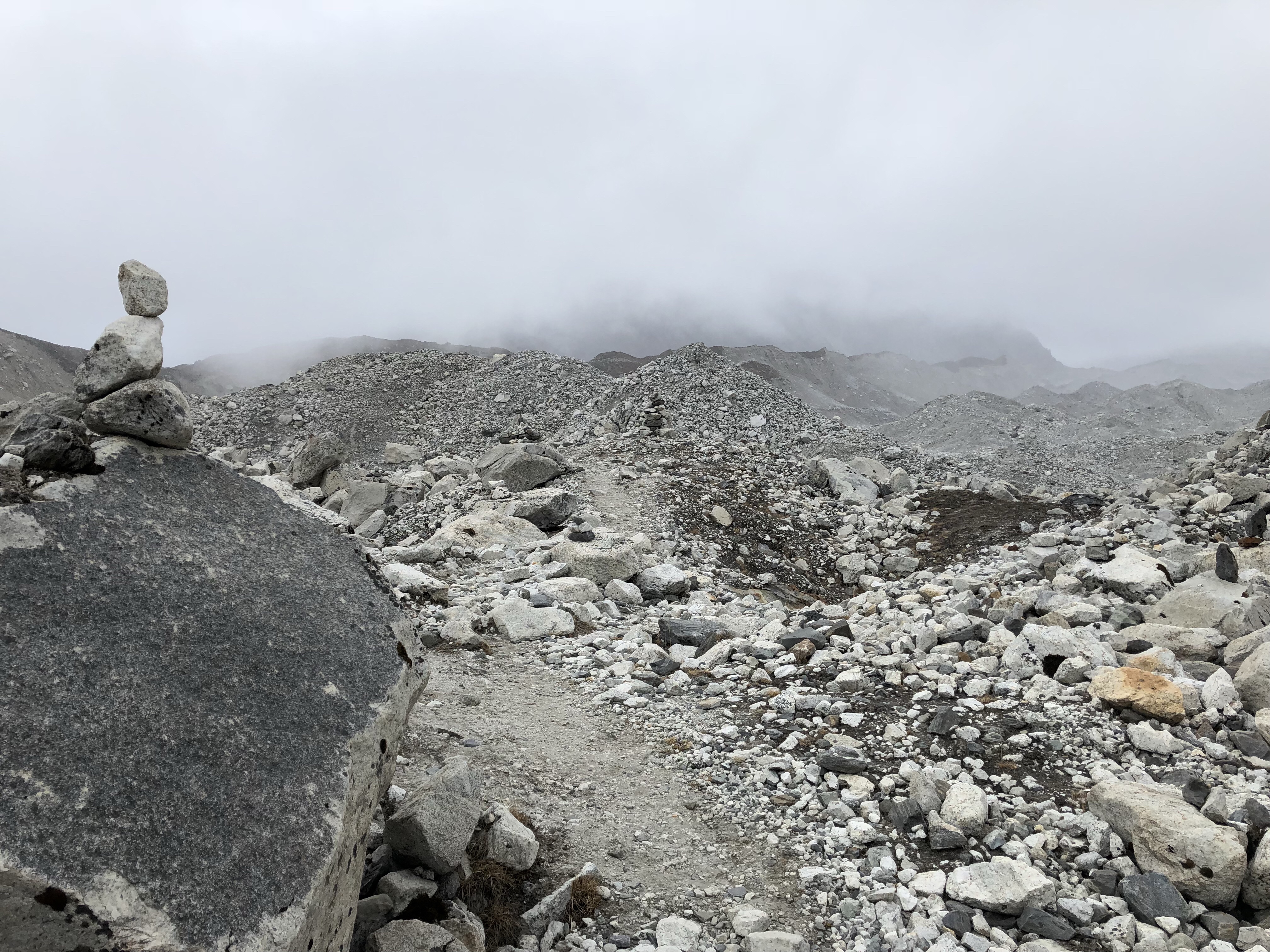 It was cold, with low fog, and flurries. I flew through it, and was in Gokyo in 1hr 26mins. I was so glad I decided to go for it. 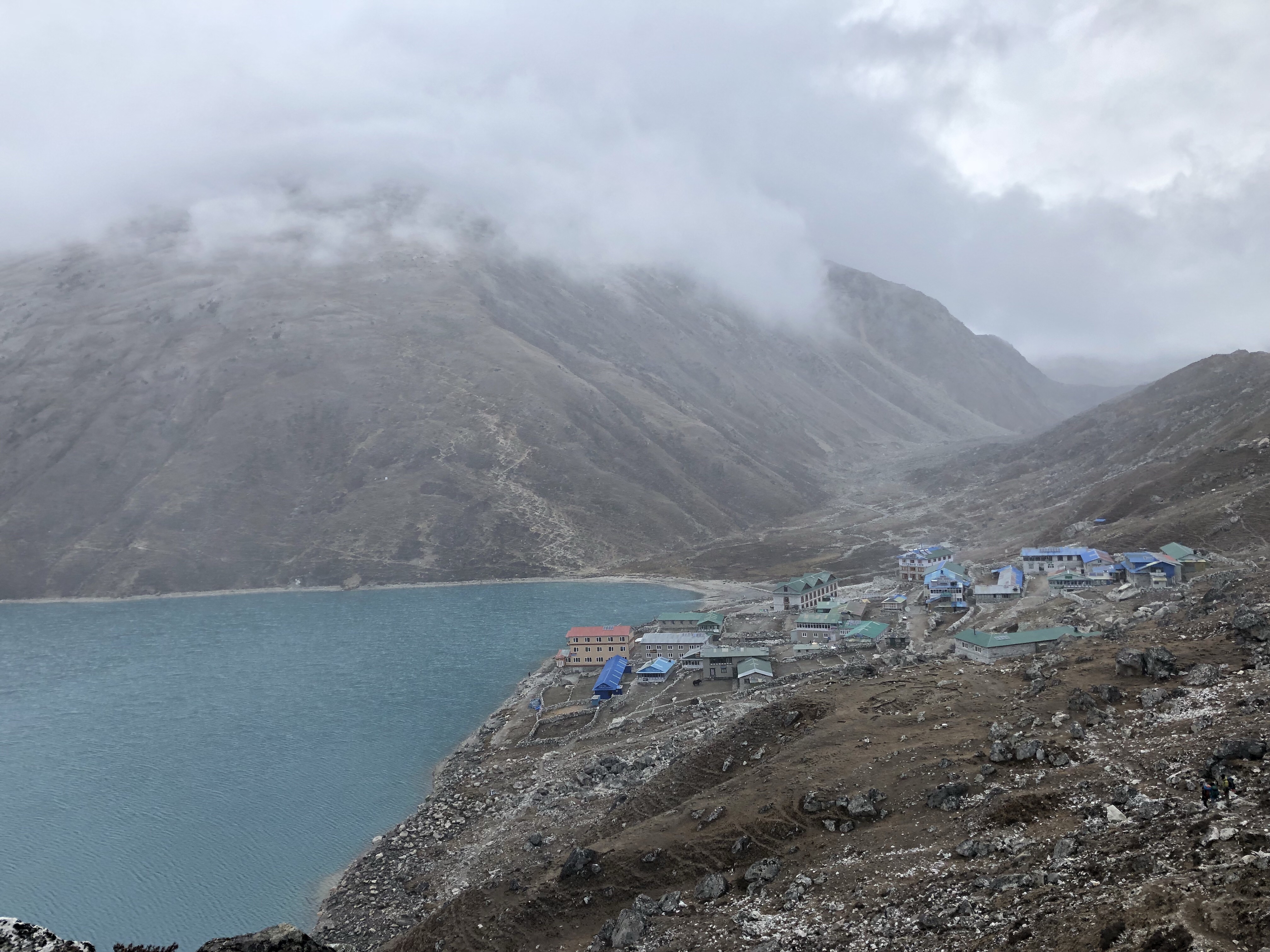 I got a spot at the Gokyo Namaste Lodge, and it was packed. Apparently, recommended by Lonely Planet. My room was freezing (with a view of the lake), but the common room for dining was like a sauna and packed. I spent the evening in there, and noticed that it was quite a young crowd for the most part. This area seems to draw the younger travelers more than anywhere else we’ve been. 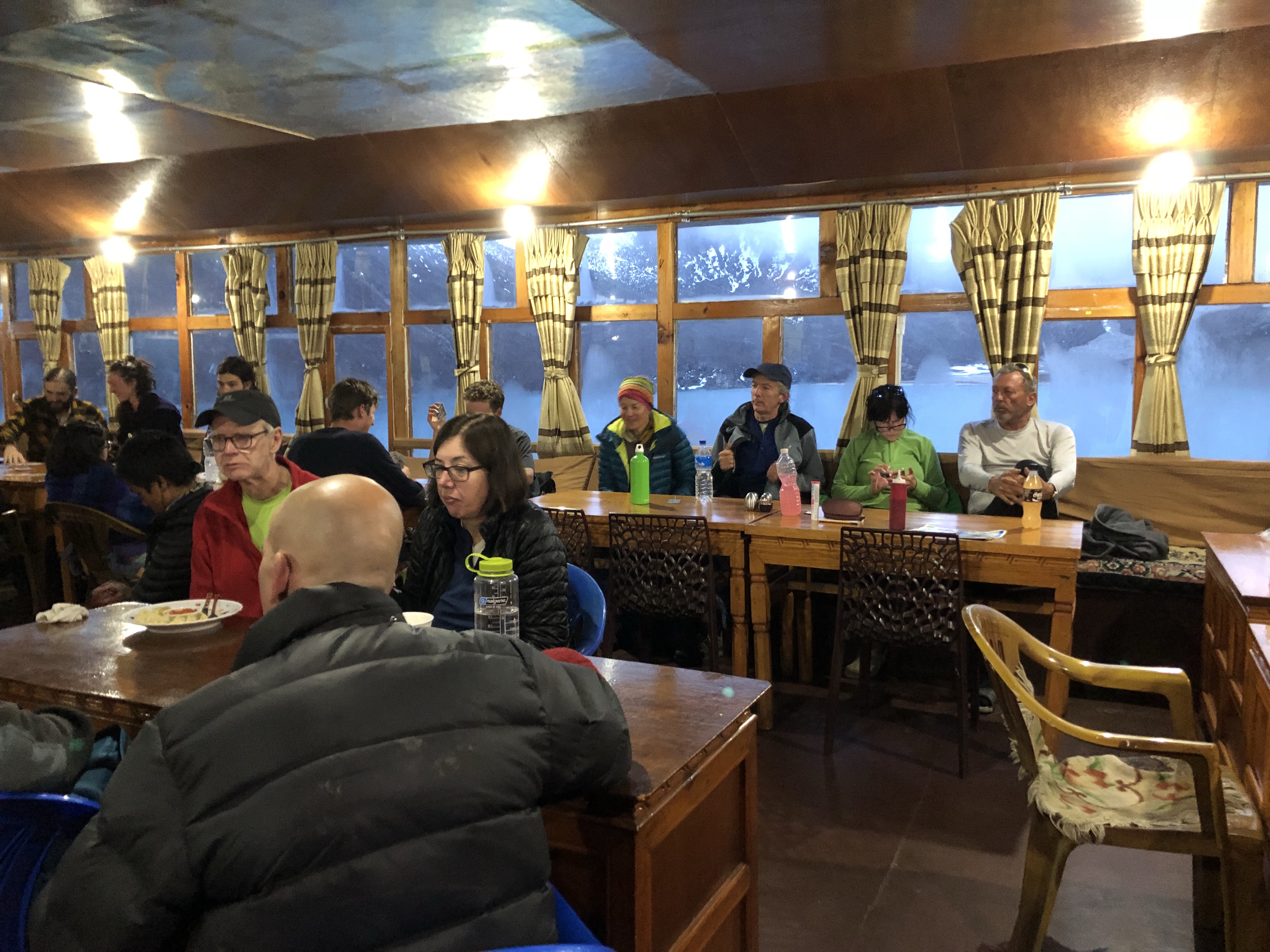 My plan is to head up Gokyo Ri for the view of Everest early tomorrow. The path can be seen in the photo above. It is the switchbacking path on the opposite side of the lake. It should take about 3hrs, then I will relax the rest of the day, and the guys will hopefully come in feeling better. Buck-30 was doing much better as he tends to take the Cipro right away and rebound within the day. Griggs was not good at all, and is now questionable for moving forward with how strenuous our next few days will be. We are hoping he wakes up fully recovered, but he’s been trying to shake this for weeks. It’s so hard to watch him go through this! I’m really worn out today, and am looking forward to the day to rest tomorrow.