It was a muggy night and I had trouble sleeping. The rain started at 2:30am was on and off all day. I would say it rained for 75% of the day today alternating between a light rain and a steady rain. In the morning, it was warm, and the rain was so light, that I was tricked, and took off the rain pants and wore my t-shirt with the umbrella. The track went by another dam and being along water was nice. 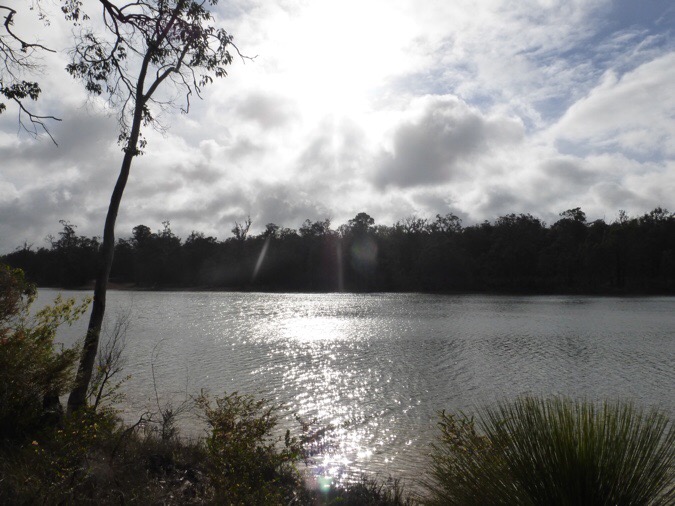 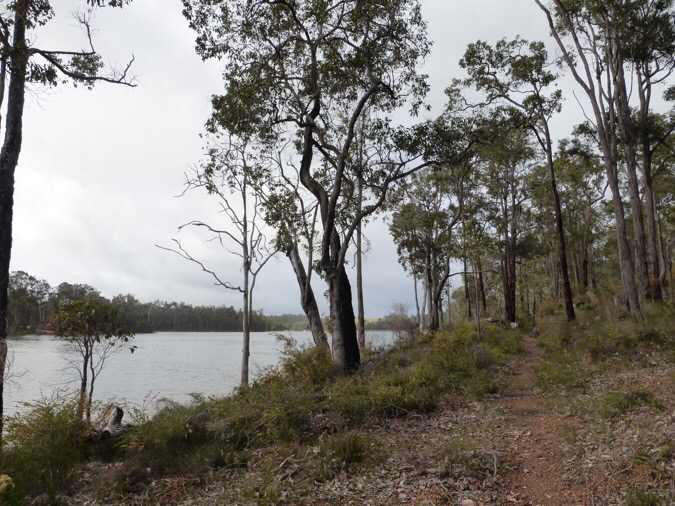 Then, around 9am came the downpour and temperatures dropped to needing the long sleeves and jacket. When the hard rain hit, I was fortunate to be on a brief road walk that went by a tavern with a nice big covered porch area where I was able to get to change back into the rain gear. The track then followed a rail line for a bit and a sheep farm. 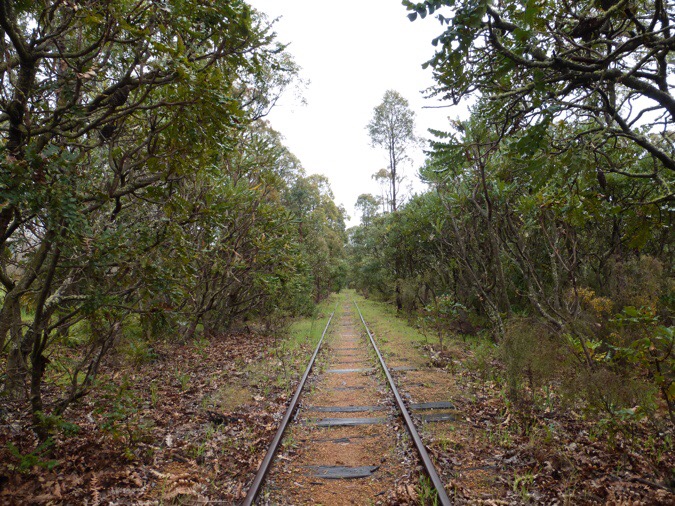 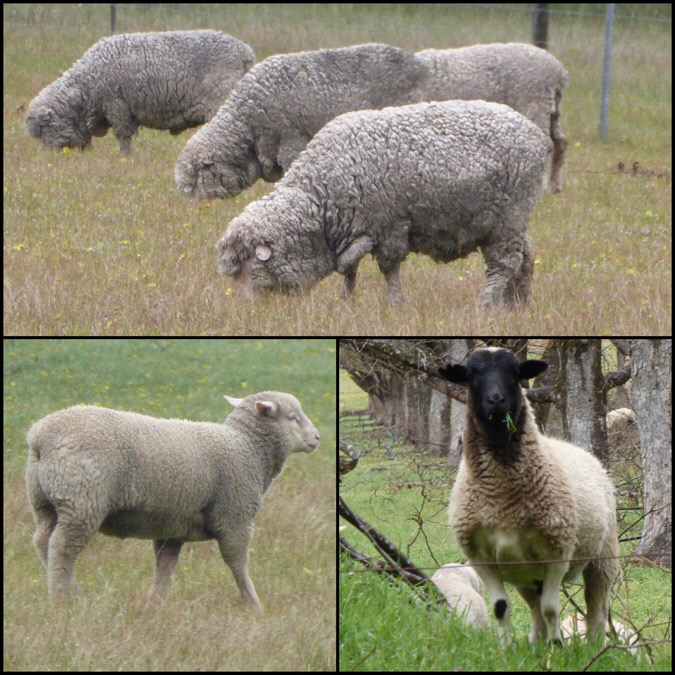 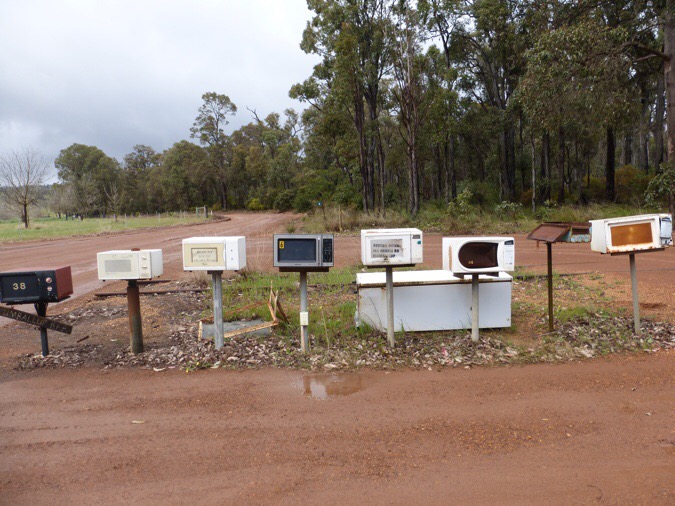 Actually, there were multiple farms and different animals. The cows were interesting. When I walked by, the whole herd of them looked up in excitement and came running at me. It was like they were dogs with how excited they were and that hope in their eyes that someone might play with them or give them food. I have never seen a cow look like that. I don’t know what they thought I was going to do, but a good 50 of them ran all the way up to the fence and scared the crap out of me that they would run right through the fence. When they got to the fence they then followed me up the road as far as they could along the fence line. One even ran up and did one of those things where they pop up like a dog on their hind legs and do a giddy leap in excitement it was really funny and odd. 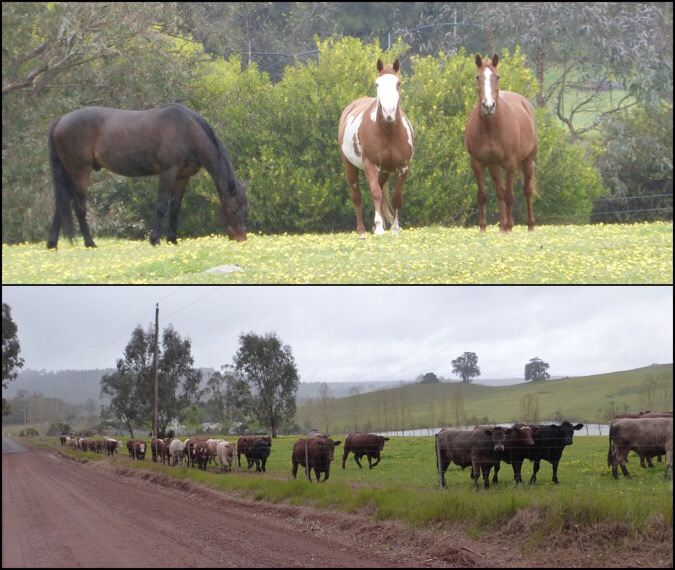 The wind was so strong at some points that the rain was horizontal as I was going past the farms. I had to hold the umbrella at my side to protect myself from the horizontal rain. I do love this umbrella! Have I mentioned that? Those of you that are not familiar with my previous trips this year, this is my third umbrella this season because I managed to lose the first two. One was on the Kings Canyon High Basin Route, which was technically not my fault. The other one was just a couple weeks ago on the Larapinta. I am currently using Marcus’s umbrella and having a new one ordered for him. I am so thankful I have one! 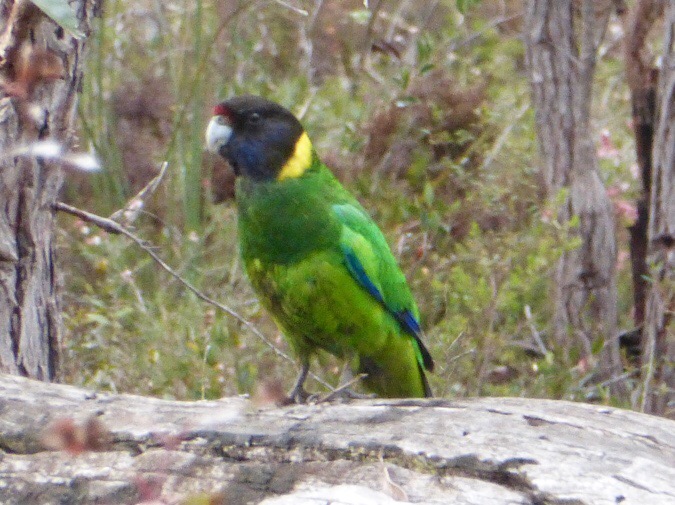 I’ve had many people ask how I have it rigged to be hands-free. Here’s a little explanation on where to get the umbrella and how to make it hands free. I get my umbrella from Gossamer Gear, but you can buy them at a ton of places online under the name “chrome” or “liteflex.” They are originally made by a European company called euroSCHIRM and they call it “light trek.” It used to be known as the GoLite Chrome Dome before GoLite went out of business. If you order from Gossamer Gear, you can also order the elastic stretch cord that they have that I use that to rig the umbrella to my pack. Email me if you do order from them and I can give you a 15% off one time discount code.


Some people use Velcro or find another method that works for them, but I’ve been using the elastic cord for years and it’s what works for me. I take a couple inches of the cord and tie it in a circle (you can melt the tips so they don’t tether). Then I thread the loop through itself onto the pack in two different places. 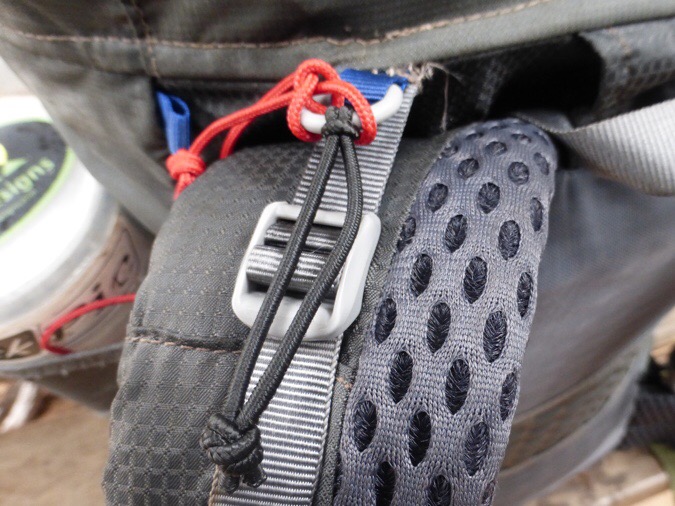 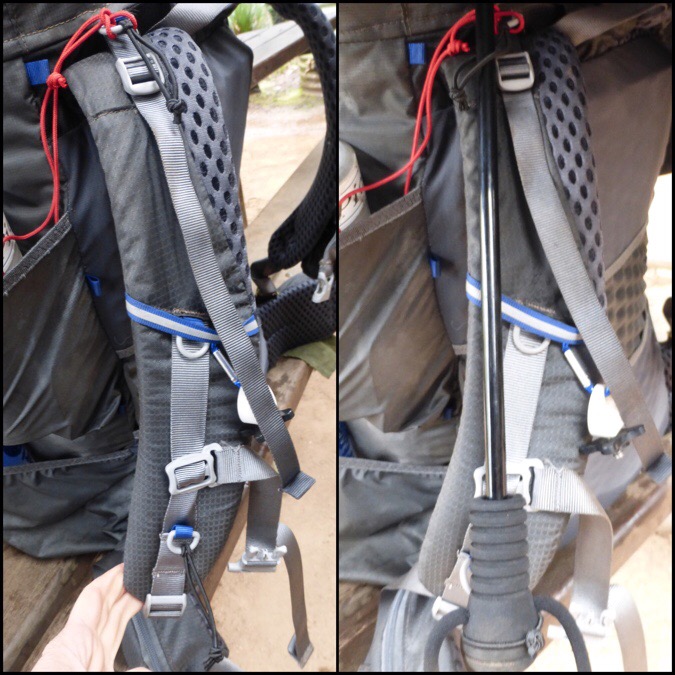 Ignore the red string attached to my compass.

I have one loop up at the top of my shoulder, and the other one underneath near my lower side of my arm strap. I also use the chest strap to secure it even more. Usually, in the woods, like out here for example, just having it on the pack provides enough protection and there’s little need to hold it. If there is a great deal of wind or if its it’s coming out in angle, I will either angle it by hand or take it out of the loops and hold it the way I need for that period of time. 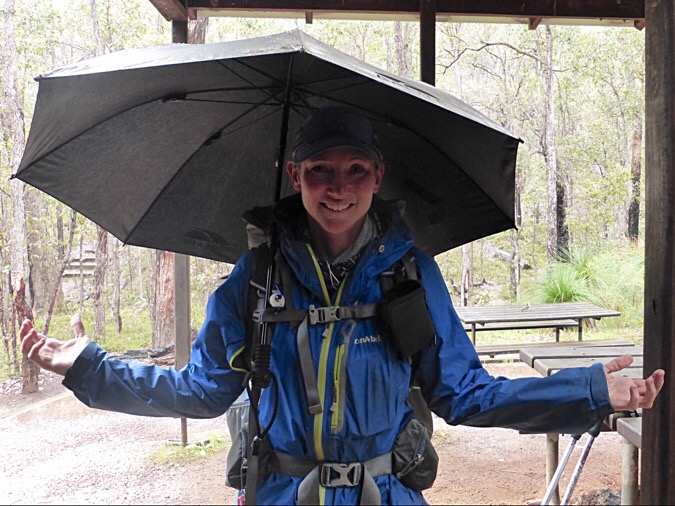 I’ve gotten so used to it that I can do it without breaking stride. I can just grab it from the long pocket on the side of the Mariposa pack that I have while walking and pull it out like a sword. Then I can reach up and thread it through the top elastic and down into the bottom one and it is done. I can just as easily take it out and put it back in the side pocket while I’m walking when it stops raining. I’m telling you, I went years without an umbrella and when I got one, it change my hiking world! It isn’t just for rain, but also sun. I use it often for shade at lunch. I’ve seen very creative uses of the umbrella and it just comes in handy in many ways. 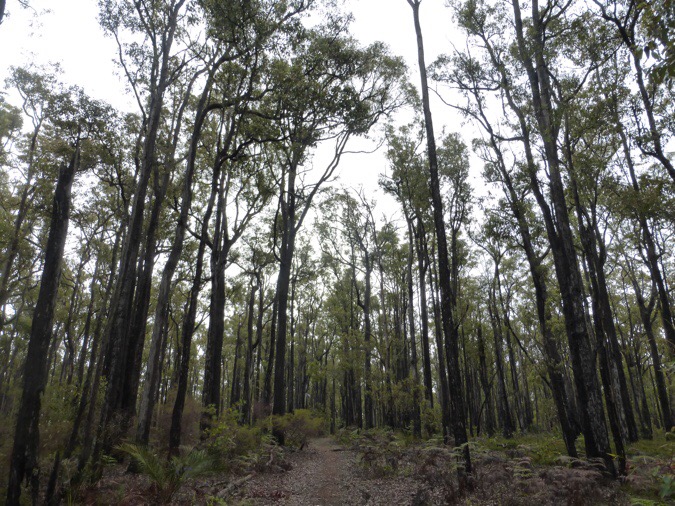 Overall, today was pretty much shelter hopping as it rained all day. I was excited to see that today had the day pretty much equally split with 12mi/20km to the first shelter and then 14mi/23 km to the next one. That lined me up perfectly to land in a shelter for lunch and then end the day at a shelter. 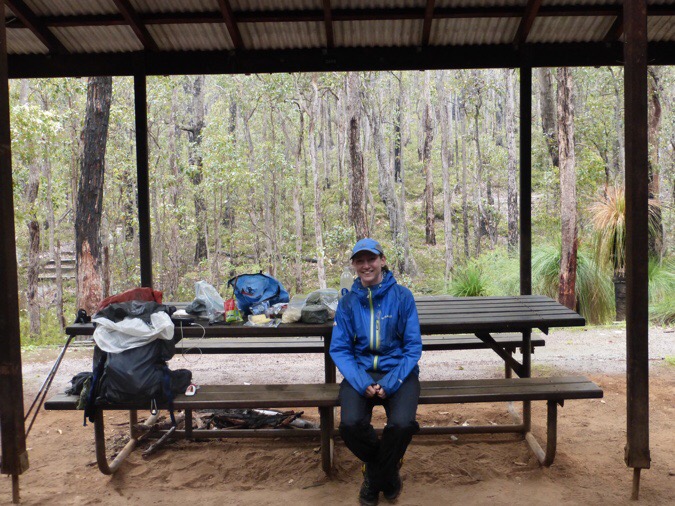 While I was at the Noggerup Shelter for lunch, I read in the logbook that I did miss one hiker I have been behind named Marvelous, who seems like a fun woman. She smartly chose to stop at a spa that was partway through the day today, so she is now behind me. I saw that there was a guy ahead of me doing a few weeks section hike that I would end up camping with tonight. 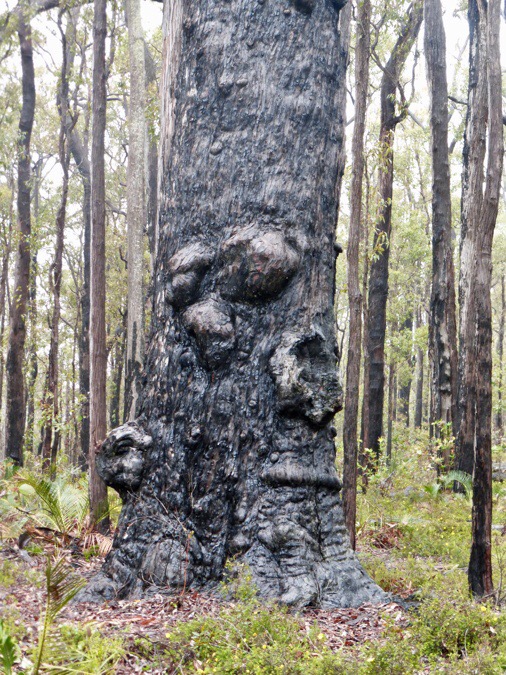 When I got to the shelter, it was sorta awkward. I won’t say the guy’s real name, so let’s say Paul (47yrs old). I realize he may read this, but it is what it is. I got to the shelter just after 5pm and he had all his stuff spread out drying. I asked if he was Paul and he was taken aback that I knew his name and asked how I knew. I told him the logbooks (it’s quite common for people to know who people are from the logbooks). He said I was the first person he’s seen in the three days he’s been out and he did not seem excited to be sharing the shelter with someone. He had trouble comprehending where I came from today (the first thing he asked). I think it took awhile for it to sink in since it was pretty far. He didn’t seem to like it at all that I was doing double what he was doing and that I was dry. He was a little shell shocked and it was hard to tell if he was just tired from the wet day, adjusting after being alone for 3 days, or just not wanting me to be there. Probably a bit of all three.


He seemed perturbed that he had to move his stuff that was spread out, but I told him I didn’t need to dry anything and he could keep it there. He still moved it and seemed pretty annoyed that I wasn’t wet (love the umbrella!). I tried to ask some questions and his responses were short and minimal as if I was being too intrusive. He seemed to not want to talk, so I stopped. He sat away from the dinner table with his back to me as I made and ate dinner and he had a warm drink. It was silent for at least 20mins. I can play a good silent game no problem. 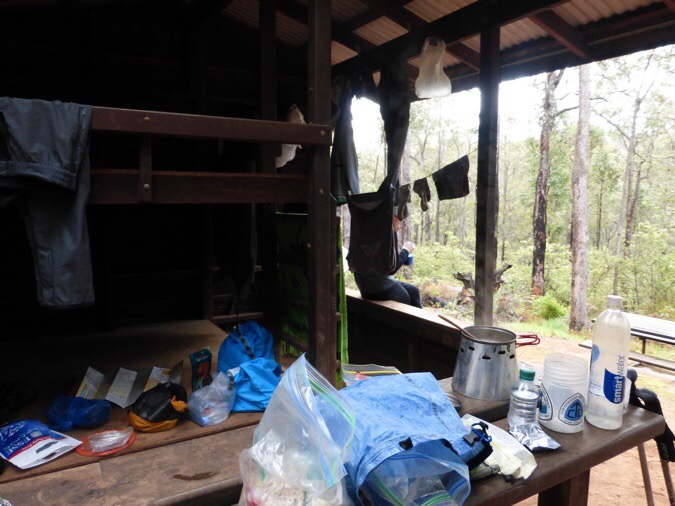 Paul in his own space.

He came over to the table to grab his things and take them to his spot and I told him he was welcome to sit at the table with me. He was sitting there when I arrived. He bluntly said he wanted to look out and see the view since that’s what he hiked here for. After a bit, he broke his silence and asked me what time I started this morning, how fast my hiking pace is, my pack weight, and if my feet were dry. When I told him they were wet, he said not to take offense, but that he was happy to hear at least my feet were wet.


He warmed a bit and we talked about the weather, gear, and trail. Definitely nothing personal was welcomed. As he was laying down, I mentioned something about an upcoming shelter and he bluntly said, “I think I’ll just experience it for myself when I get there if that’s alright.” Then he went to sleep without saying anything else. Yep, can’t win them all. I think he’s just having a rough day.  Just starting out and there being this string of rain. Plus, I’m sure seeing me dry wasn’t fun. Definitely a bit awkward and actually the first Australian (from Perth) I’ve met to not be warm. I think that’s what was the most startling to me. I’ve gotten used to everyone being so sociable and disarming out here.

I get to watch more Bloodline tonight. I have to say, it is not really growing on me much, but I don’t have anything else loaded to watch. I may fix that if things don’t improve. I heard from many people it starts off slow and is worth waiting for, so I’m trying to do that and I’m on episode five. I think part of it is that it is dark and creepy at times and that is not my favorite thing to watch, especially in a tent or shelter by myself at night. I would rather go to bed thinking of something a bit lighter. Even House Of Cards has some levity. For now, it will do. It’s either that, or I might end up making flyswatters!

One funny story to end today. Just as I was approaching camp, it finally stopped raining, and I was on a descent when something moved on the left side of the forest. It startled me and I gasped. It was something I hadn’t seen in a while and I was not expecting to see it today. What scared me was my very own shadow! It seriously made me jump! That is so pathetic.

It hasn’t rained since I got to the shelter. There are two forecasts I’ve seen for tomorrow. One has it being just like today, and another one has it warming and partly sunny. I guess it could go either way. I am just going to assume it will be like today so that anything other than that is a grand surprise.