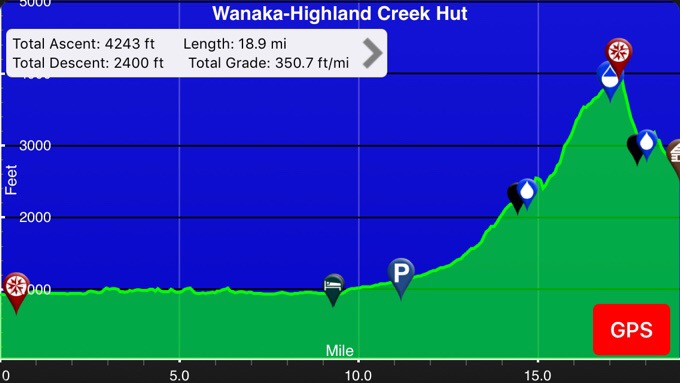 We got a leisurely start today knowing that the first half the day would be more cruising along Lake Wanaka. We had a good breakfast at a cafe on the way out and were hiking by 8:45am. The excitement of the morning was seeing the often photographed tree in Lake Wanaka known as Wanaka’s Lonely Tree. If you Google it, you will find a ton of images of this tree in all seasons and lighting. I remember Becky showing me a photo of this tree months ago with no idea of where it was. I totally forgot about it till yesterday when I saw another hiker had posted a photo online. I was glad I didn’t walk right by without knowing it. 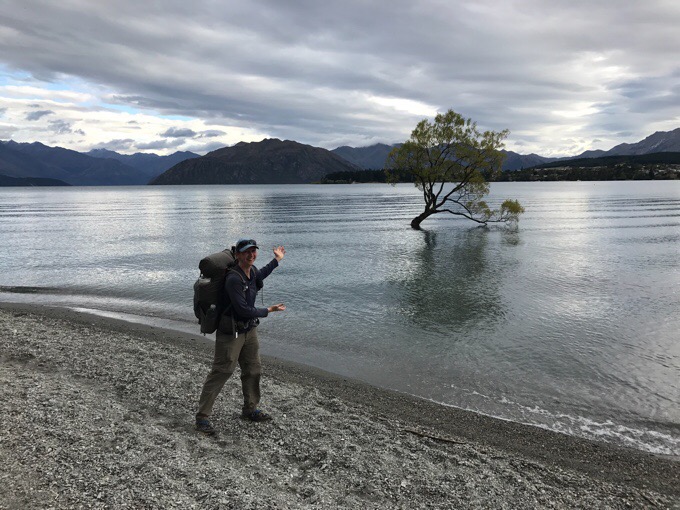 The Lone Tree of Lake Wanaka. 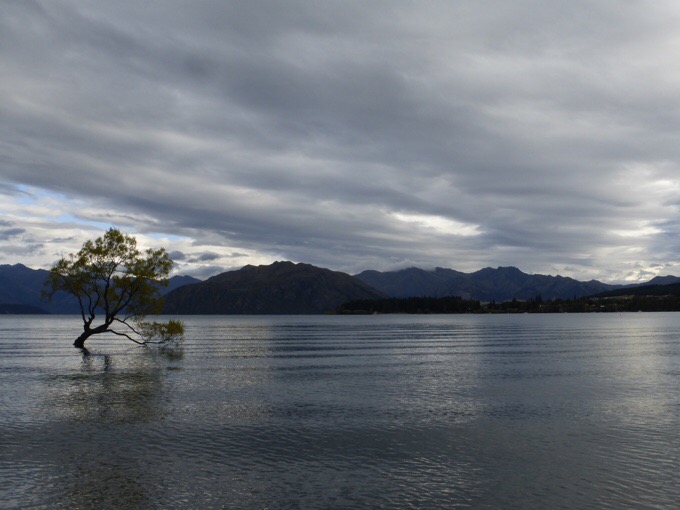 I forgot to get a photo yesterday, but here’s Griggs with his new haircut, clean shaven, and wearing his new shorts looking spiffy. 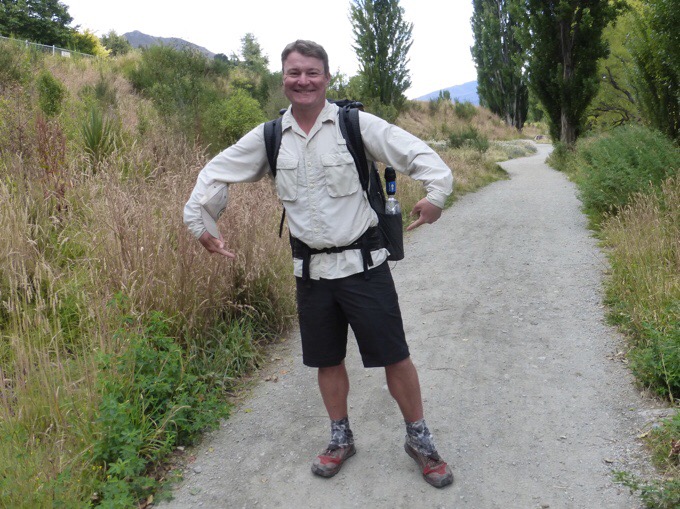 “These are my pants!” (inside joke, hehe)

The first few hours of the day was a continuation of the gravel track around Lake Wanaka. Again, really relaxing, pleasant, and enjoyable. 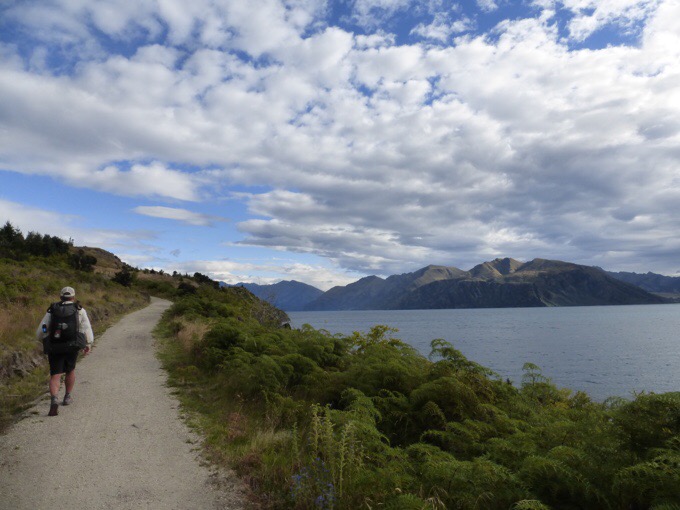 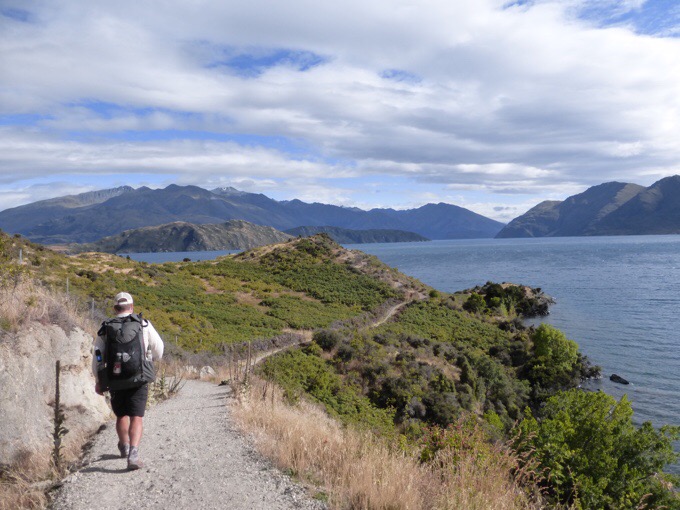 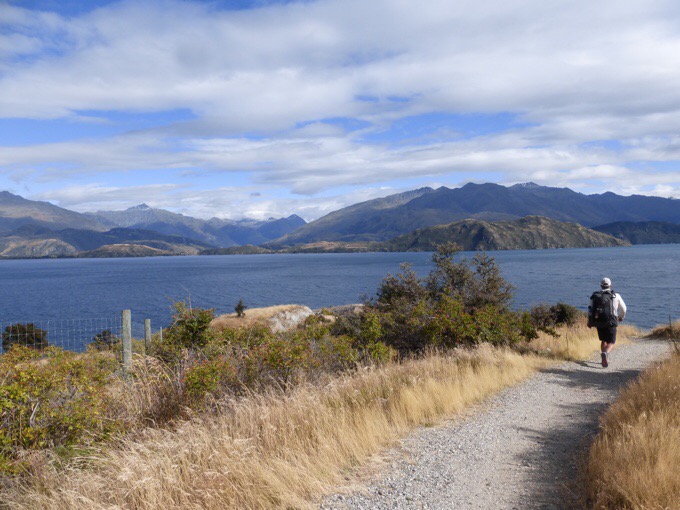 Once we passed a motor park, we turned onto the Motatapu Track, which is what we will be on for the next couple days. It is a mostly clear track that has a lot of steep ups and downs. The track notes are a bit intimidating because the 30mi/48km track is listed as taking 3-4 days to complete. That’s a long time! We are thinking we could do it in much less time, but gave ourselves plenty of time today to make it to the second hut, Highland Creek Hut. That will position us well for multiple options tomorrow depending on how slow the terrain ends up being. 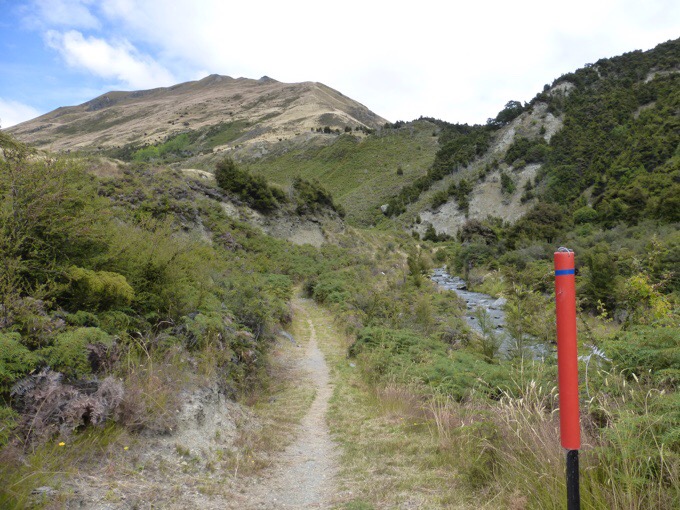 We had lunch before the climb started in a great wooded area along a pleasant stream. It was one of my favorite lunch spots all trail. 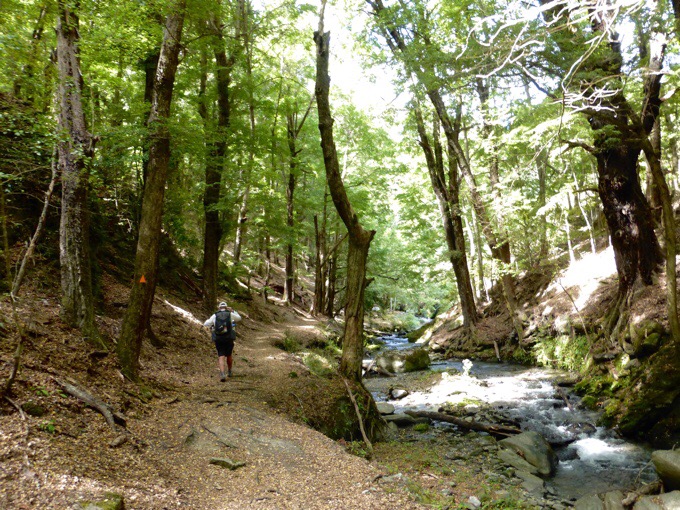 While we were eating, Jan and Jasmine came by also on the way to Highland Creek Hut. It’s always fun to see Jan and Jasmine as they were also on the same bus Felix and I were on to start the trail back in the beginning of November from Auckland to Kaitaia. We’ve leapfrogged ever since and it’s pretty cool to still see people I started with 99 days ago. Griggs started the same day as well. The last time we overlapped was in town at Arthur’s Pass 15 days ago. I didn’t get a photo today of them until the end of the day.

The climb after lunch up to the first hut, Fern Burn Hut, went by quicker than we expected. There were steep ups and downs, but there was mostly good trail tread to keep a steady pace. Griggs flew through it and I met him at the hut where there were already many hikers stopped for the day. 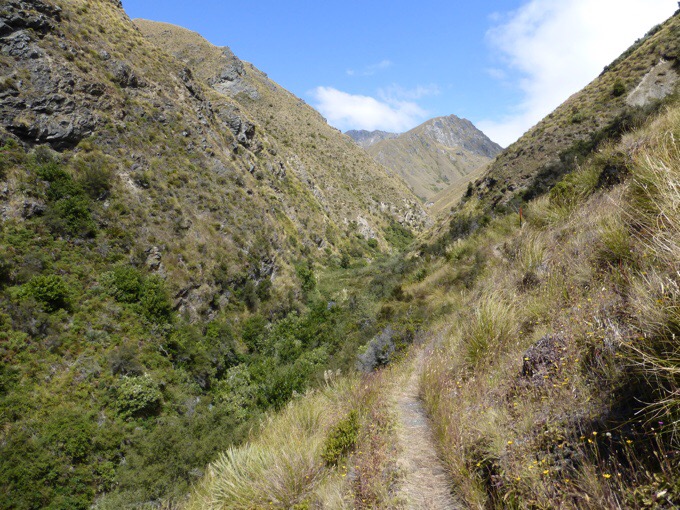 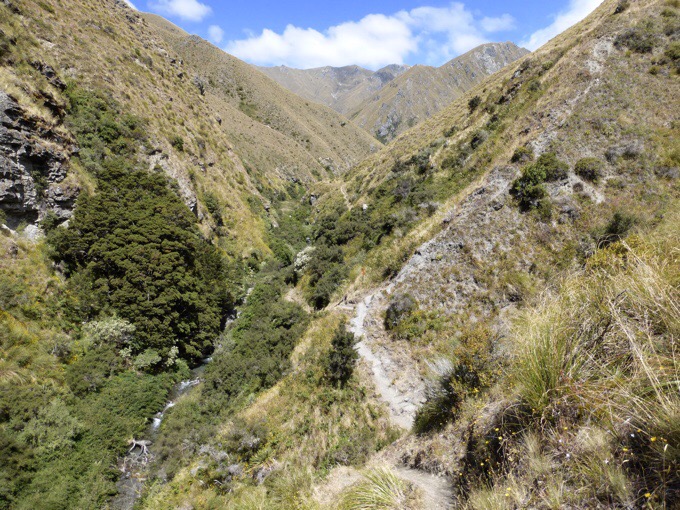 This section is an intimidating one, so many choose to do shorter days hut to hut rather than having to pull out bigger days. We took a break and moved on the next 4mi/6km to Highland Creek Hut. Jan and Jasmine had lunch there and also planned to move on to Highland Creek as well.

The track notes list the stretch of 4mi/6km of trail to Highland Creek Hut as taking four hours. We hoped it would only take three, and were really excited when we were able to do it in 1hr 50mins. There was some consistent steep uphill to Jack Hall’s Saddle and the views were great. 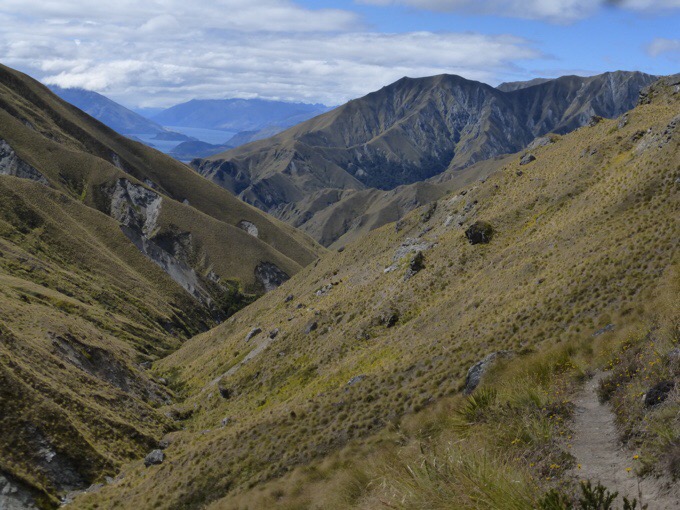 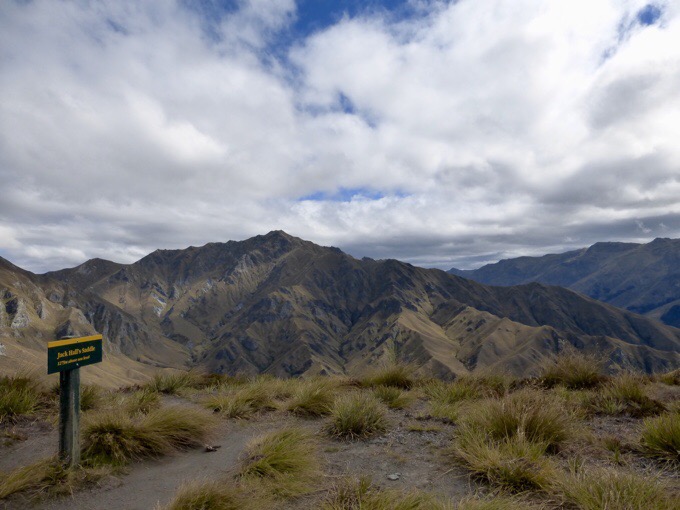 Again, we are really fortunate to have pretty perfect weather for this section. That’s a huge factor. After Jack Hall’s Saddle, there was a lot of steep down like a rollercoaster and we flew down that. Today was like a playground for Griggs. He loves skiing and felt like he was on a ski run going down. He was flying! 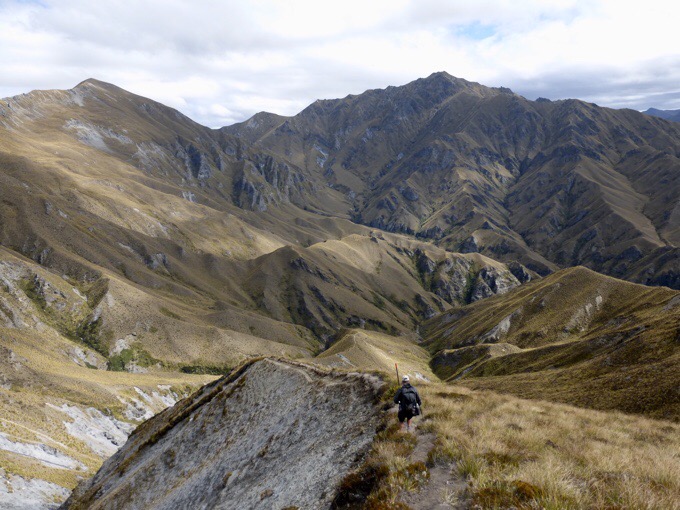 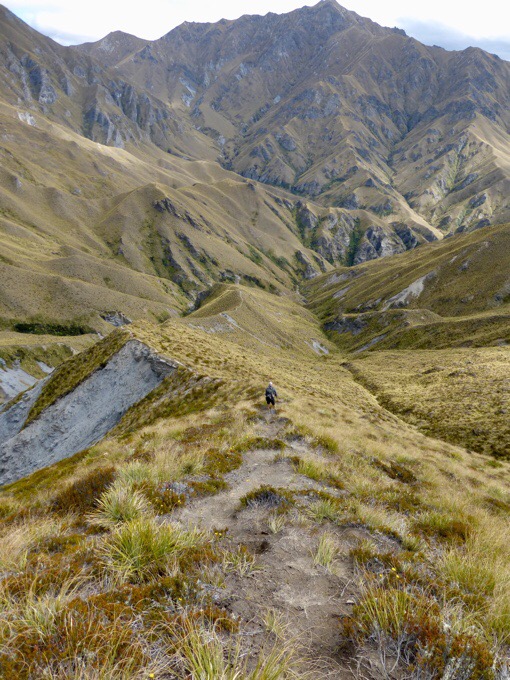 I have to say that Griggs is the most compatible hiking partner I’ve ever had. He has even more endurance and speed than I do, and I can’t say I’ve ever seen him tired. That’s rare for me to find, and I feed off that type of energy. However, I am feeling like my body is getting old because of the role reversal that I’m not the energized one running up and down the mountains waiting for him. With Griggs, I’m the one in the back that he’s waiting on at the tops of the mountains. He’s like an engine I swear. 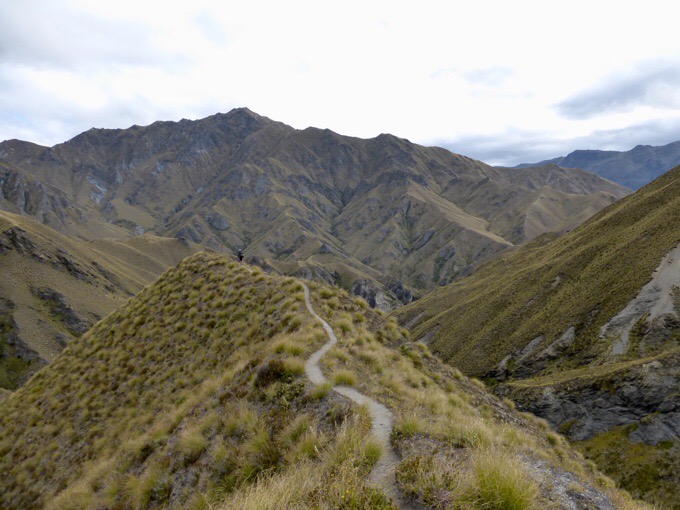 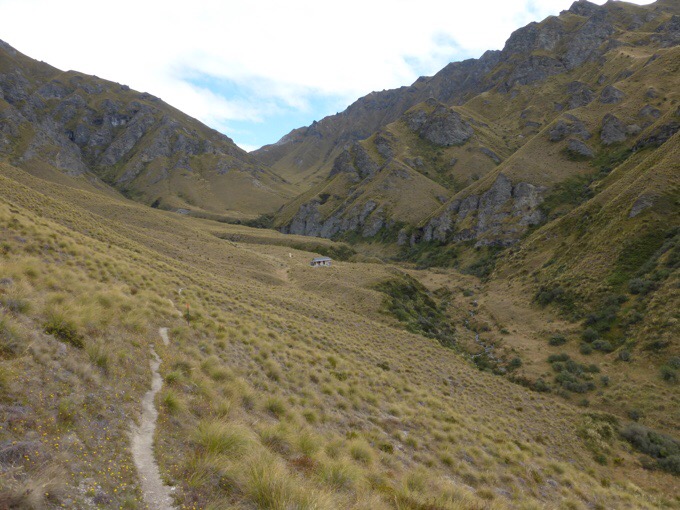 We did have fun on the track and took a ton of photos of the ridge walks and steep ups and downs. Griggs even did a cool time lapse video of me coming down part of the trail. I’m hoping it loads here. If you can’t get it to play, I posted it on Instagram and Facebook as well.

We got to the Highland Creek Hut earlier than expected at 5pm. I was super happy about that and loved having the early night to relax and rest up for a bigger day tomorrow on more of the same. The hut was in a great setting with awesome scenery of mountains all around. 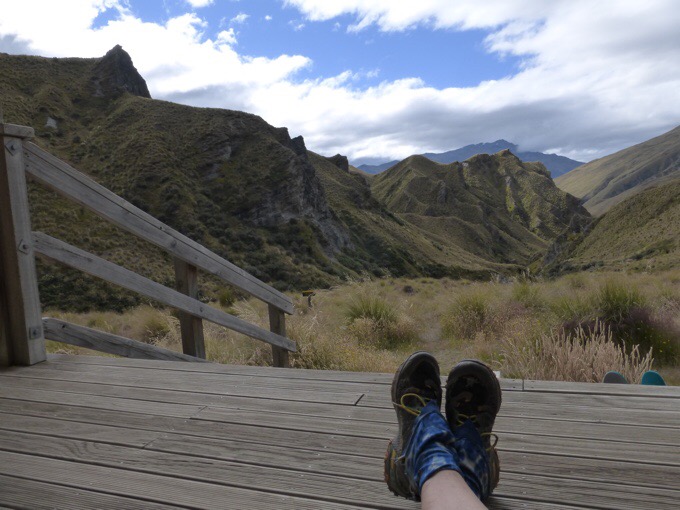 The hut sleeps 12 people, but can fit tons more if needed. It’s one of my favorite ones along the TA. Jan and Jasmin also arrived to make 9 people total in the hut. One northbounder and the rest doing sections. 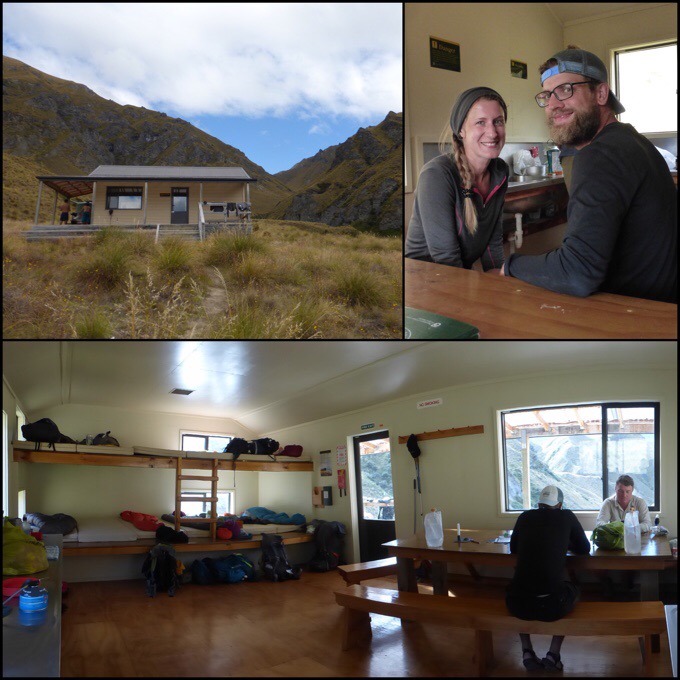 We had hoped Felix would show, but knew he left town a bit later and it seemed he wasn’t coming as it got later. Then, as everyone was starting to lay down for the night at 8pm, Felix arrived, yay! 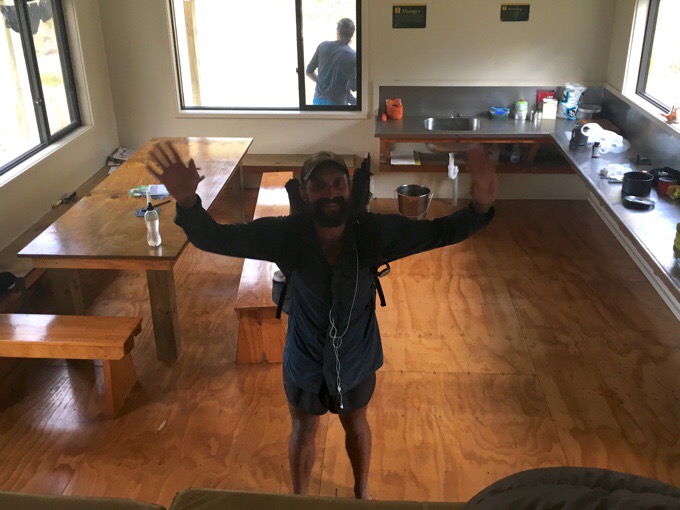 He was full of energy and the classic Felix you can’t help but adore. I’m now sleeping between him and Griggs and I can feel the kinetic energy just reverberating off Felix like he just had too many energy drinks. He doesn’t even need to do anything. Cracks me up. The plan for Griggs and me tomorrow is to get a good start and just see how far we can get. The options are to either do a strenuous possibly shorter day or a really strenuous longer one. Jan, Jasmine, and Felix are leaning towards taking a half day or day longer than us on this leg to get to town a day later, so we may not see them again this leg. We’ll see how tomorrow goes. Good news is that weather looks to be great again!