July 25th
Along River Noguera de Pallaresa-Near Noarre
Campsite Elevation: 5284ft/1611m
*No mileage available. The guidebook lists distances on the route by time rather than miles.

Note: If you read yesterday’s post before I was able to add the izard video, it’s now on there and totally worth viewing.

It was a glorious night of sleep next to that stream last night. I know those wooded spots next to streams aren’t the most scenic camp spots, but they are my favorite because I sleep so well in that environment. I started at 8am today and began the 4265ft/1300m climb that would take half the day. Almost immediately, I got good cell service and stopped for 30mins to post yesterday’s blog entry. It’s a pain when that happens first thing in the morning, but it was better than at the top of a cold windy ridge. This type of thing is one of the reasons it can be convenient to hike solo. I like the freedom of keeping my own natural schedule without having to think of anyone else. Selfish possibly, but I do love the freedom of it!

The climb up was quite enjoyable. It was a fair grade that didn’t feel strenuous. It started out with a rare wooded trail and then broke out into a nice plateau that led to the base of where the real climbing would start. There was a couple breaking camp as I walked through. Great spot! 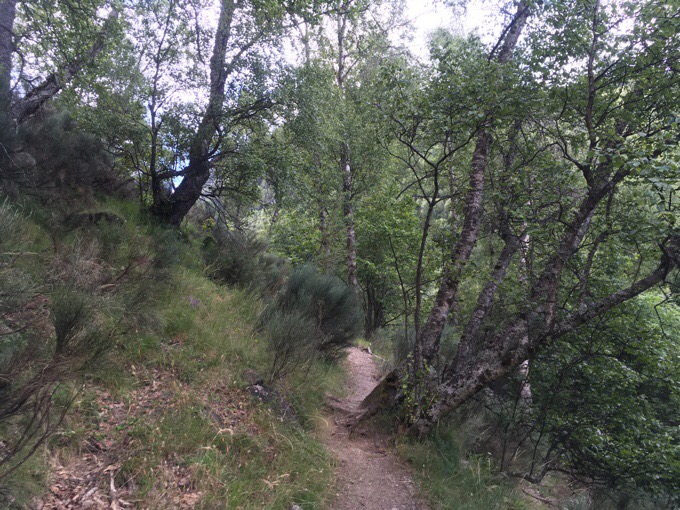 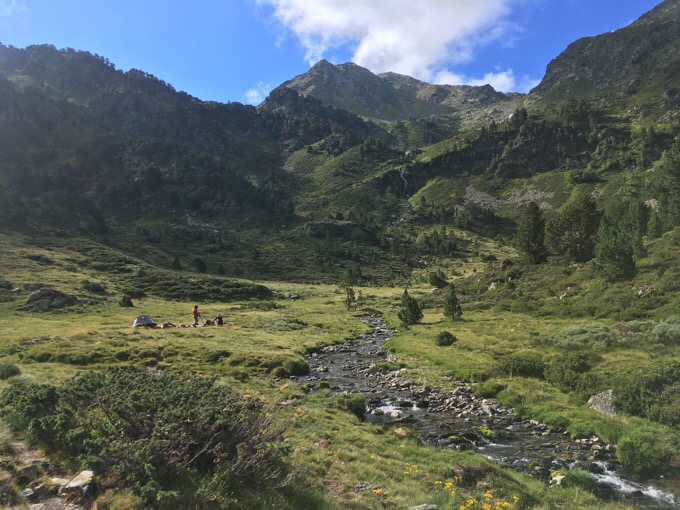 There were some switchbacks and many levels to the first col, the Col de la Coronella. As with most climbs, there were more rocks toward the top. 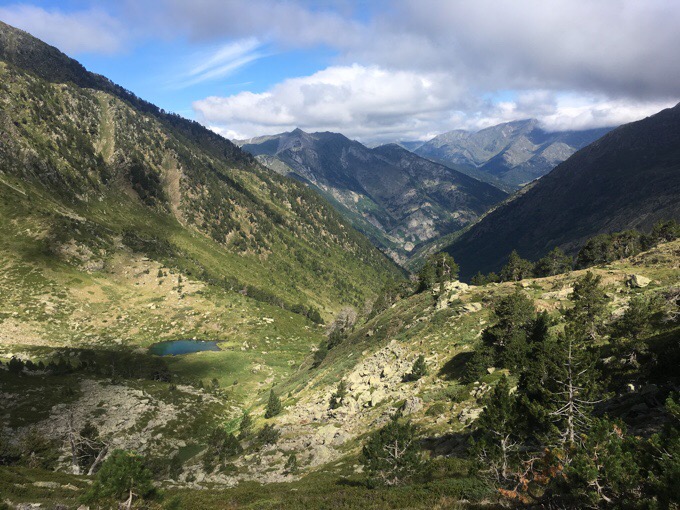 Looking back on what I climbed up.

As I was heading up, two men were placing flags for an ultra run called the Ultra Vallsdànue that will run right through here this coming weekend. It’s a 93km route, with an exhausting 7200m/23622ft of ascent! It was convenient to have the flags for this col and much of the next one before it branched off from the HRP. 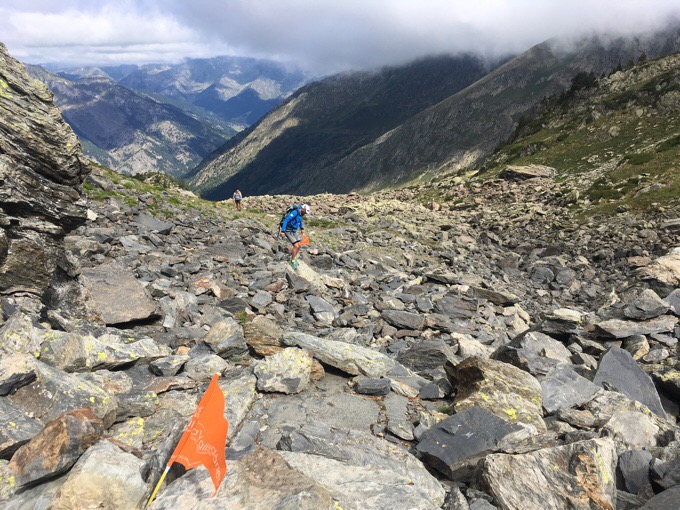 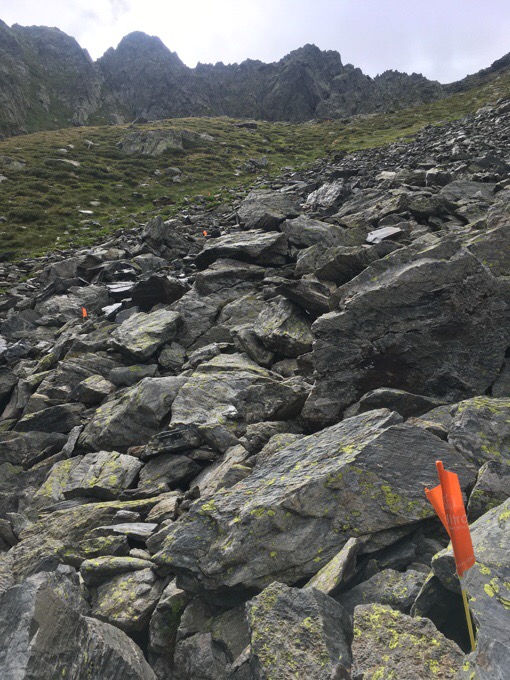 When I got to the top of Col de la Coronella, I was relieved for a couple of reasons. One was that there was a warning about it being a sketchy steep downhill. It had some loose gravel, but I was thankful that it wasn’t as sketchy as I’d built it up to be. 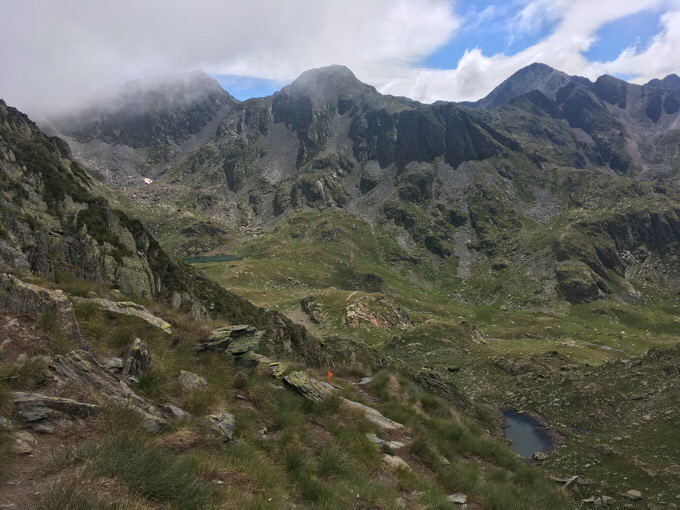 First I traversed left and then cut across the middle to head around to the right.

Second, when I got to the top and crossed to the other side, it was like the cold damp air that had been following me the last two days vanished. Yay! I get cold easily and wasn’t as comfortable with that chill that was cutting through me a bit and making lunch or any other break unenjoyable. 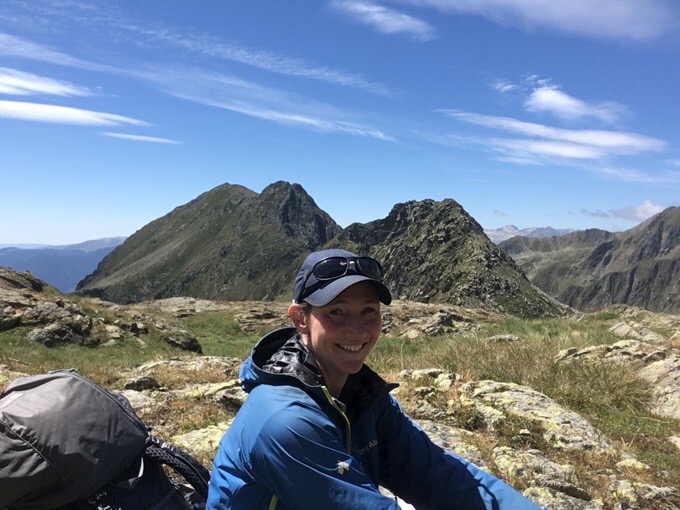 The views today were just awesome. I can’t believe how scenic it is out here all the time. Hikers really have to work for it out here, but the payoff is huge and totally worth it! I mean seriously, I’ve never been on a route that has so much amazingness just constantly back to back. It is surreal to be in it. Someone asked me about doing a section and asked me to recommend some highlights out here. I was thinking of that today. All of it is so grand that it all seems to blur together. 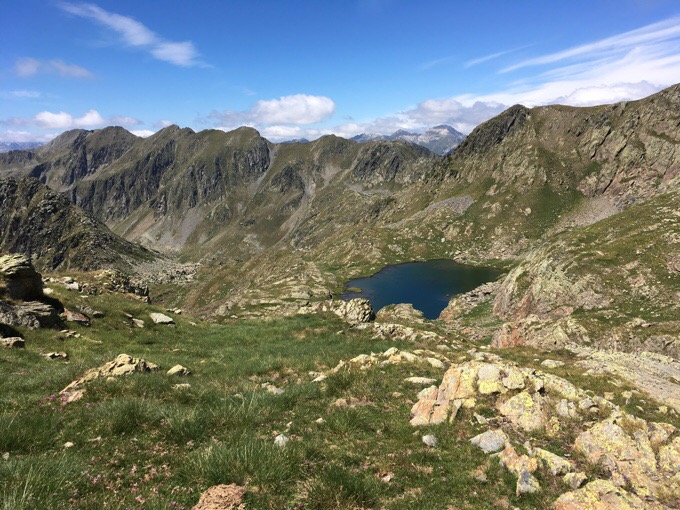 Looking back on Estany de Calberante where I had lunch.

What I love are those big reveal moments that happen multiple times a day out here. When you crest a ridge and have a surprise waiting for you on the other side with a whole new unique valley of awesomeness. I just can’t get tired of it and am quite spoiled out here to get so many grand reveals in a day. That’s also why I like thru-hiking so much. Every day is new, and given the tough day I had yesterday, it made me appreciate today that much more.

When I got over Coll de Calberante I was in awe of the lake below, Estany Major de la Gallina. It is my favorite so far. The color was so blue and kept changing as I hiked down. It was huge and just so impressive. Being out there with it all to myself also adds to the magic of it all. 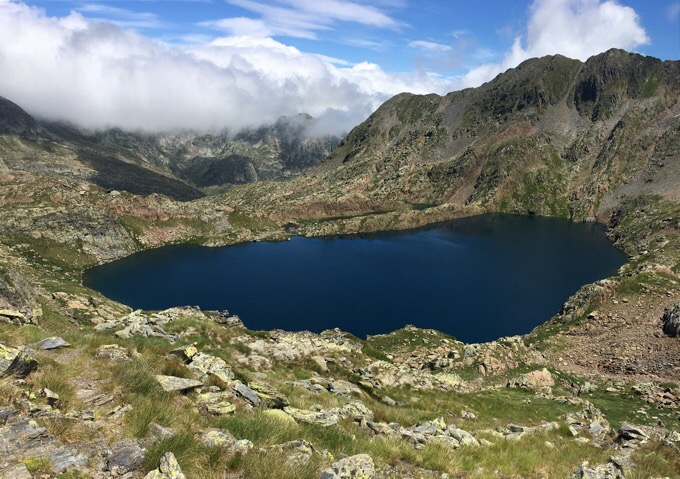 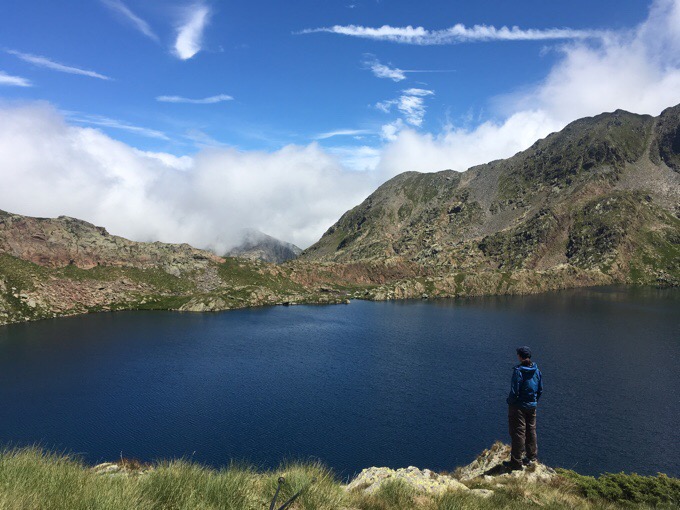 After the col, I had downhill the rest of the day. The first hour or so was down to Refugi Enric Pujol, an unmanned hut. That descent was a bit of a maze to follow cairns down grass, rocks, slick rock, and streams. Some fog moved in, but thankfully stayed high. 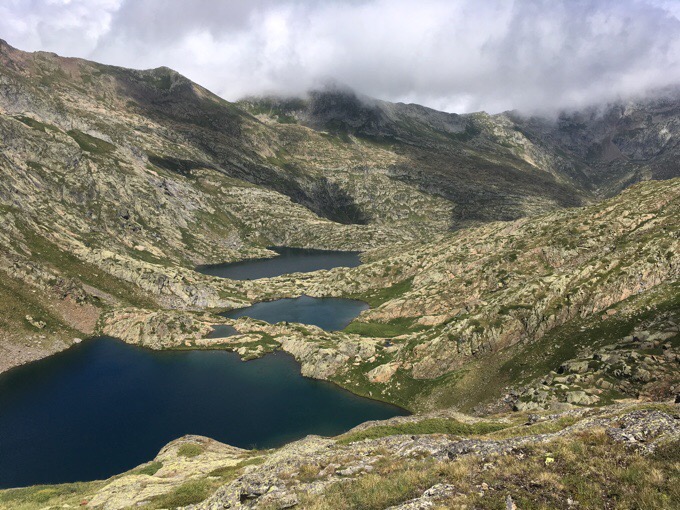 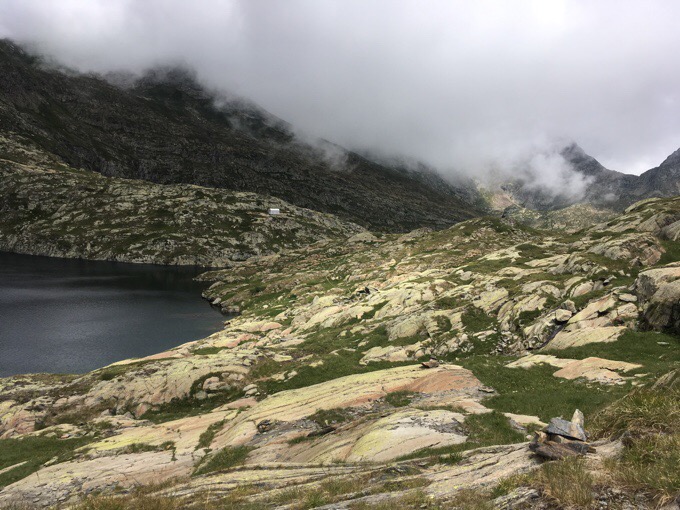 Notice the hut in the far center.

There was one couple at the hut that planned on doing a nearby summit tomorrow. I peeked inside since I hadn’t seen a refuge that was more like a hut out here. It seemed not too bad to stay in if weather was foul. I’ve been lucky so far to not need one, but it was fun to take a look. The guidebook conveniently breaks the days to purposely end at a town or refuge of some sort in case weather is poor. It’s nice to know they are for when I need them, but I’ve loved the independence of not needing to rely on the refuges. It’s a fun game at the end of every day to find a camp spot. 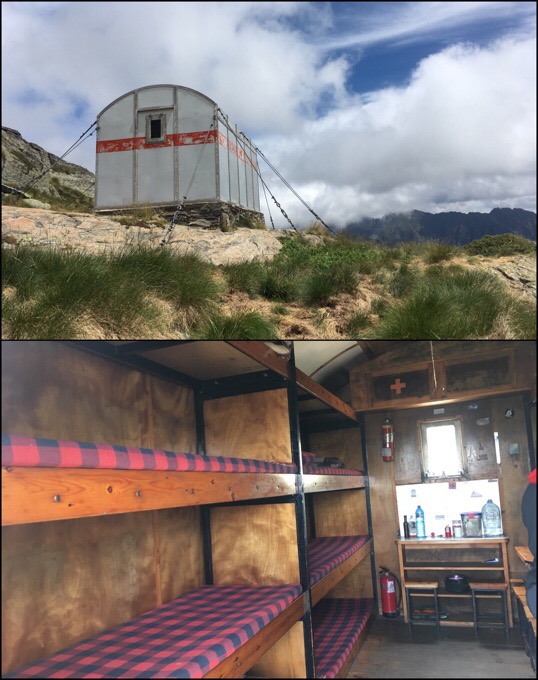 The next two hours of downhill from the refuge were just wonderful, scenic, and relaxing. An extended stretch of relaxed mindless walking out here is so rare out here that when it happens, you are so grateful for it. I felt like I was on the PCT the way it just cruised along and I got to fully extend my legs and get a natural pace going. 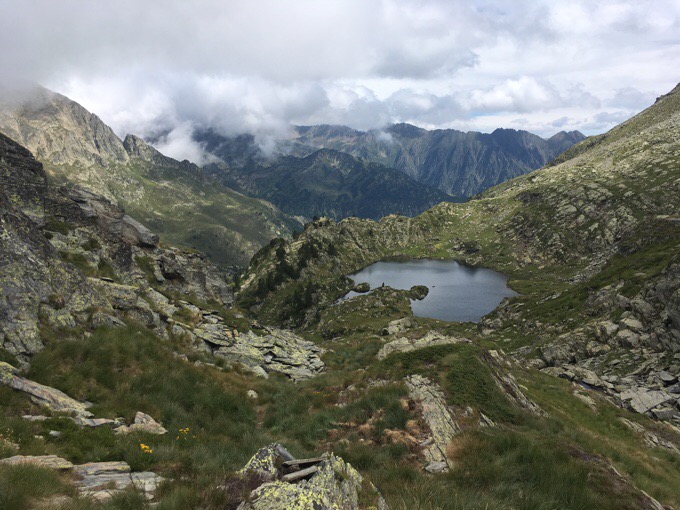 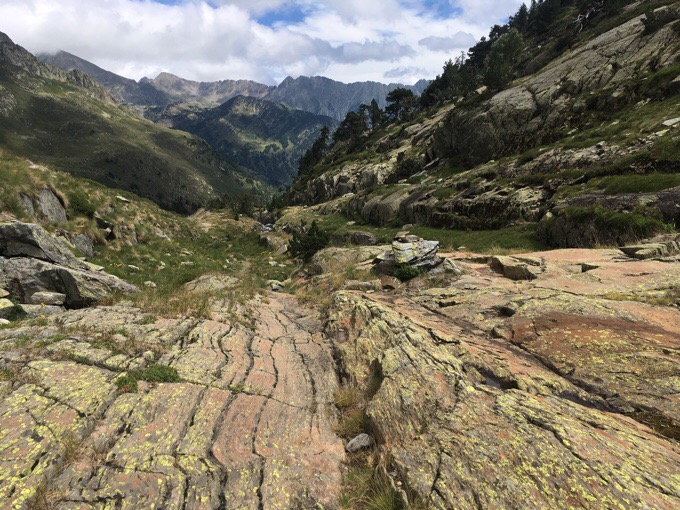 I actually got a bit emotional as I hadn’t realized how much stress I’d been holding on to with the back-to-back climbs and descents that also require quite a bit of focus to stay on route. It felt so good just to relax and mindlessly walk. I listened to two episodes of the Harry Potter and the Sacred Text podcast and one of the Dirtbag Diaries. 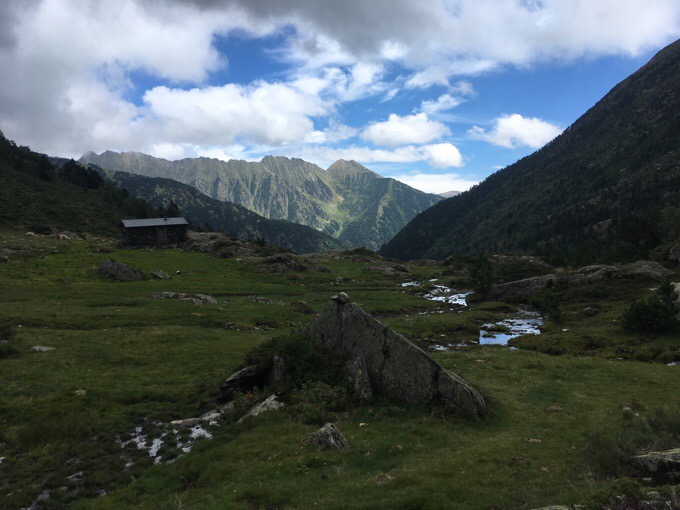 The day ended with some nice wooded walking and then a brief road that then led to a hamlet called Noarre, which is just a grouping of homes that are mostly abandoned. As I approached, I surprisingly got some of the best cell service I’ve had all route! I got excited that I’d have service to post the blog at camp. 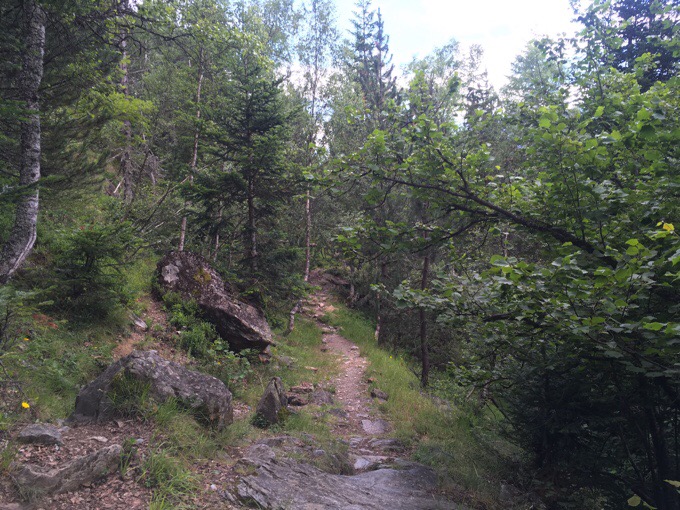 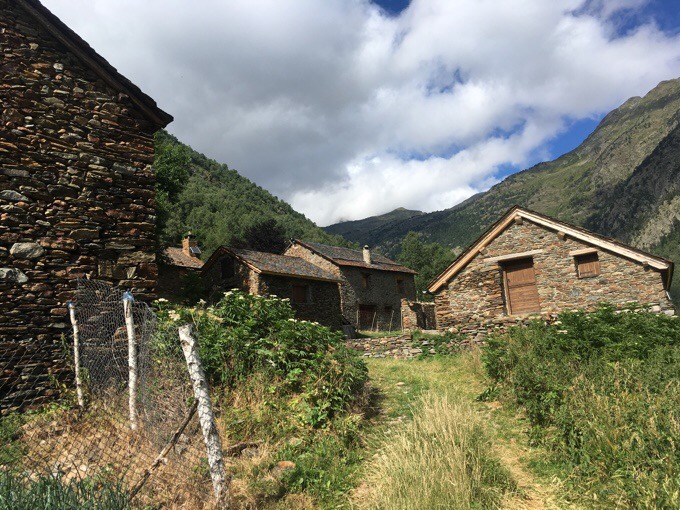 Noarre had a trail sign and a trough with a water spigot. I filled up and headed on looking for camping a bit away from the hamlet, but still watching for cell service. The terrain was a bit angled, so I decided to drop down to a stream bit far from the path. When I got down there the grass was really high, so I crossed the stream where it was better. I’m hoping I’m not where I shouldn’t be. There are old cow patties around and around 9pm a dog was barking when I got out and peed. If he noticed me, I’m shocked, but it’s frightening as he kept randomly barking and I felt like it was getting closer. The stream here is wonderful again and providing just the right amount of white noise to lull me to sleep. 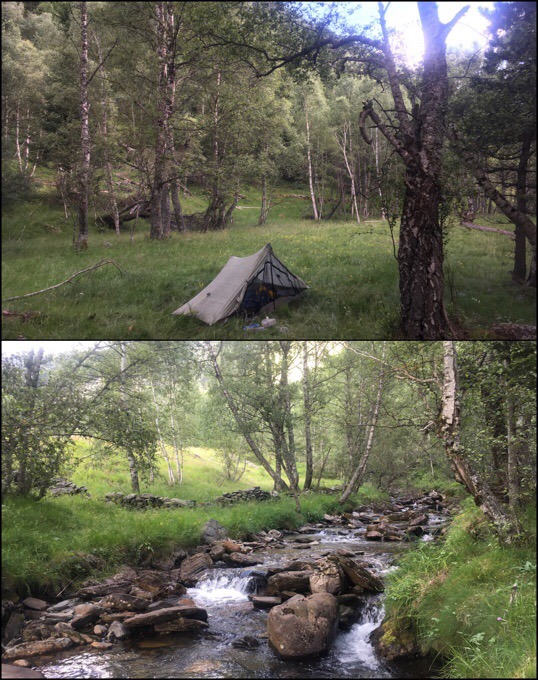 The cell service was so great that I got to Skype with my sister and nephews, and they even had one of our college friends over. I had fun showing them all my Oreos, which they are of course also obsessed with. 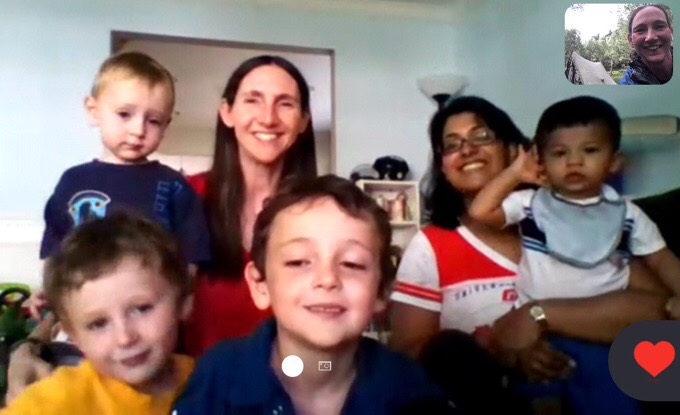 The other fun thing is that I booked an actual hotel room all to myself for three days from now in El Serrat. I was trying to skip that stop, but it was too great to pass up. I got my own room with breakfast, lunch, and dinner included for a great deal. It’s been a tough four days and I have three more until I get there. I’m excited to treat myself to 24hrs of chilling out…and a shower. Plus, with all this unexpected cell service I will be ready to recharge. There still isn’t a resupply point for a couple days after that, which is when I had intended to stop, but I need the break. This has been a lot of work to do for what will be a week straight by the time I get there. Plus, I may have underestimated my food as hiker hunger seems to have suddenly kicked in. This stop with meals will help a lot with that. What a great day!