I know this summer in Europe ended abruptly. Well, here’s a nice long rambling post to make up for it, ha! Hey, I need to process this just as much as all of you. Believe me, I totally didn’t expect to leave so suddenly either. I saw the weather coming, and figured it was a front that would blow through and I’d still get a window in the following two weeks to finish out the handful of days I had left on the Walker’s Haute Route in the Swiss Alps. It just wasn’t going to happen, and there’s nothing to be done about unexpected weather. I have no regrets whatsoever and know it was the right decision. The weather that hit wasn’t going anywhere, and I had already completed all I hoped to do this summer. The Haute Route was a bonus.

It’s interesting that this year of all years ended this way because I’ve always envisioned my European ventures as a long term project. One that is much more relaxed, and I could just piece together what I was in the mood for each year. Then return the following year to pick up where I left off. It’s all one big trip with months of zero days thrown in between. I’ll be back, and it feels good to have a long term project I’ll be returning to for years to come. I do wish I had known my last night in my tent would be the final night. Now that I’m home (and already back at work substitute teaching), it’s hitting me how sudden it was. I feel like I didn’t get to process the transition home in the way that I usually do. I wouldn’t say it’s a bad thing, just a different feeling.

After the last 15 months, in which I was thru-hiking most days (I had a two month break before Europe), it feels pretty amazing to be home and in my comfort zone. It is a reminder of how fortunate I am to have such a fluid life and routine that fits so well into this lifestyle. The fact that I can make a last minute decision to go home two weeks early, and have a home and job immediately ready for me upon my return makes me feel like I’m doing something right. It just fits and is such a comfortable routine. I’m very grateful.  I’m also very excited to take a break from nightly writing, haha!

A great perk of ending early is that when I changed my plane ticket, my flight out was moved to fly out of Paris instead of Geneva. Back when I started the summer in Paris, the one thing I wanted was a photo with a Wired pose in front of the Eiffel Tower. While I was with my friend Allgood touring Paris, he took the perfect shot that I was really excited about. Then, the next day, in the process of clearing memory from my phone, I deleted the photo! It really really was a bummer. I was sure to get a new photo when I went back through Paris on the way home. Even though the area of the original photo was blocked off for repair, I was still able to get a good shot further away…and it had the clouds very similar to the original photo that I loved! We all know how I love it when things come full circle! 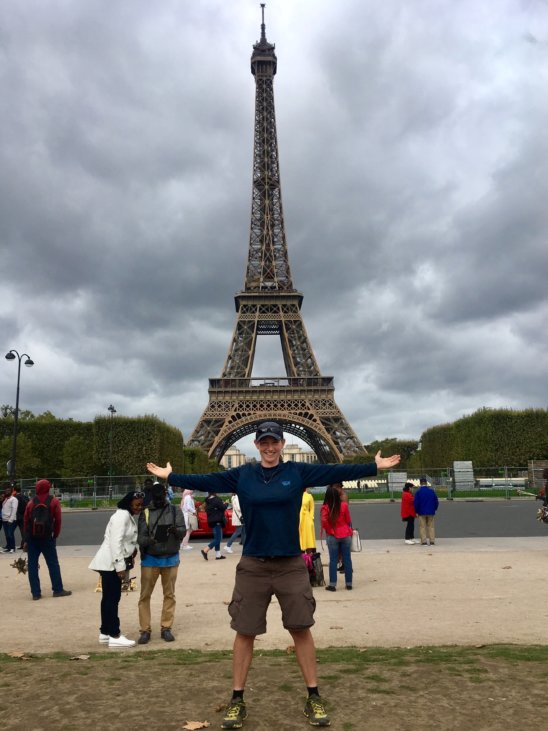 As for my thoughts on hiking in Europe, I’ve speckled in some thoughts as I hiked this summer, but I’ll go through it all briefly here to have it all in one place. I really took to European hiking! Many warned me I might not like it, and I agreed that on paper, some things made me wary. I was told I wouldn’t like all the people, I couldn’t use my tent, it would be expensive, the hiking isn’t as remote as I would like, and I wouldn’t like the food. Maybe it’s just the timing of where I am in my hiking and personal development, but this summer was my most enjoyable summer thus far!

Hiking in the Pyrenees, French Alps, and Swiss Alps are by no means physically easy. People often recommend hikes to me, but know that I’m prioritizing hiking more challenging terrain and routes now, while my body can more easily enjoy physically demanding terrain. Comparing the three, I’d say the GR5 (French Alps) is the best blend of everything, and some of the most enjoyable hiking I’ve ever done. The Pyrenees and Swiss Alps have amazingly rewarding scenery often beyond that of the GR5 in the category of grandness. When I look at the photos, I can’t believe I was there, but it has to be warned that they also have much steeper, rockier terrain that can detract from the overall enjoyment. On all three ranges, I loved the ease of carrying very little food, and having shelter options often multiple times a day (I did hike more distance than most would prefer in a day) if bad weather moved in. I felt so spoiled after having learned to thru-hike in the US, where there are often long periods between food resupplies, water sources, and shelters.

Walking through a village almost daily on some of the trails was a luxurious perk in my opinion. Maybe it was the minimal amount of long concrete roads, cars, and people, but villages felt very different from walking through an American town or city. That would really bother me. Villages felt very natural and were an enjoyable part of the hiking experience. Plus, having cell signal much of the time, was pretty nice. I found all routes pretty easy to just grab a guidebook and jump on if you’re an experienced thru-hiker. That was relaxing.

Overall, I have to say that Europe has come at the perfect time in my life and hiking career. I’ve reached a new level of peace, calm, and contentedness that I didn’t know I’d be capable of. I’m not going to start meditating or doing yoga anytime soon (or ever!), but I’ve found the perfect Wired-esque bliss and am just pretty dang happy and grateful.

So, many of you are wondering where we go from here. I do feel like there’s been a progression over the years, and that each trail has naturally led to the next. Offering new challenges and experiences that push me just enough out of my comfort zone for a challenge that brings reward and growth in many ways. Along the way, there have been little leaps at times to a next level that may be just out of reach, but I hope are not. This coming spring may be the leap with the biggest unknown for me to date. One that I never imagined attempting and am in such awe and impressed by, that it doesn’t seem real. This coming April, I’ll be attempting the Great Himalaya Trail spanning the width of Nepal. Oh man! 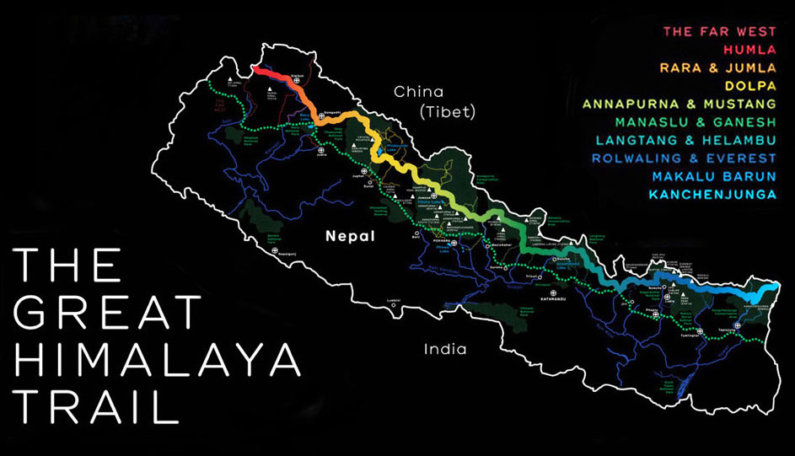 I’m not going to go into too much detail right now, other than to say that this is a route that is well traveled in sections, but it will require some luck with weather and health to complete it all in one go heading east to west over about 2.5 months. This is definitely not a trip I would want to attempt on my own, so you all will be happy to hear that Griggs (who I hiked with the last 1.5 months of the Te Araroa in NZ and Tasmania last year) will be joining me! Griggs just completed the Continental Divide Trail and will be doing even more hiking before Nepal, so be sure to follow him on Instagram. 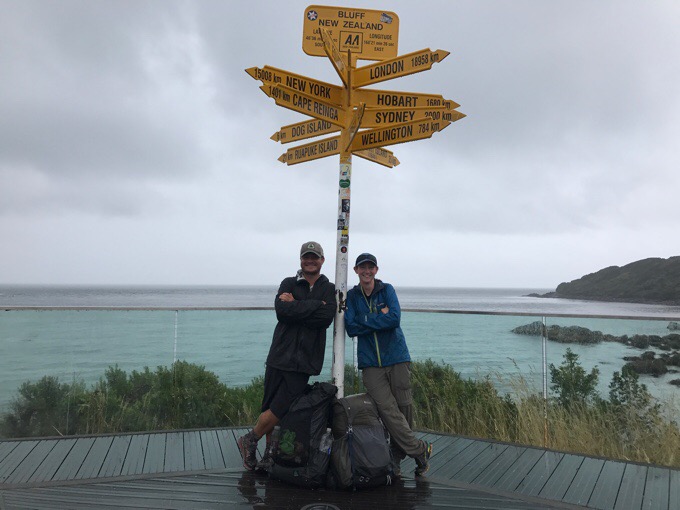 Griggs and me at the end of the Te Araroa.

We have a third person joining us as well, who is a good friend of mine, but he is not ready to be public with that announcement just yet. The idea behind having three is twofold. Having three is recommended for all that can happen in the Himalayas. Also, knowing my history with acclimating to elevation, there is a chance my body may not take to this trail (many passes are well over 16,400ft/5000m), and I may have to bail and do the shorter circuits. Having three people gives the option for the other two to still continue on if one needs to drop out for health reasons. I have to say, I’m pretty stoked about this solid team we have, and it’s going to be a great experience no matter what the result. We are going into this with the attitude that we’d rather attempt a thru-hike and accomplish what we can within our abilities than to do the more traditional loop hikes and out-and-backs. We are all thru-hikers at heart that enjoy a challenge, and this is definitely it.

I hesitated to mention the GHT because I know there will be many questions to follow with how little is known about it. However, I also knew I’d just be asked repeatedly, “What’s Next!?” I won’t be answering questions about the GHT until closer to the spring. For anyone wanting more info on the Great Himalaya Trail, know that there is a lot of general advertising out there from various guiding companies with little quality information and some of it misleading. The three of us are in contact with the right people and have hiking acquaintances that have completed either the high route that includes technical passes or the lower route option, which we will be doing that bypasses the 5 technical high passes at the points where mountaineering skills would be required. Our contacts have been very helpful in giving us the information we need, and most importantly, assuring us that this is within our range of ability. Seth Wolpin, co-founder of Himalyan Adventure Labs, and part of the first team to complete the GHT high route traverse in 2014, has been very helpful, and I want to thank him for that. We were put in touch through mutual friends. Here is a good link to start from that Seth has created for anyone wanting to find more information on the GHT.

Anyone doing the math will notice that I will still have the summer months available to do more hiking after the GHT. It will most likely be Europe. What exactly will depend on many factors, and if the three of us on the GHT plan to spend summer together as well, or head out on individual ventures. All of that will be worked out in future months. All I know is that no matter what’s to come, 2018 looks to be quite an exciting year! As always, it’s been great to be able to bring everyone along on this journey we’ve been on since 2011, and I thank you all for being so supportive. Now time to hermit in my hoodies! Wired out!